3:00 am and we’re on Lake Onega, the 2nd largest lake in Europe (4,000 square miles). We’re heading to Kizhi Island, at 62 degrees north the 3rd farthest north I’ve ever been (Fairbanks and Reykjavik at 65 degrees north). It’s now also much colder – gonna need the woolies today. And we’re trending toward White Nights – almost to 24 hours of daylight here . . . 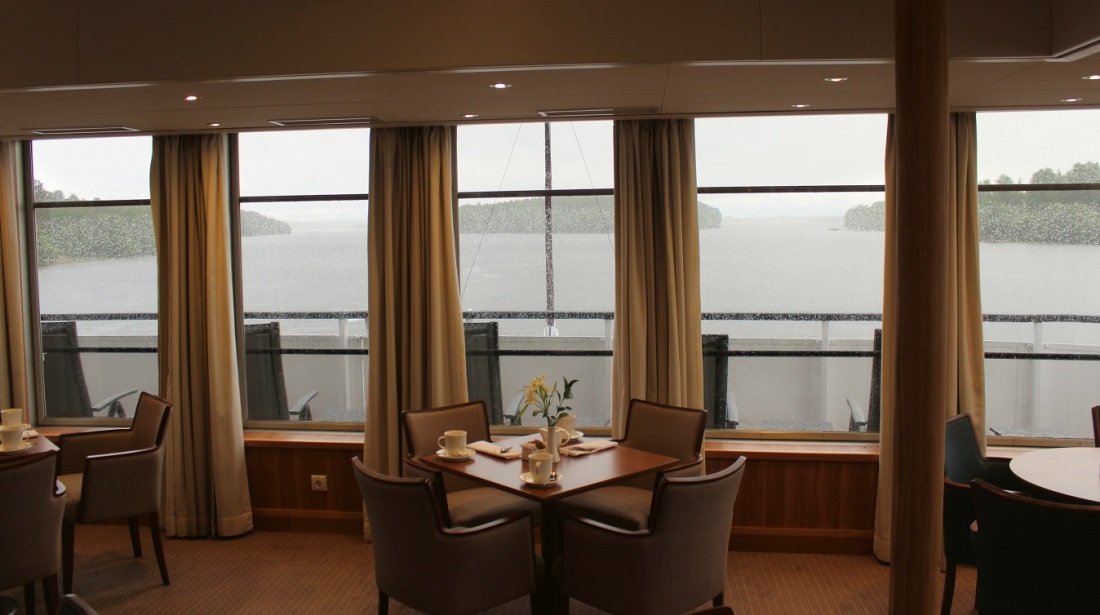 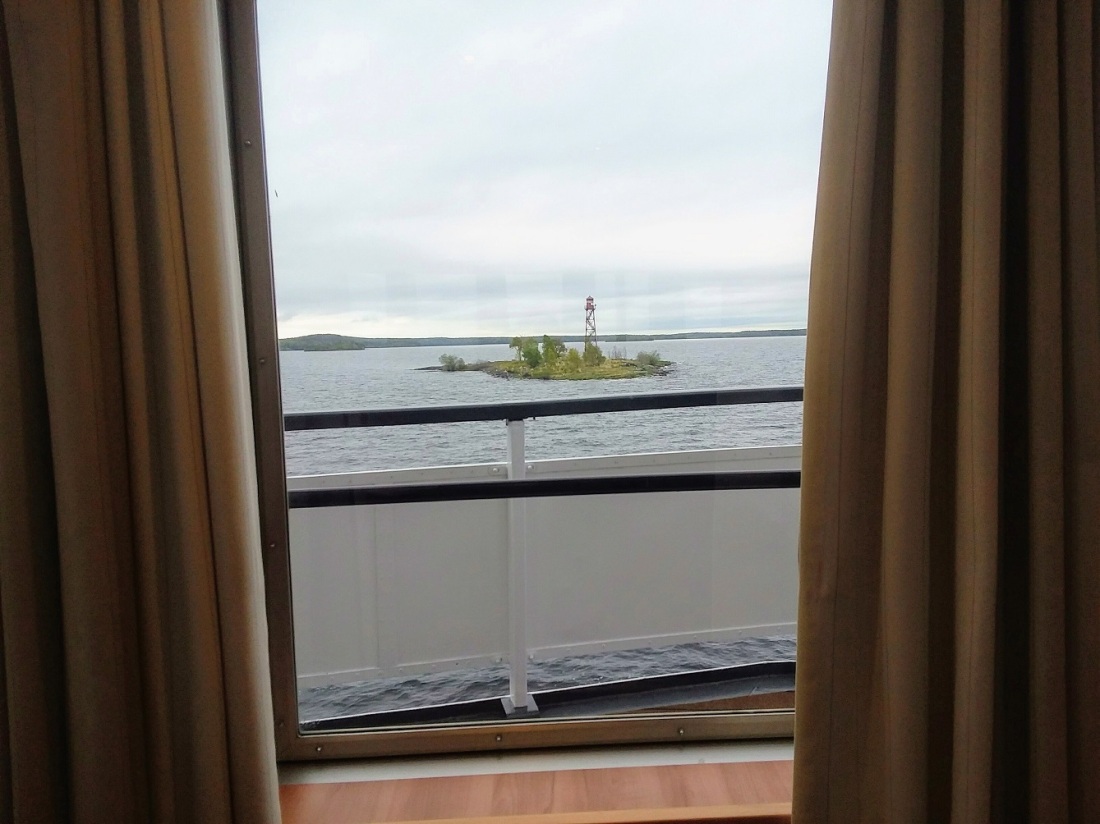 [Whereas Mandrogy made no pretense of being anything other than a tourist trap (and they should be trapped every once in a while), Kizhi is the real deal.  Kizhi is an island near the geometrical center of Lake Onega in the Republic of Karelia. It is elongated from north to south and is about 6 km long, 1 km wide and is about 68 km away from the capital of Karelia, Petrozavodsk.  Settlements and churches on the island were known from at least the 15th century.  In the 18th century, two major churches and a bell tower were built on the island, which are now known as Kizhi Pogost.  Nowadays, the entire island and the nearby area form a national open-air museum with more than 80 historical wooden structures. The most famous is the Kizhi Pogost, which is a UNESCO World Heritage site. (Wikipedia).] 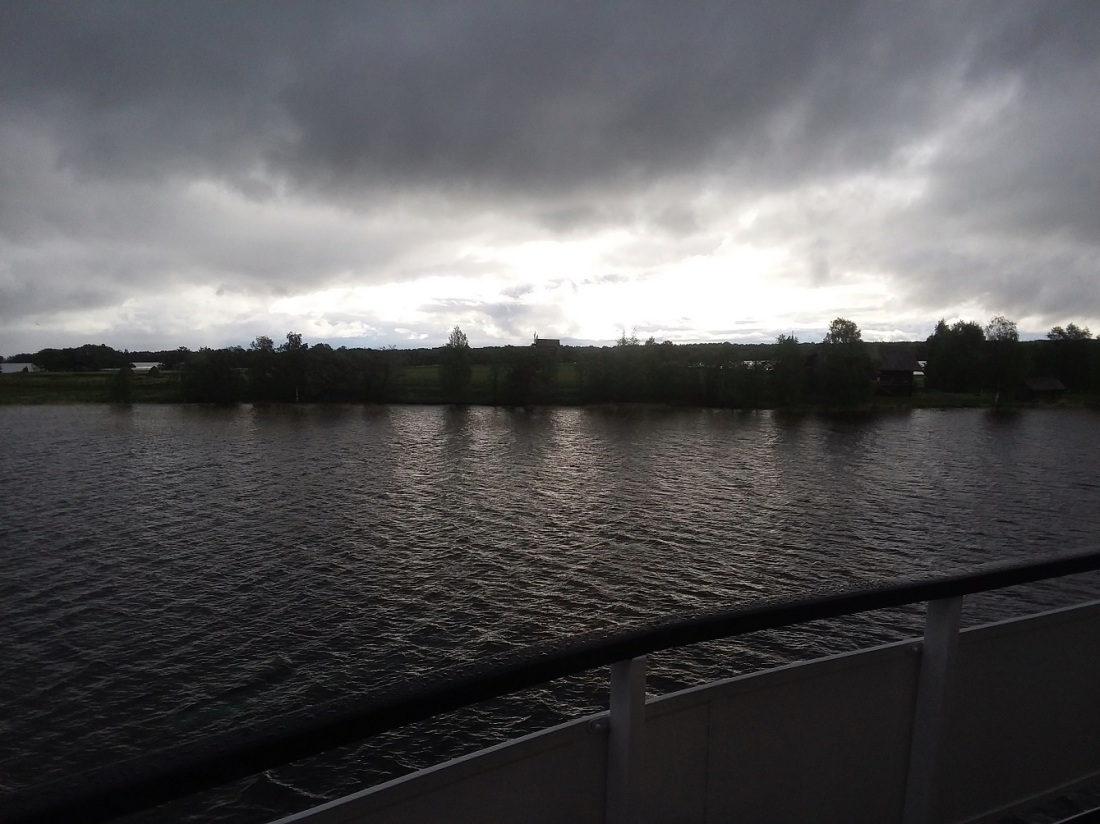 [On the ground, did I mention it was cold and rainy?]

[And there is our destination.  The light created by the changing weather was perfect here – the church appeared “lit” against the dark cloud background . . . ]

[The church is the last surviving original example of an elaborate form of north Russian church architecture consisting of ascending octagonal tiers buttressed with rectangular extensions at the points of the compass. The various components of the pine log structure are crowned with barrel gables, which support cupolas covered with aspen shingles. For the 22 cupolas of the Church of the Transfiguration of the Savior there are some 30,000 shingles, which were replaced in a restoration during the 1950s. The shingles are cut in a curved form to fit the contours of the cupola frame and are wedged into place beginning with the top row, which fits into a neck at the base of the cross (www.wdl.org). As is obvious, the church is currently undergoing another restoration.]

[In 1714, the 22-dome Transfiguration Church was constructed and soon after the bell tower was added, thereby completing the Kizhi Pogost. The bell tower was entirely rebuilt in 1862 (Wikipedia).]

[Not an easy makeover, the scaffolding alone is an architectural wonder . . . ] 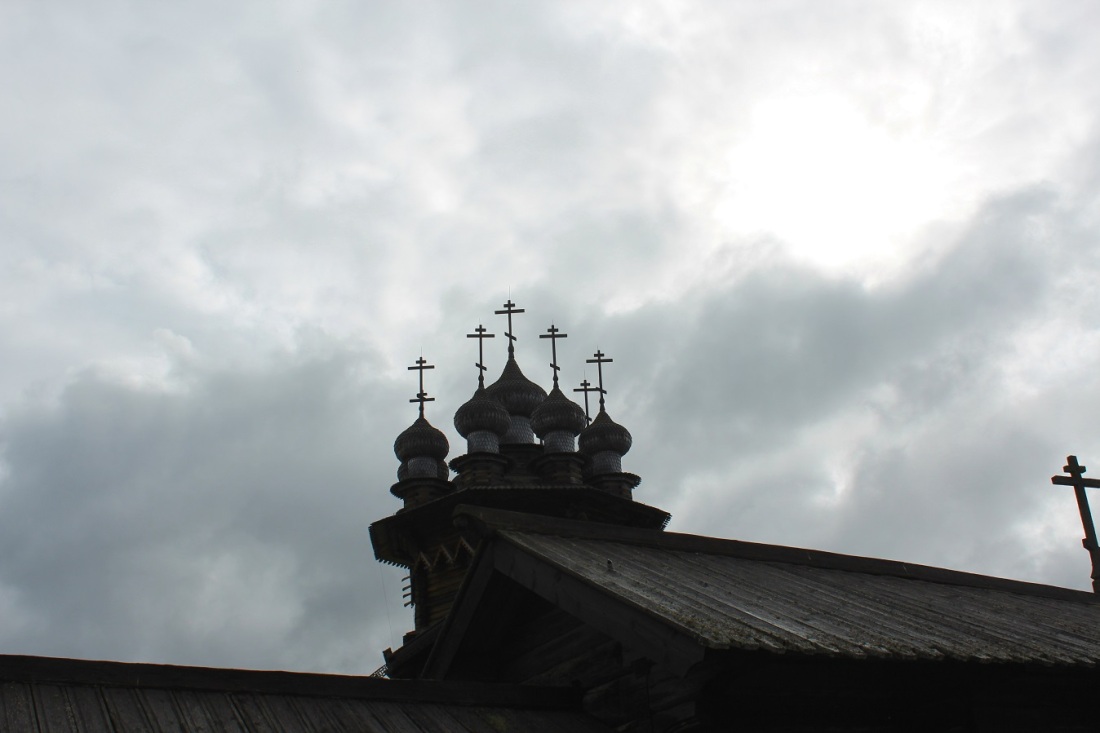 [An amazing place considering its isolation . . . ] 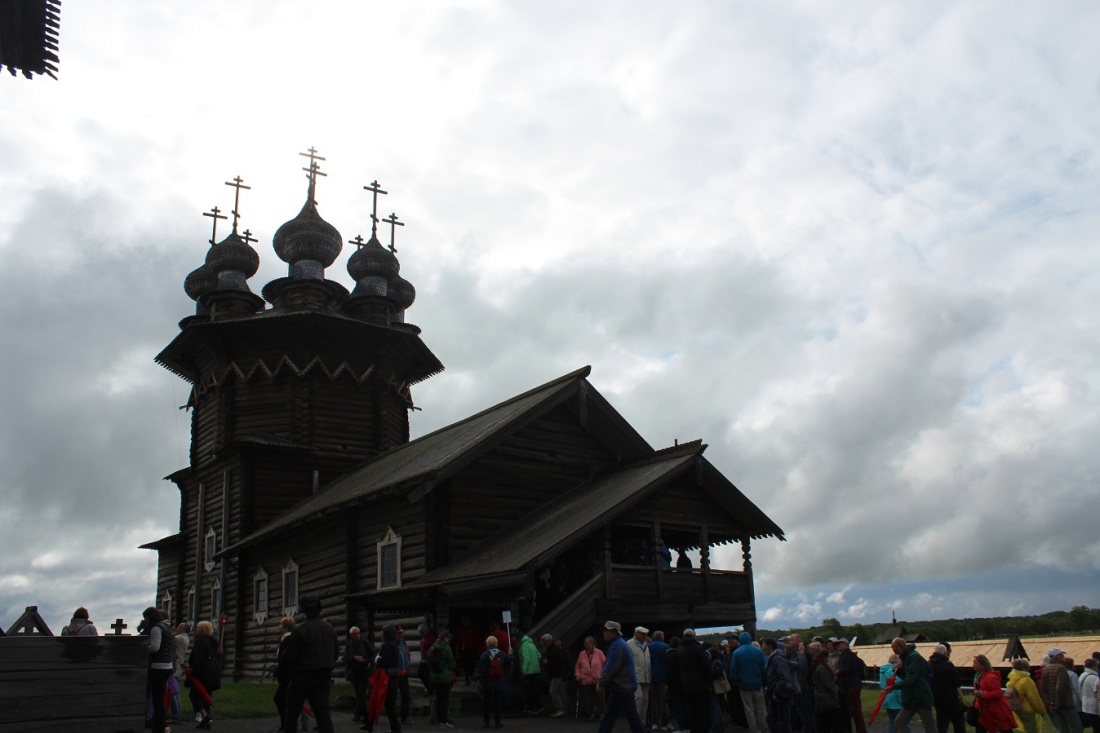 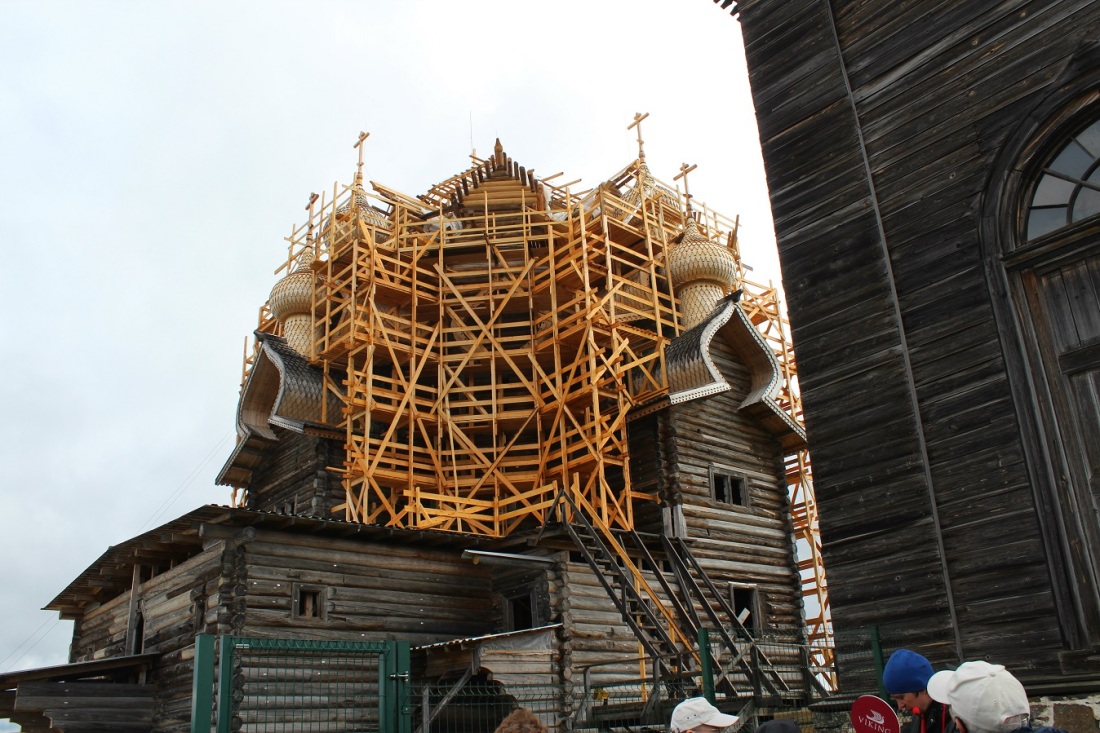 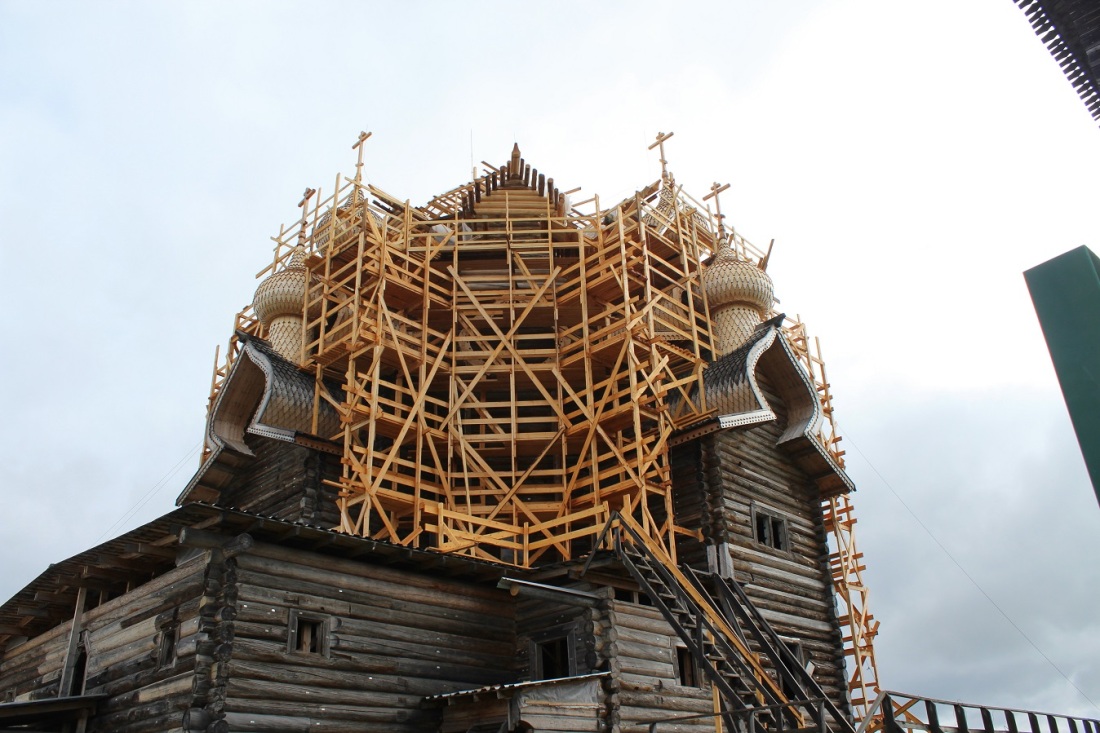 [Our youngish guide was obviously very proud of this historic building . . . ]

[Tom was digging it too!] 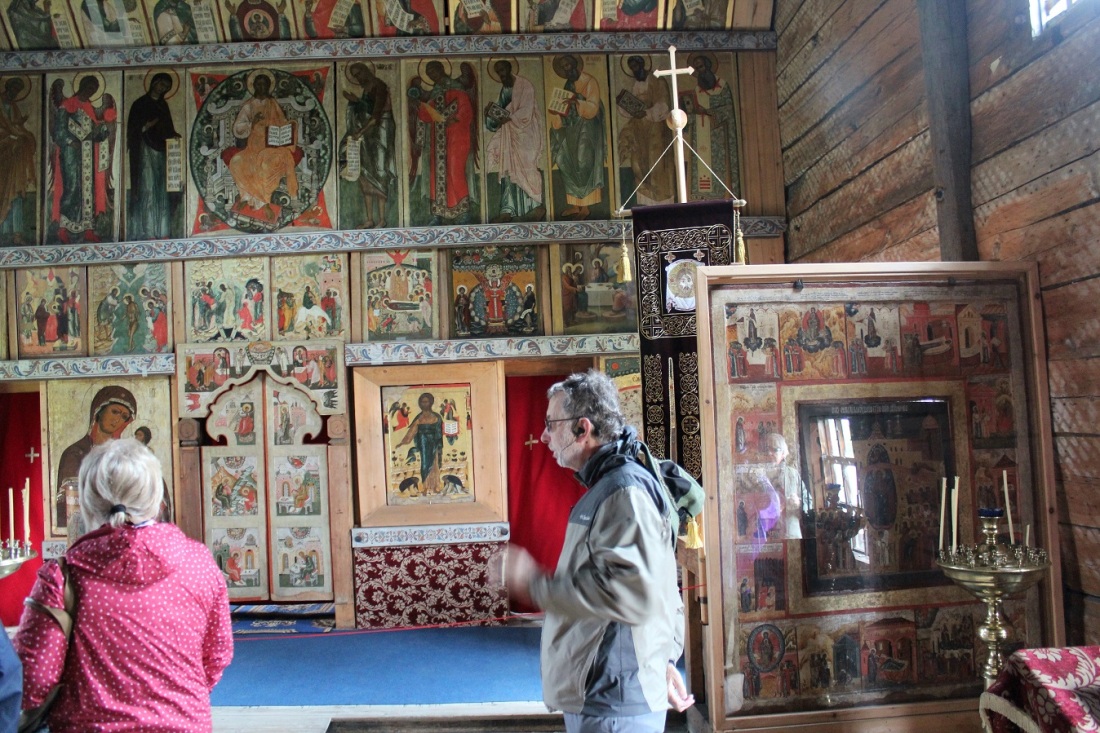 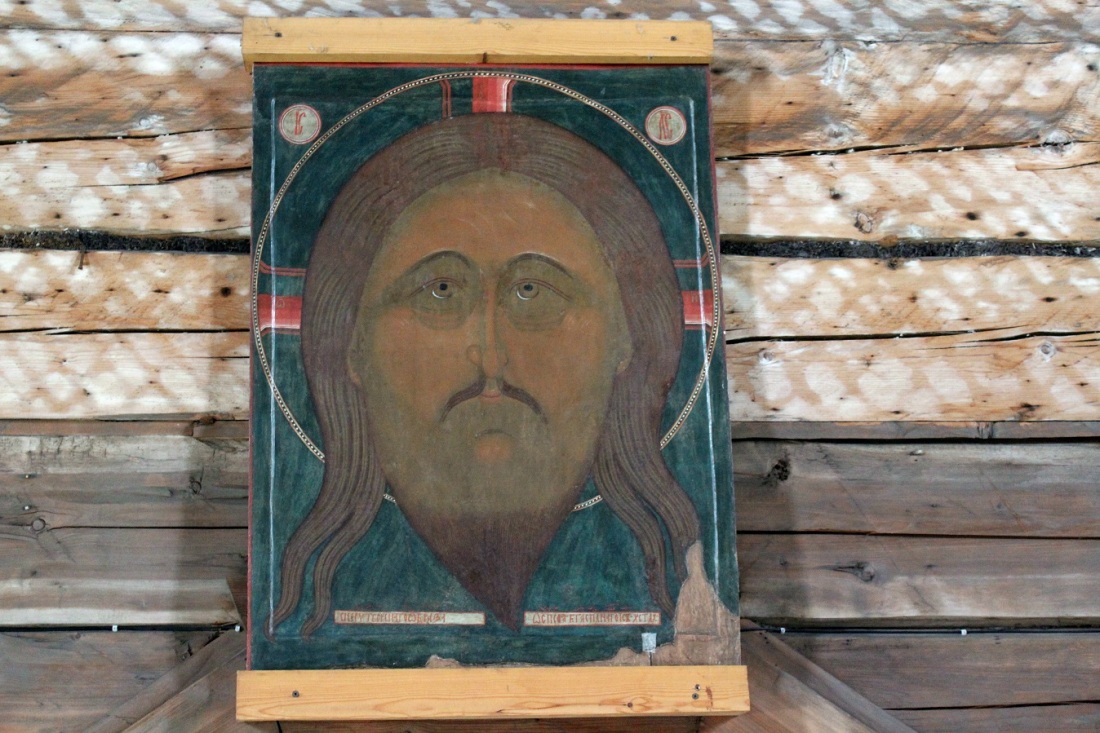 [Our guide gave detailed reports of the structure’s original design and how it’s being restored . . . ]

[It was an elaborate explanation, I believe I understood at the time, but now I don’t recall the specifics – something about upgrading the foundation?]

[And this was an overview as to how these buildings were designed to be comfortable during the long, cold winters . . . ] 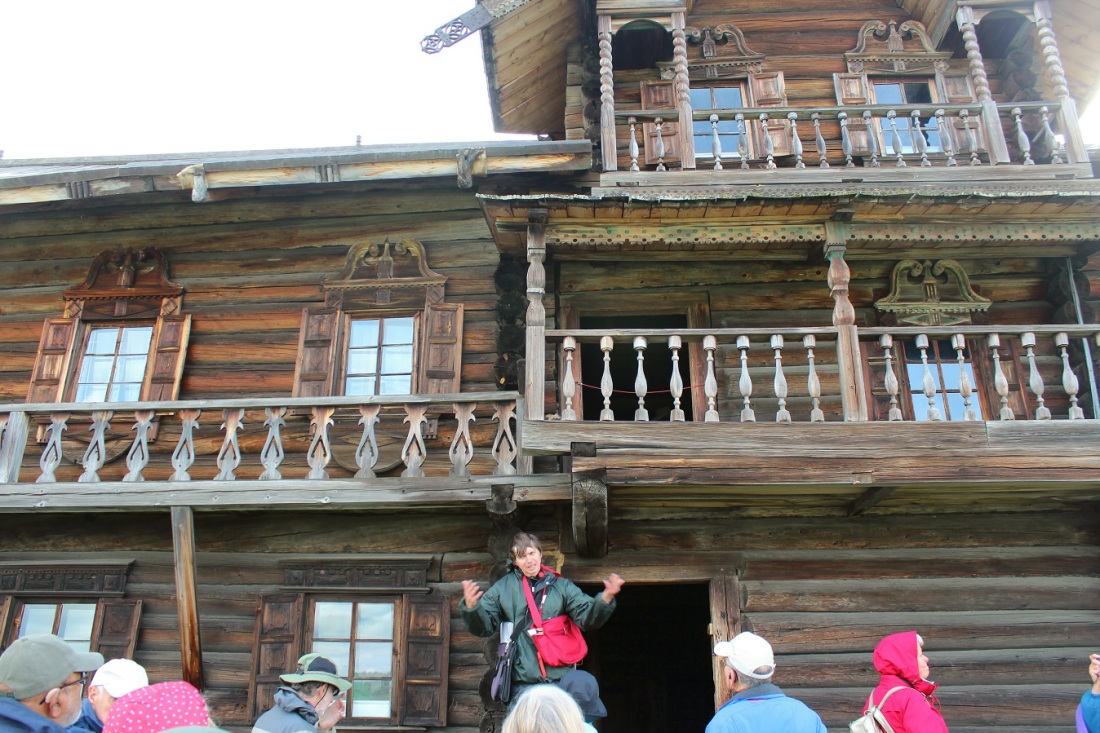 [Maybe a little too cozy inside?]

[A parting shot, sharing the stage with passengers from another boat . . . ] 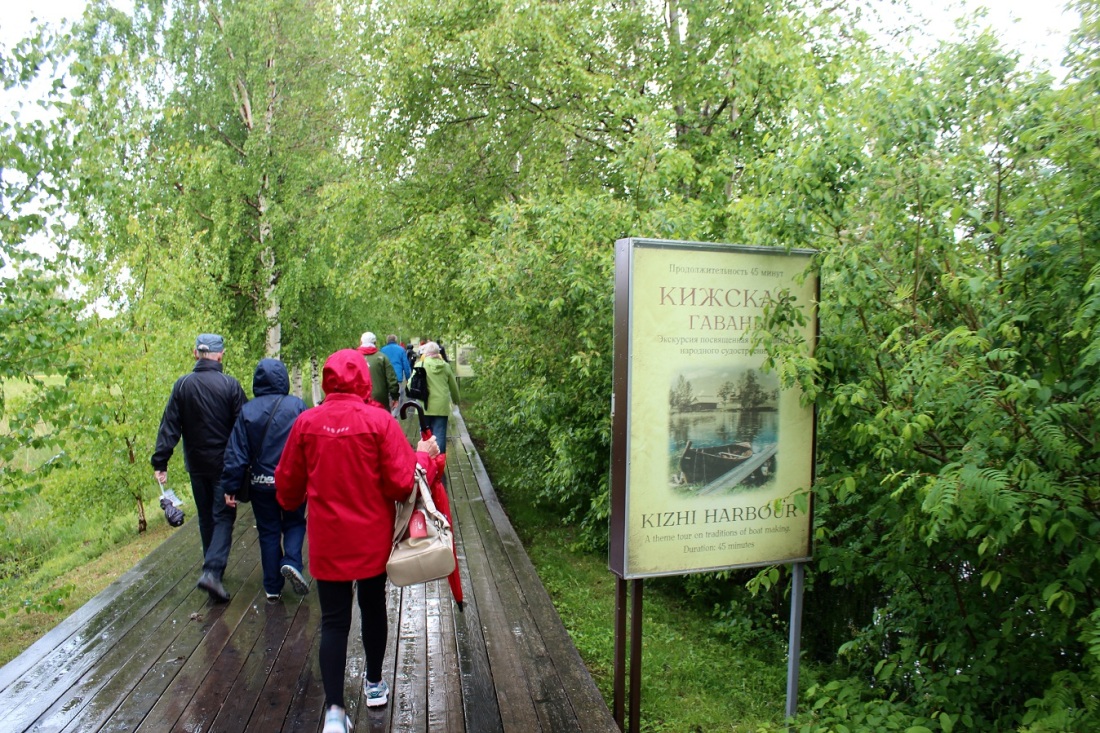 [An invitation to a PAR-TAY!] 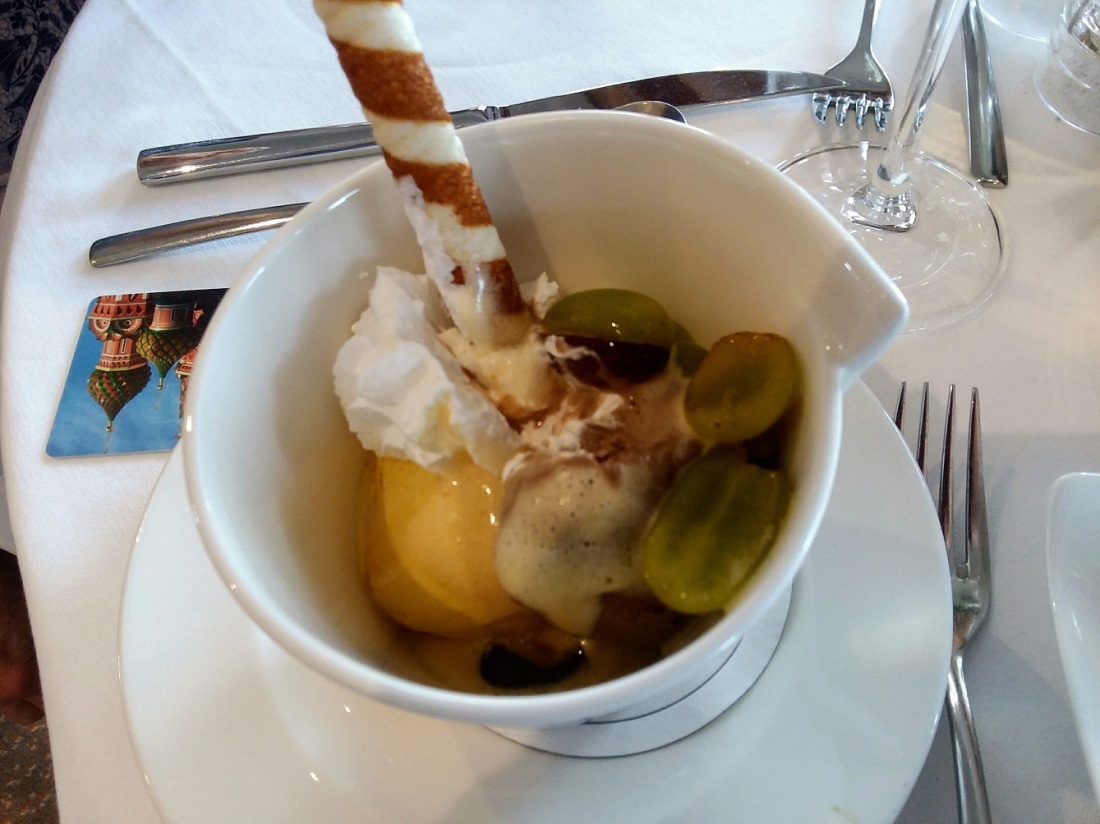 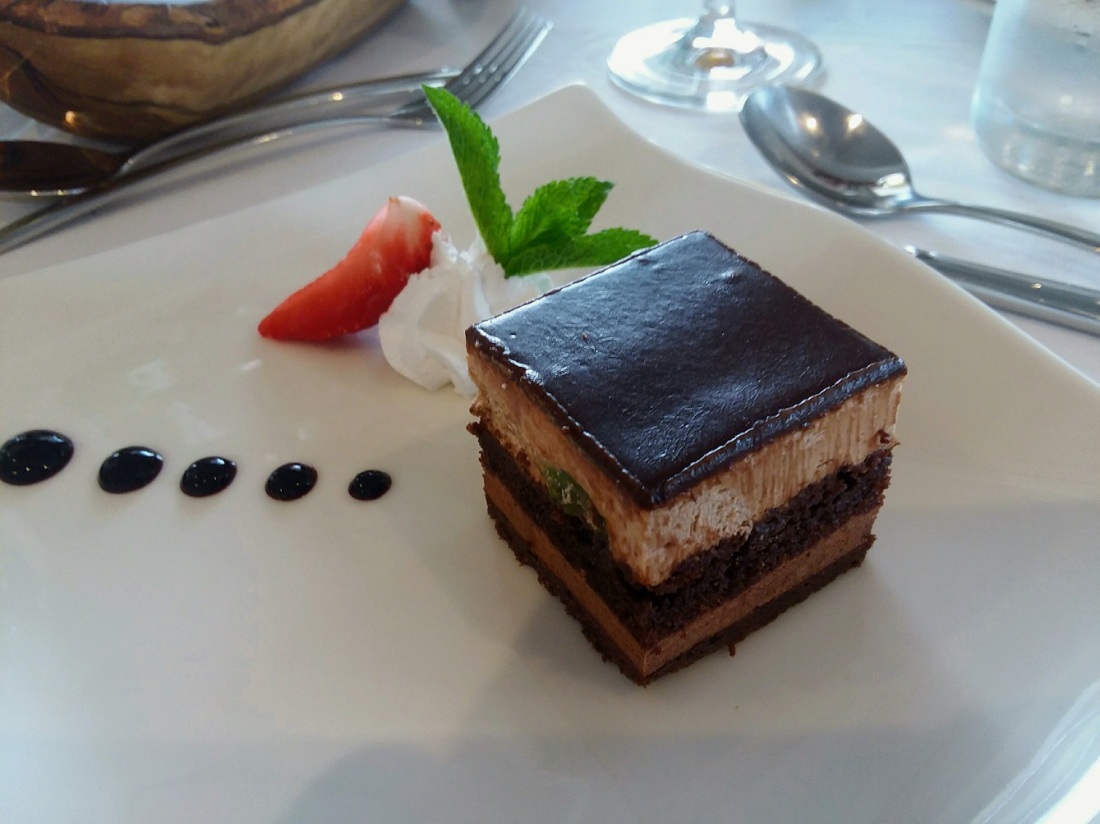 [An invitation to the bridge of our Viking Akun. My technical question was how often do they have to change wiper blades. 5 years. I guess they don’t have to drive on salty roads?]

[The captain knew enough English to grin at my question . . . ] 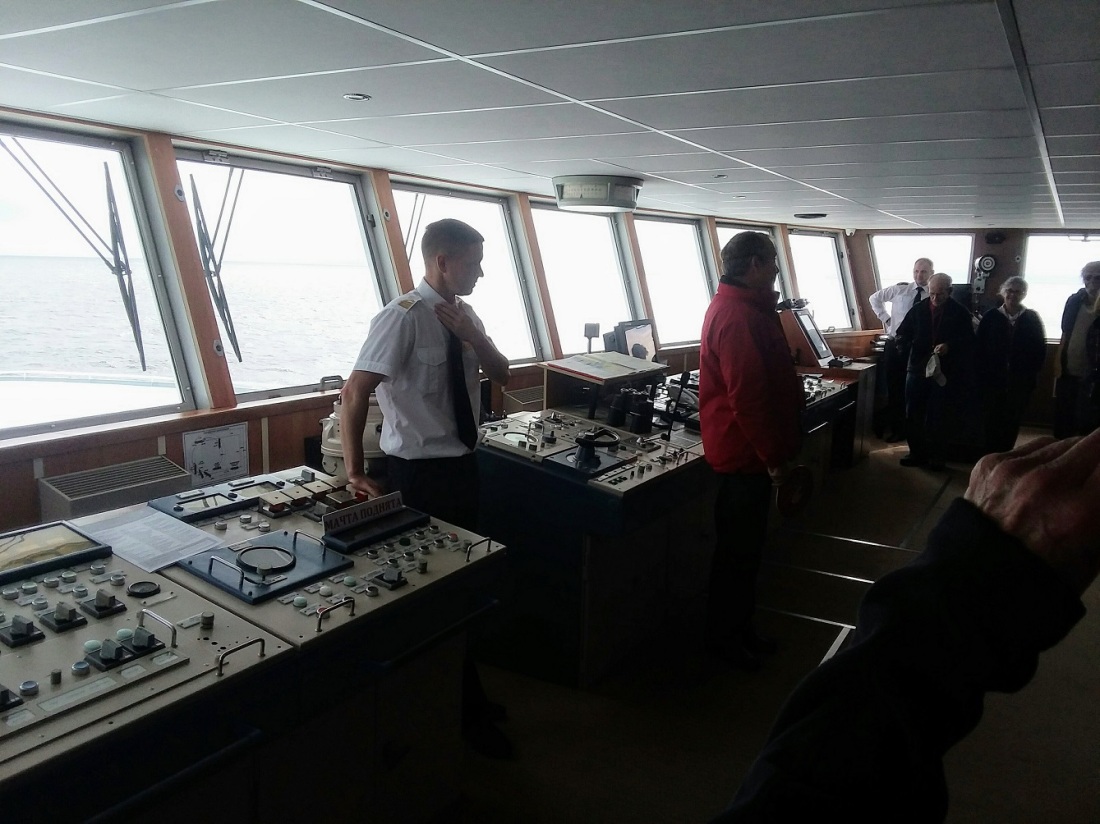 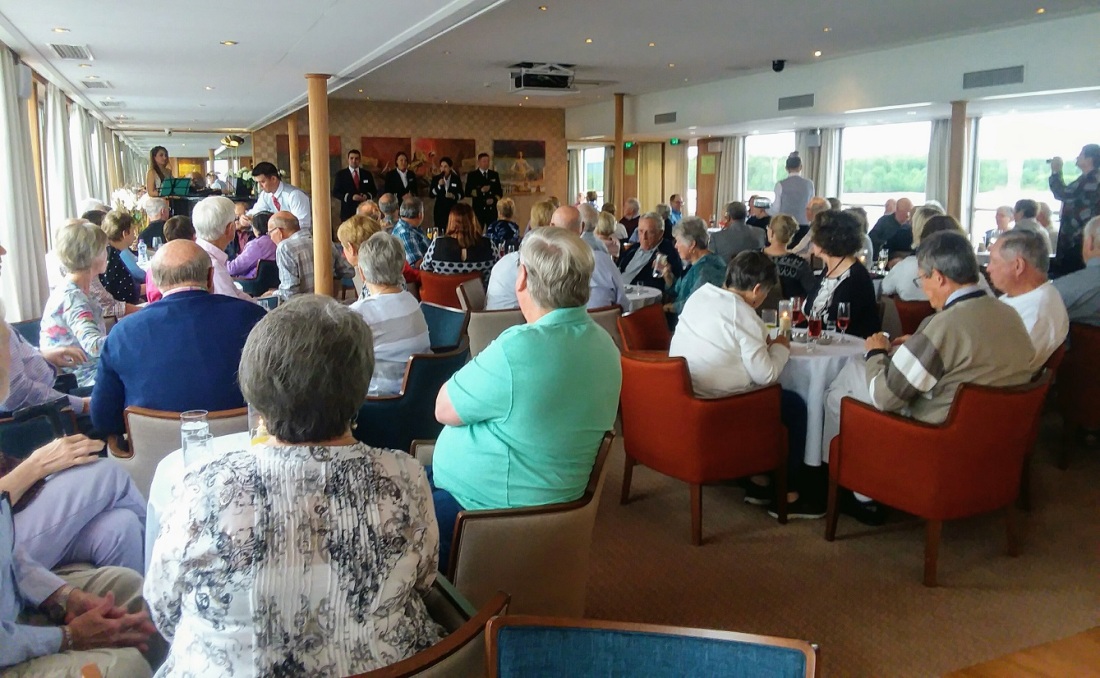 [As usual, an ending for your dining and dancing pleasure . . . ]