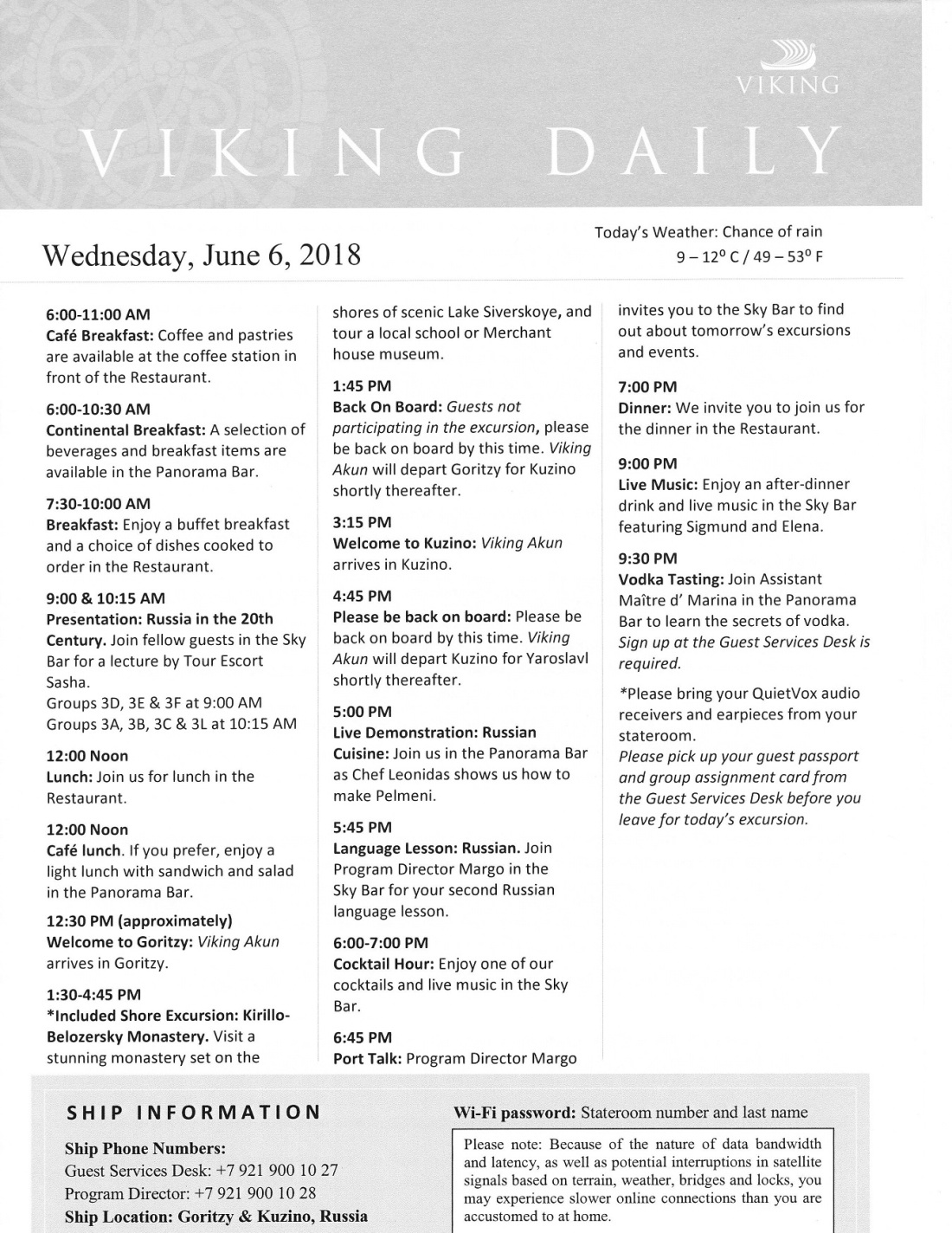 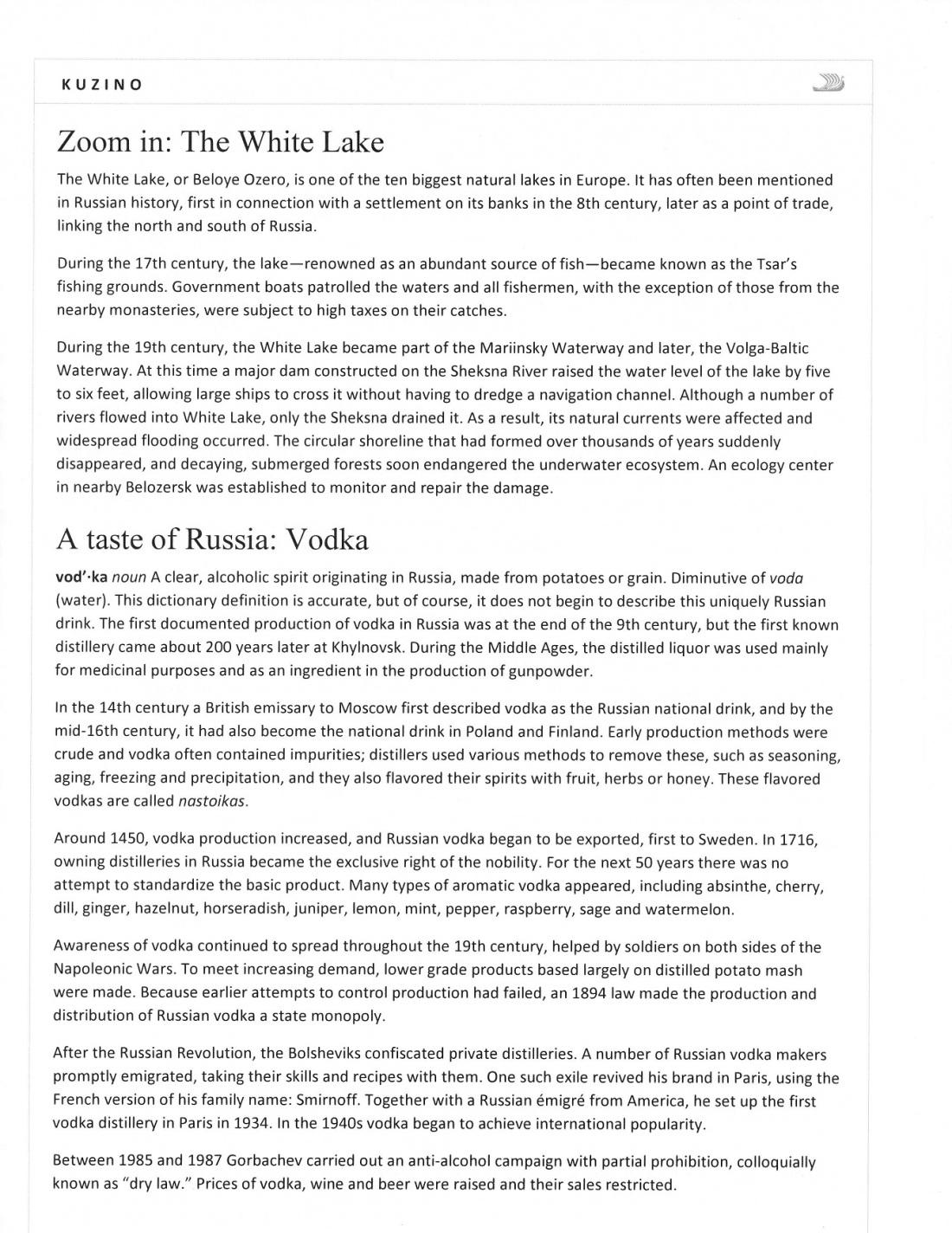 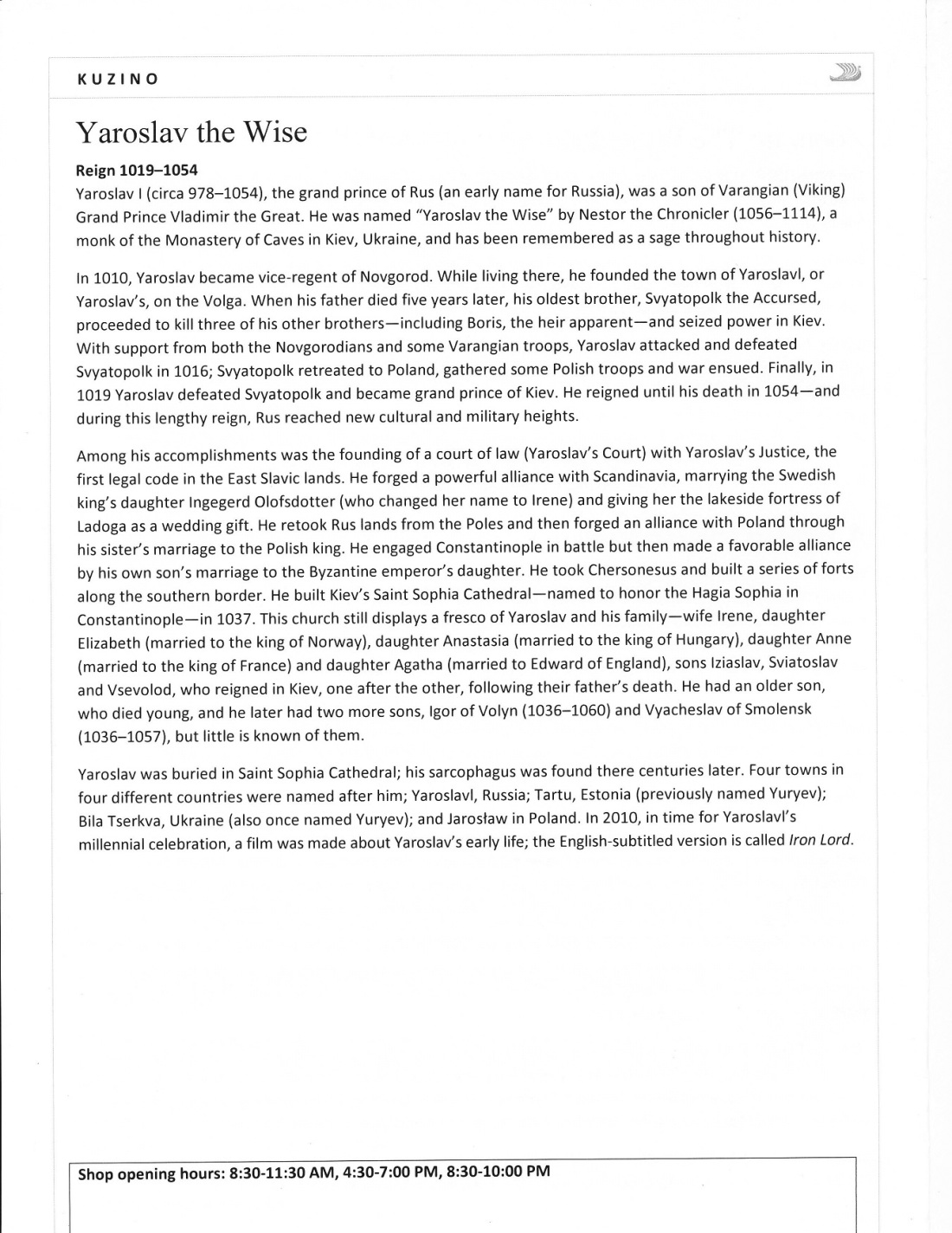 [Heading into another “can’t see across” lake this morning. Lake Beloye (White Lake) is the 7th largest lake in Europe at 440 square miles. It’s part of the Volga-Baltic waterway as we’re heading south now, ultimately to Moscow.]

[A teaching session by Sasha.  We really enjoyed the Russian history lessons.  Sasha differed somewhat from Russians in general.  He thinks Gorbachev was the most important leader of the Soviet Union.  One of his peers, can’t remember if it was Alexey or Vadim, think it was Yeltsin because he brought capitalism to the country.  I’m in the Gorbachev camp, thinking he was one of the most important people of the 20th century.  But then I’m just a retired guy from Alex . . . ]

[The Church of the Nativity in the village of Krokhino.  For 50 years, it has been surrounded by water after the village was flooded during the construction of the Volga-Baltic Canal in 1964 (www.rbth.com).]

[[I]n 1964, during the construction of the deep-water Volga-Baltic Canal, the water level in the Sheksna River was artificially raised – and the village was submerged by the lake, leaving only the white-stone church rising out of the water (www.rbth.com).] 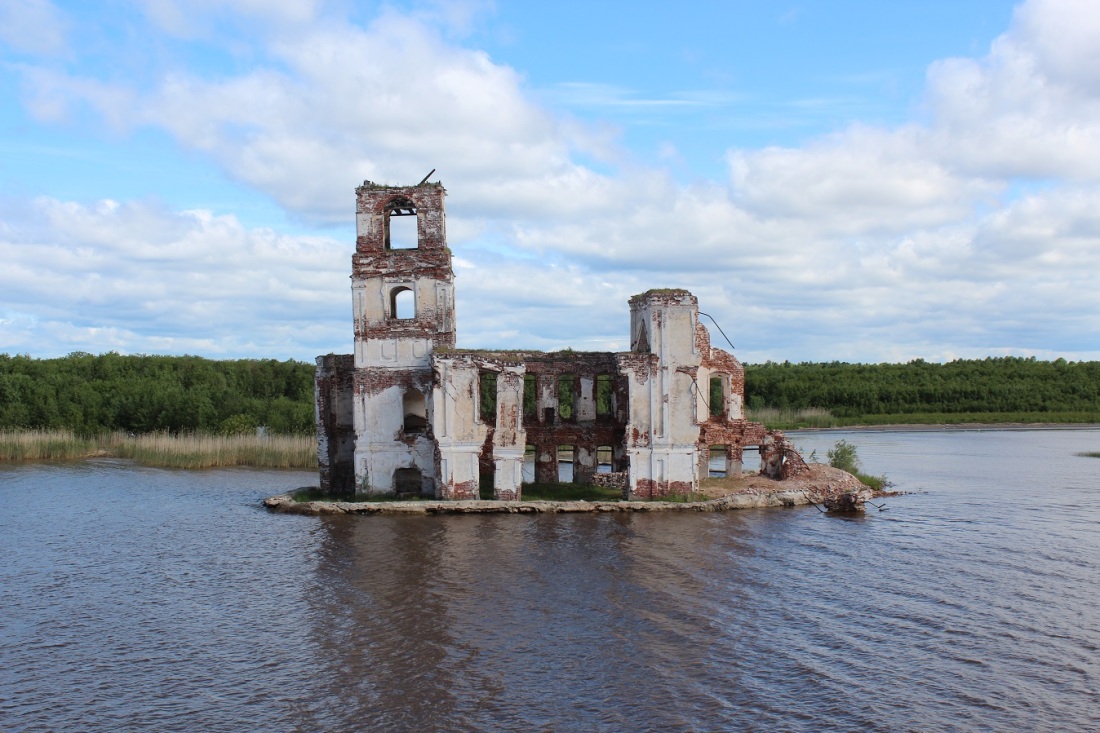 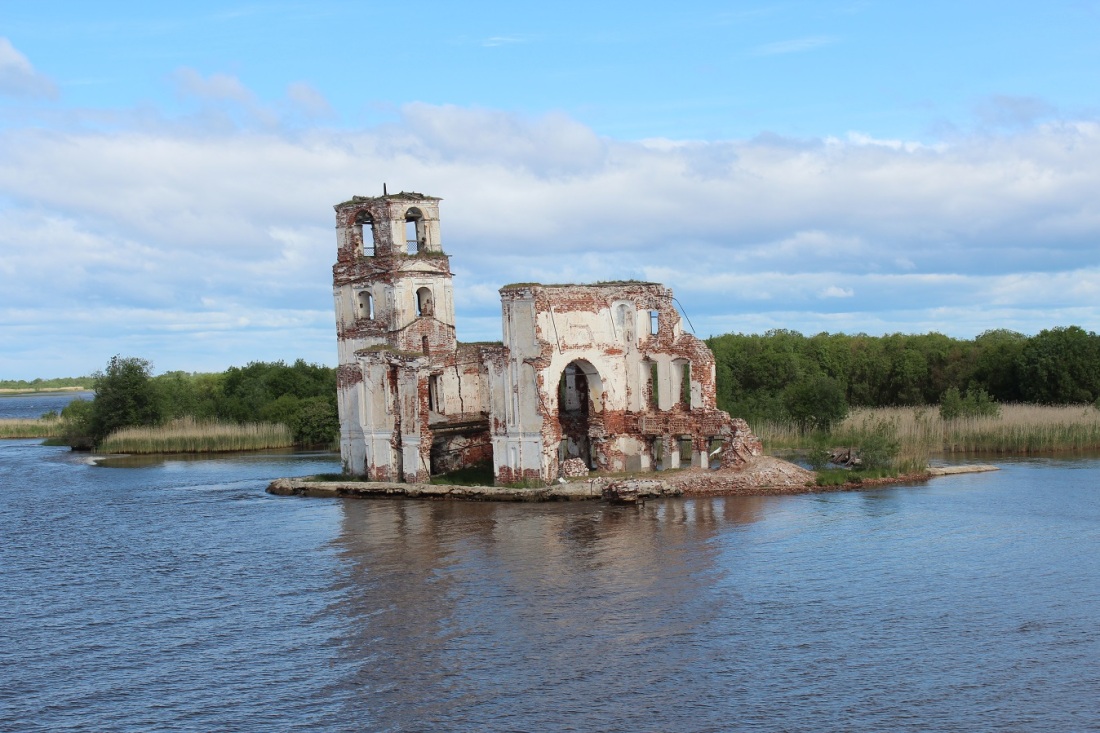 [In Goritzy, a merchant house museum – the person standing in the door will be identified two photos down . . . ] 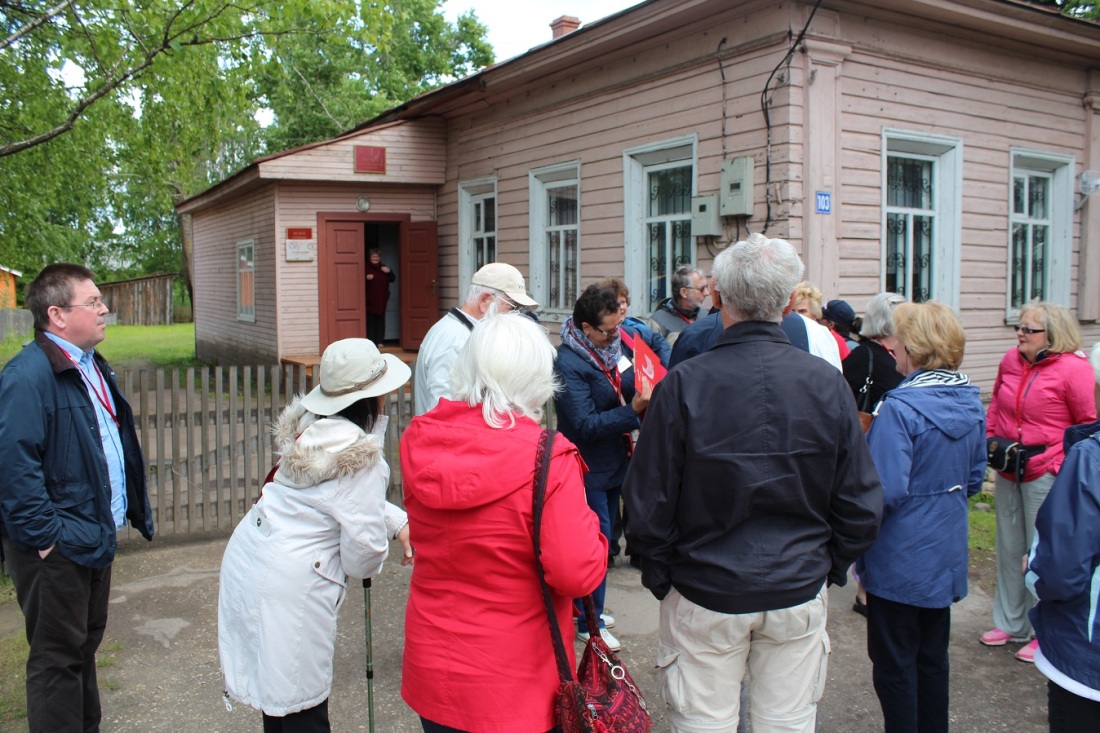 [This is Natalya, the person standing in the door.  She runs the place.  My Mom’s name was Natalia.  I told her that when I asked to take her picture.]

[Next:  Kirillo-Belozersky Monastery, translated into English as White Lake [translation of the town name of Beloozero] St. Cyril’s Monastery, used to be the largest monastery and the strongest fortress in Northern Russia. By the 20th century, the town of Kirillov had grown nearby (Wikipedia).]

[The vast walled area of the monastery comprises two separate priories with eleven churches, most of them dating to the 16th century. Of these, nine belong to the Uspensky (Dormition, the Orthodox equivalent of the Catholic holiday known as the Assumption of Mary) priory by the lake. The Dormition cathedral, erected by Rostov masters in 1497, was the largest monastery church built in Russia up to that date. Its 17th-century iconostasis features many ancient icons, arranged in five tiers above a silver heaven gate endowed by Tsar Alexis in 1645. A lot of valuable objects kept in the sacristy are personal gifts of the tsars who visited the monastery (Wikipedia).] 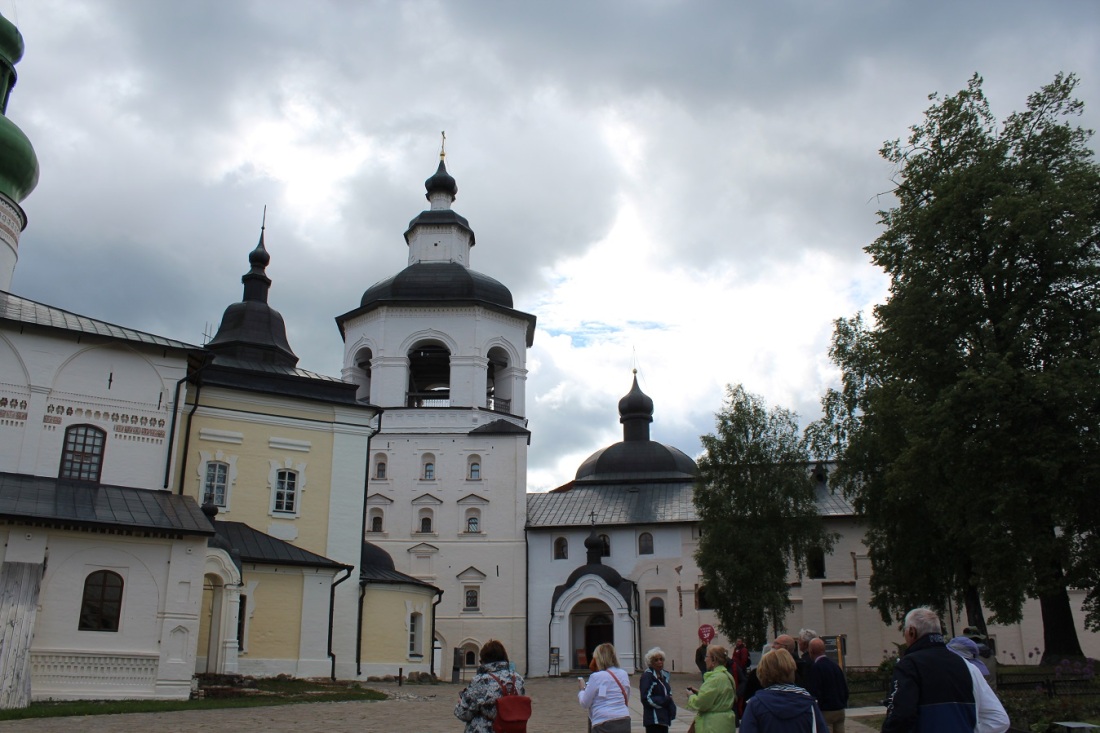 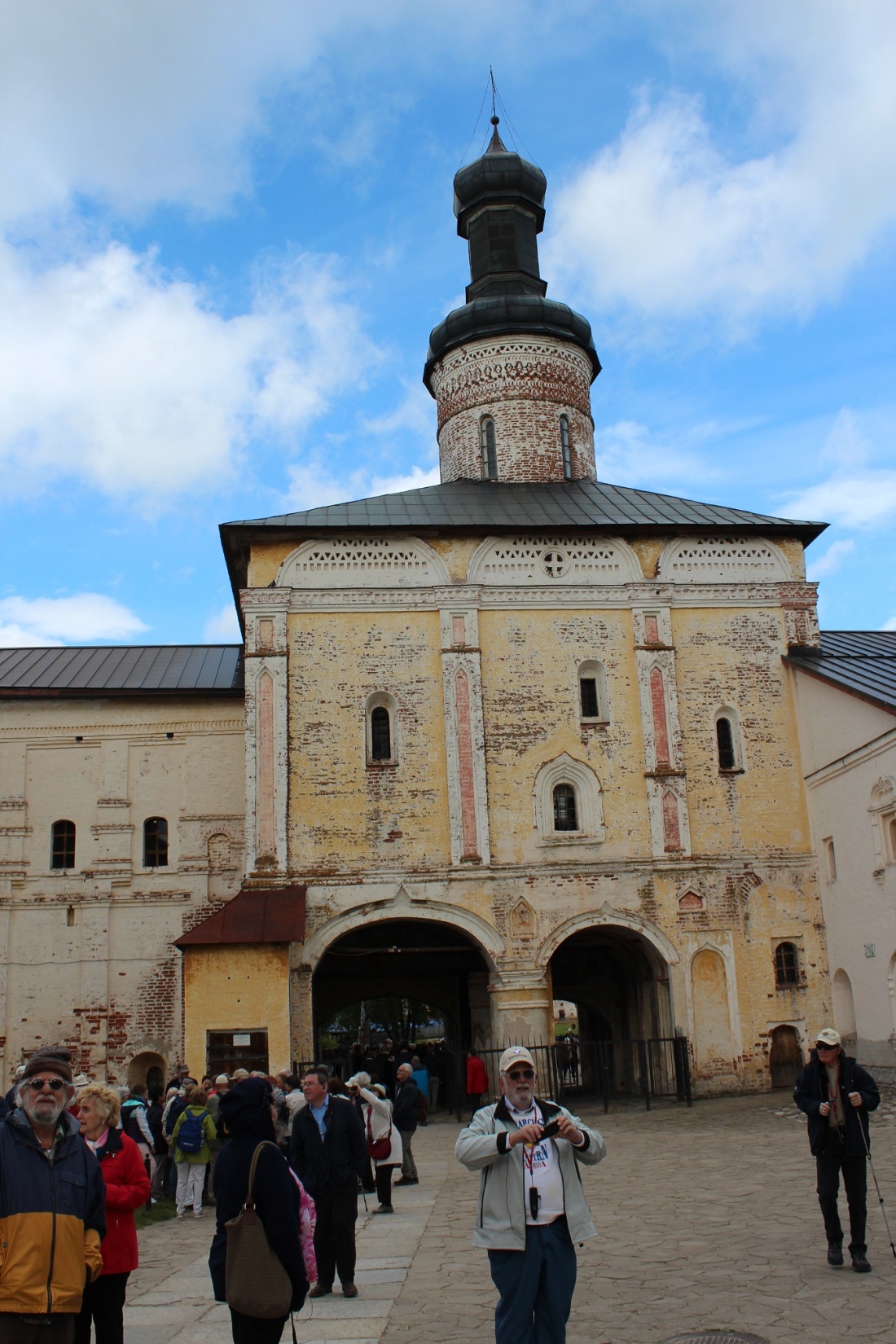 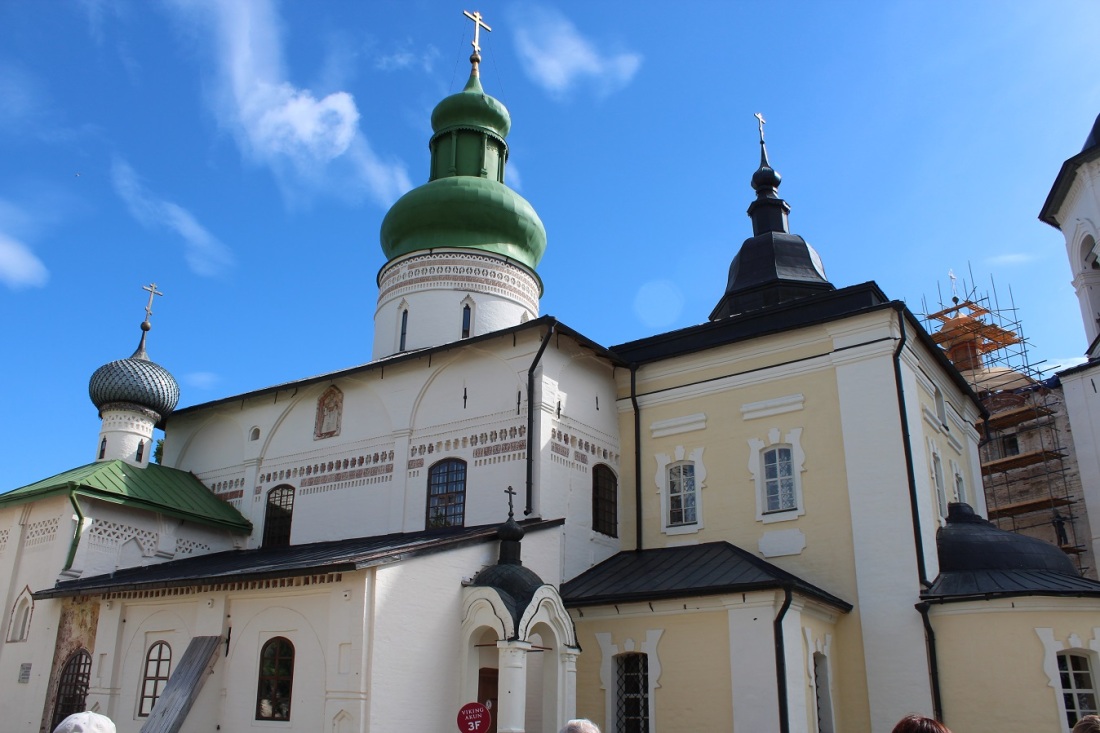 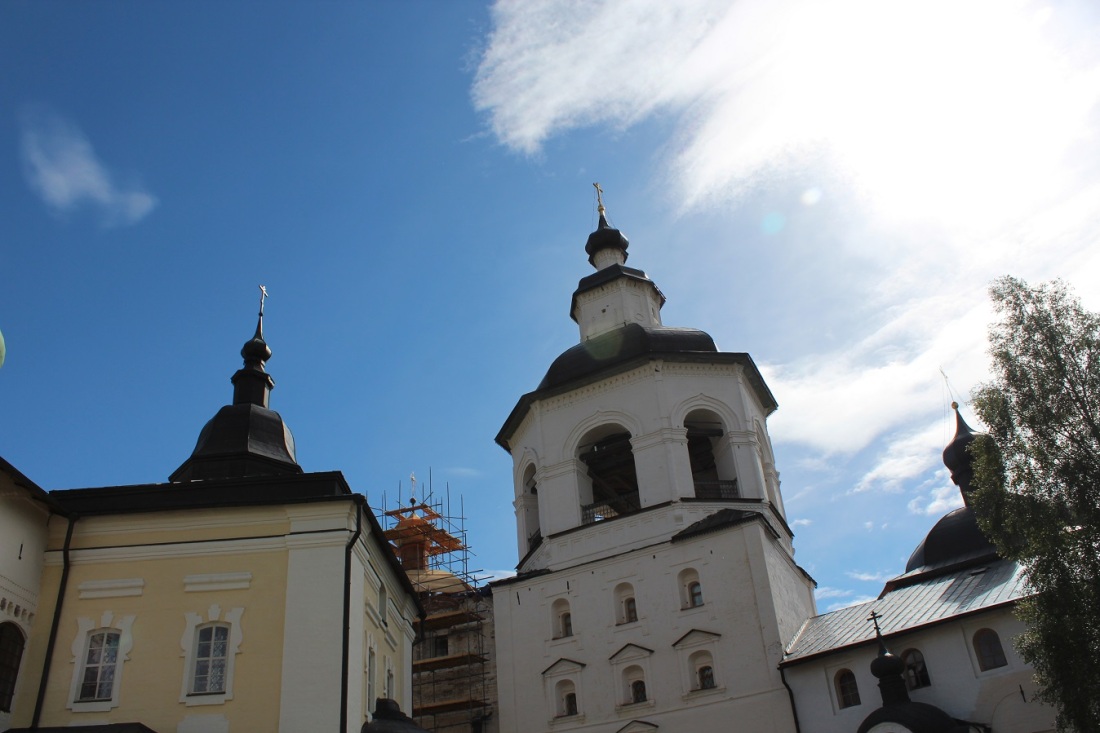 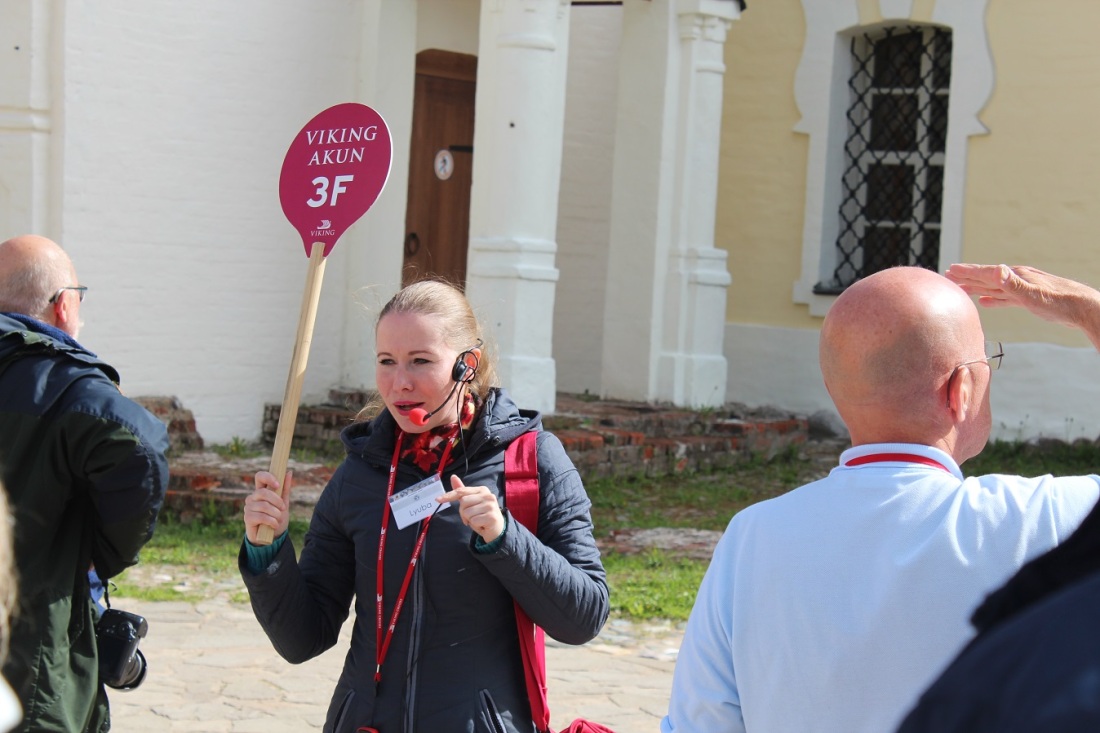 [She’s likely telling the story of the cupola?] 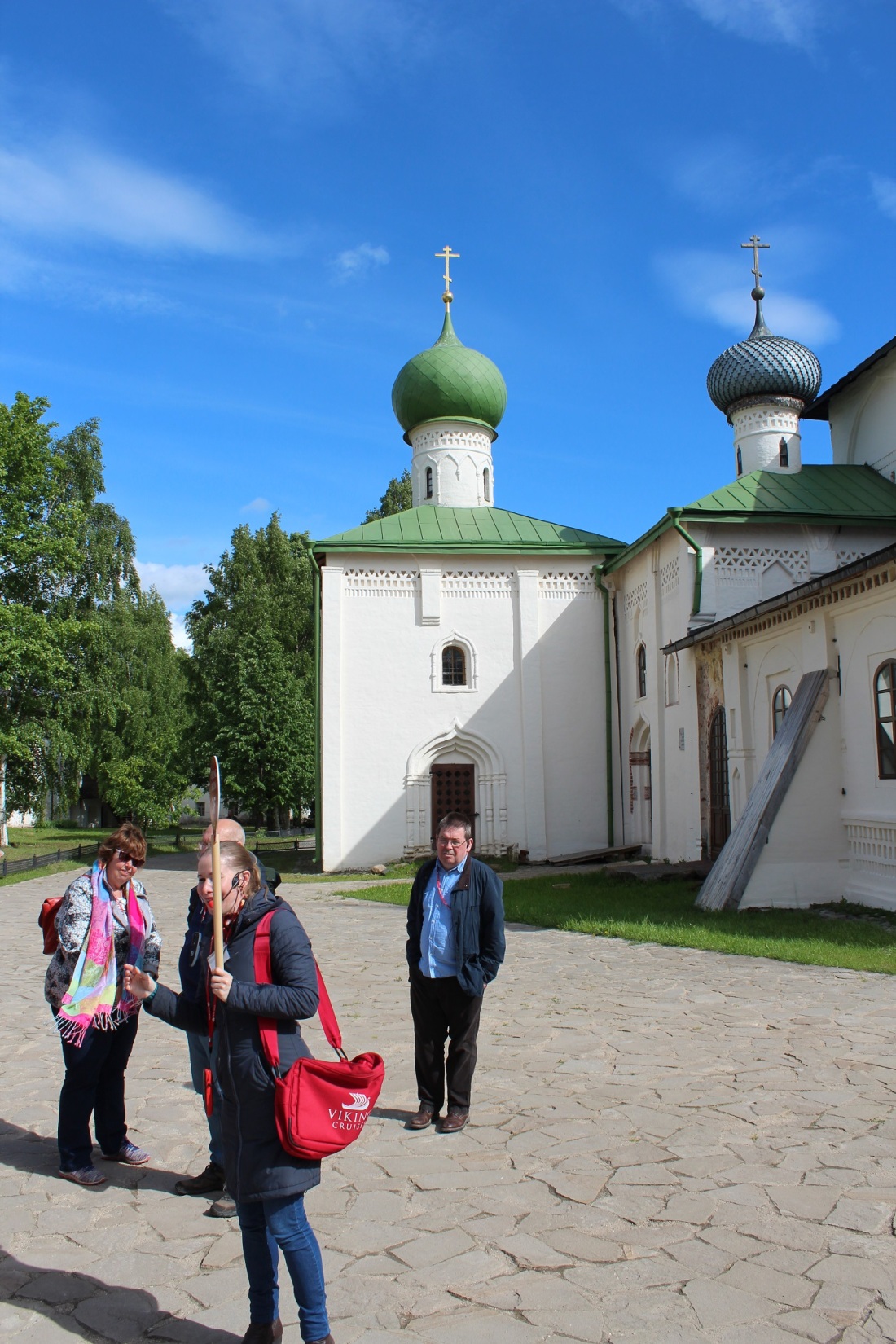 [May be getting mixed messaging?]

[Lake Beloye or White Lake is in the northwestern part of Vologda Oblast.  The town of Belozersk is located on its coast. In terms of area, Lake Beloye is the second natural lake of Vologda Oblast (behind Lake Onega), and the third lake also behind the Rybinsk Reservoir. It is one of the ten biggest natural lakes in Europe (Wikipedia).]

[I believe she told us the lake has healing or restorative powers (though I could find nothing in the literature).  All you had to do was touch the water.  Dr. Kiehne, showing a nimbleness beyond his years, squatted and touched the water.  Final results have yet to be determined . . . ] 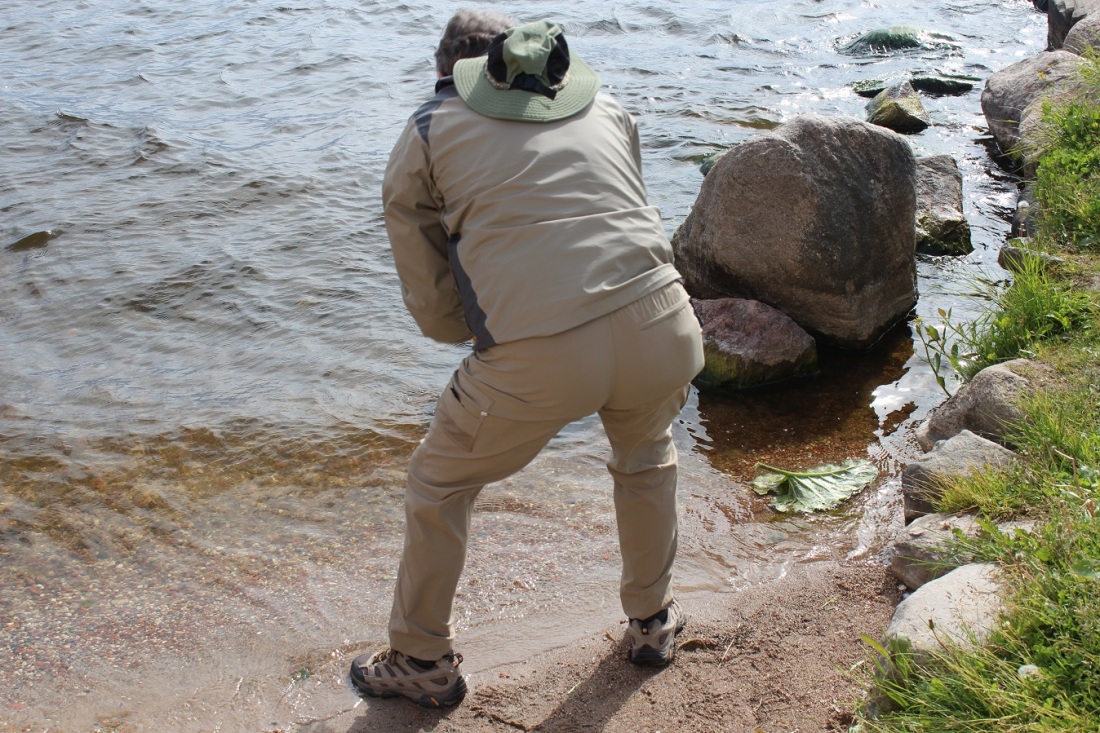 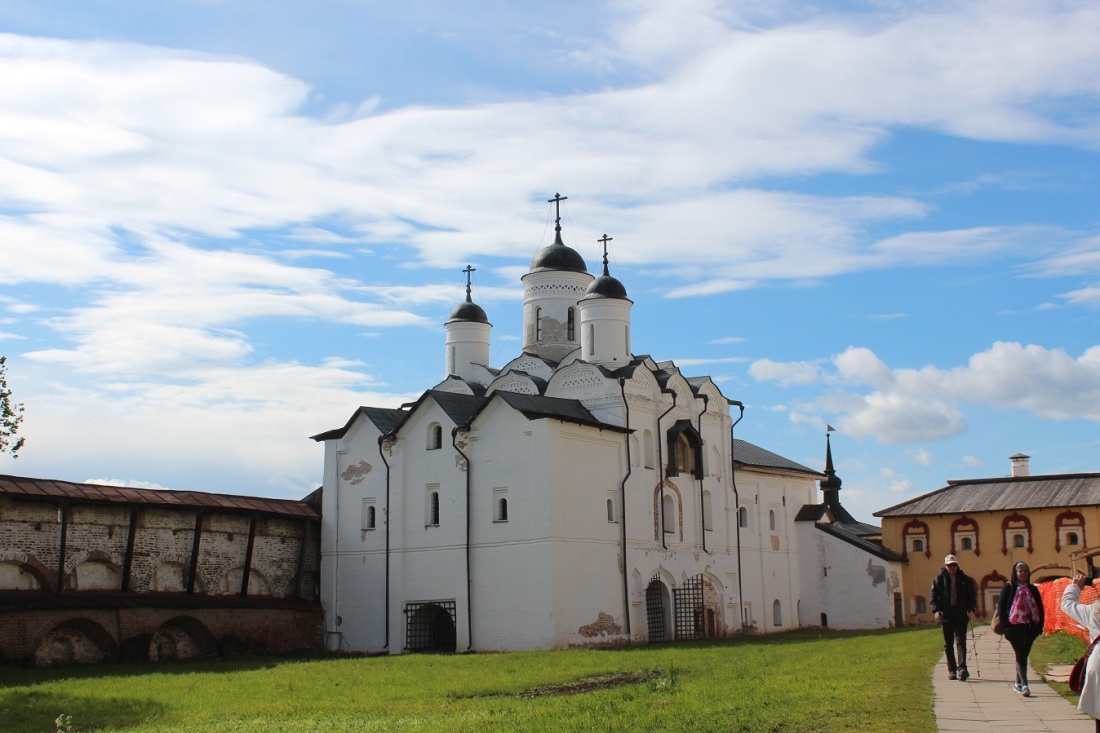 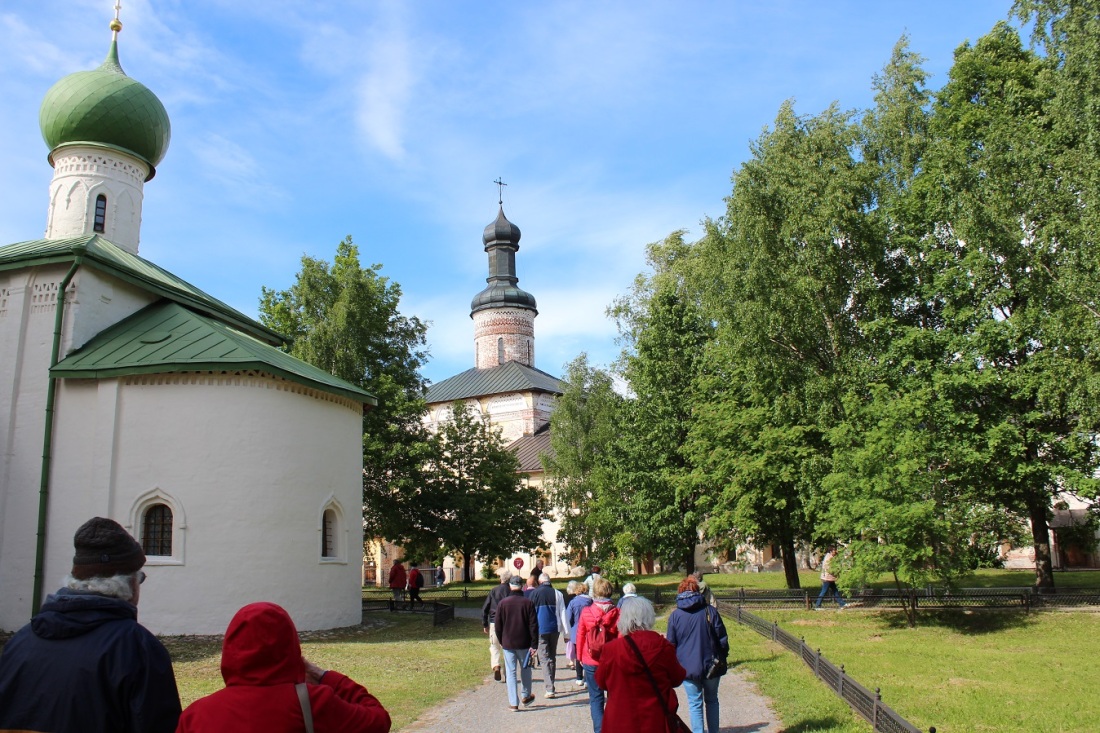 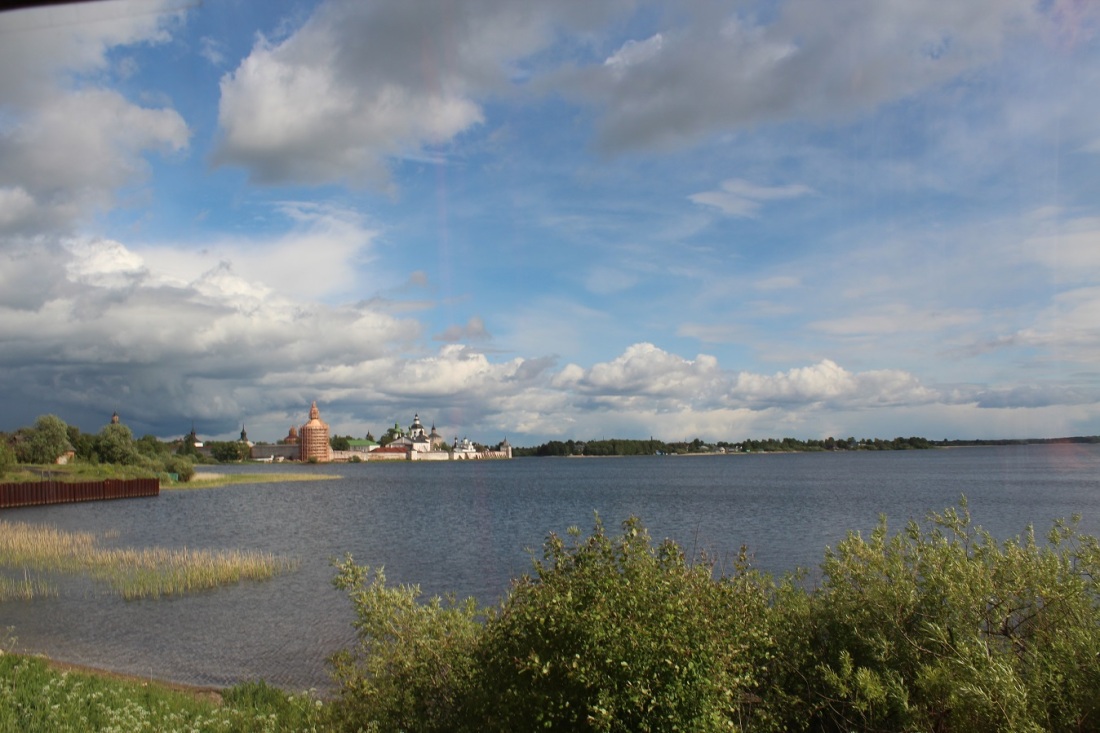 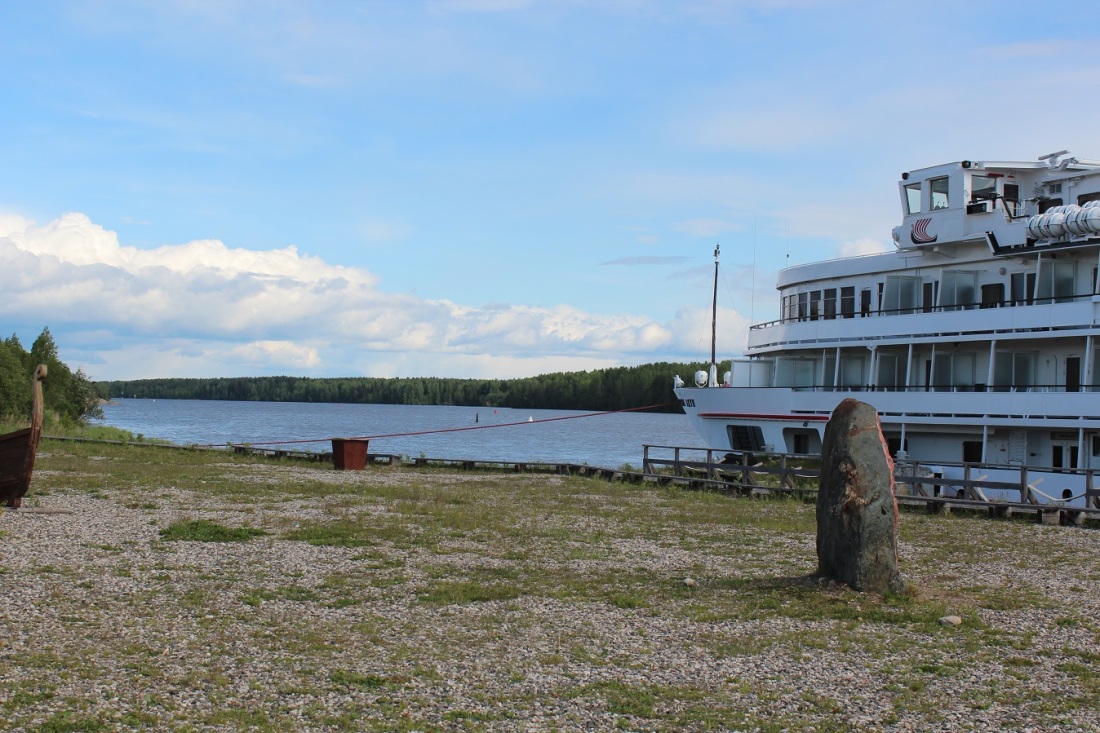 In time for fine shipboard dining . . .

[More people you meet along the way. Dasha, from Russia, is there every morning at breakfast and still there when we leave after dinner at night. Rina, from the Philippines, is there to pour our wine every night. They will make 14 trips between St. Petersburg and Moscow this season. As you can see from their attire, it was “traditional” Russia night . . . ] 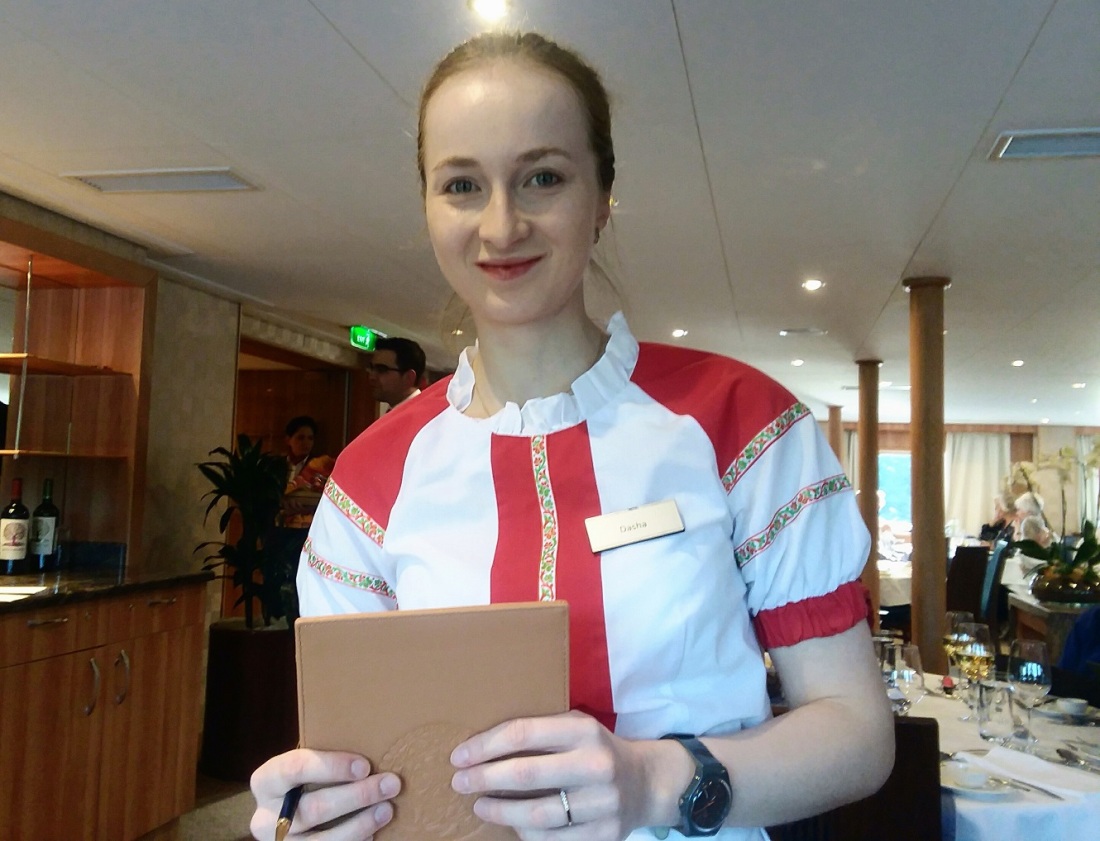 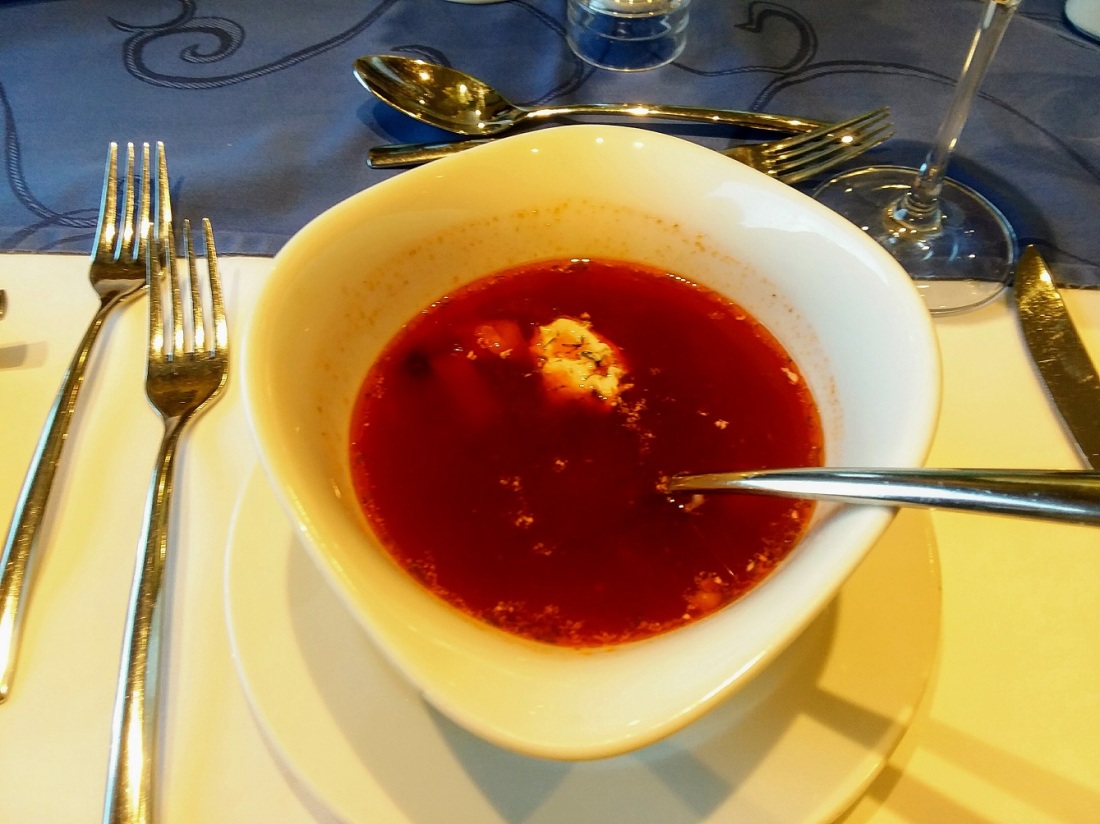 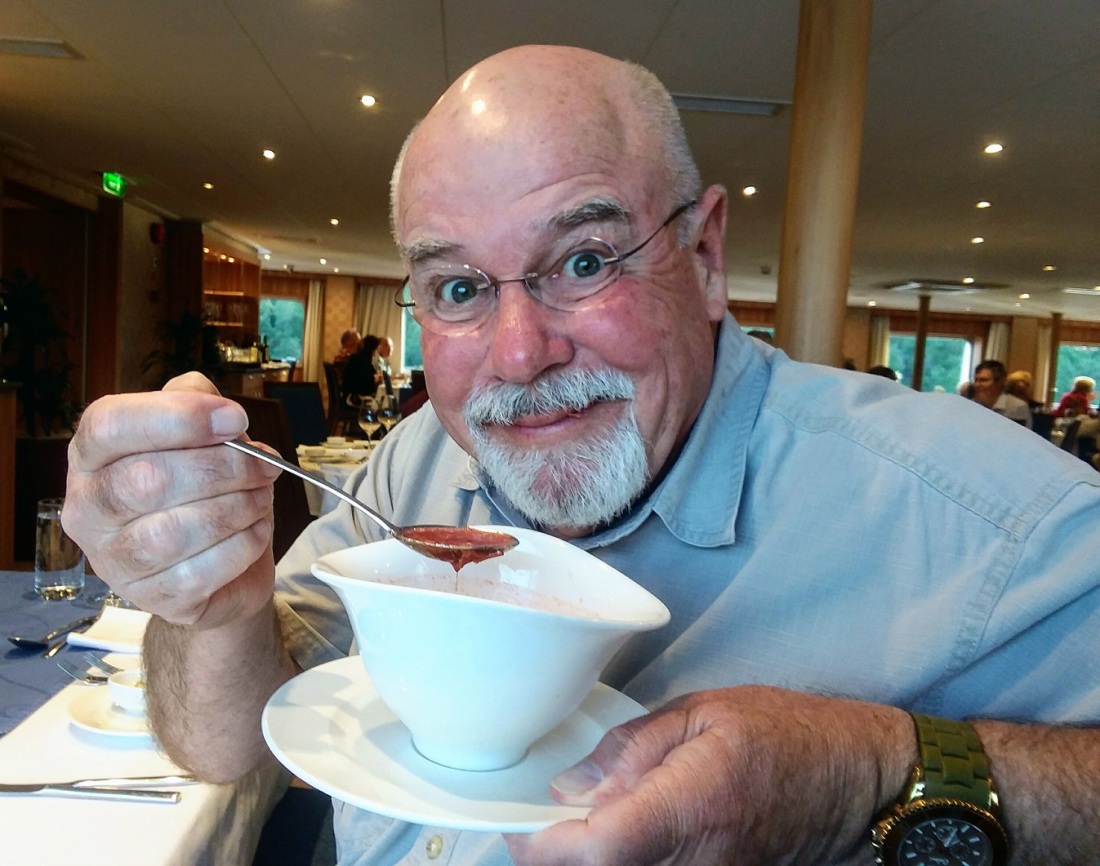 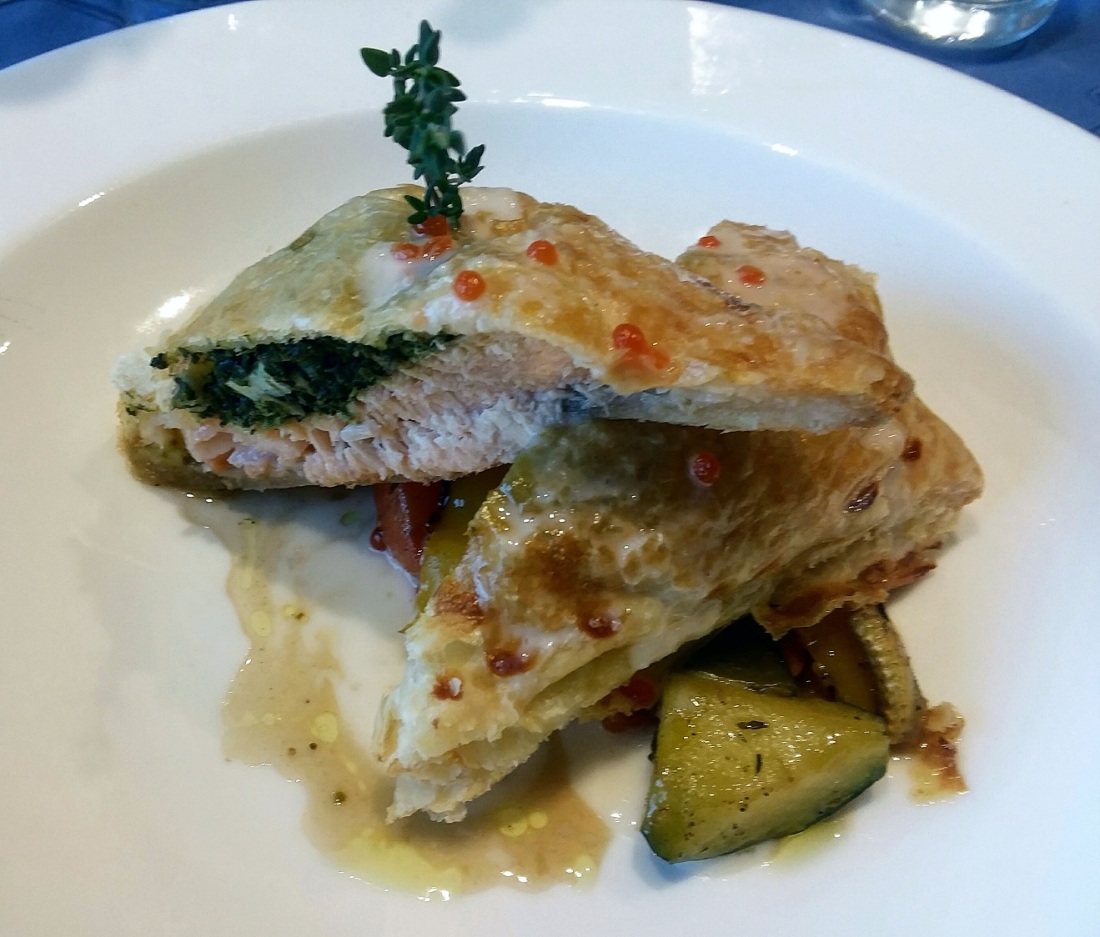 [We ate with them several times. Interesting couple whose names I can no longer remember, of course.  This was an anniversary night for them.  As I vaguely recall, I believe he escaped from behind the Iron Curtain as a young boy, on his own. I think they live in Pennsylvania or Michigan, or maybe Ecuador, who remembers such things?]

Why buy good luggage? You only use it when you travel.  ~  Yogi Berra