[We’ve finished lunch, now it was time to finish our stroll through Zaryadye Park and ahead is the “floating bridge” . . .]

[View of the floating bridge, the Moskva River, and the Kotelnicheskaya Embankment Building . . . ] 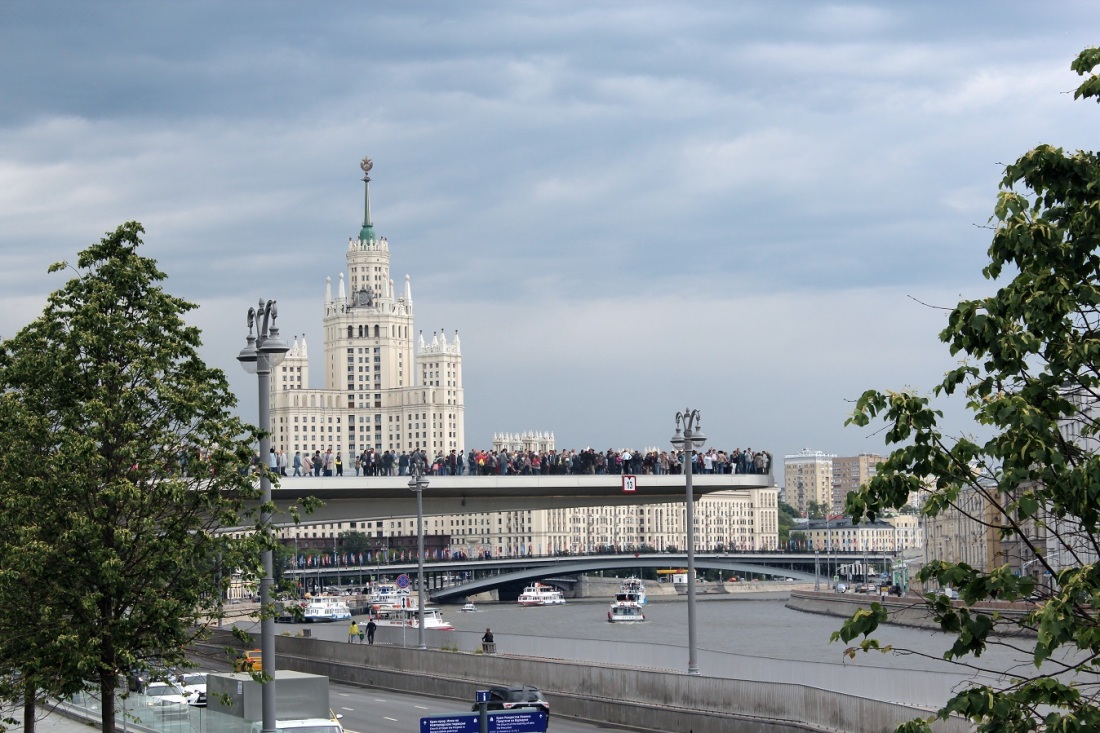 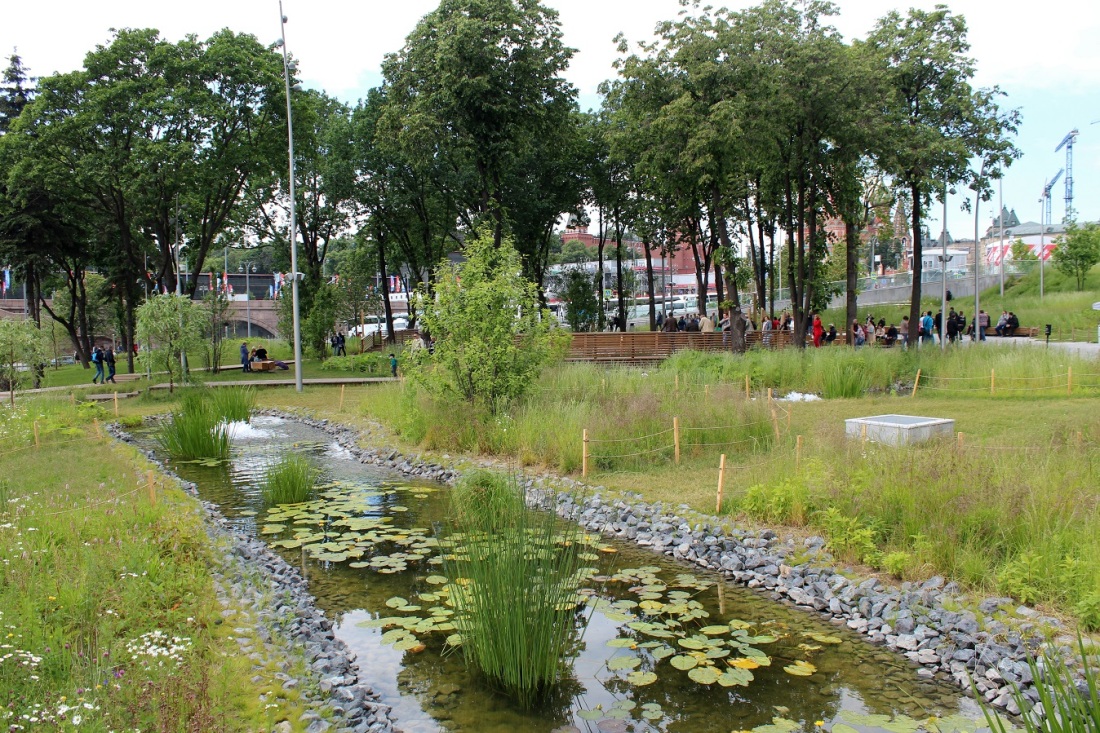 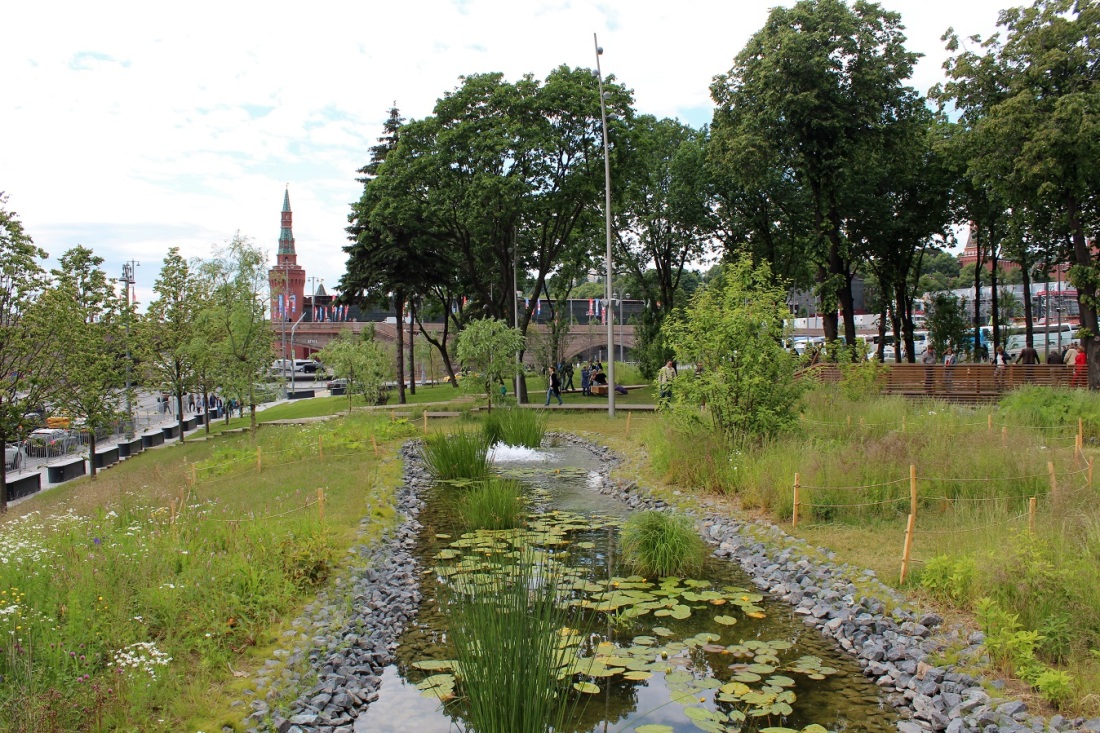 [And what’s a park without flowers?] 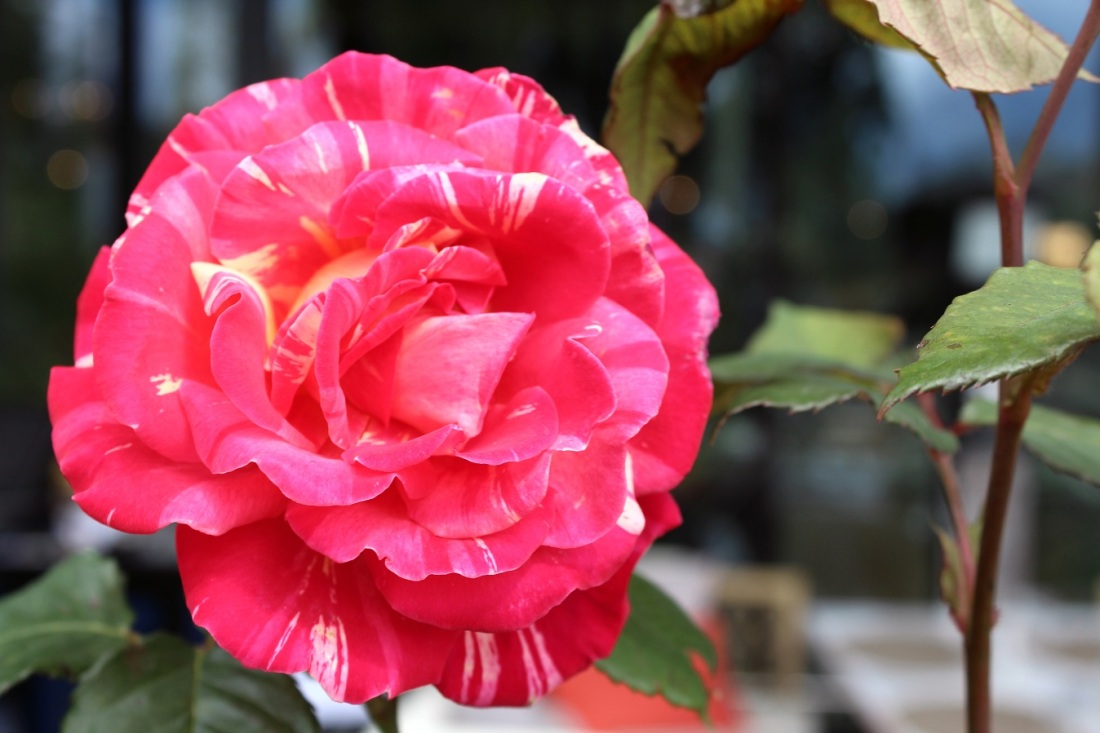 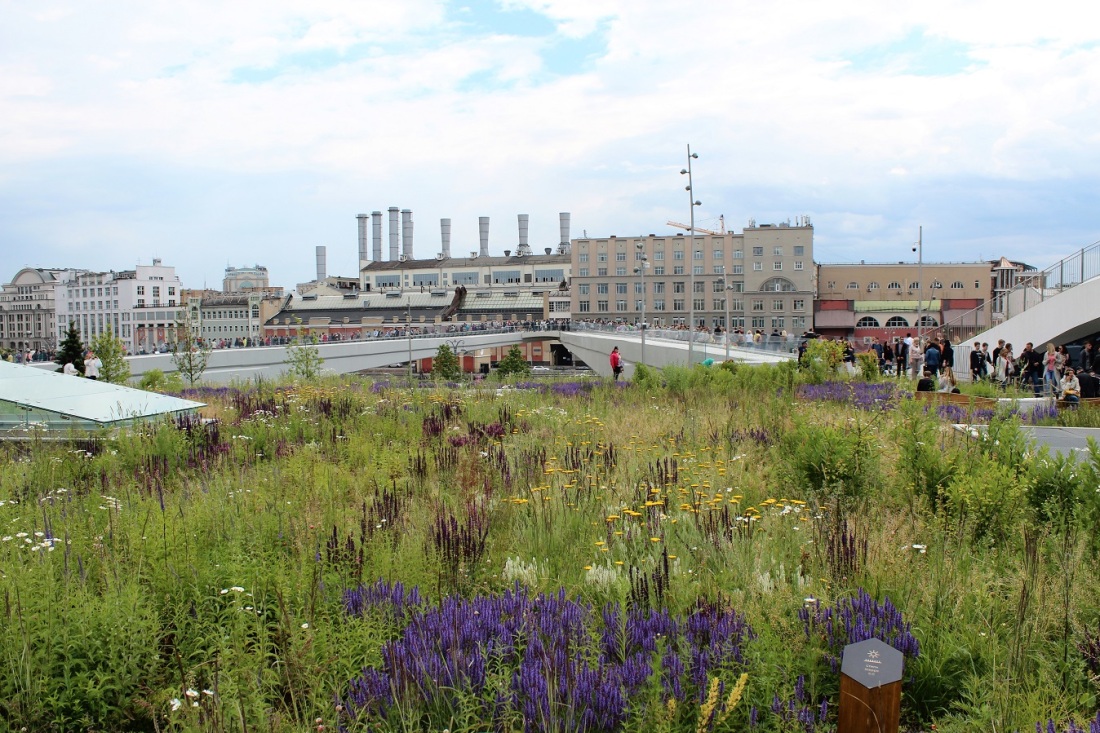 [The floating bridge is a thin air structure in the form of the letter “V” with a large outward extension above the water. It towers over the embankment and seems to hover over the Moscow River.  The bridge is unique in Russia: it is a 70 meter structure without a single support. The bearing structure of the bridge is made of concrete, and the decorative elements are made of metal. The deck is wooden; the construction withstands a load of 240 tons corresponding to 3–4 thousand people (Wikipedia).] 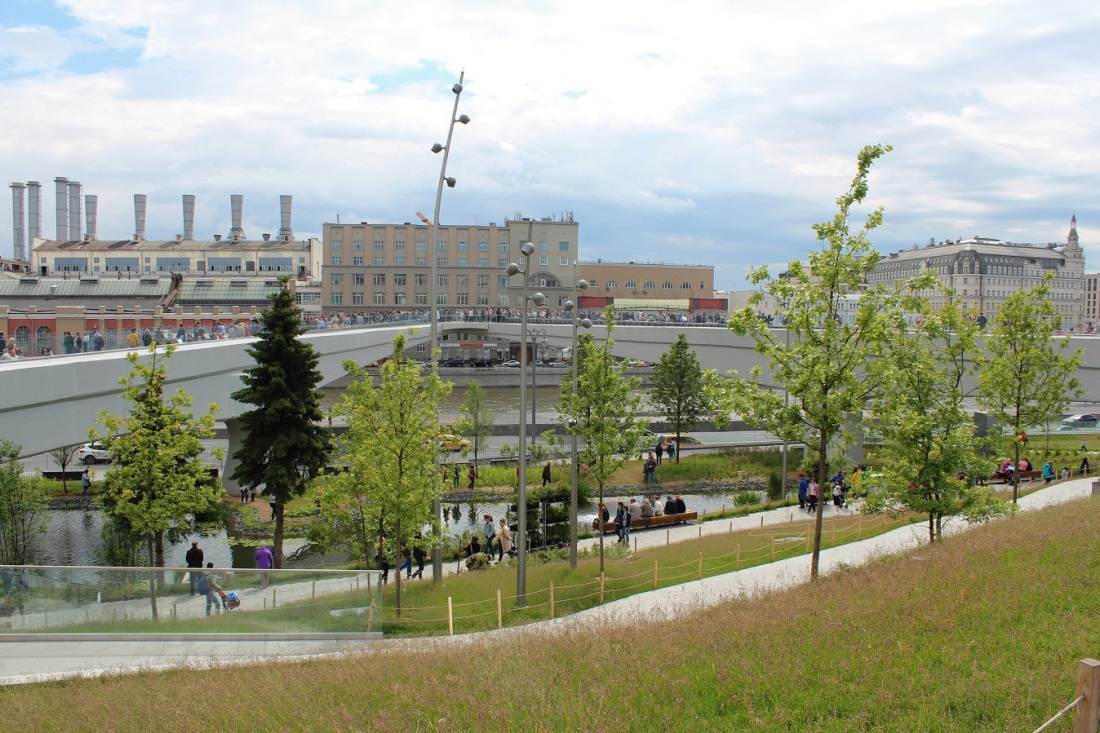 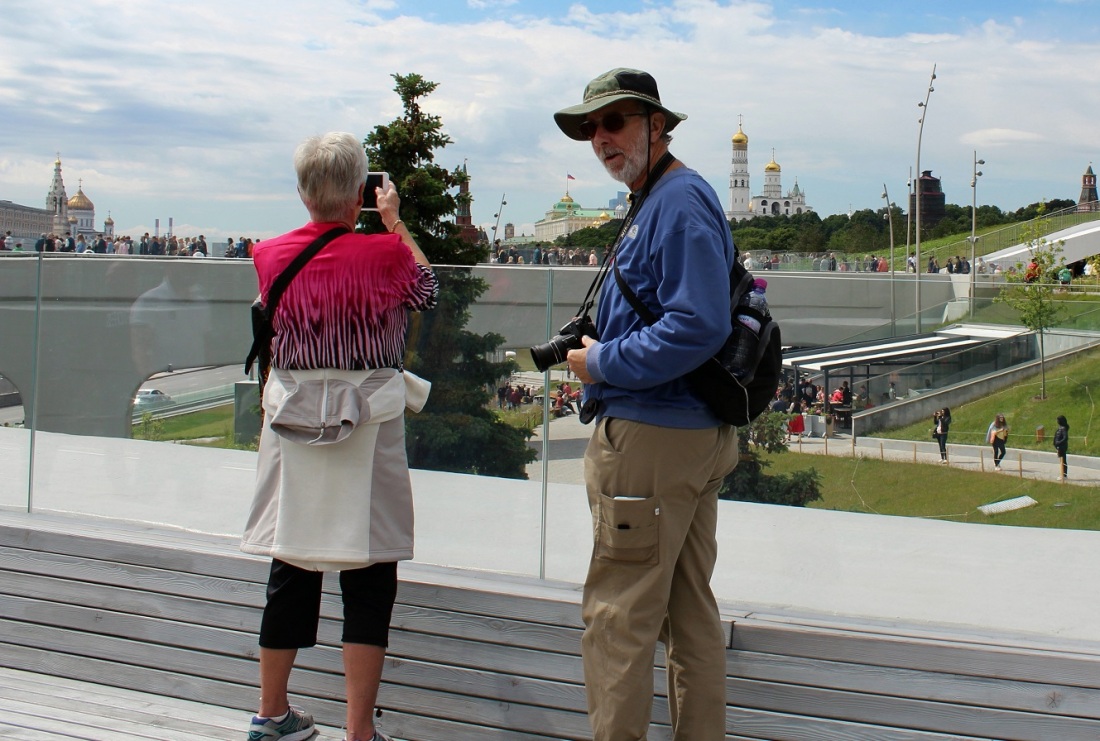 [Again, the view of Moskva river and Kotelnicheskaya Embankment Building . . . ]

[And here looking directly across the river . . . ] 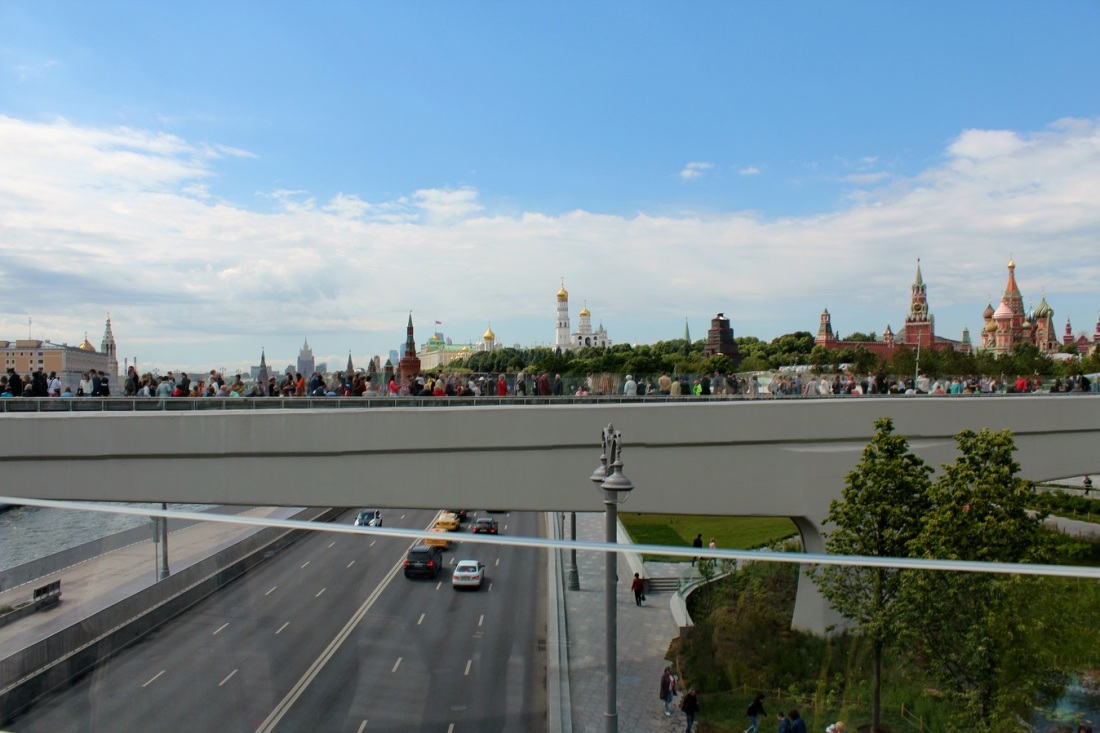 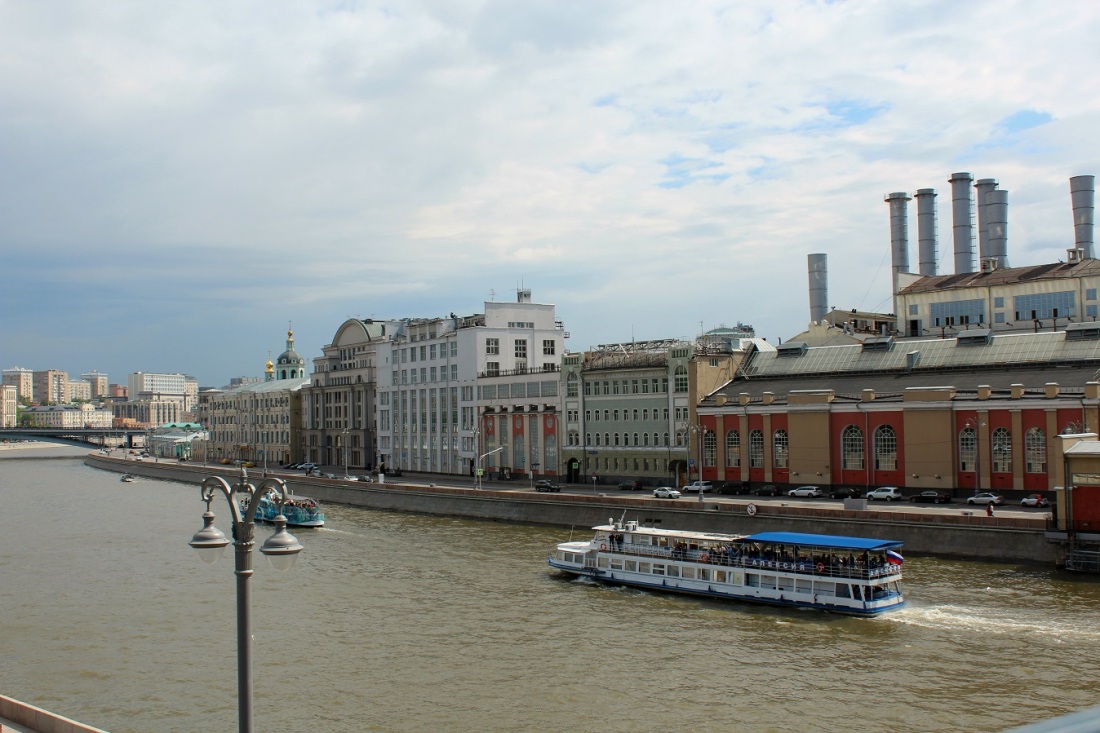 [The Super rises above the throngs for a shot of the Kremlin . . . ] 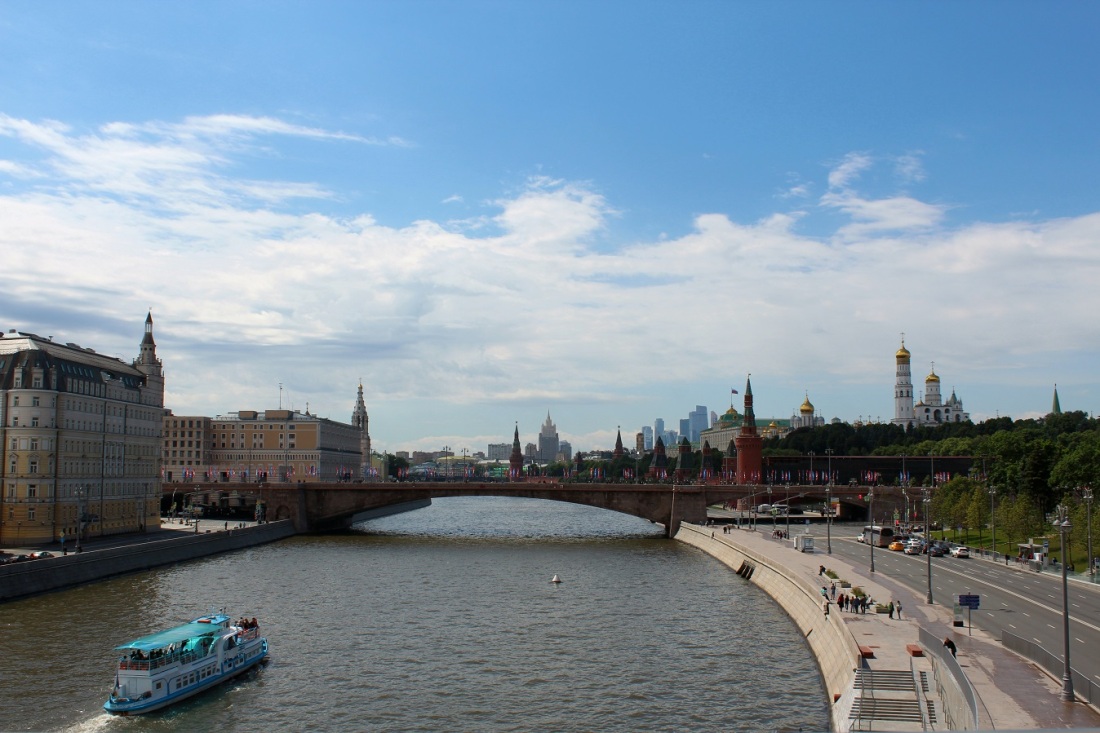 [The glass crust cover of the amphitheater . . . ] 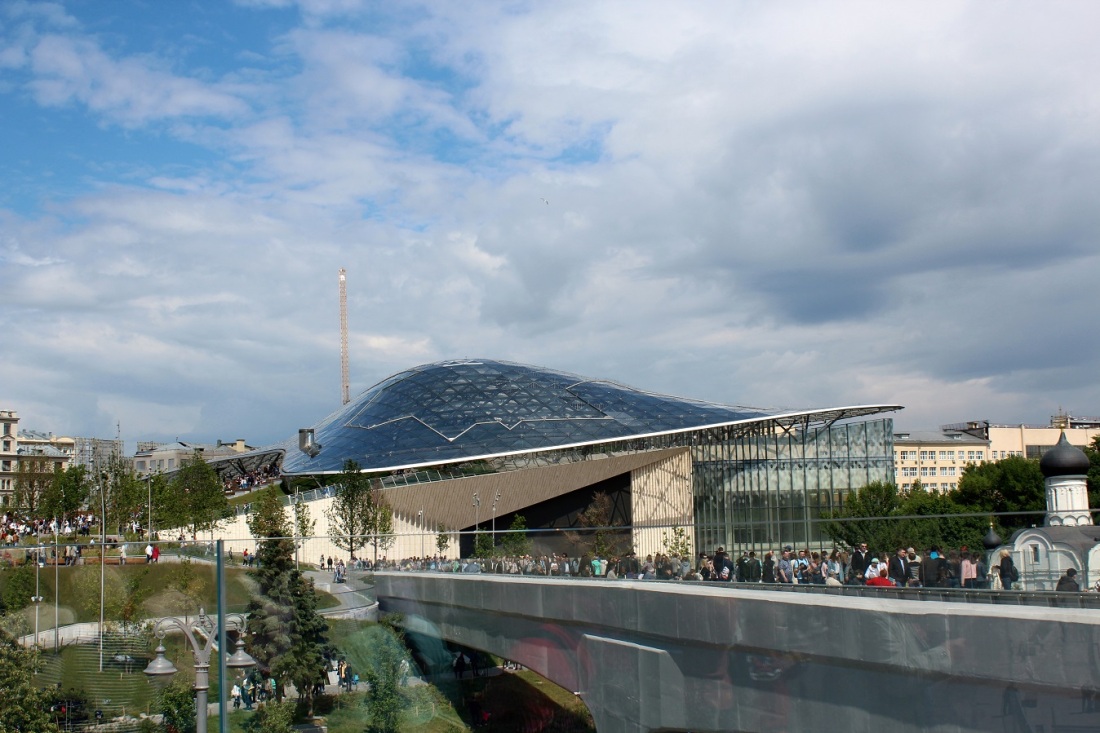 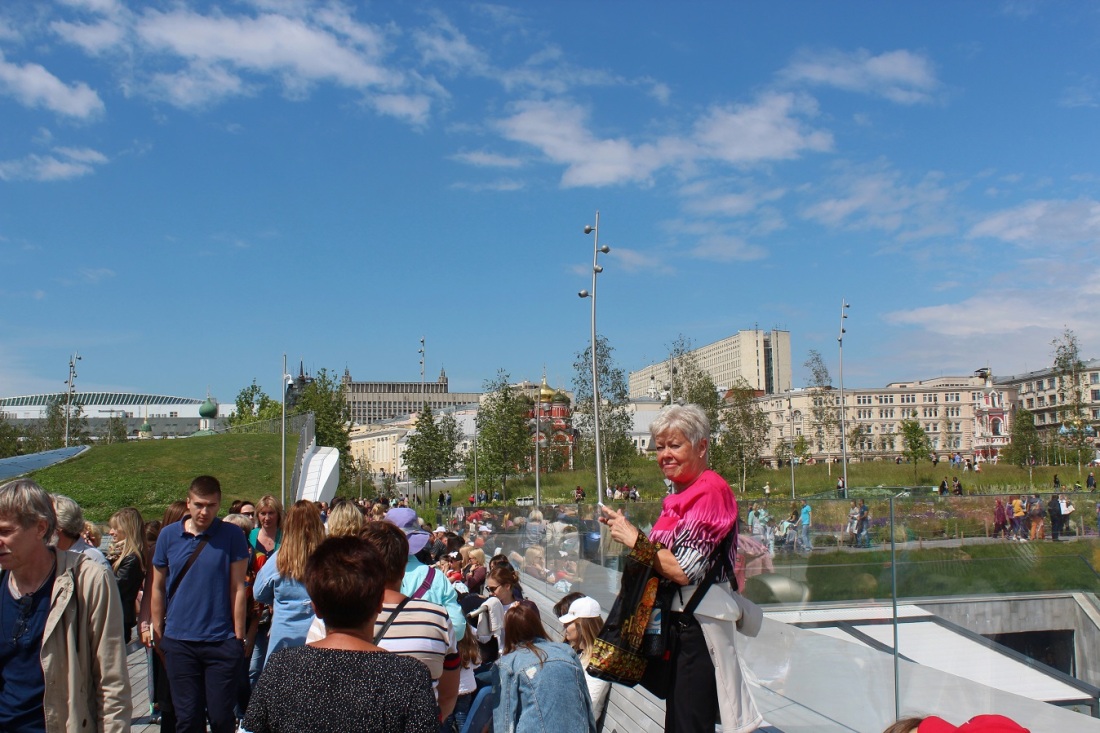 [I do not know who photobombed behind the soccer ball . . . ] 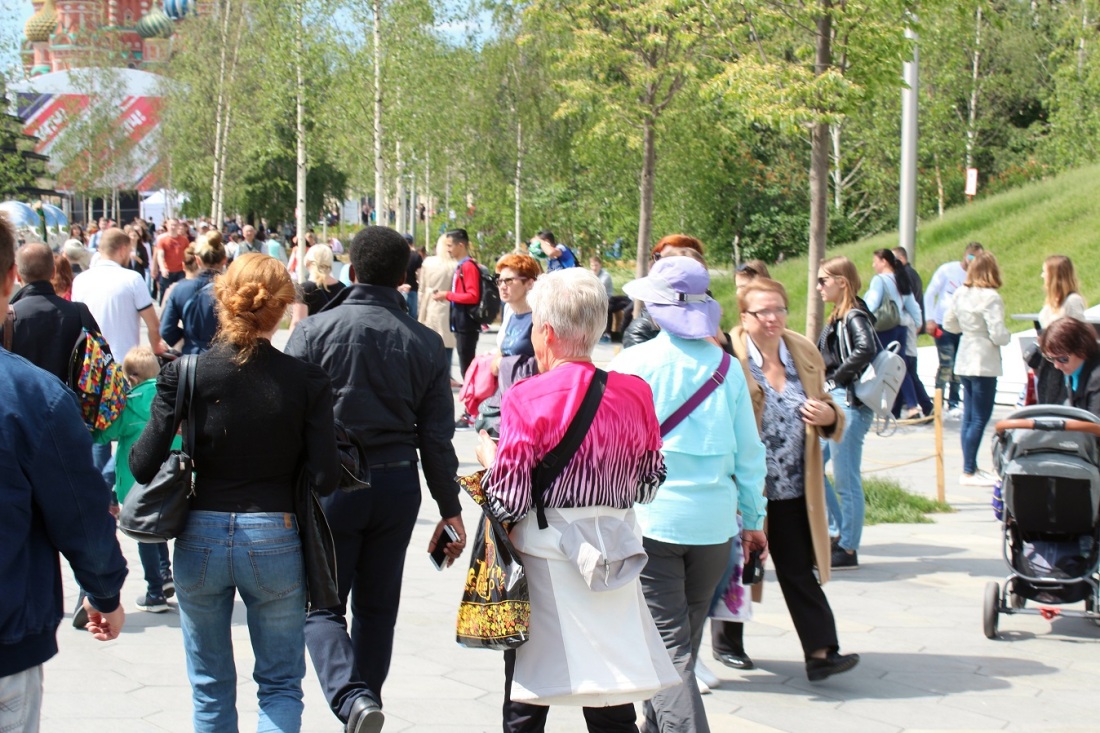 [Along the way this woman asked us if we were Americans.  Is it that obvious?]

[So she chatted with us along way.  She was a Russian journalist here to cover the World Cup.  I think her name was Maria.  We should have visited longer . . . ]

[It turned out to be a longer hike than we thought.  Here Tom stops to ponder the efficacy of climbing over the wall – either that or he’s playing the role of a prison escapee.] 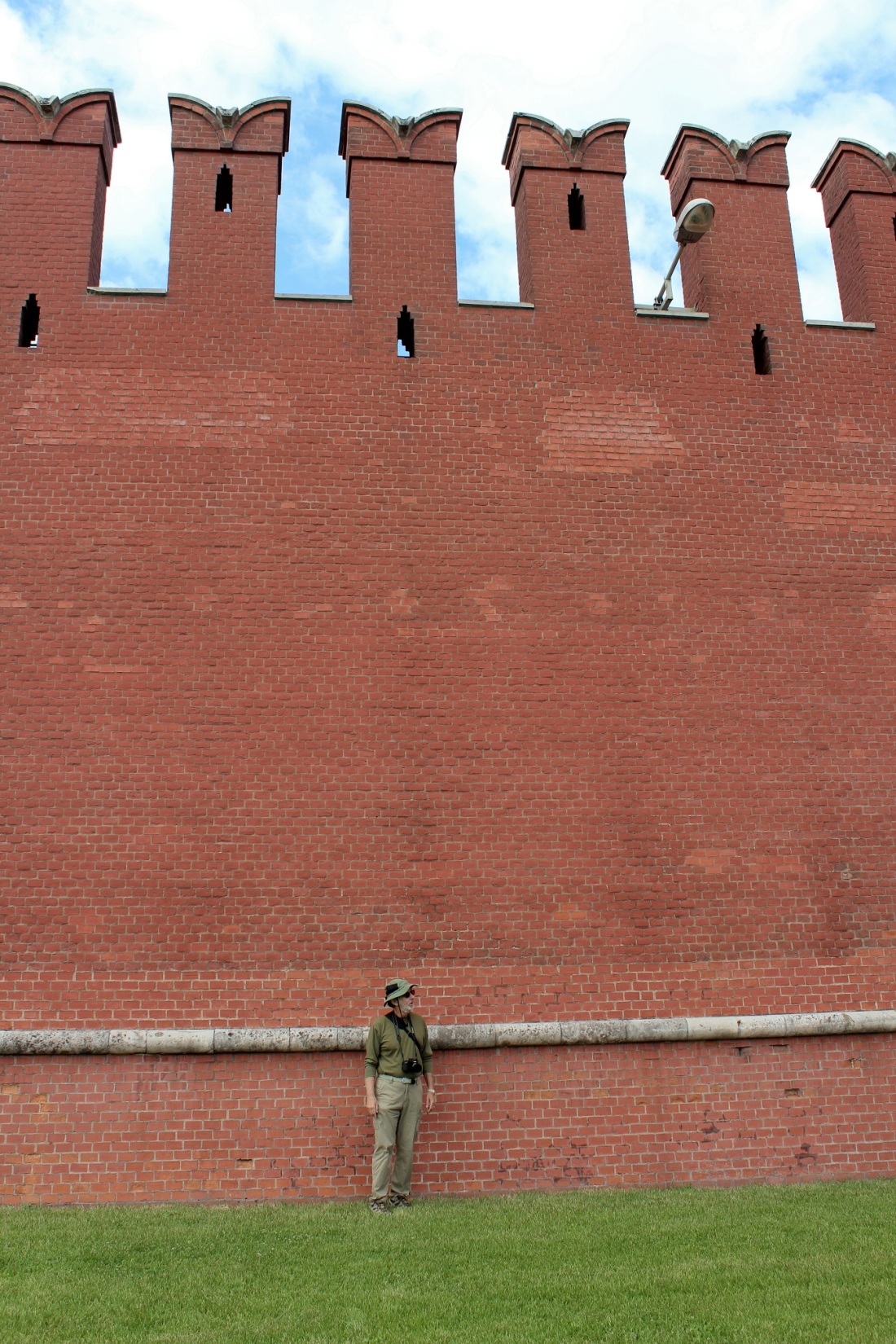 [The staging area for the assault on the Kremlin entrance gate.  Tom taking advantage of one of the few places to take a load off . . . ]

[Amidst other lollipop group leaders.  Yes, we’re going enmasse up those steps.  I believe it would take forever to try to buy a ticket and go through solo.  Even with this many people, the groups actually entered rather quickly . . . ] 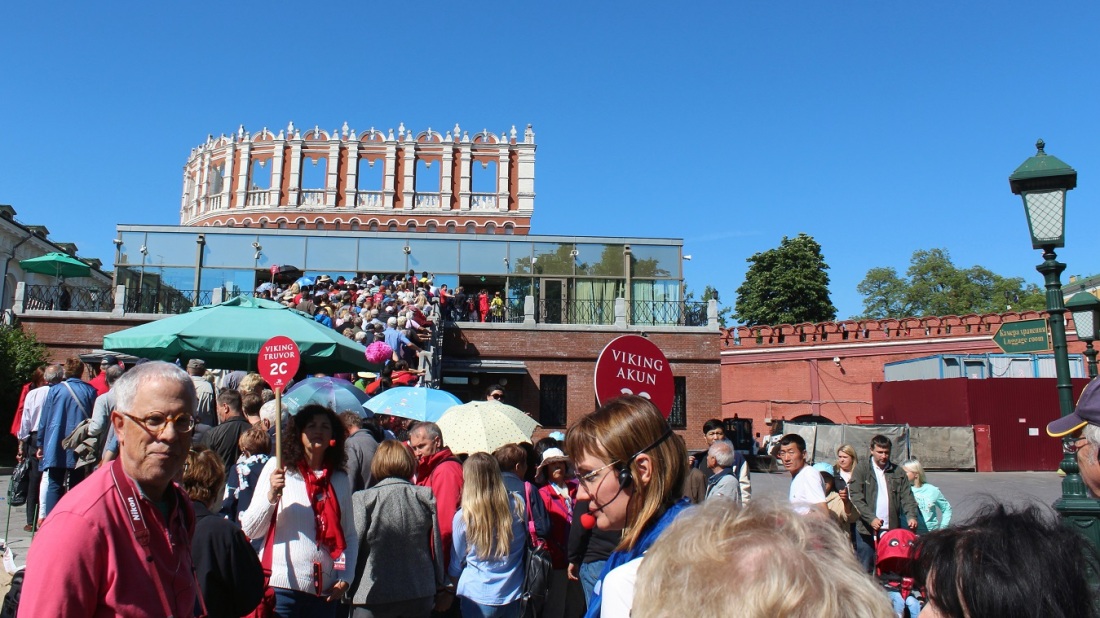 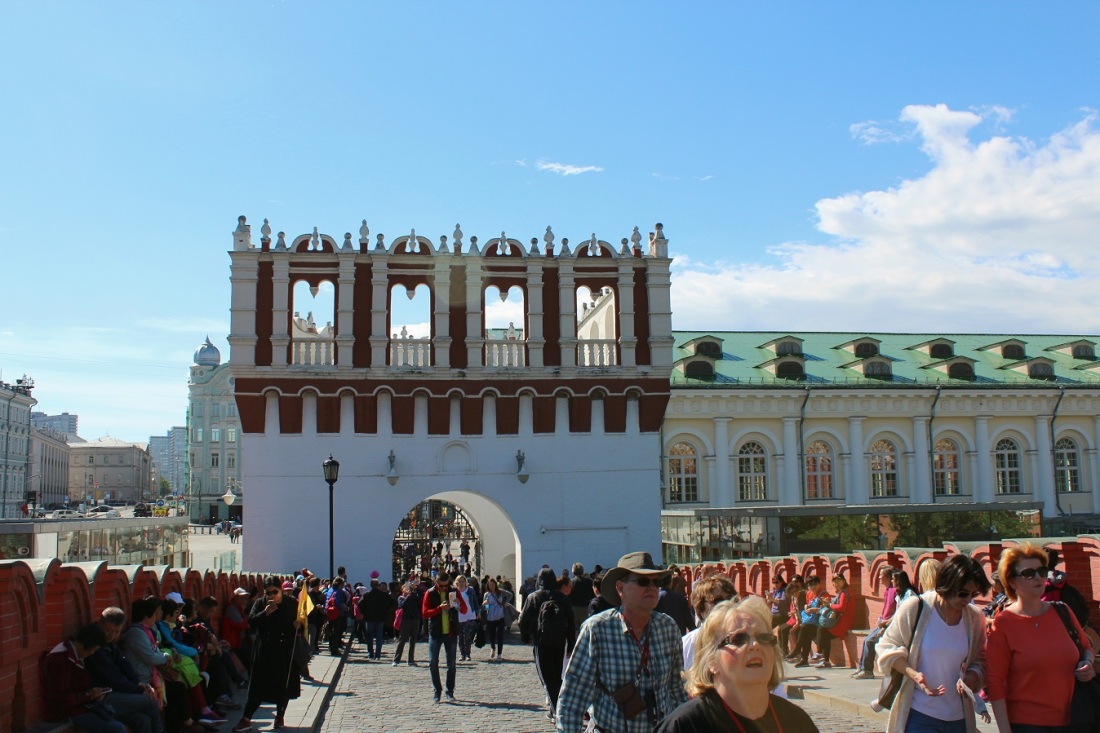 [Familiar sightings ahead from the Red Square side – the clock tower and St. Basil’s.]

[Annunciation Cathedral in the background . . . ]

[Our statuesque guide had to stop and gather her slower moving minions on occasion . . . ] 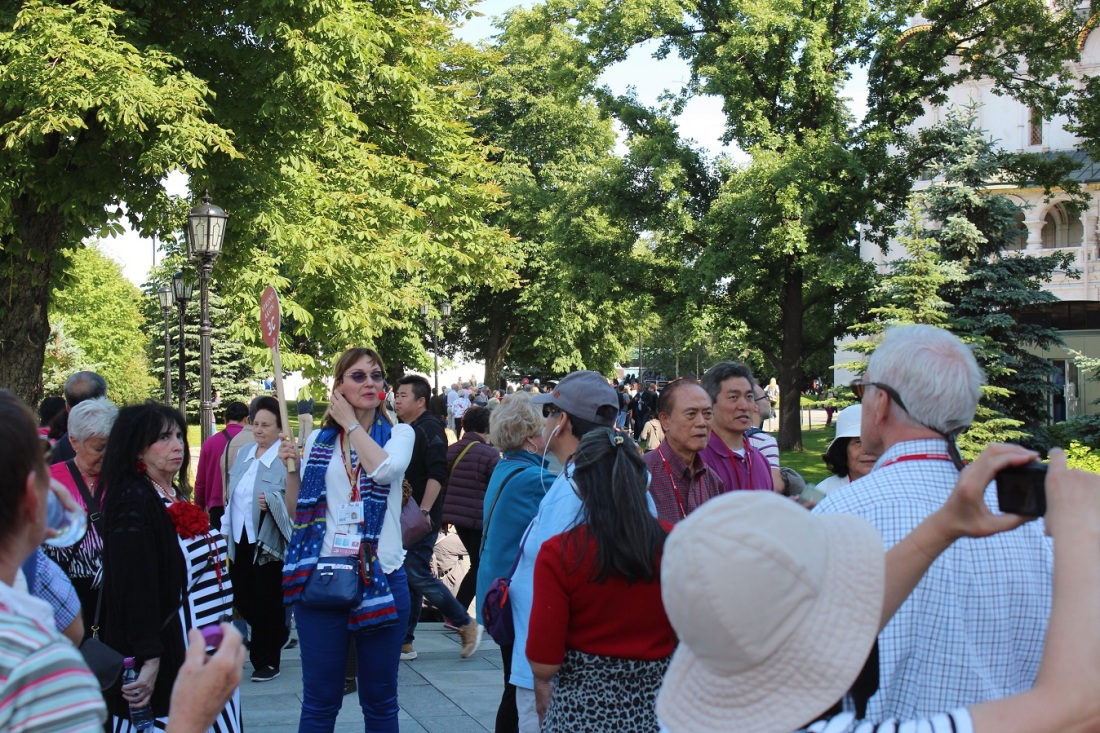 [Putin’s office is the one under the central arch.  I was amazed at the visible lack of security?]

[The Tsar cannon with the Annunciation Cathedral in the background . . . ] 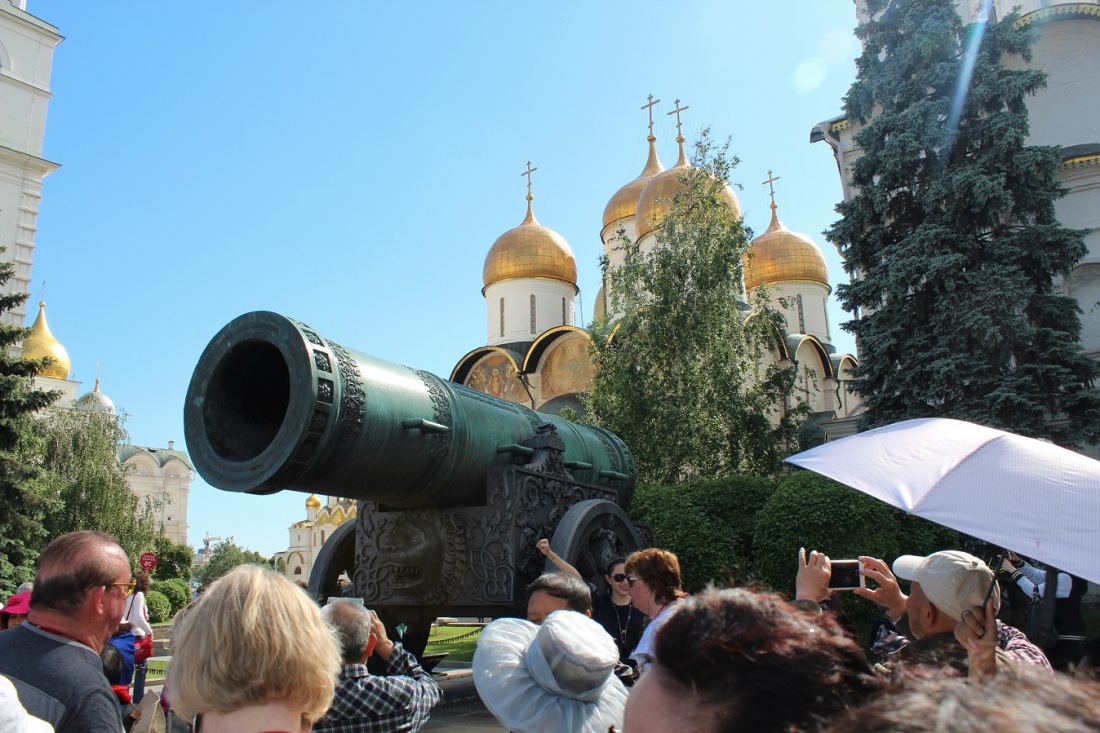 [The Tsar Cannon is a large early modern periodartillery piece (known as a bombarda in Russian).  It is a monument of Russian artillery casting art, cast in bronze in 1586 in Moscow. Mostly of symbolic impact, it was never used in a war. However, the cannon bears traces of at least one firing. Per the Guinness Book of Records it is the largest bombard by caliber in the world, and it is a major tourist attraction in the ensemble of the Moscow Kremlin (Wikipedia).]

[Looking down the barrel, Assumption Cathedral on the left; Patriarch’s Palace (Church of the 12 Apostles) on the right . . . ]

[Honestly, I didn’t break it!] 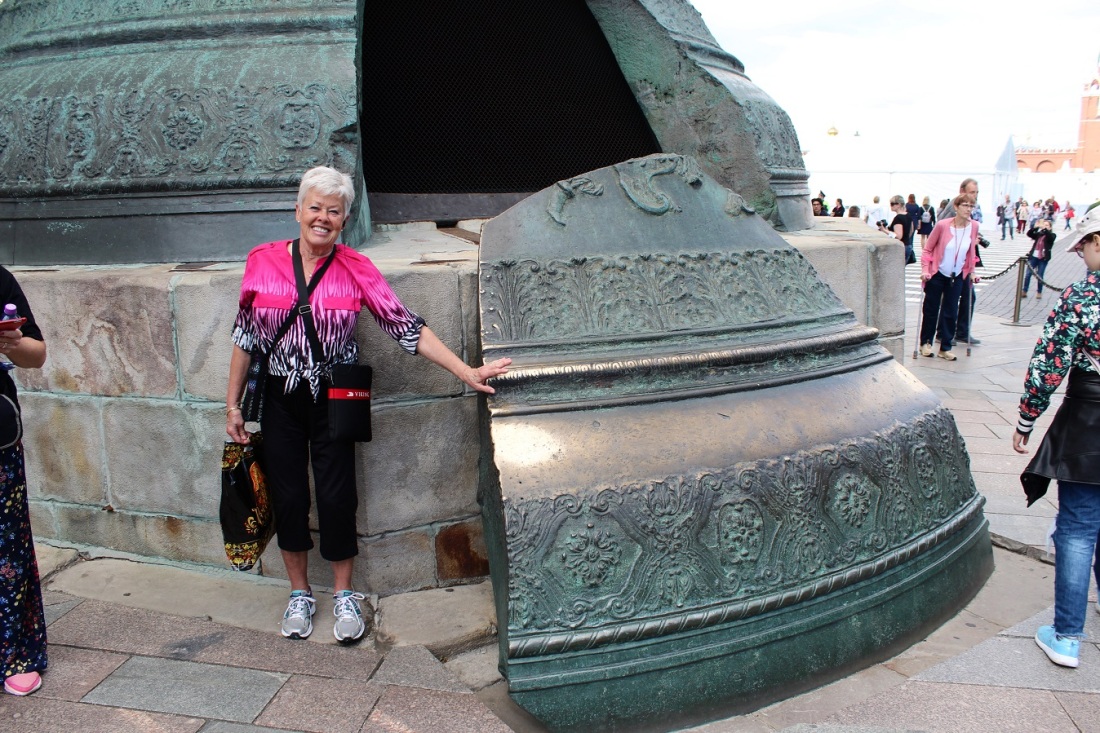 [Now entering Cathedral Square, most of the cathedrals we have already seen from outside the square . . . ]

[And lots of tourists just generally milling around . . . ] 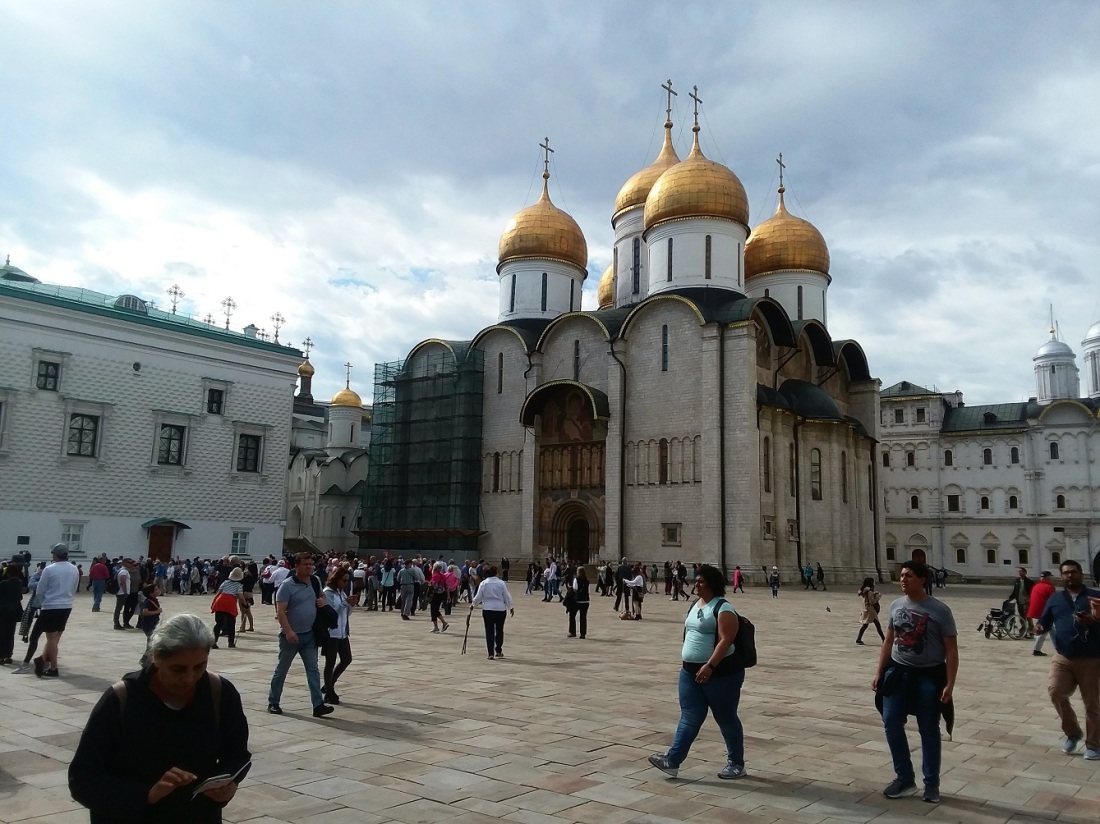 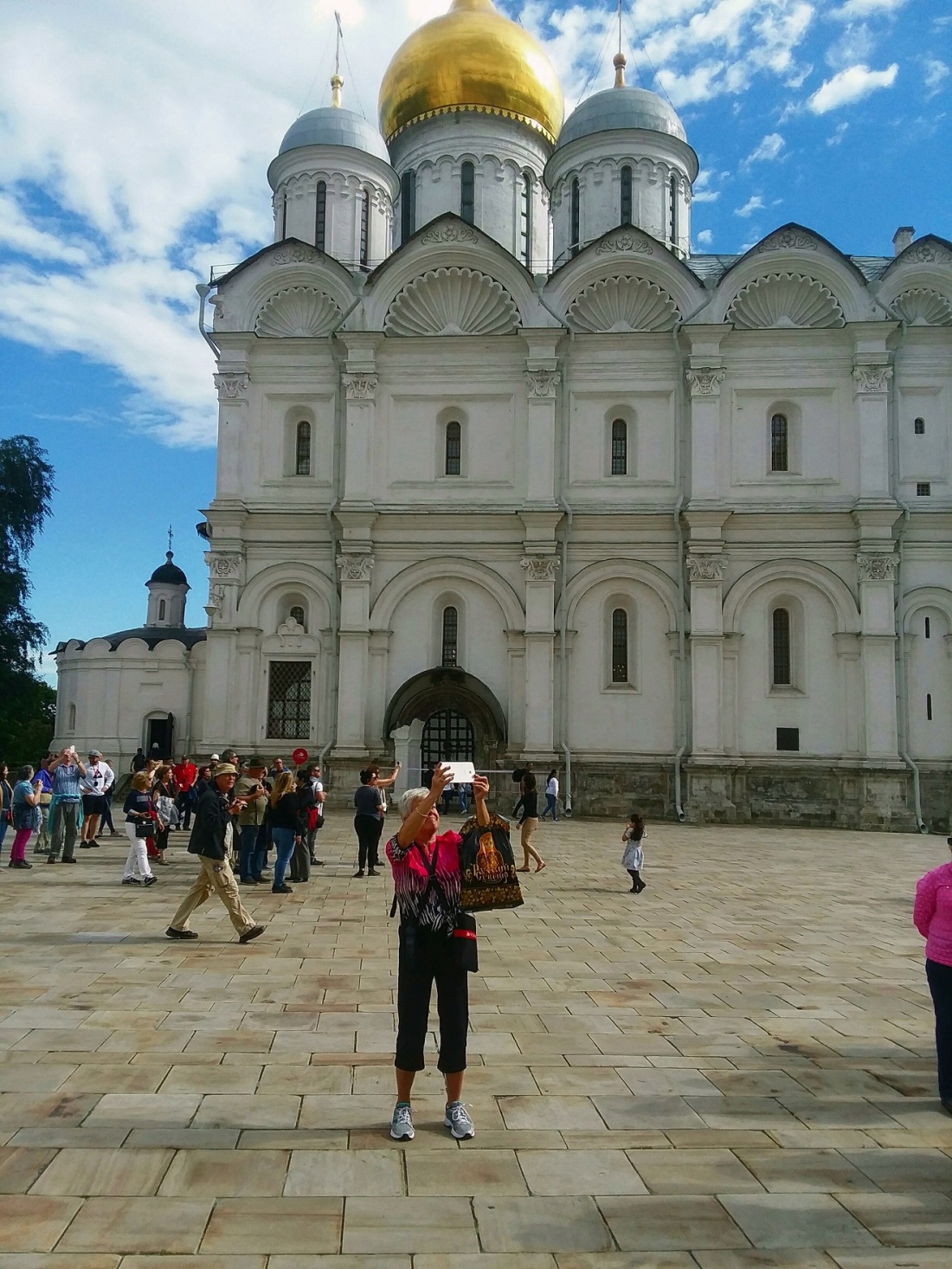 [Our guide readies us for an assault on Archangel Cathedral . . . ]

[The Super and I decided to sit outside in the great weather . . . ]

[And these two young ladies made folly of the usual static selfie!] 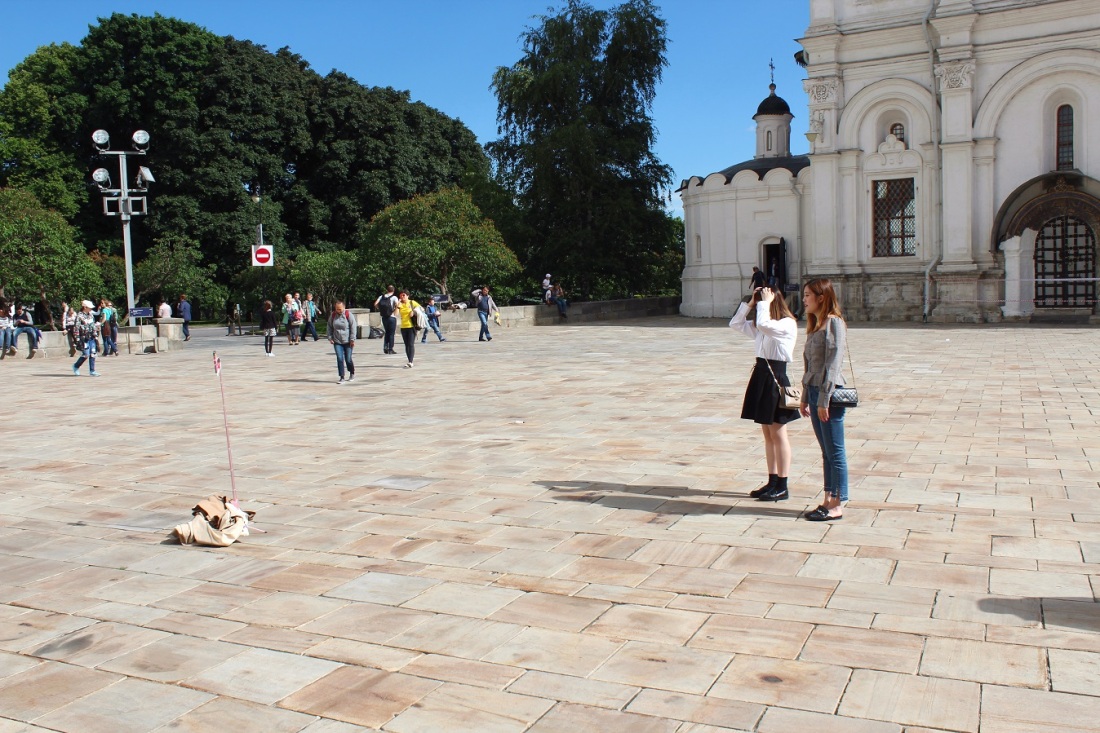 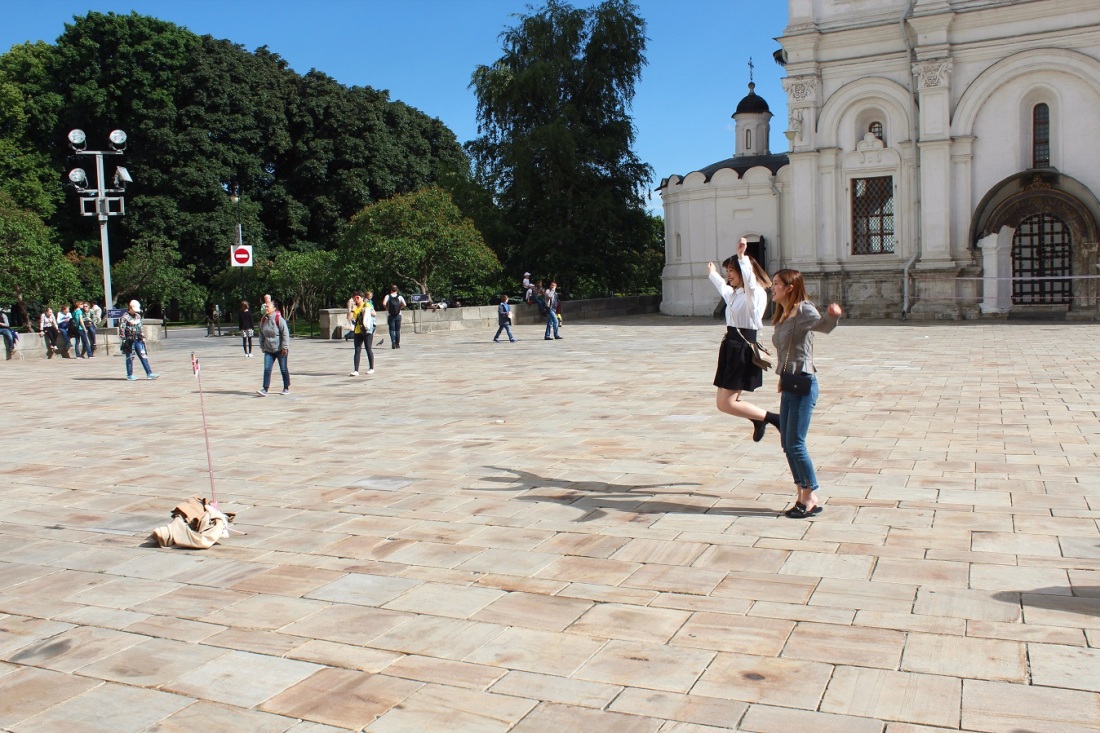 [With a vertical free standing selfie-stick . . . ] 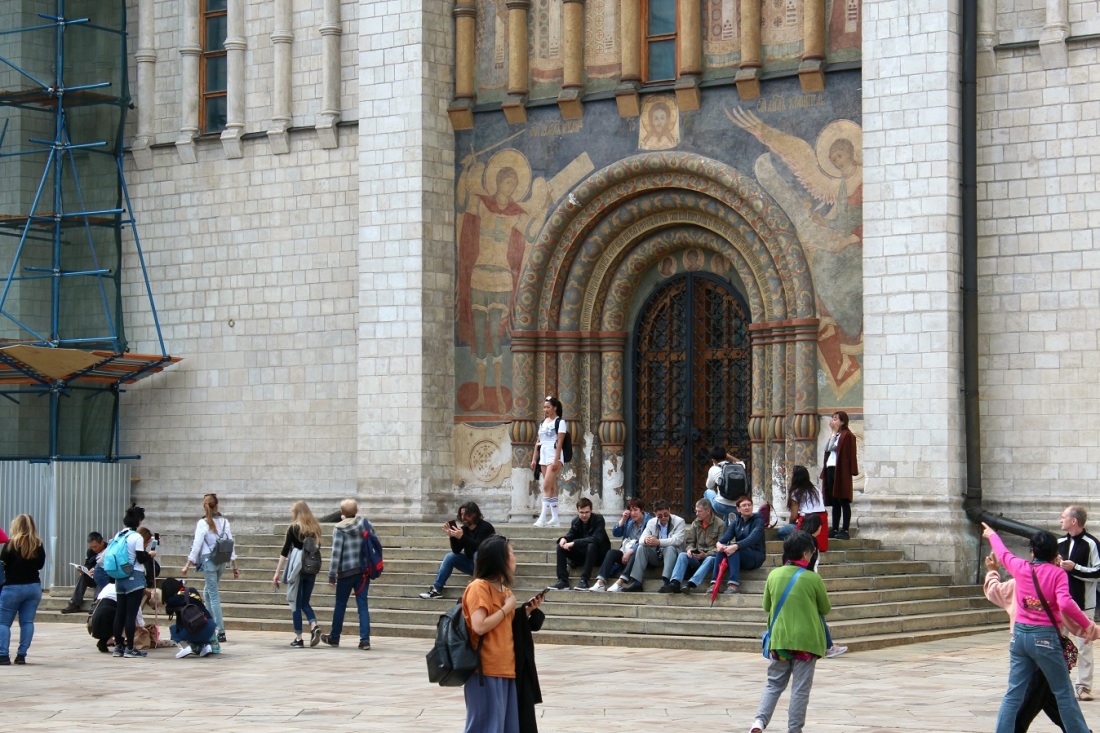 [Amongst the cathedrals was this building.  I know it was discussed – maybe something to do with the exterior design or material.  But I couldn’t find anything on it?]

[On the right, Ivan the Great Bell Tower, the tallest structure on the square . . . ]

[Leaving Ivan the Great Bell Tower and the Tsar bell . . . ]

[We’re on the bus heading back to the ship, past some familiar sights . . . ] 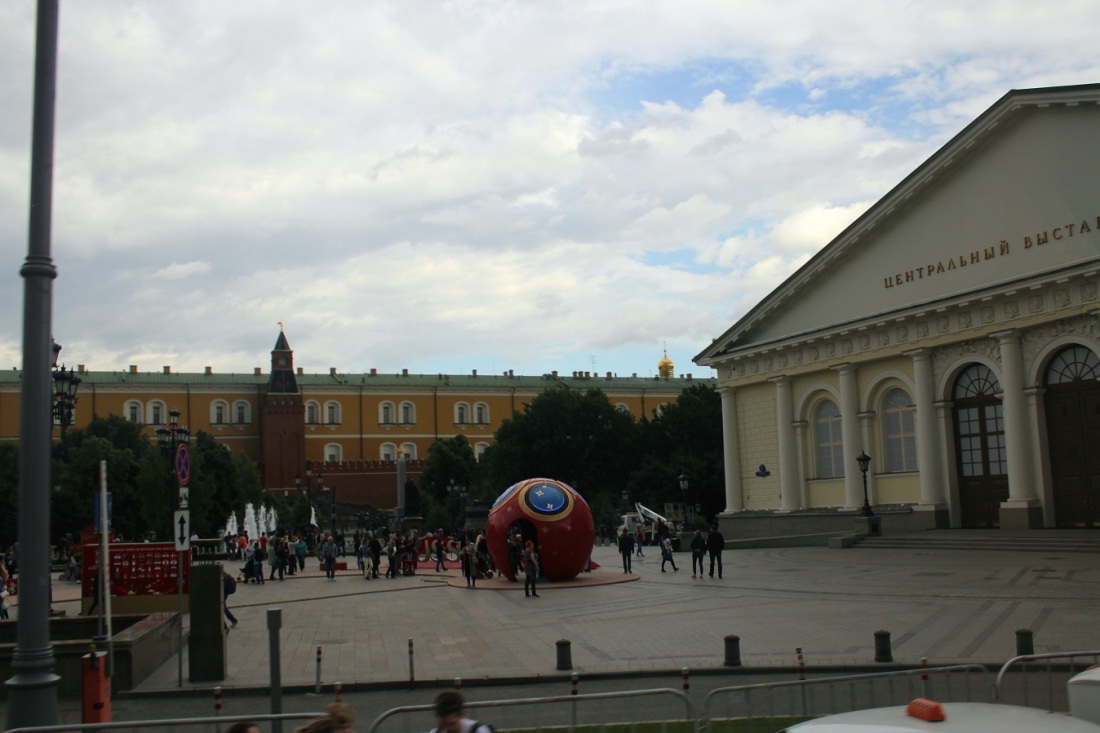 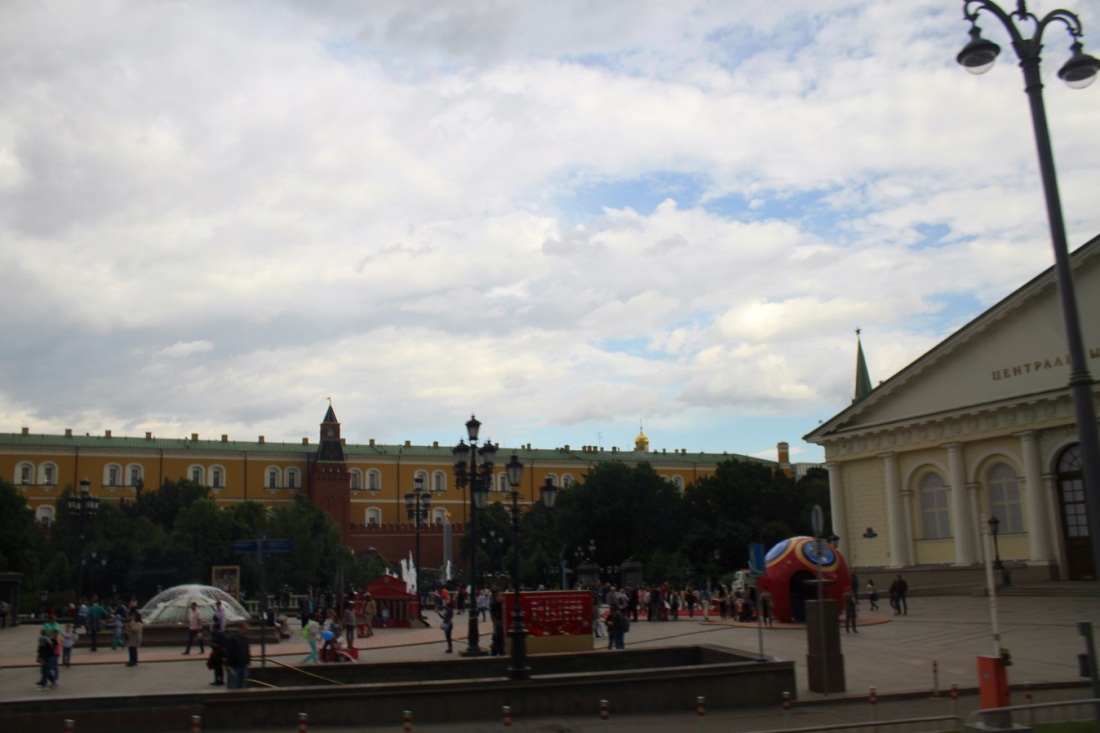 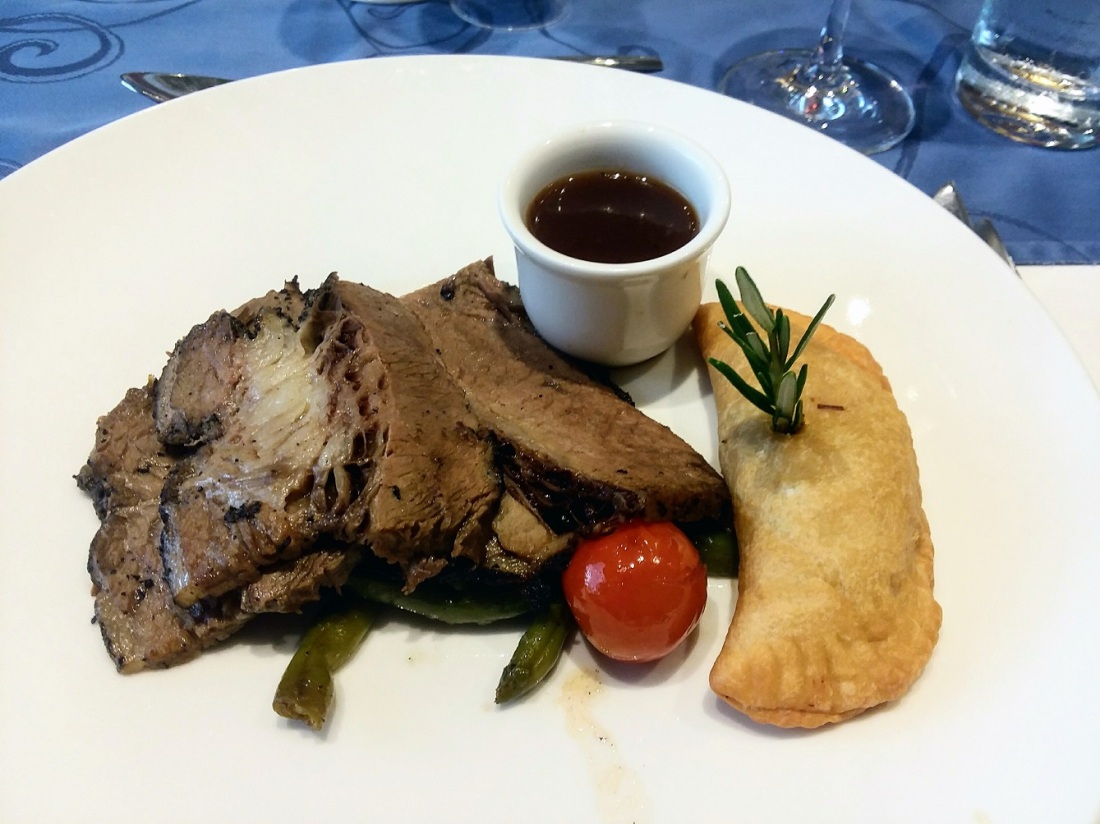 [“Weakie,” it’s only appropriate we wrap up with foodies.  We head for Minnesota via Paris in the morning . . . ]

Travel is fatal to prejudice, bigotry, and narrow-mindedness.  ~  Mark Twain