[Walking away from the port, I got a chance to work on my Catalan.  Now that I know “obert” means “open,” and educated guess would be that the African reserve is “open all year.”  Correctamundo!] 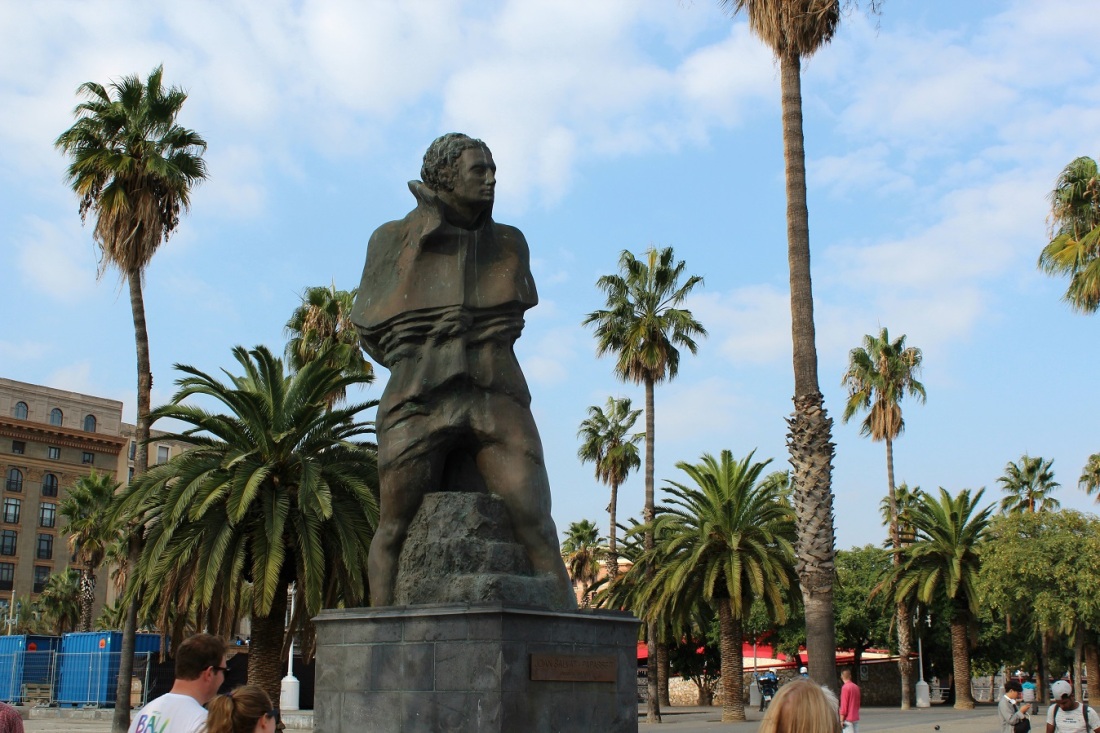 [Spain’s flag, over a government building?]

[We were looking for a way to street level, but this one was blocked?]

[Bunch of cool-looking, unidentified buildings – note the giant prawn on the lower left, soon to be identified . . . ] 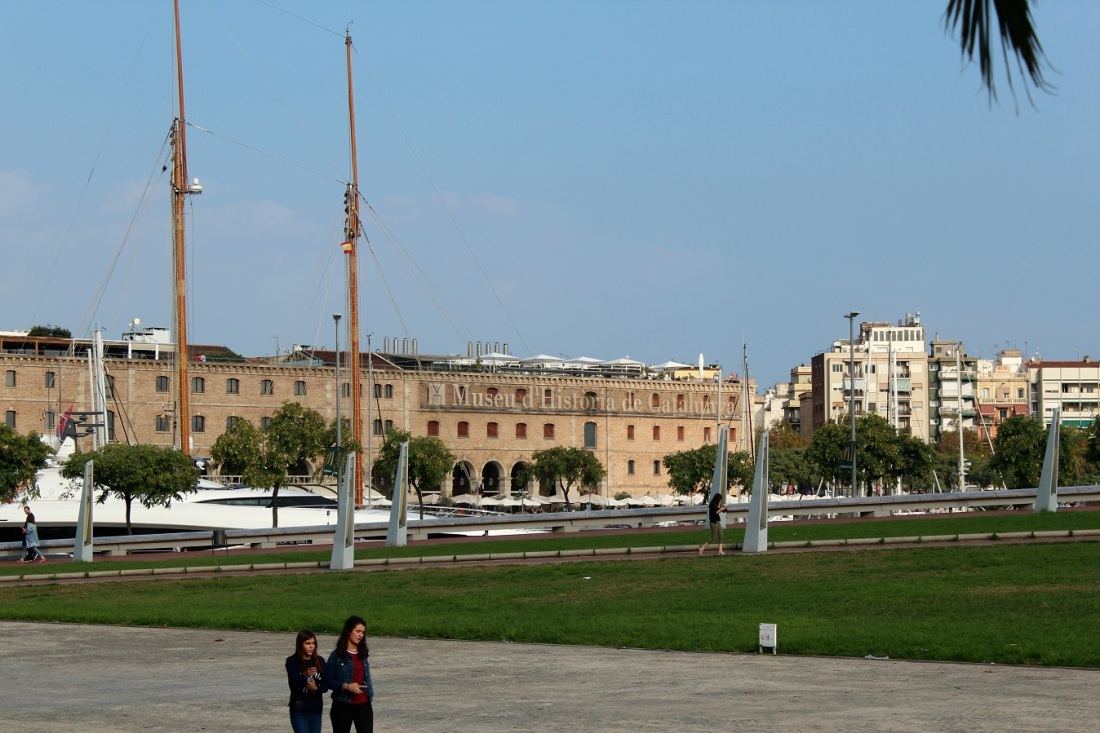 [And off the waterfront, beginning our walkabout . . . ] 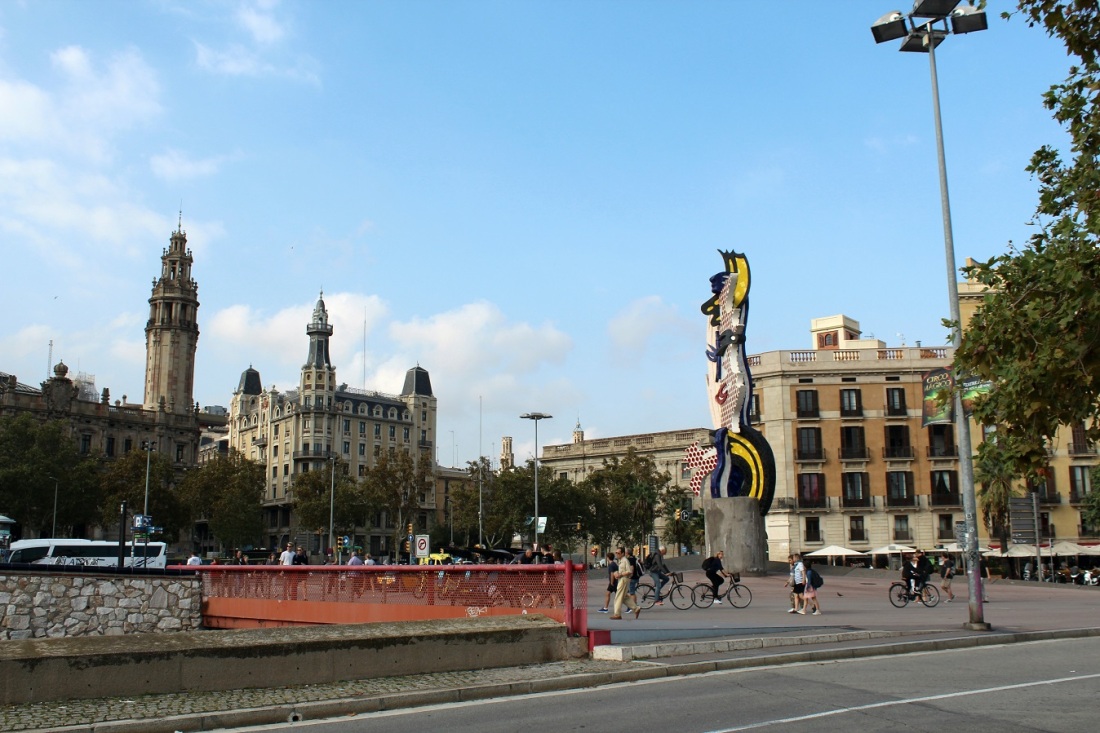 [Previously shot from below along the waterfront . . . ] 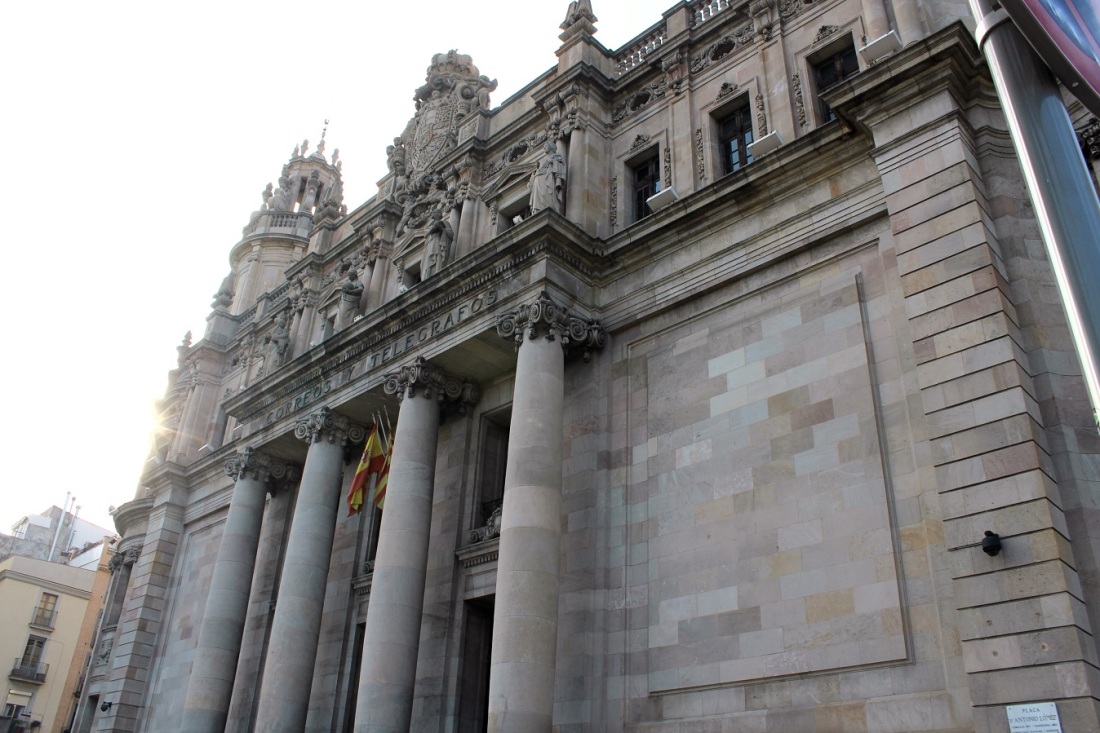 [The Gothic Quarter is the centre of the old city of Barcelona.  It stretches from La Rambla to Via Laietana, and from the Mediterranean seafront to the Ronda de Sant Pere.  It is a part of Ciutat Vella district.  The quarter encompasses the oldest parts of the city of Barcelona, and includes the remains of the city’s Roman wall and several notable medieval landmarks.  Much of the present-day fabric of the quarter, however, dates to the 19th and early 20th centuries.  El Call, the medieval Jewish quarter, is located within this area, along with the former Sinagoga Major.  The Barri Gòtic retains a labyrinthine street plan, with many small streets opening out into squares.  Most of the quarter is closed to regular traffic although open to service vehicles and taxis (Wikipedia).] 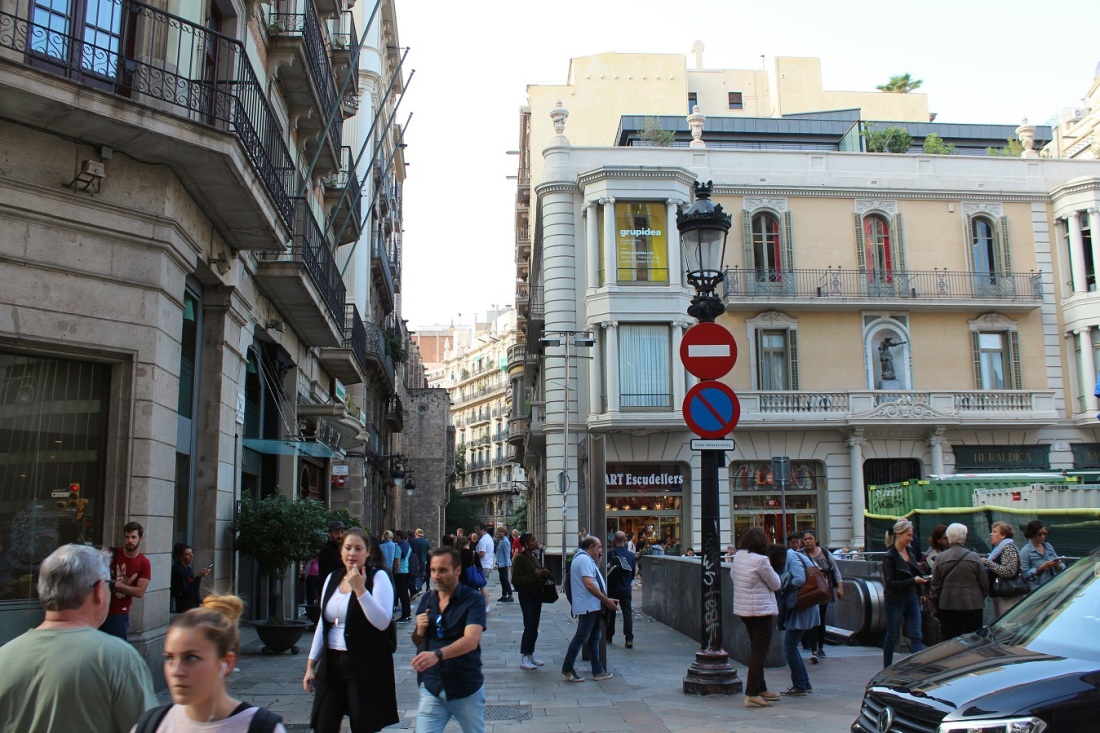 [This life size bronze equestrian statue of Ramon Berenguer III was sculpted by Frederic Marès and inaugerated in 1950. Located in Plaça Ramon Berenguer el Gran, the monument is a replica of an earlier statue which was created by Josep Llimona for the Barcelona Universal Exposition of 1888. The Count, who ruled Barcelona from 1097 to 1131, is portrayed in regal pose riding his horse Danc. The ancient Roman walls of Barcelona and the medieval Palau Reial make a perfect backdrop (barcelonalowdown.com).] 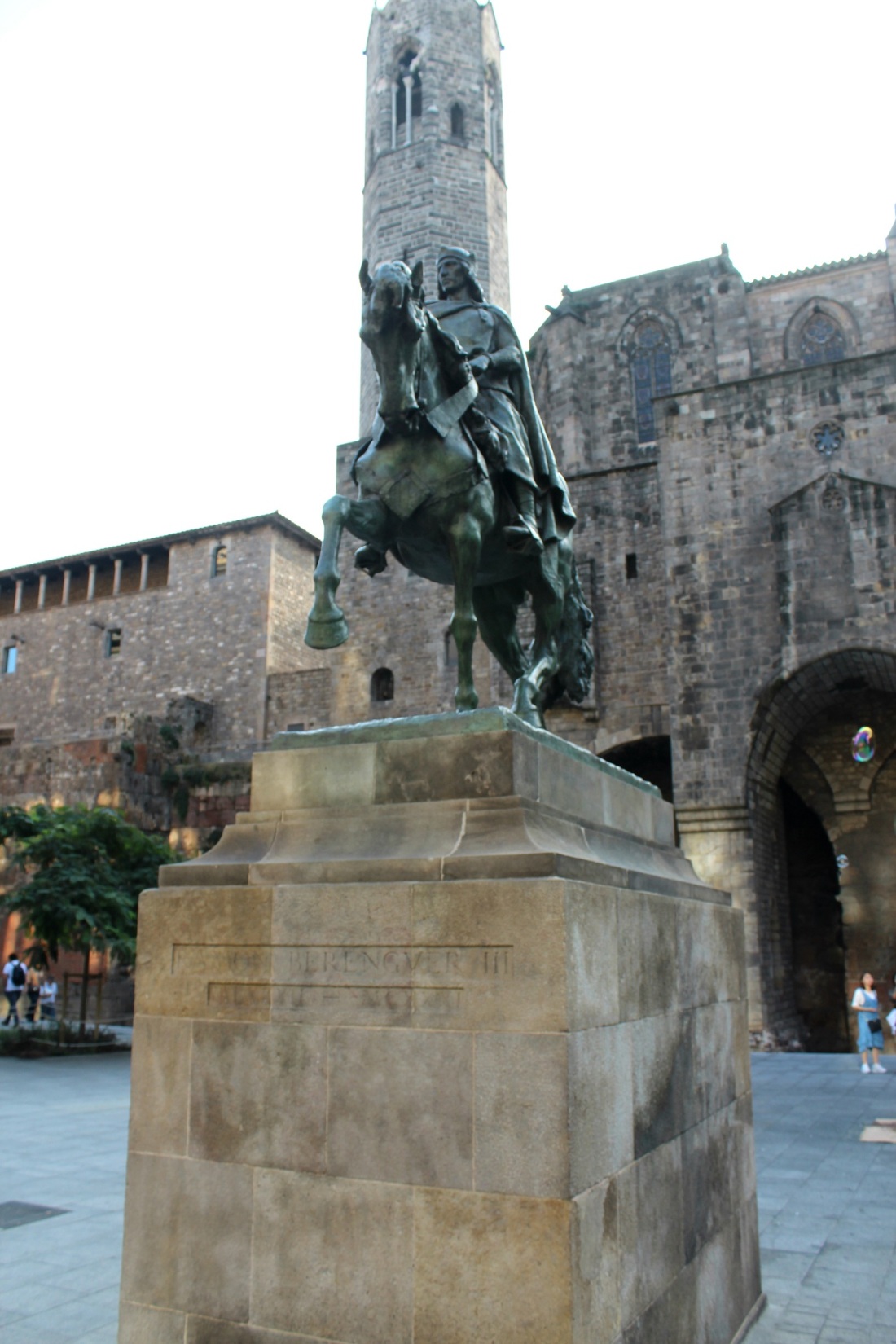 [Bubbles and kids (neither of which are Gothic)!] 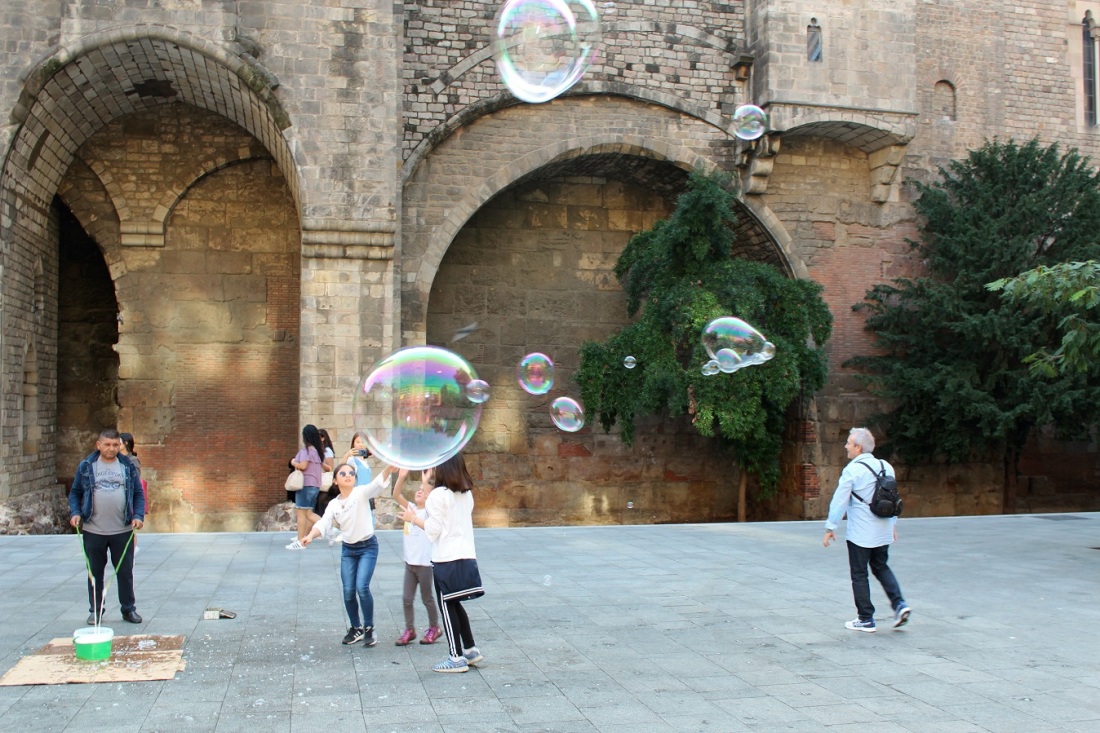 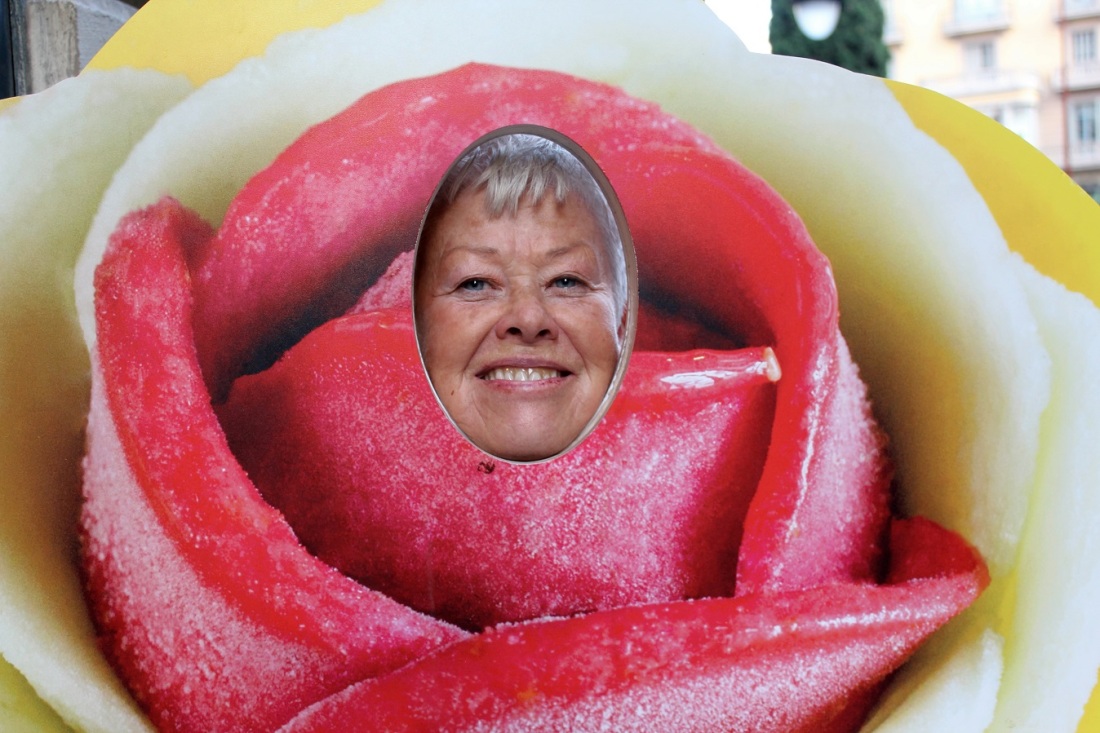 [The Cathedral of the Holy Cross and Saint Eulalia, also known as Barcelona Cathedral, is the Gothic cathedral and seat of the Archbishop of Barcelona.  The cathedral was constructed from the thirteenth to fifteenth centuries, with the principal work done in the fourteenth century. The cloister, which encloses the Well of the Geese (Font de les Oques) was completed in 1448.  In the late nineteenth century, the neo-Gothic façade was constructed over the nondescript exterior that was common to Catalan churches.  The roof is notable for its gargoyles, featuring a wide range of animals, both domestic and mythical (Wikipedia).] 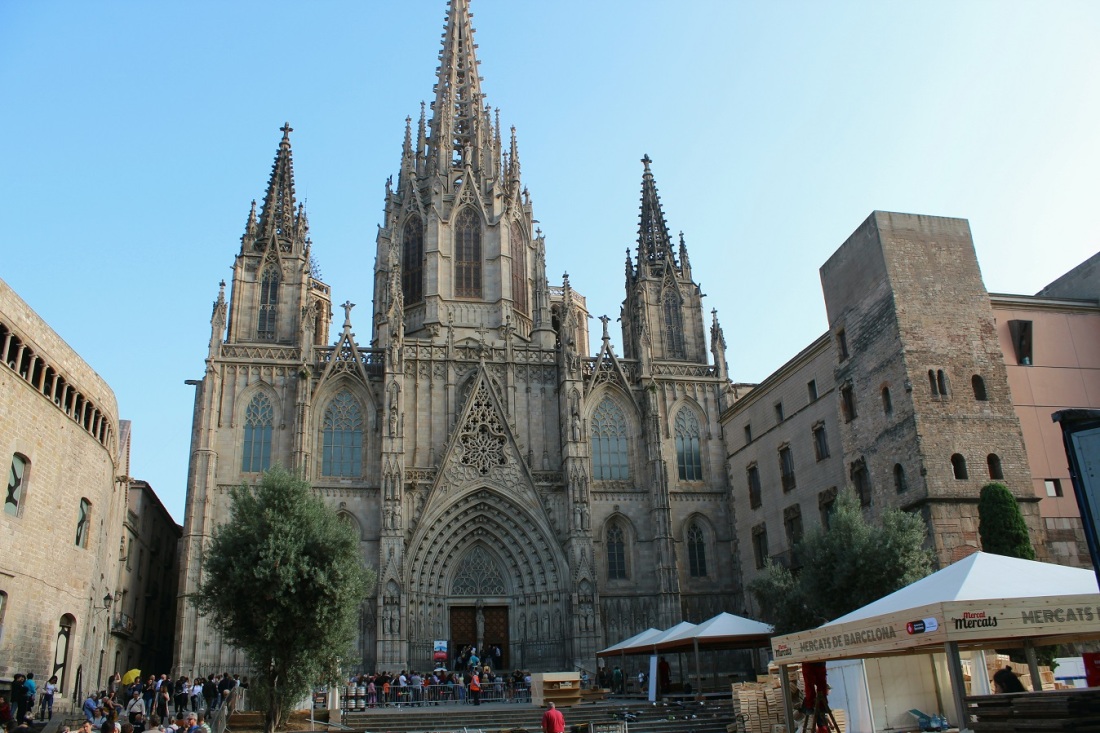 [Double checking our location in the “shadow” of the cathedral . . . ] 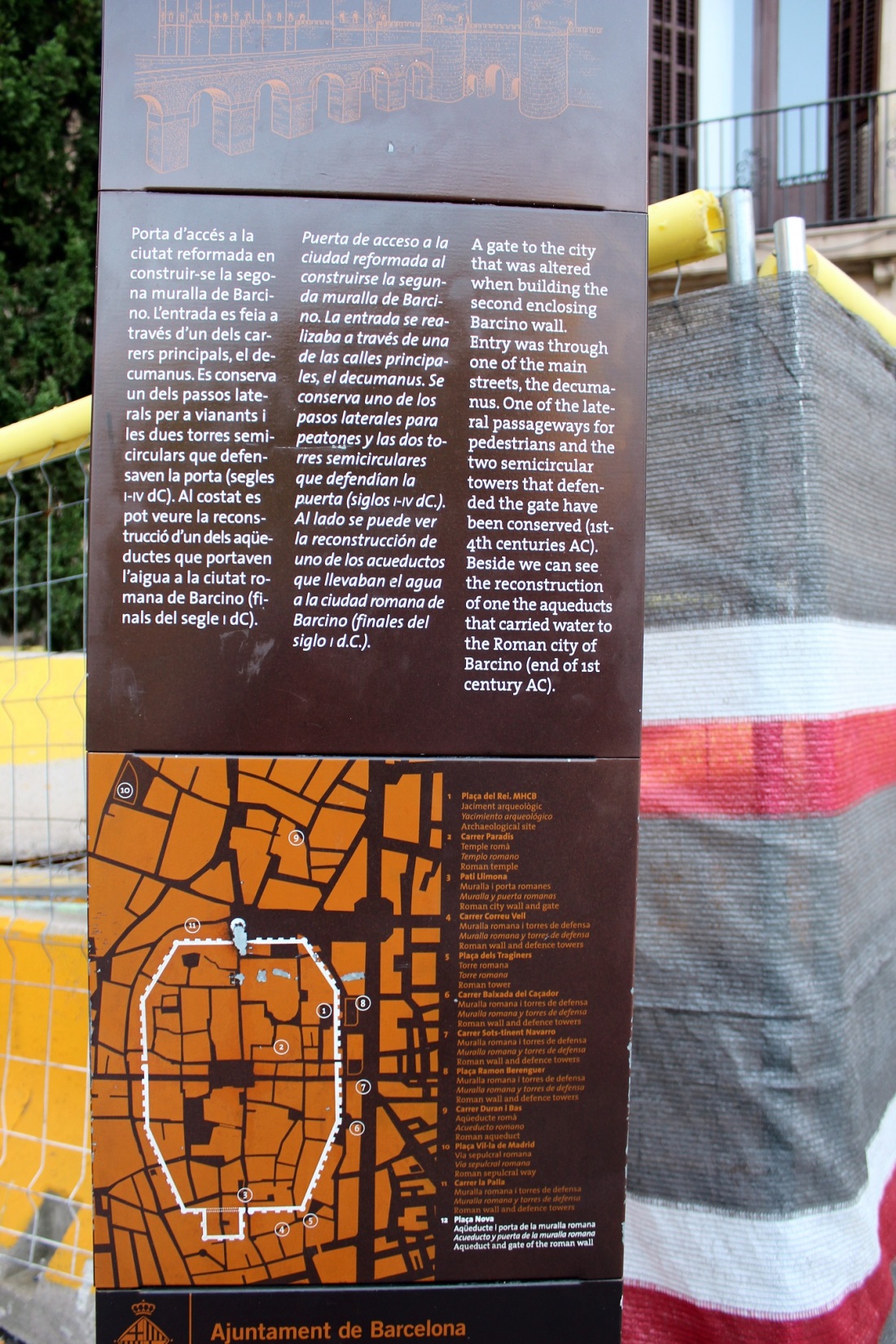 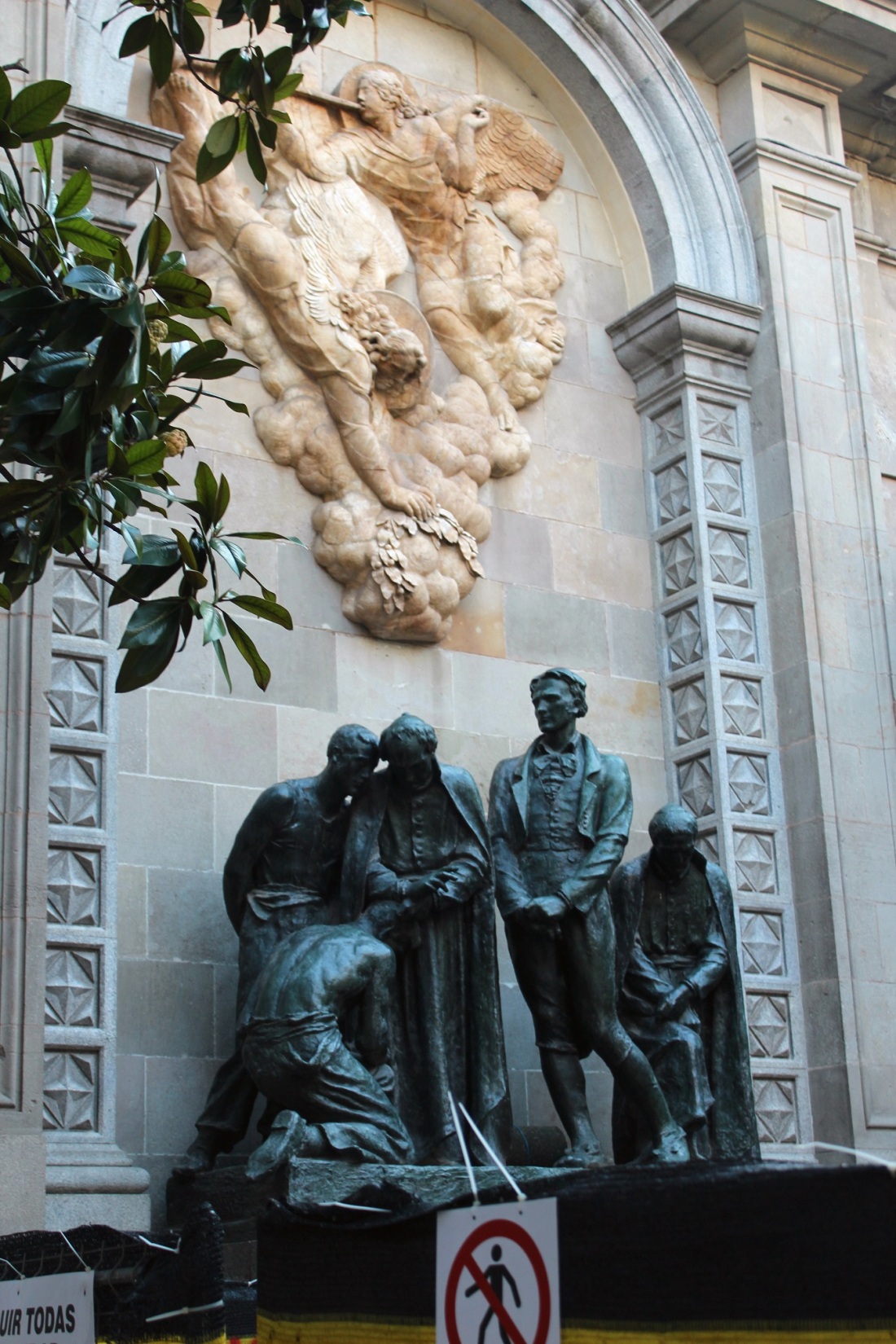 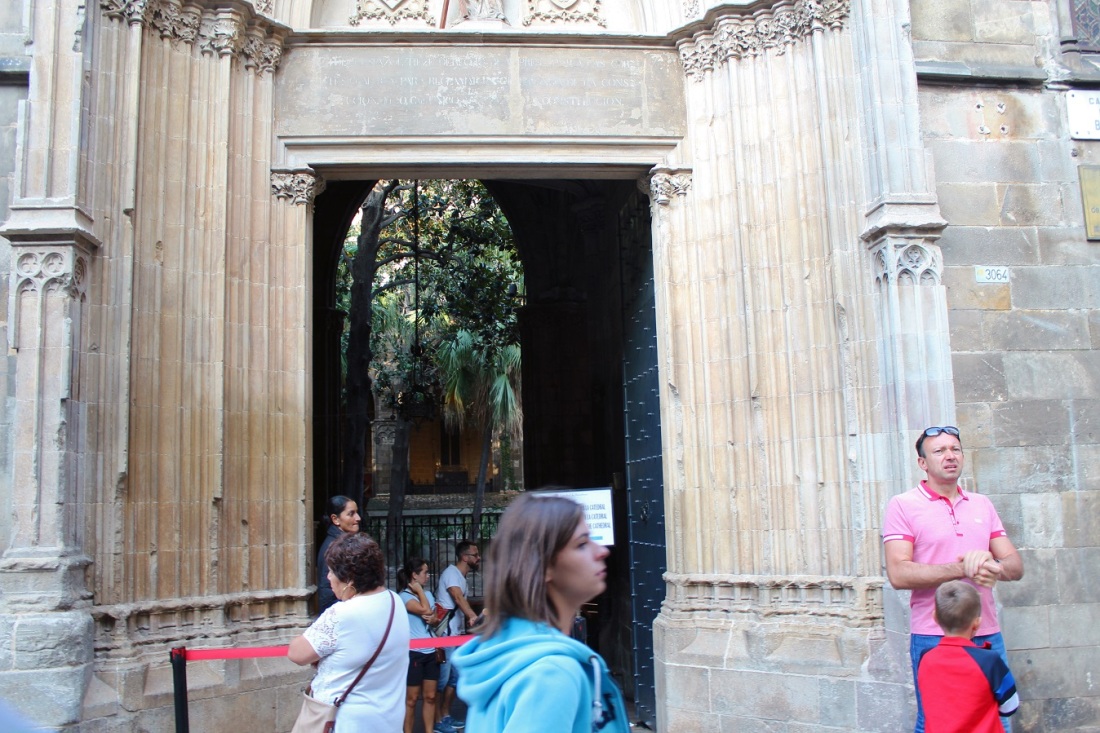 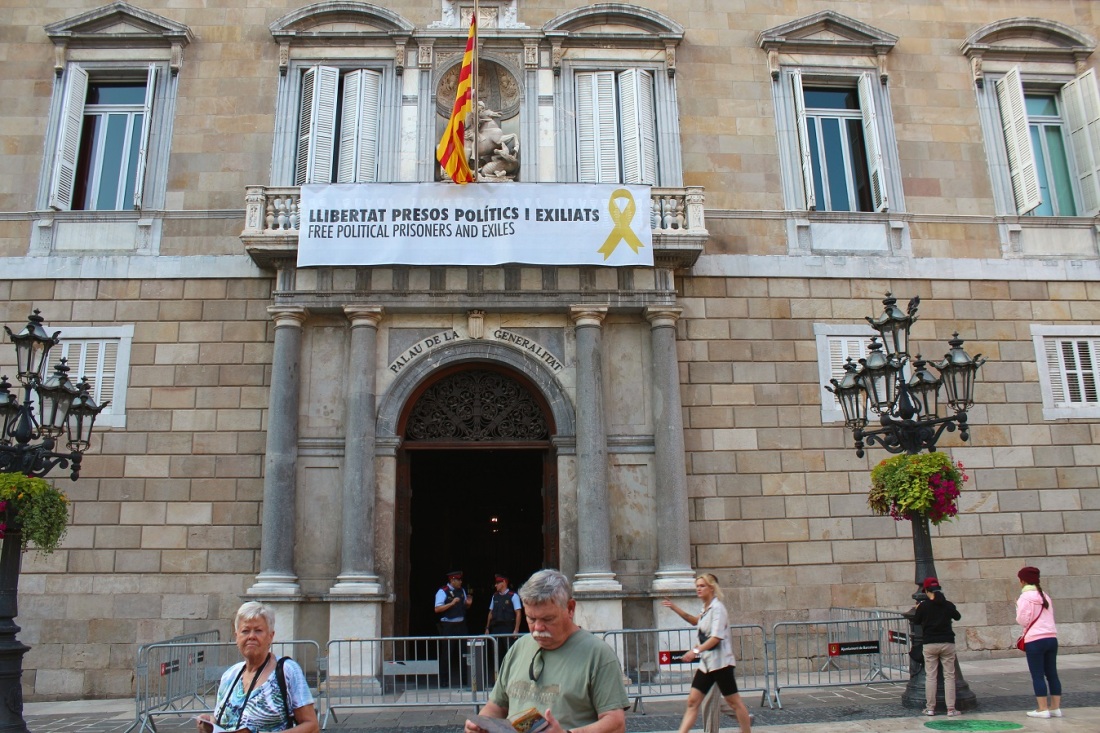 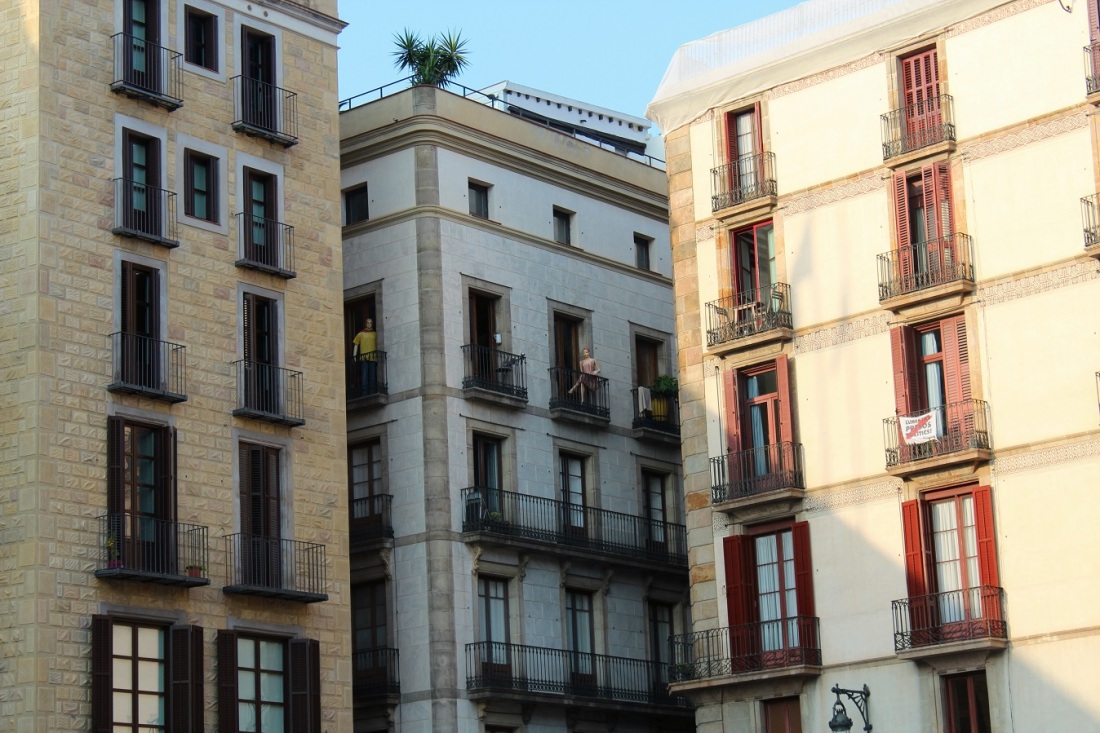 [The mannequins on the balconies?]

[Antoni Llena’s chicken wire tribute to Castellers.  Located in Plaça de Sant Miquel behind Barcelona’s City Hall, this unusual 26.5m high stainless steel tower by Antoni Llena i Font was unveiled in 2012 during the Feast of Santa Eulalia.  The statue is titled Homenatge als Castellers and is a tribute to the emblematic human towers which are a traditional feature of public events in Catalonia (barcelonalowdown).] 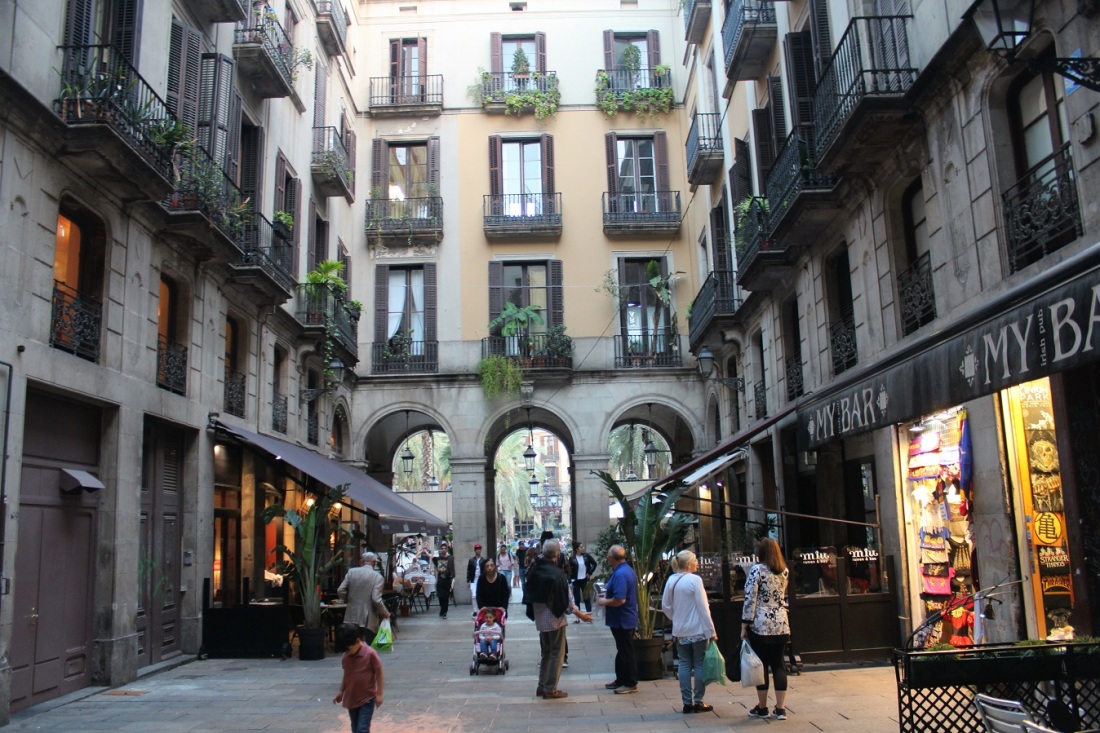 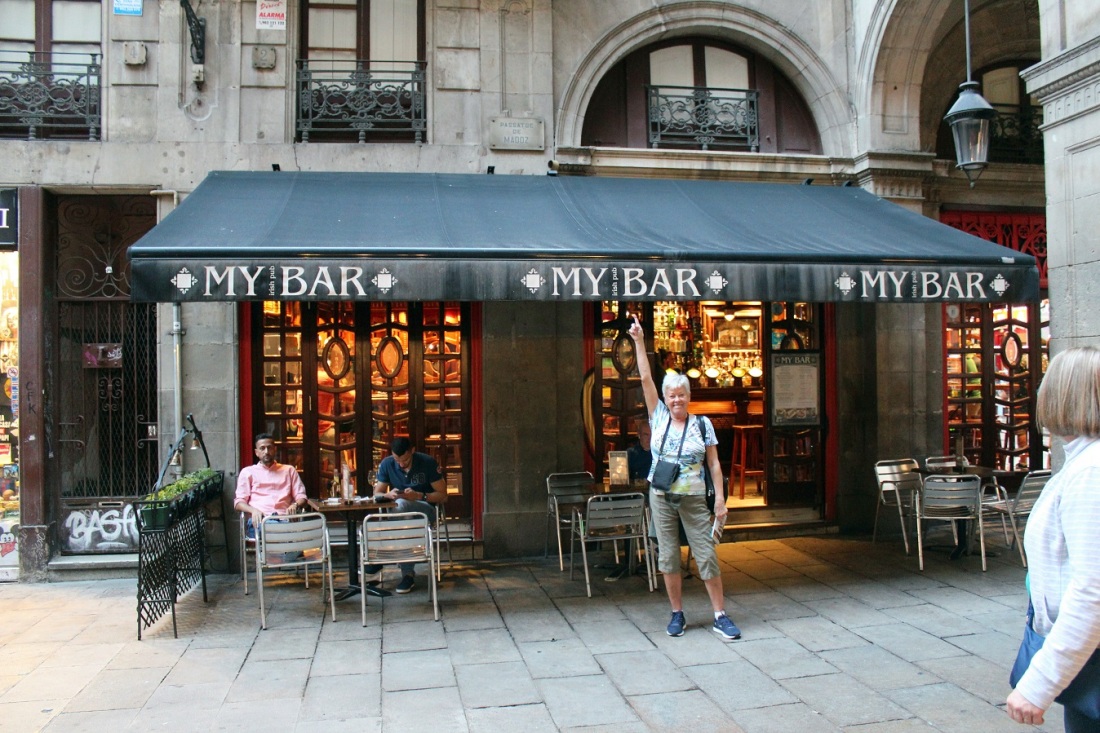 [And this is what we accidentally stumbled into . . . ]

[Plaça Reial is a square in the Barri Gotic.  It is to La Rambla, and is a well-known tourist attraction, especially at night. On the plaza are a large number of restaurants and some of the city’s most famous nightclubs, including Sidecar, Jamboree, and Karma. The square is the site of the Hotel Roma Reial and club, and is also known for its many outdoor venues. It is a popular meeting place during the summer, during the annual La Merce festival in September when open-air concerts take place, and during other celebrations such as New Year’s Eve (Wikipedia).] 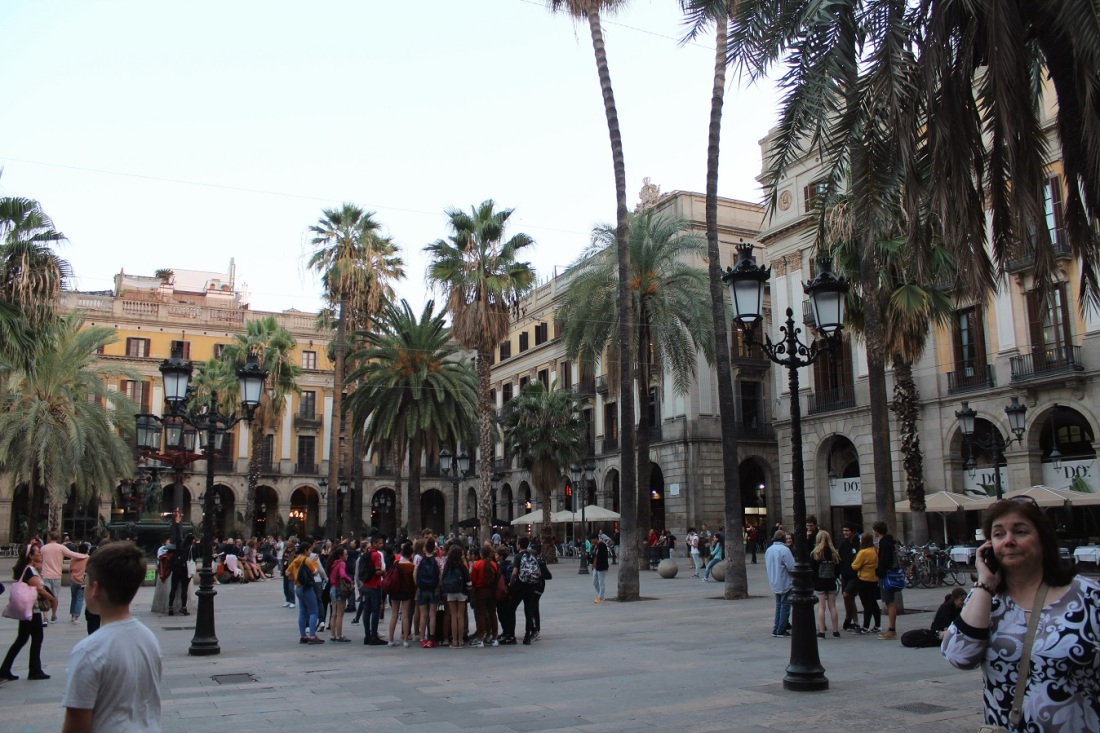 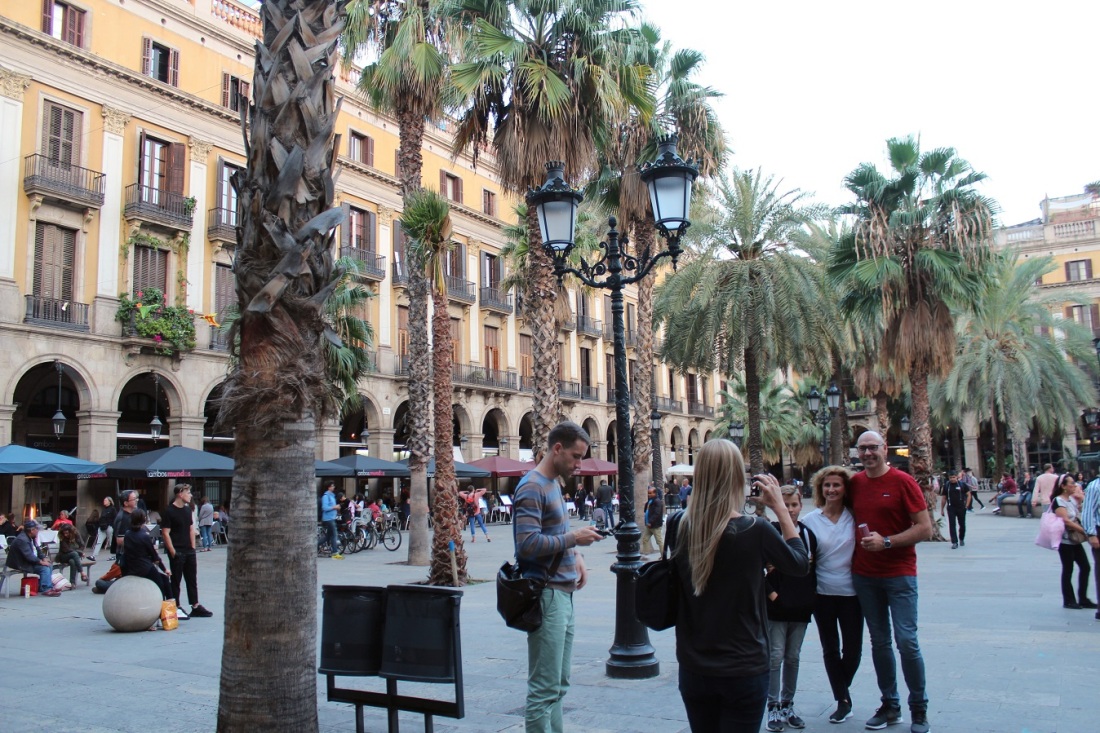 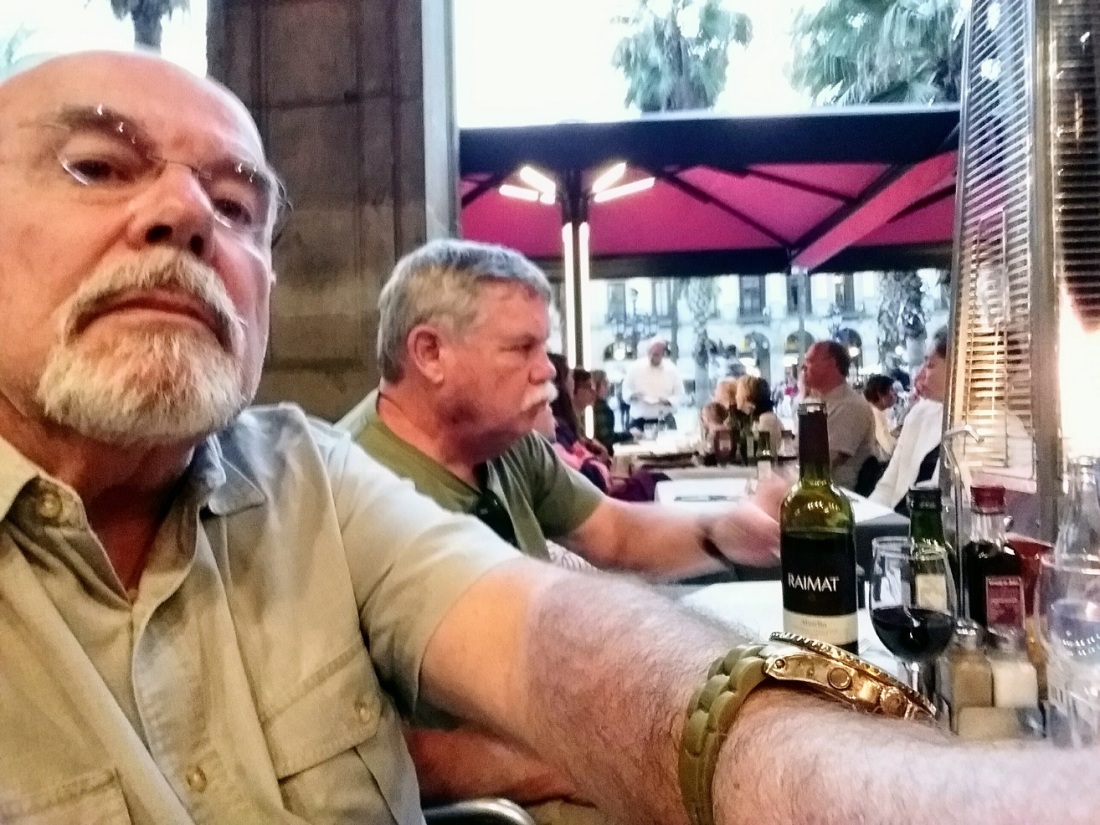 [Of course, I can no longer remember the name of the specific restaurant . . . ] 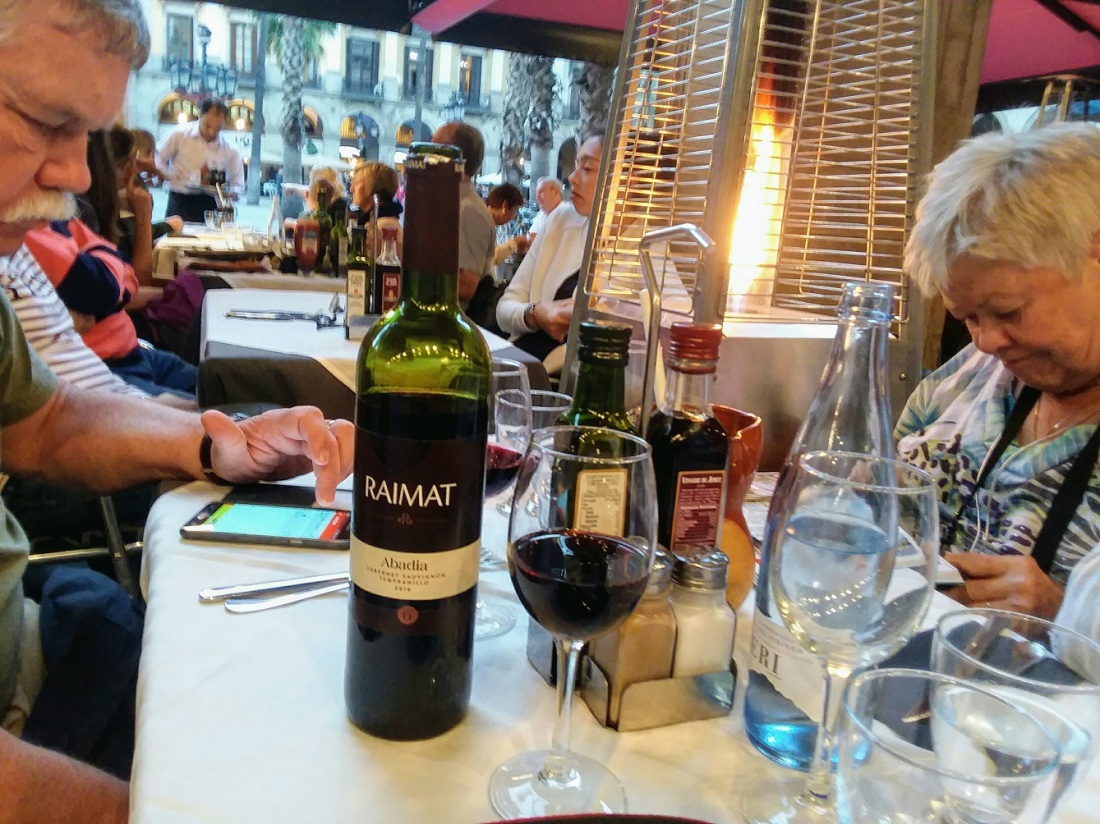 If you’re too open-minded; your brains will fall out.  ~  Lawrence Ferlinghetti

Up Next:  Yup, Barcelona