Continuing our stroll through Madrid . . .

[This small stone slab in Madrid’s city square marks the geographical center of Spain. The marker sets the Zero Kilometer point, the point from which distances are measured in Spain—specifically, it’s the starting point for measuring the the distances of the country’s six national roads, A-1 to A-6.  Kilometre Zero is also the starting point for Madrid’s numbered streets; the closer to the Km 0 mark, the lower the street number.  These traditional markers are common to find in many countries, often located in the capital city. (It’s believed they were also traditionally used to measure driving distances in guidebooks, as the spot where drivers marked their odometers at zero.) The most famous milestone marker however is the “Golden Milestone” (Milliarium Aureum) in Ancient Rome, which is believed to be the source of the saying “all roads lead to Rome.”  Spain’s Kilometre Zero is in the middle of Madrid’s Puerta del Sol, the historic semi-circular city square. The slab is quite easy to miss, situated on the ground outside the clock tower on the old Post Office building. (Incidentally the old clock is also believed to have kept official time in Spain.)  The plaque was placed here in 1950 and replaced with a newer stone in 2002 and again in 2009. It was turned around 180 degrees by mistake in 2002 during a reform of the square. The plaque was renewed in 2009, during the roadworks of the Puerta del Sol square, and this time placed in the right poistion.  (http://www.atlasobscura.com/places/kilometre-zero)  The Super and Anne are the models.]

[The Congress of Deputies is the lower house of the Cortes Generales, Spain’s legislative branch. It is located in the Palace of the Parliament.  It has 350 members elected by constituencies (matching fifty Spanish privnces and two autonomous cities by proportional representation using the D’Hondt method.  Deputies serve four-year terms.  The President of the Congress of Deputies is the analogue to a speaker and presides over debates (Wikipedia).]

[From this government area, looking down to the Fountain of Neptune located in the Plaza de Cánovas del Castillo . . . ]

[The Paseo del Prado is one of the main boulevards. The Paseo del Prado is the oldest historical urban in Madrid and was declared Bien de Interes Cultural. It runs north-south between the Plaza de Cibeles and the Plaza del Emperador Carlos V (or Plaza de Atocha), with the Plaza de Canovas del Castillo (Neptune, and of the Ritz and Palace five-star hotels) lying approximately in the middle. The Paseo del Prado forms the southern end of the city’s central axis.  This densely tree-lined, wide and centric avenue is a landmark for the city residents and the location of important cultural and tourist spots in the city, including the so-called Golden Triangle of Art, which encompasses three museums, including the Prado (Wikipedia).] 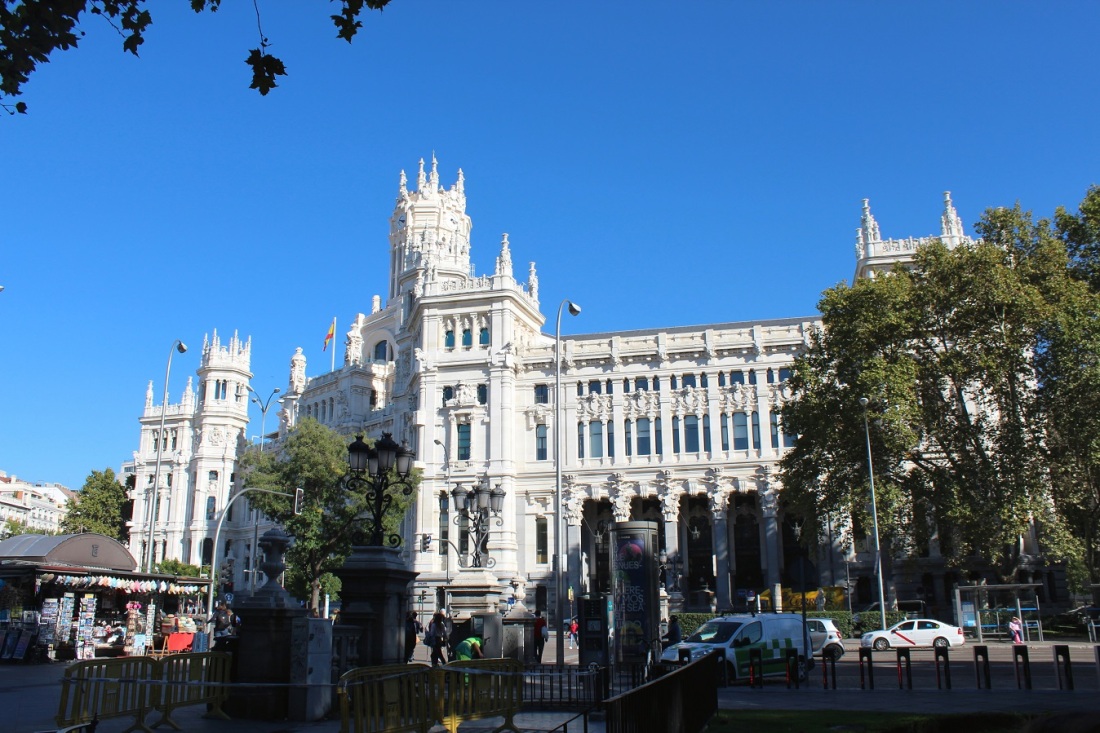 [The Plaza de Cibeles is a square with a neo-classical complex of marble sculptures with fountains that has become an iconic symbol for the city. It sits at the intersection of Calle de Alcala (running from east to west), Paseo de Recoletos (to the North) and Paseo del Prado (to the south) (Wikipedia).] 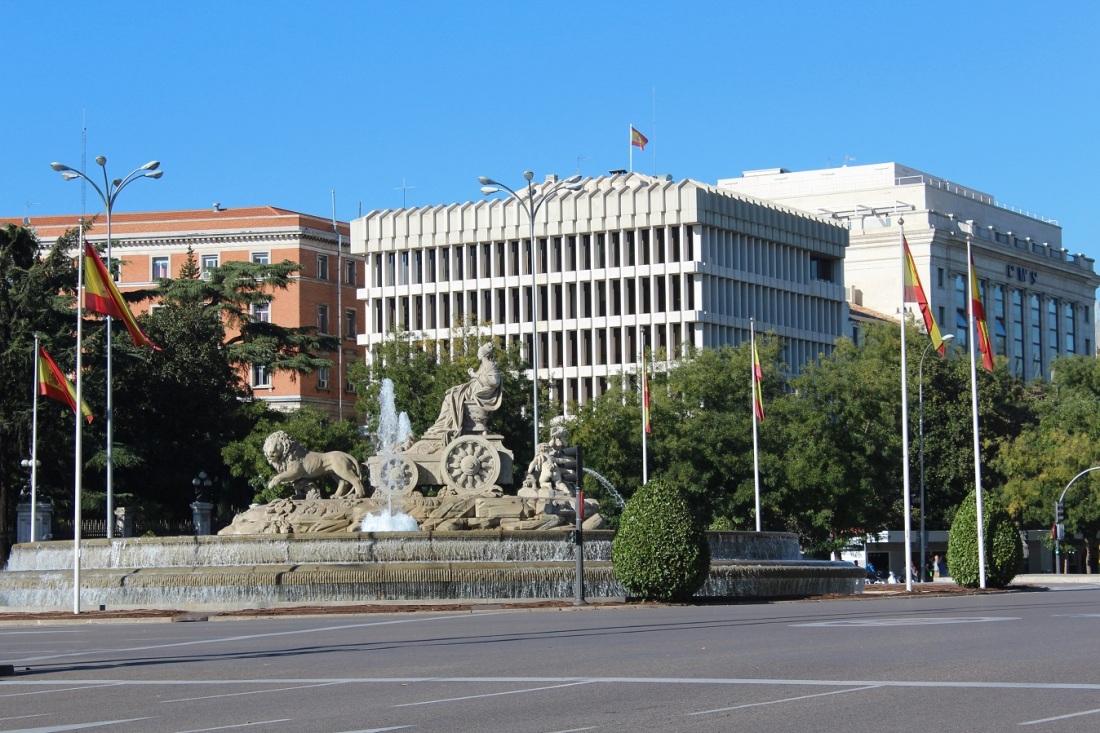 [Per Sebastian, this is where the Madrid citizenry comes to celebrate major soccer (OK, futbol) victories . . . ] 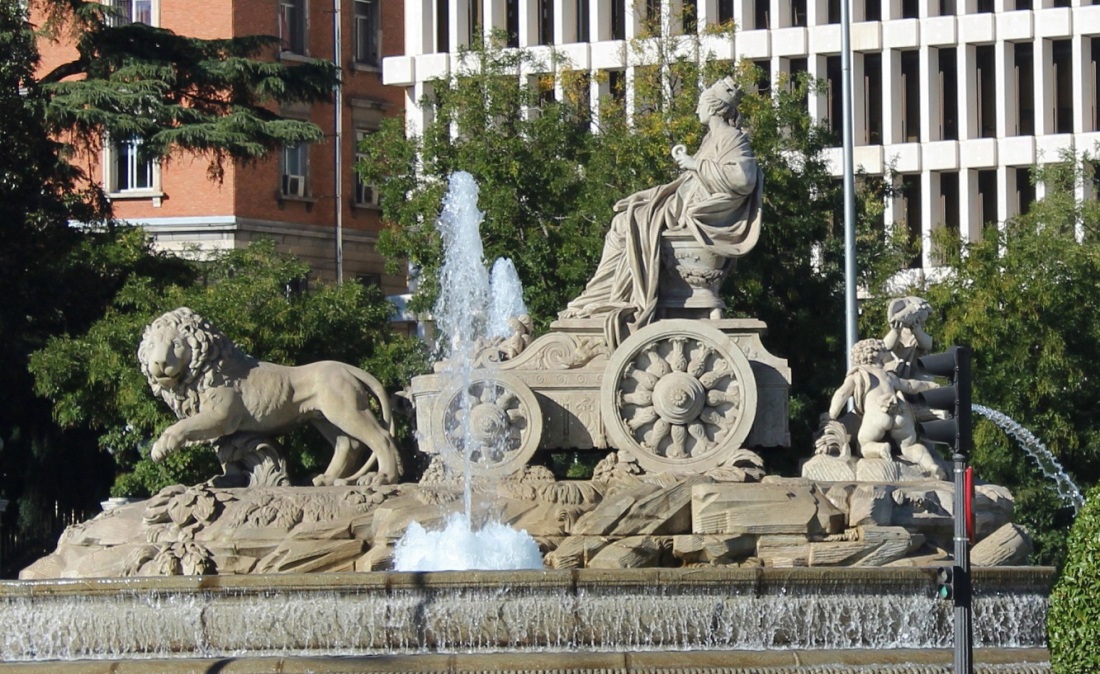 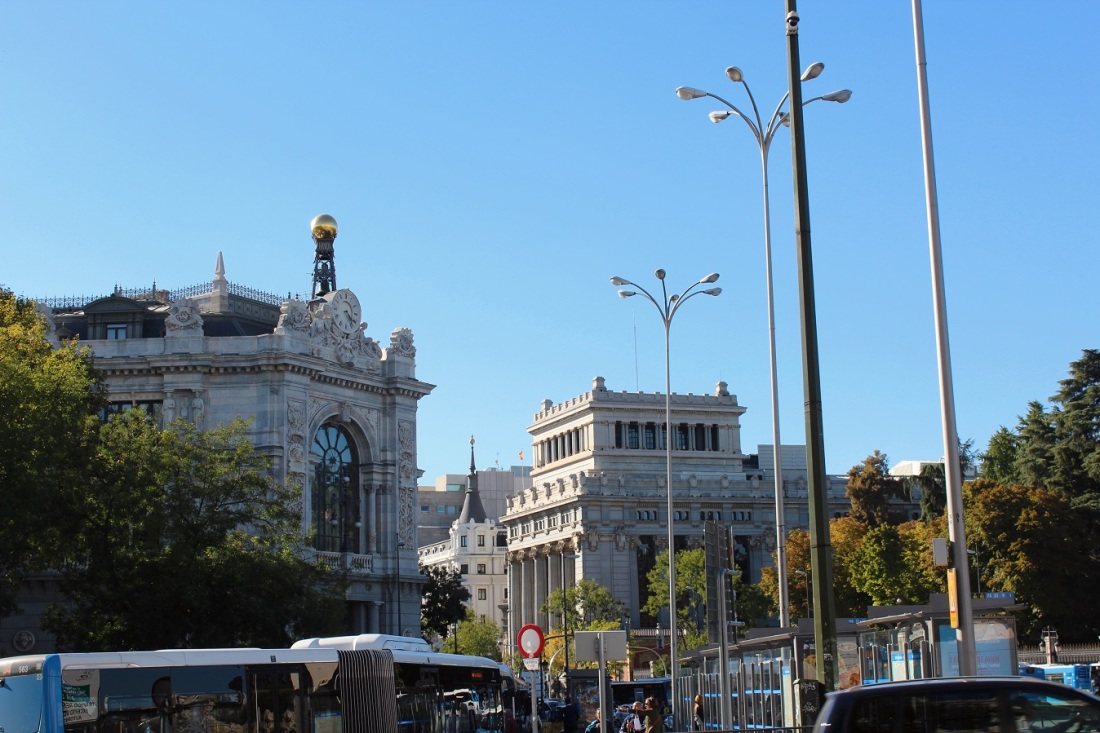 [Where everything is in relation to Puerta de Alcalá (Alcala Gate) . . . ]

[The Puerta de Alcalá is a Neo-classiclal monument in the Plaza de la Independencia. It is regarded as the first modern post-Roman triumphal arch built in Europe, older than the similar monuments Arc de Triomphe in Paris and Brandenburg Gate in Berlin.  It was a gate of the former Walls of Philip IV. It stands near the city center and several meters away from the main entrance to the Parque del Buen Retiro. The square is bisected by Alcala Street, although the street does not cross through the monument, and it is the origin of the Alfonso XII, Serrano and Olózaga streets. It was inaugurated in 1778 (Wikipedia).  This is the West side, front view.] 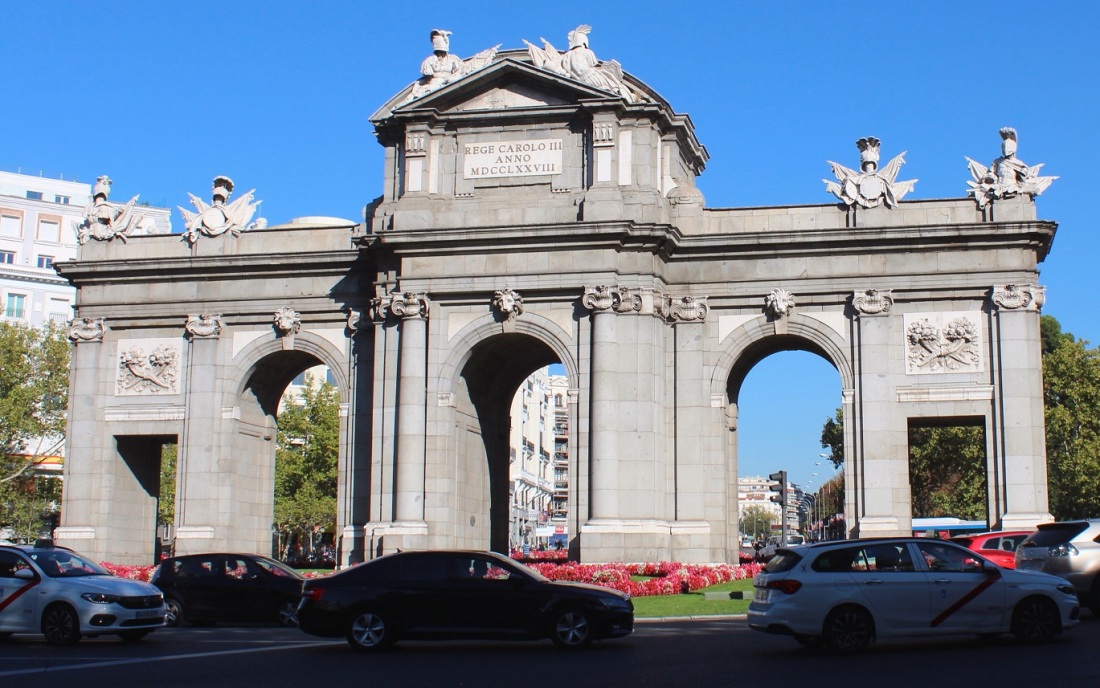 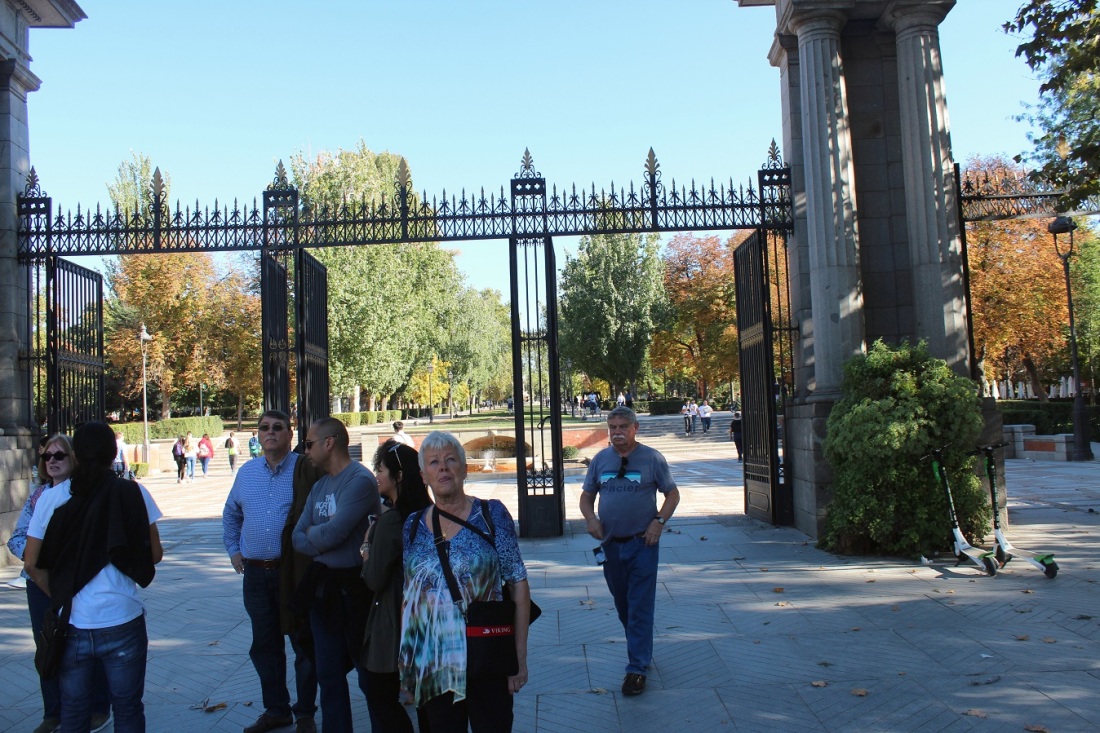 [Guide Sebastian is saying adios, leaving us all alone in the big city . . . ] 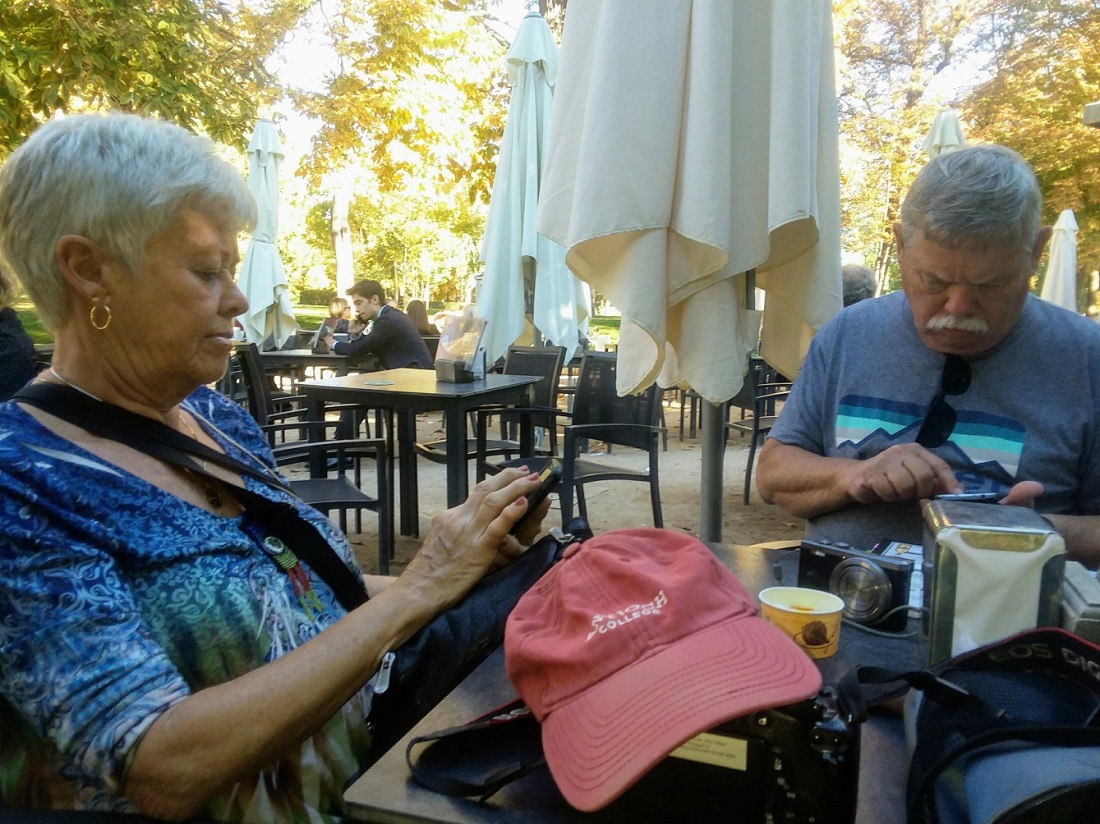 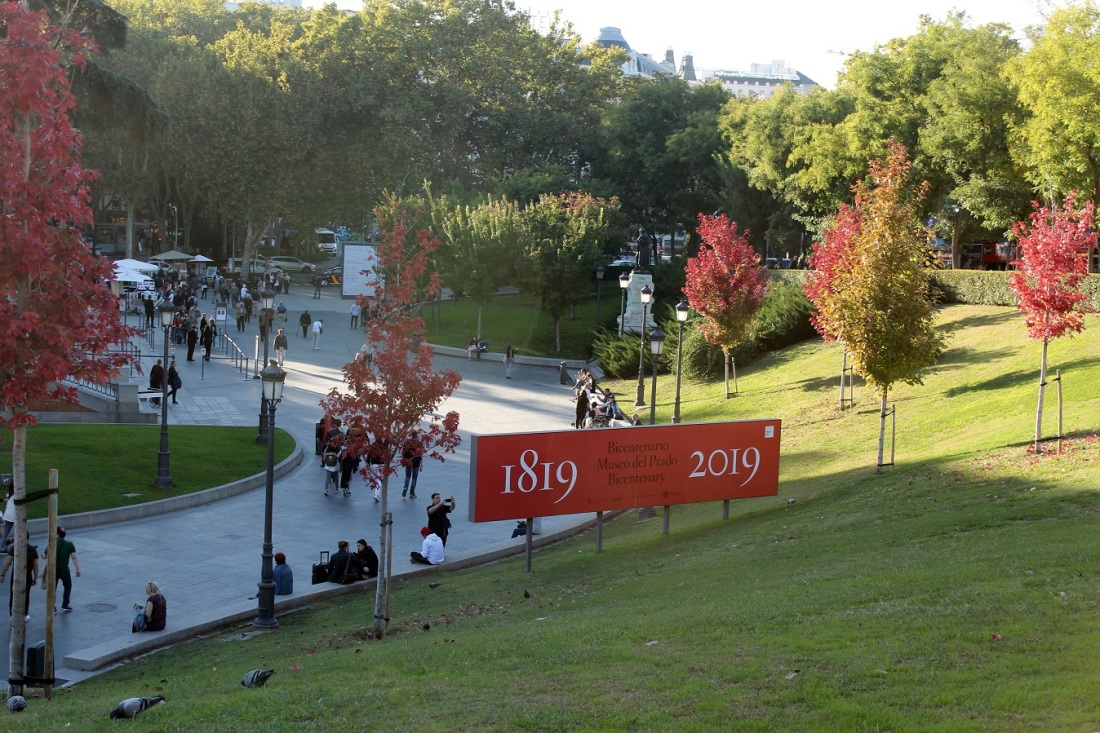 [The Prado Museum is the main Spanish national art museum. It is widely considered to have one of the world’s finest collections of European art, dating from the 12th century to the early 20th century, based on the former Spanish Royal Collection, and the single best collection of Spanish art. Founded in 1819, it also contains important collections of other types of works. El Prado is one of the most visited sites in the world, and it is considered one of the greatest art museums in the world. The numerous works by Francisco Goya, the single most extensively represented artist, as well as by Hieronymus Boasch, El Greco, Peter Paul Rubens, Titian, and Diego Velazquez, are some of the highlights of the collection . . . ]

[The collection currently comprises around 8,200 drawings, 7,600 paintings, 4,800 prints, and 1,000 sculptures, in addition to a large number of other works of art and historic documents. As of 2012, the museum displayed about 1,300 works in the main buildings, while around 3,100 works were on temporary loan to various museums and official institutions. The remainder were in storage. The museum received 2.8 million visitors in 2012 (Wikipedia).] 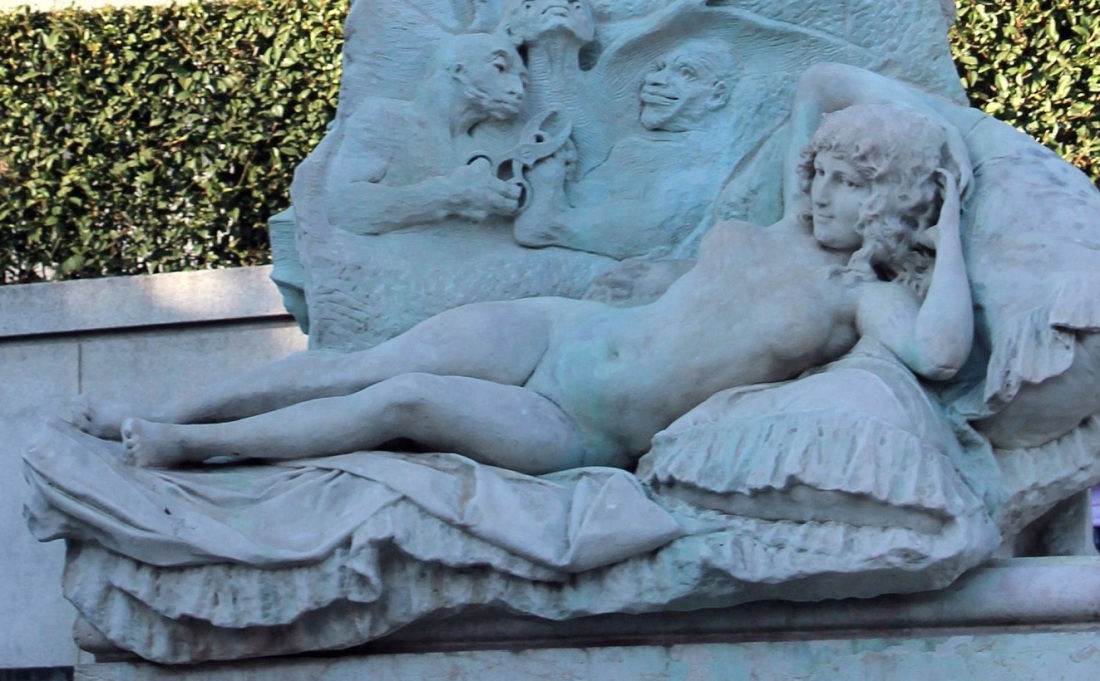 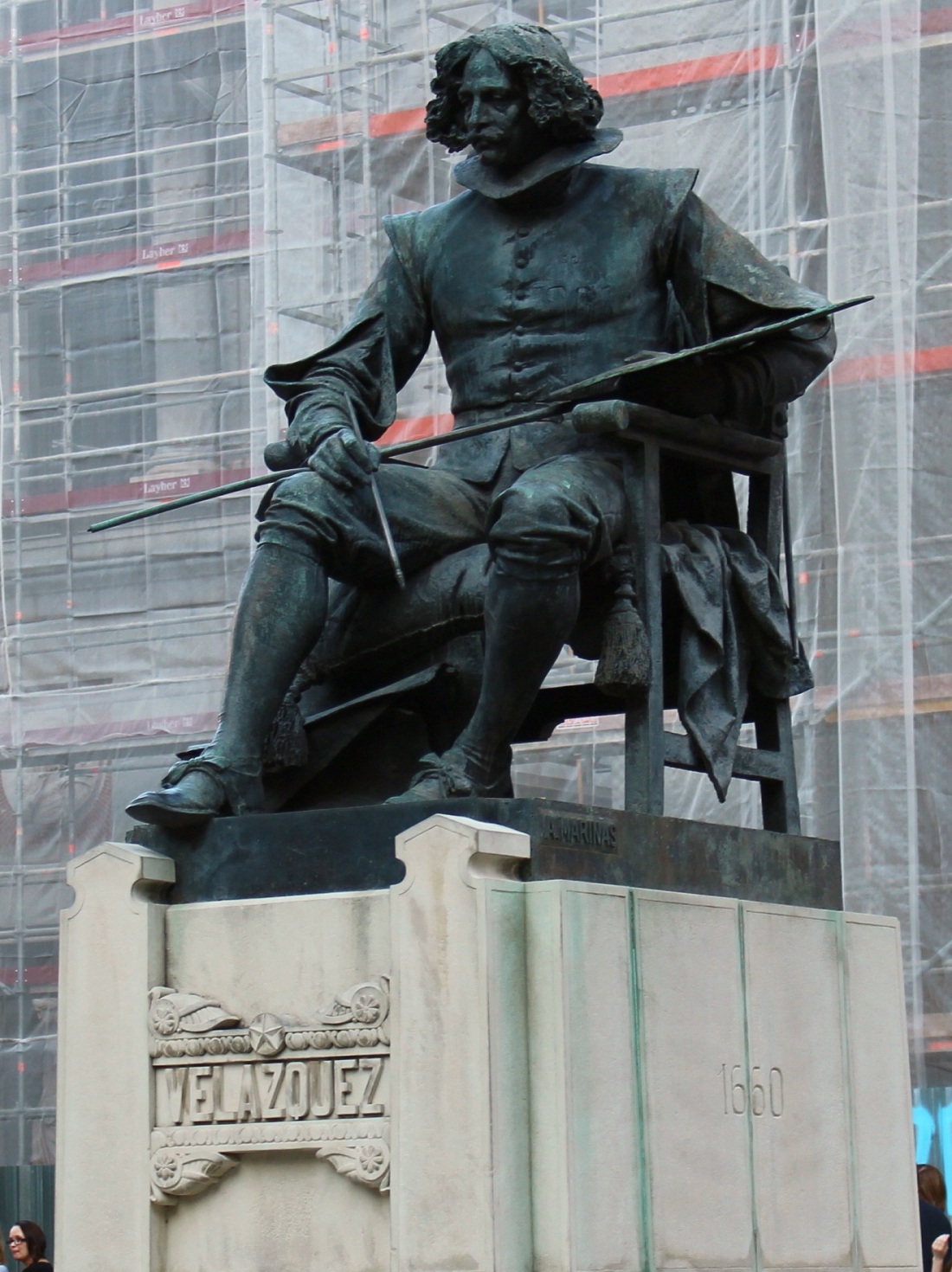 [There is free entry to the museum after 5:00 p.m. (as I recall).  But the line forms early and goes on for blocks.  We were at the back of the line, and it took over a half an hour to get to here.  But we got in.  As you could see from the beginning signage, the Prado is 200 years old this year and is undergoing an extensive makeover . . . ] 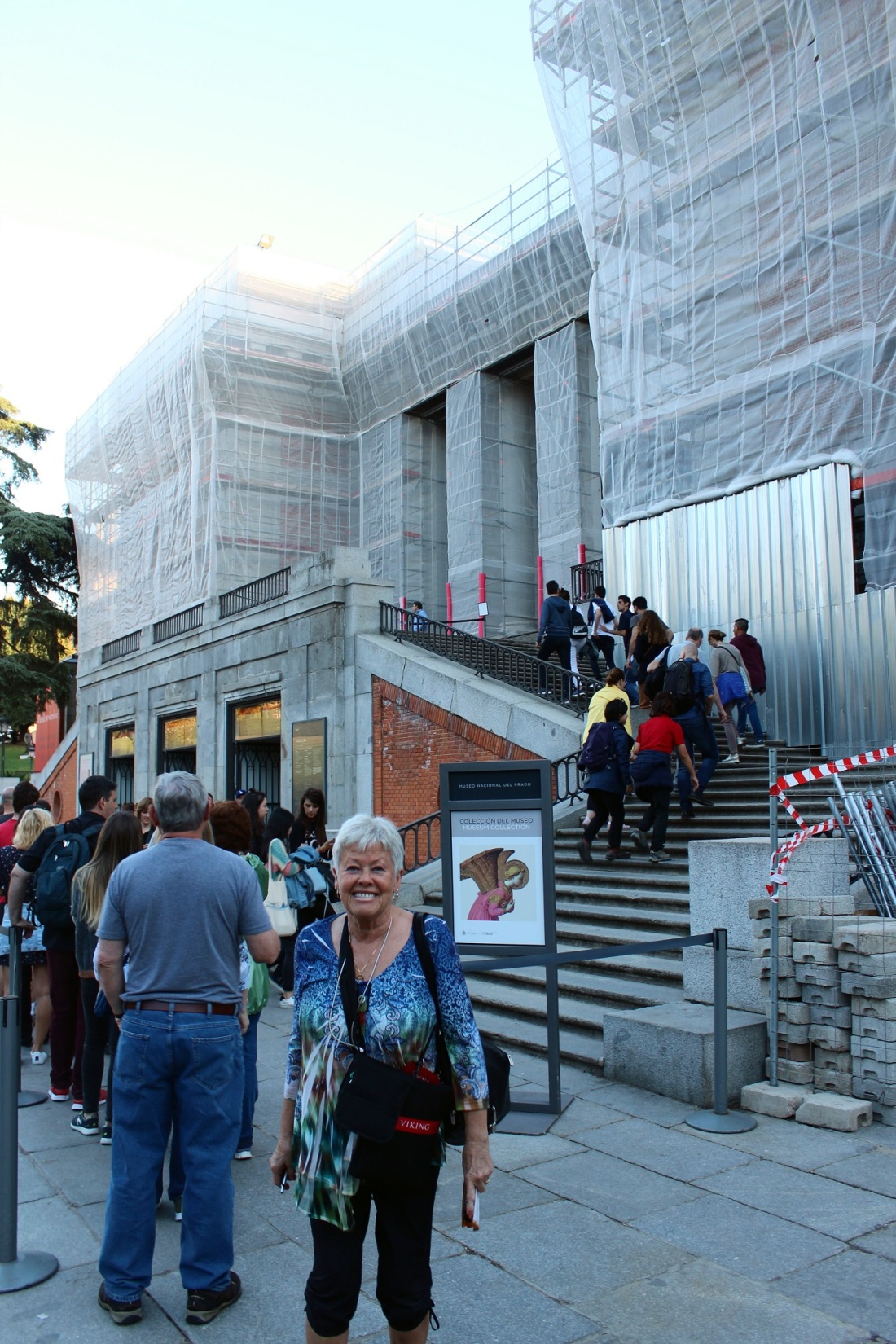 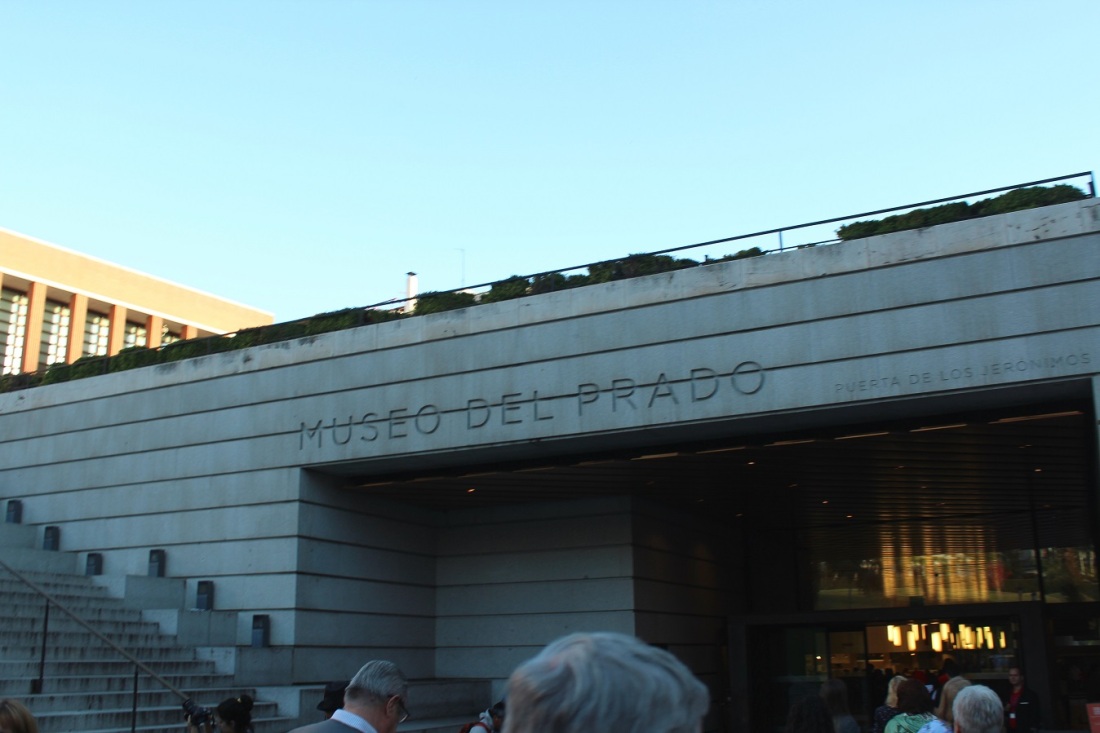 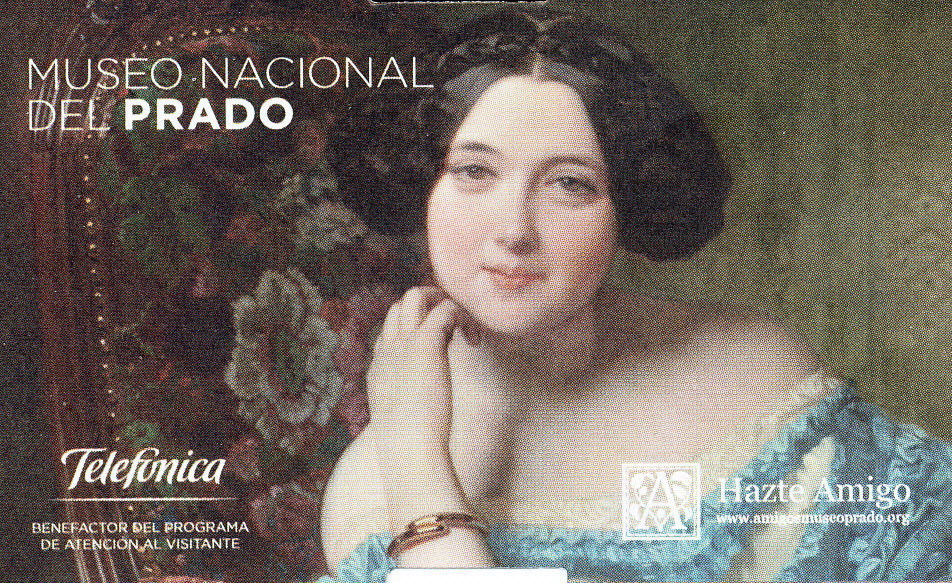 [After I took this shot, I was immediately put upon by several art aficionado museum employees.  My life passed before my very eyes.  Needless to say, I could take no more interior photos . . . ] 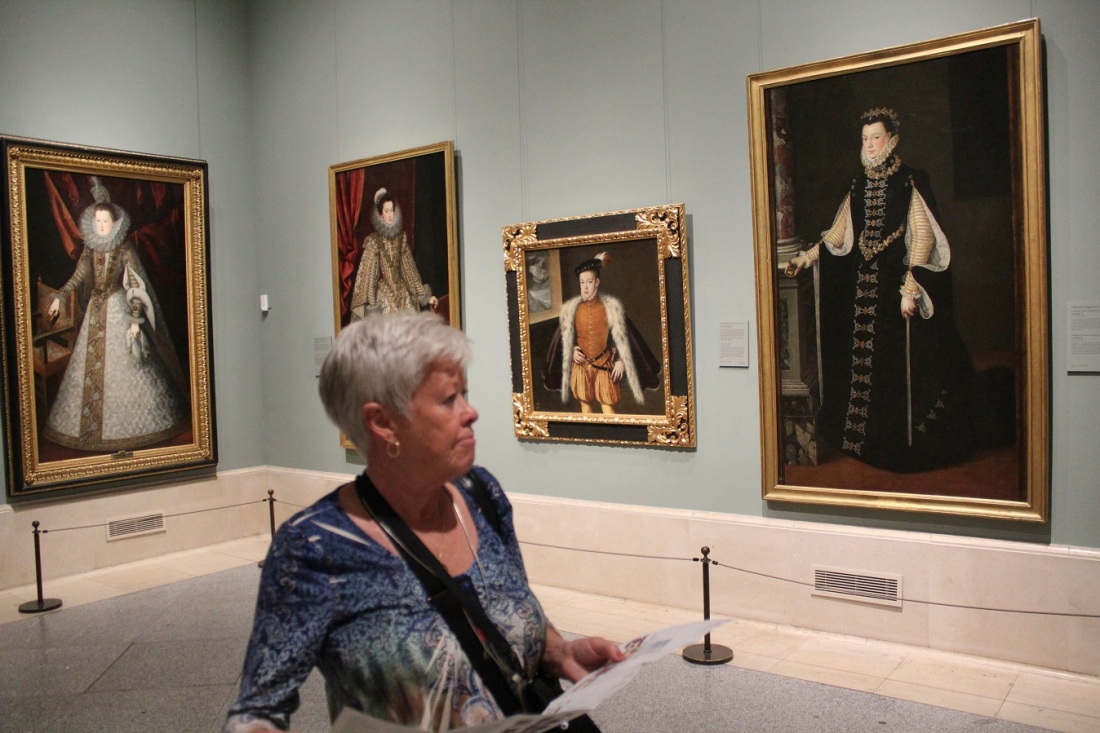 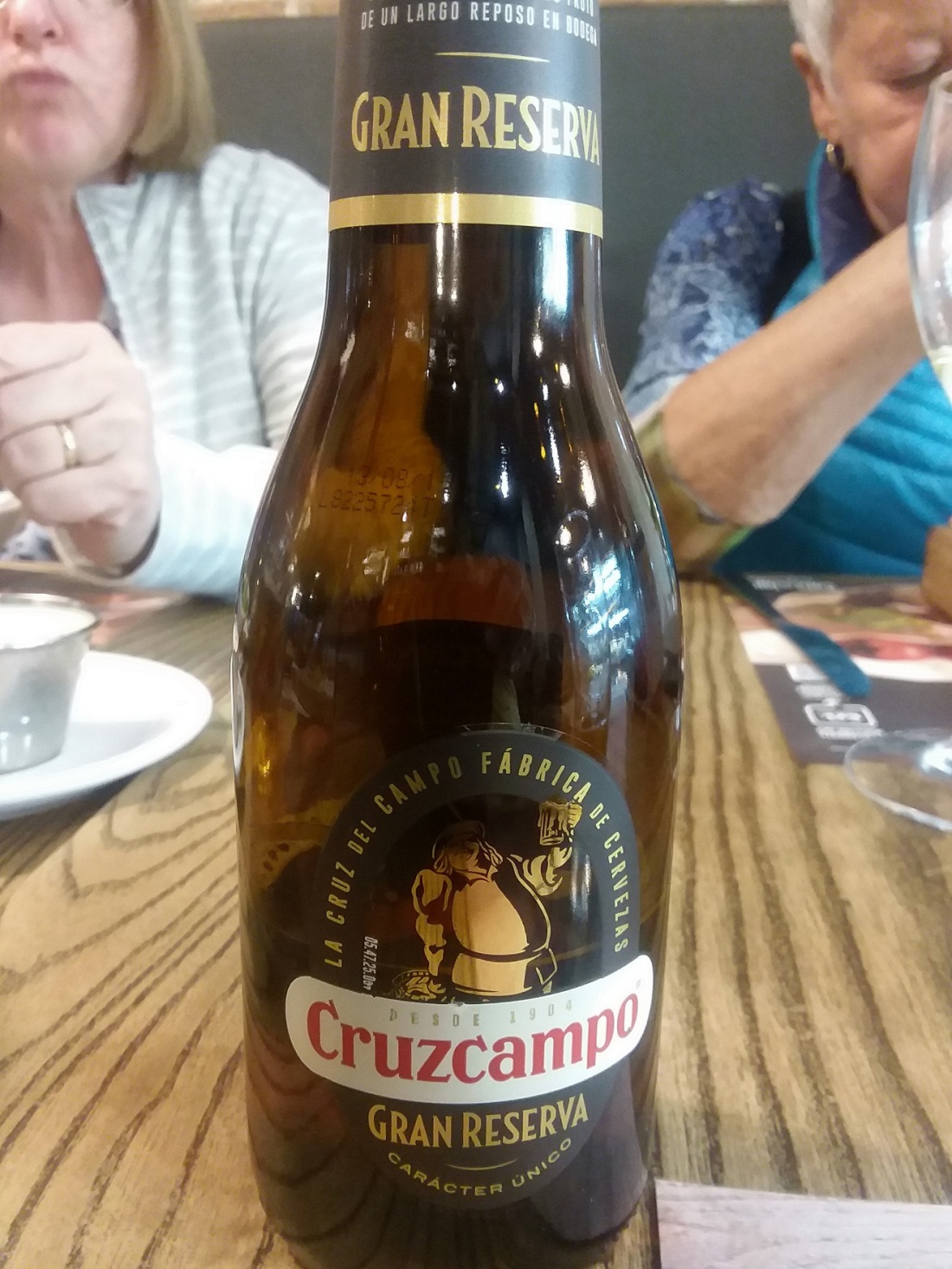 [And I found these deli sandwiches I’m going to dream about again tonight . . . ] 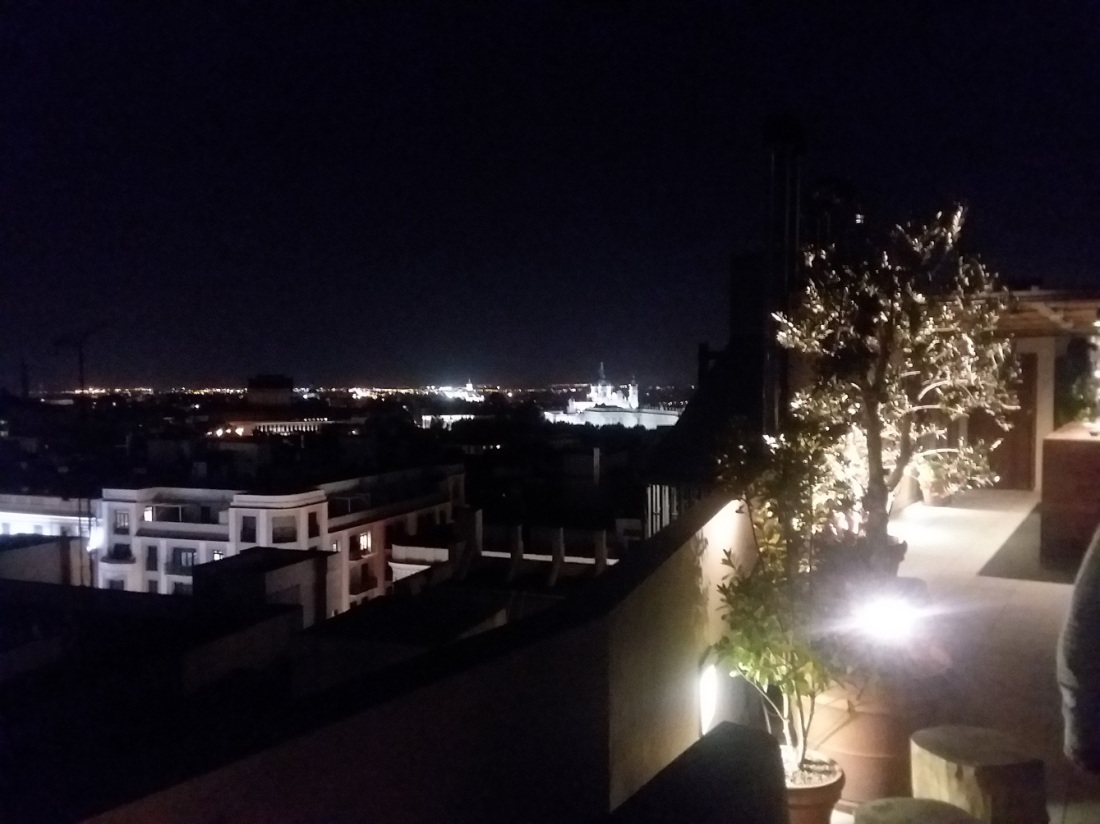 [Looking down on the street from whence we just came.  On the morrow we will be on the move again . . . ] 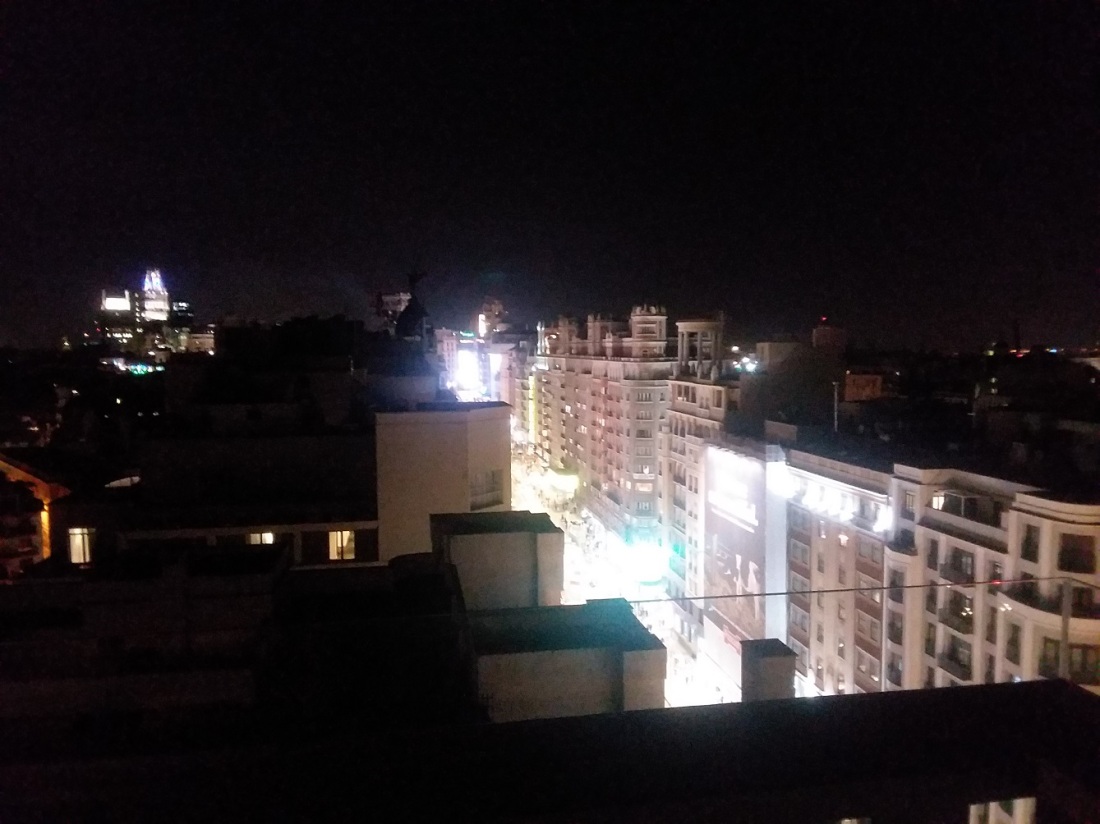 Up Next:  More Spain