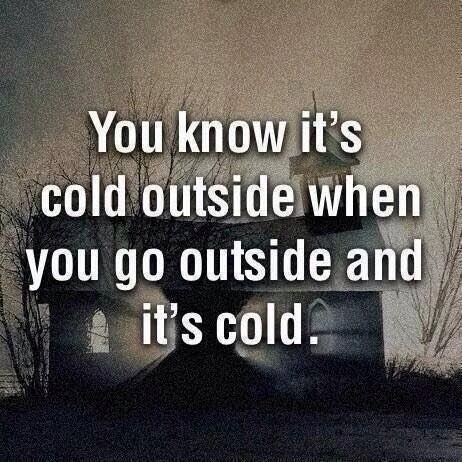 [As you can see below, this year’s team was very young.  Freshmen and sophomores played major roles.  We knew they’d be talented, but the youth undoubtedly led to a unique season . . . ]

[Our Cards were hosting the Willmar Cardinals in the section semifinals . . . ]

[Refs’ and captains’ pre-game meeting.  The subject of said meeting can only be disclosed on a need-to-know basis . . . ] 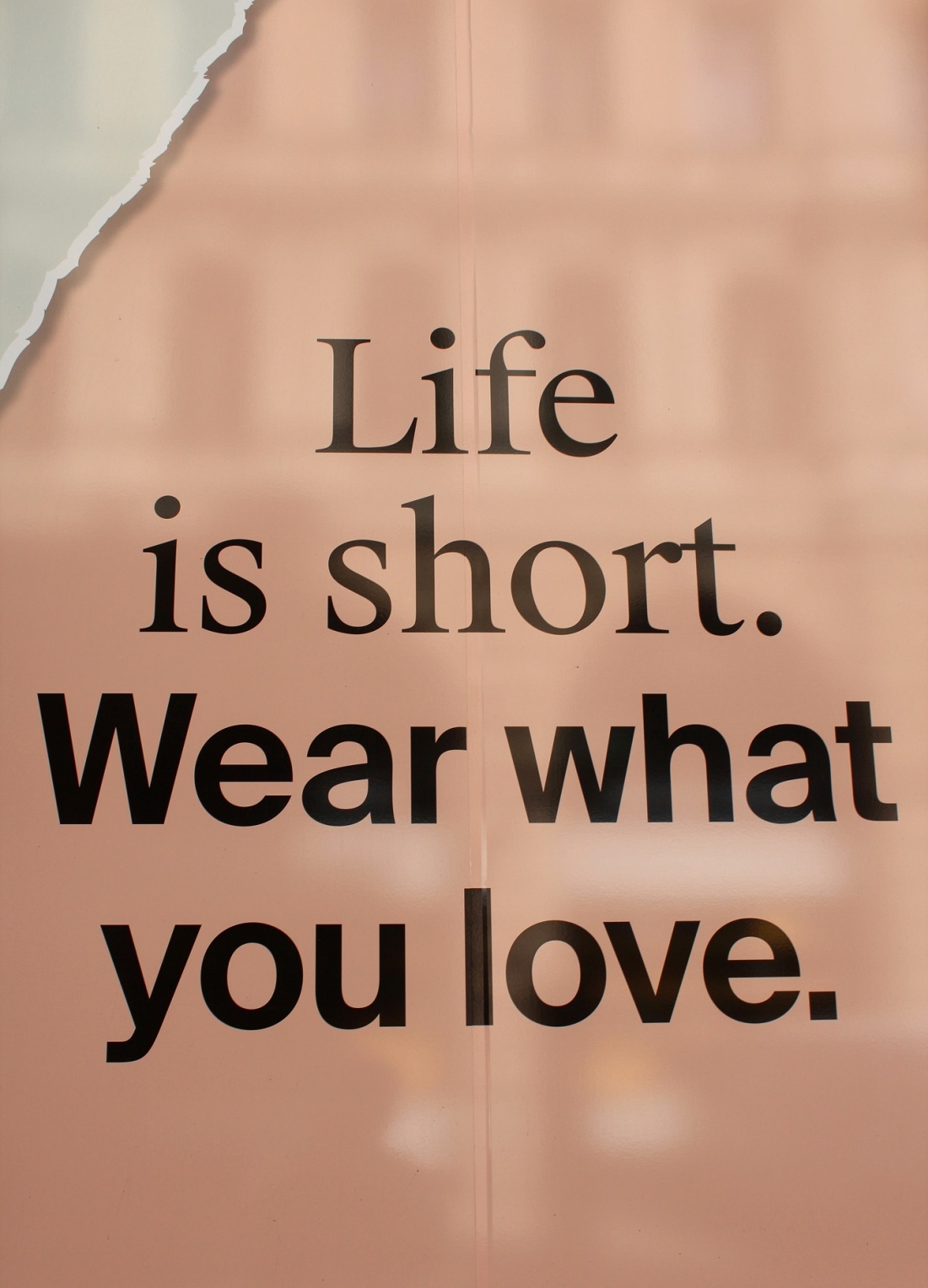 [Our Cardinals won both regular season games from their Cardinals, in one game unleashing 69 shots on goal . . . ] 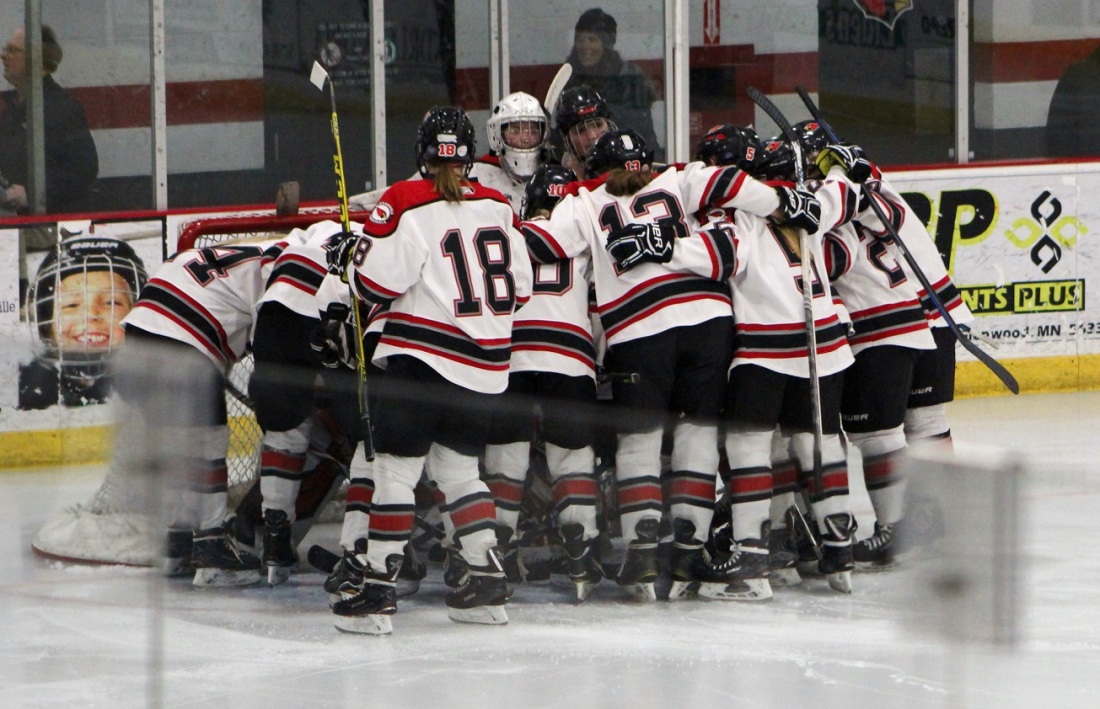 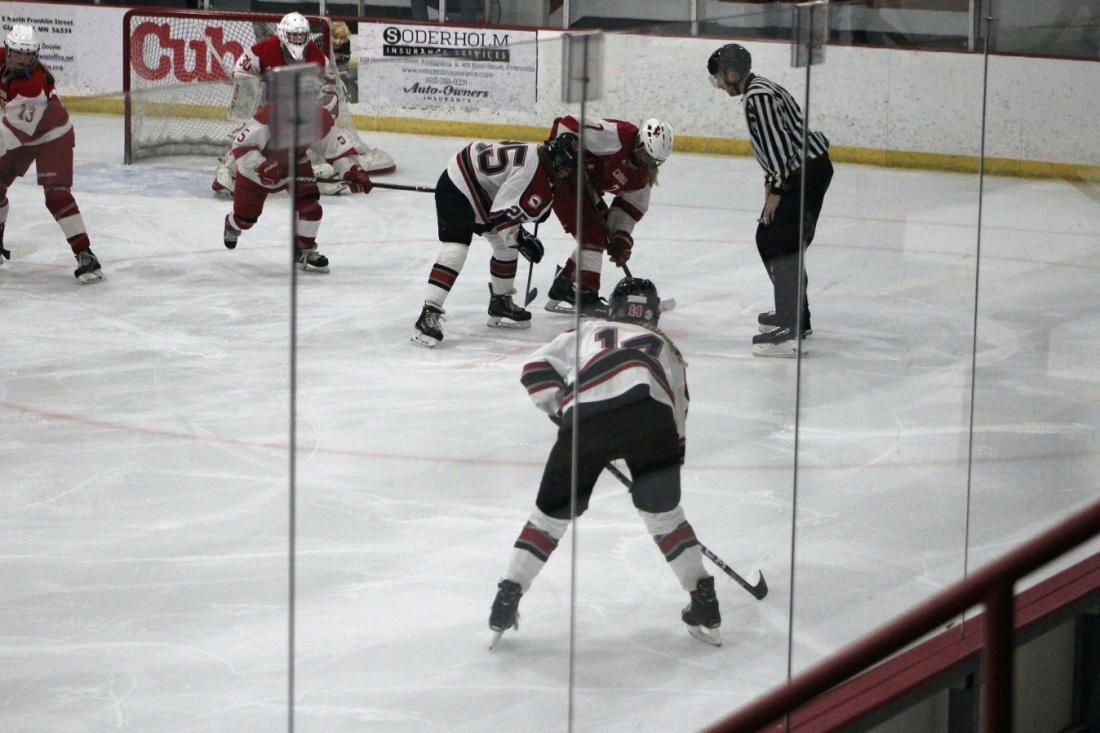 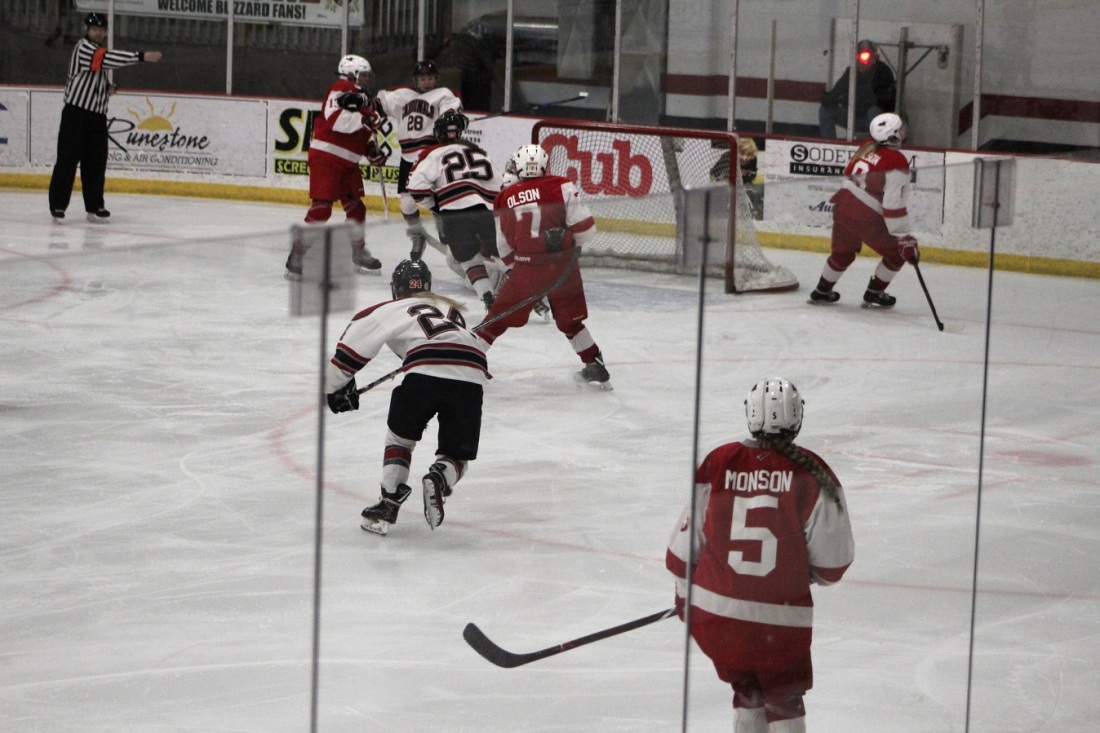 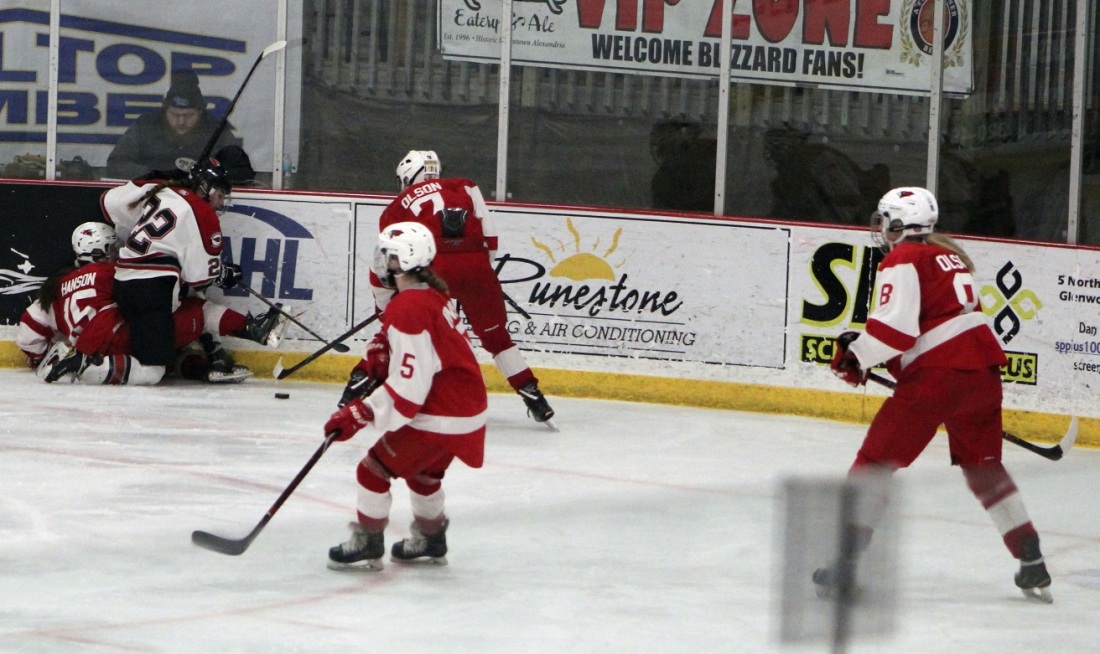 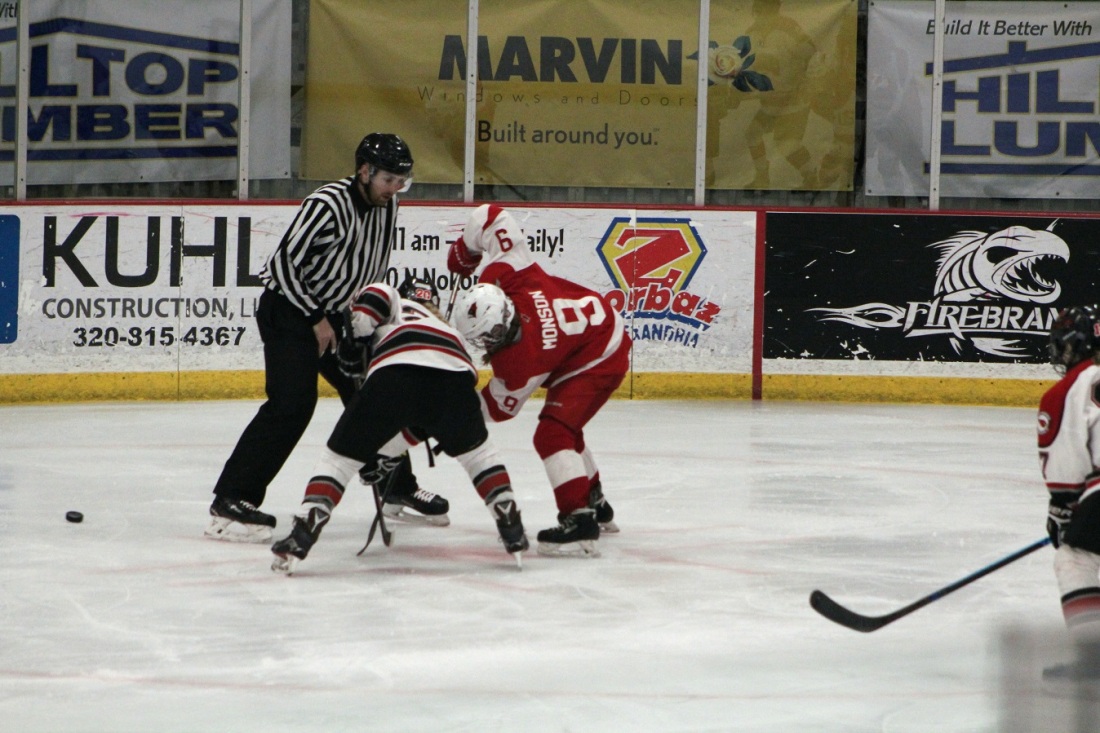 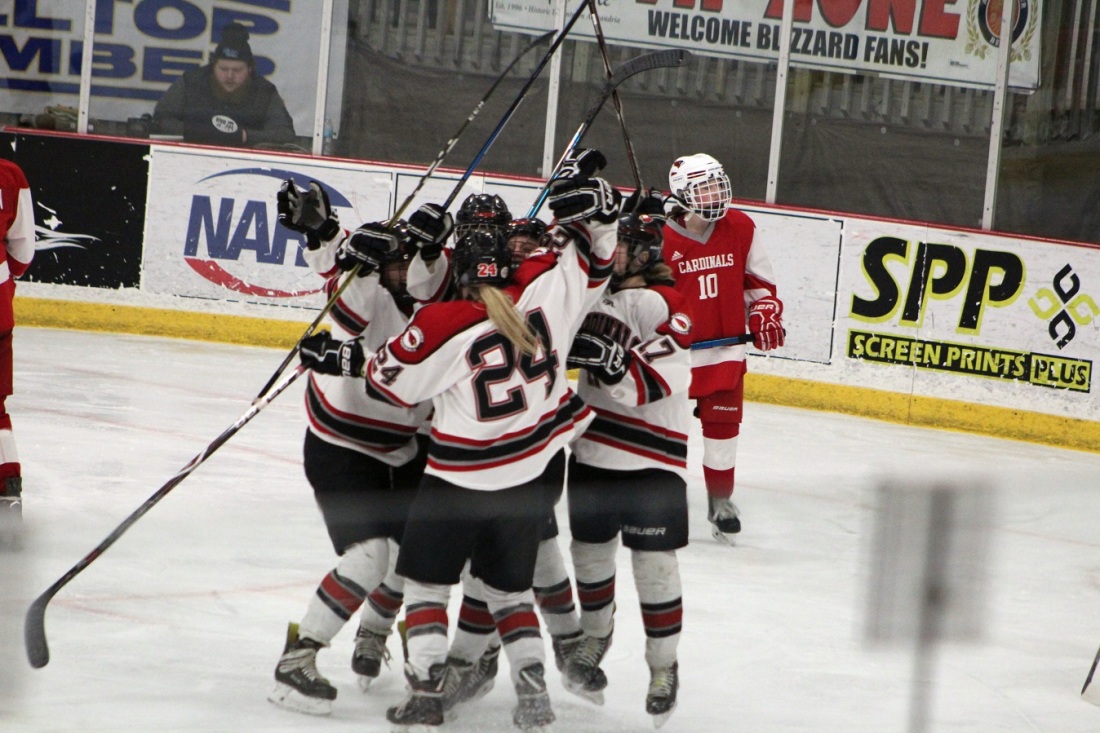 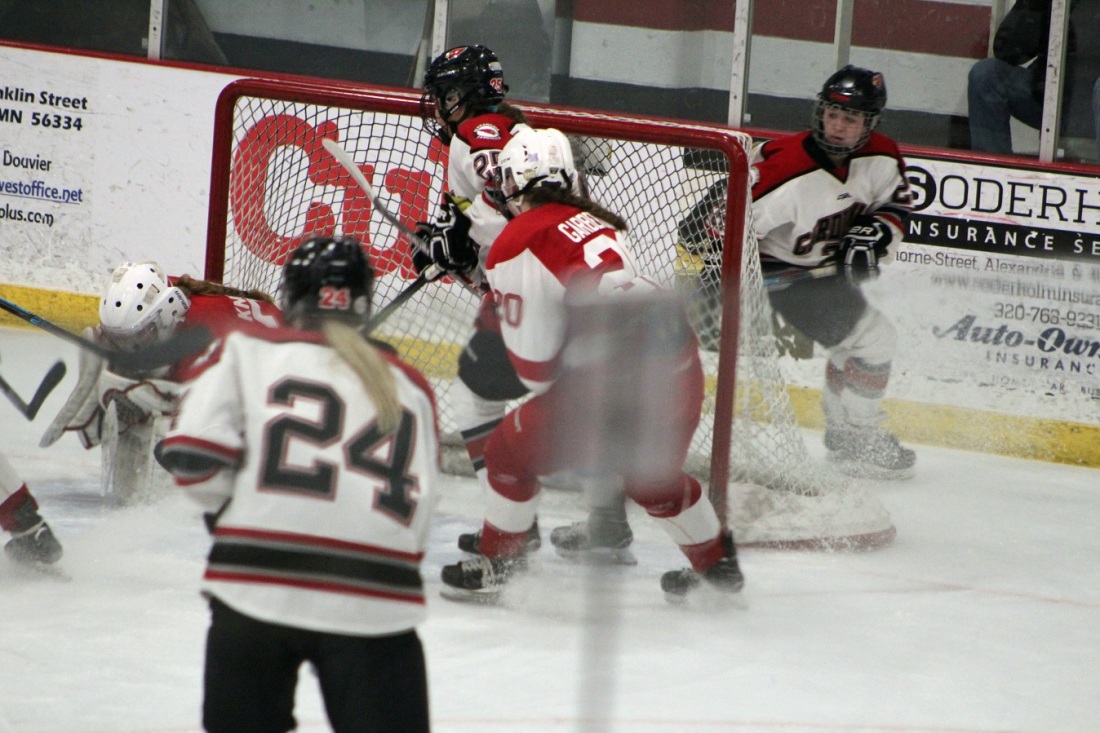 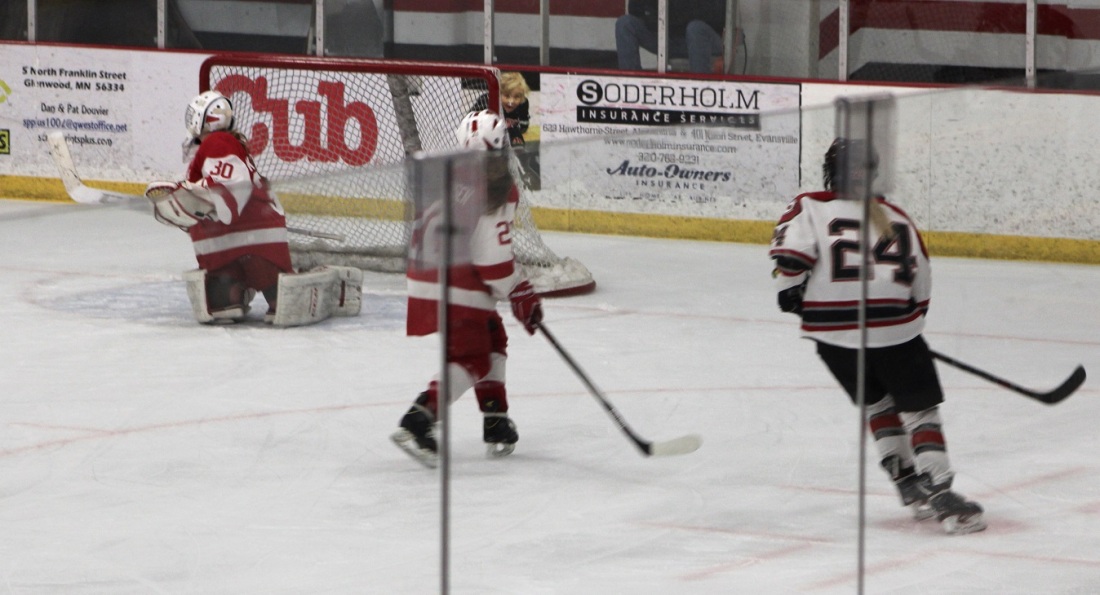 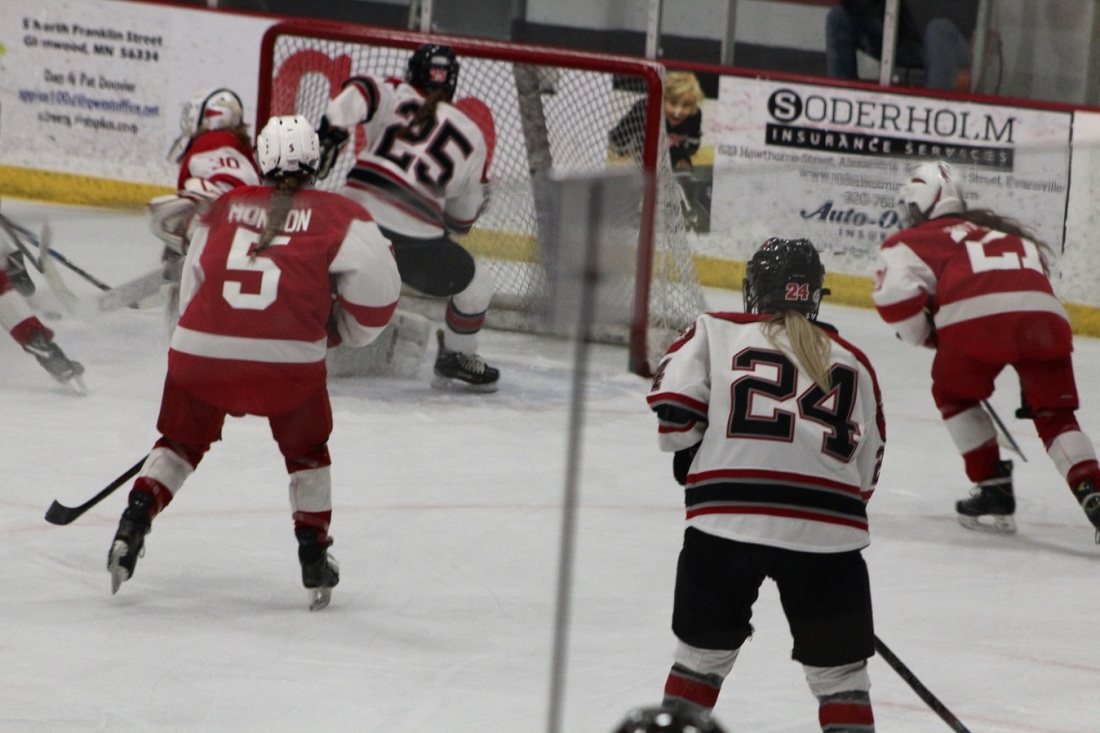 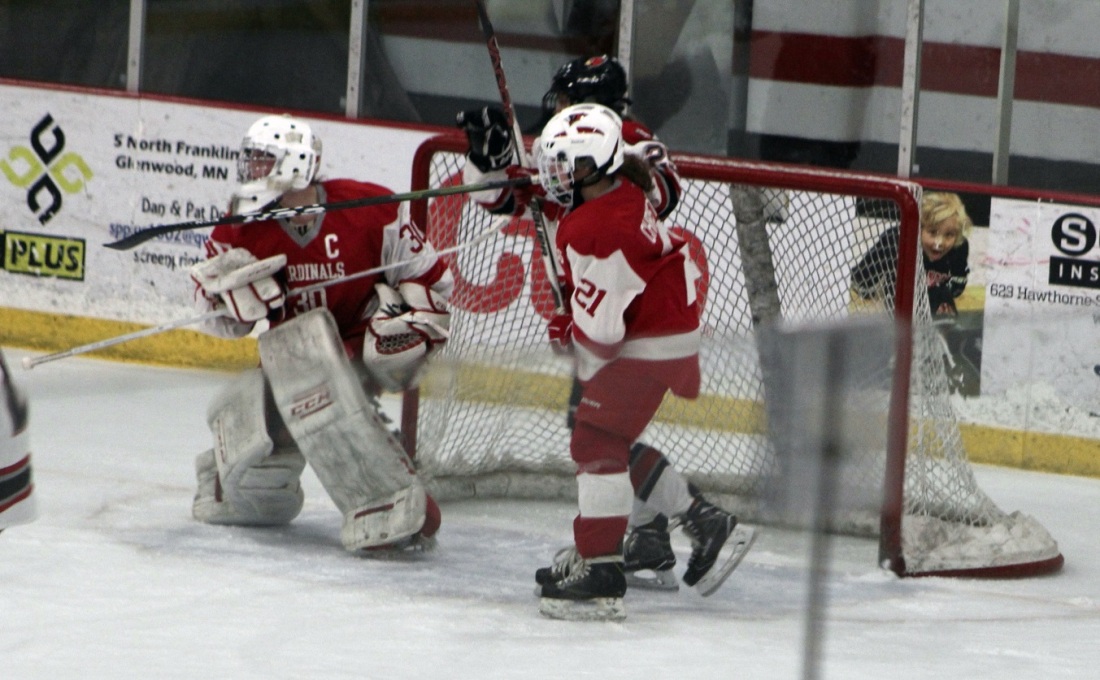 [But then Willmar scored a bit of a sloppy goal with about one minute left in the period.  It obviously gave them hope . . . ] 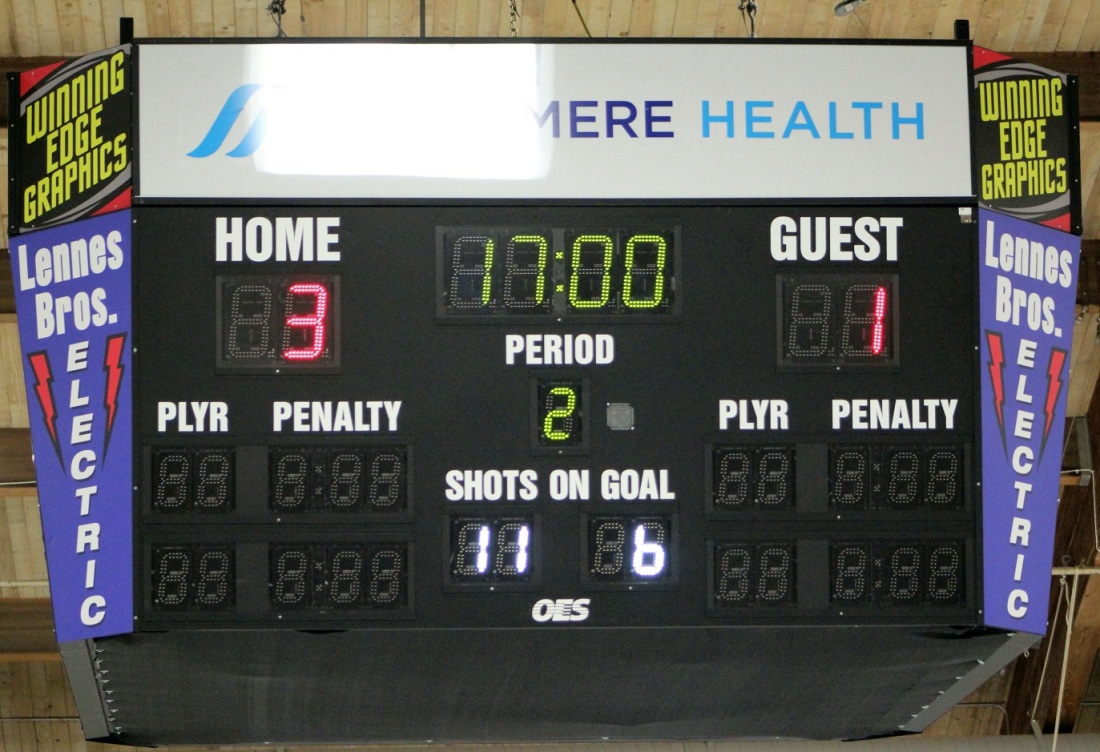 [Then into the 2nd period, Willmar scored two quick and eary power play goals and all of a sudden we had a tie game?] 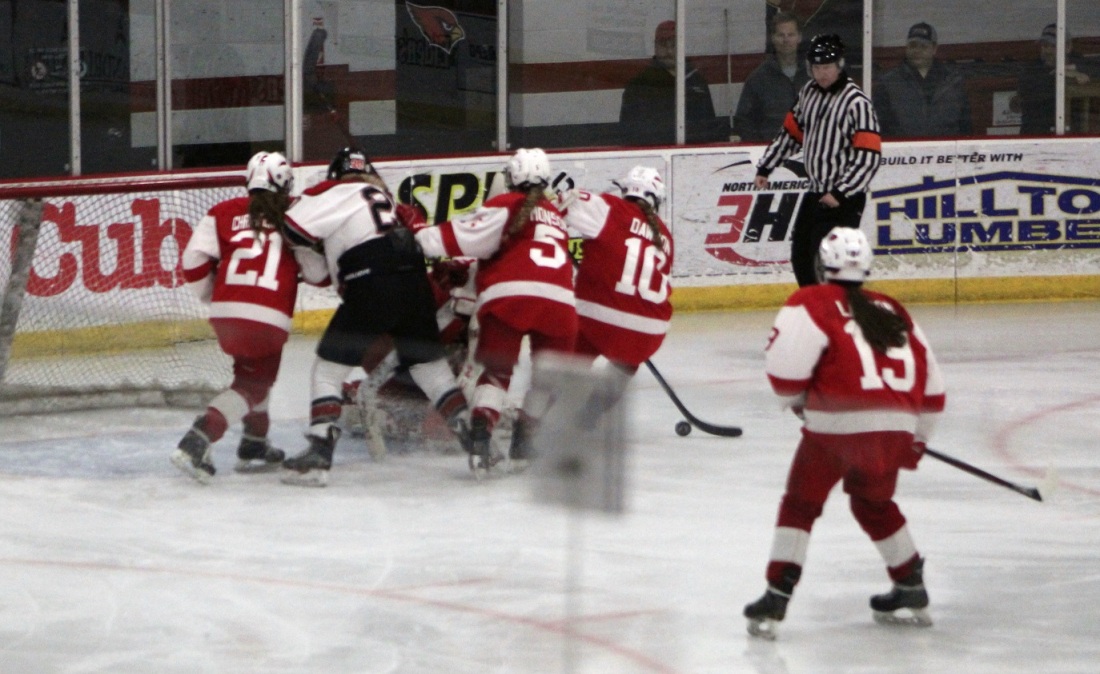 [McKenna then completed her hat trick and we had the lead again . . . ] 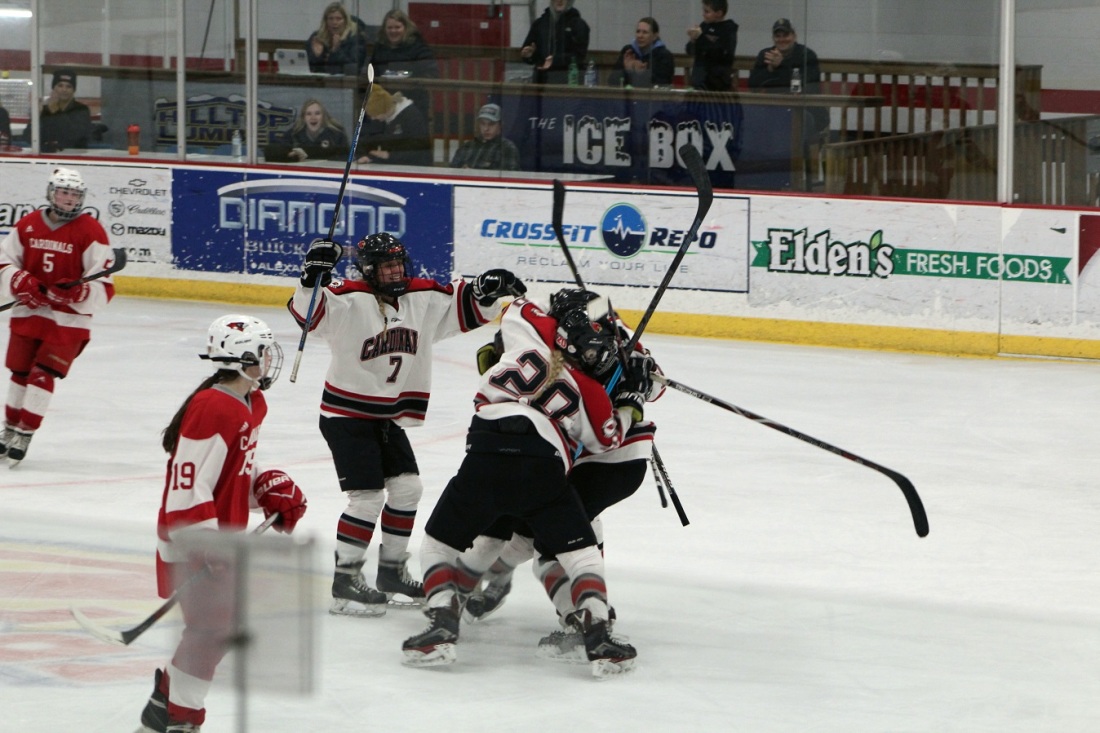 [But then Willmar scored about a minute after Mayson’s goal, and it was a one goal game heading into the final period . . . ] 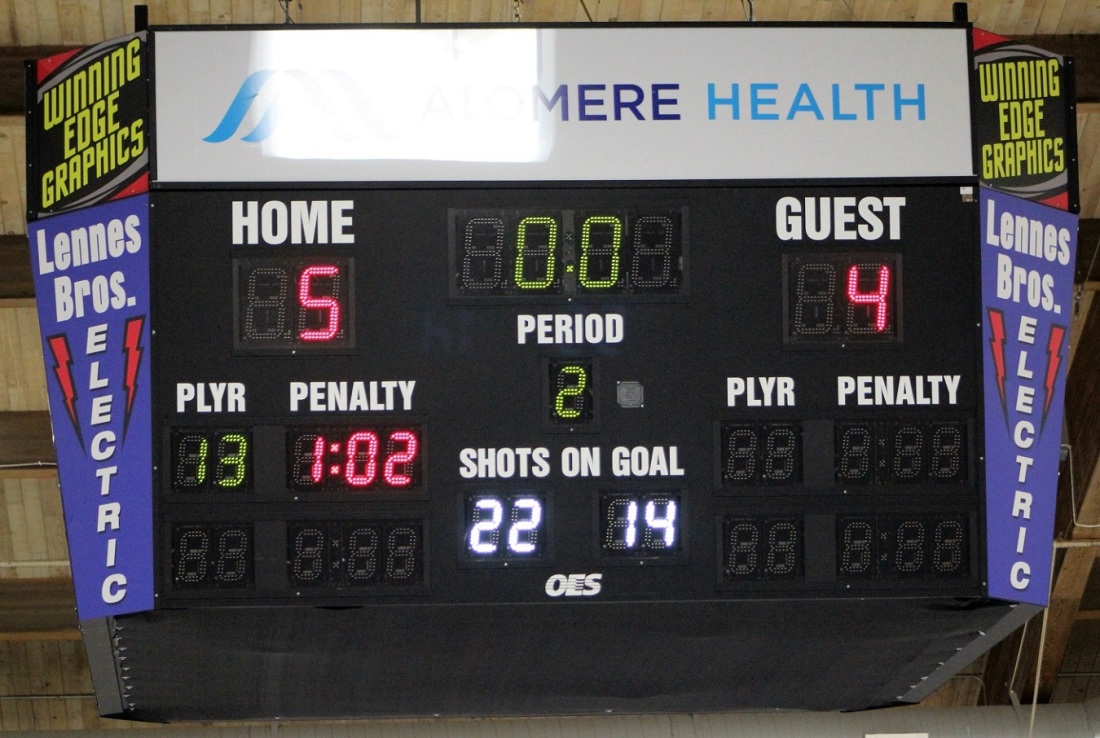 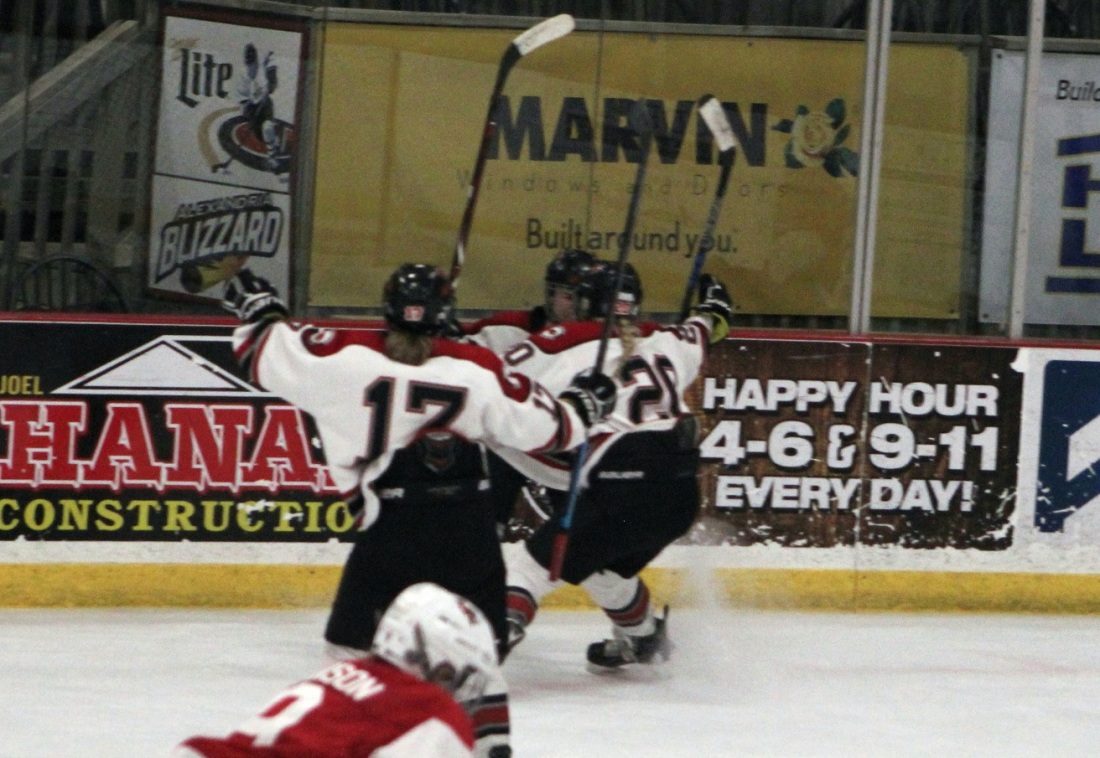 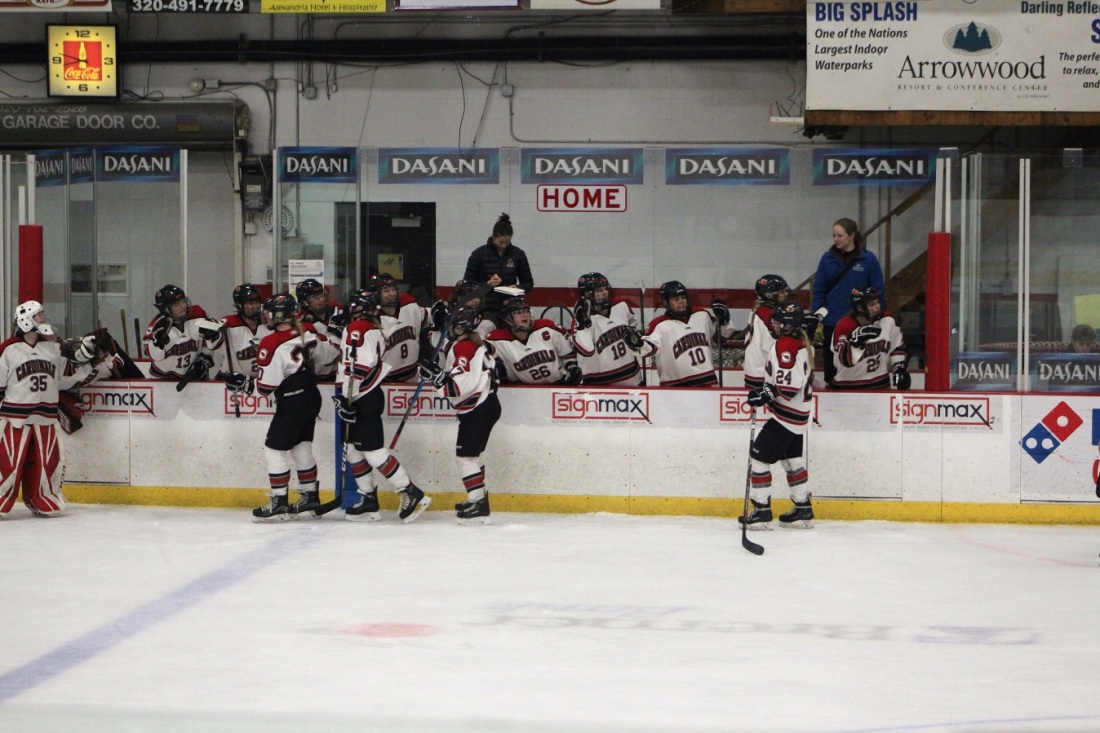 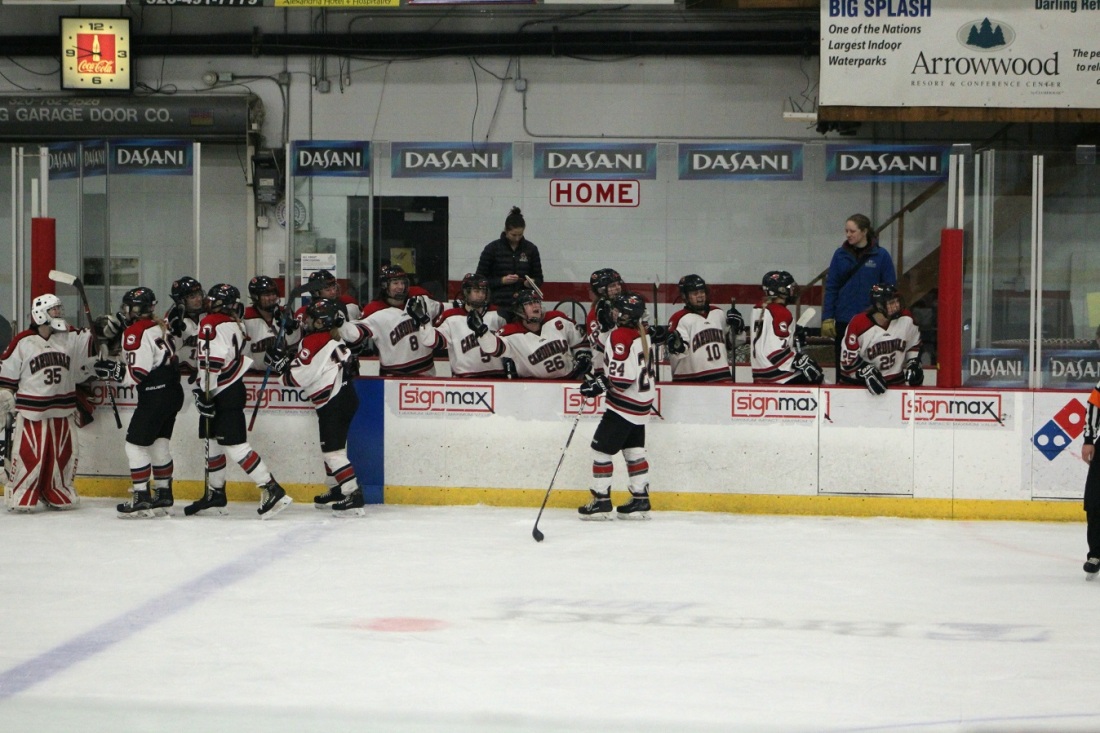 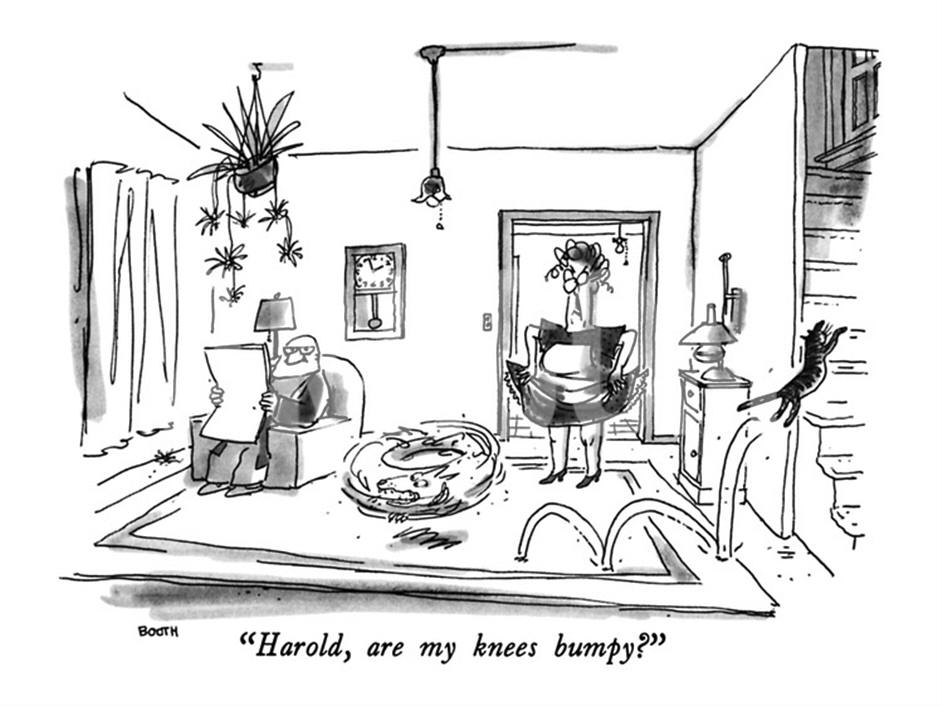 The Cards played Fergus Falls two nights later in Willmar for the section title.  They played the kind of game that marked this “unique” season.  The two teams split during the regular season, and the Otters were the No. 1 seed based on overall record. But I think most likely thought the Cards the favorite (we won and outshot them 42 – 16 in the second game).  But as so often happened during the season, the Cards outshot the Otters again 33 – 16, but lost 3 – 1.  As in the Willmar game, the Otters had back-to-back power play goals the 2nd period, and despite the Cards 16 – 4 shot advantage in the 3rd, neither team scored again.  That ended a 7-year Cardinal run as section champs, and it may be the first time the Otters have won it.  So congratulations to them.

Particularly early in the season, the Cards were losing games where they had big shot advantages.  But even in those lost games, the young talent was displayed and it would only be a matter of time before it clicked.  The team won 8 of its last 9 until the championship game and finished with a 13 – 12 regular season record and 2 – 1 in the sections.  What jumps out at the end is that we outscored our opponents 100 – 66 and outshot them 1001 to 574!  Wow!  That would seem to indicate a team with a really good record?  But what anomalies:  We outshot Willmar 69 – 12 in our 1st game against them, but only won 2 – 1; we outshot Mound Westonka (a top ten team) 32 – 12, yet lost 6 – 0 (???); we outshot St. Cloud in the 1st game 35 – 13, yet lost 3 – 1.  Well, you get the idea.  Thanks to the team for a fun and interesting season.  I think they’ve given us a preview of what’s ahead, and that we’ll likely be section favorites again next year. 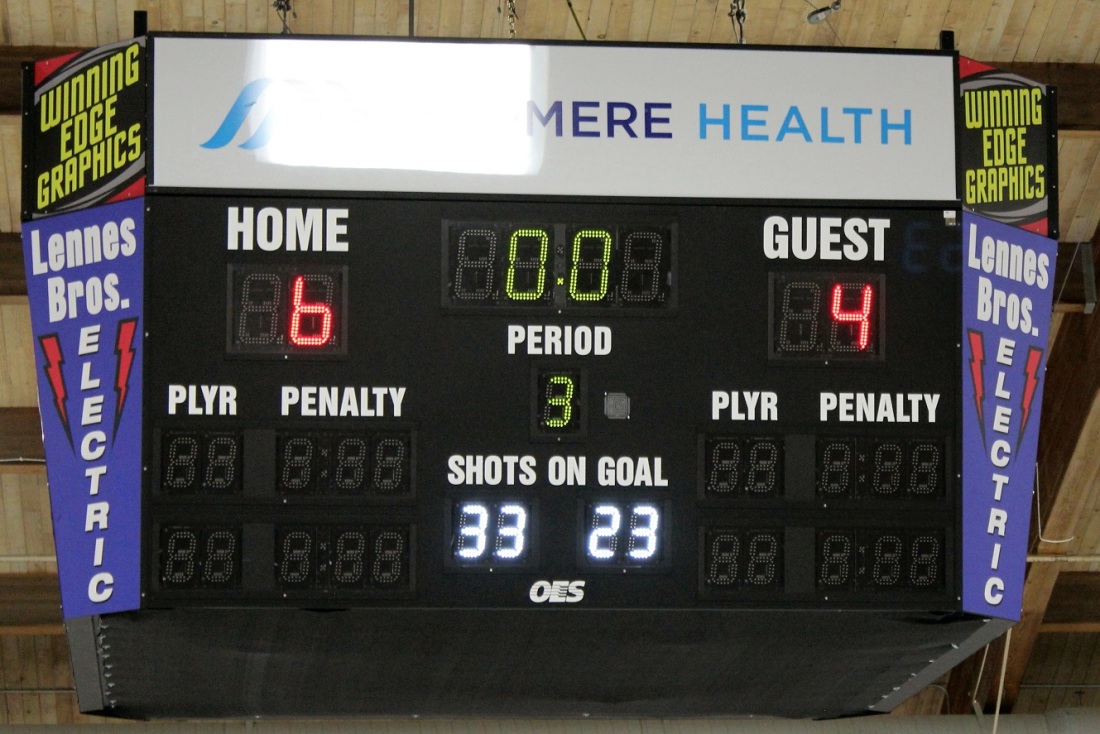 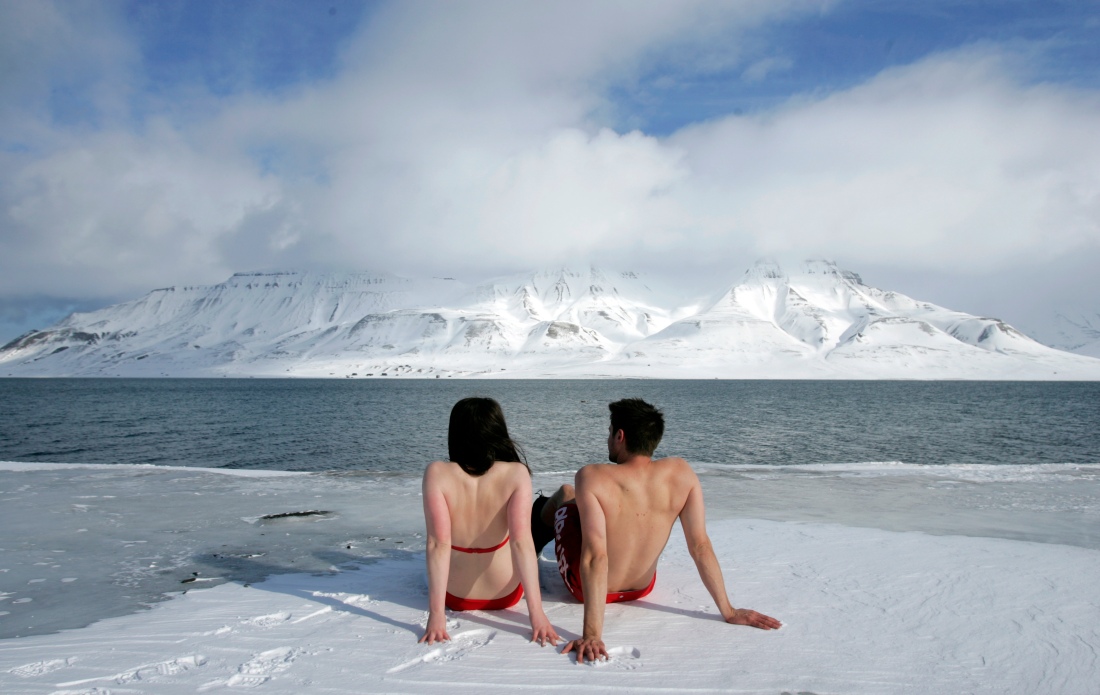 If a man watches three football games in a row, he should be declared legally dead.  ~  Erma Bombeck

Up Next:  Maybe Spain