Well, hello boys & girls!  We’re into that time of year where state tournaments seem to occupy a lot of time for ye ole Cub Reporter.  So, in between shoveling snow off the roof, I’ll try to keep up with the games as best I can.  And then when a senior night is tossed into the mix, I look at those about to play their last games as Cardinals and think . . . how will we ever replace them next year?  Somehow it happens – it’s the process.  A big thanks for the memories to these seniors . . . 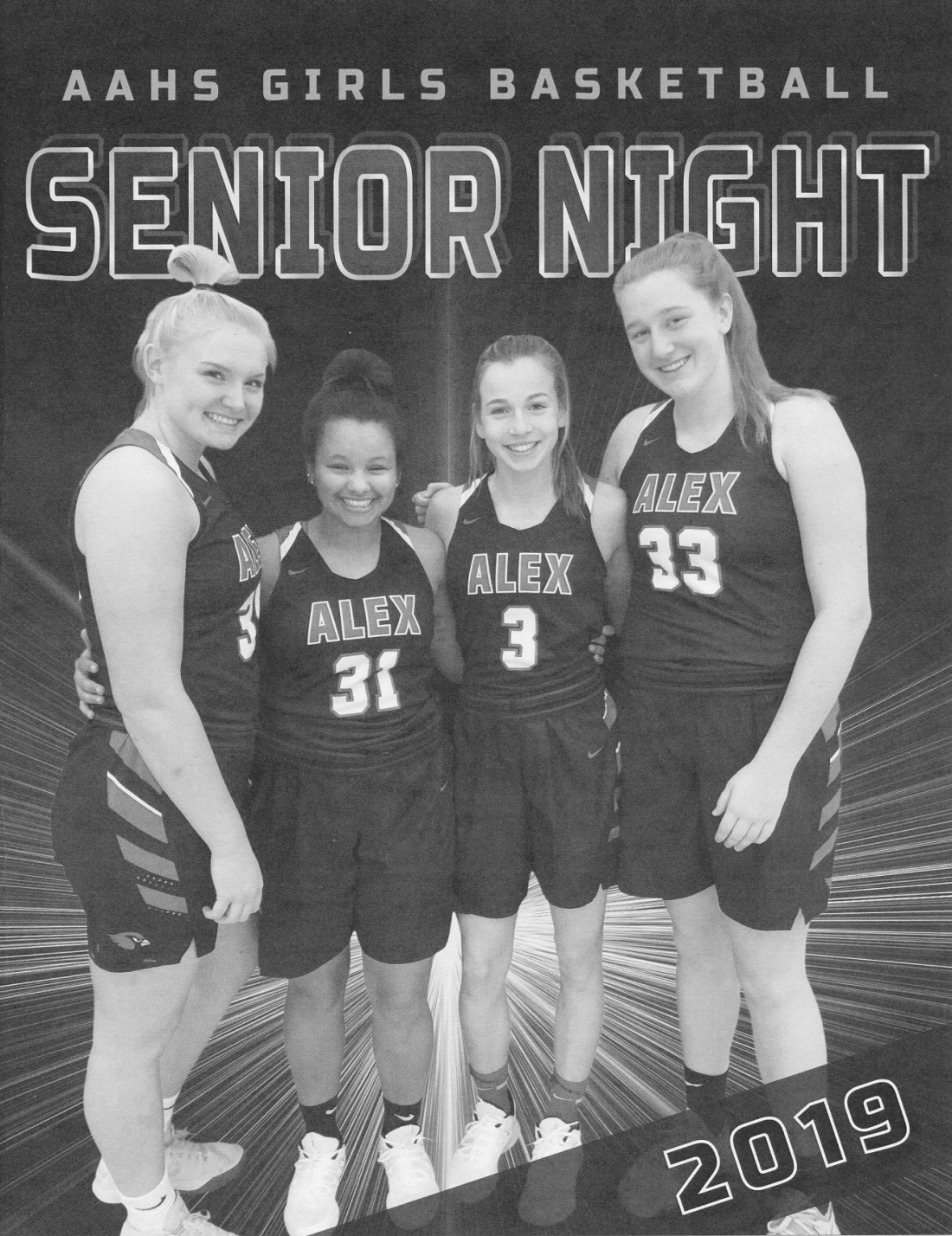 [Yup, the JV struggled through another game.  What was that about having to replace graduating seniors?]

[Card captains meet the captains of the Eagles.  Apollo has been the hot team of late in the conference, with a 10-point win over conference leader Willmar and a 4-point loss at in-the-running Fergus Falls in their last two games . . . ] 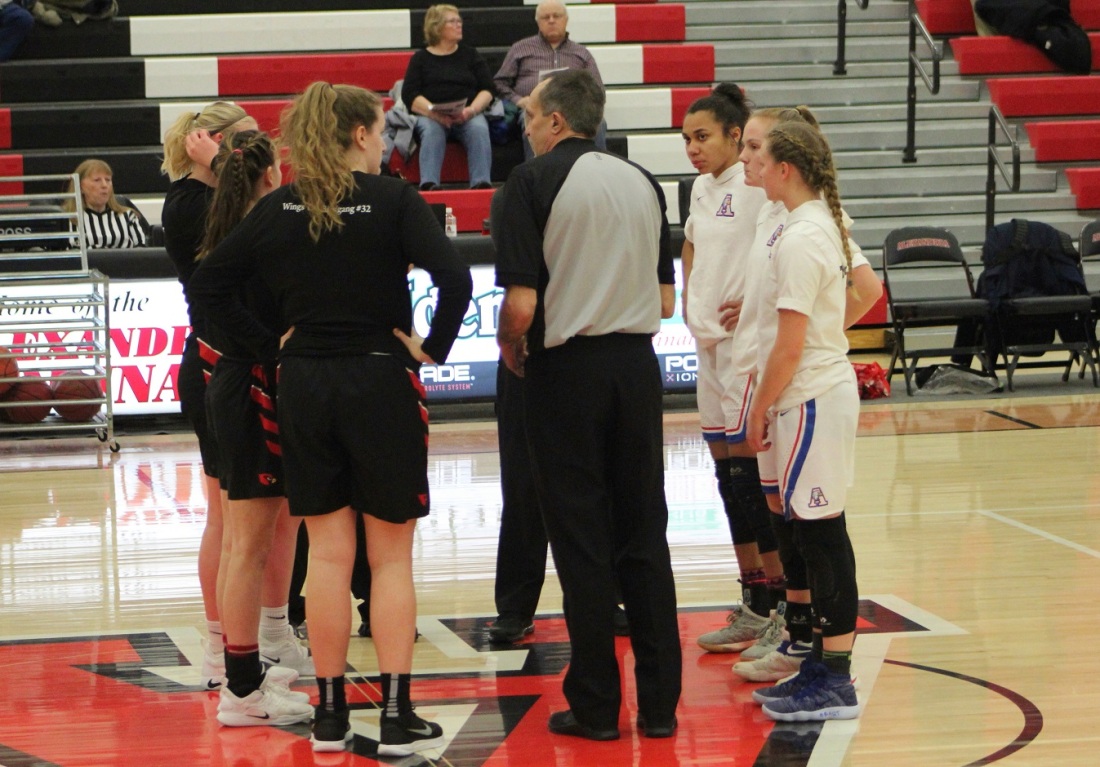 [The moms & dads join the seniors in pre-game recognition.  First up, McKenzie Duwenhoegger (35), senior center, going to the U of M on a shot put/discus track scholarship . . . ] 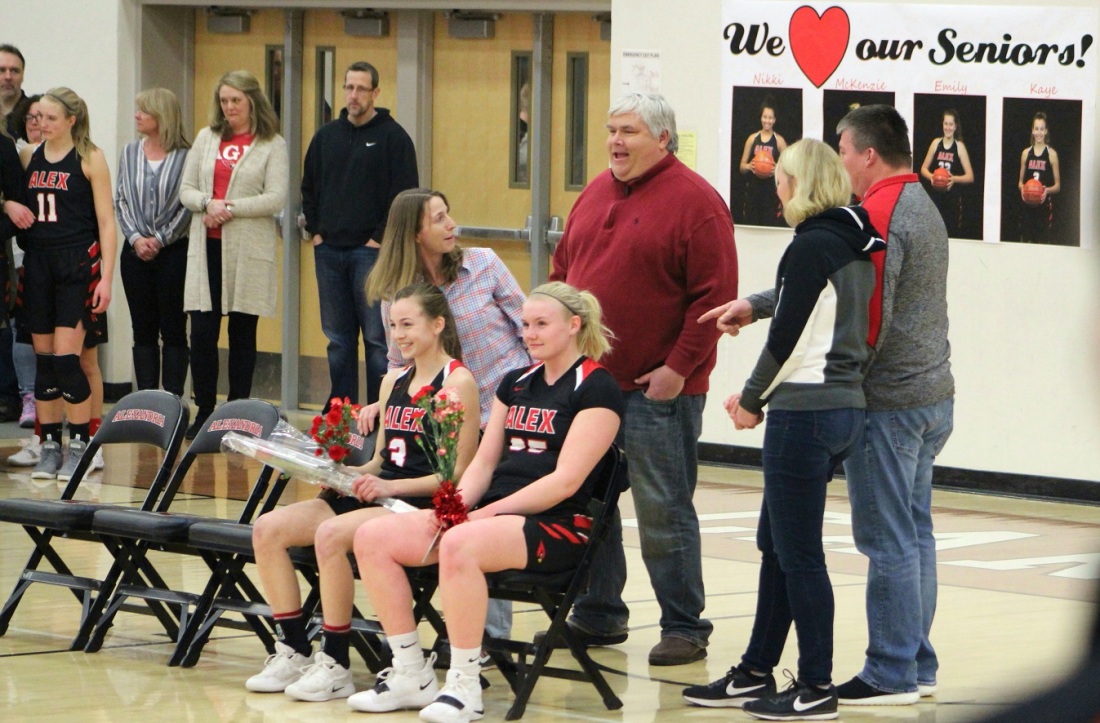 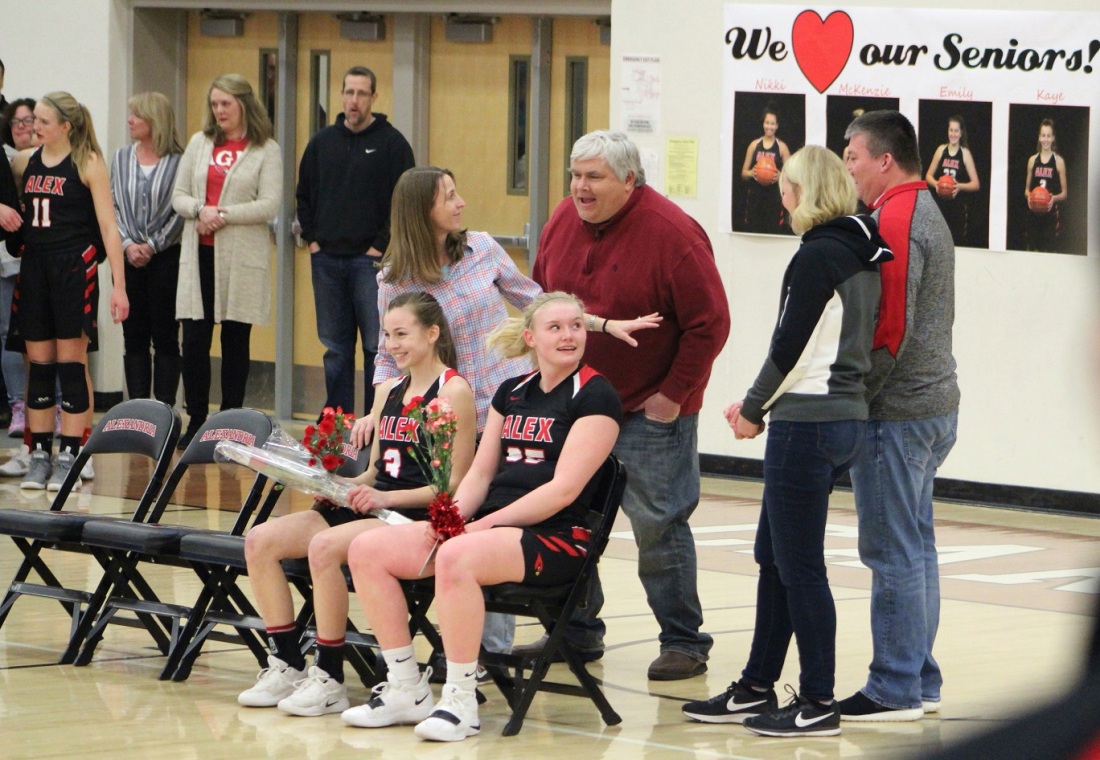 [She will be going on a 9-month missions trip to three countries in different parts of the world.  Something I would highly recommend for everybody . . . ] 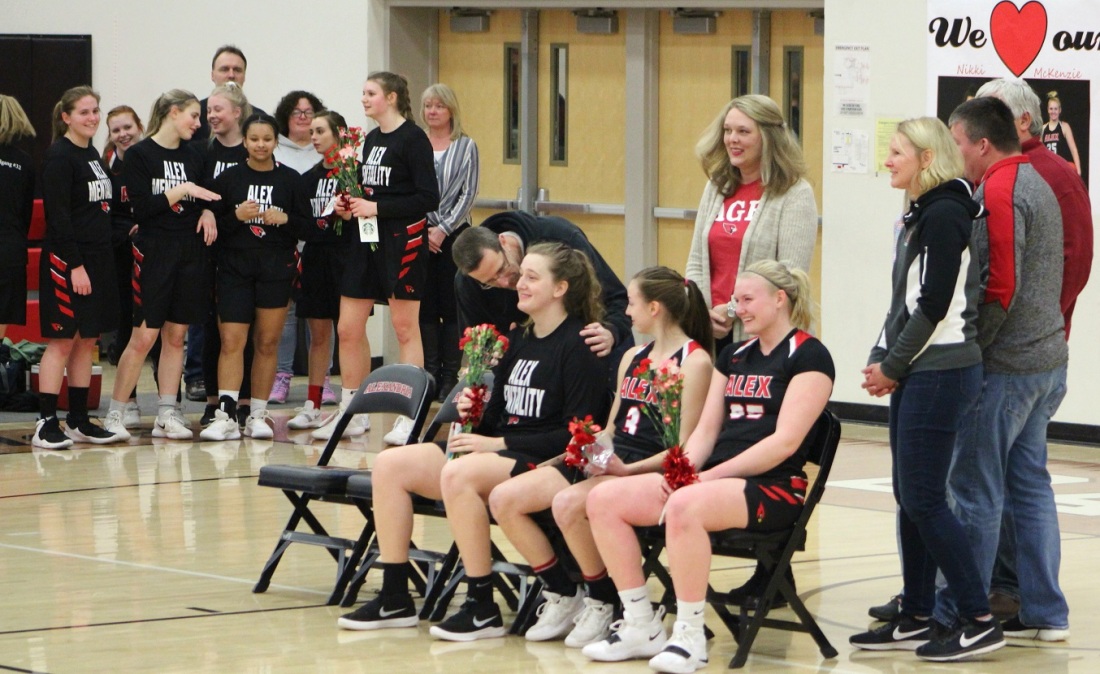 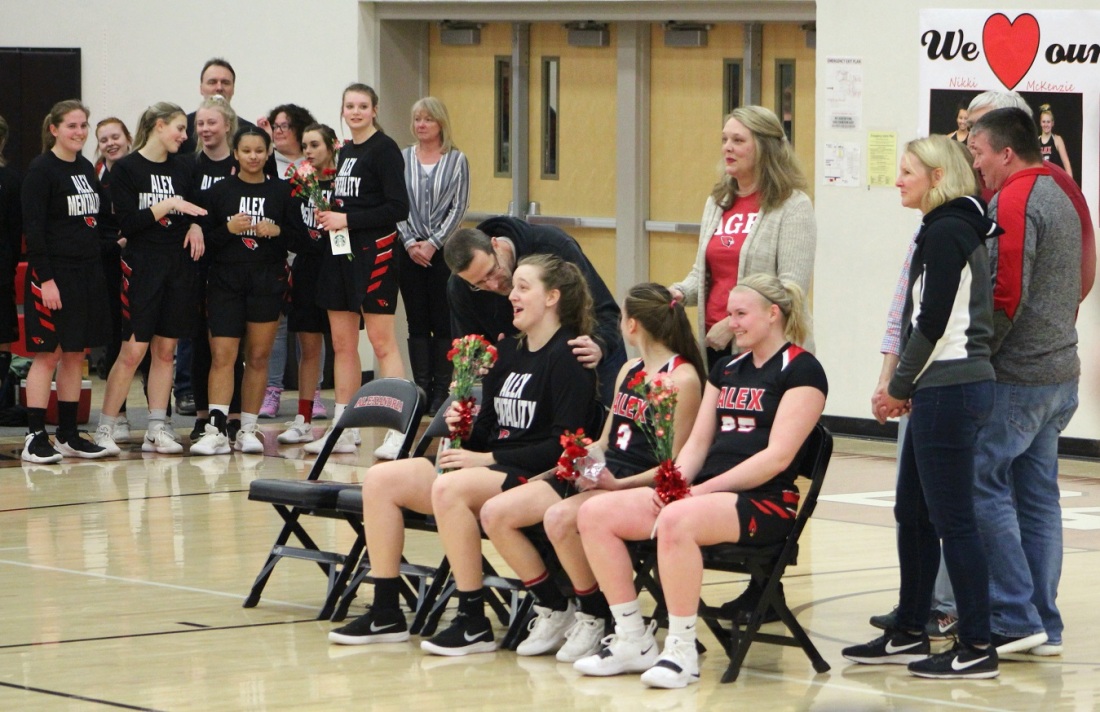 [Nikki Botzet (31), guard, provides enthusiatic depth for the team and is going to pursue nursing at St. Ben’s . . . ] 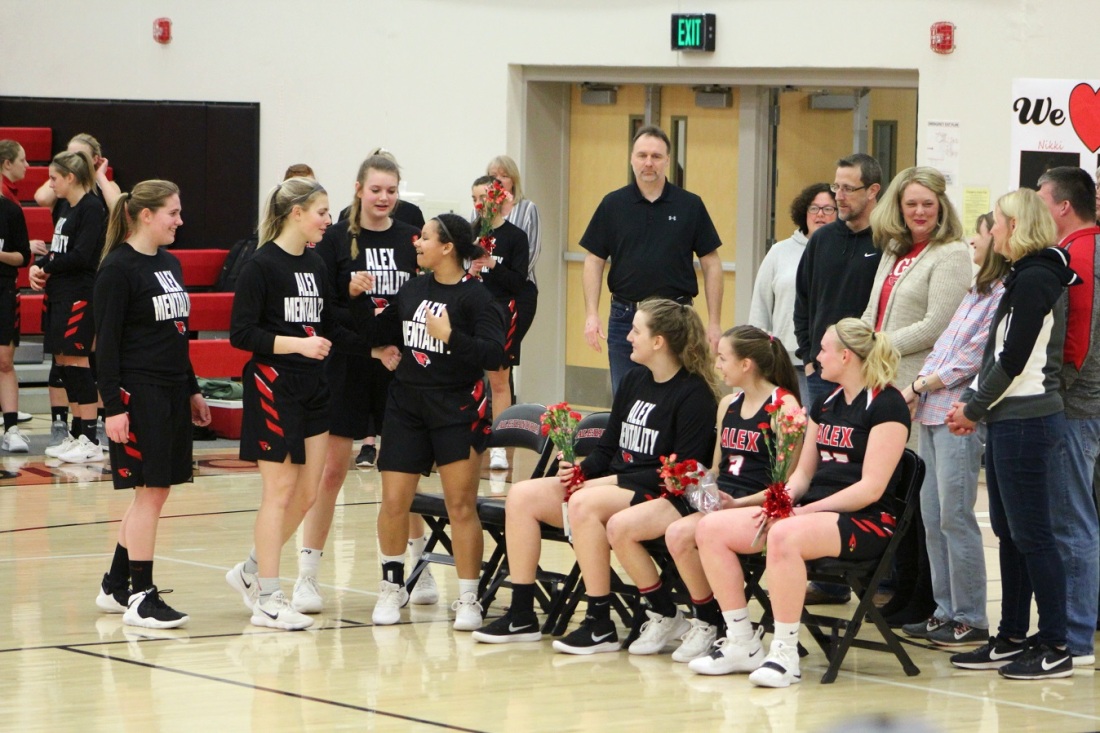 [And team manager Jackie Niska, going to NDSU in education . . . ] 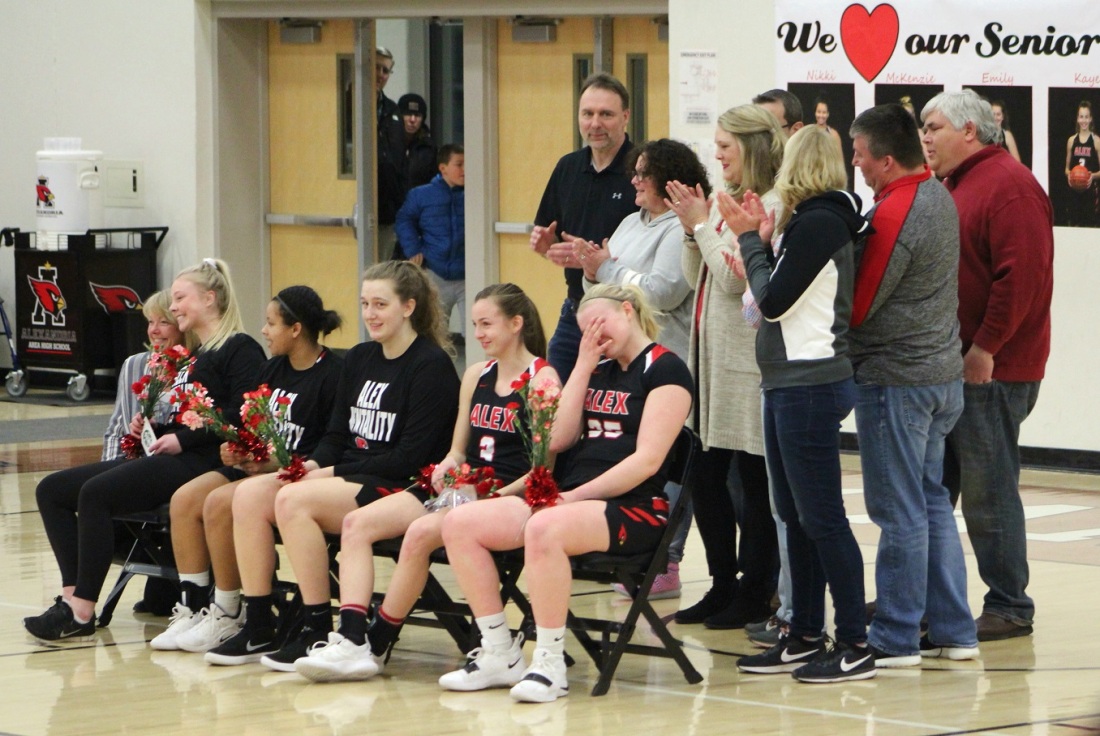 [Kohler gives thanks for their yeoman years of service and a bon voyage . . . ]

[Let’s play basketball!  Mac jumps against arguably the most talented player in the conference, Lariah Washington (3).  Lariah scored 30 and 31 in the Eagles last two games against conference powers, Willmar and Fergus.  She is going to Eastern Illinois on a D1 basketball scholarship . . . ] 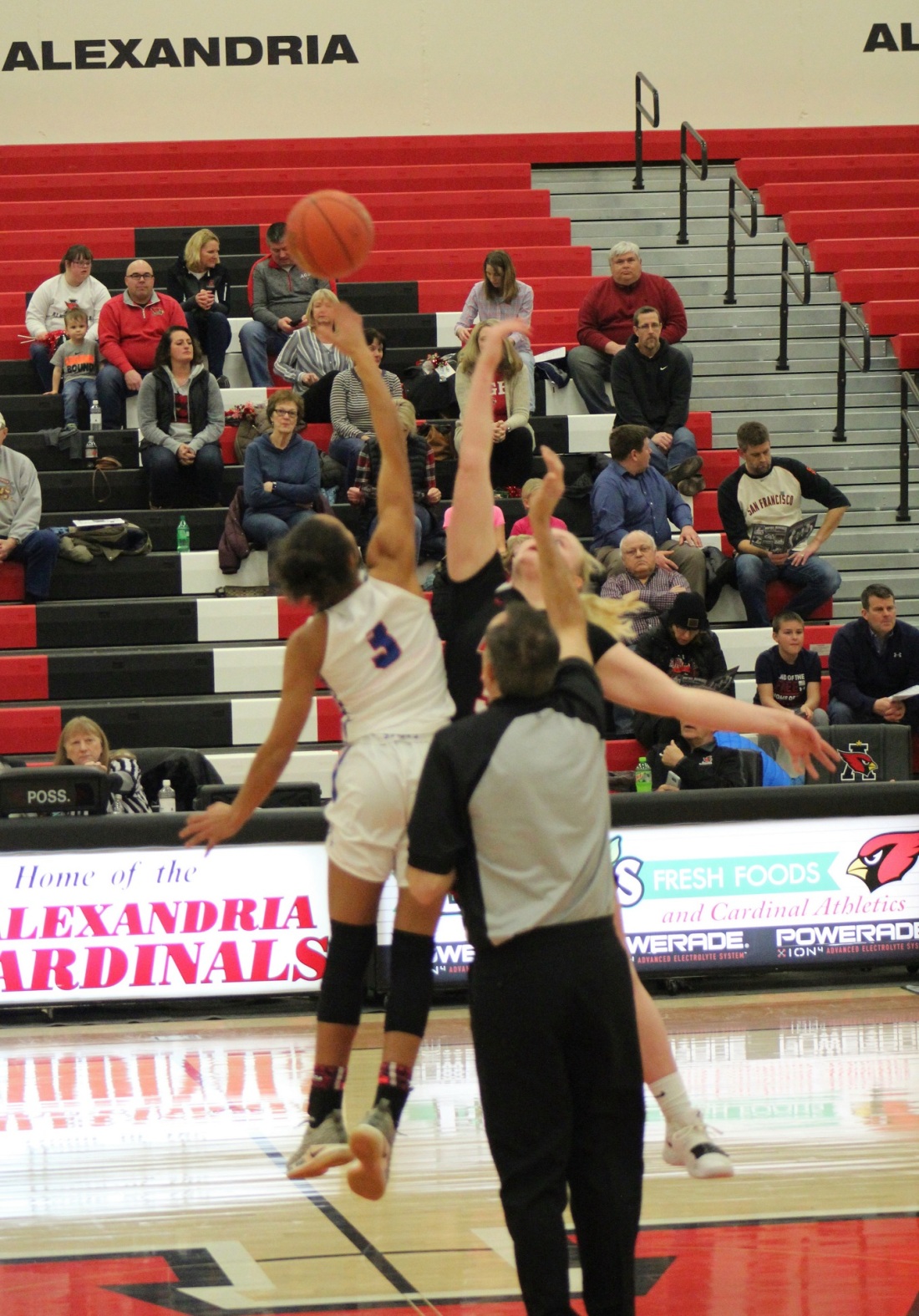 [Appears to be a Cardinal full court press.  Somehow we always seems to have two ball hawking guards every year to play this defense.  And this year, Mia McGrane (5) and Kaye have been playing those roles to perfection . . . ] 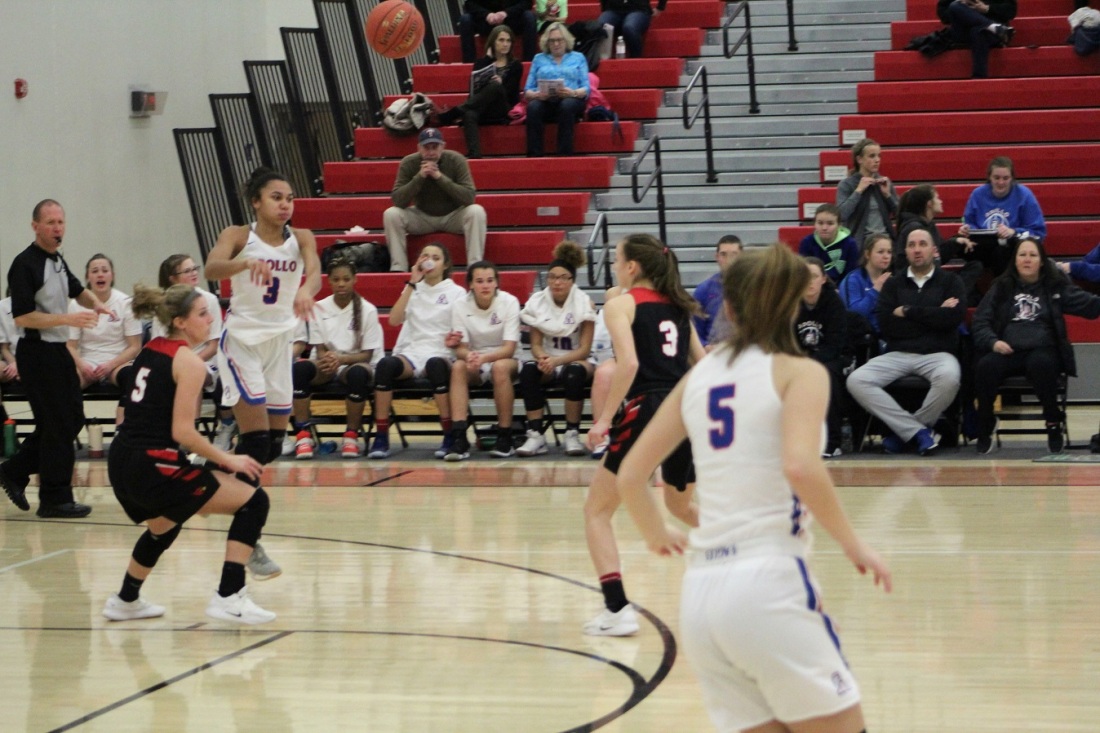 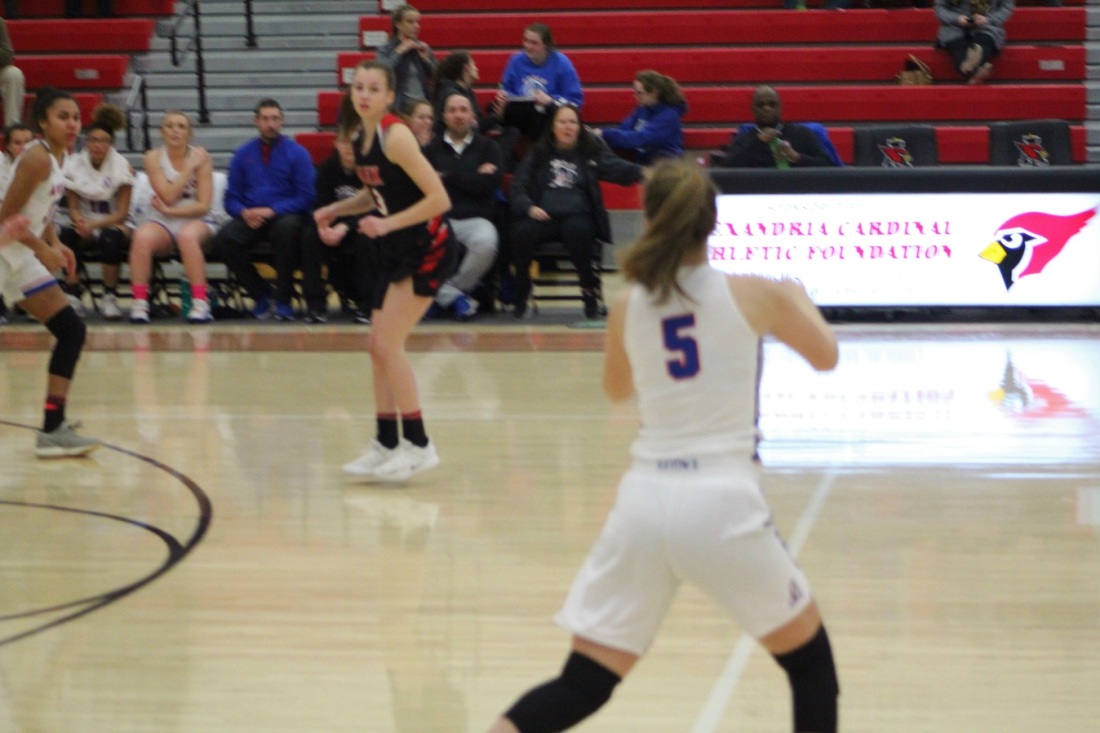 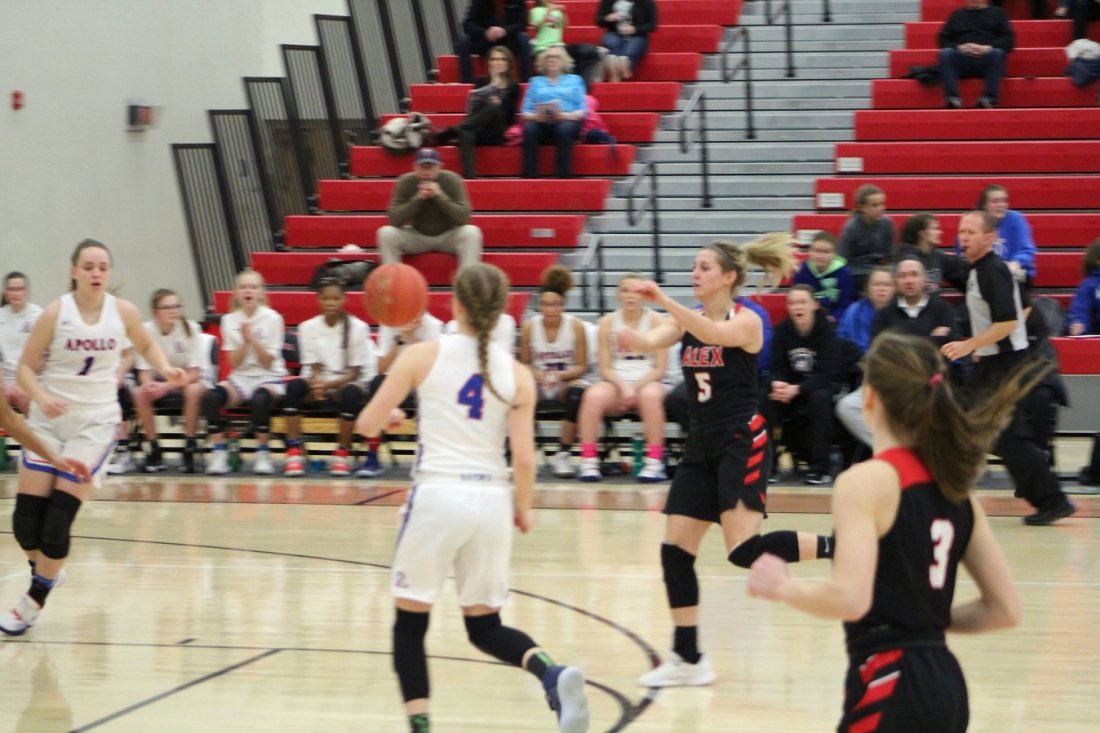 [The team traded blows for the first half of the half, matching shot for shot.  Here Mac has some free throws . . . ] 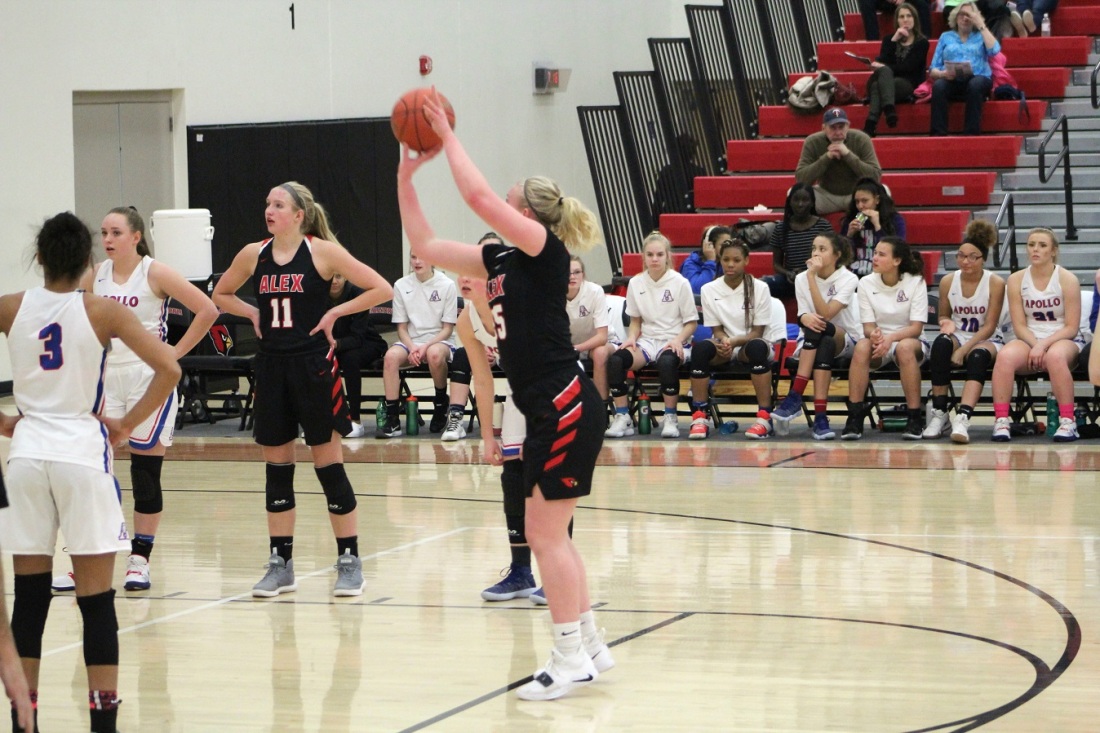 [Then the Cards dialed up the pressure to such an extent that Mr. Scott called the bridge and told Captain Kirk he didn’t know long his engines could hold up at that speed . . . ]

[Mia and Kaye were getting quick picks and layups . . . ] 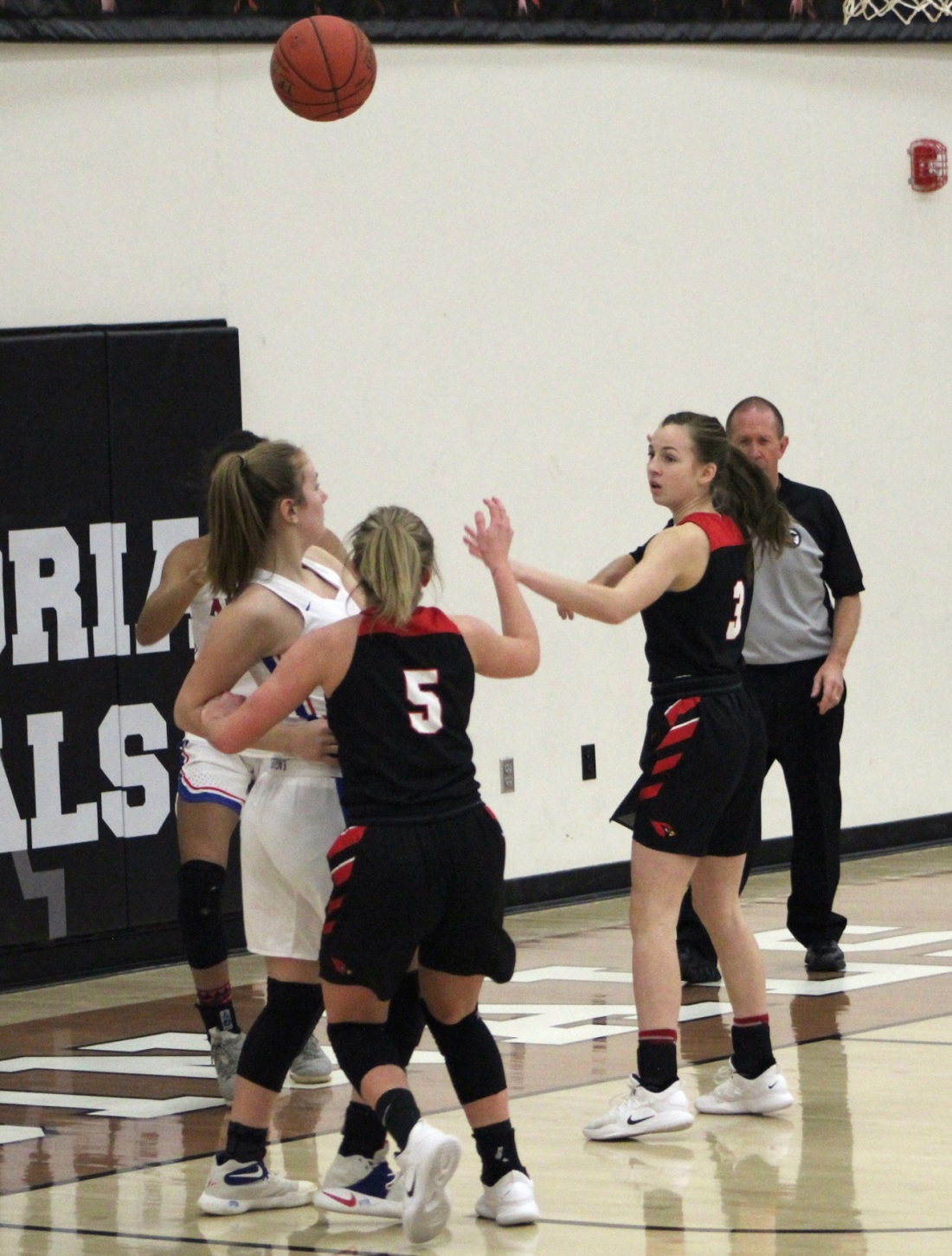 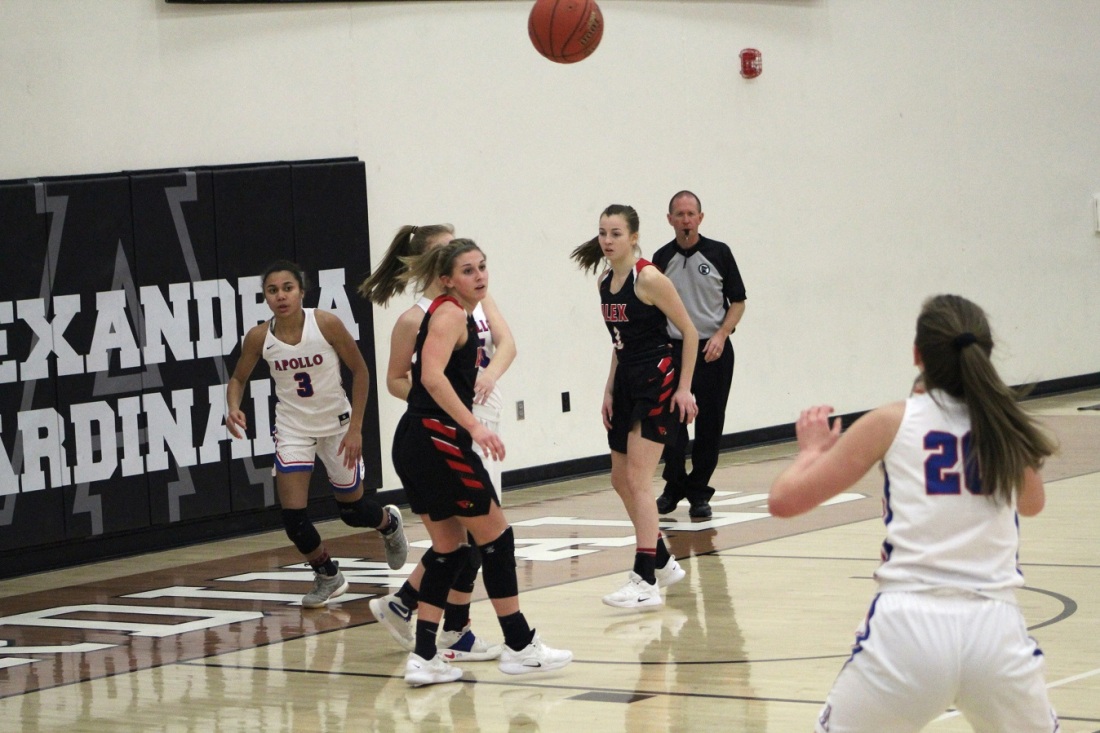 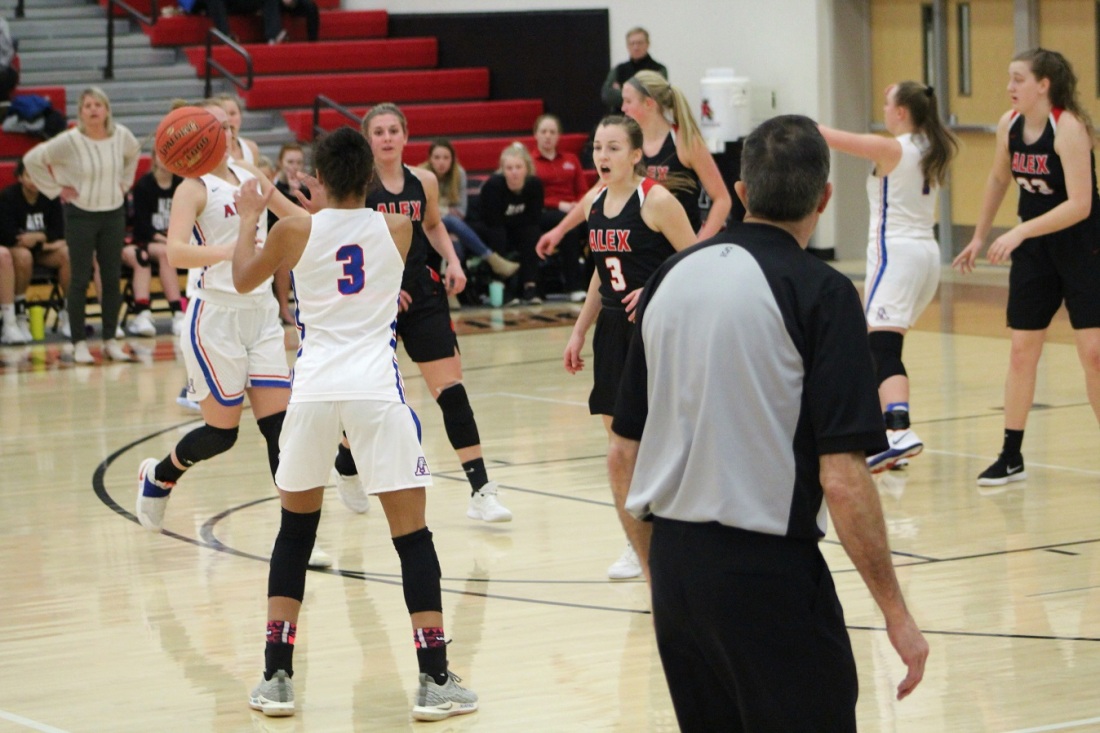 [The initial shot rolled off, but the Cardinals had 4 players there for a rebound . . . ]

[Under the basket inbounds play triggered by Mia . . . ] 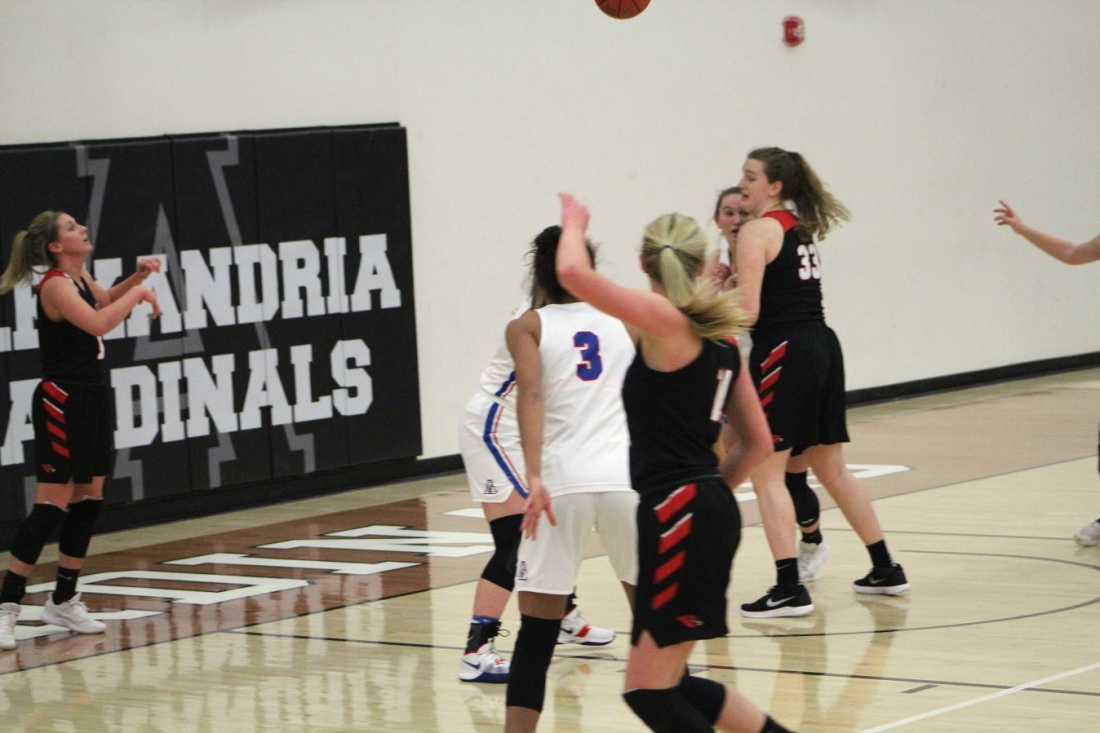 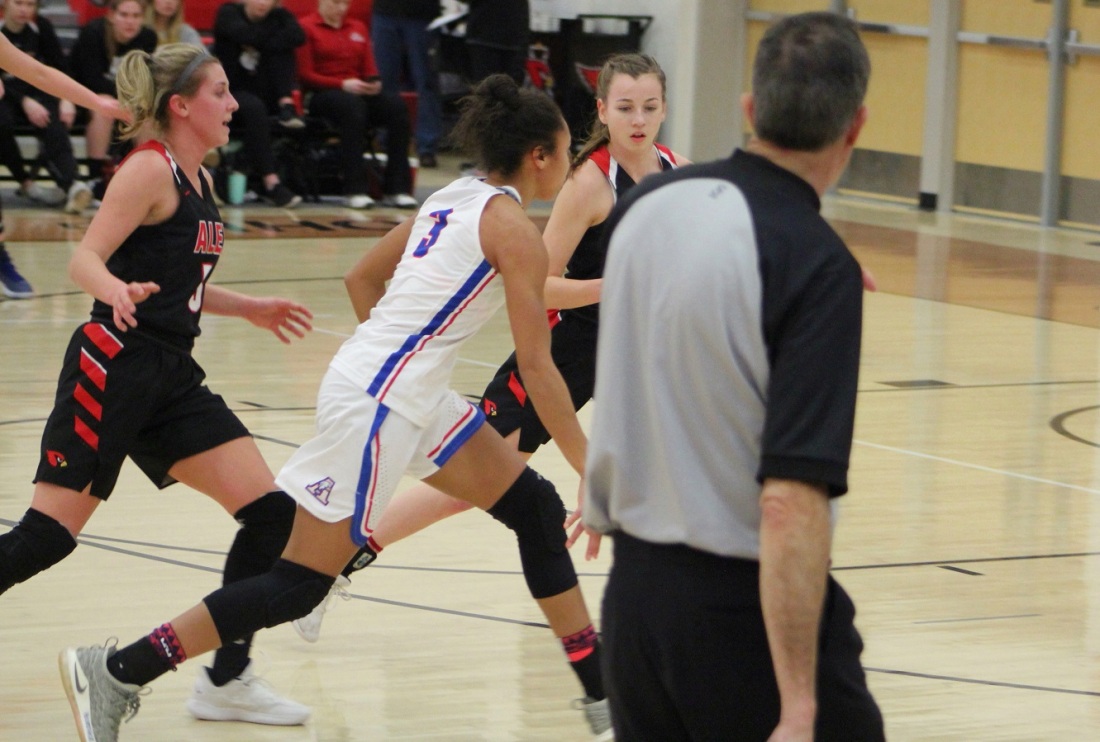 [In the game within the game, Kaye defended Washington holding her 25 points.  And yes, it was a really good defensive job.  And Kaye herself scored 19 . . . ] 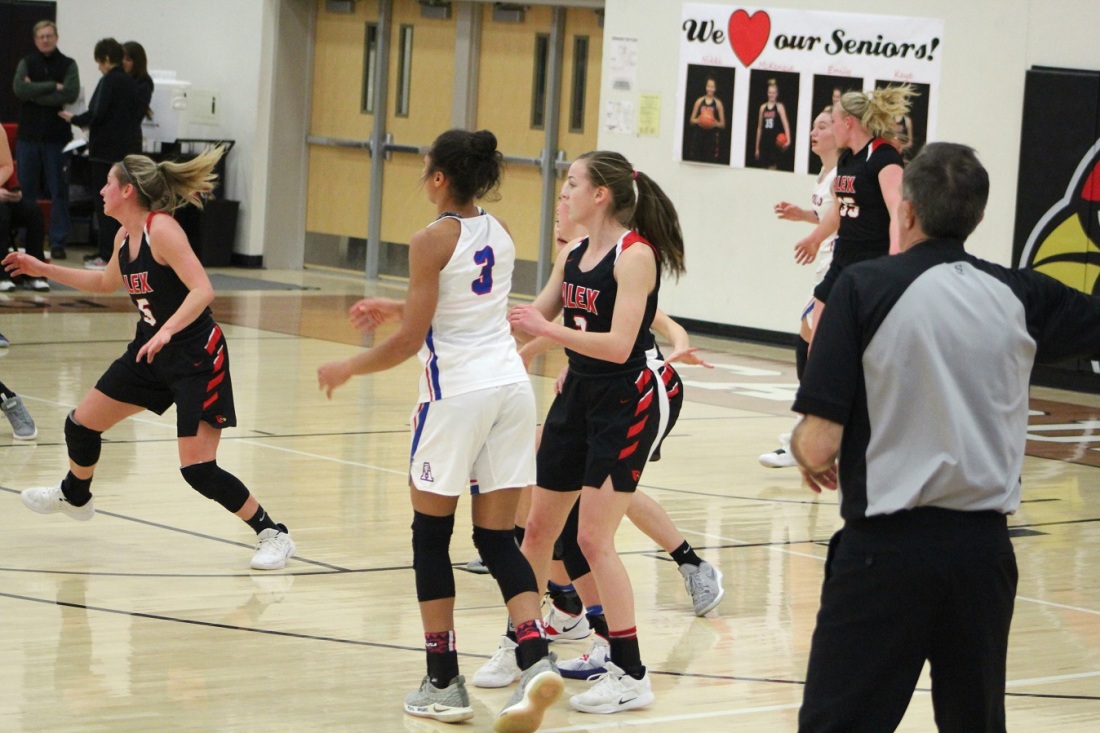 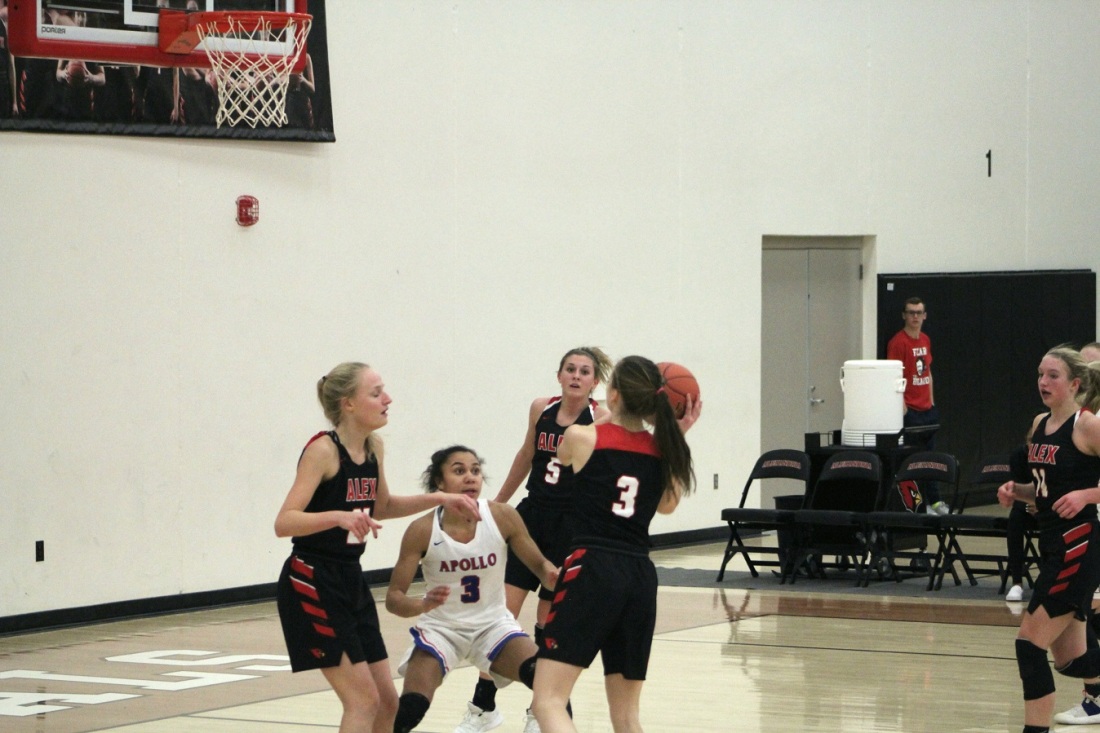 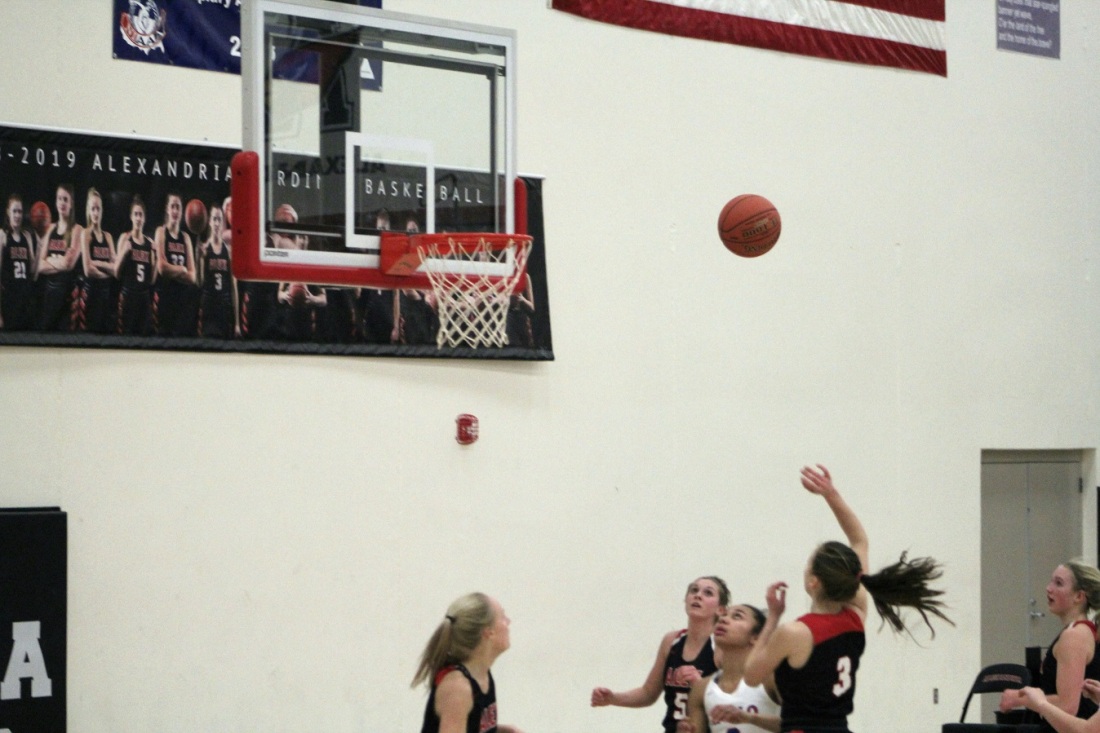 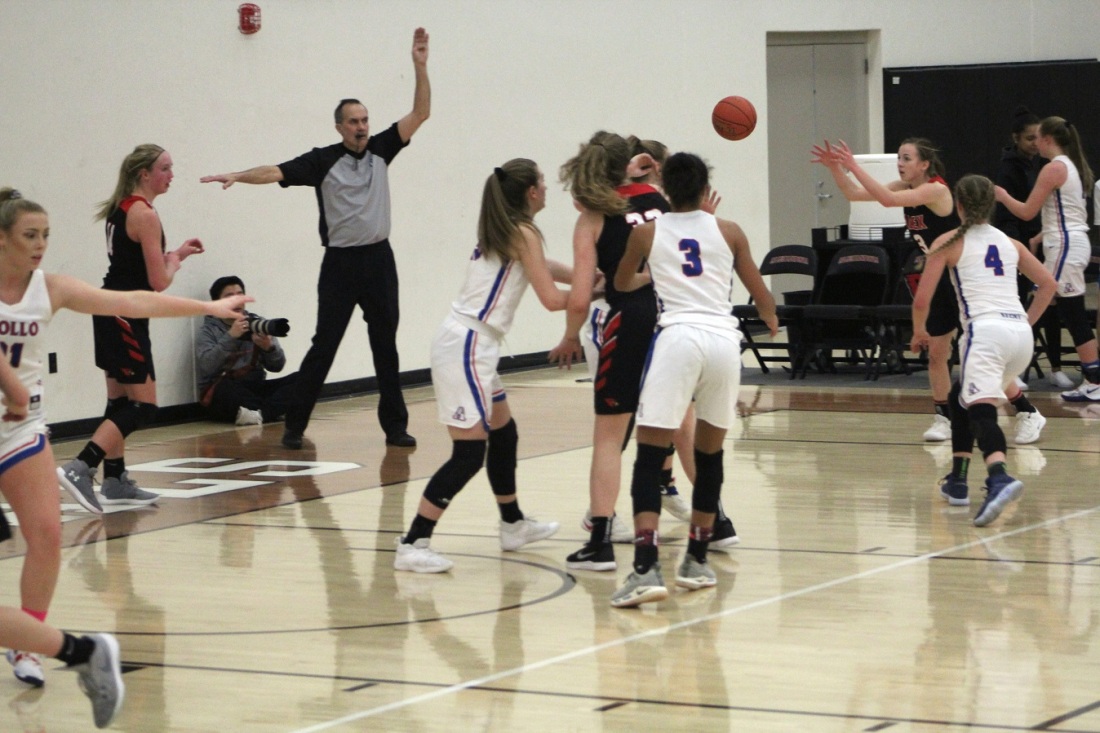 [One of those halves where the Cards got on a roll and kept rolling – five players in full sprint downcourt with every rebound, every steal – a thing of beauty and a joy forever . . . ] 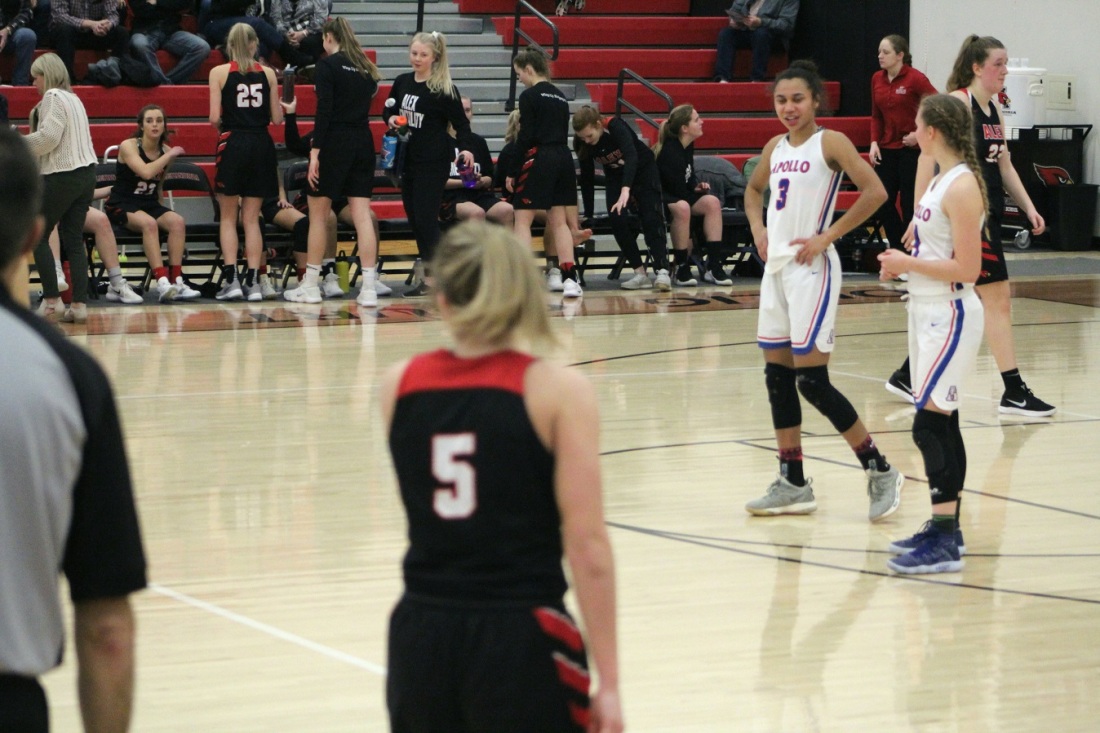 [While Kohler aligns the frontline players . . . ] 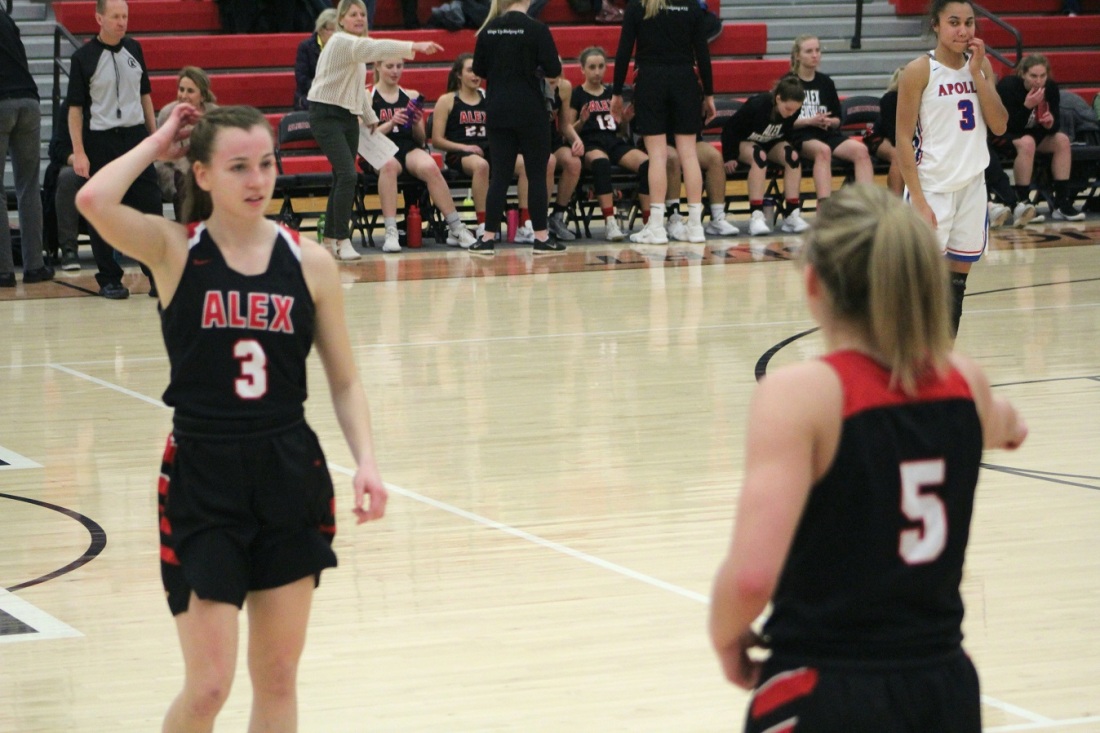 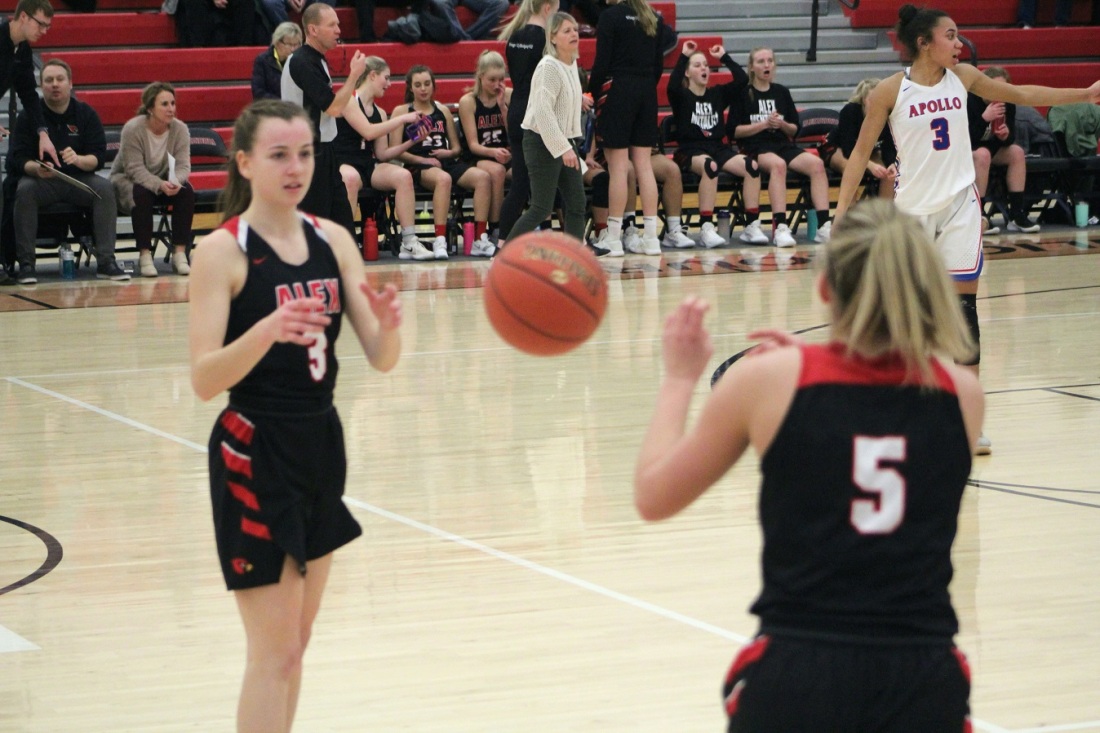 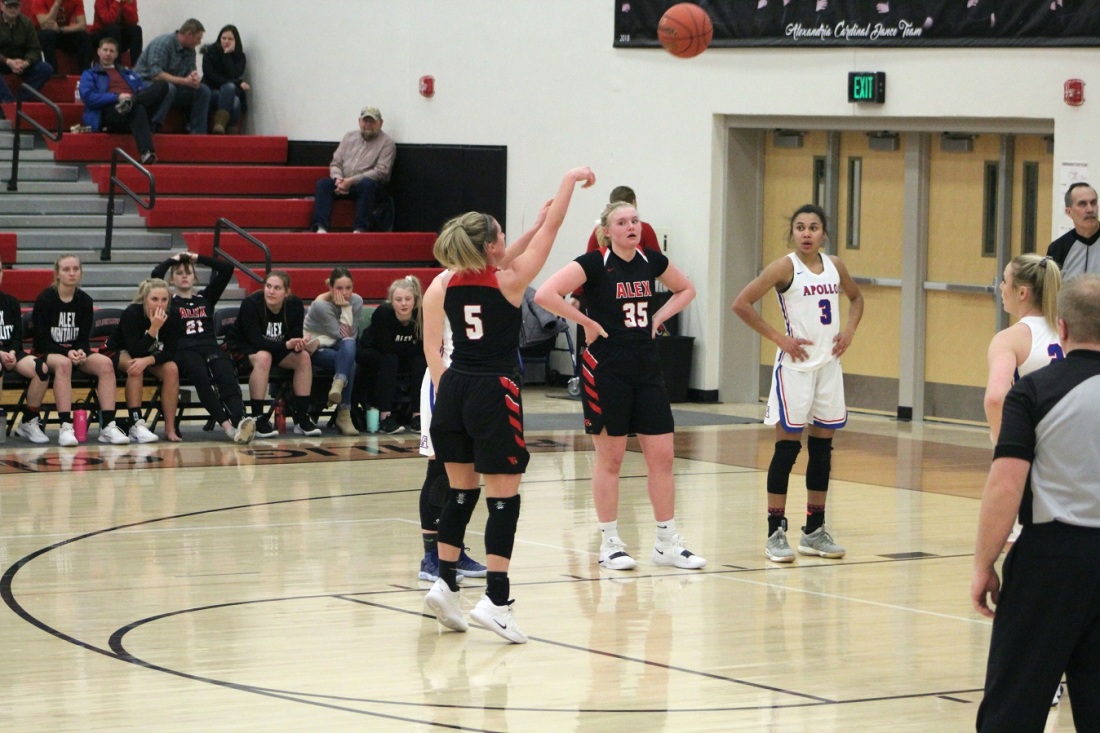 [Kaye chases Washington along the baseline . . . ]

[The ref calls a halt to the activities for a Kim Kardashian sighting . . . ] 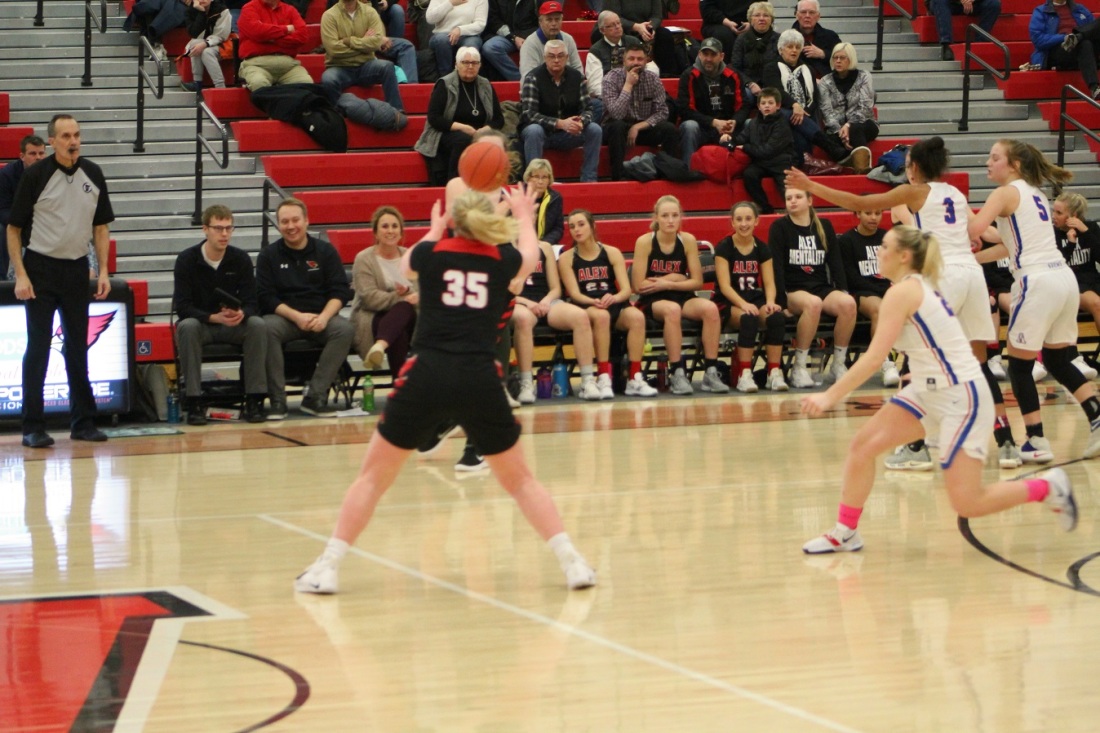 [With the big lead, the Cards took the air out of the ball, trying to get the Eagles to come out of their zone defense . . . ] 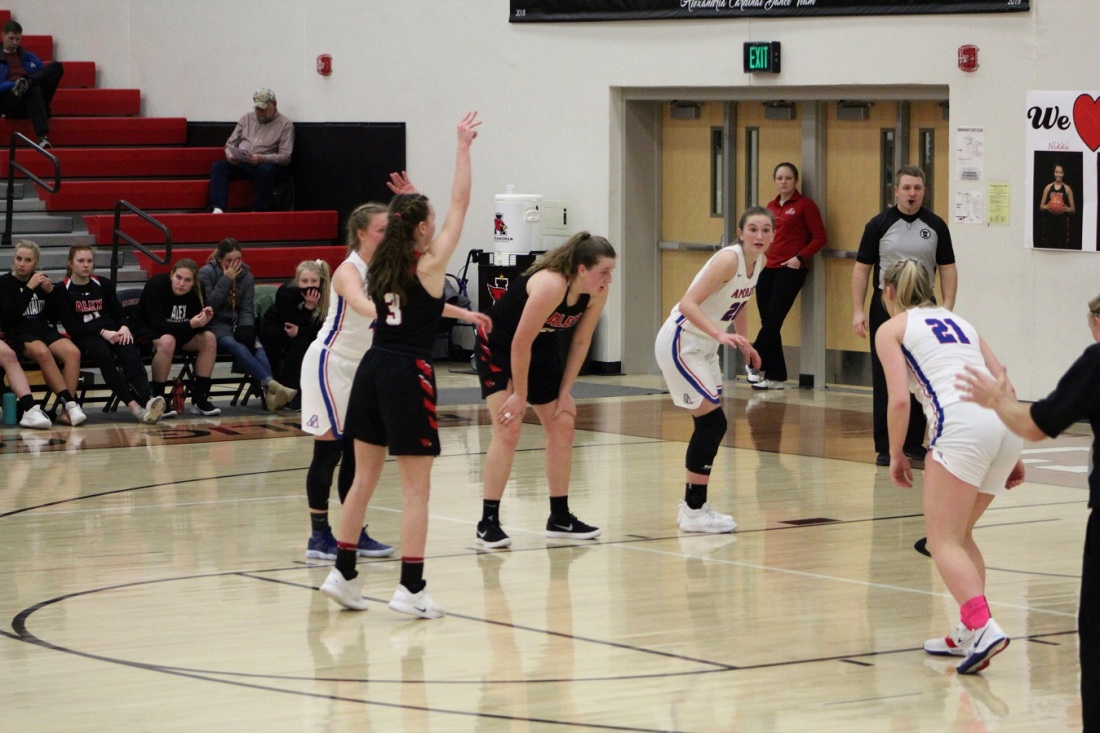 [This sequence best displays Cardinal basketball – Kaye, who always seems to be the fastest player on the court, on a breakaway after a steal . . . ] 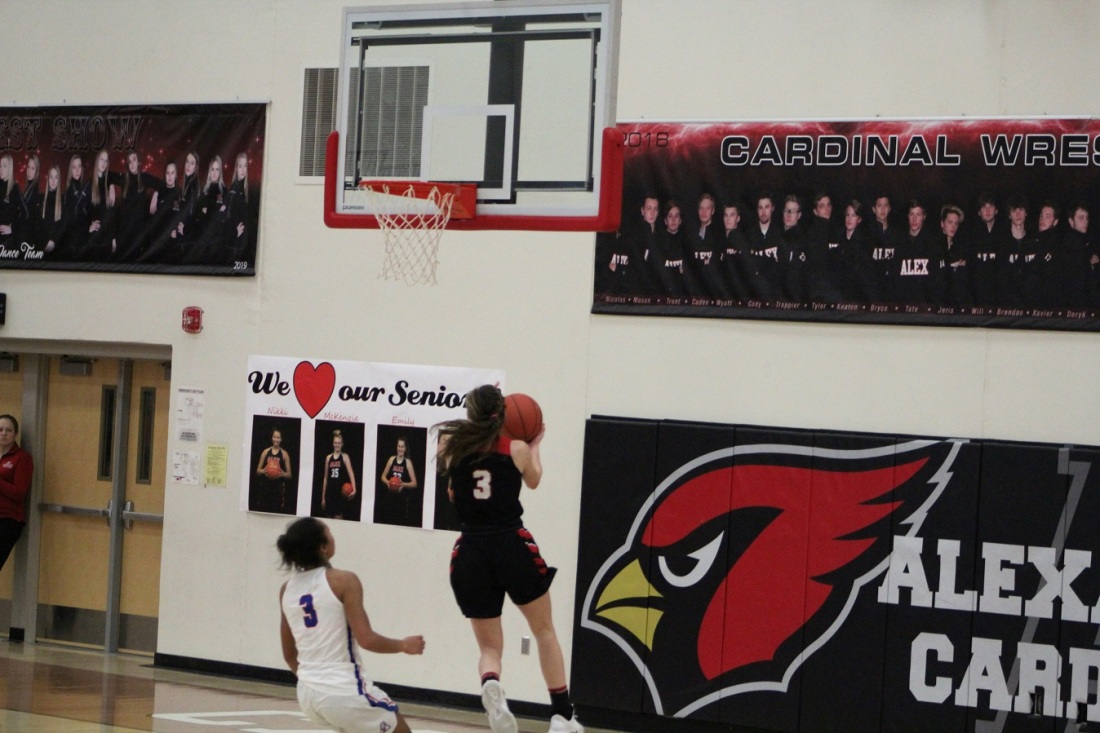 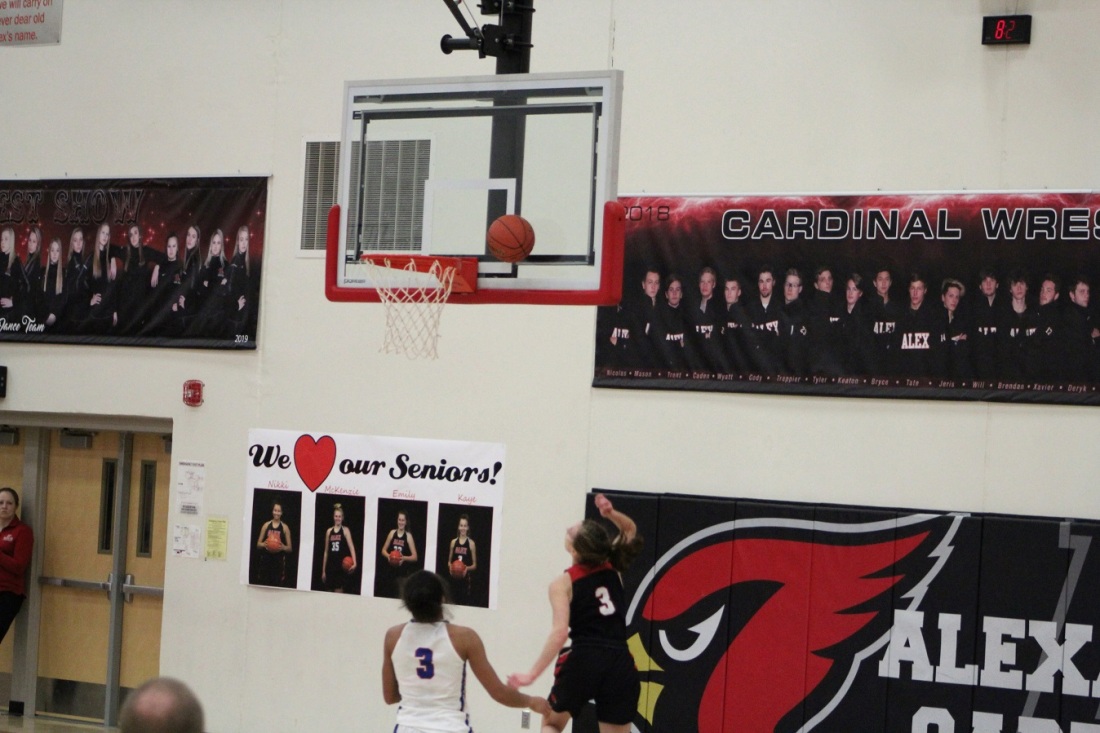 [Photo on loan from the Cardinal Connection.]

My coach said I run like a girl.  And I said if he ran a little faster he could too.  ~  Mia Hamm

Up Next:  Mia Hamm’s coach running?