[When last we left you, our tour guide Maria was leaving us – in a courtyard at the Alcazar . . . ]

[Now absent a leader, the tour group ambled aimlessly down a green archway . . . ]

[And for the rest of the day we would wander around Seville aided only by maps . . . ] 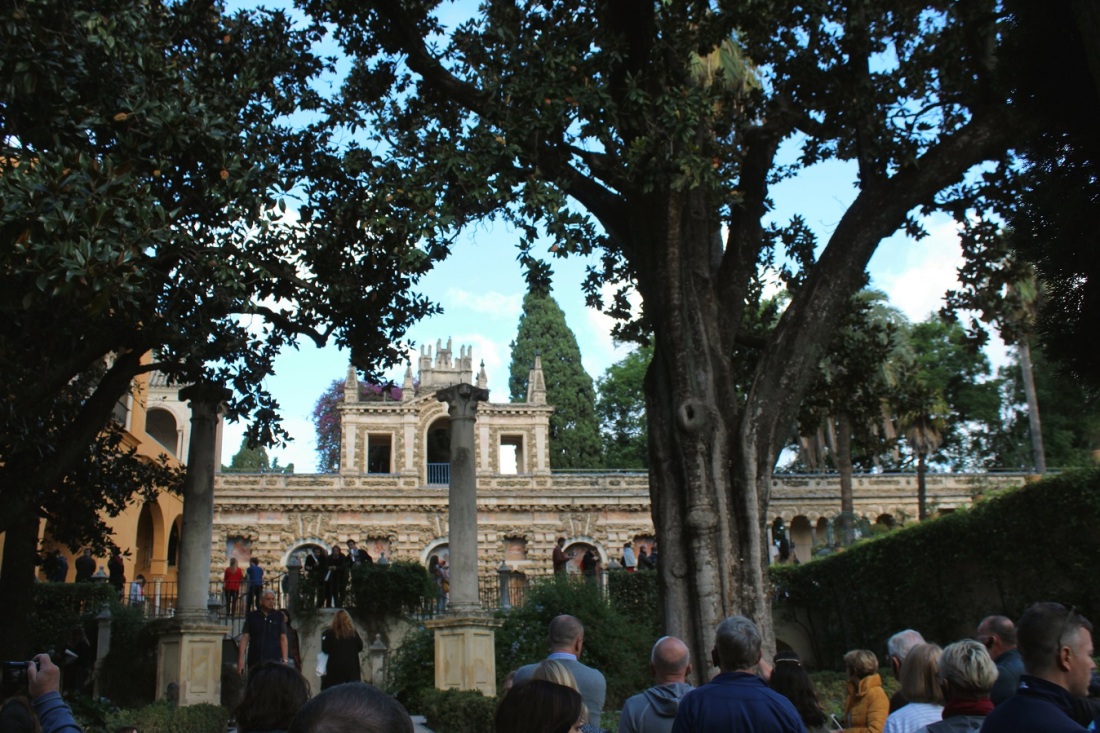 [Here we’re still on the grounds and gardens of the Alcazar . . . ] 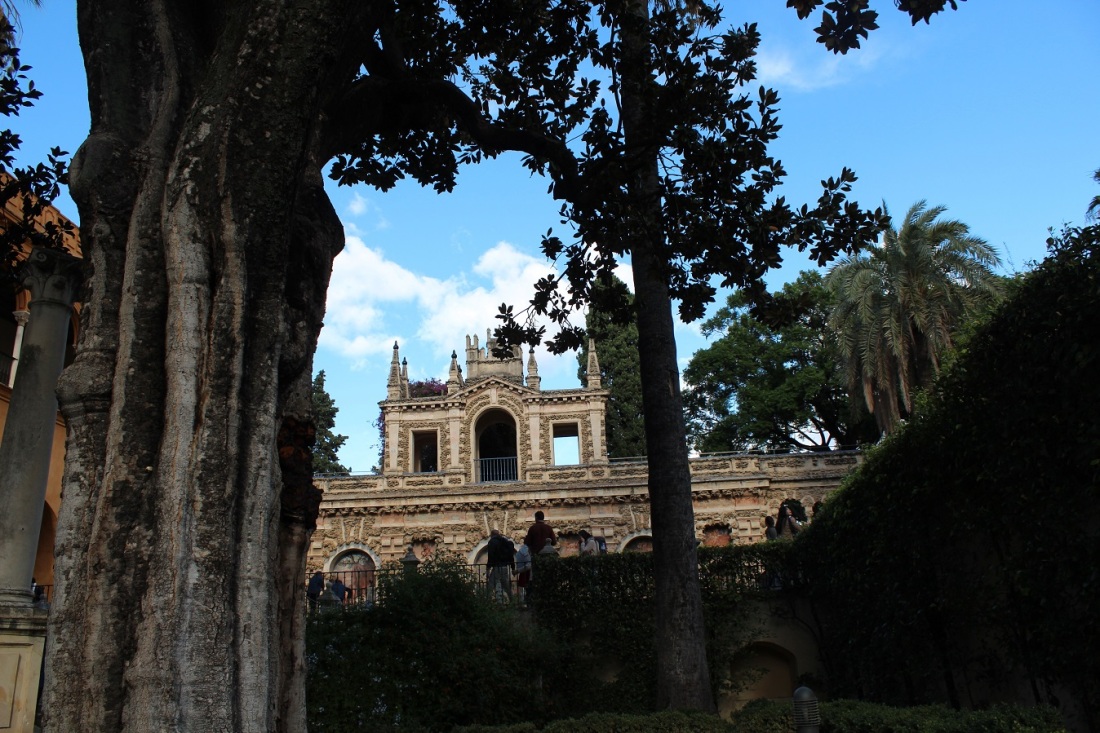 [Without fear of contradiction, palm trees . . . ]

[We’re still on th garden grounds, but I’m apparently the first person ever to take a picture of this structure (at least with the Super and Anne in the photo) . . . ] 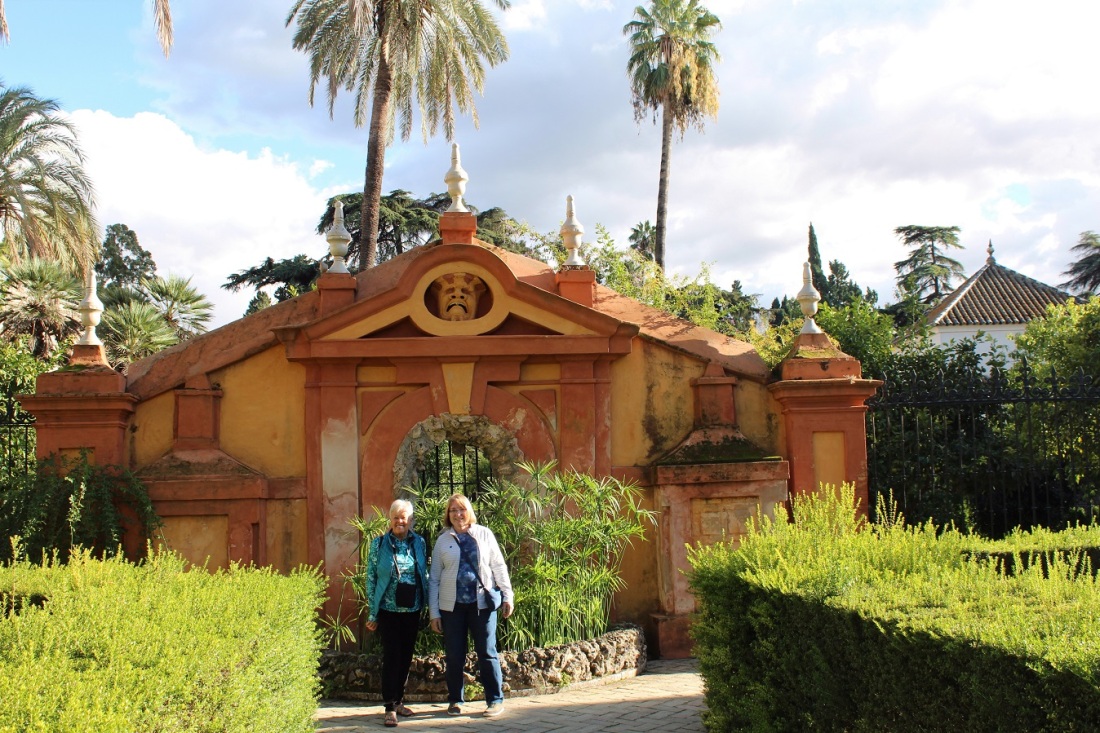 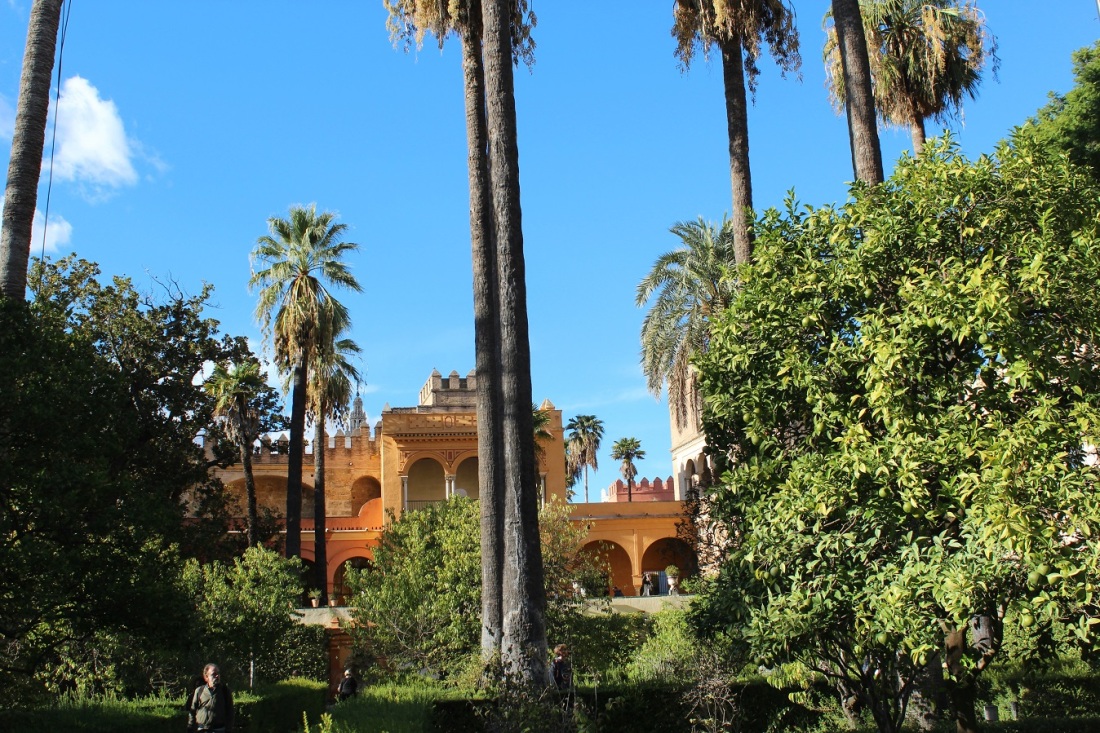 [And then Anne discovered an escapee from a Dr. Seuss movie . . . ]

[No animals were injured in the filming of this photo . . . ]

[Continuing around the picturesque grounds . . . ] 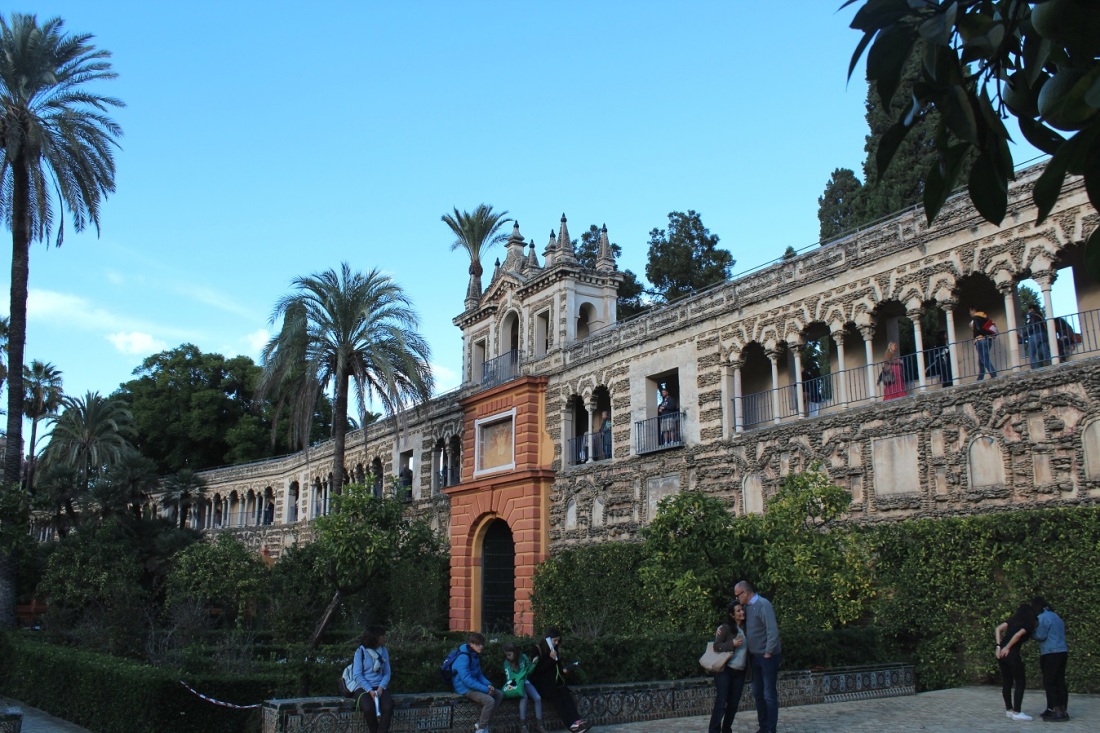 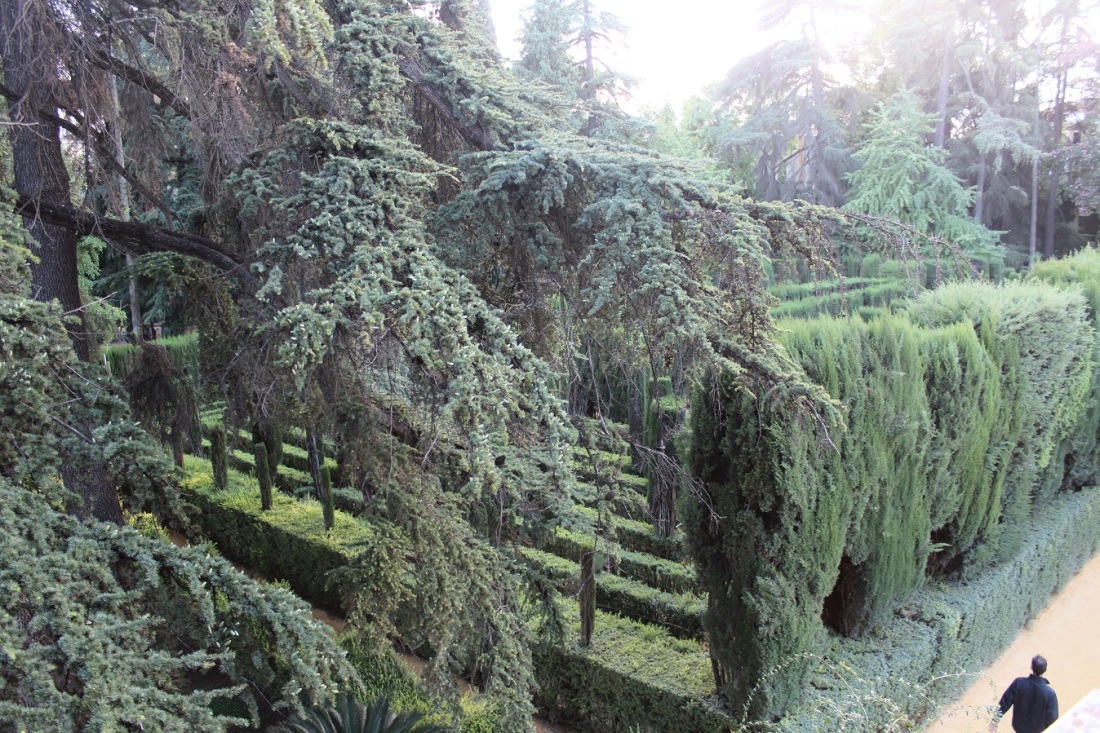 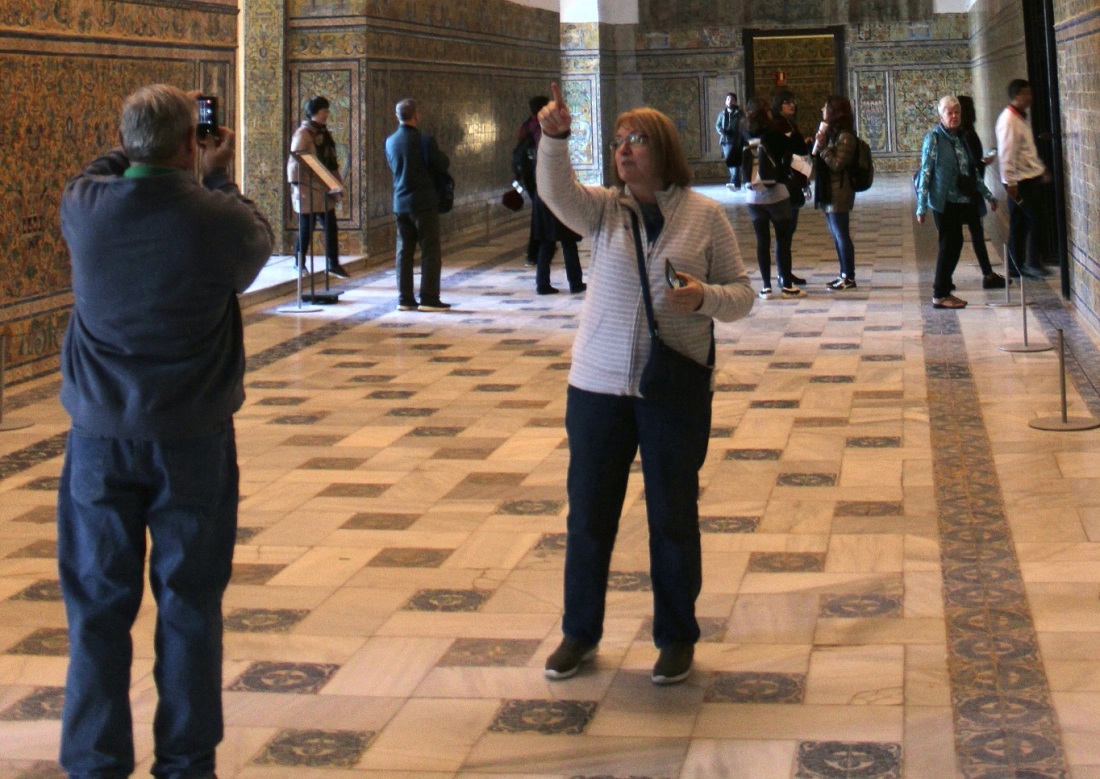 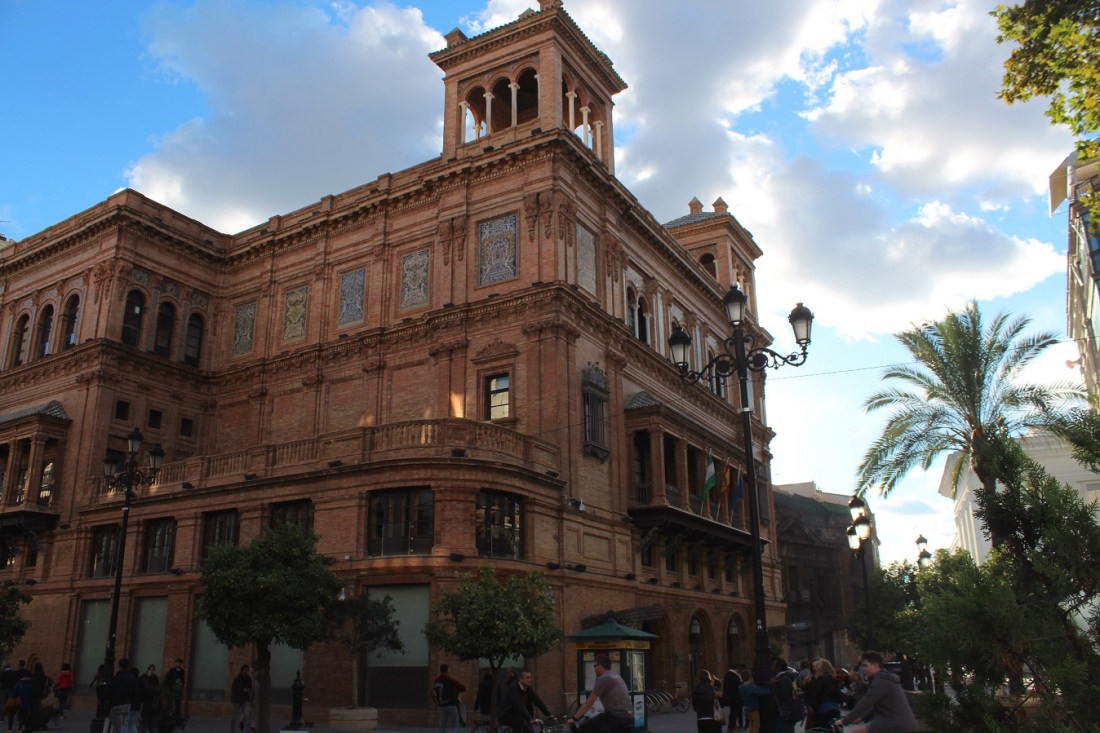 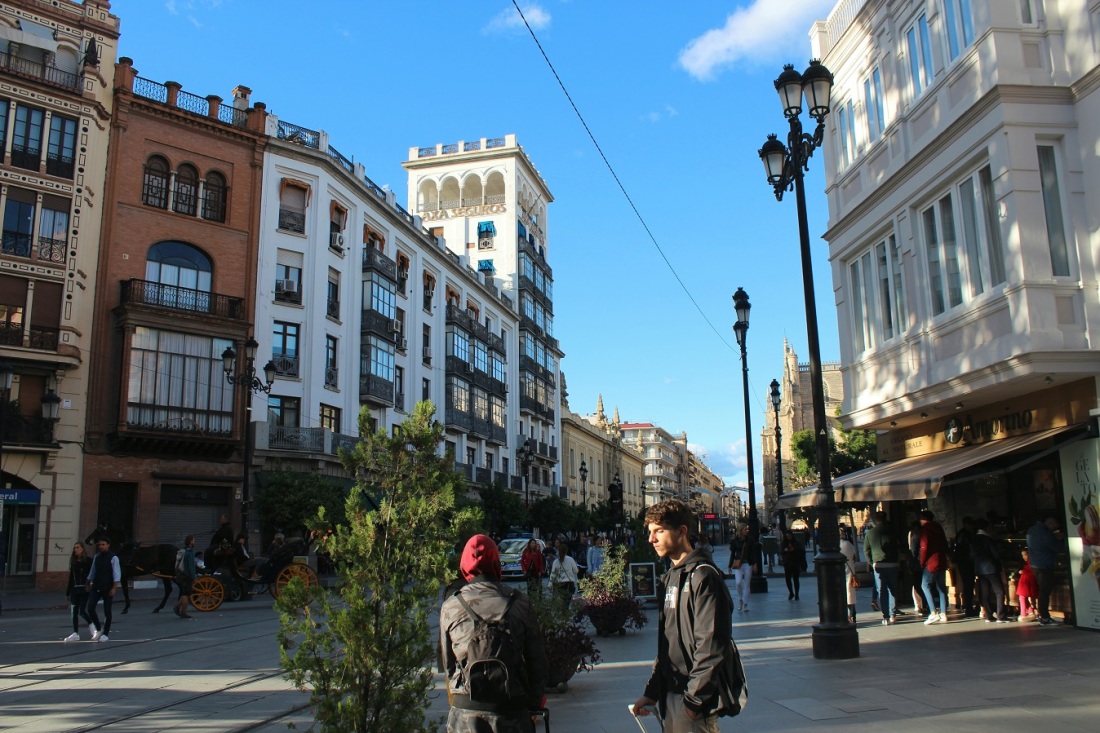 [The name of Puerta de Jerez is derived from when this square was a Roman gate leading into Sevilla from the town of Jerez de la Frontera. The plaza’s focal point is the Fountain of Híspalis. Similar to the adjacent Alfonso XIII Hotel, the Fountain of Seville was built to delight visitors attending the Ibero-American Exposition of 1929. The statues of the woman and children by sculptor Manuel Delgado Brackenbury are allegories. They represent the historical city when the Romans called it Híspalis (www.encirclephotos.com).] 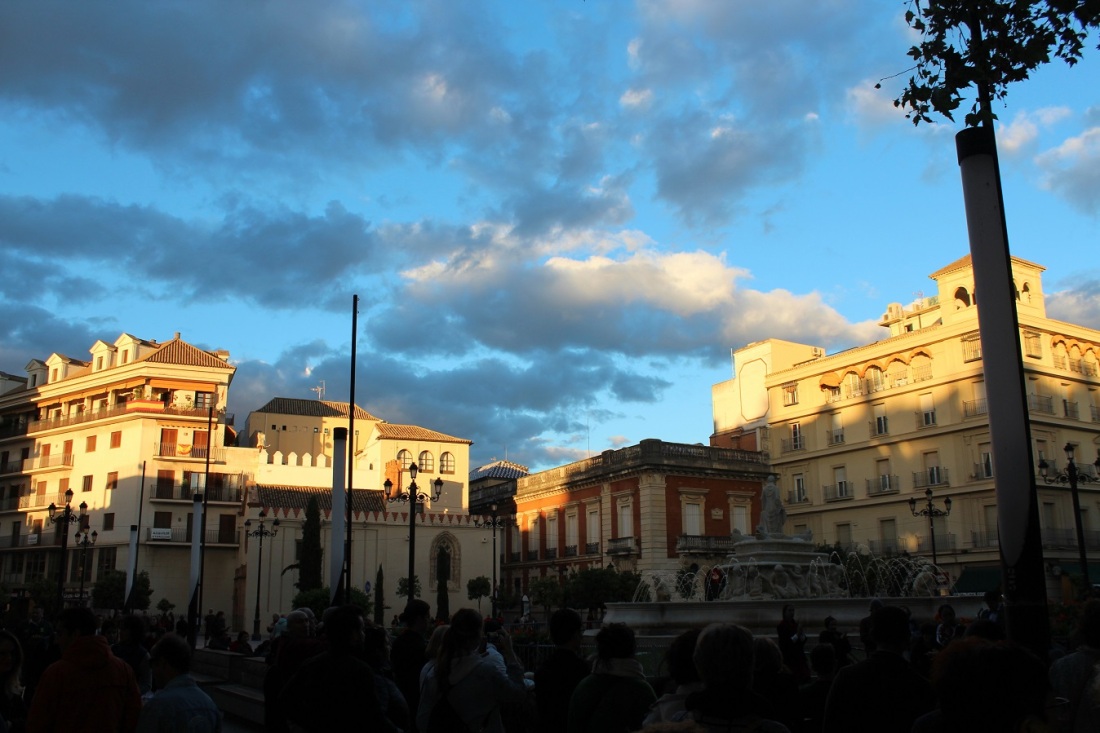 [We’re walking now toward the tower and the Guadalquivir River . . . ]

[The Torre del Oro (“Tower of Gold”) is a dodecagonal military watchtower.  It was erected by the Almohad Caliphate in order to control access to Seville via the Guadalquivir River.  Constructed in the first third of the 13th century, the tower served as a prison during the Middle Ages.  Its name comes from the golden shine it projected on the river, due to its building materials (a mixture of mortar, lime, and pressed hay).  The Torre de la Plata, an octagonal tower, is located nearby, and is believed to have been constructed during the same era (Wikipedia)]. 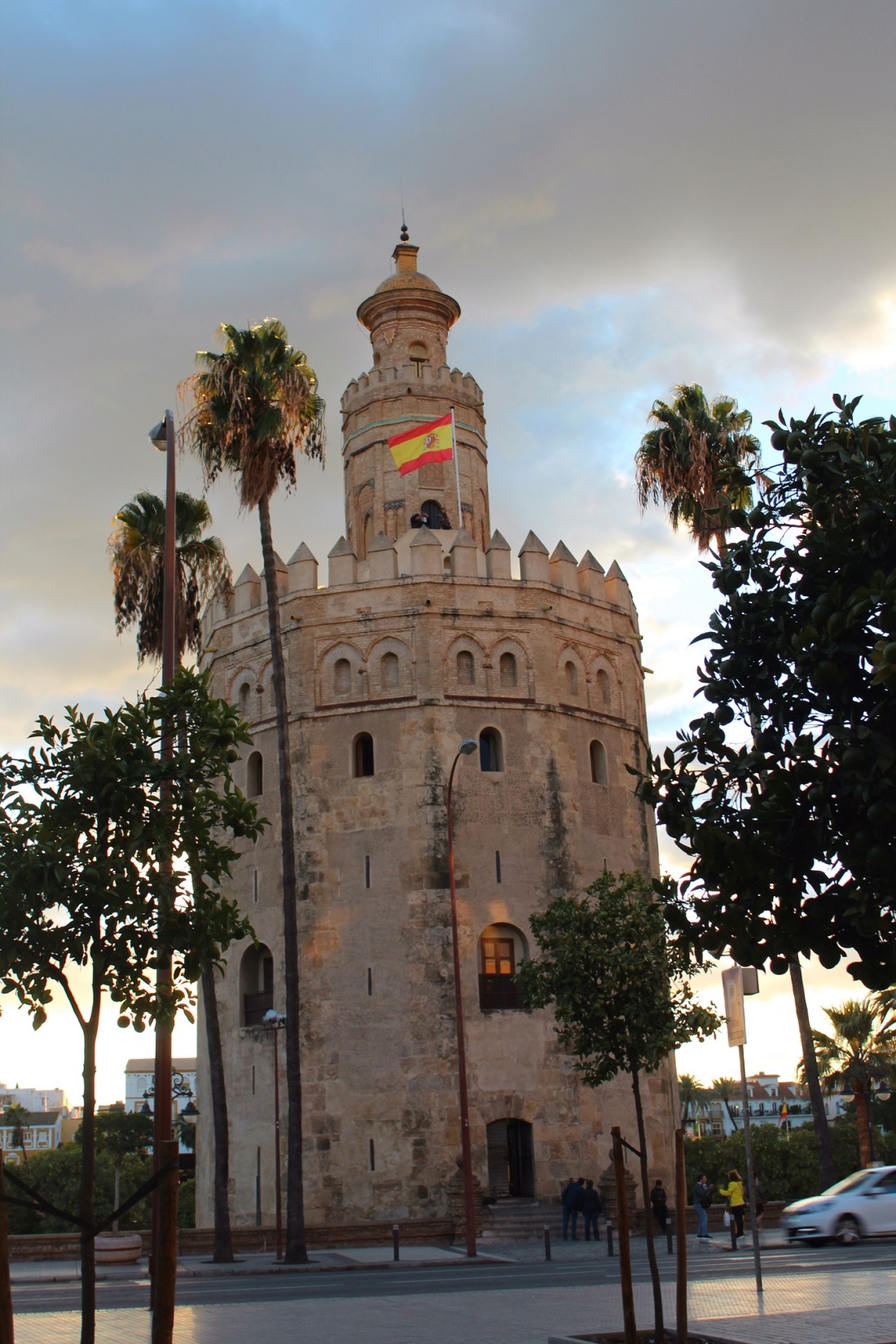 [A now for a stroll along the river walk on a beautiful evening . . . ]

[Plaza de Toros de la Maestranza:  The historic bullring of Seville was built in the eighteenth century. The arena, which has a seating capacity of about 12,500, is one of the most famous bullrings in all of Spain (www.aviewoncities.com).] 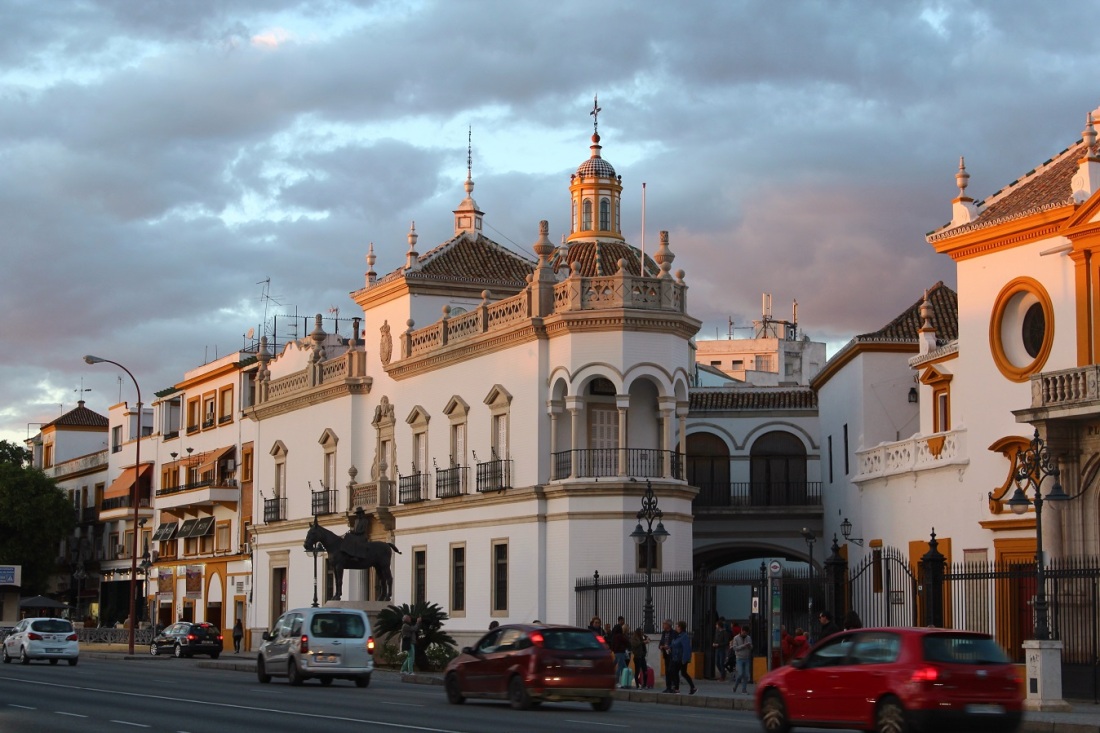 [And the palm trees along the Guadalquivir . . . ] 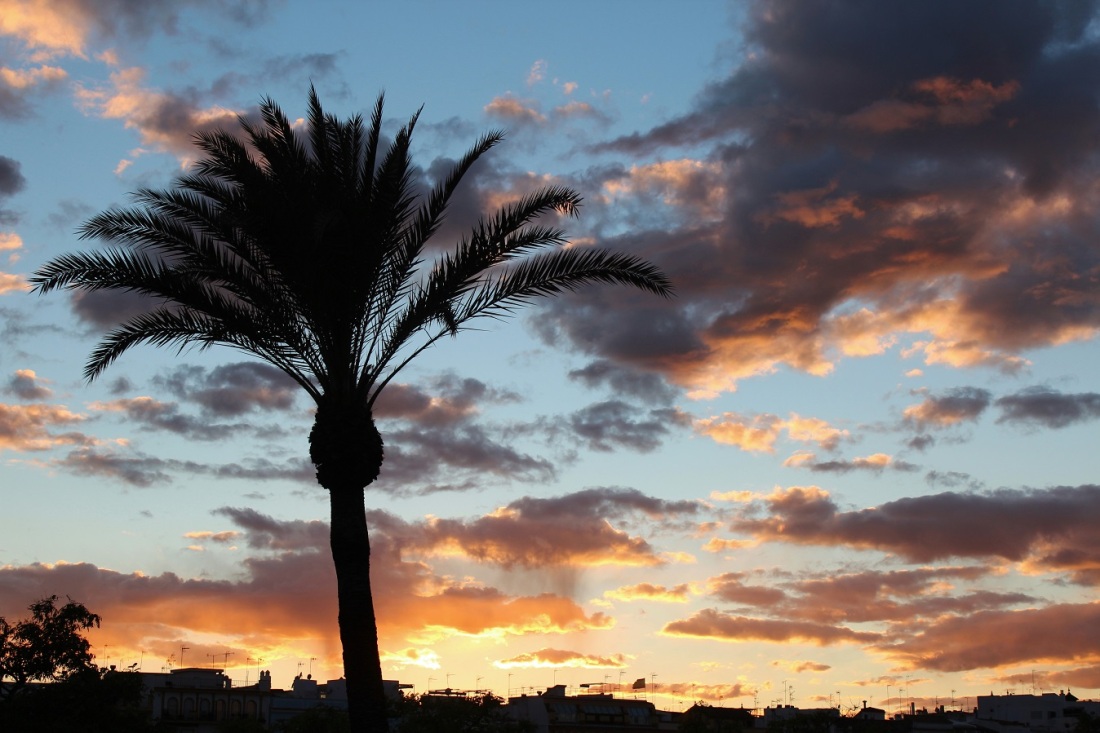 [In 1997, he was awarded the Andalusian medal for his unparalleled mastery and singular plastic splendor as a bullfighter and in 2002 the Gold Medal of the Fine Arts of the Spanish state that was delivered to him in Granada on September 17, 2003 by the king Juan Carlos I.  After his death in August 2005, the mayor of Seville reported the construction of a monument as a tribute to his figure.  This monument, located in front of the Bullring of the Real Maestranza de Sevilla, was inaugurated on June 11, 2009, in which the bullfighter is represented at the moment of citing a bull with the crutch.  It is the work of the sculptor Luis Alvarez Duarte (Wikipedia).]

[She was a fervid fan of bull fighting and of the Andalusian culture. In 1995, her granddaughter Infanta Elena married in Seville in part because the Countess’ love for the city (Wikipedia).] 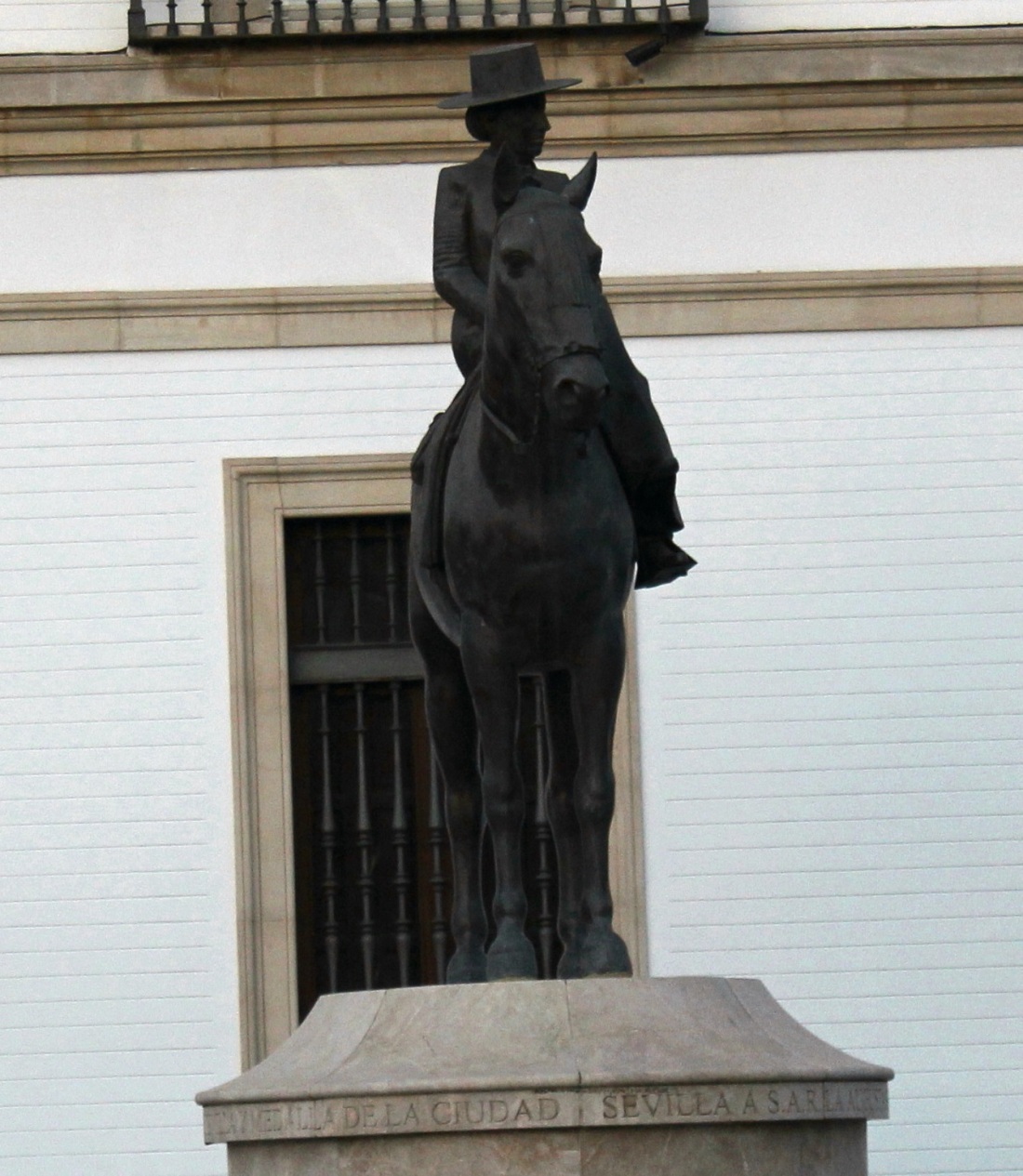 [Looking a place to cross the street to the bullring side, this looked like a fun outdoor restaurant . . . ] 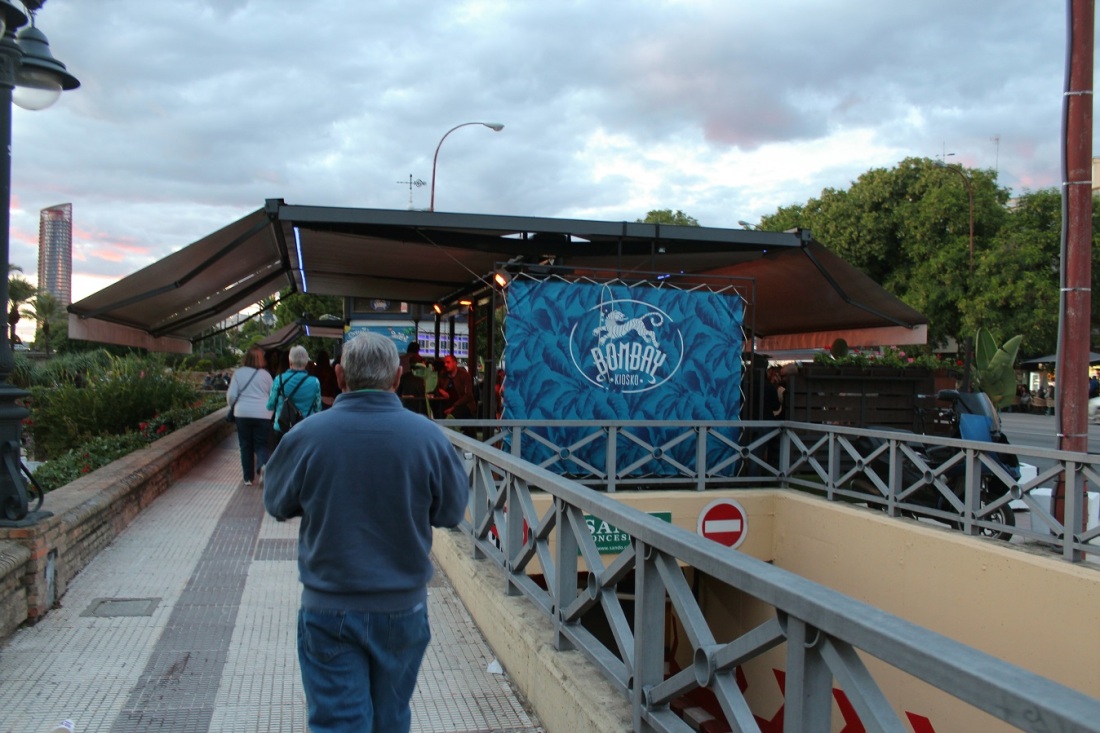 [The monument to ‘La Tolerancia’ by Eduardo Chillida . . . ] 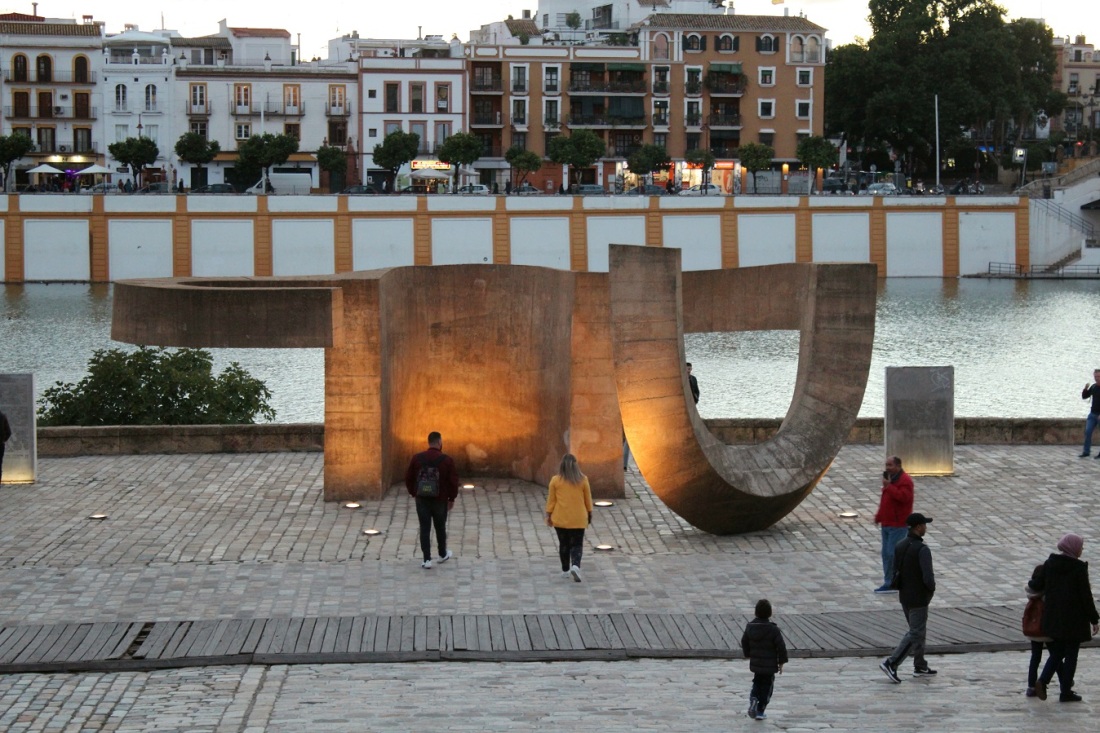 [Aha, a place to cross with busy night life beginning on the far side . . . ] 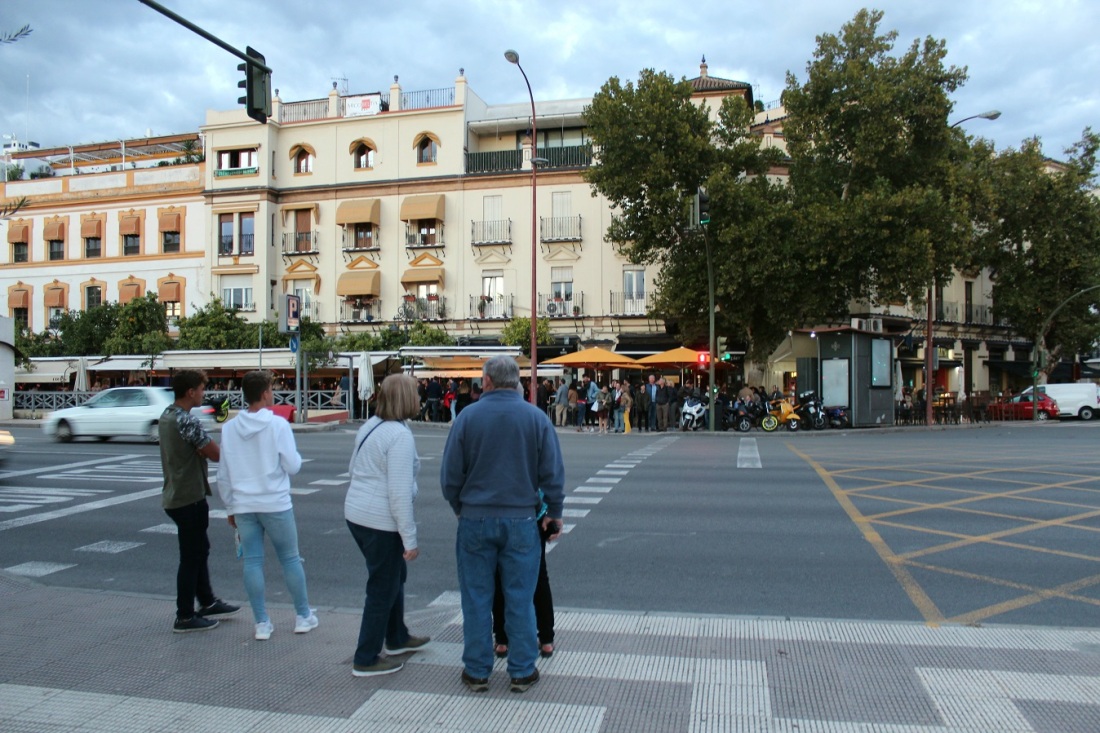 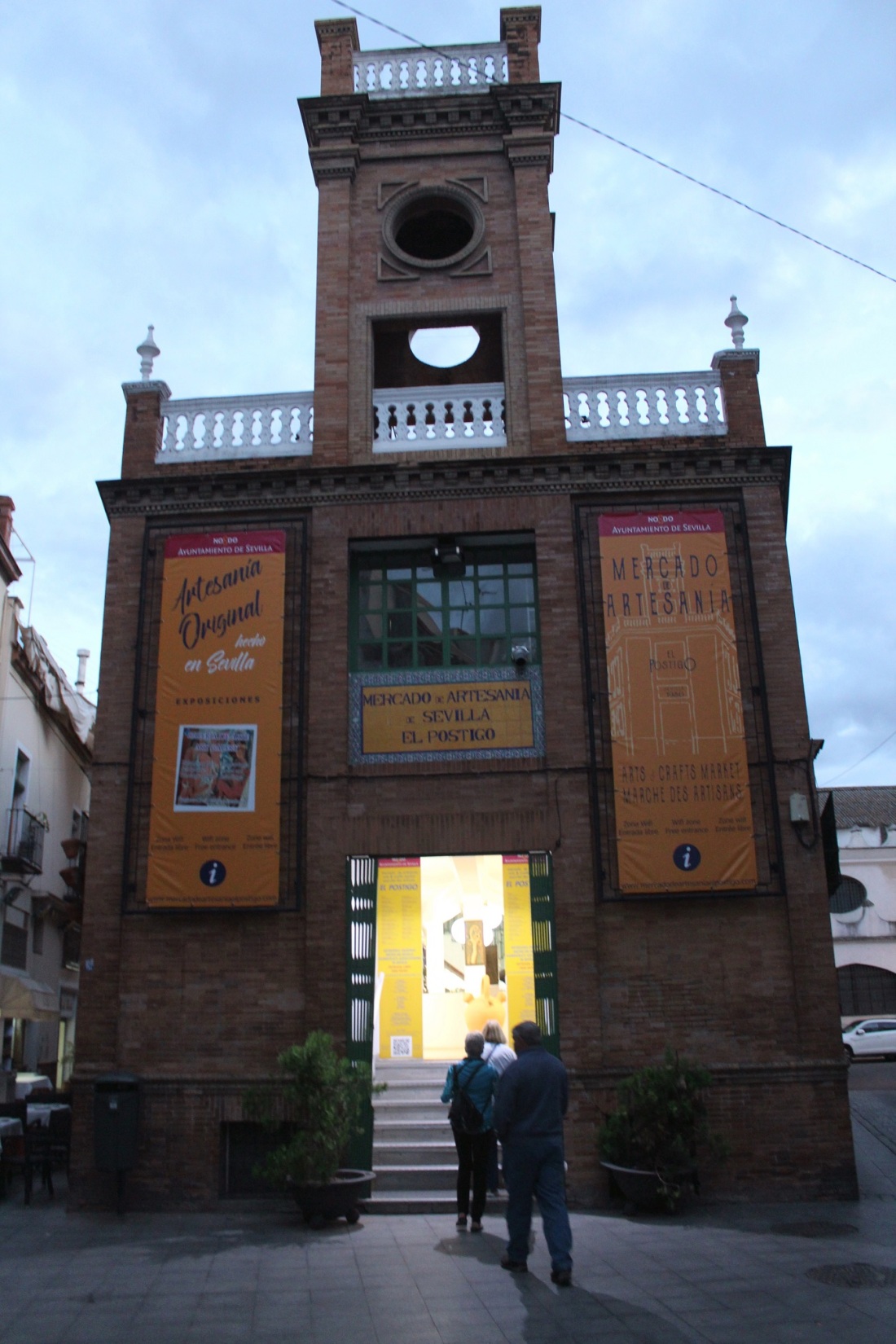 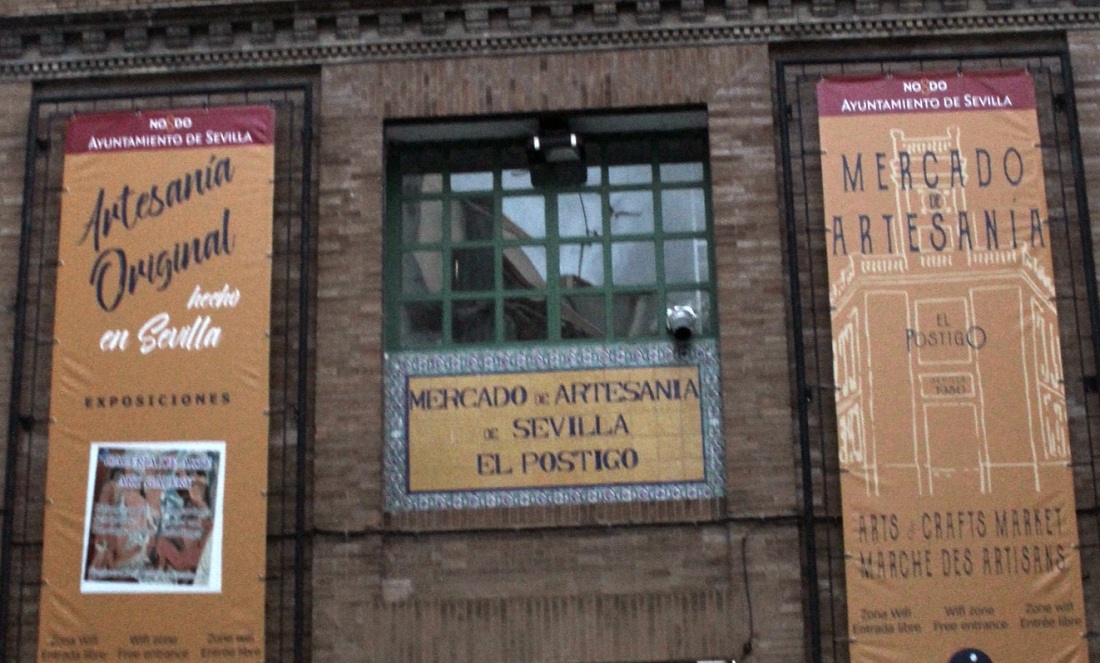 [And completing our day at the Seville Cathedral . . . ]

[The Cathedral of Saint Mary of the See, better known as Seville Cathedral, is a Roman Catholic cathedral.  It was registered in 1987 by UNESCO as a World Heritage Site, along with the adjoining Alcazar palace complex and the General Archive of the Indies.  It is the third-largest church in the world (its size remains a matter of debate) as well as the largest Gothic church.  After its completion in the early 16th century, Seville Cathedral supplanted Hagia Sophia as the largest cathedral in the world, a title the Byzantine church had held for nearly a thousand years.  The total area occupied by the building is 23,500 square metres (253,000 sq ft).  The Gothic section alone has a length of 126 metres (413 ft), a width of 83 metres (272 ft) and its maximum height in the center of the transept is 37 metres (121 ft).  The total height of the Giralda tower from the ground to the weather vane is 96 metres (315 ft).  Since the world’s two largest churches (the Basilica of the National Shrine of Our Lady of Aparecida and St. Peter’s Basilica) are not the seats of bishops, Seville Cathedral is still the largest cathedral in the world (Wikipedia).] 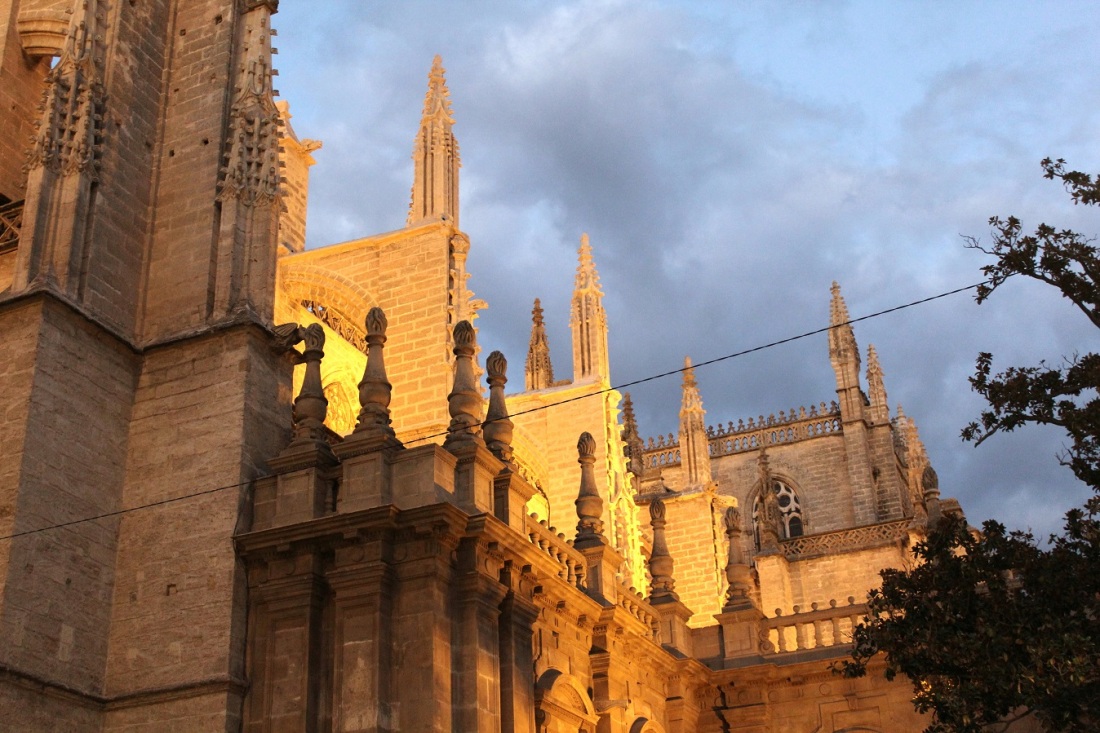 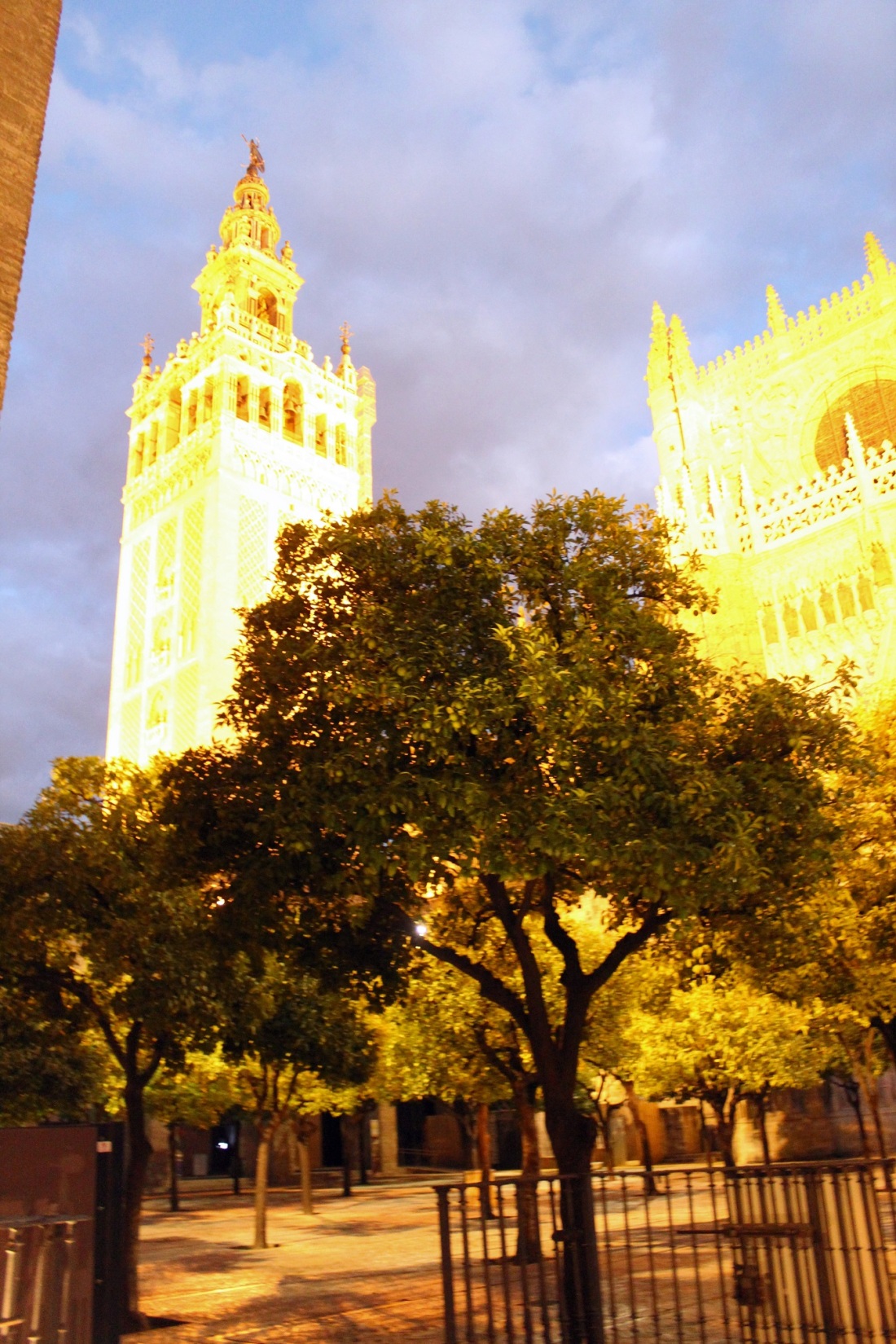 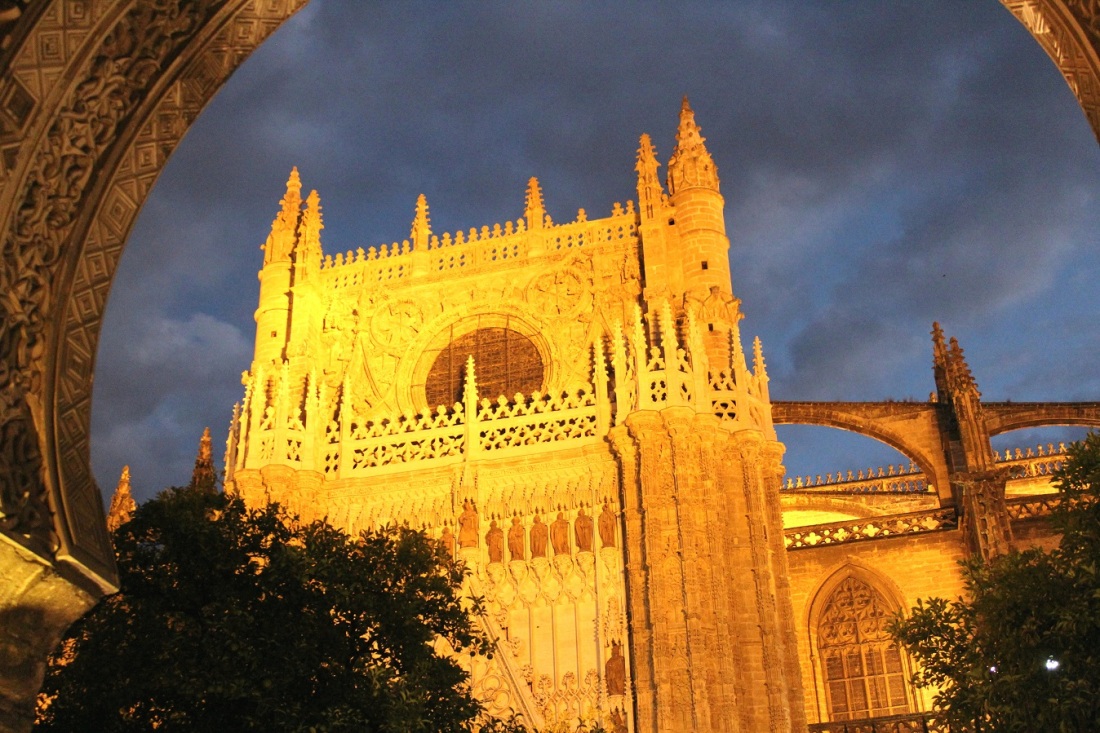 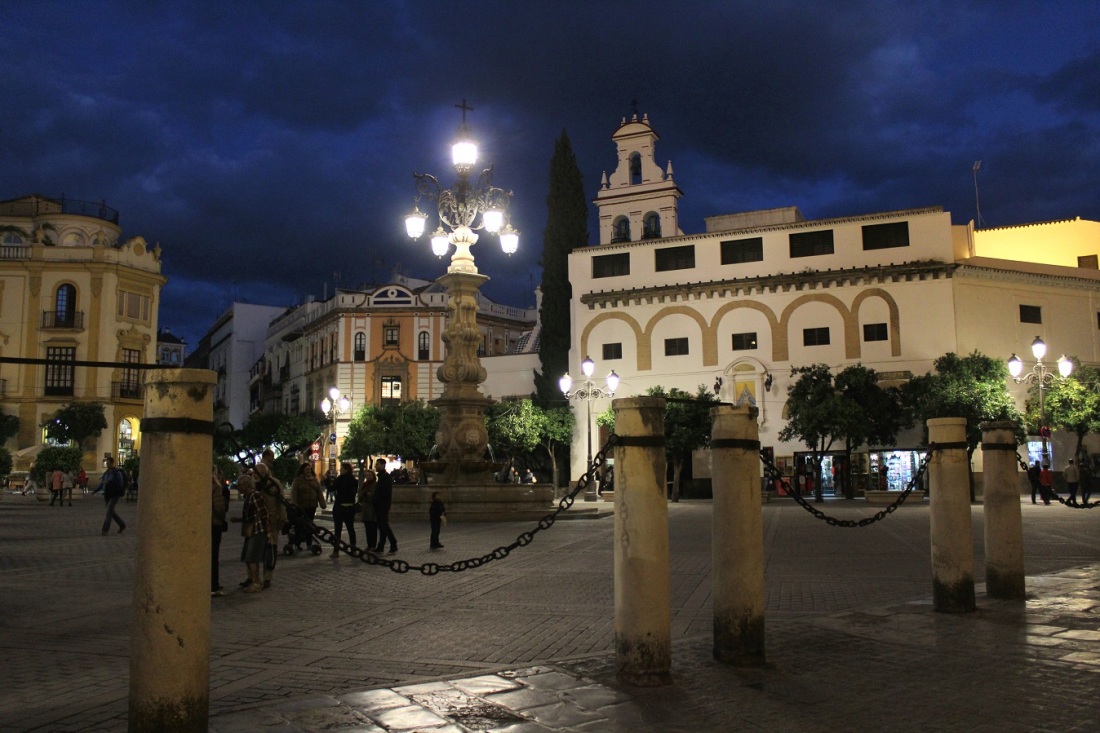 [The Giralda is the bell tower of the Cathedral of Seville.  Its height is 343 feet (105 m) and its square base is 23 feet (7.0 m) above sea level and 44 feet (13 m) long per side. The Giralda is the former minaret of the mosque that stood on the site under Muslim rule, and was built to resemble the minaret of the Koutoubia Mosque in Marrakech, Morocco.  It was converted into a bell tower for the cathedral after the Reconquista, although the topmost section dates from the Renaissance.  It was registered in 1987 as a World Heritage Site by UNESCO.  In the 16th century the belfry was added by the architect Hernan Ruiz the Younger; the statue on its top, called “El Giraldillo”, was installed in 1568 to represent the triumph of the Christian faith (Wikipedia).] 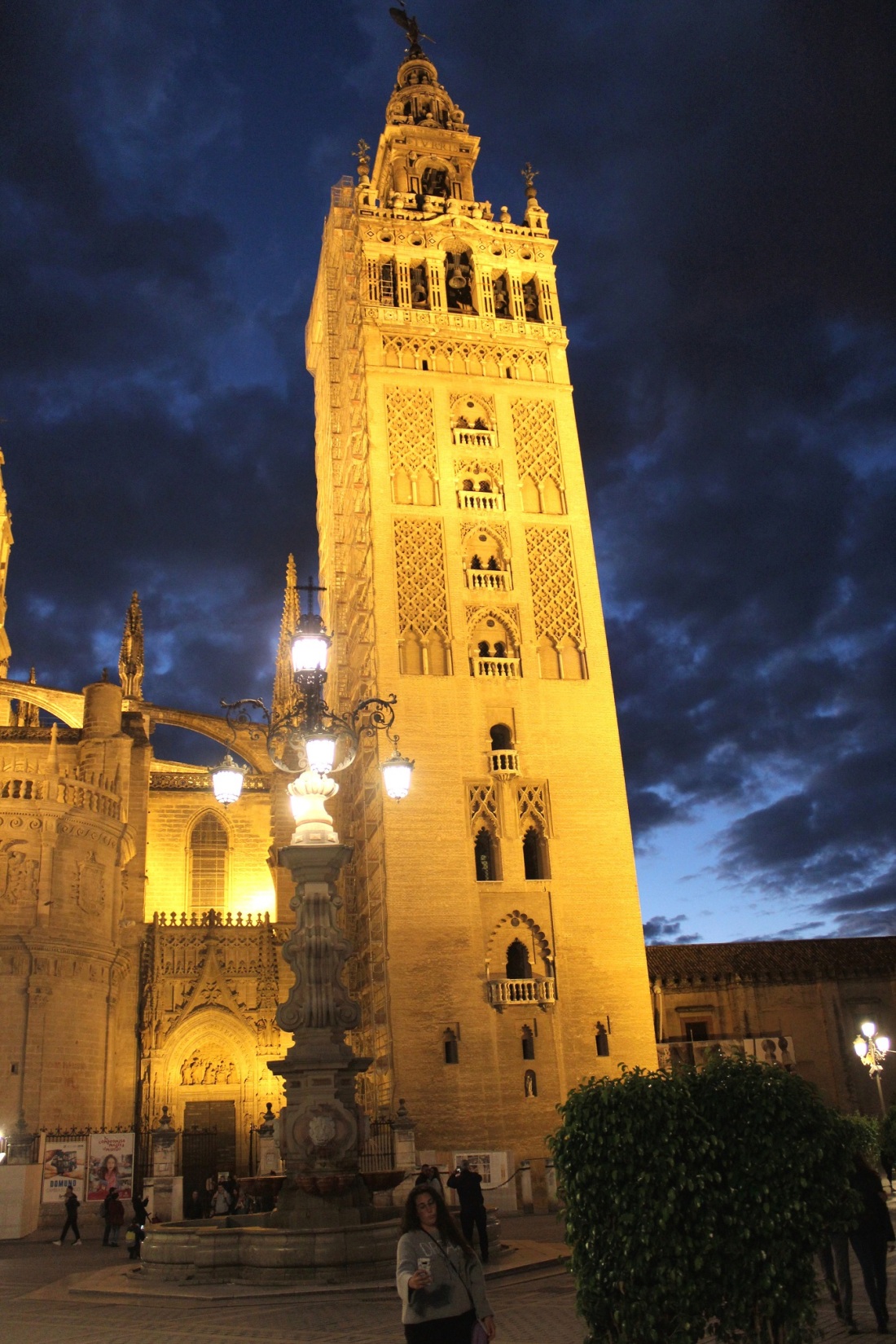 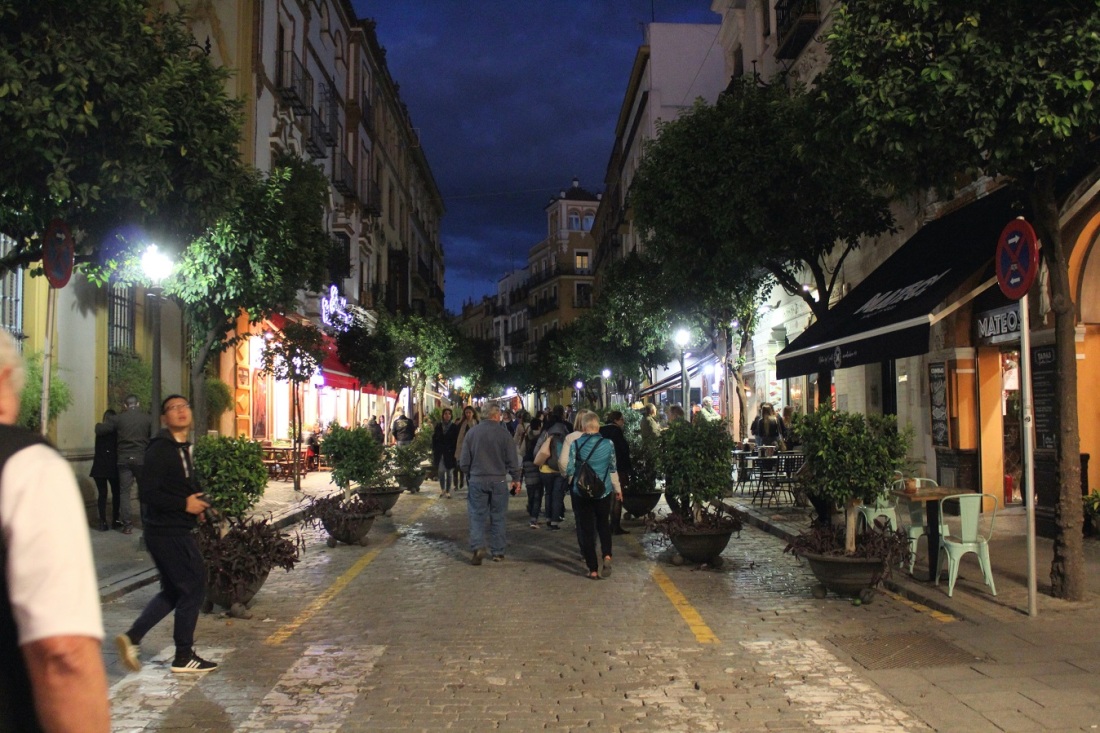 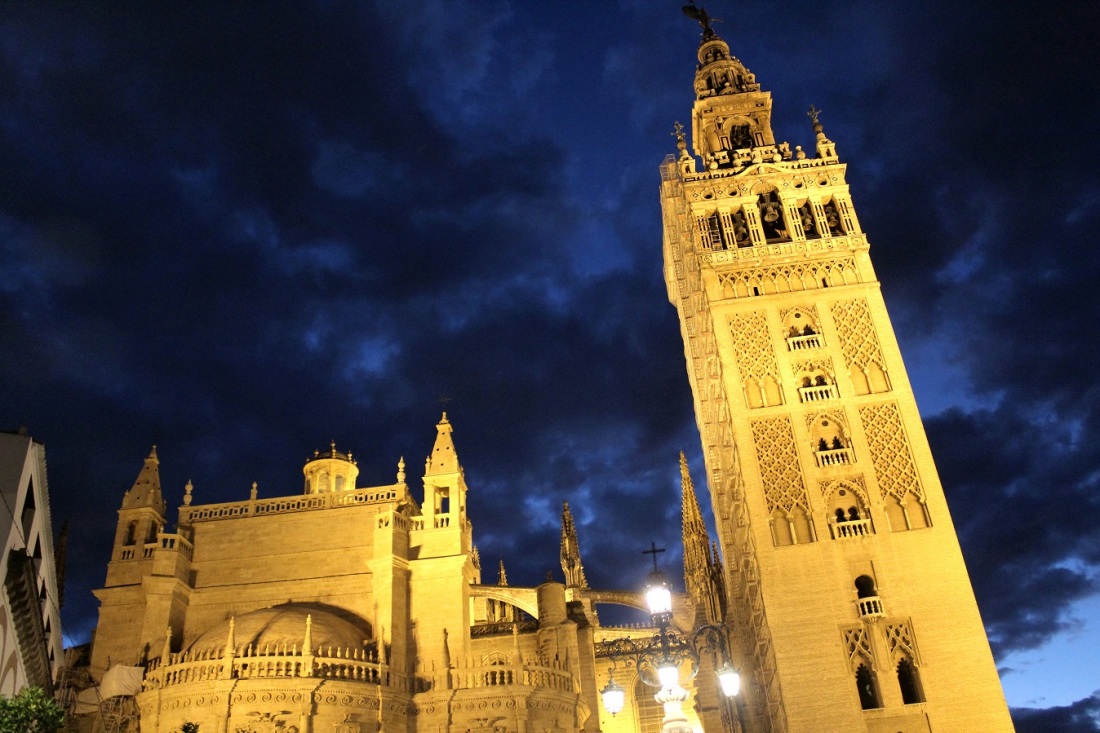 [On the morrow we will be venturing to the White Villages of Andalucia . . . ]

Whilst traveling through the Andes Mountains, we lost our corkscrew. Had to live on food and water for several days!  ~  W.C. Fields