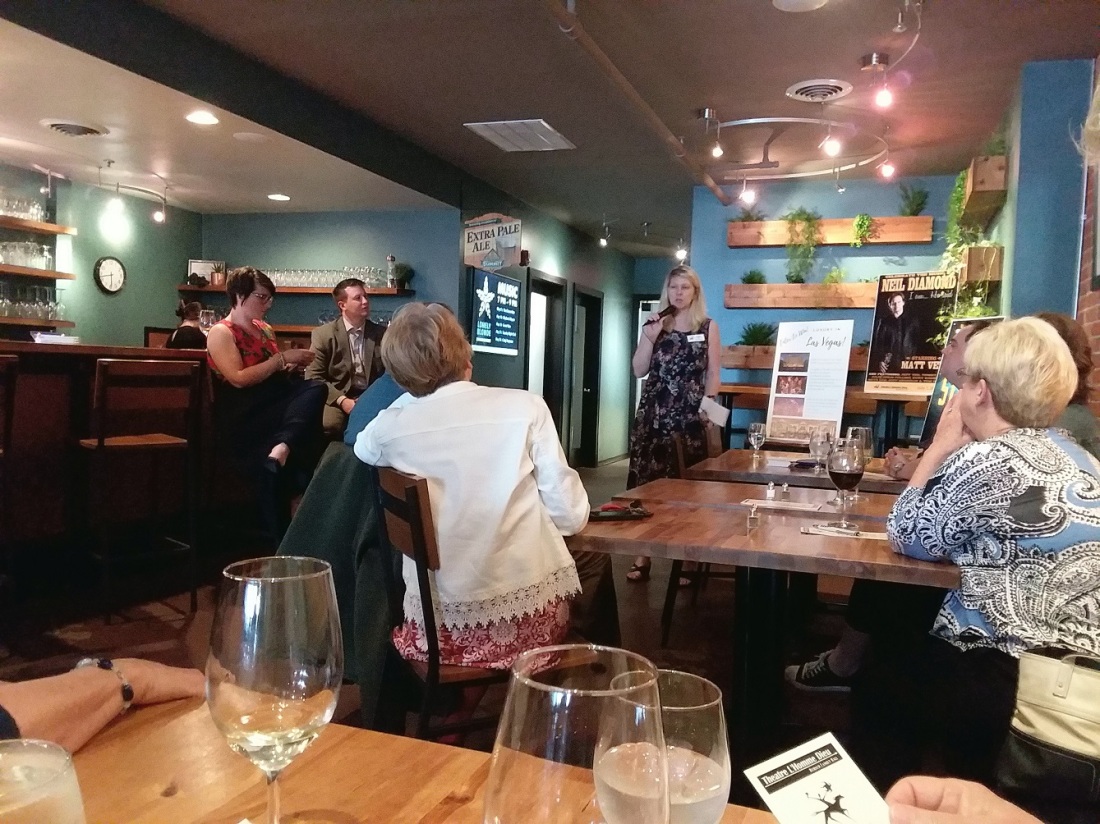 Wow!  Such a season upcoming!

[Sam Miltich is touring the state to discuss mental health with the aid of the Minnesota Heritage Arts & Culture Fund.  On this night in the neighboring town of Evansville, he      was joined by Dave Karr (89 years old and going strong) on sax, Nathan Norman on drums, and Chris Bates on bass to celebrate the jazz of Thelonious Monk and . . . himself. I took some not very good photos, likely because I was overwhelmed by the great music. Oh, and Sam’s dad, Matthew (he also plays bass with Sam but on this trip was strictly the chauffeur), joined in once with a vocal of “Corcovado” – terrific!] 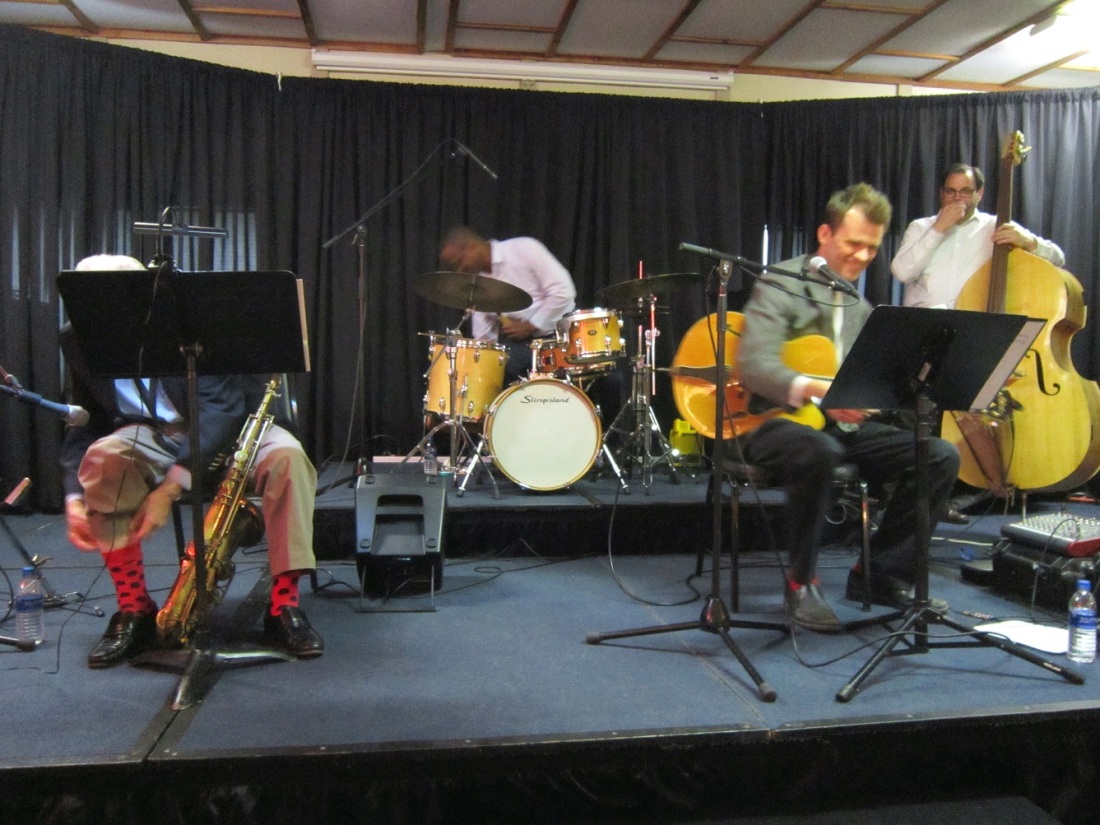 [The Super bought two of Sam’s CD’s, got them autographed, and we’re listening to them even as we speak.  We went to see Sam’s Uncle Anthony at the winery the next day – quite a musical family!]

[And here is the aforementioned Anthony Miltich at Carlos Creek Winery as the Super walks by followed by Dave with his wine pick up . . . ]

[Dave with his aforementioned wine pick up . . . ] 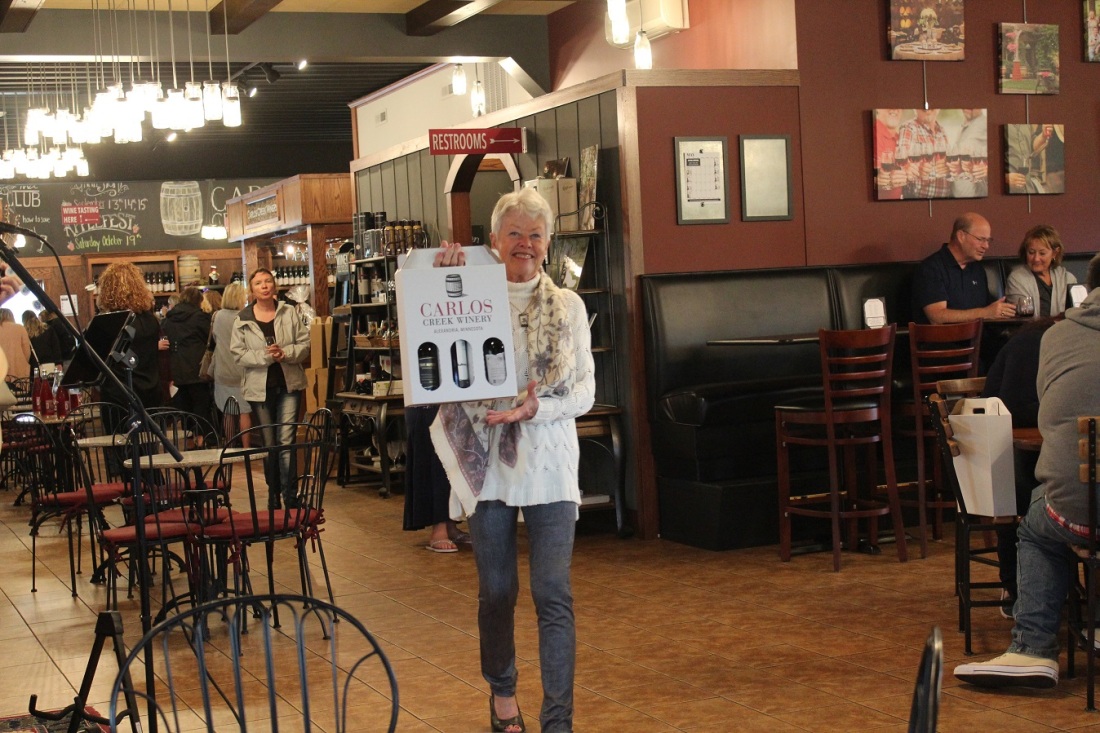 [Here getting photobombed by Anthony . . . ]

[Unfortunately we could only spend a couple of hours with Anthony on this day, for we were next off to . . . ]

[After Paul & I parked, the Super and Deb were already in place for fine dining at . . . ] 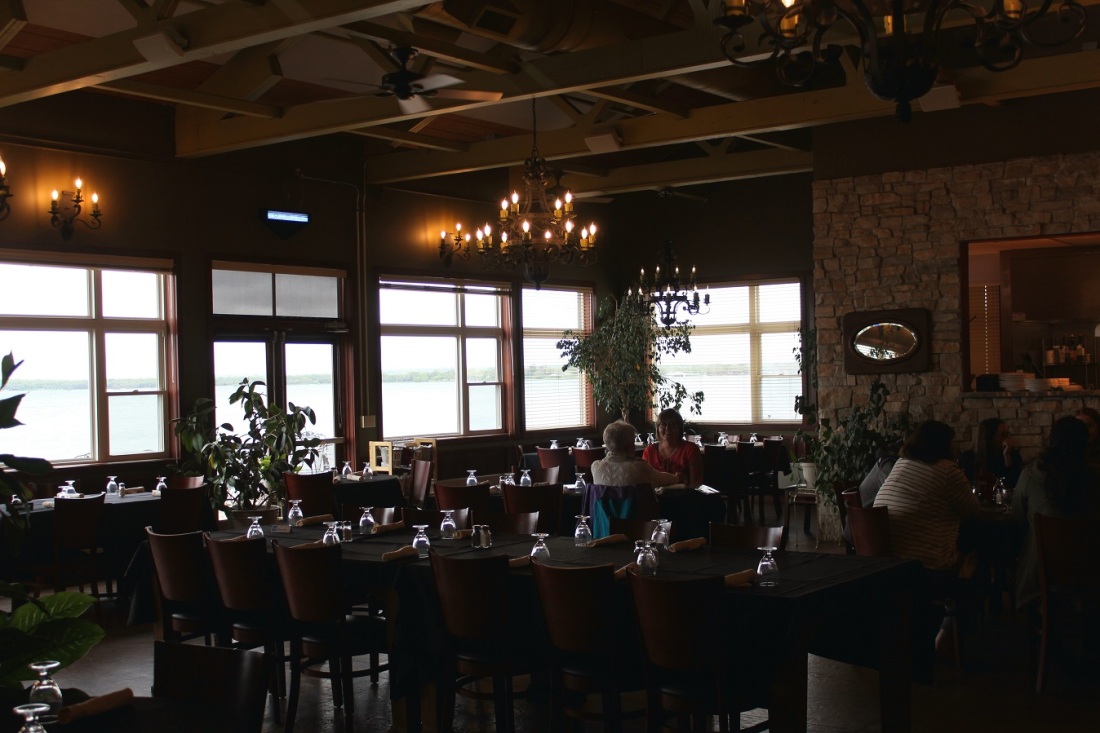 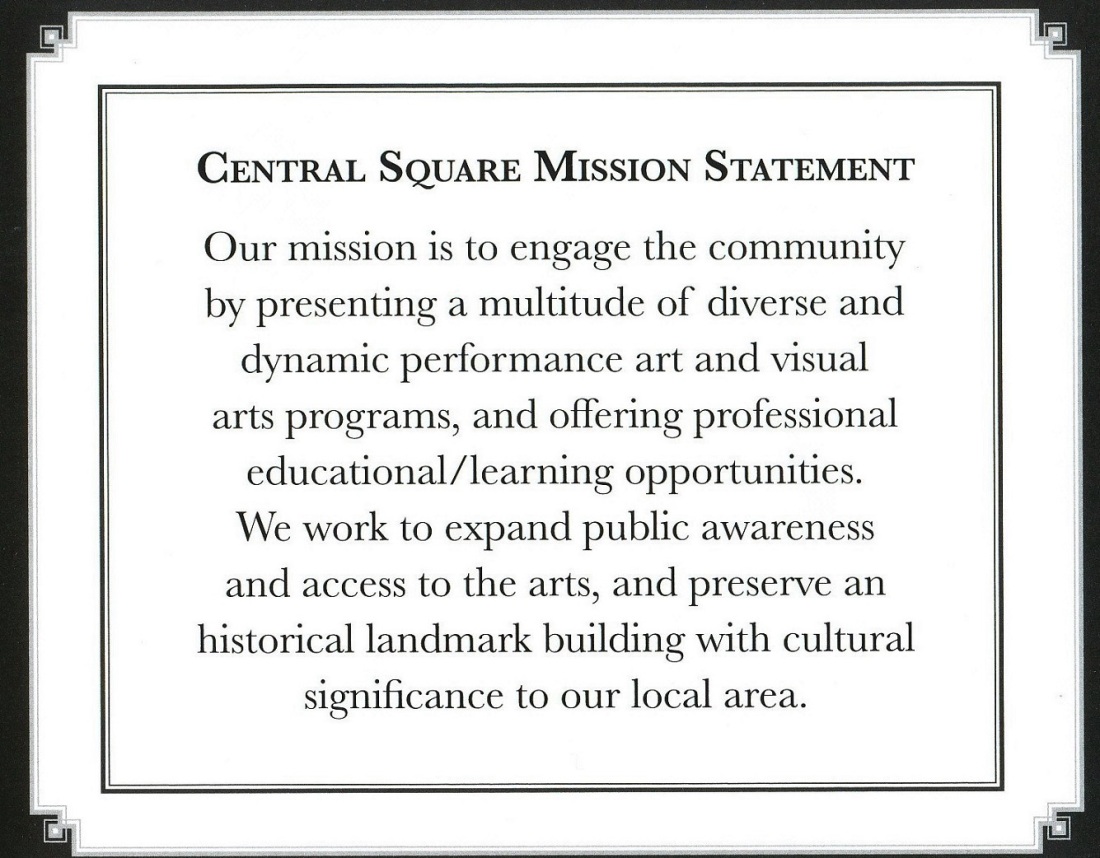 [We were there for our old friends, Julie Patchouli and Bruce Hecksel.  In 2018 Patchouli & Terra Guitarra went global bringing their music all over the world touring the UK and Europe, China and the U.S.  In 2019 their album Spirit Wheel was nominated ZMR “Best World Album”.  The duo contines to tour across the U.S. and returns for a 2nd bigger tour in China in July of 2019.  Patchouli & Terra Guitarra have performed over 4,500 shows, toured a million miles on the road supporting 21 CD releases, performed on TV, film and are played on radio programs around the World (patchouli.net). 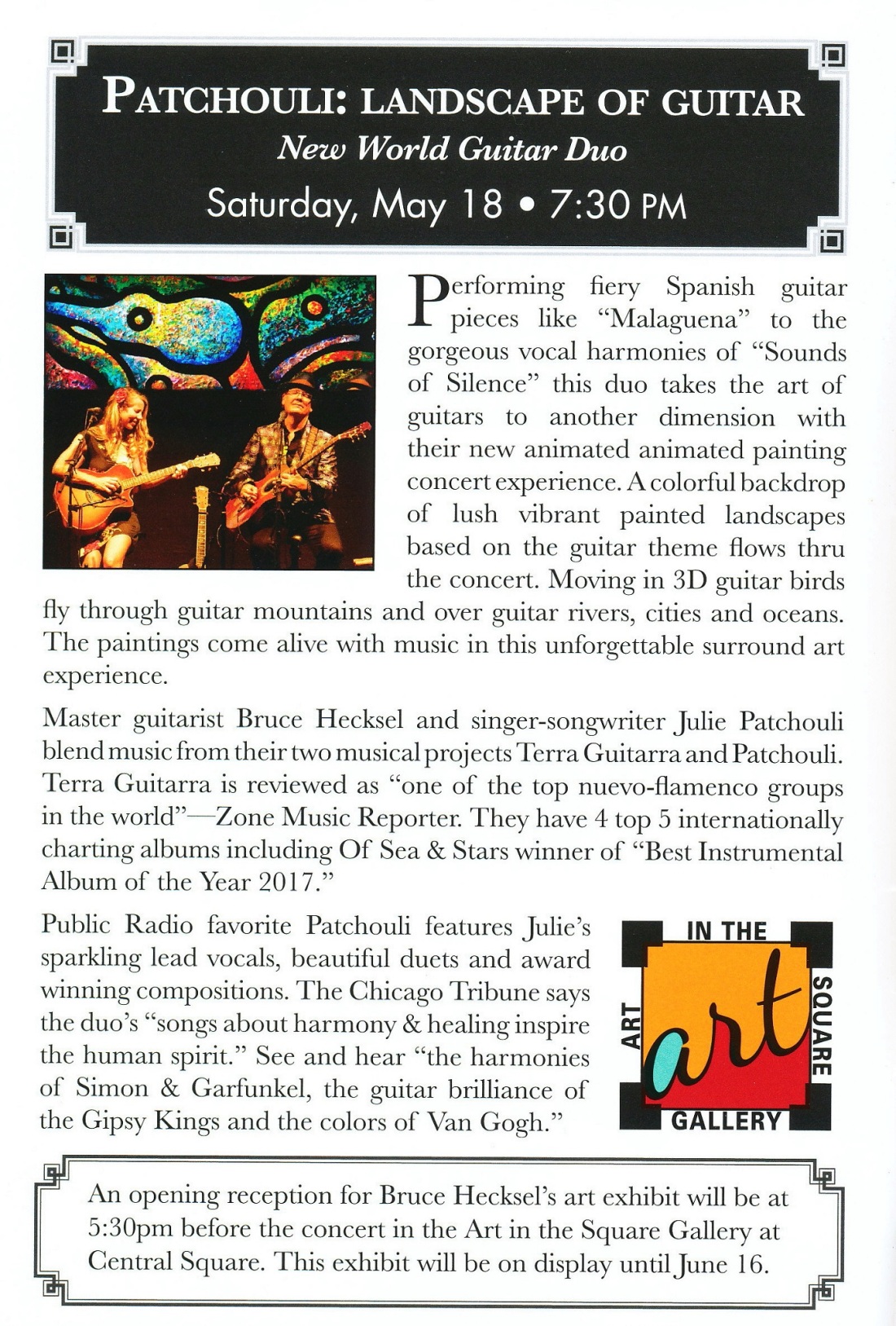 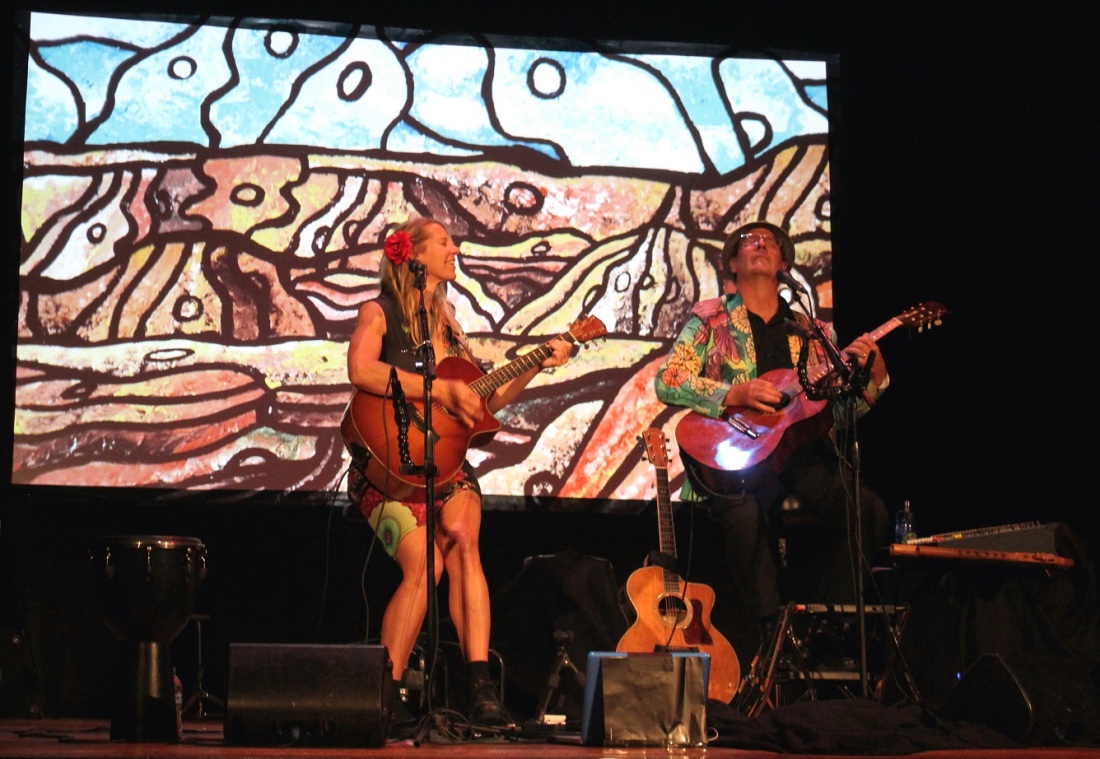 [Intermission, at what I guess was surprisingly our first visit to Central Square . . . ]

[Of course, always having fun with their audience . . . ] 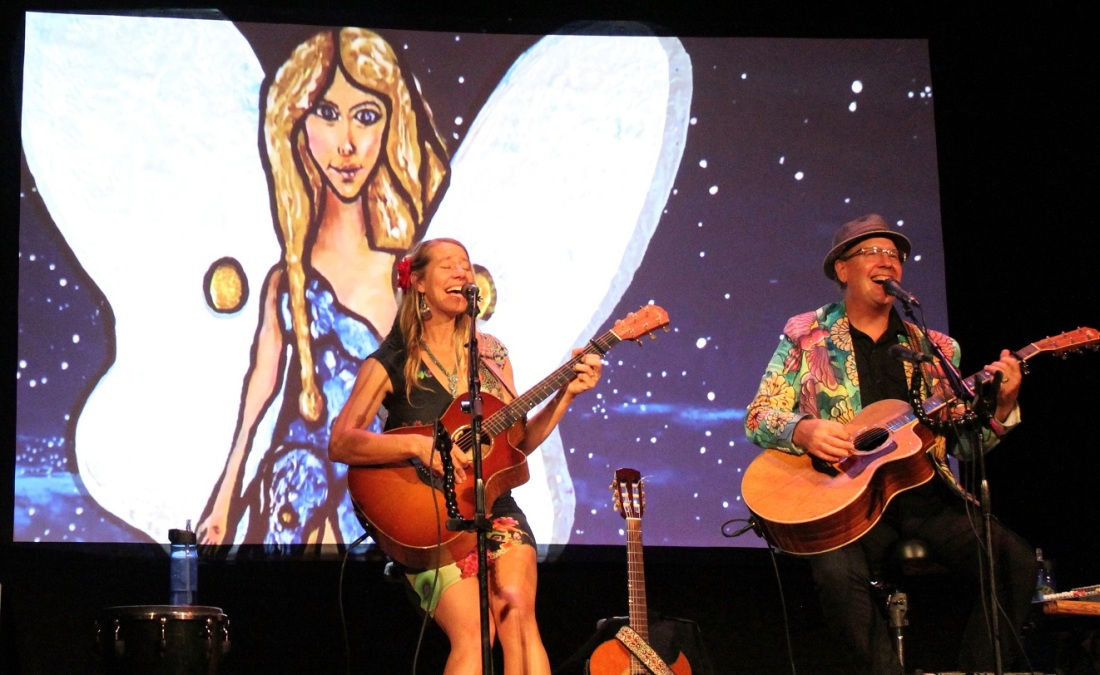 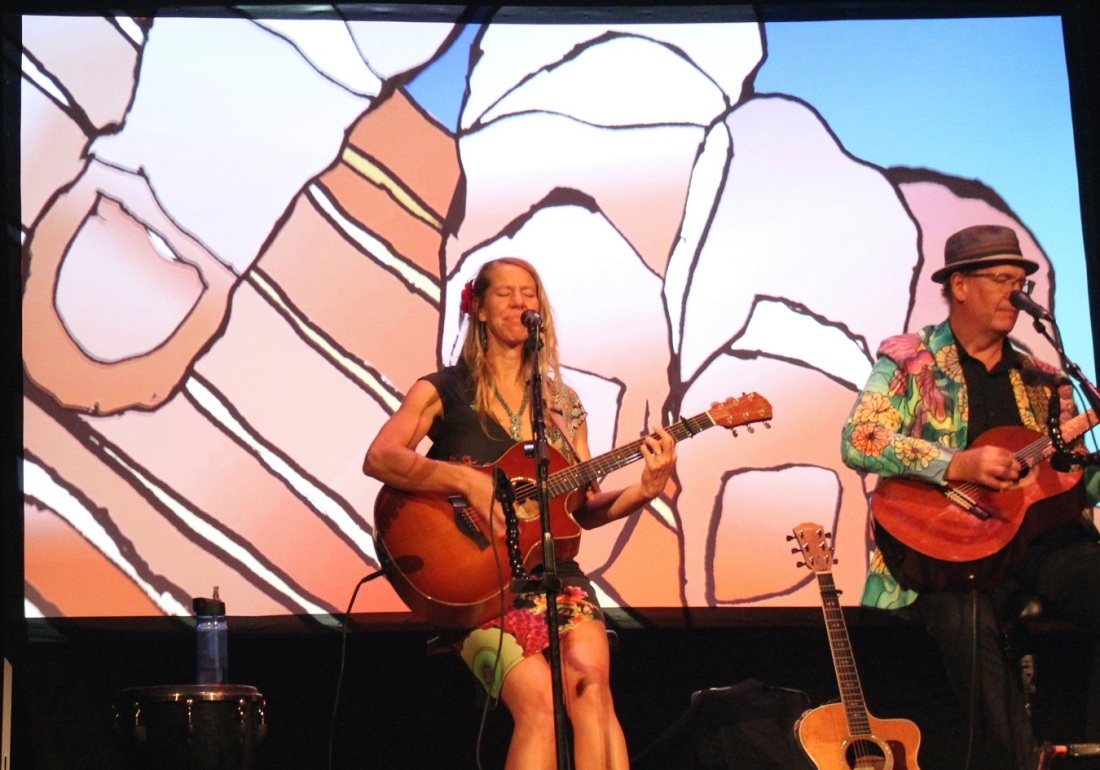 [During which the backdrop was animated guitar playing fingers . . . ]

[From the Central Square program, I noted that we “know” one of the pictured performers with the upcoming Rochester Symphony (1st two photos).  Well, Karen K. Hansen was a guest lecturer on our Viking Panama Cruise a year and a half ago (the remaining photos).  Oh, and her husband Bill Gurstelle was also a guest lecturer – about catapults.] 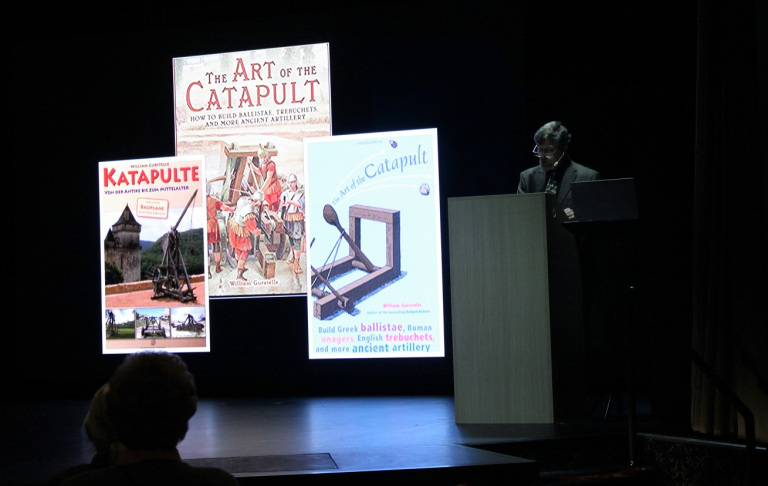 [Thanks to the Trumms for driving us to and from Glenwood – in the dark, in the rain.  We thus survived to make the wine pick up party the next day at Carlos Creek Winery.]

[Entertainment (yes, a concert) was provided by a jazz quartet from the University of Minnesota Morris . . . ] 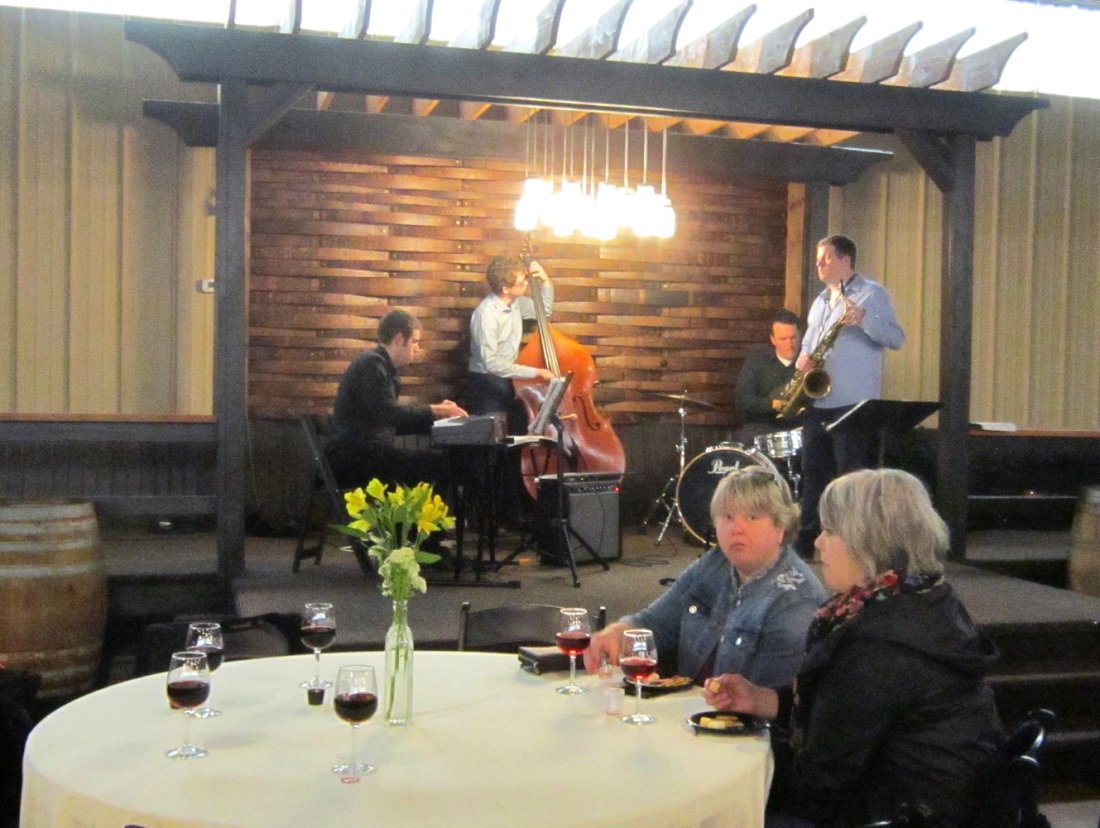 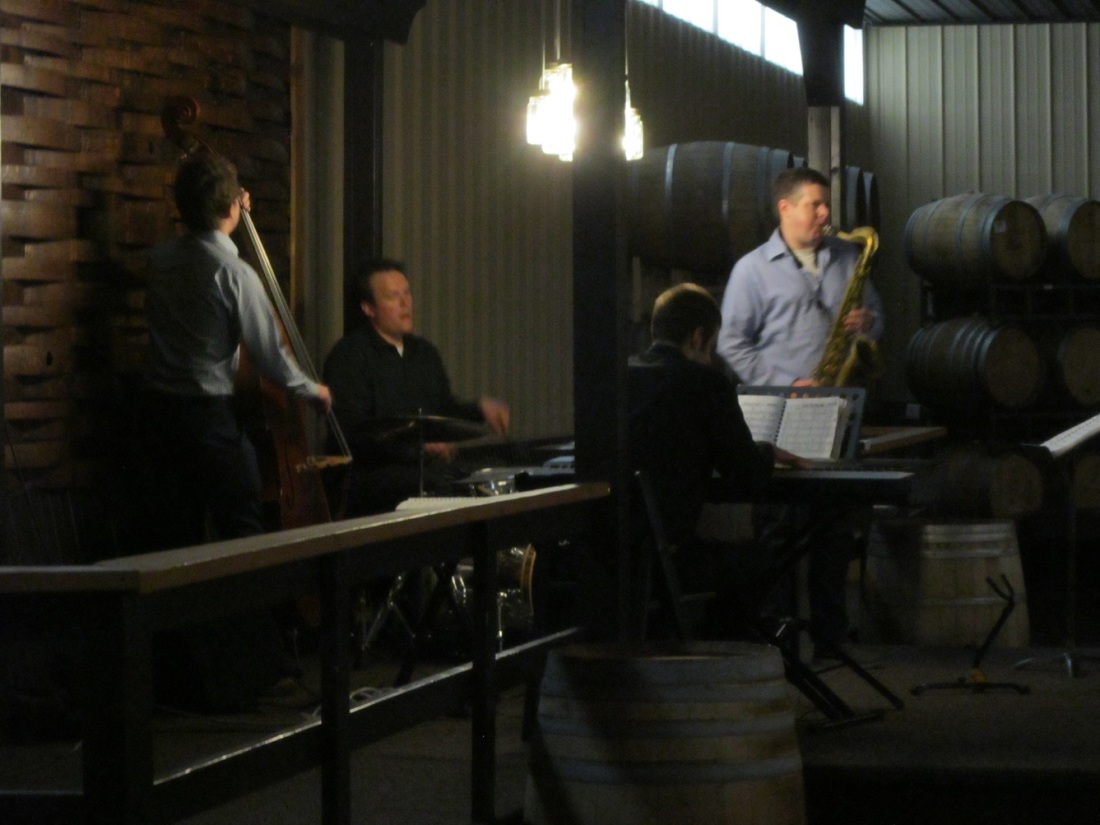 [And then it was off to the Performing Arts Center at Alexandria Area High School . . . ] 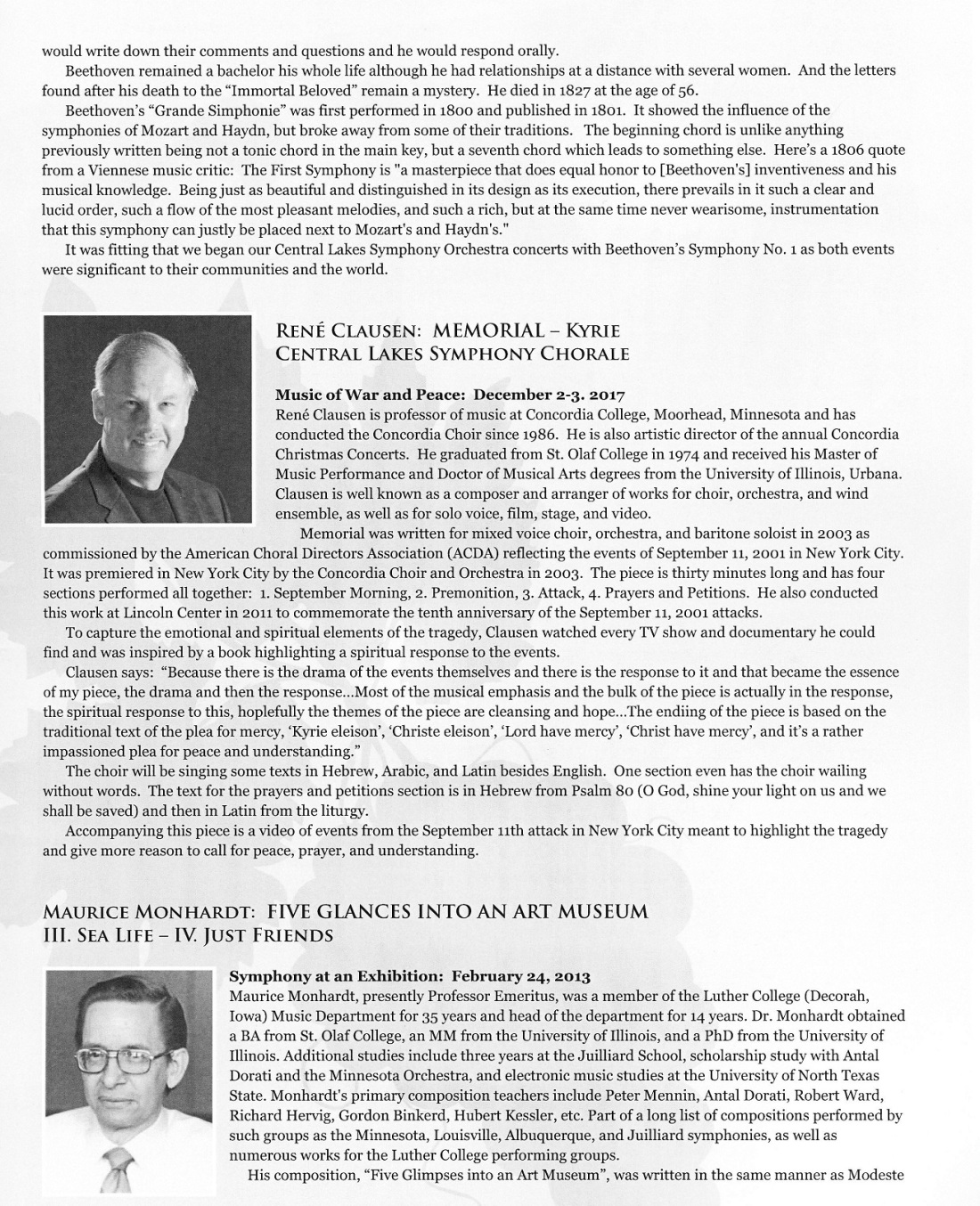 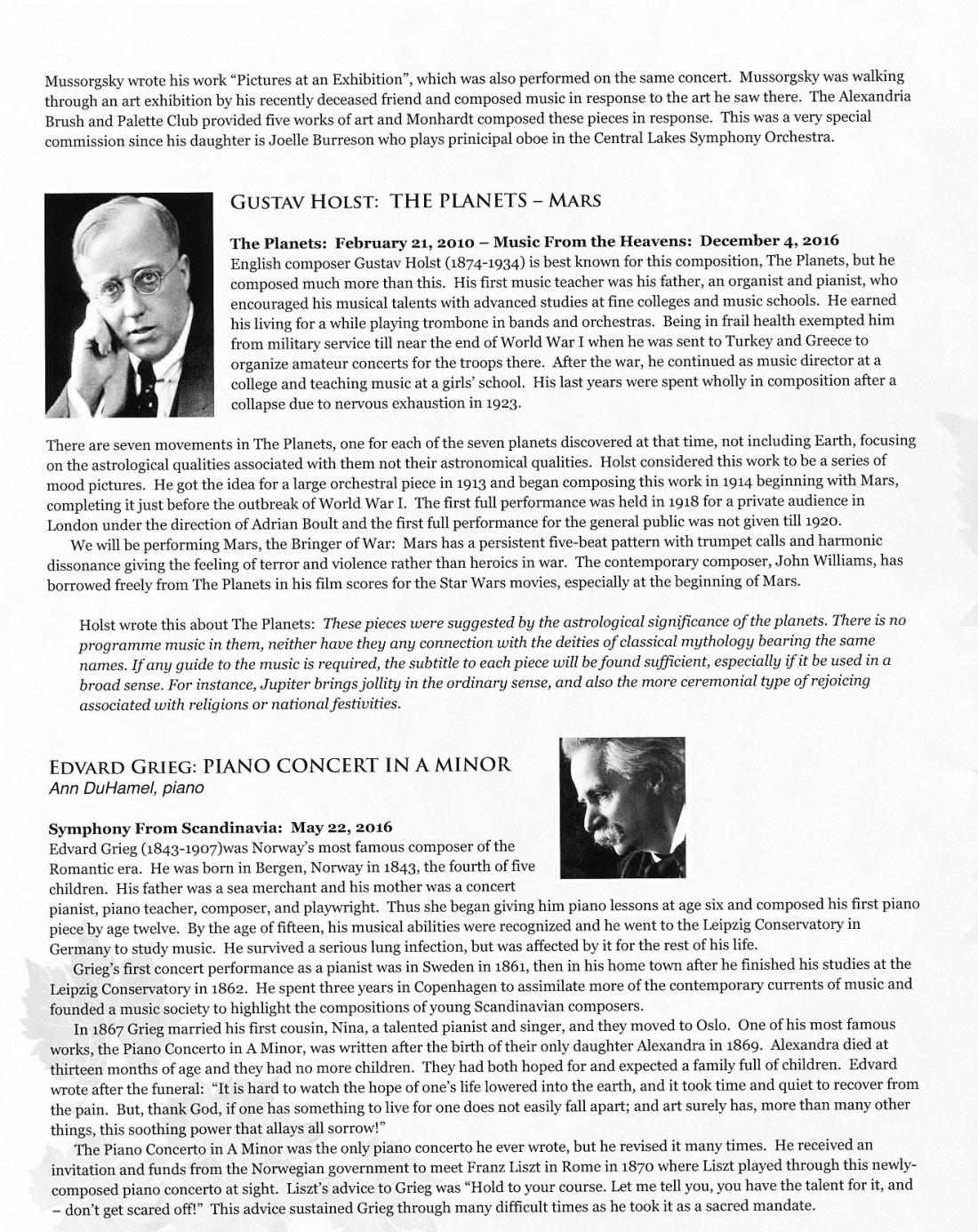 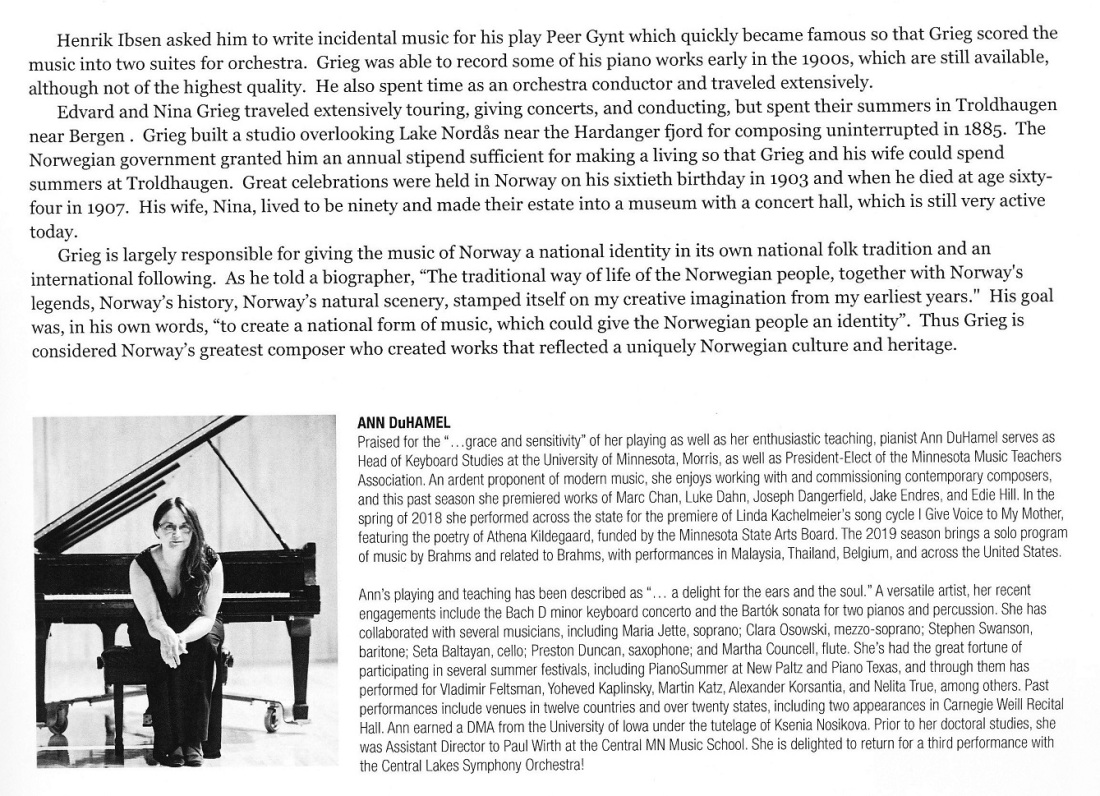 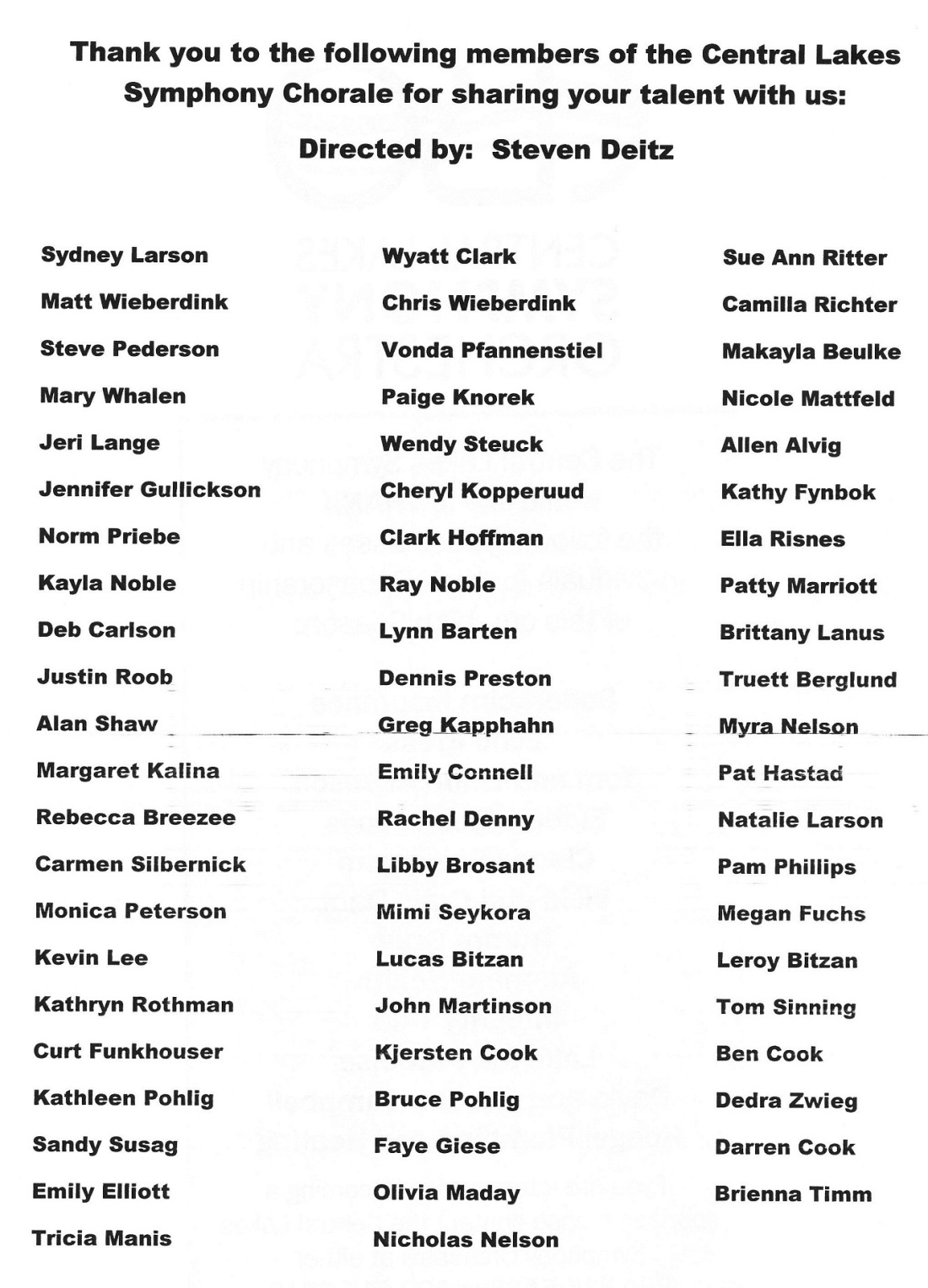 [This was the grand finale of CLSO’s 10th season.  It was destined to be a blockbuster.  Joined in this effort by a 70-member Central Lakes Symphony Chorale. The audience was blown away by such as “Mars, the Bringer of War,” “O Fortune,” “Star Wars,” and “Allegro Molto Moderator.” Crank up the volume!] 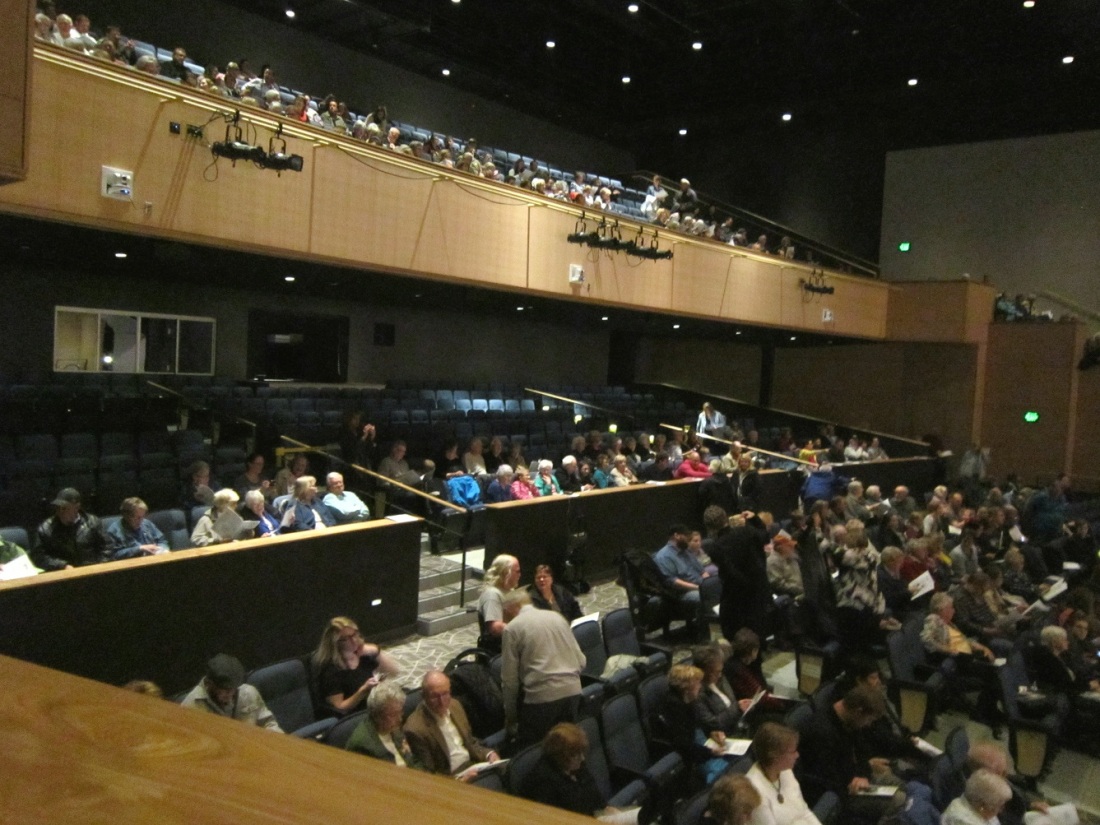 [Maestro Brad Lambrecht begins each concert with maestro’s notes an hour beforehand.  He discusses each song and composer . . . ] 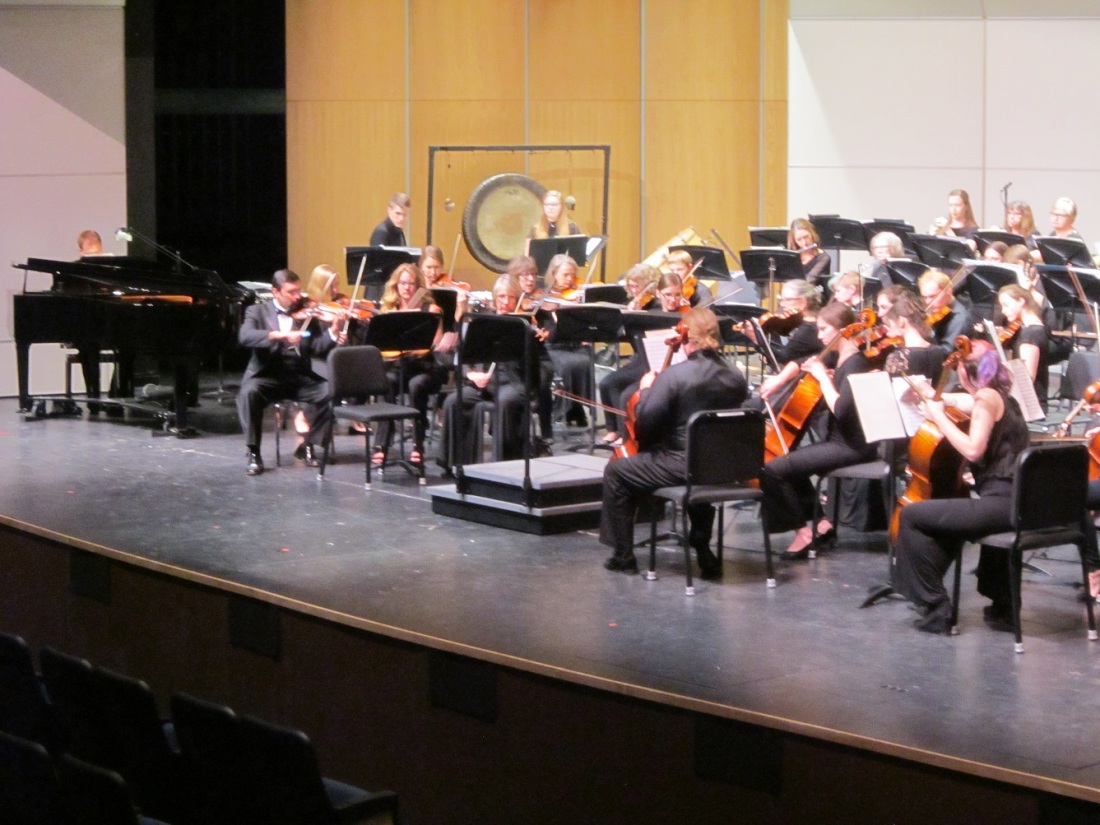 [The audience settles in – it appeared to be the best ever for the symphony . . . ] 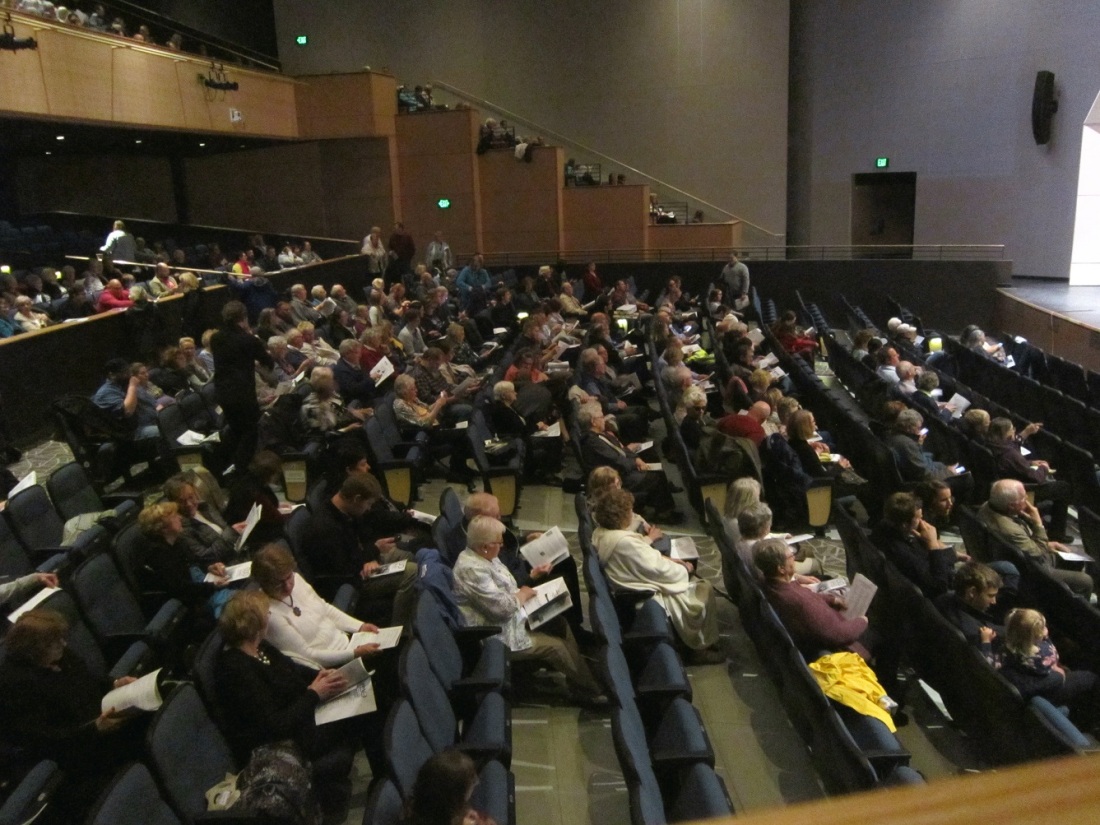 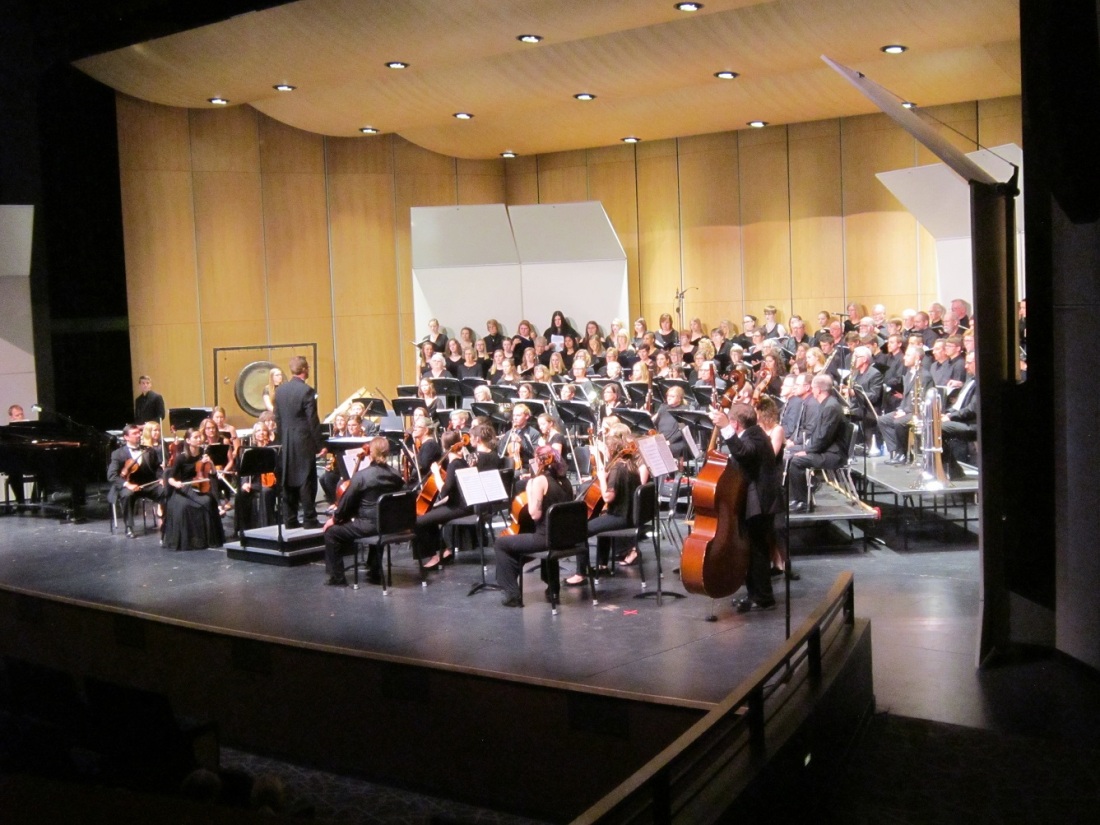 Just for fun, a sample video of one of the songs performed (and yes, our orchestra sounded just like this) . . .

[Later joined by symphony alumni.  As CLSO president Greg Donahue has said, the goal is to fill the stage with musicians so they’re always looking to add new members, especially strings . . . ]

Just for fun, a sample of a previous CLSO performance . . .

[Sneaking a shot through the piano of President Greg with his violin . . . ]

[Ann received flowers but it’s hard to focus on movement from distance . . . ] 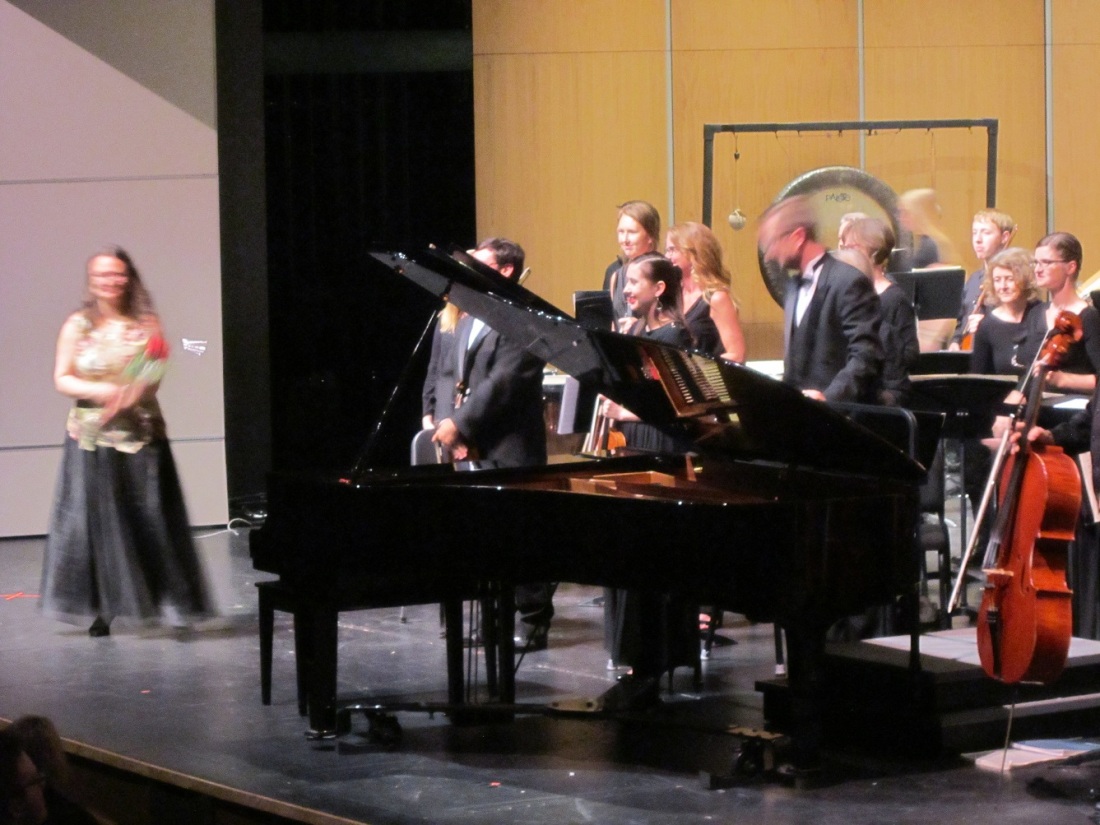 [And with the alumni musicians and chorale, the sound engulfed the auditorium . . . ]

[The audience recovered after “O Fortune” to give a standing ovation.  After which Brad high-fived the musicians and skipped off the stage . . . ]

And for your summer dining and dancing pleasure . . . 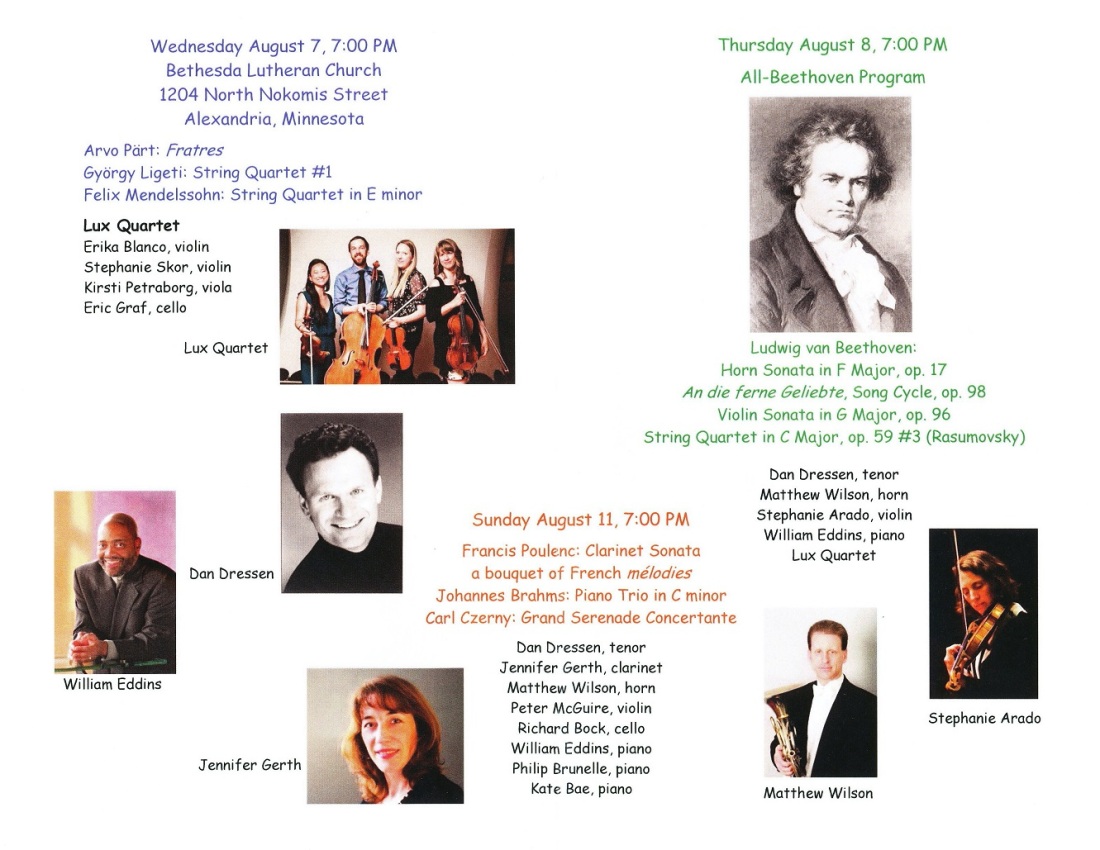 To achieve great things, two things are needed: a plan and not quite enough time.  ~  Leonard Bernstein

Up Next:  Back to Okinawa