No matter where you live, sometimes you just have to go to town.  For the GI’s in Sukiran, “town” was either Koza (now Okinawa City), 6 miles north of where we were stationed in Futema, or Naha, the capital of the Ryukyu Islands, 7 1/2 miles south of Futema . . . 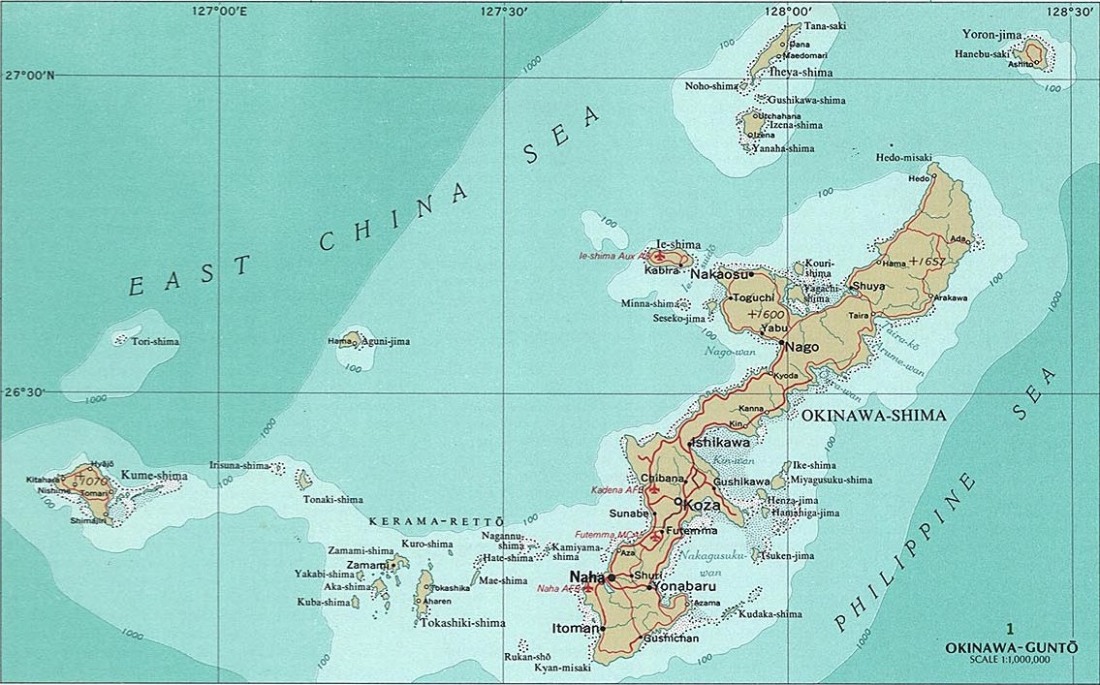 [Okinawa [nee Koza] is the second-largest city in Okinawa, following Naha, the capital city. It is located in the central part of the island, about 20 kilometres (12 mi) north of Naha.  As of December 2012, the city has an estimated population of 138,431 and a total area of  49.00 km².  The city of Okinawa was the site of the Koza riot on the night of December 20, 1970 [yes, I was there then but all were confined to base].  Roughly 5,000 Okinawans came into violent contact with roughly 700 American MPs.  Approximately 60 Americans were injured and 75 cars were burned.  The Koza riot was considered a symbol of Okinawan anger after 25 years of US military occupation. The riot was unexpected, and strained the ongoing negotiations on the end of the United States administration of Okinawa.  The city of Okinawa was founded on April 1, 1974 with the merger of Koza and Misato (Wikipedia)].

[Of course the above photo could be from Division Street in St. Cloud, but the sign below shows where we actually were in relation to the rest of the world . . . ]

[The strip through Koza.  On the left is the Mikimoto Pearls store.  Lest you did not know Mikimoto discovered the way to make consistent cultured pearls – as an irritant for the oysters, he inserted shell fragments from Mississippi River clams.  Amazing, eh?  I went back to Japan’s main islands about 10 years later and bought a Mikimoto single pearl necklace for the significant ladies of my life . . . ]

[“The Rievers” with Steve McQueen was a current flick at the time so Okinawa was getting first run movies.  This and following photos from on high are from the rooftop of the East & West Gift Shop . . . ] 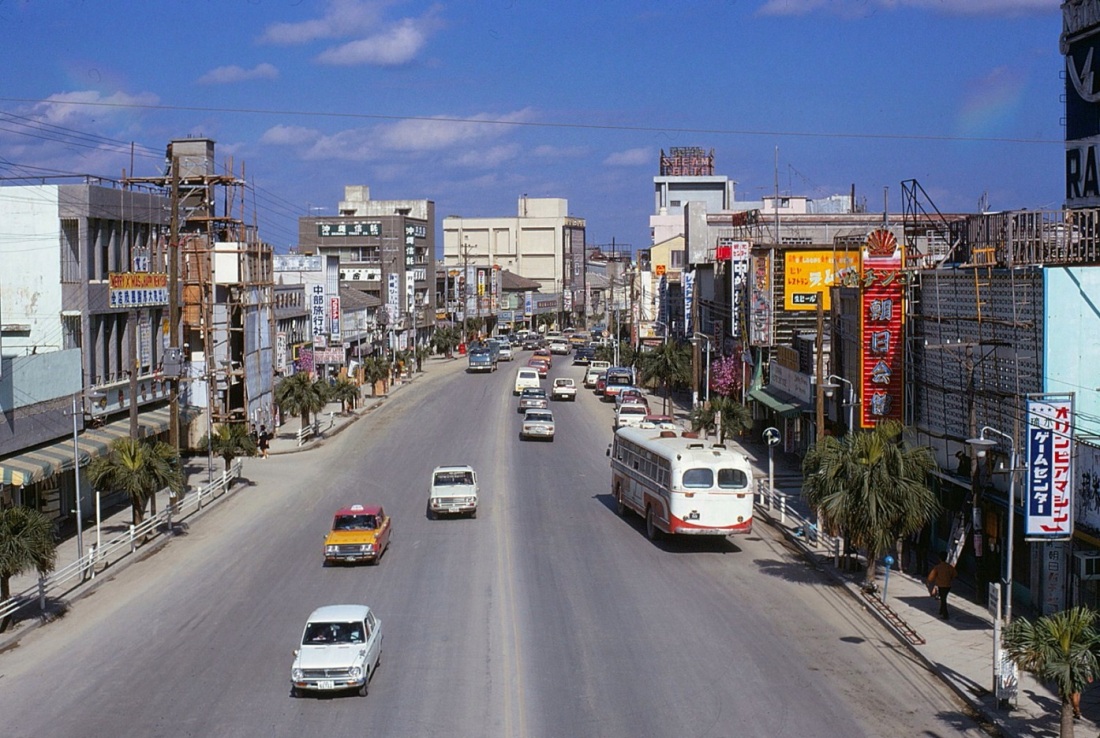 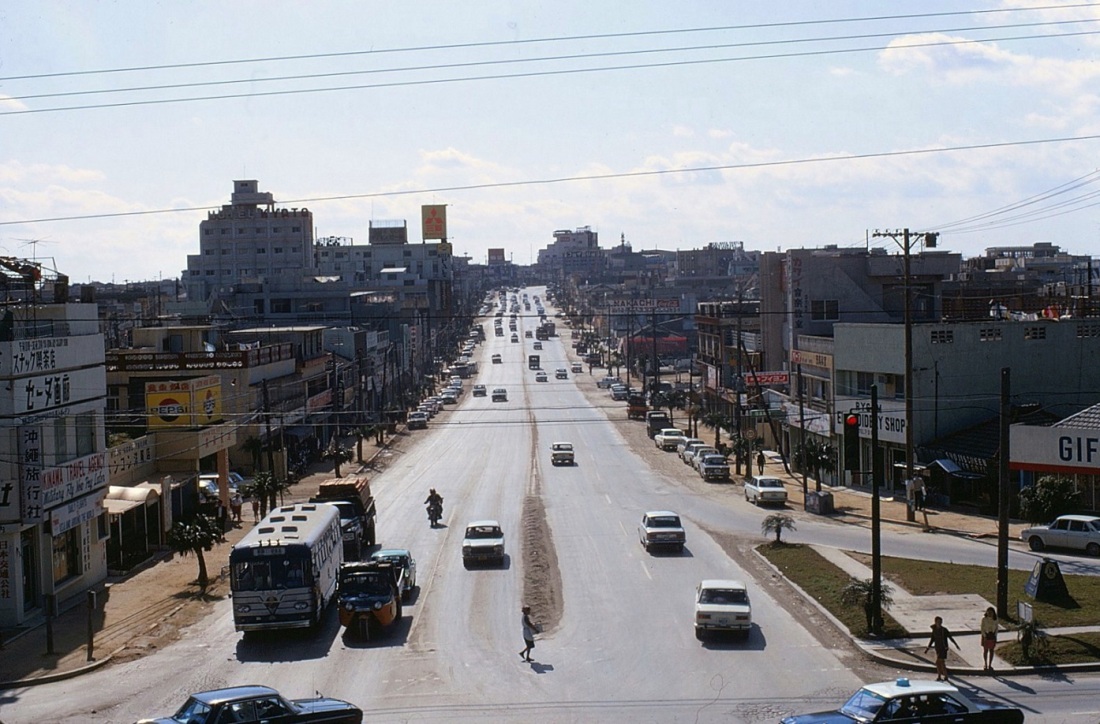 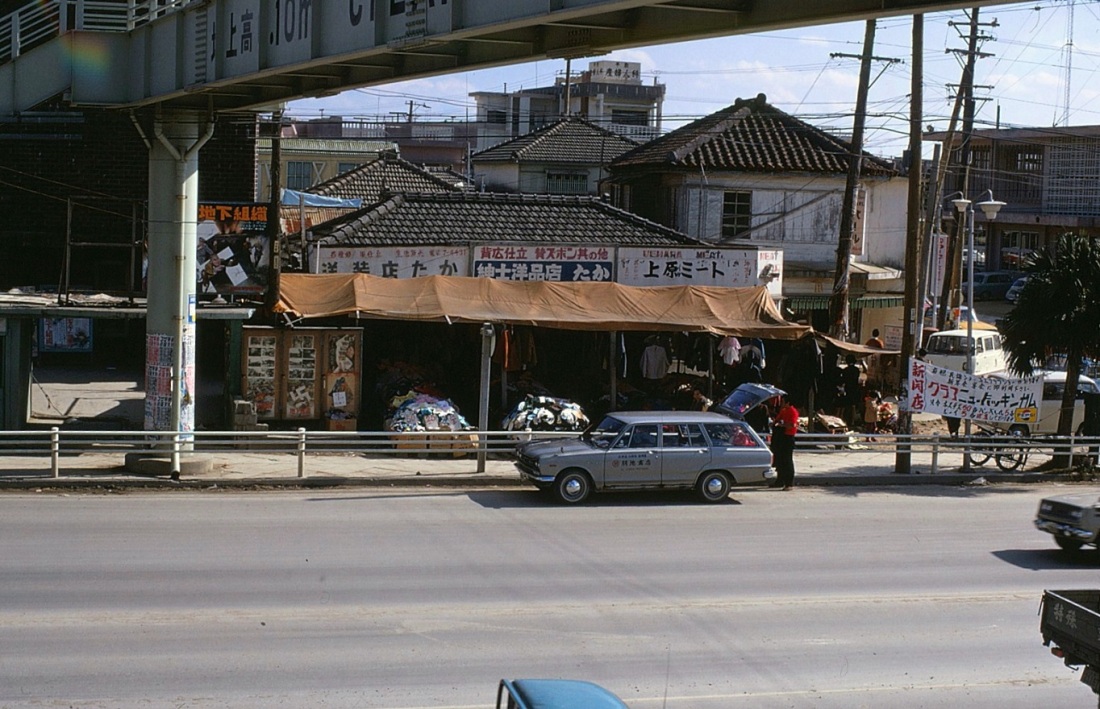 [And the mighty East & West Gift Shop, from whence all the overhead shots were taken in this and other postings . . . ]

[If you remember old Las Vegas, you should remember the Dunes Hotel marquee covered here mid-photo . . . ] 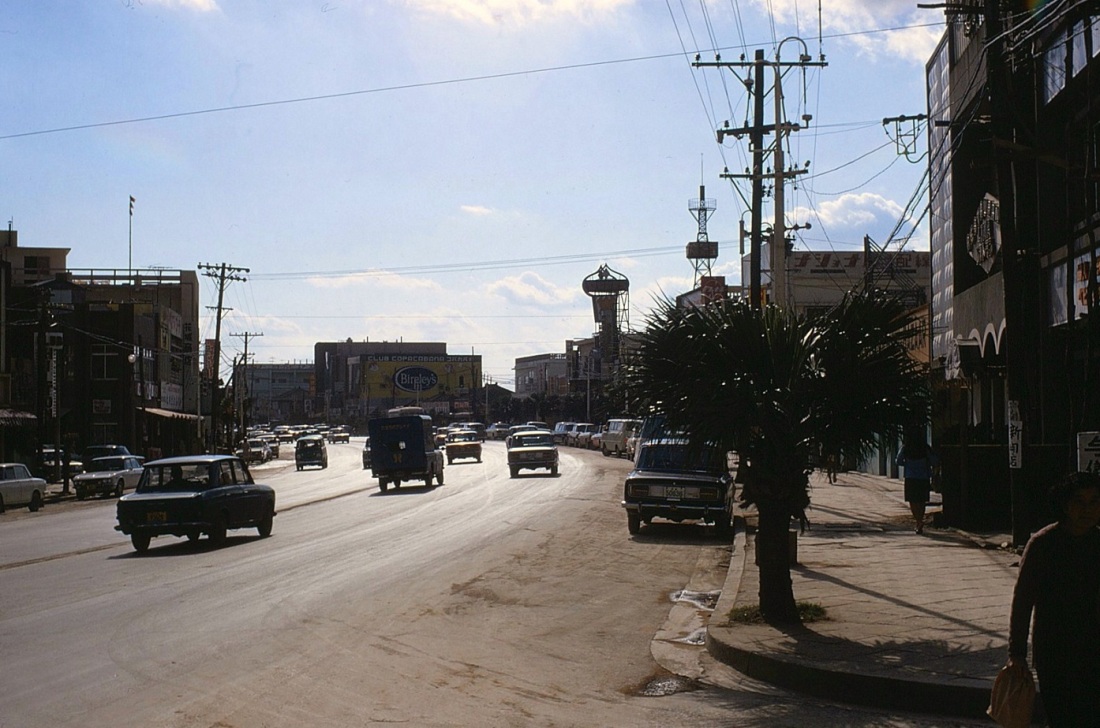 [Long before the bridge to nowhere, we had the highway to nowhere.  We are now in Naha. Naha, Naha-shi, is the capital city of the Okinawa Prefecture, the southernmost prefecture in Japan.  As of December 2012, the city has an estimated population of 321,467 and a total area of 38.99 km².  The modern city was officially founded on May 20, 1921.  Before that, Naha had been for centuries one of the most important and populous sites in Okinawa.  Naha is the political, economic and education center of Okinawa Prefecture. In the medieval and early modern periods, it was the commercial center of the Ryukyu Kingdom (Wikipedia).] 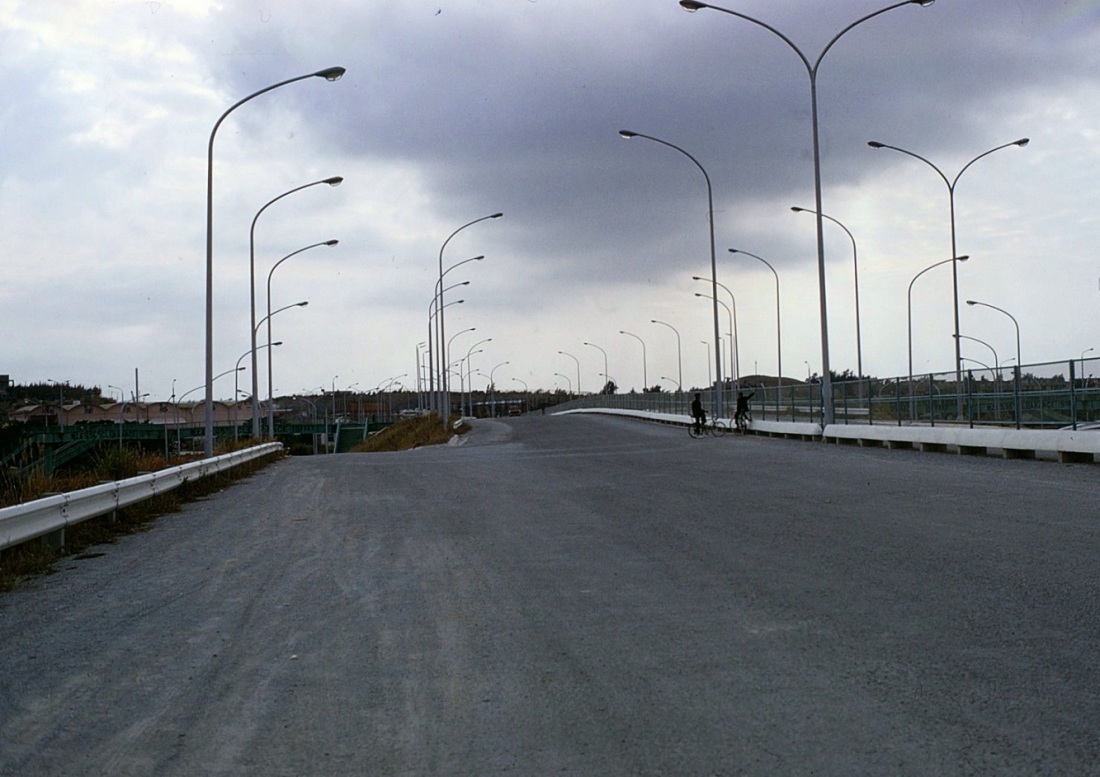 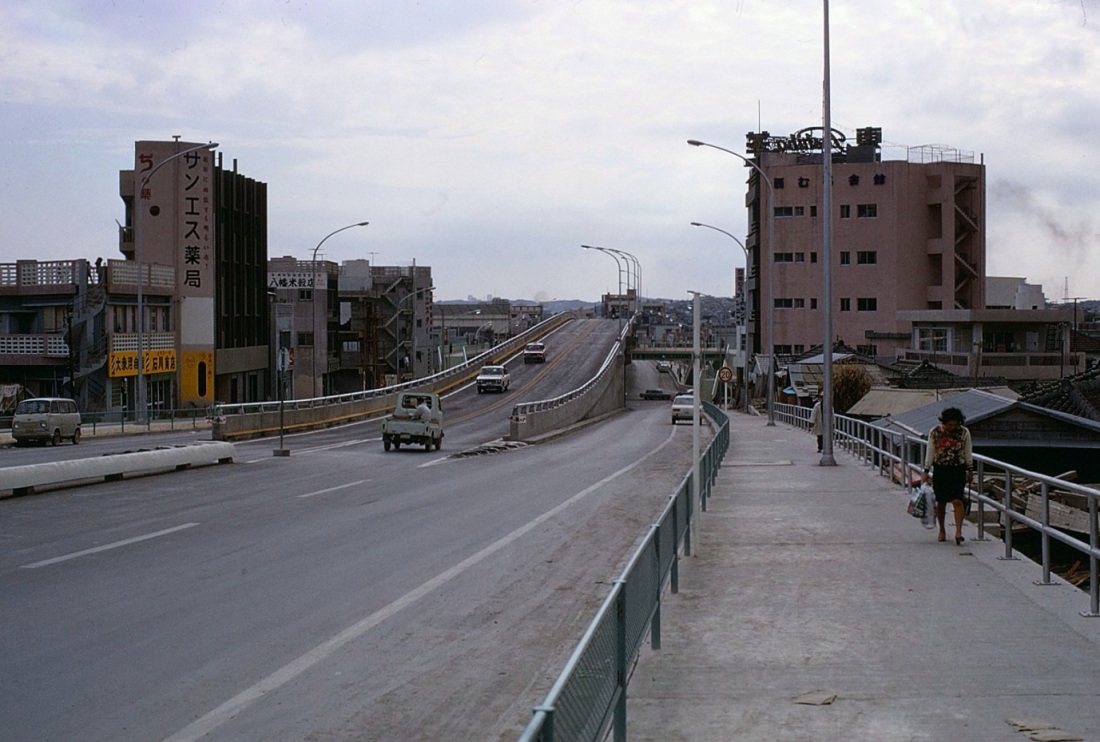 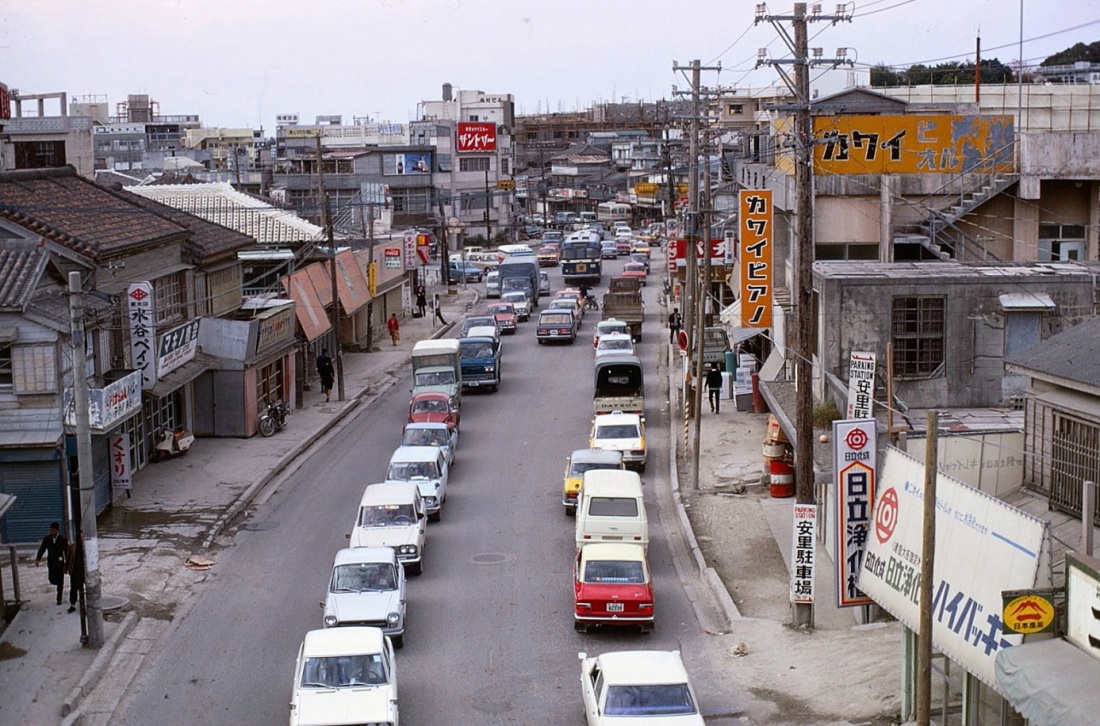 [If you’re looking to rekindle your passion for Major League Baseball, the answer may be 6,000 miles away in beautiful Japan, where Nippon Professional Baseball, the country’s highest level of pro ball, will have you viewing America’s pastime in a whole new light. I started my journey in Tokyo, setting out for Jingu Stadium, less than half an hour by train from Shinjuku Station. (English is used throughout Tokyo’s transit system, making travel a breeze.)  Perhaps most surprising: Japanese baseball fans did not stare at their smartphones during the game or mill about the stadium looking for distractions.  A particularly enthusiastic young boy next to me remained seated for all nine innings, cheering, singing and even offering me a few of his squid snacks. There was no booing or yelling at the umpires — even when a call was reversed against the home team — and the crowd roared in delight when a batter laid down a perfect sacrifice bunt.  ~  Gregory Leporati, LA Times, 2-14-19]

[As the sign notes, obviously a destination site.  I don’t recall ever going in?] 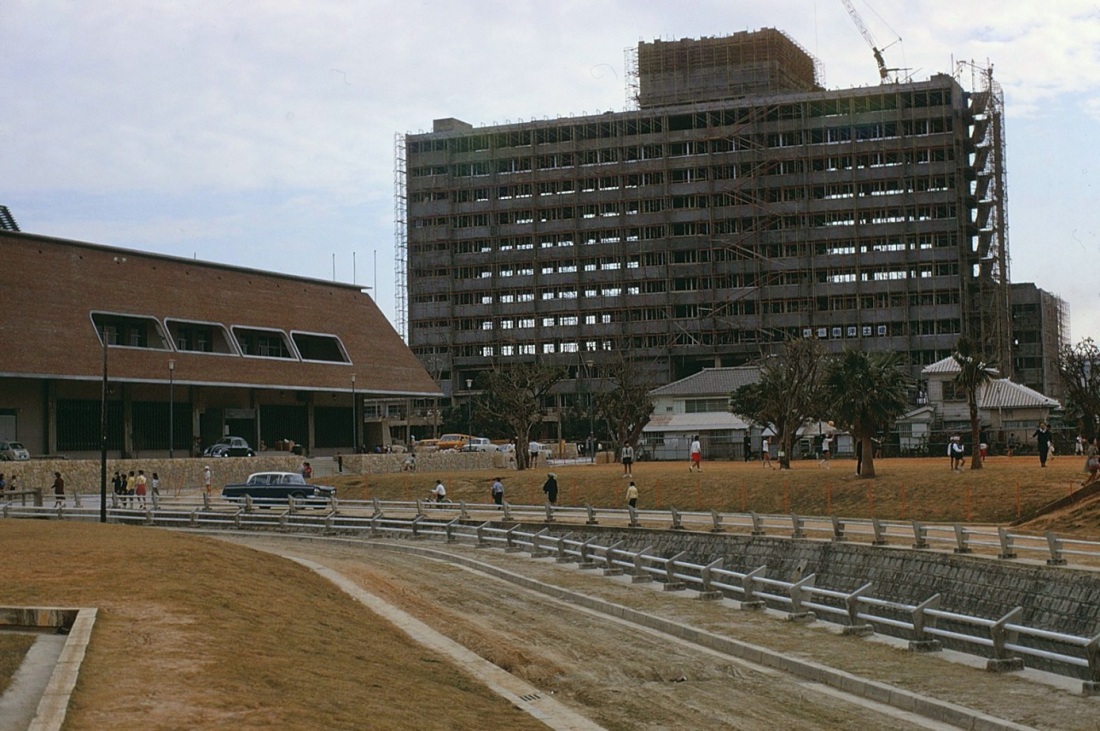 [The ever popular benjo ditch!  In case you’re not familiar with the term “benjo ditch,” it is a shallow, gently-sloping ‘ditch’ that was once used to funnel water and human waste from the cities in Okinawa (and Japan) out to the fields for use as fertilizer  (http://mickmc.tripod.com/benjoditches.html).] 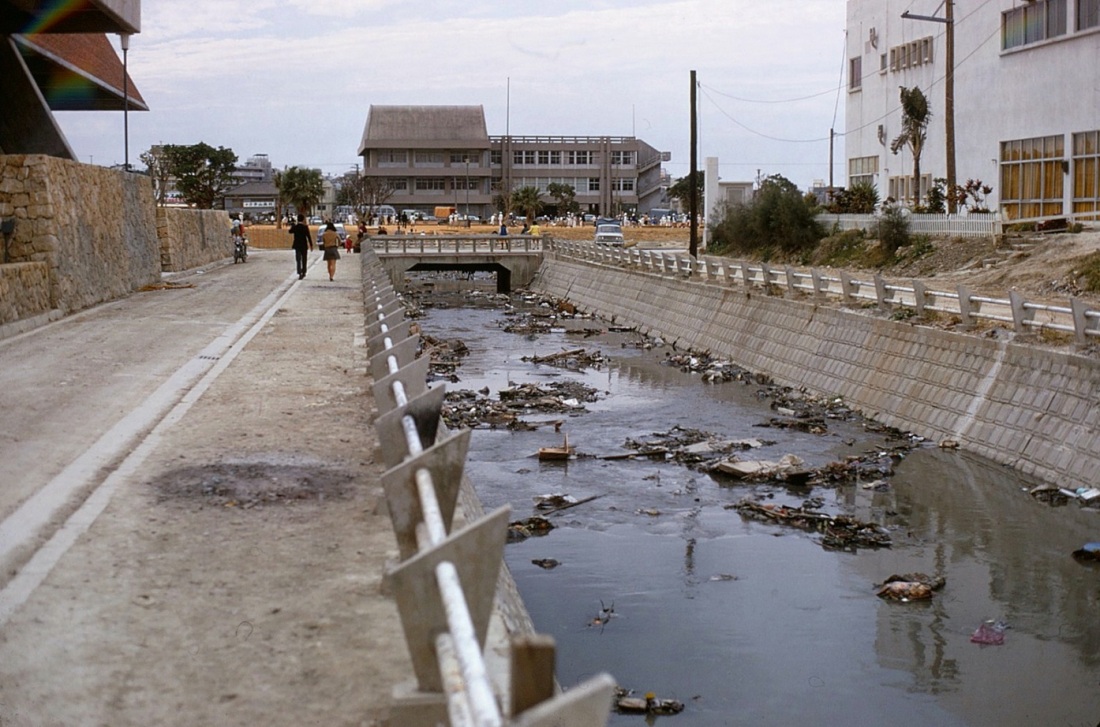 [Meanwhile, back at the baseball game, we have a catcher without any protective equipment, as well as a coach or bystander in the direct line of fire?]

[My car parked next to the barber shop, though I’m sure I wasn’t getting a haircut.  Come to think if it, I don’t remember where or when getting haircuts there?  And also on the street, a female gaijin.  Gaijin is a Japanese word for foreigners and non-Japanese. The word is composed of two kanji: gai (外, “outside”) and jin (人, “person”) (Wikipedia).]

[A blurred Tom Morris in the foreground, as I recall haggling over the price for a chess set?] 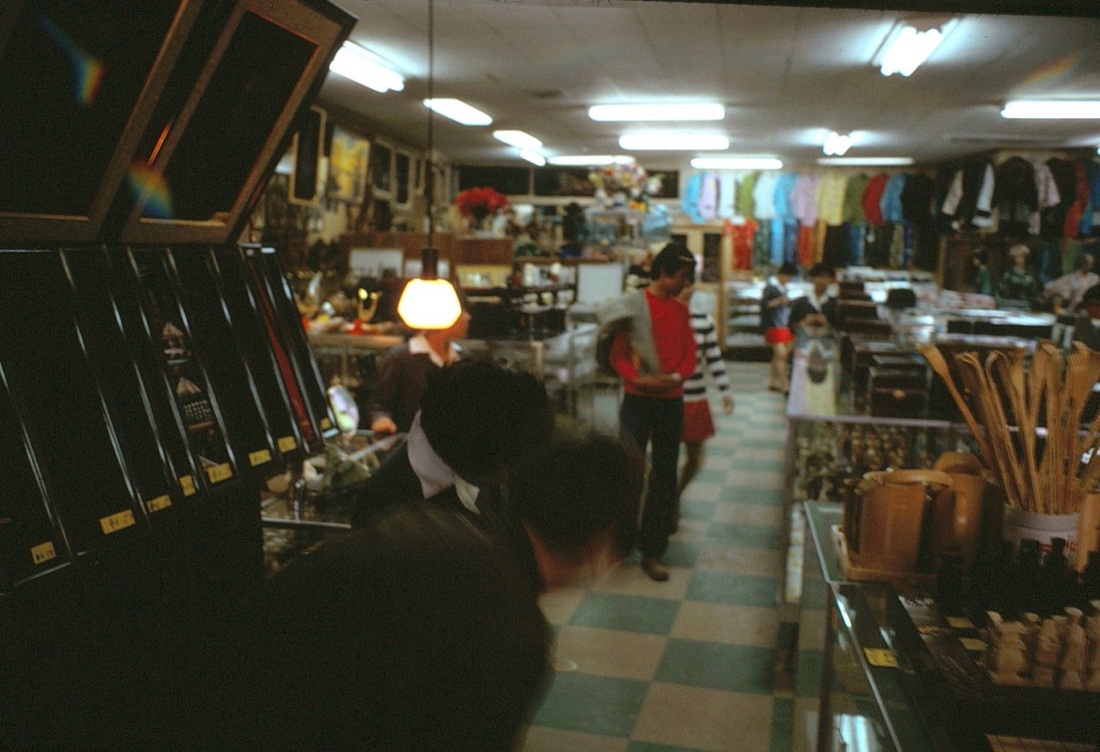 [And wrapping up here with the previously posted photo from the top of the East & West Gift Shop . . . ]

Up Next: Just about done with Okinawa