** Also the birthday of the Super’s brother Dan and sister Faith, though Dan is two years younger . . . 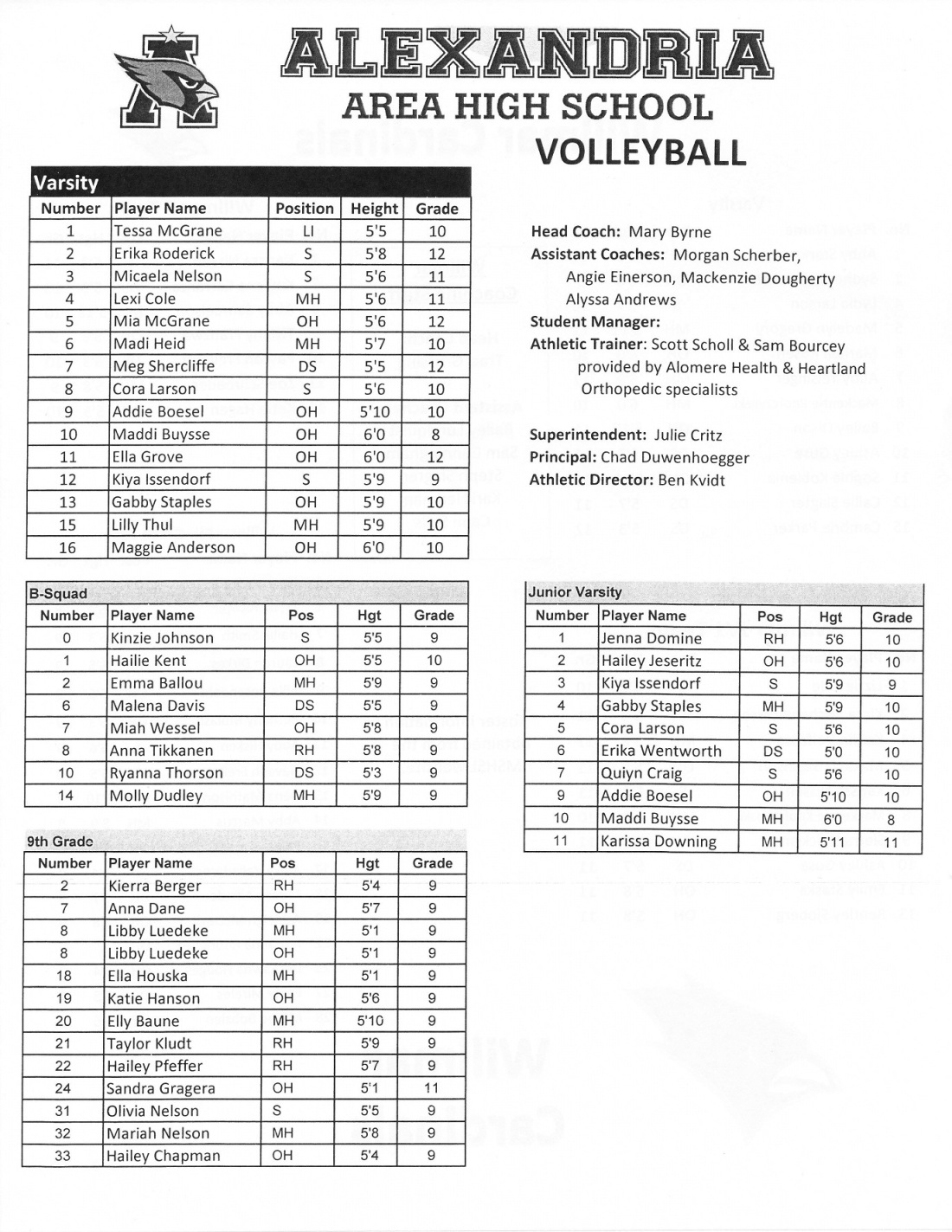 [We arrived in time for our usual seats, whose sightlines become partially obscured with the arrival of the student fans.  Well, it’s their gig . . . ]

[Here’s the loyal opposition, the dreaded Moorhead Spuds.  Based on the records coming into the game, the Spuds would have to be considered the favorites . . . ]

[The home standing Cardinals were coming off a tough 1-3 weekend against Twin Cities teams . . . ]

[Nevertheless, they seemed to be in fine spirits.  I didn’t notice until I processed this photo that high school classmate Gary Ekdahl is in the background (red shirt) – I understand he has a history with the Alexandria volleyball program?]

[Number 2 for the Spuds is Claire Howell.  She is the state champion in the 400-meter dash.  Her grandparents are Alexandrians . . . ] 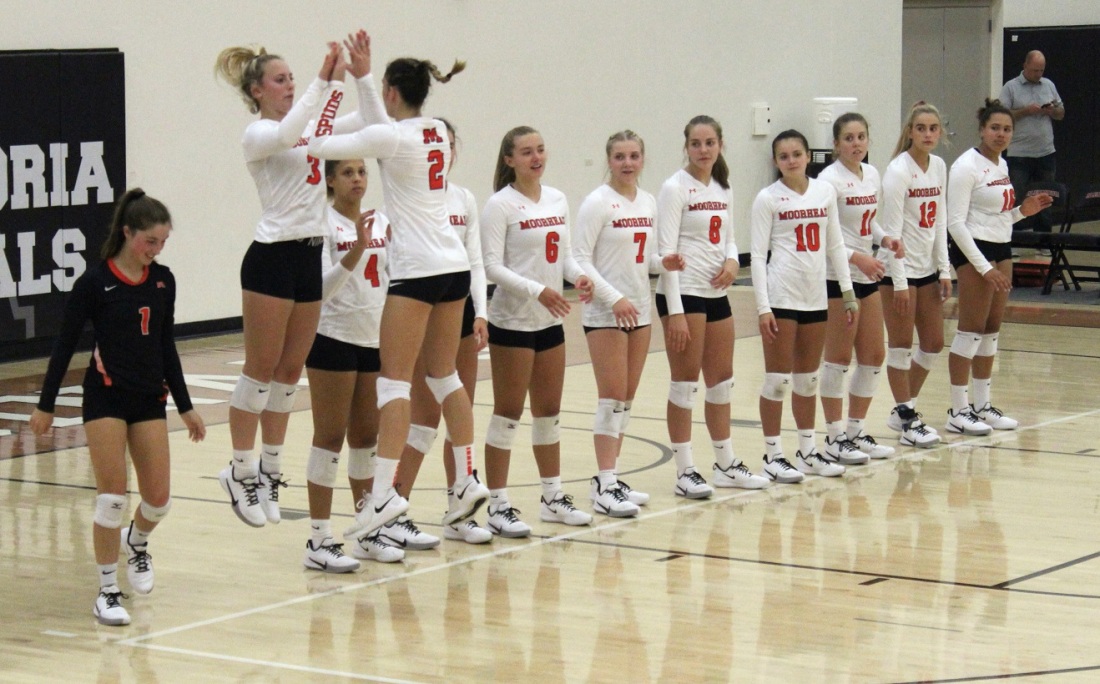 [The Cardinals engage in high five practice as a prelude to match commencement . . . ]

[It must condition the hands prior to swatting the ball around?]

[Since that formation generally leaves wide portions of the court undefended, the players generally fan out from here.  The McGrane sisters (sophomore libero Tessa (1) and senior Mia (5)) at the end of the line discus where they are going to go next . . . ]

[The game begins.  The aforementioned Howell grandparents are in the upper left – Ken in a black Spuds tee shirt, Jeanne in a red shirt (reflecting torn loyalties since their kids were Cardinals?) . . . ] 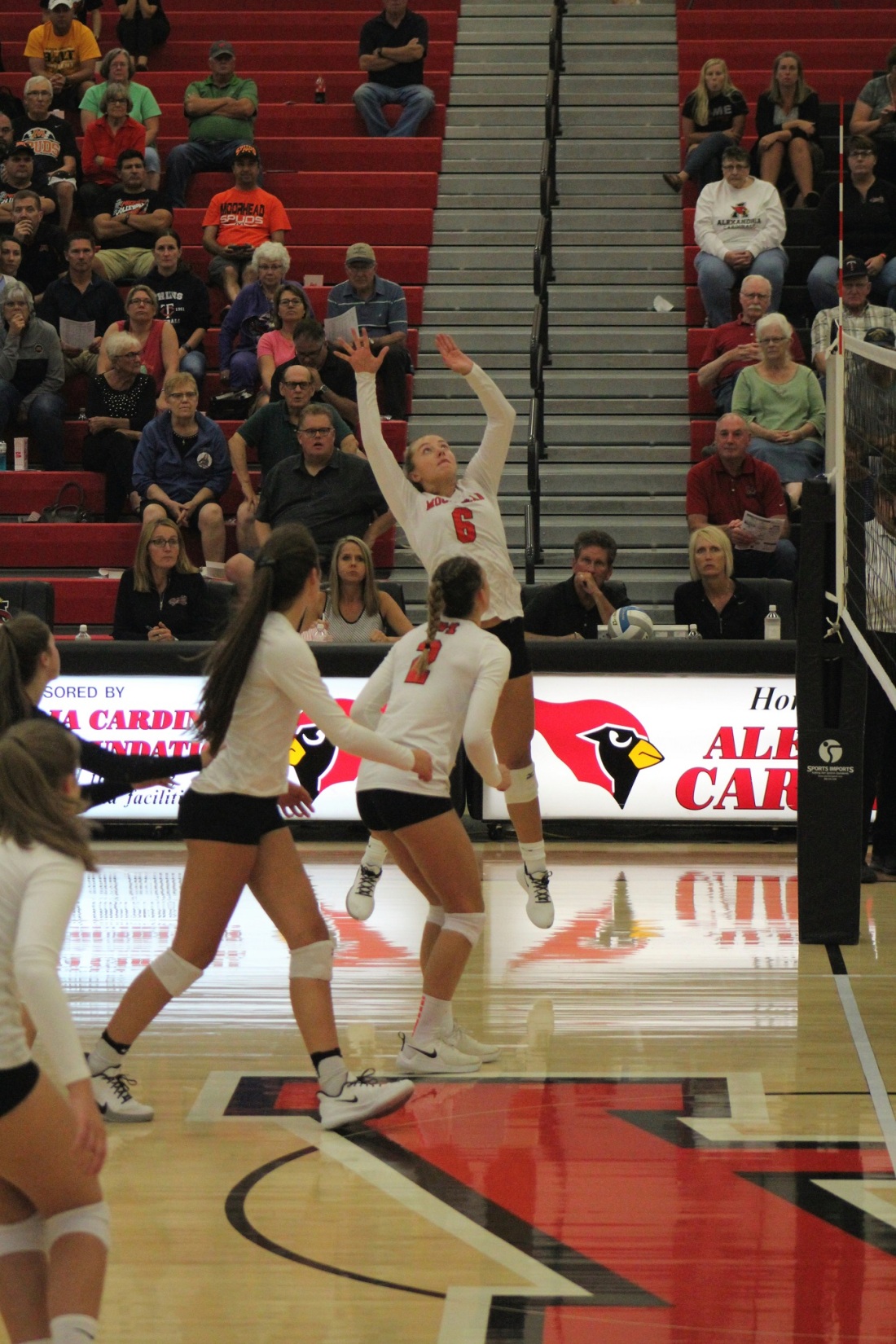 [Cardinals Mia and fellow senior Meg Shercliffe (7) decide it’s time for a visit with teammates on the bench.  Meg is also a hockey forward . . . ] 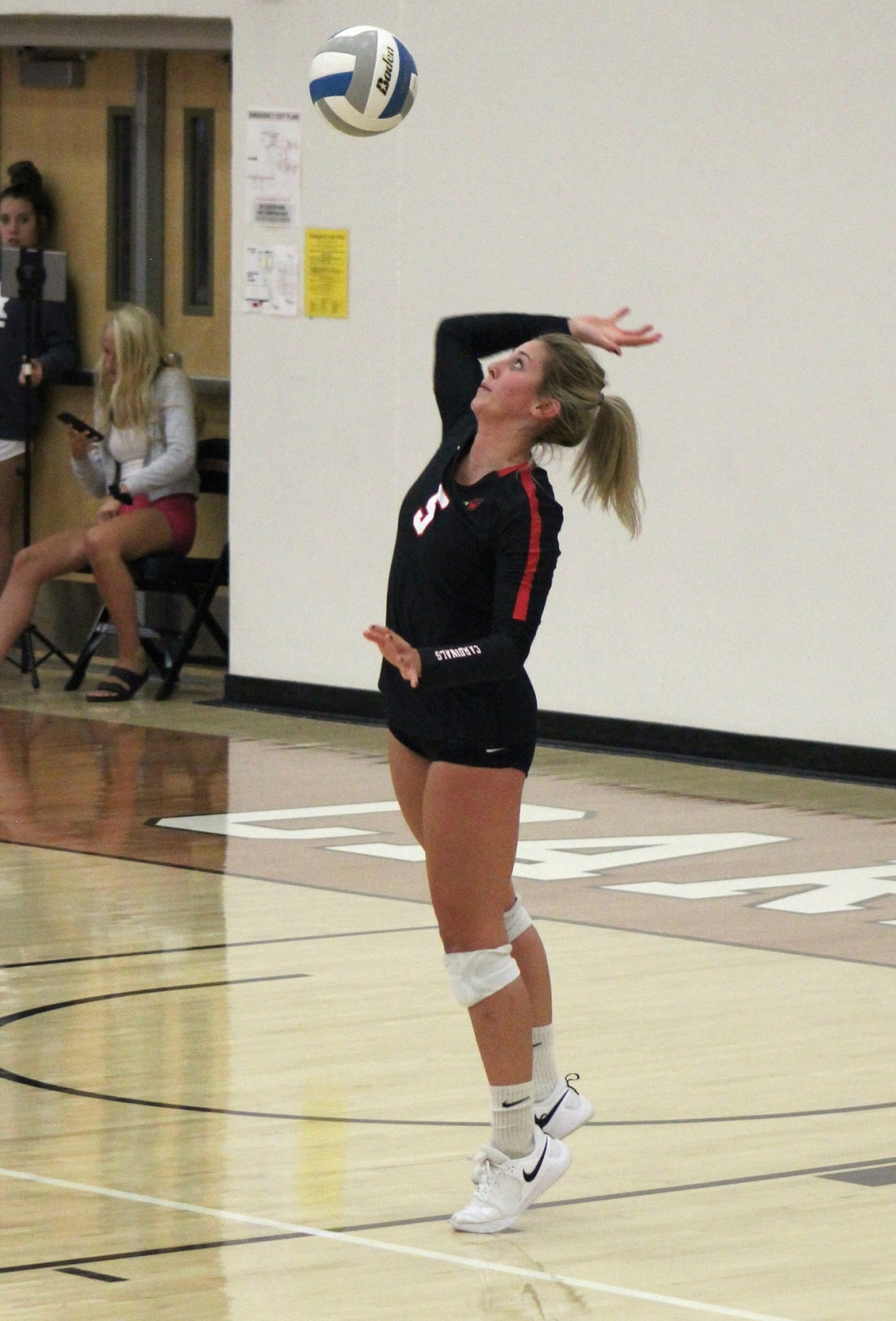 [Sitting in the background is Alayna Strand (in shorts), who I believe is a student manager and likely also will be a starter on the basketball team . . . ] 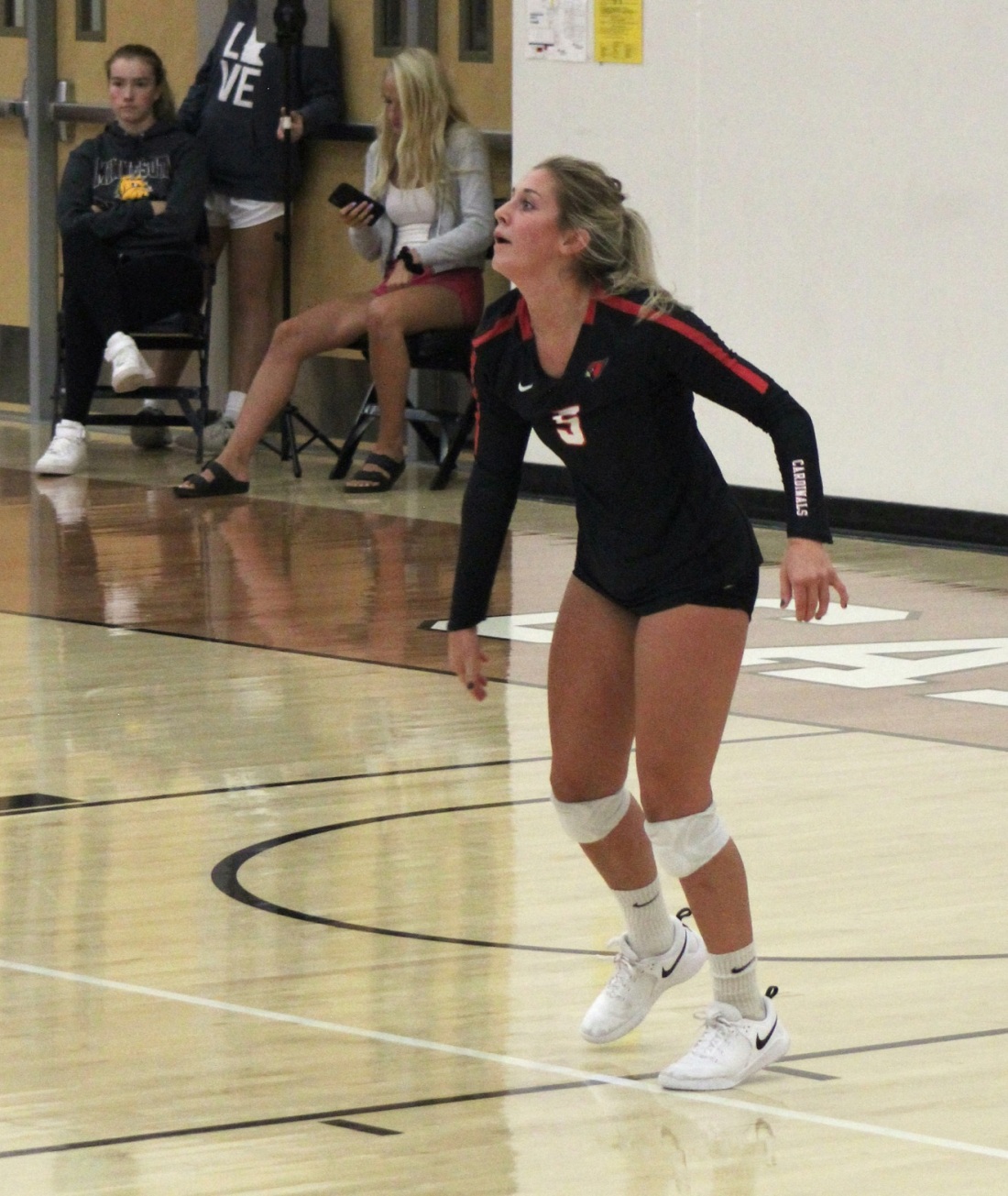 [Senior Erika Roderick (2) serves.  Erika is the team’s setter, and as I recall is also a sprinter on the track team . . . ] 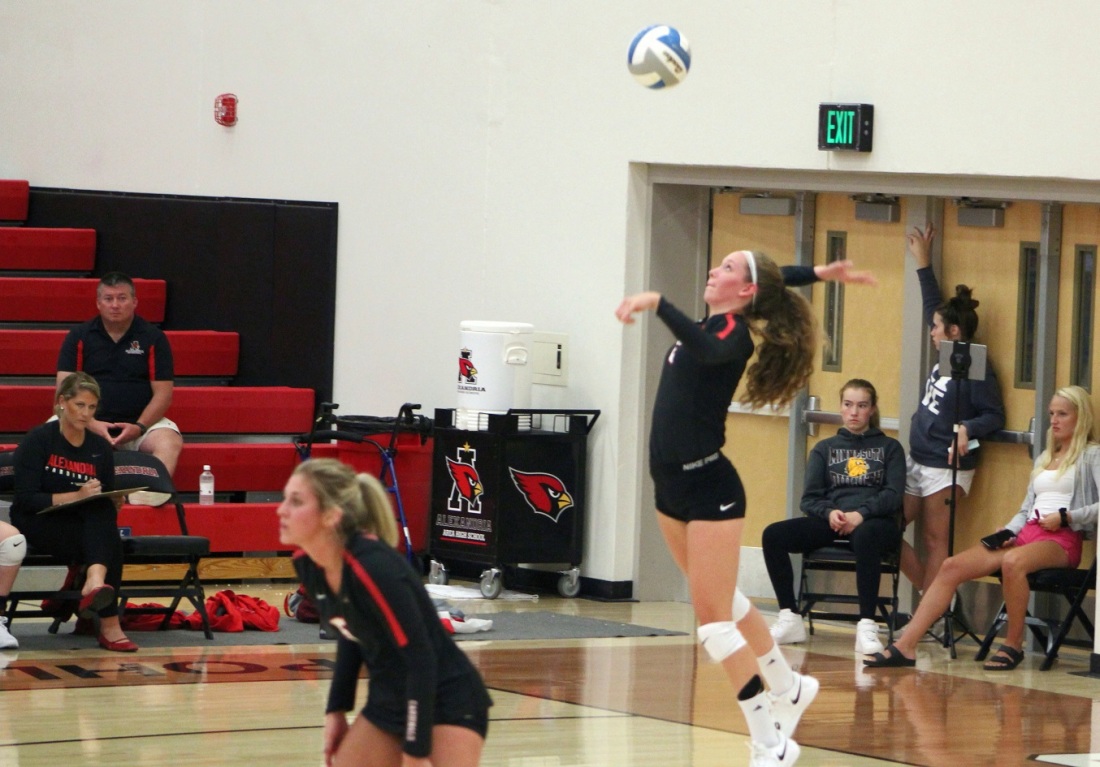 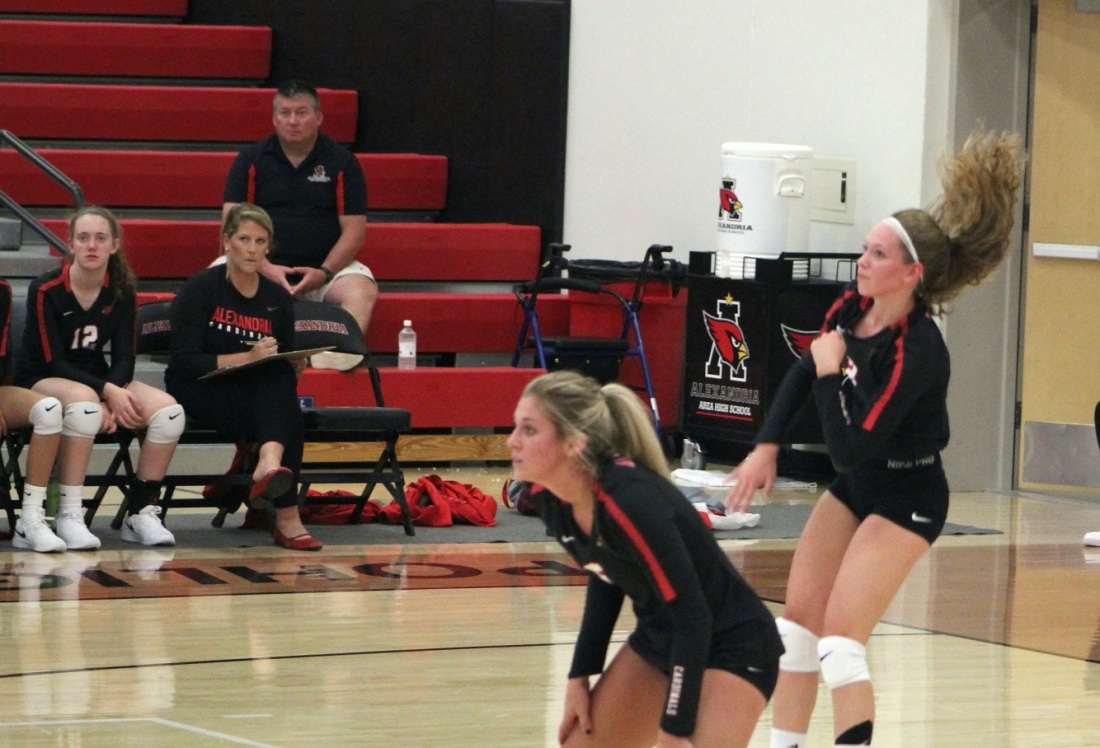 [The Grandparents Howell engrossed in the action . . . ]

[Keeping an eye on granddaughter Claire . . . ] 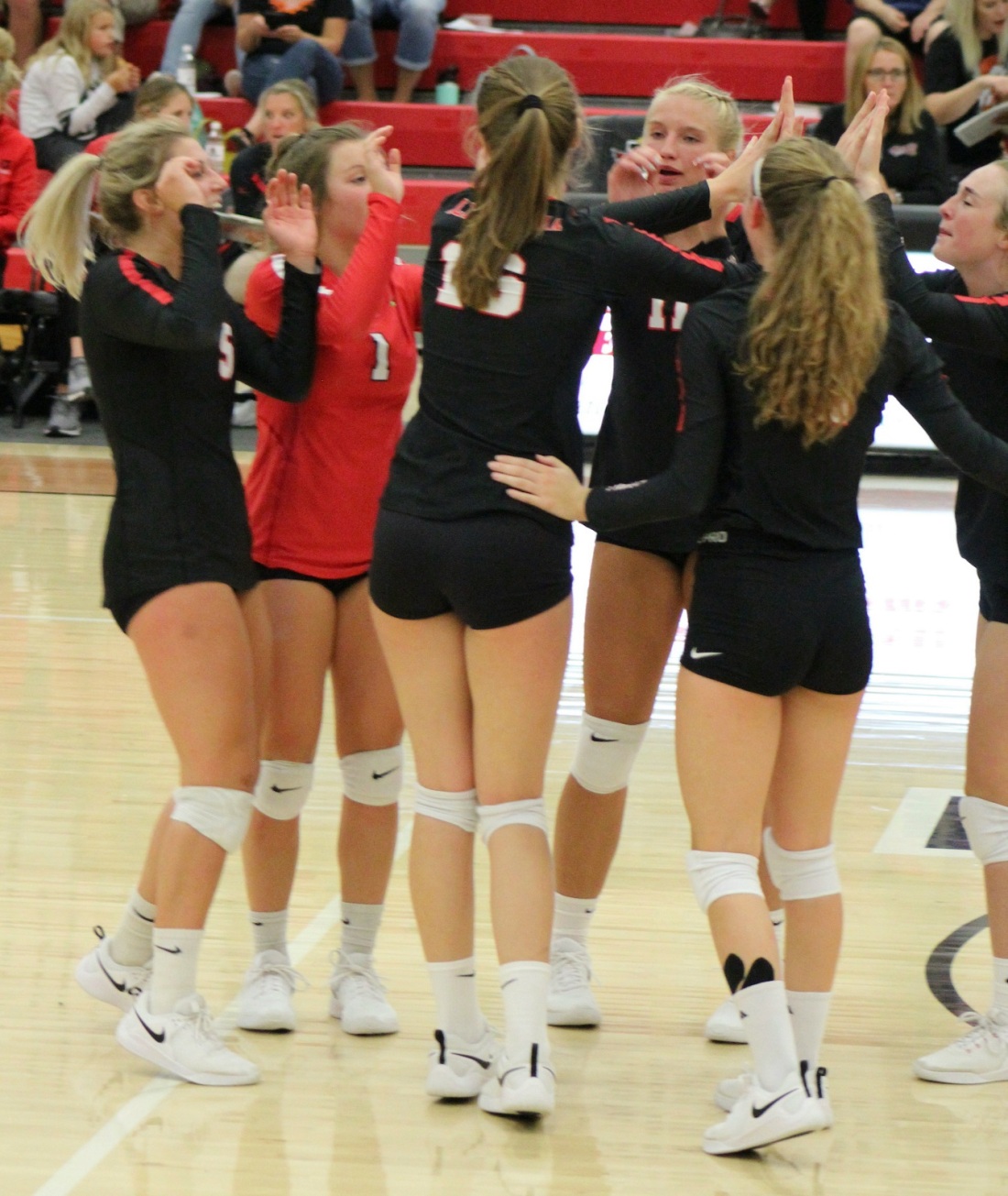 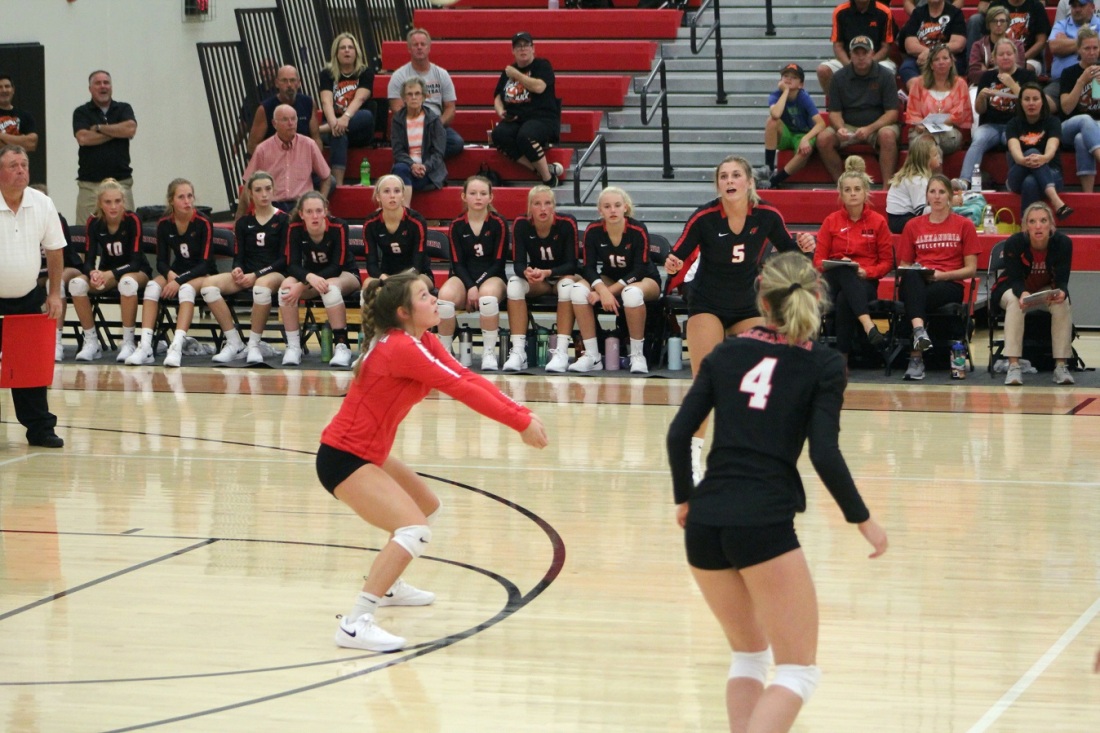 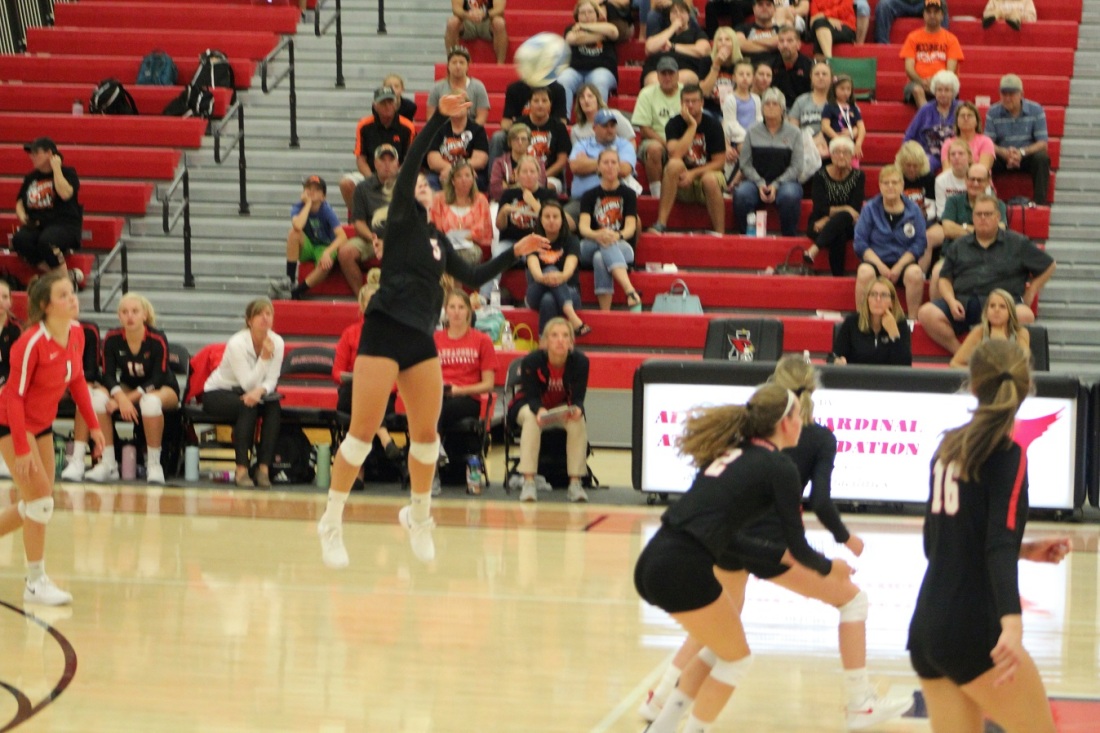 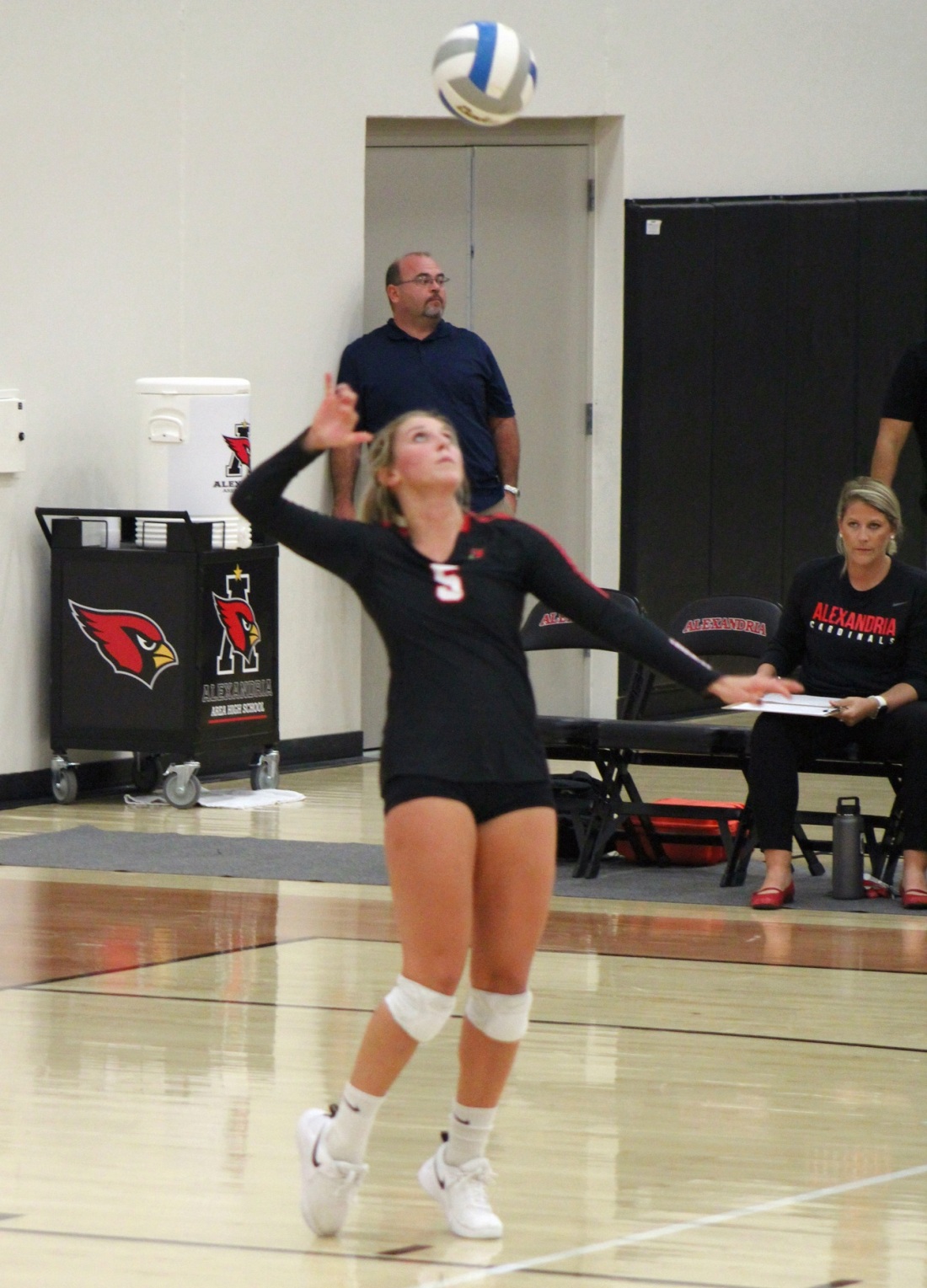 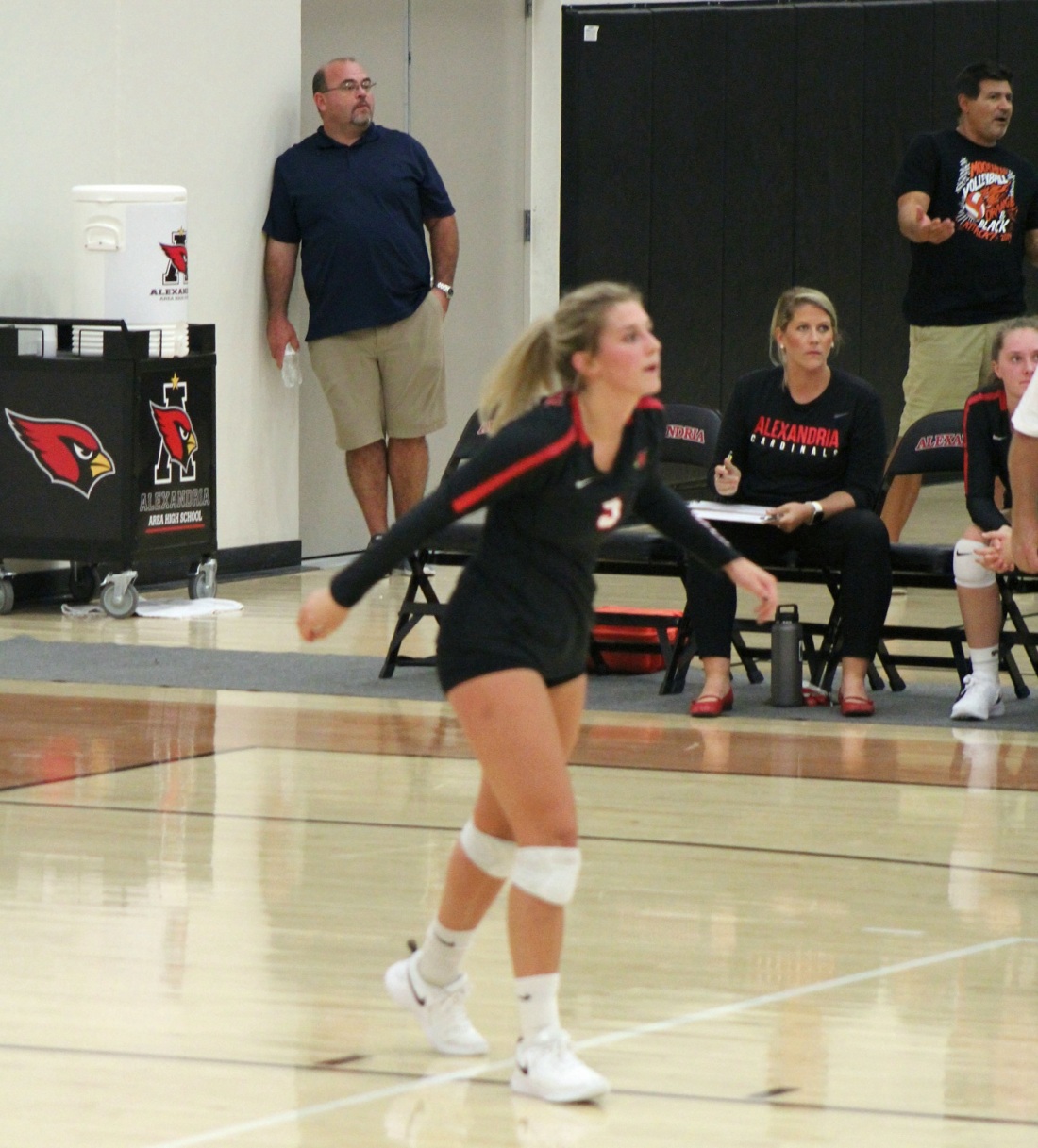 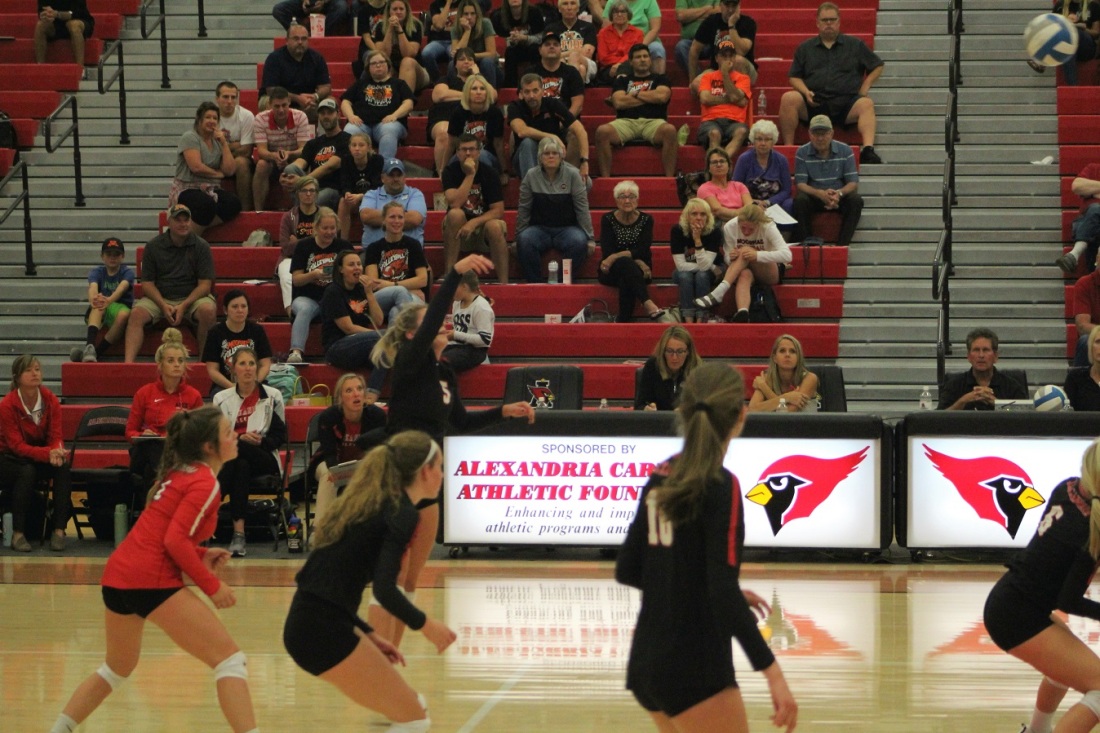 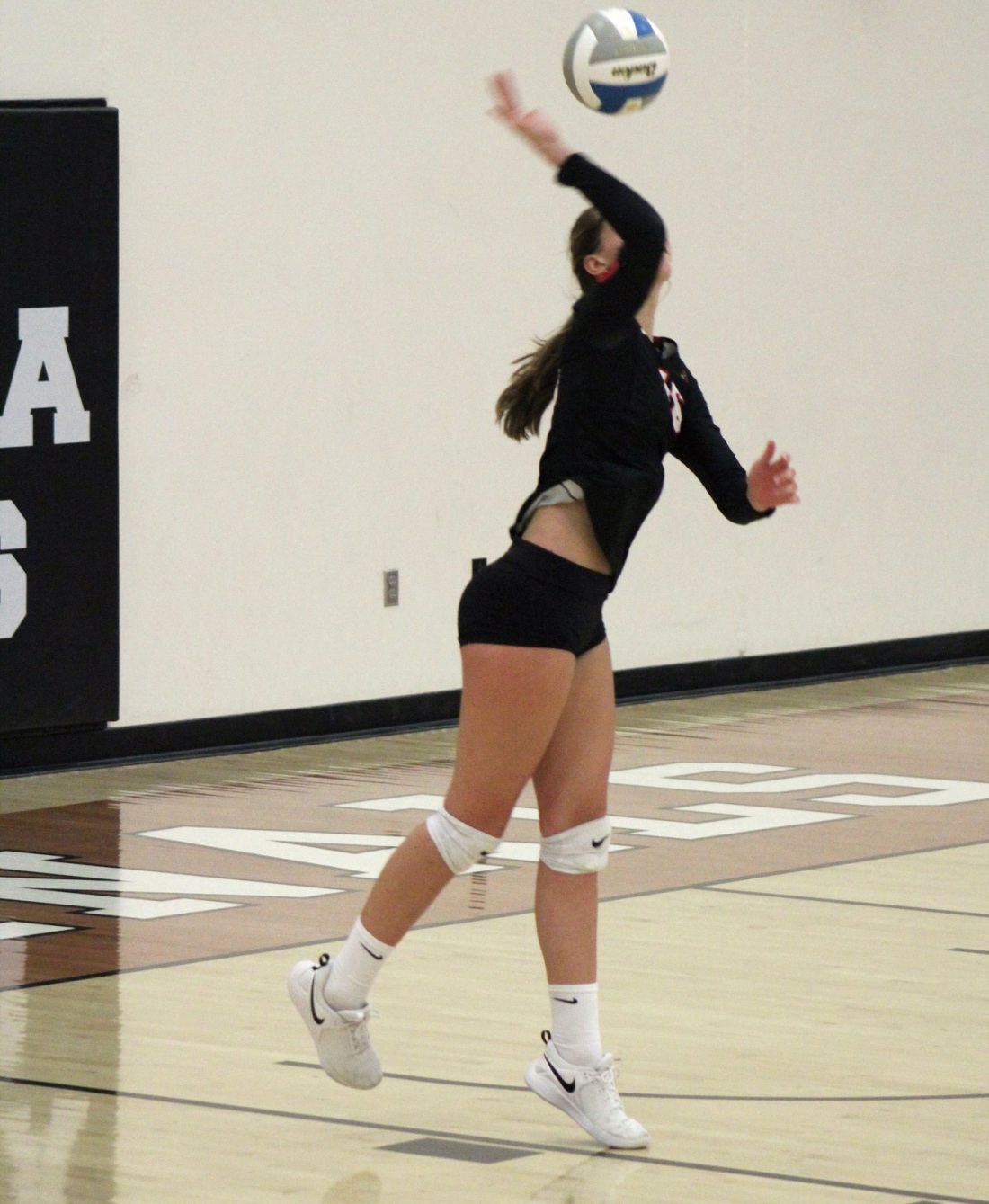 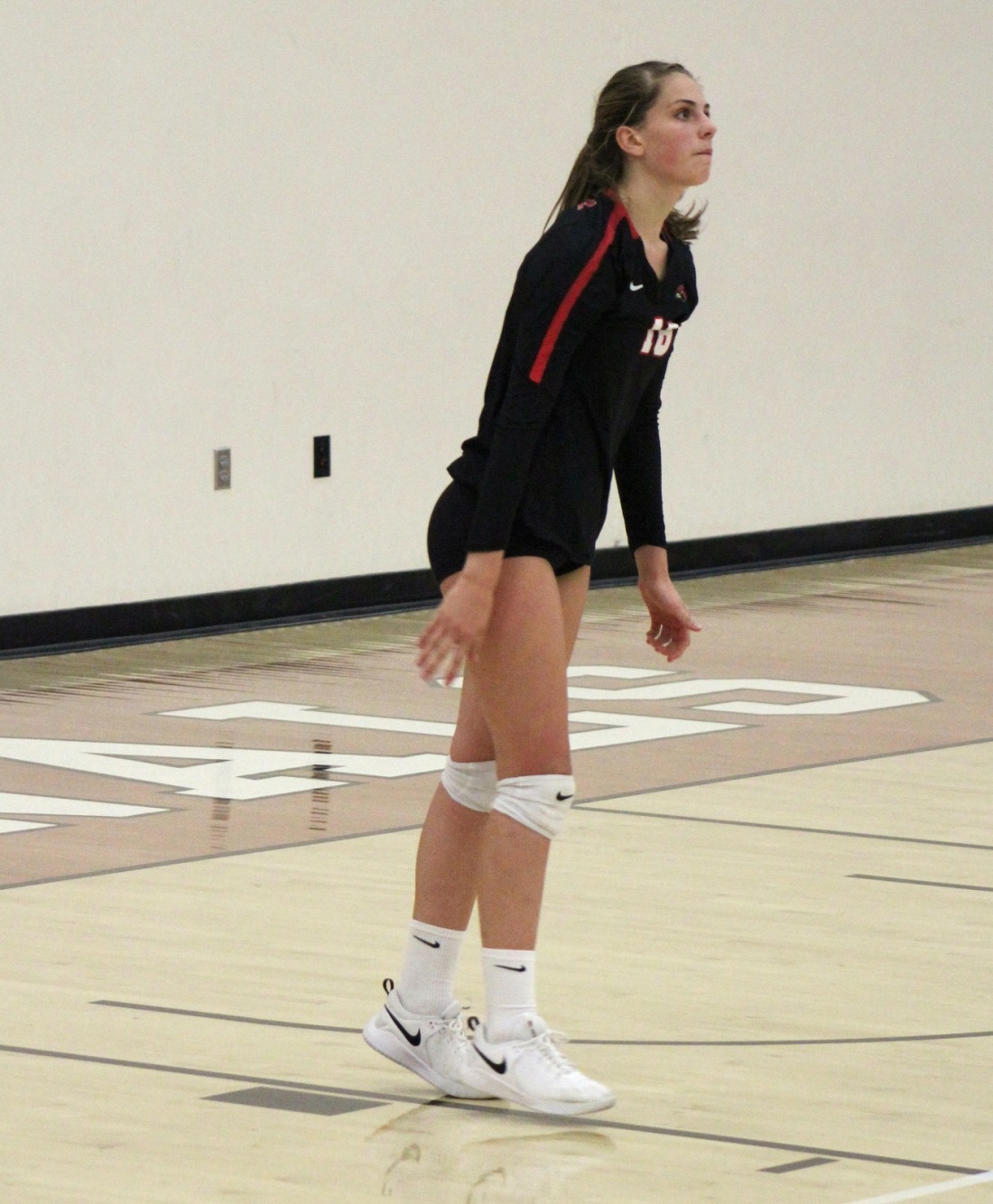 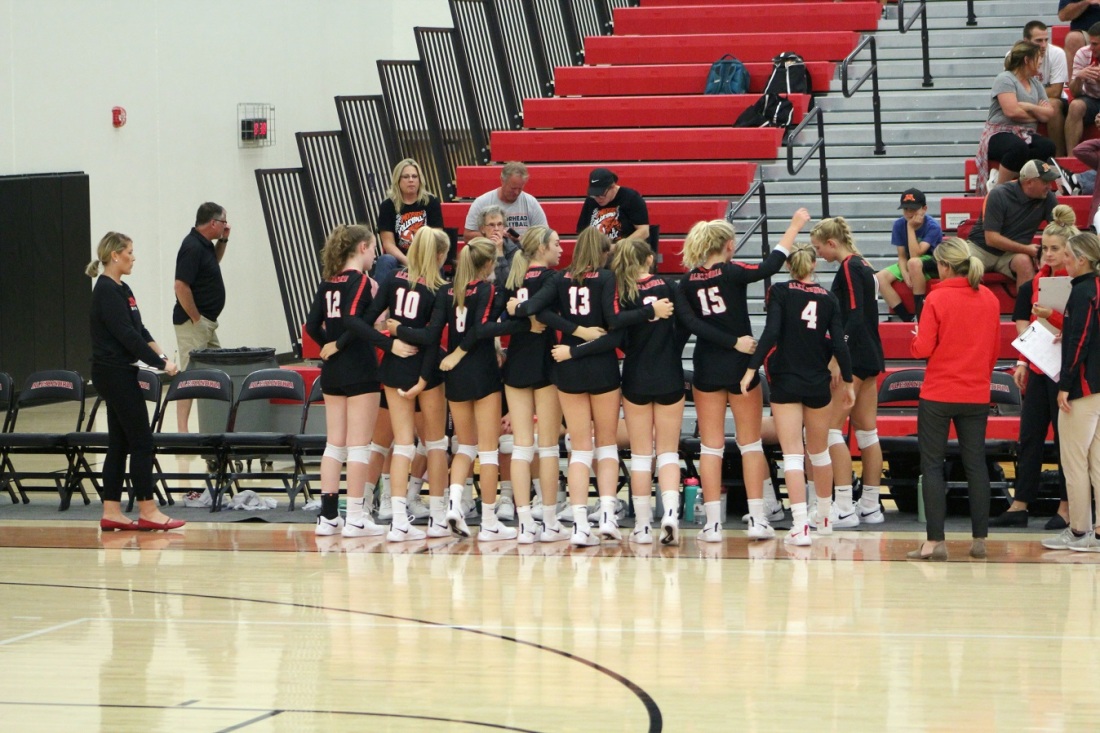 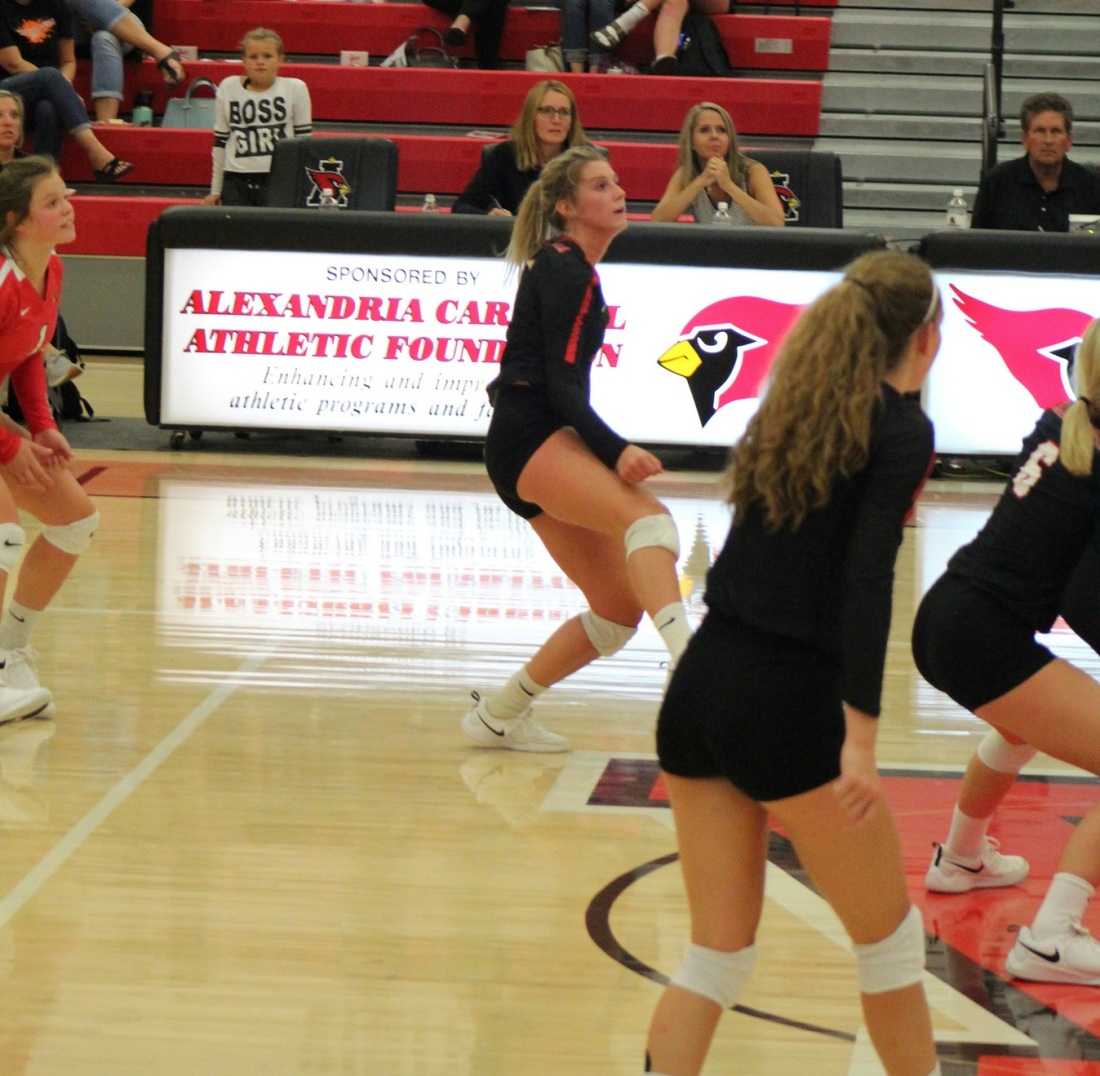 [She draws your attention with her all-around game . . . ]

[But her athletic ability holds your attention.  She’s ‘only’ 5’6″ but she has a great vertical (meaning she jumps high).  So, she gets a lot of sets for kill opportunities, and I believe she was the leader in such in this game . . . ] 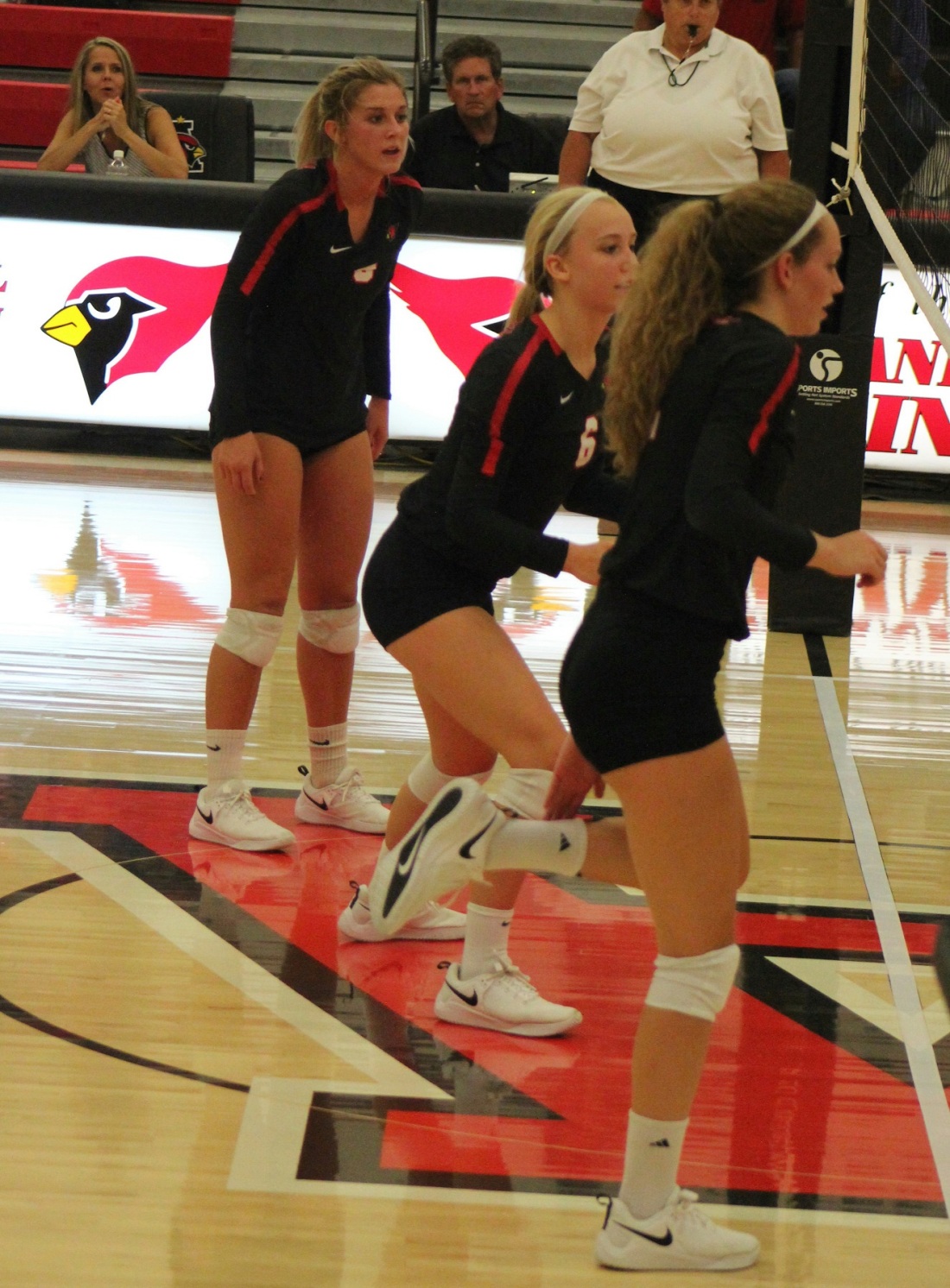 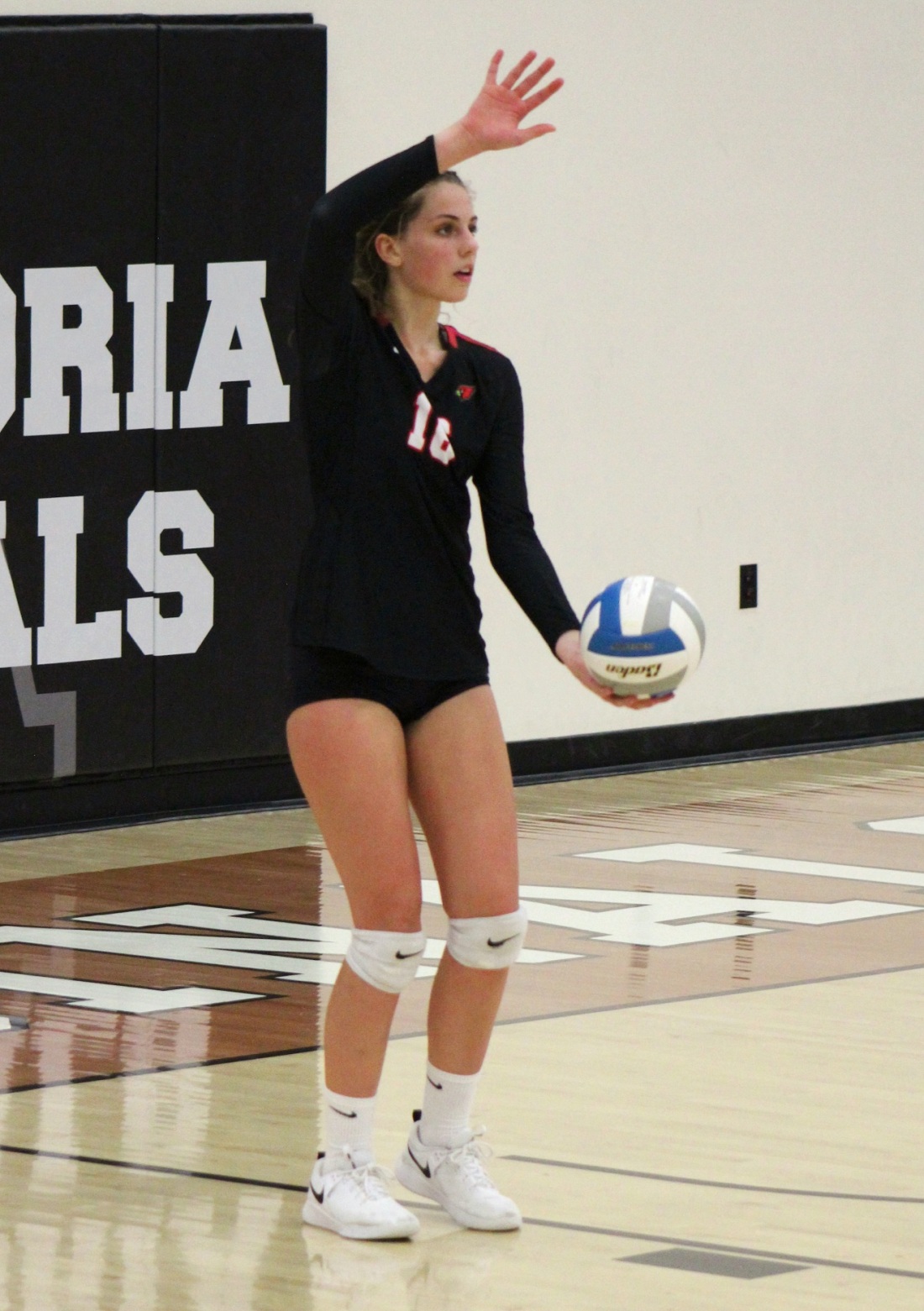 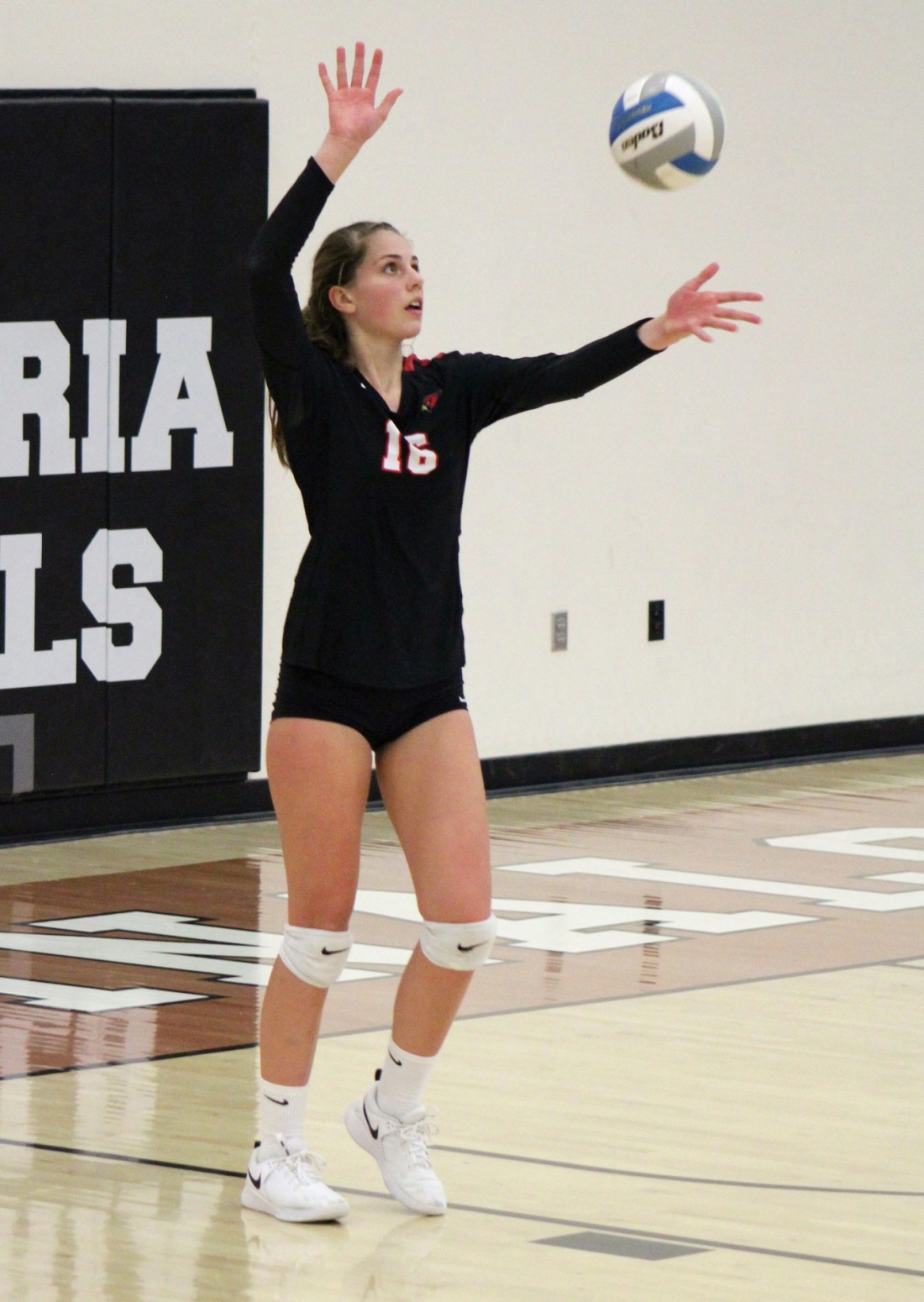 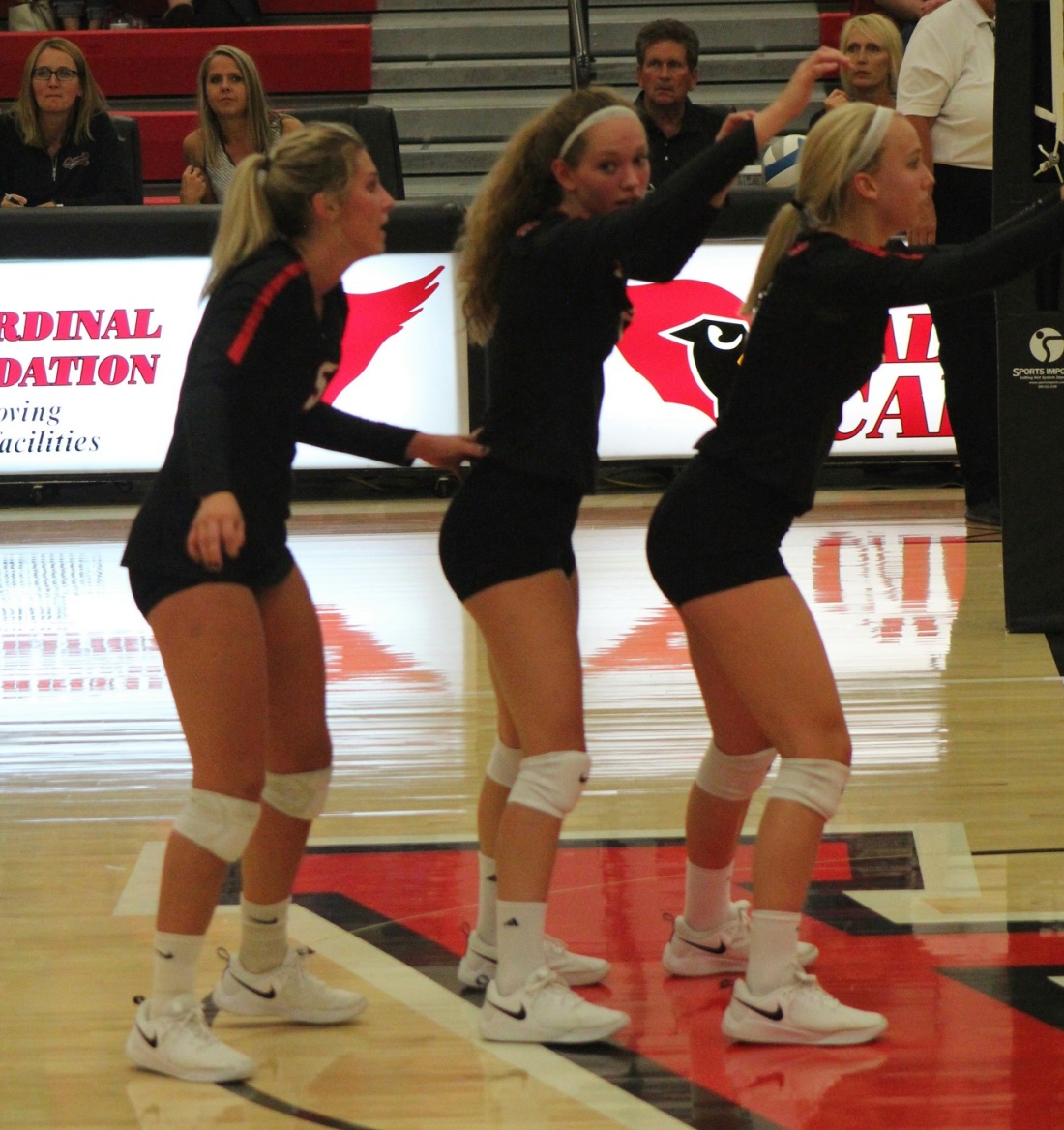 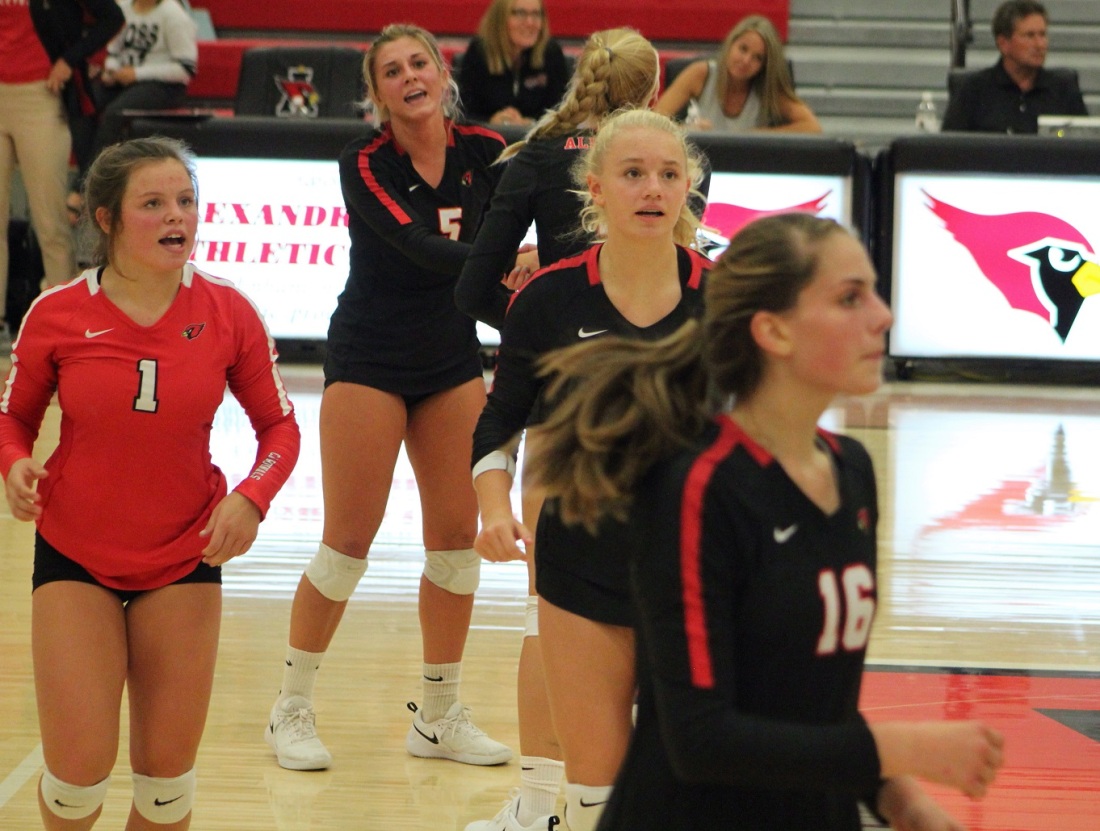 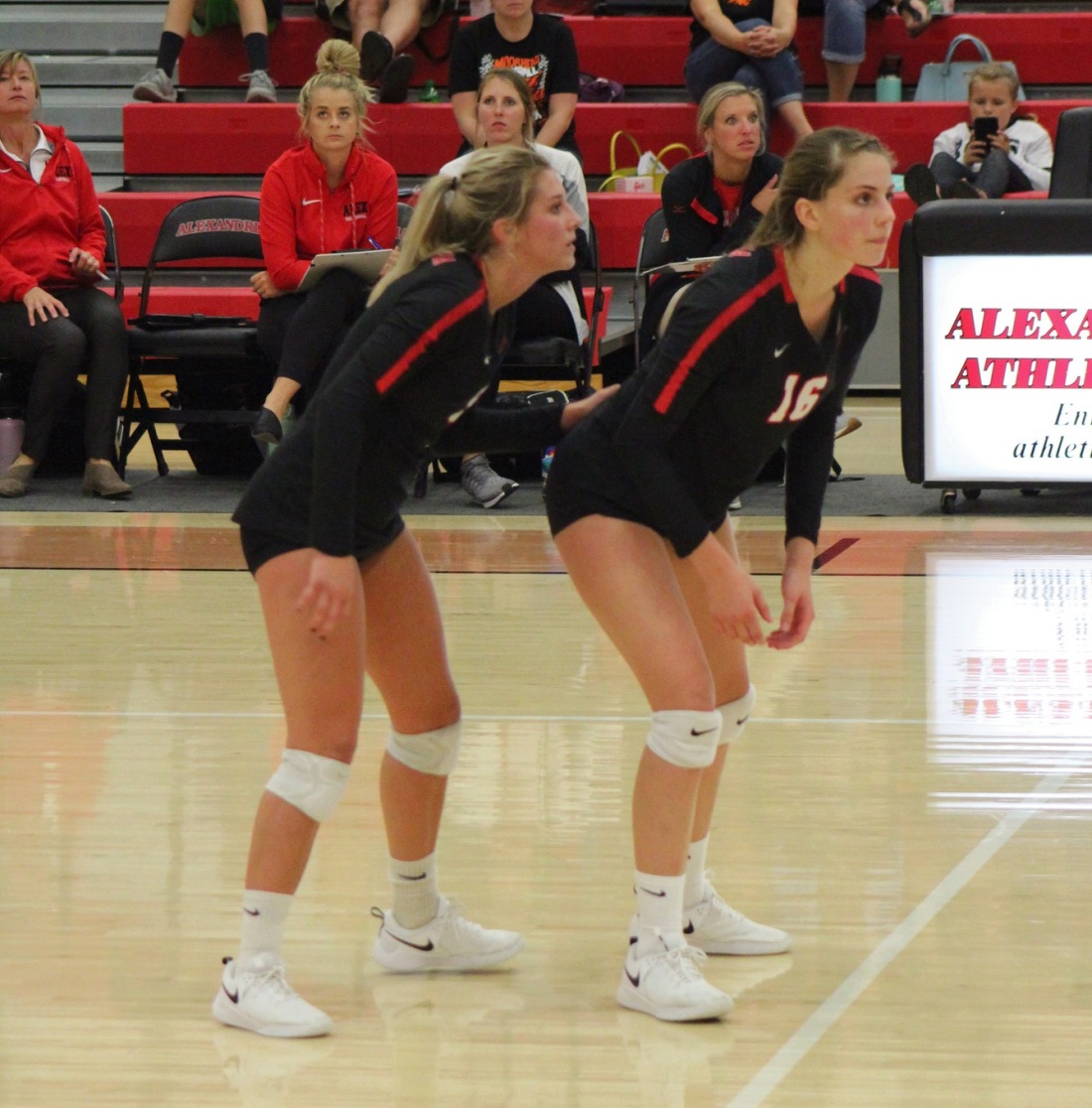 My coach tells me to give about 75% to volleyball. If I give 100%, my serve will kill someone, and my coach doesn’t want to deal with the paperwork.  ~  Unknown