The opening play at Theatre L’Homme Dieu (TLHD) last summer was “Bright Star,” a production by Minnetonka Theater.  It received resounding reviews from all attendees.  The Super and I were on our Norway cruise then (which, of course, I am still blogging) so we missed it.  Minnetonka invited those connected to TLHD down for the opening night of “Chaplin.”  These kids are amazing, again a performance worthy of professional theater.  I present the theater program for those who saw “Bright Star” and may recognize some of the performers . . . 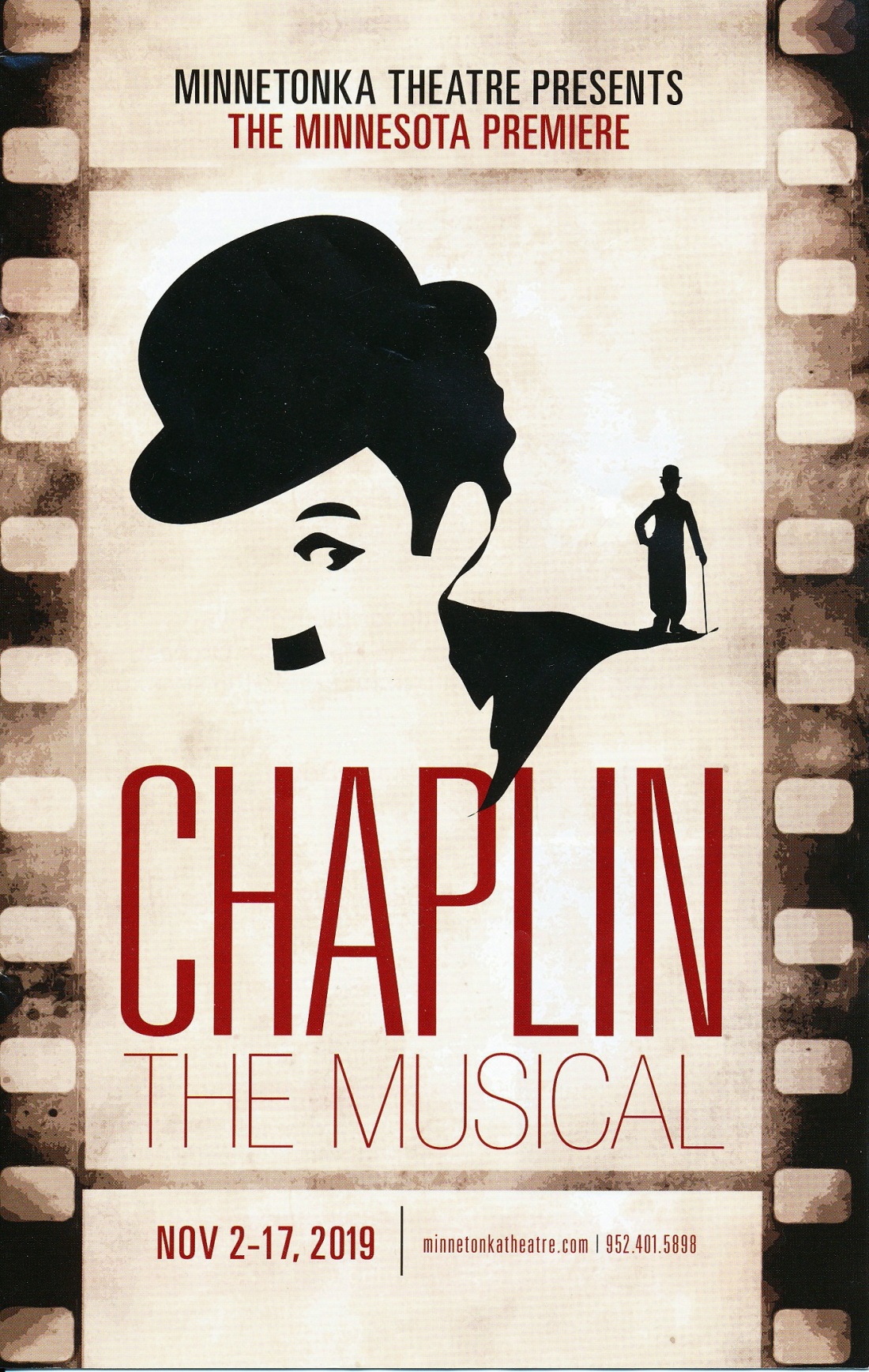 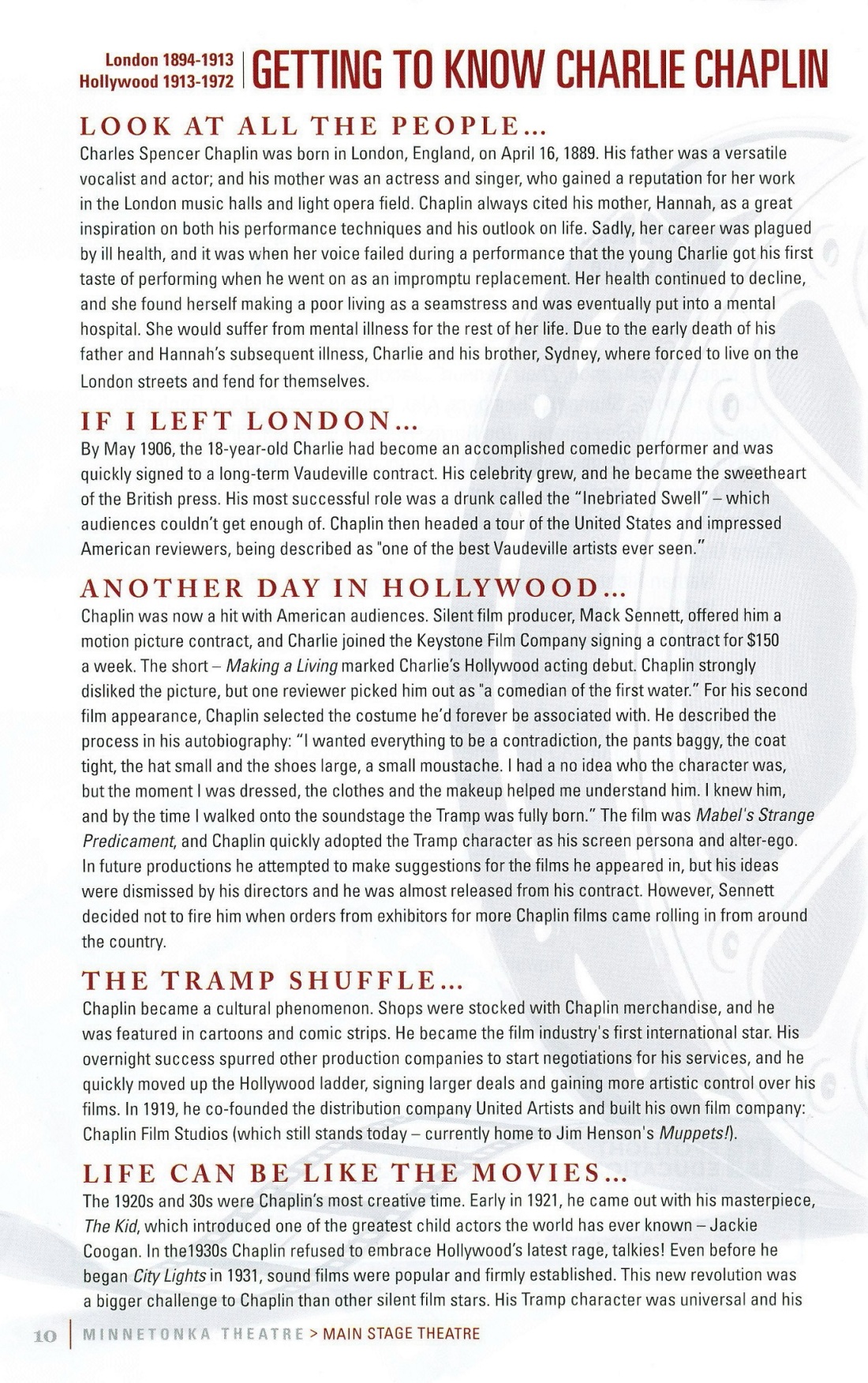 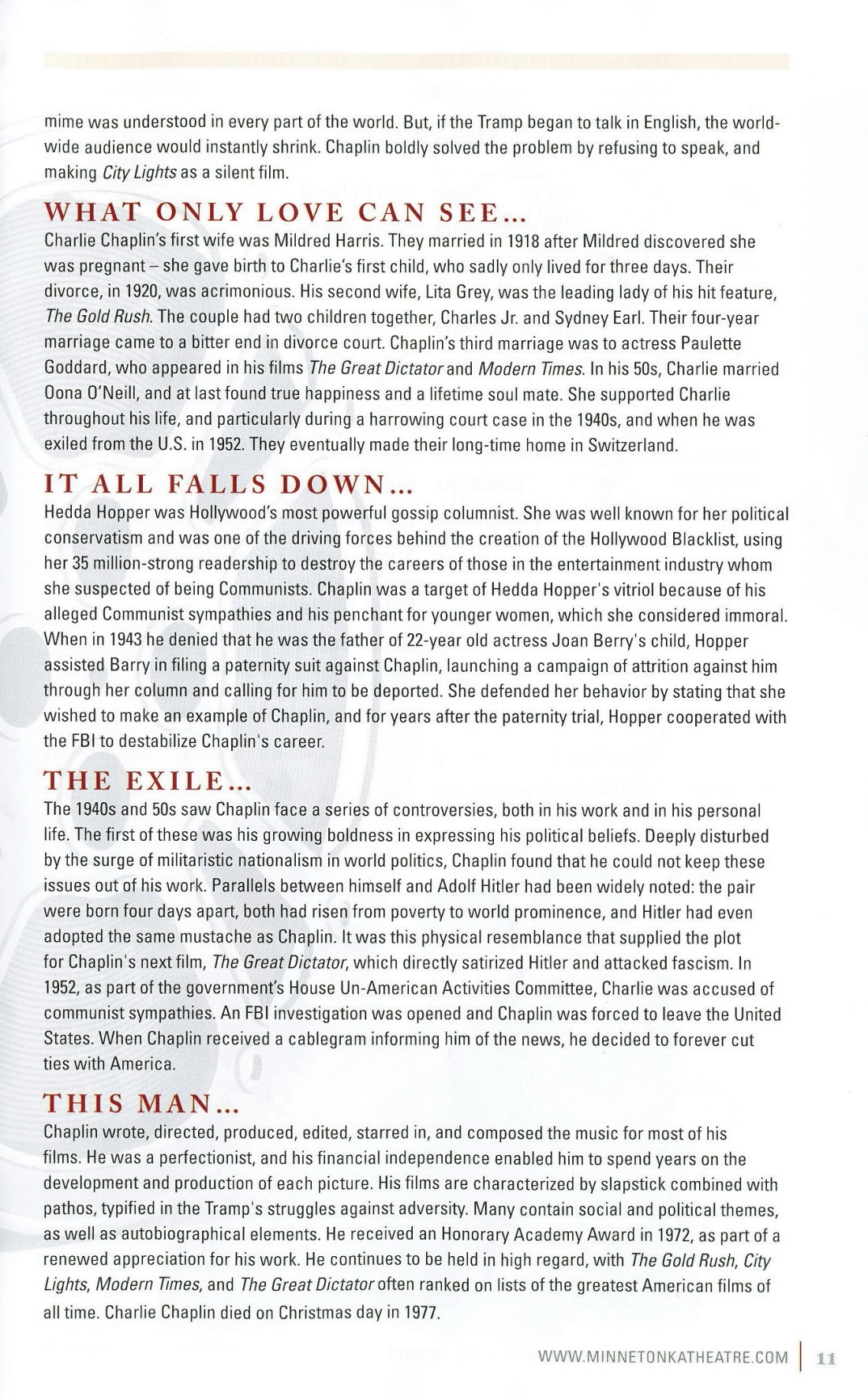 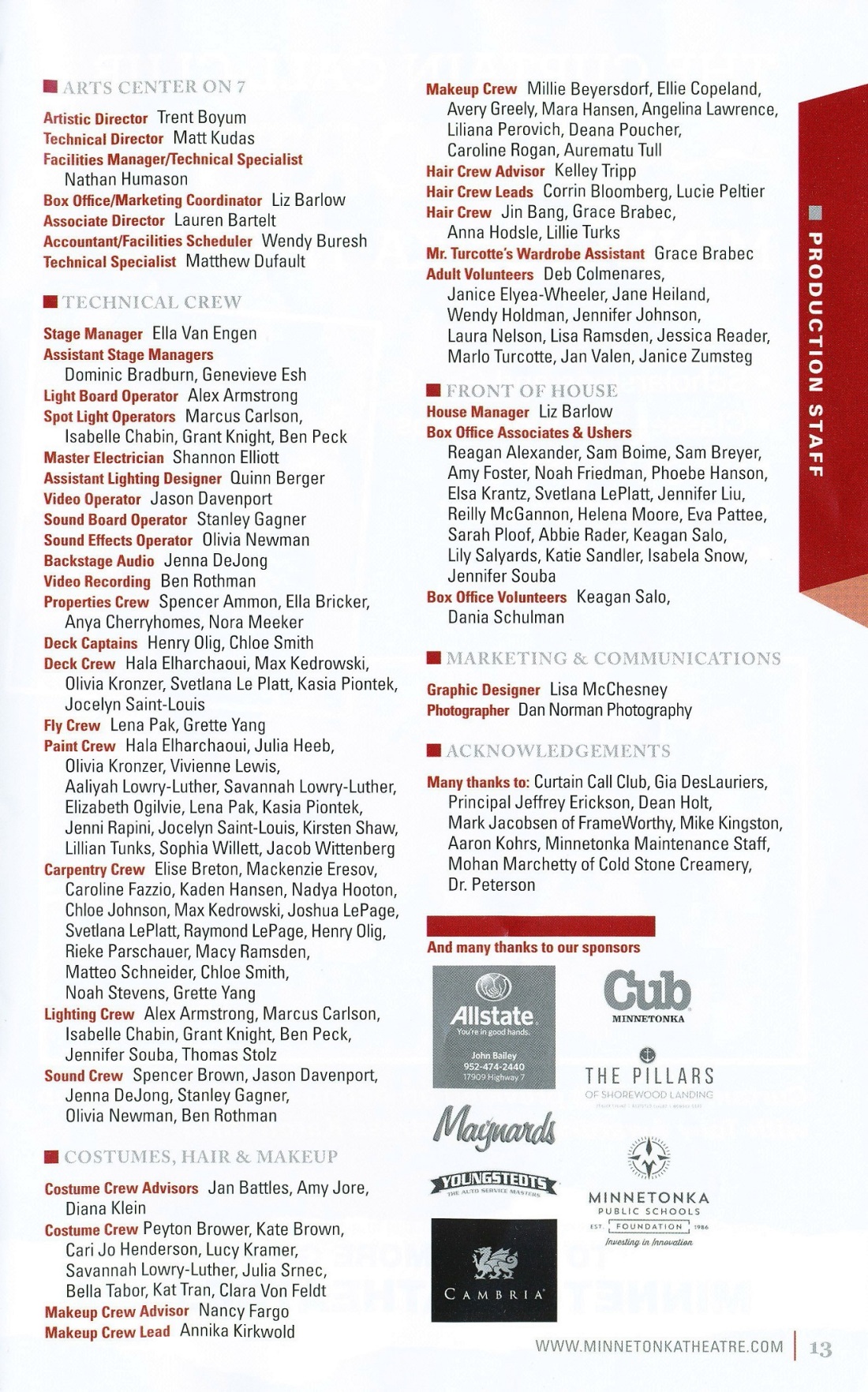 [I will not bore you with all of the details of the Super and I trying to find our way around in the big city, at night, where we didn’t know where we were going, even with the help of Siri, but we had a very enjoyable meal at Christos, a Greek restaurant in Minnetonka, and thanks again to the Mulders for finding my phone which apparently slipped out of my coat pocket at the play.  But I digress.  We mostly prefer now to not leave the friendly confines of Alexandria – because we always find plenty to do here.  On this night the Concordia (Moorhead) choir came to Alex and performed with the Central Lakes Symphony Orchestra strings at the high school’s Performing Arts Center . . . ]

[And on the other side of the high school, Moorhead beat Sartell in volleyball for the section title and right to go to the state tournament.  These are happy Spuds . . . ] 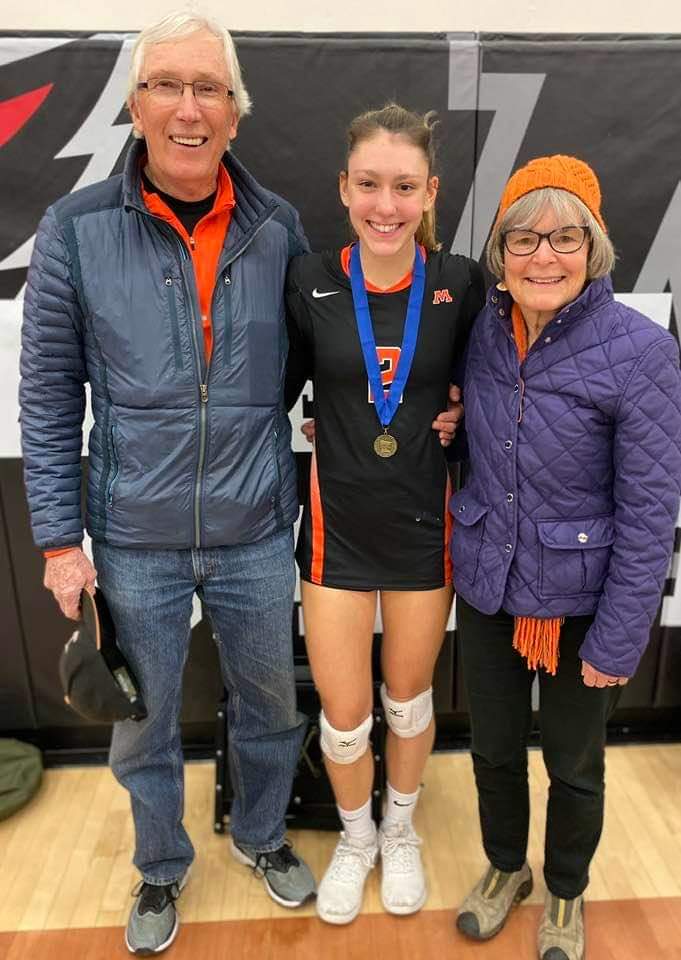 [The previous day was brother Cam’s 65th birthday.  With the aid now of Medicare he is going to have both knees replaced as soon as possible.  And likely many other body parts as well.  Since both parties were previously engaged on his birthday, we decided we would celebrate together with Sunday breakfast at Hell’s Kitchen.  When the Super and I left our hotel in the morning, Ben Franklin’s choice for our national bird were fattening themselves up for Thanksgiving . . . ]

[Siri guided us out of the complex maze of our hotel area to the interstate leading into downtown Minneapolis . . . ] 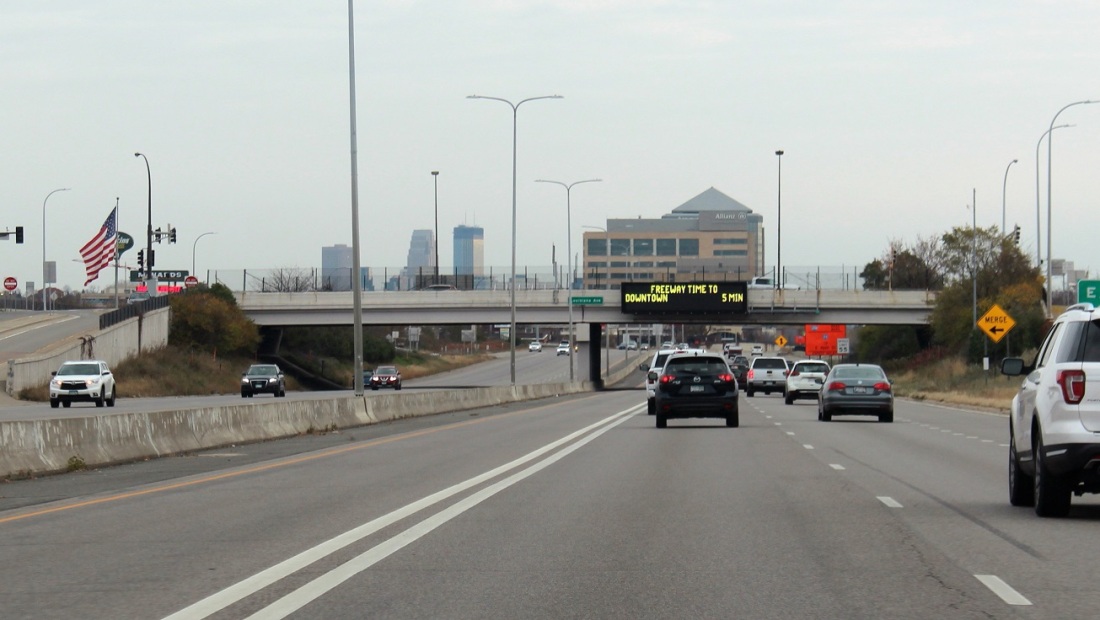 [To Hennepin Avenue, undergoing yet another attempt at urban renewal . . . ]

[Past the Minneapolis campus of St. Thomas University . . . ] 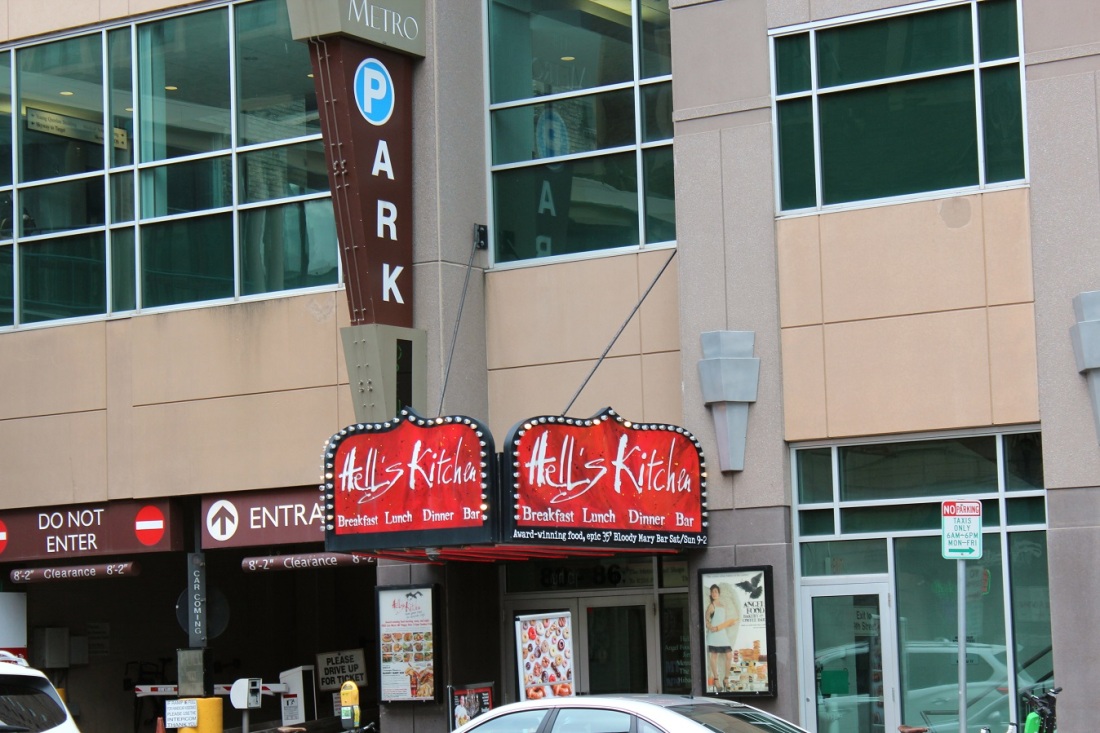 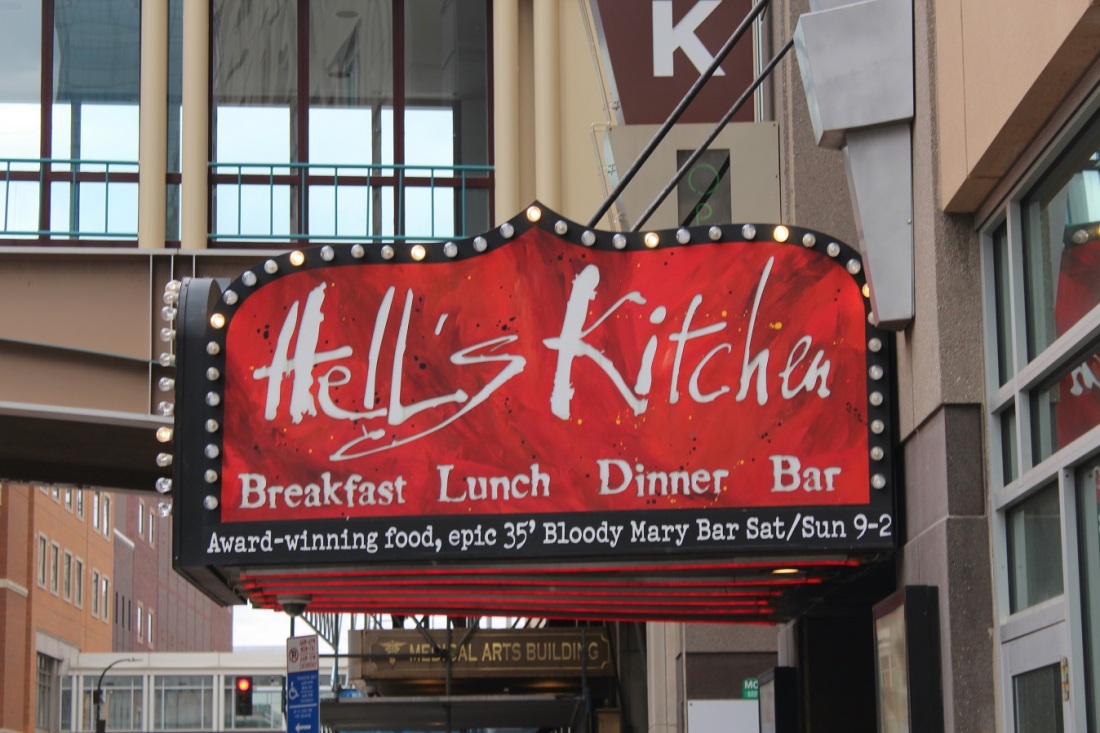 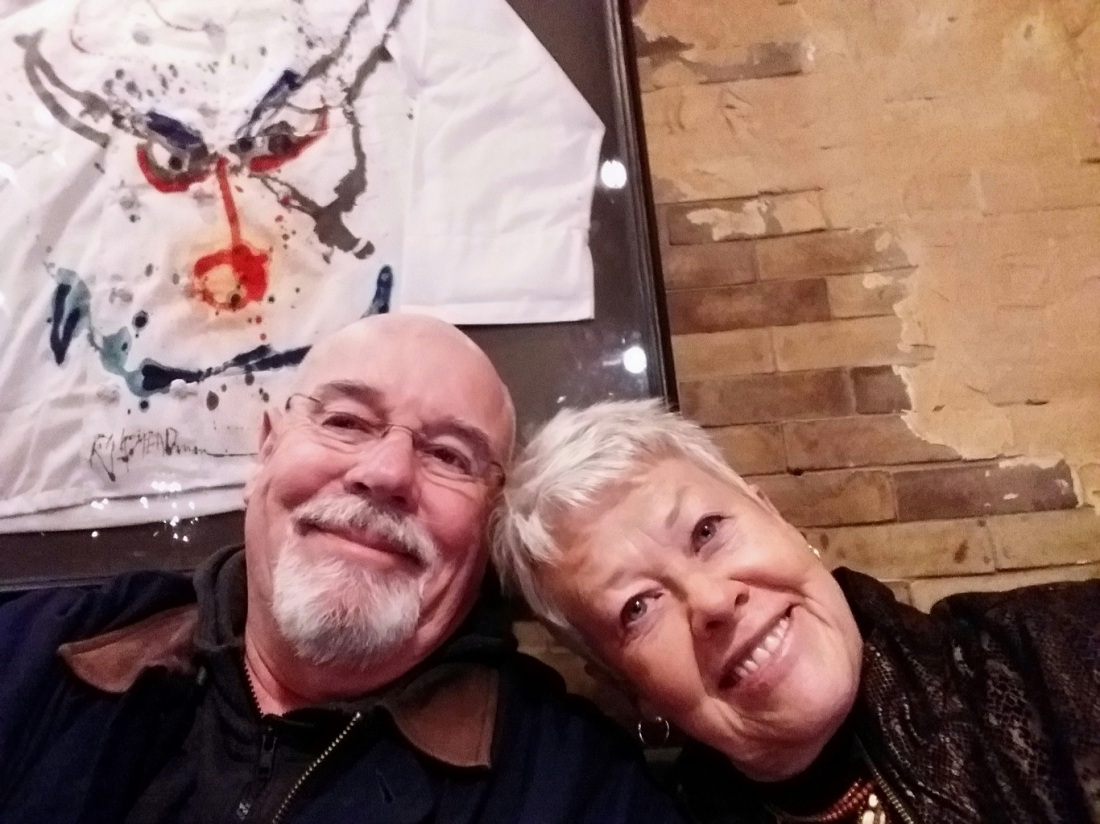 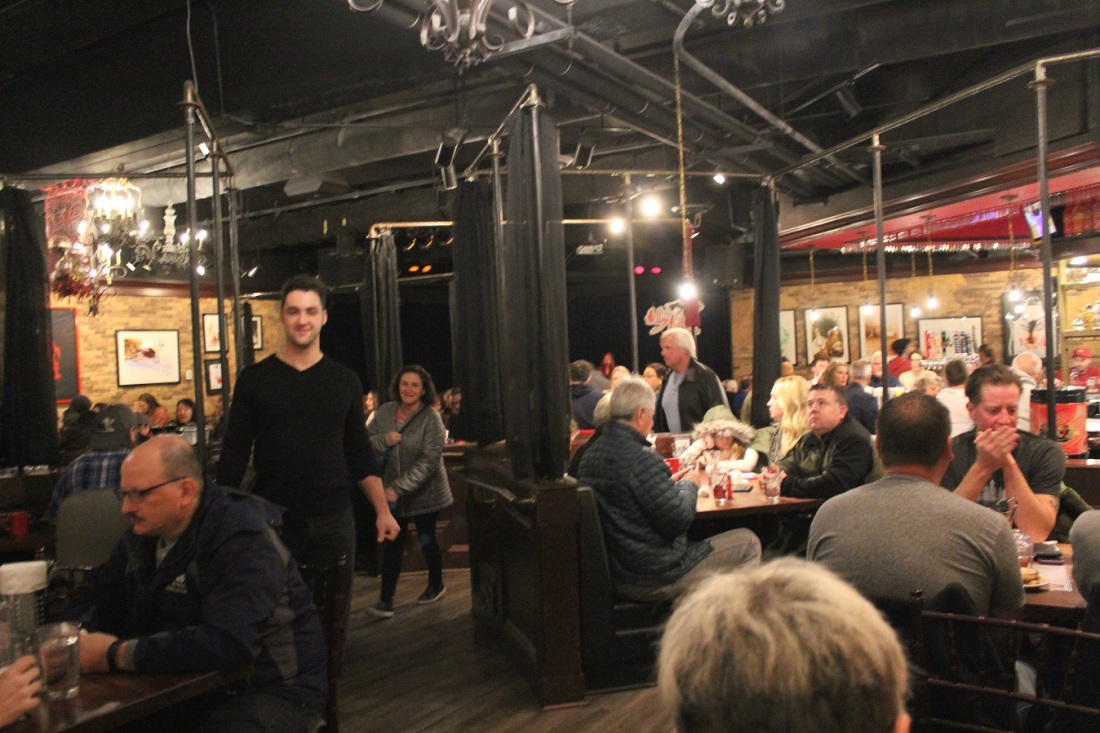 [I forgot to photo my Bison Benedict before it became partially engorged.  In the background, Cam ordered the daily special, a veggie omelet . . . ] 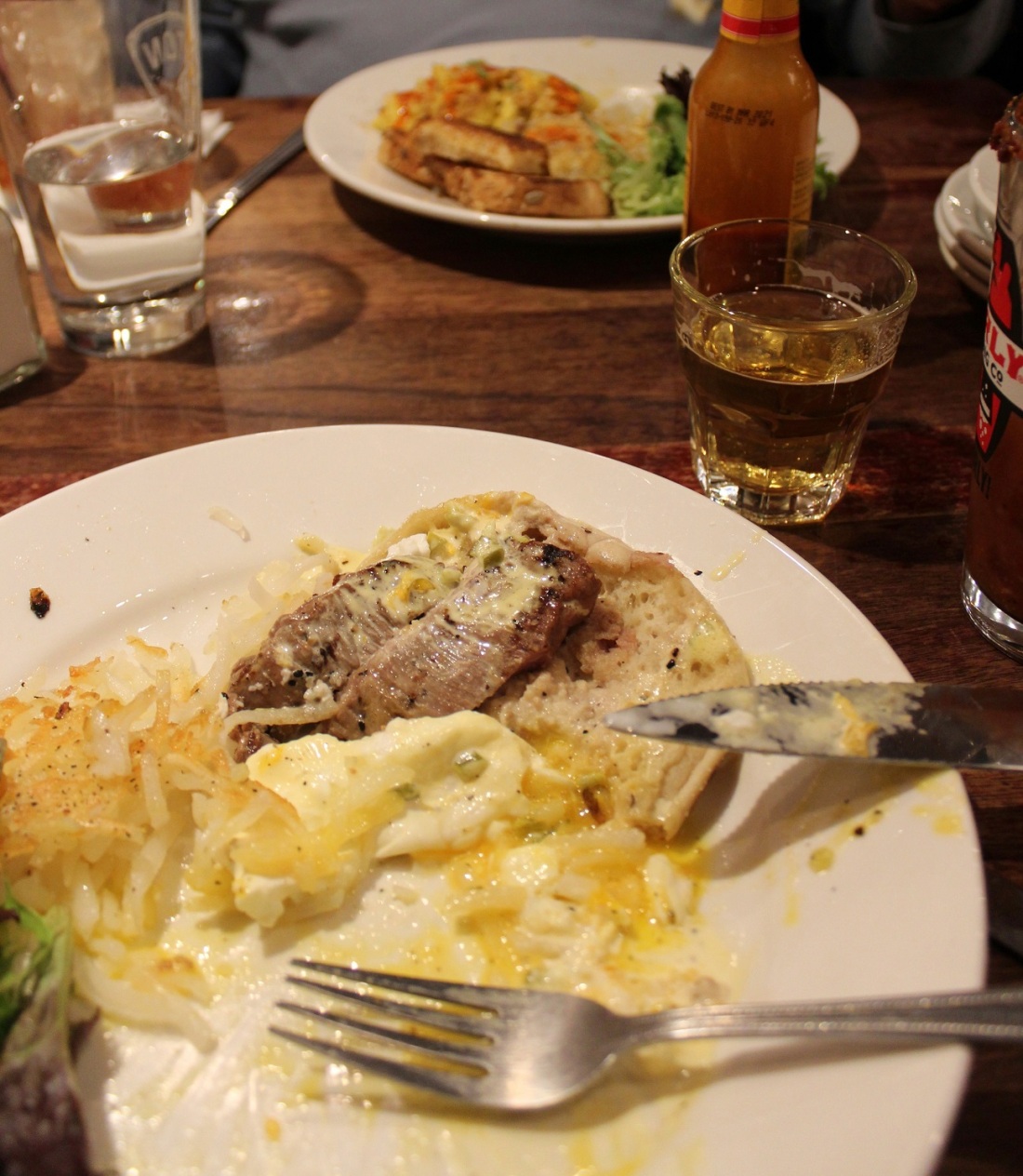 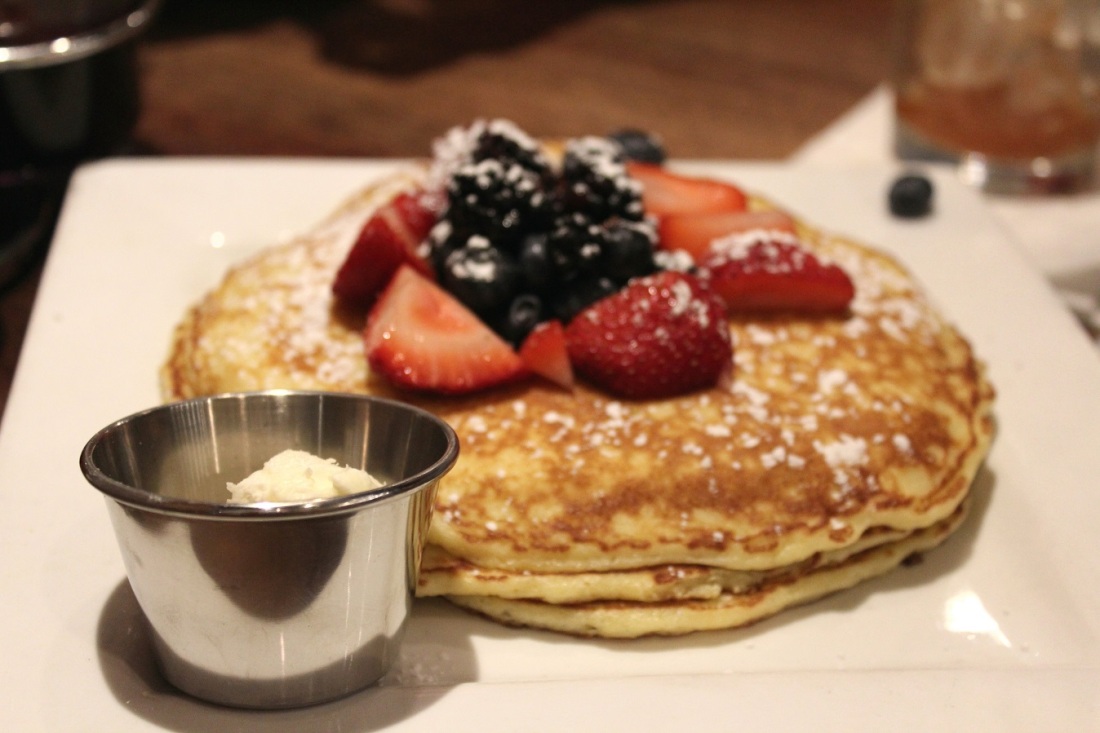 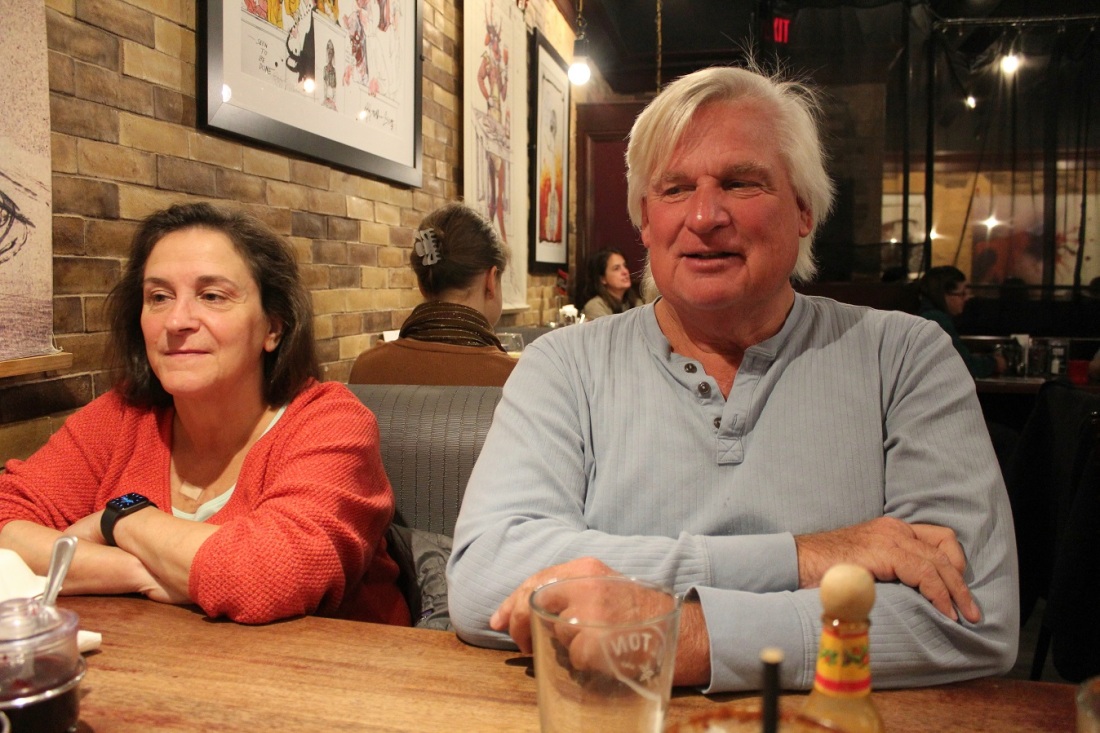 [Exactly one day after Cam’s birth.  A coincidence?  I think not!] 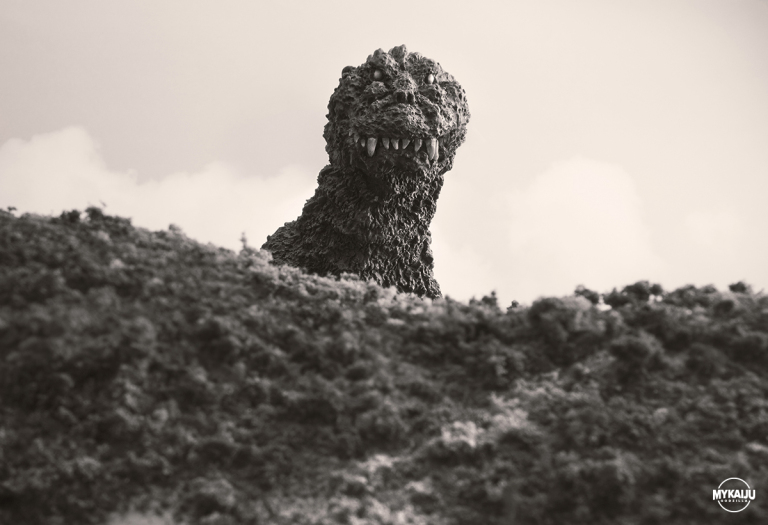 [I wanted to stay for the afternoon hockey game between our Gopher women (ranked #2) and Wisconsin (ranked #1).  But the weather forecast was for rain in the late afternoon and growing darker by night.  We cannot drive at night in the rain.  So, I missed this . . . ]

[OK, this was on the previous night at “Chaplin.”  A group selfie by Joe (right foreground) of Theatre L’Homme Dieu staff (Joe, Spencer and Sarah on the lower right), Nicole (TLHD executive director, above Joe), and assorted board members and groupies.  Saved this for last as the weekend highlight so it will be featured on the Facebook posting.]

Some problems are so complex that you have to be highly intelligent and well informed just to be undecided about them.  ~  Laurence J. Peter