Yes, the date of a Vikings playoff game, but I’d rather watch women’s hockey anytime.  It’s not that I’m not a Vikings fan, it’s that game itself is boring and the NFL is run by . . . well, take a gander at “Big Game” by Mark Leibovich . . . 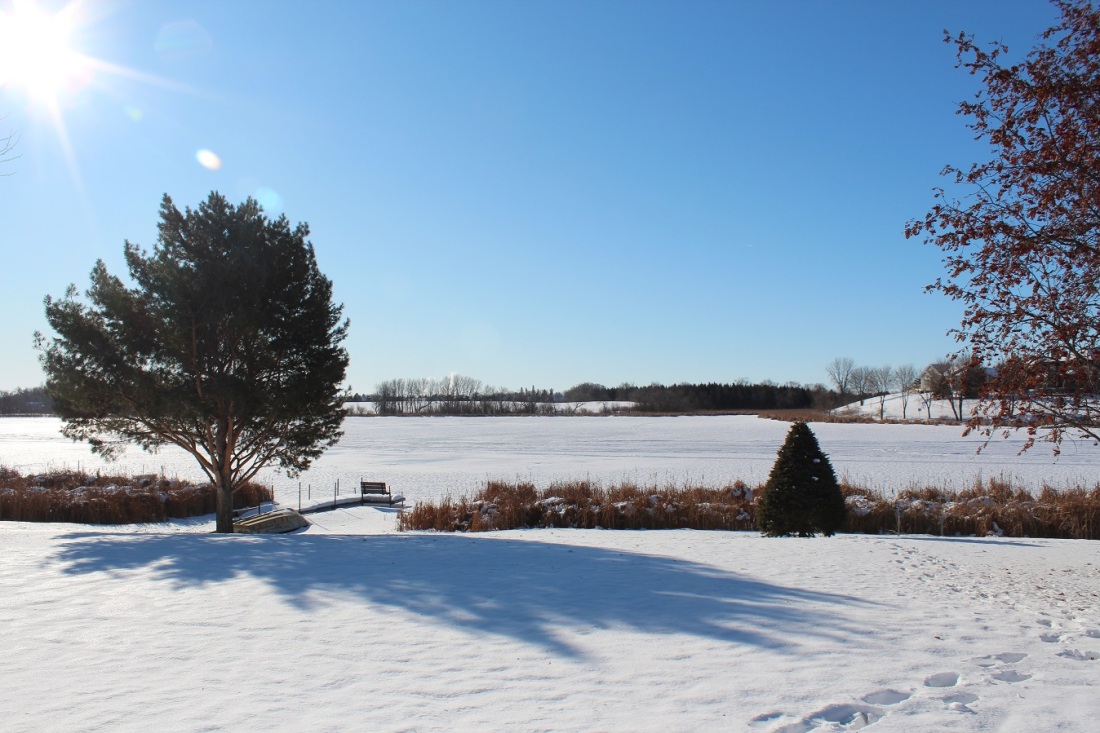 [With friend John Etnier (black coat), and his friend and former colleague Mike (blue coat)  from Edina, we gathered in St. Cloud, first lunching at RJ’s, before heading on to the Herb Brooks National Hockey Center.  It looks surprisingly benign here because we were only one parking lot lane from the building – behind us where we parked was an ice field as generally throughout this whole area this winter ice has been a major issue, particularly for pedestrians . . . ]

[I did not come here to disparage the Vikings, only to note that my favorite spectator sport is girls high school hockey.  This is another level up, but the Gopher women’s hockey program has been the one statewide athletic program that year in and year out takes a back seat to no one.  The Gophers are currently ranked No. 2 in the country . . . ] 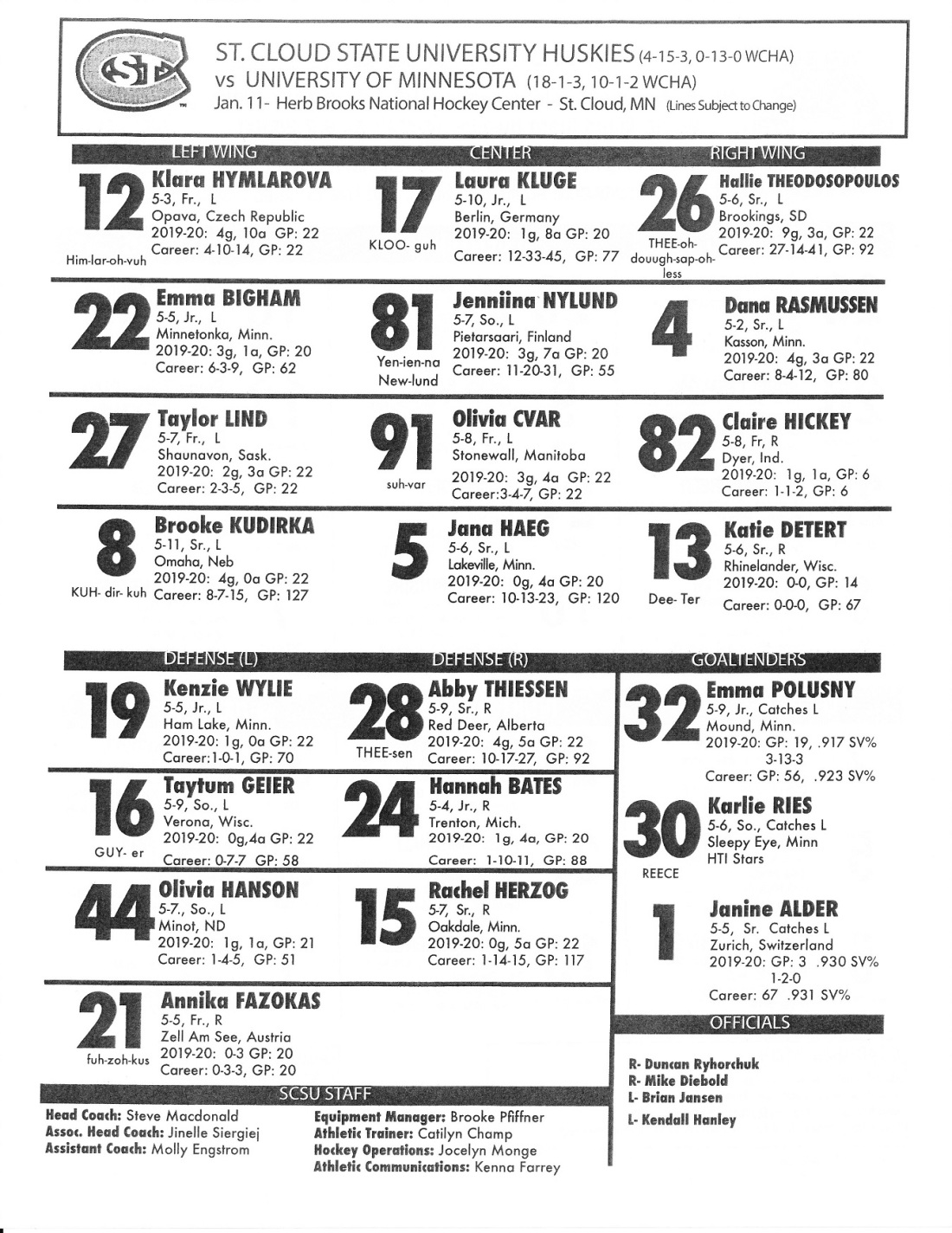 [John is a native Twin Citian, but he colleged at St. Cloud State where as you can see here he is a member of the Huskies Hockey Wall of Fame.  Back in the mid to late 60’s, the equipment was not quite up to modern standards, but to the best of my knowledge John still has all his teeth . . . ] 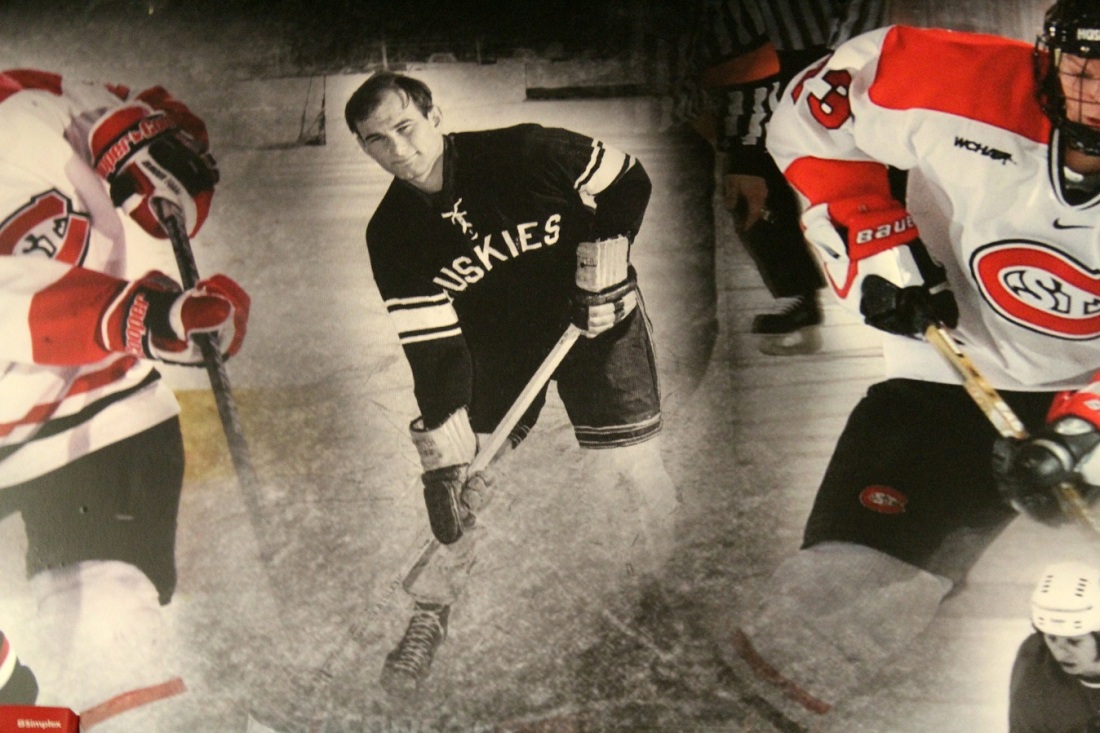 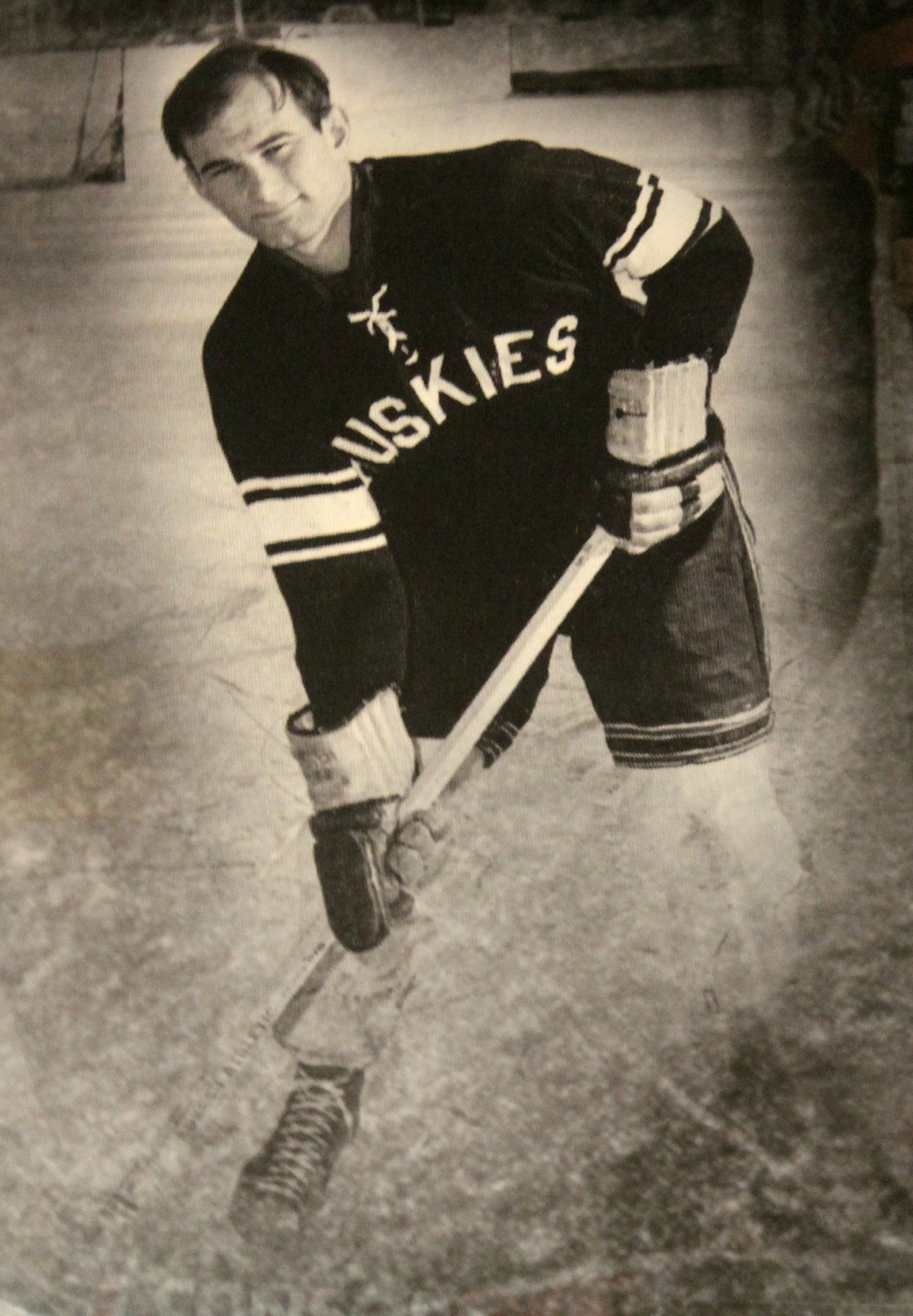 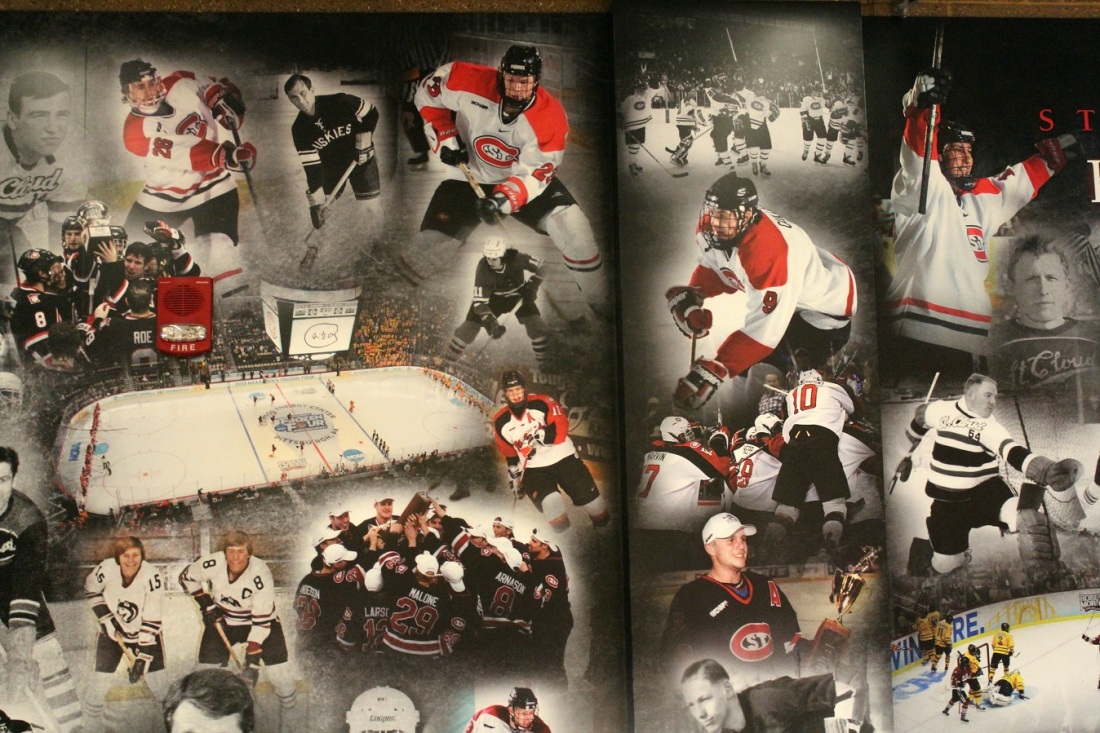 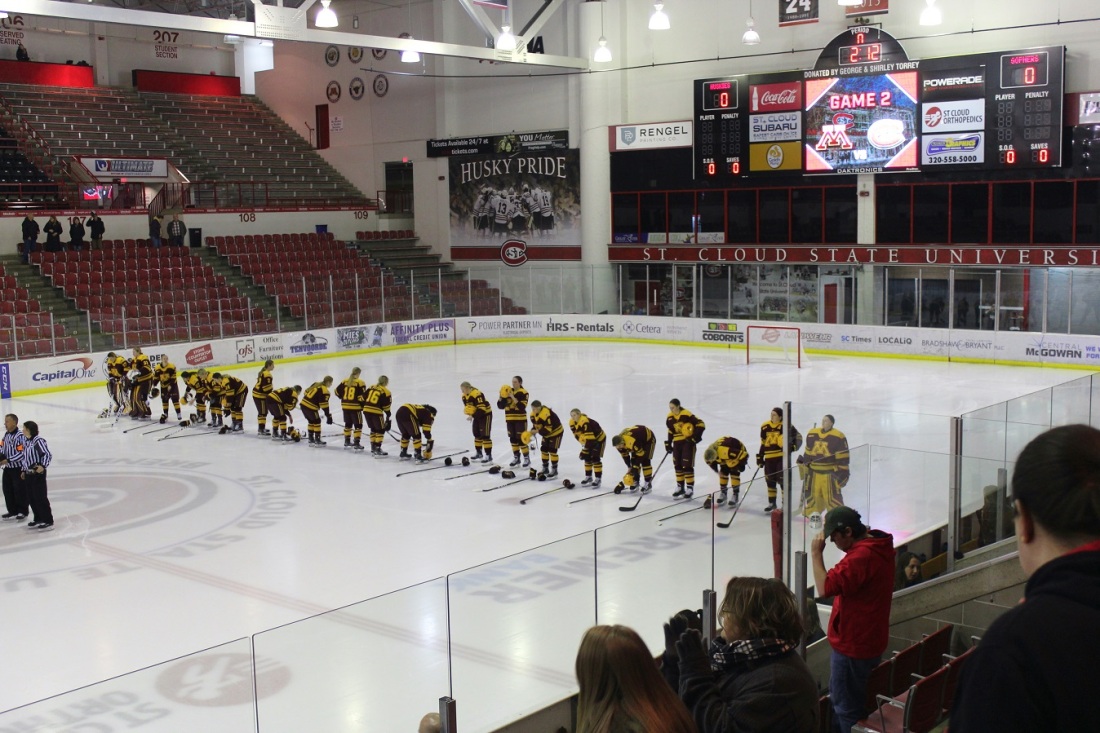 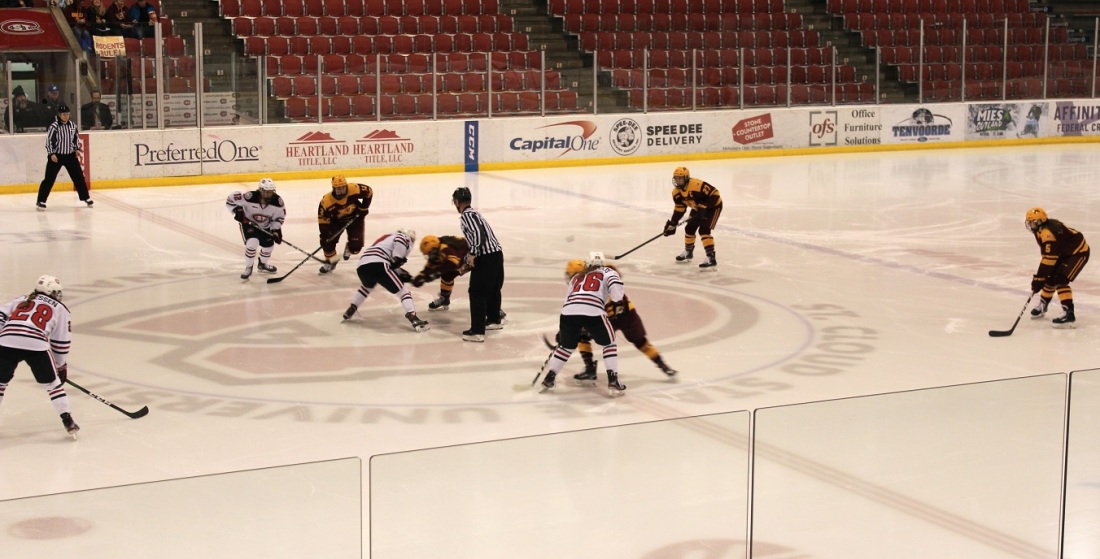 [The Gophers won the draw which appeared to have split their defensemen . . . ] 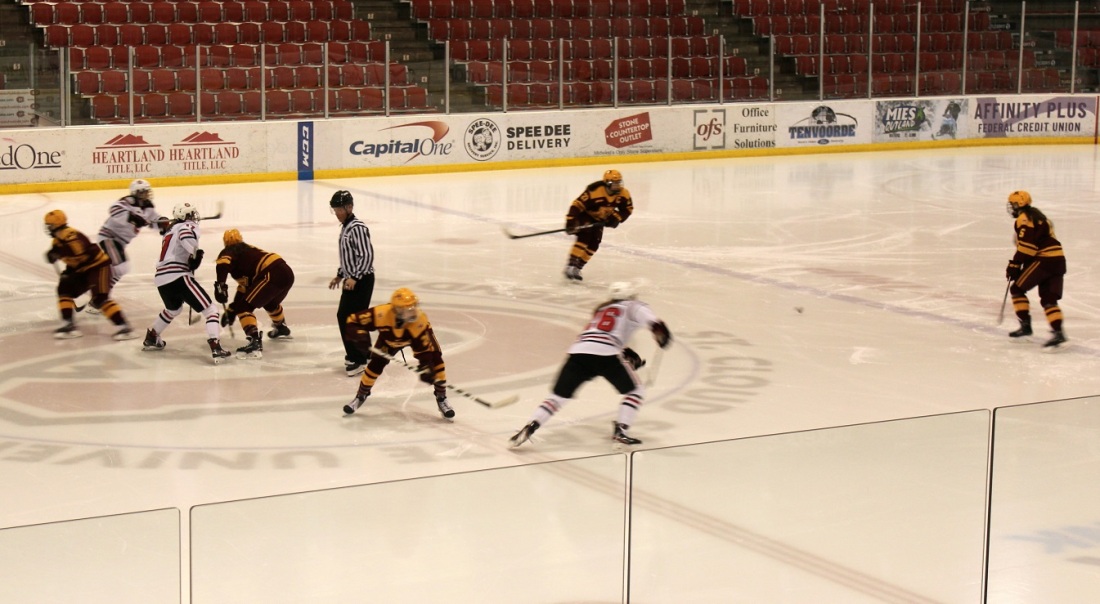 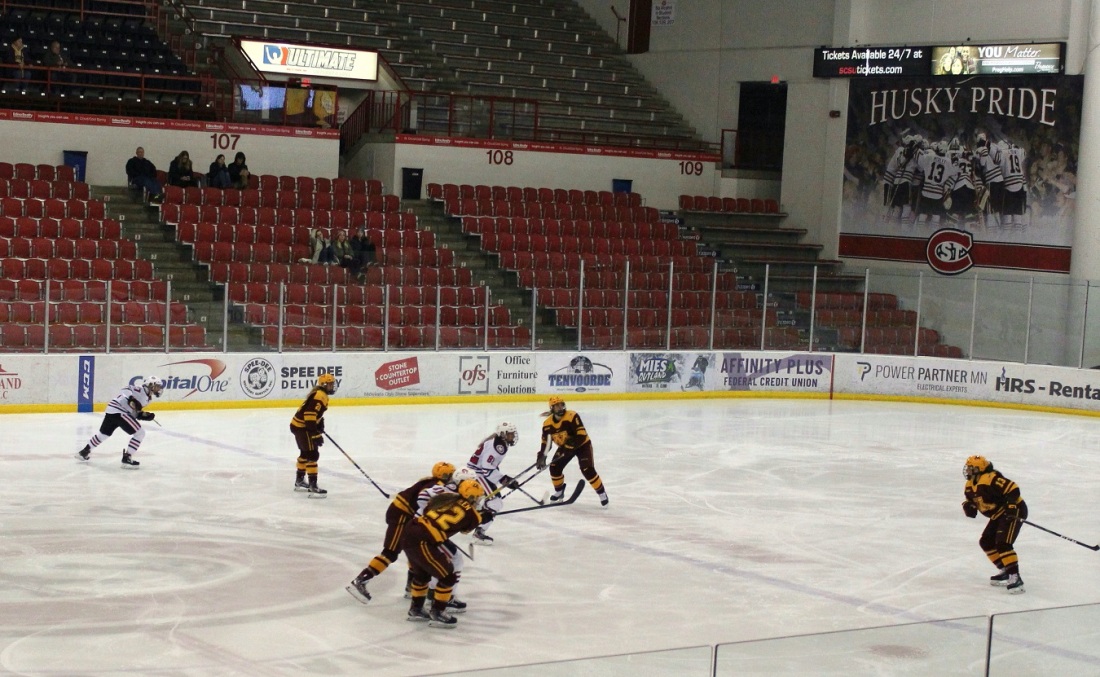 [Sarah Potomak (26) is a senior forward from Aldergrove, British Columbia, and Madeline Wethington (5) is freshman defenseman from Blake.  Madeline scored the 1st goal of the game just 3 1/2 minutes into the game . . . ] 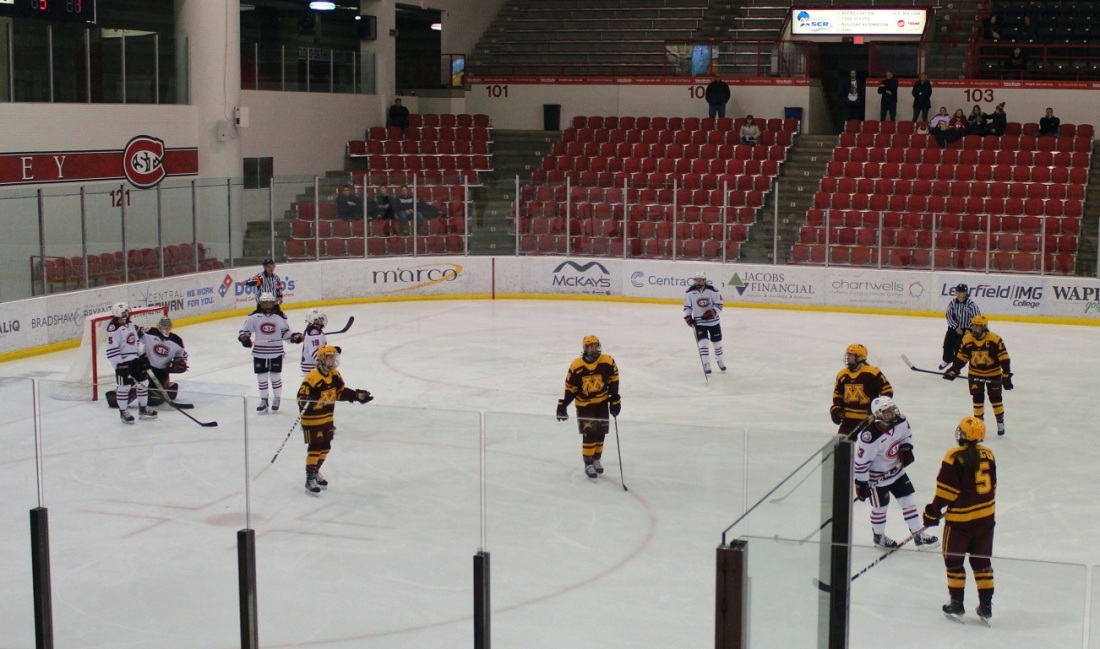 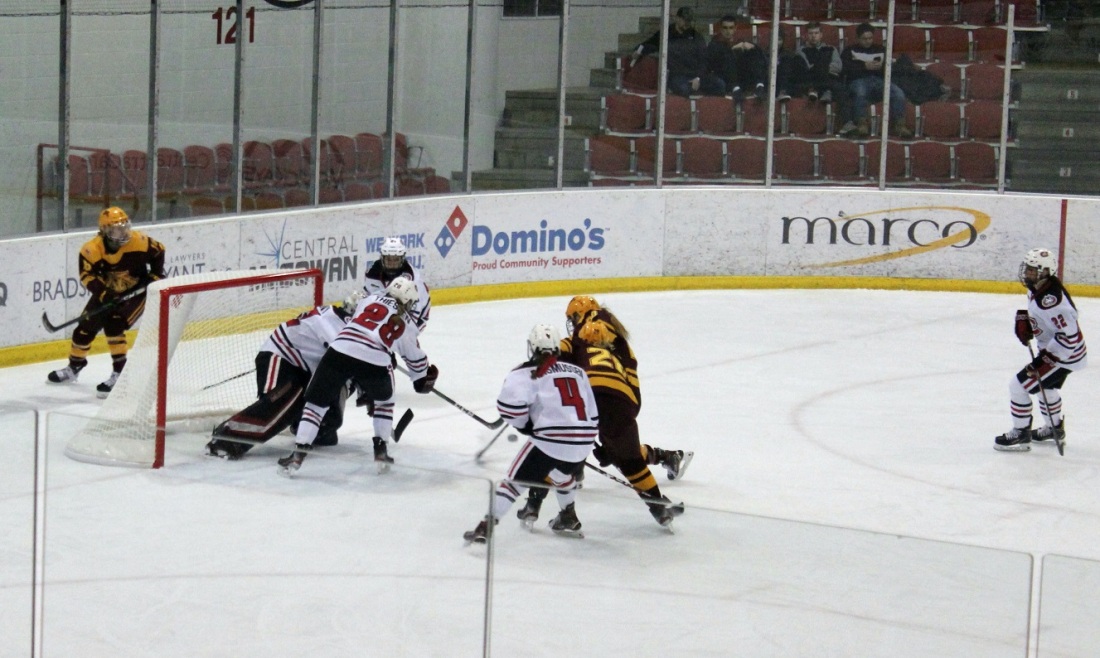 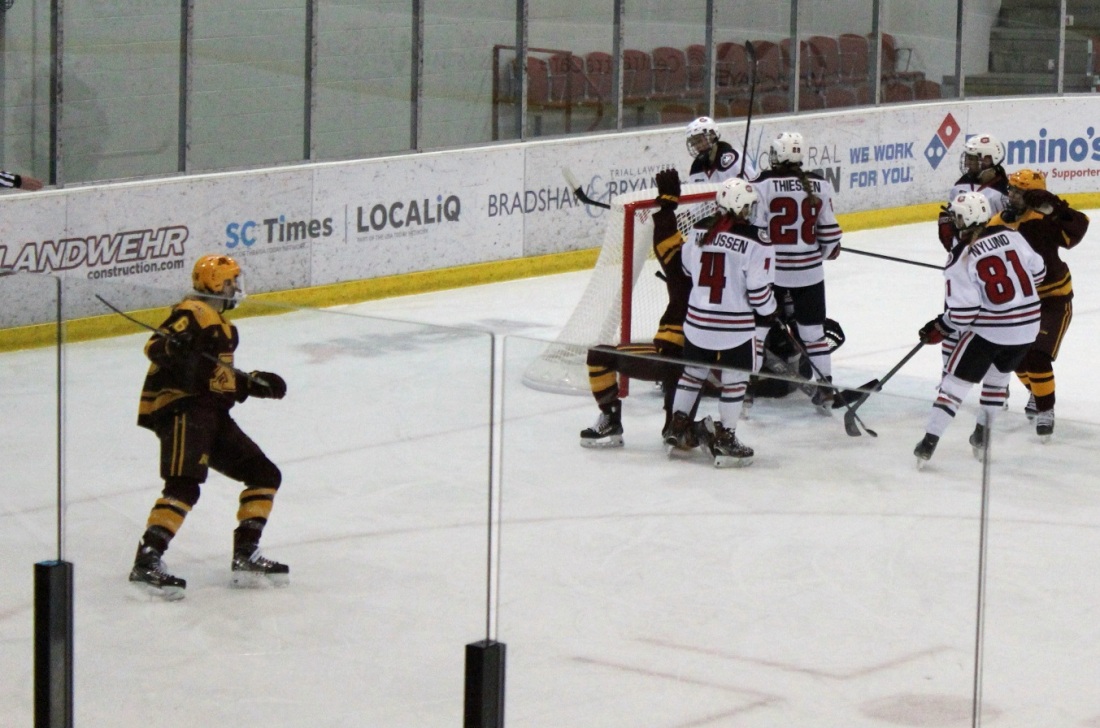 [Then I somehow missed the power play goal by Taylor Heise (9), a sophomore from Red Wing.  That 3 – 0 first period score would stand up as the final score . . . ]

[Mucking it up in the 2nd period, Gopher goalie Sydney Scobee, a senior from Breck, in the background . . . ]

[Something learned between periods is that both John and Mike, as ex-college hockey players, mow their lawns in a Zamboni pattern . . . ] 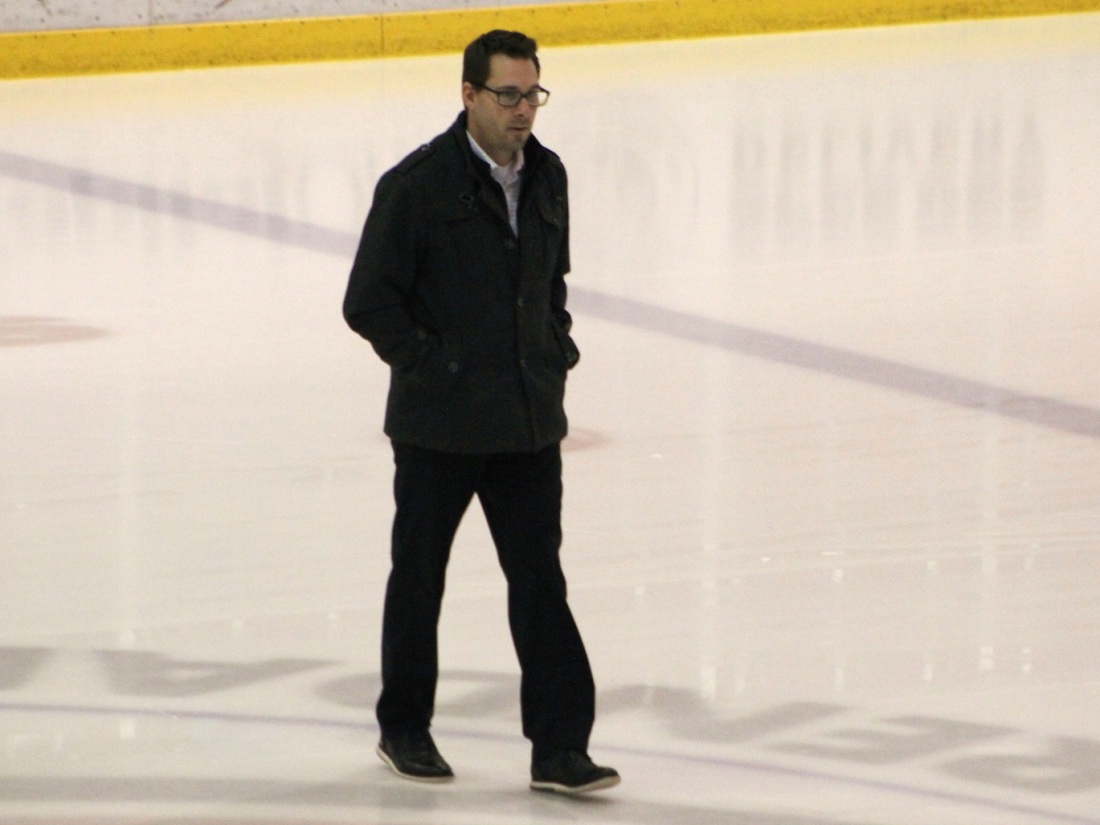 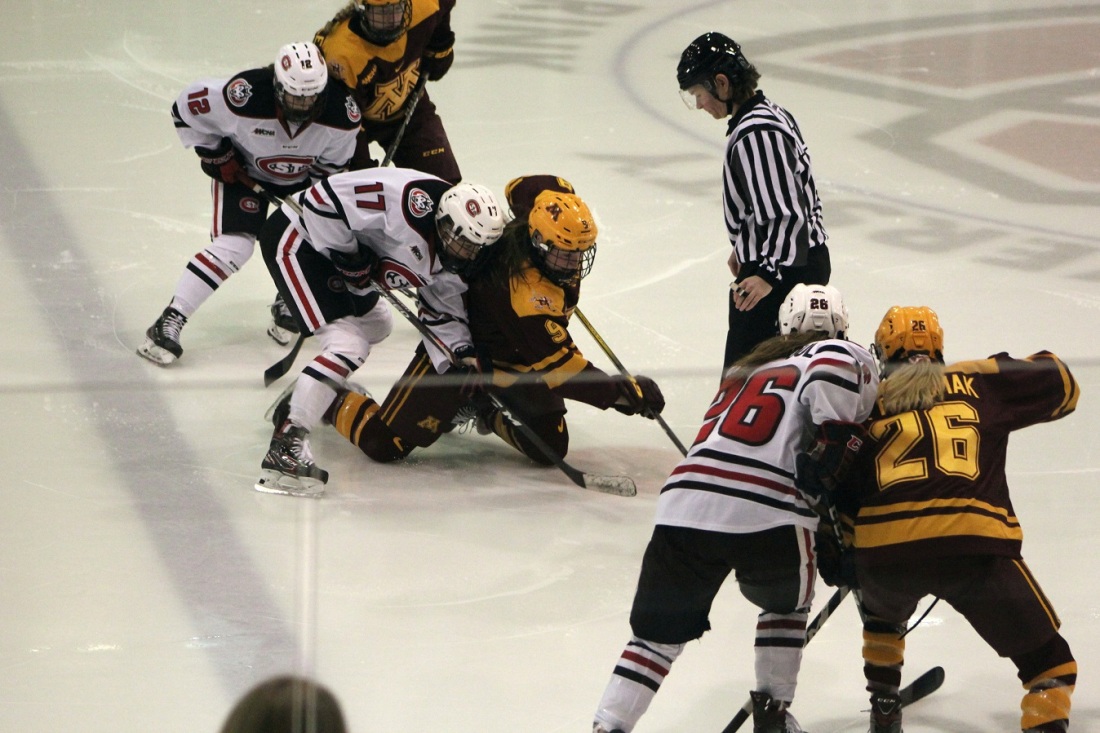 [Although all the Gophers are obviously very good, Grace kind of jumps out you with her size, speed, and shot (in her high school days, considered the hardest in the state . . . ] 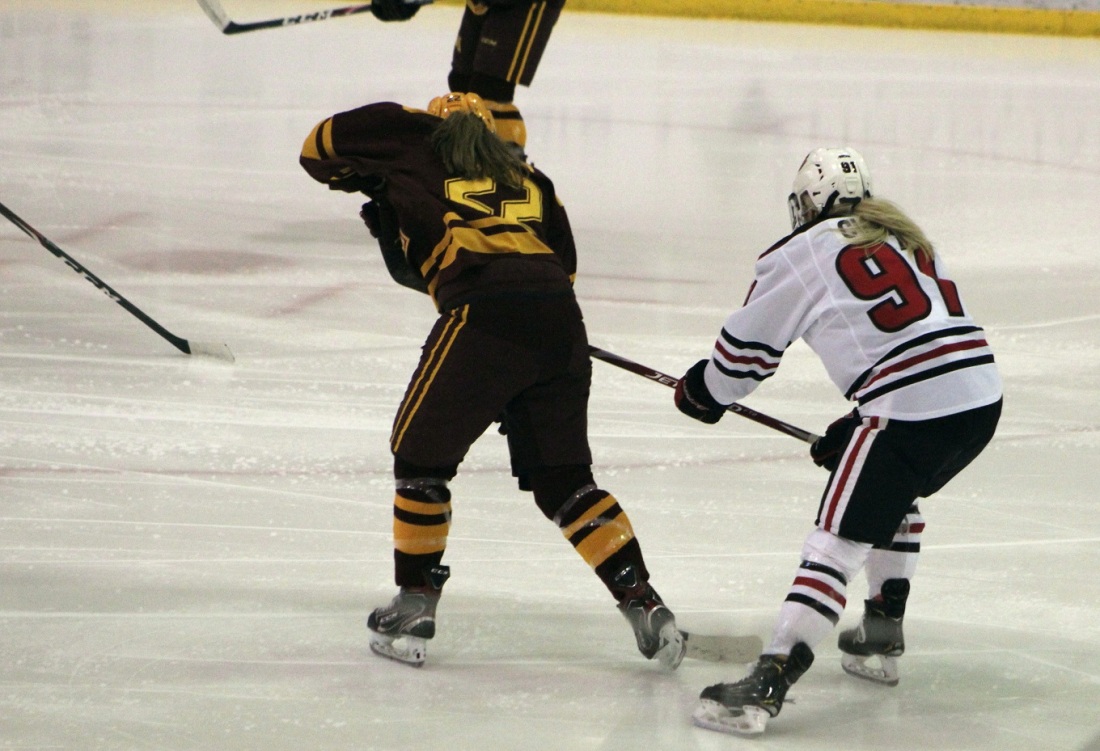 [Abigail, Emily Oden (21), a sophomore forward from Edina, and a friend pound the net while Emily Brown (2), a junior defenseman from Blaine, lurks in the background . . . ] 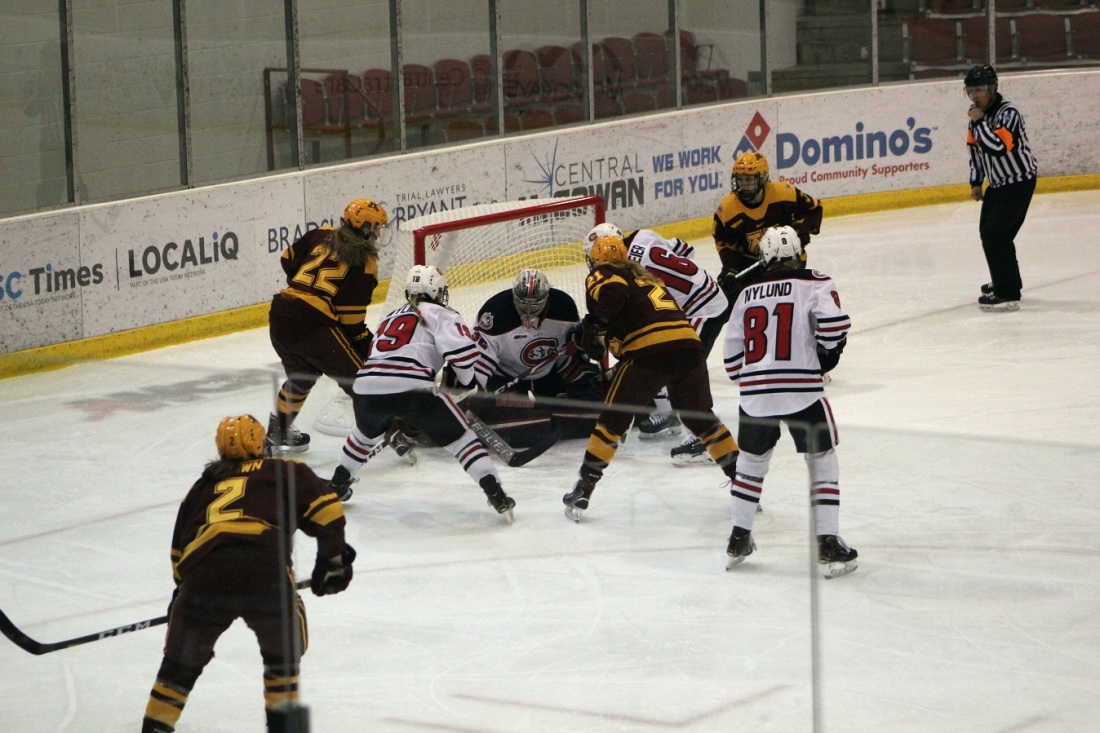 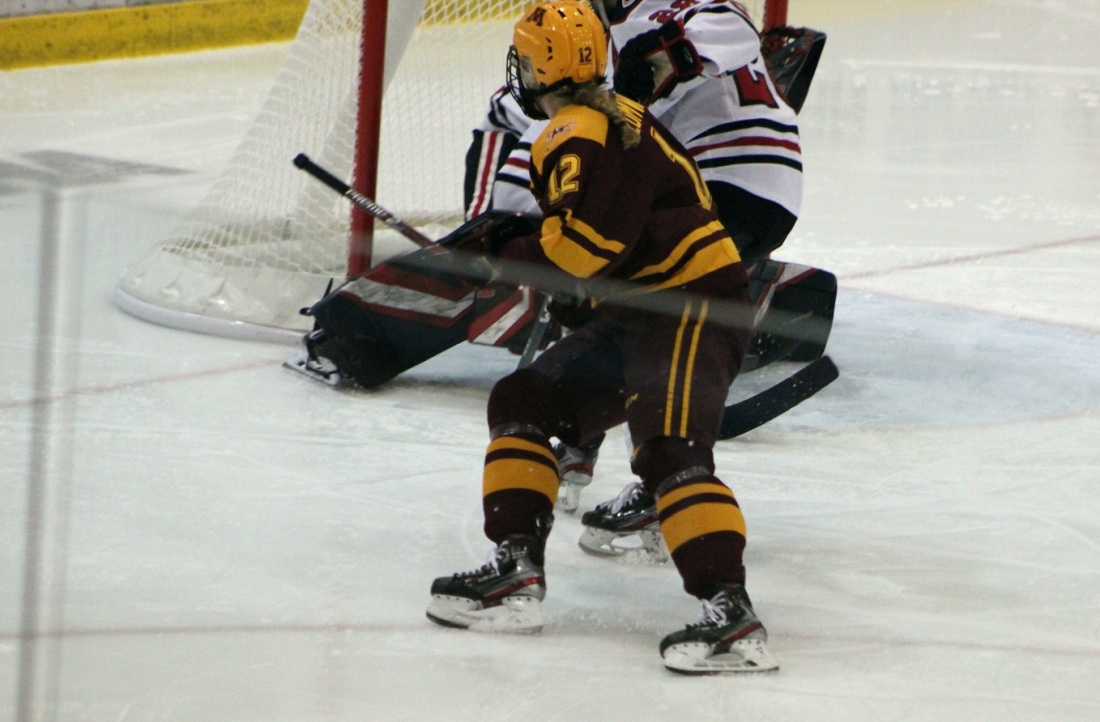 [The Huskies goalie is Emma Polusny (32), a junior from Mound.  I’m sure our Cardinals played against her in high school, probably more than once . . . ]

[Olivia Knowles (24) is a junior defenseman from Campbell River, British Columbia, and Taylor Wente (28) is a junior forward from Maple Grove . . . ] 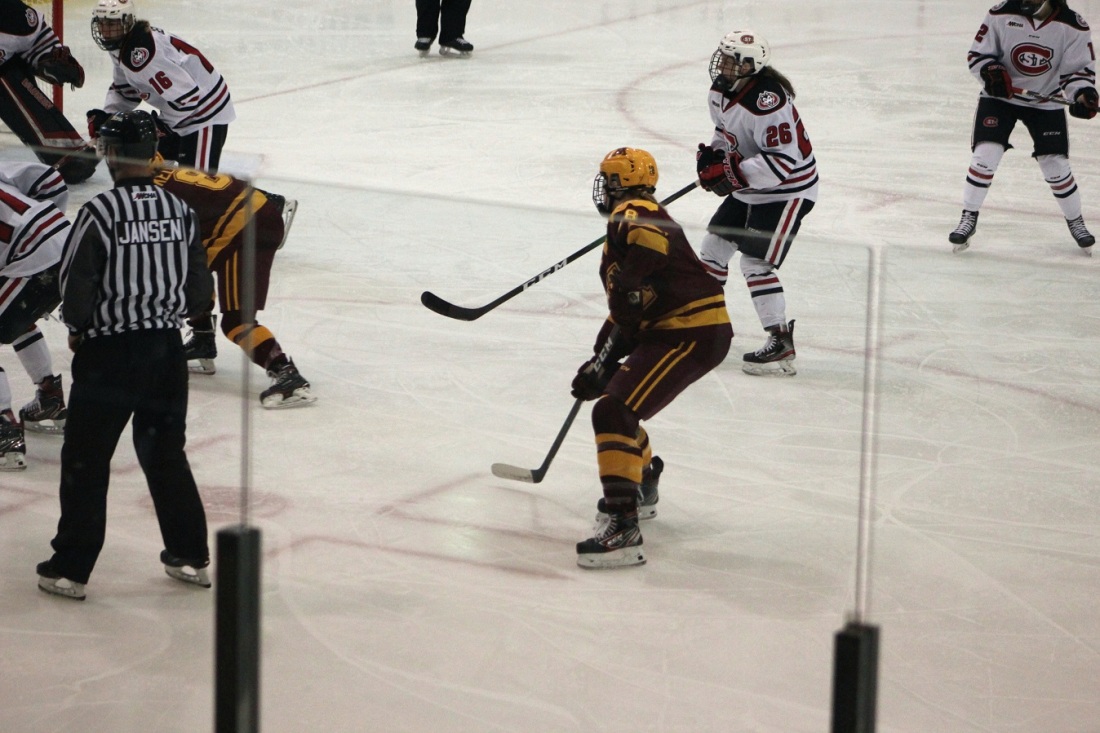 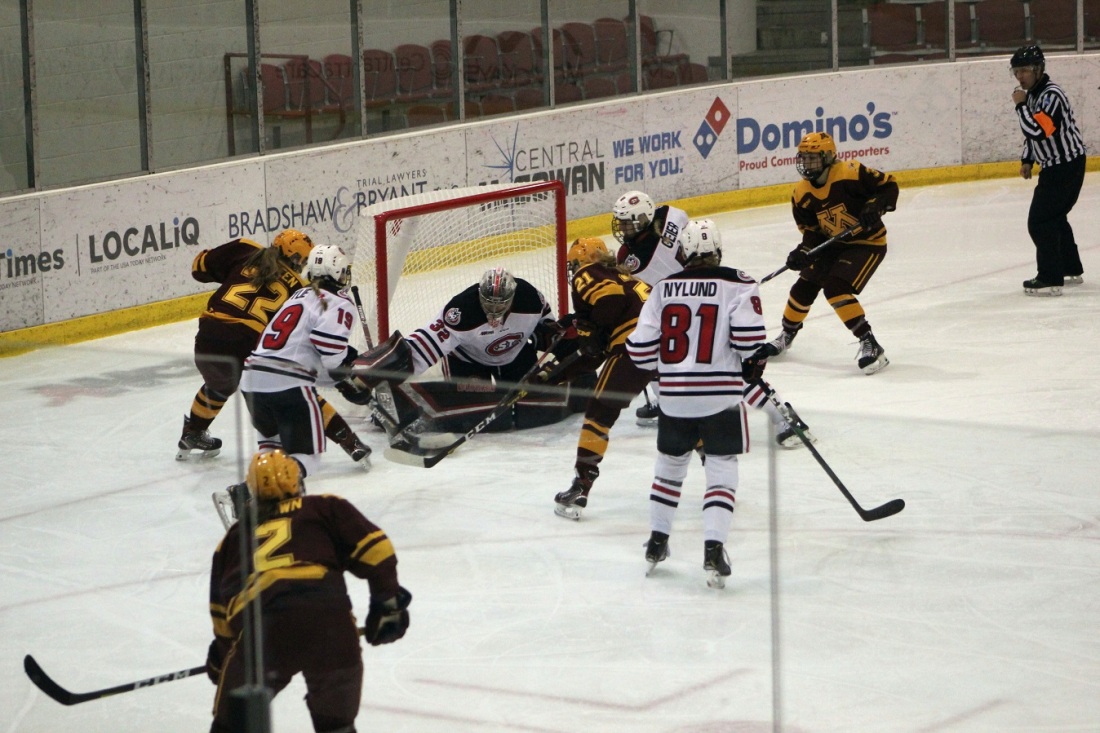 [And another multi-player pile up in this non-contact sport . . . ]

[And there’s Abigail again.  Watching the game I didn’t realize how much time she spent hanging around the net . . . ] 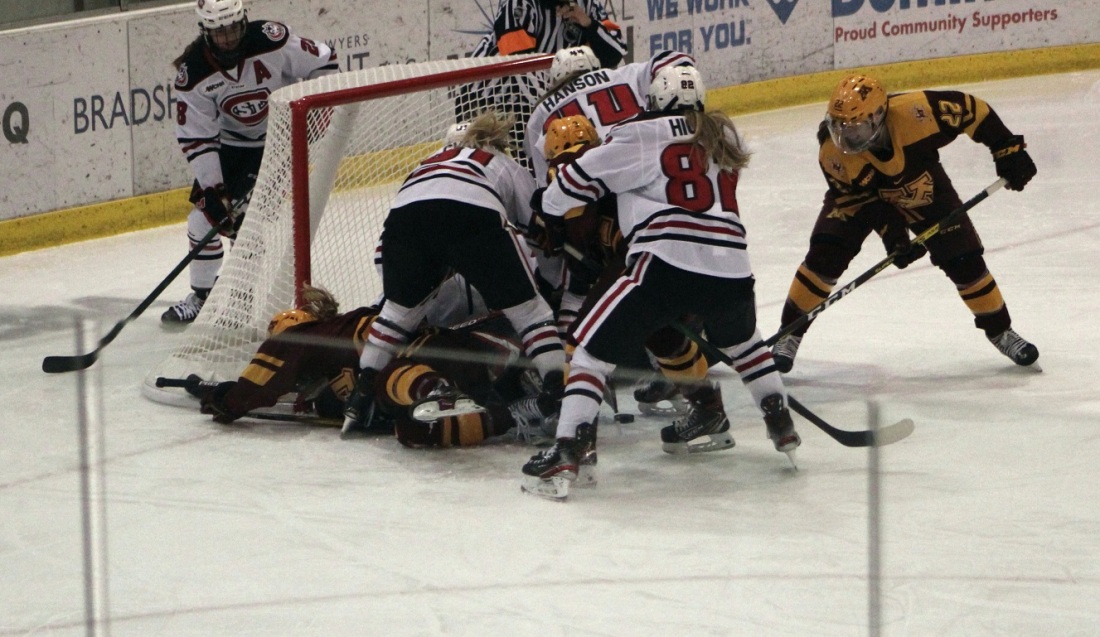 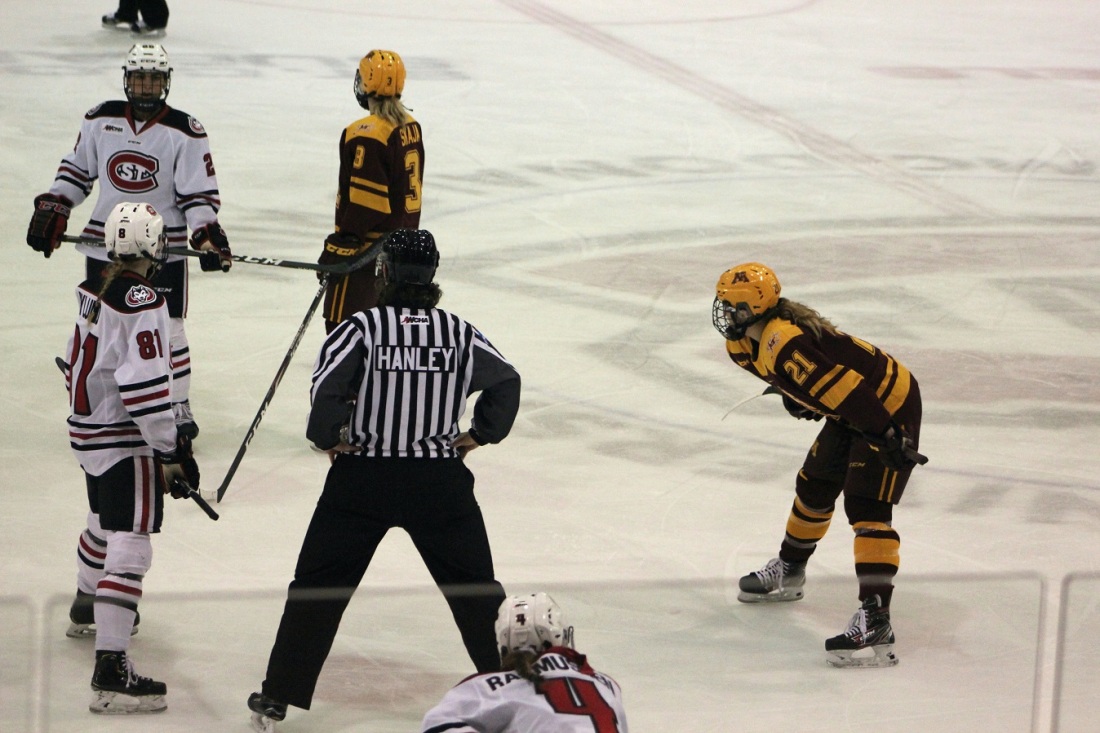 [Time to say Goodnight, Folks.  I’m kind of amazed that in just random shooting I covered every player (I think?) . . . 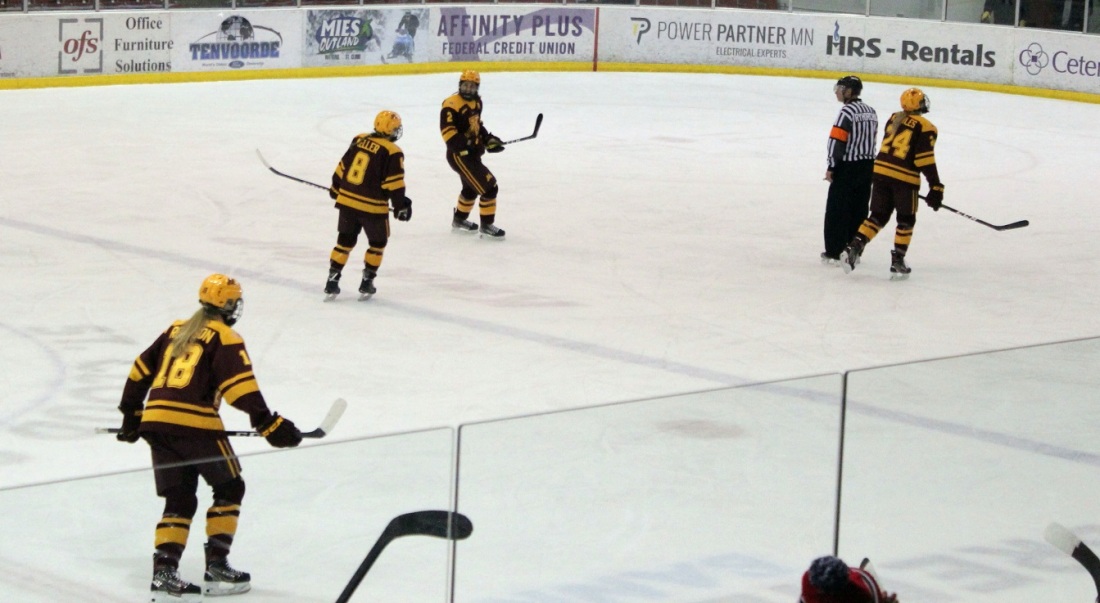 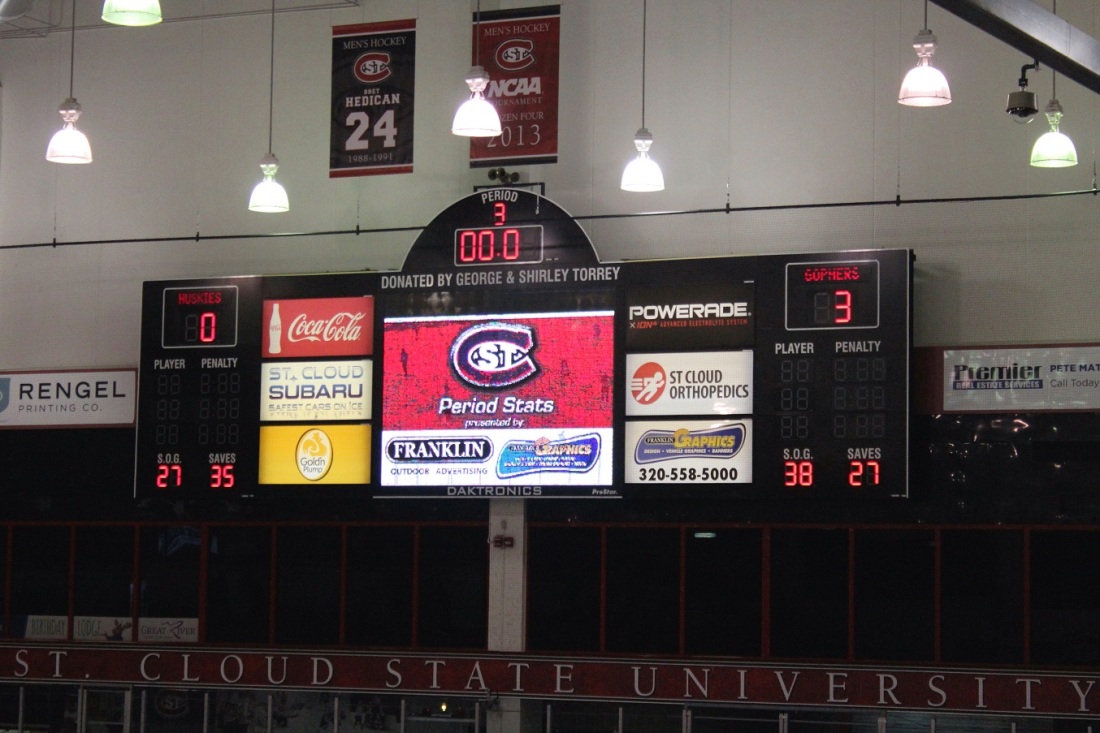 [Takeaways:  The Huskies aren’t as bad as their record.  Plus, they’re really interesting – looking back up at their roster, it’s very international in nature.  The Gophers weren’t strikingly good, but we were looking at them through the lens of previous teams – specifically the 62-game winning streak teams between February 2012 and November 2013.  I went several games during that great era (through 2016) when the team was loaded with Olympians.  Finally, both John and Mike (who played hockey at Mankato State) agree (as do I) that where the Gophers play, Ridder Arena, is the ultimate hockey venue . . . ]

Goaltending is a normal job, sure. How would you like it in your job if every time you made a small mistake, a red light went on over your desk and 15,000 people stood up and yelled at you?  ~  Jacques Plante

Up Next:  More games tomorrow night