‘Twas another day of multiple home games: a girl/boy basketball doubleheader versus Moorhead, and a girls hockey game versus Fergus Falls.  I began with the idea of going first to the girls basketball game and then catch as much as of the hockey game as I could . . .

[The pre-game meeting with referees and team captains, to include occasional hair maintenance.  As sometimes happens, a technical glitch led to a solo performance of the National Anthem by the ref on the left.  He was excellent . . . ]

[The Cardinal braintrust of Wendy and Julie . . . ]

[Partners for more years than they likely want to think about – but somewhere around 620 wins . . . ]

[I sat on the teams’ side of the court this time.  JV games were taking place on the court usually covered by the west bleachers . . . ]

[Pre-game discussions, not to include shoe contracts . . . ] 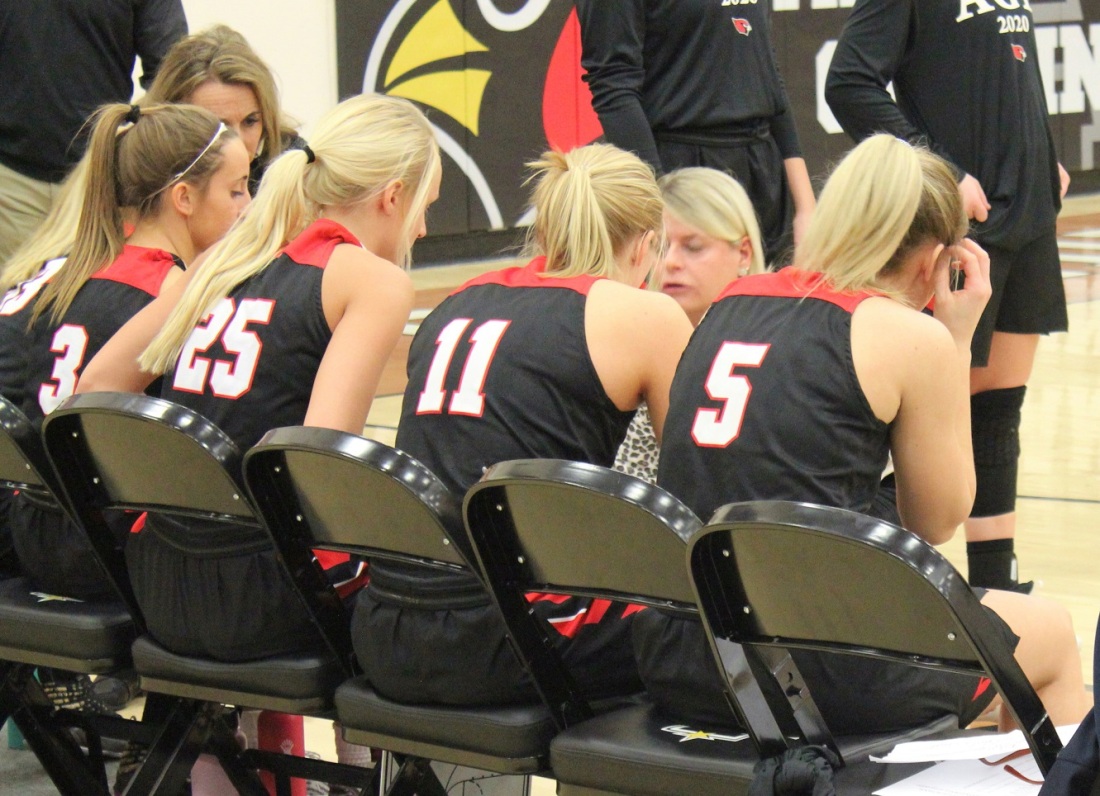 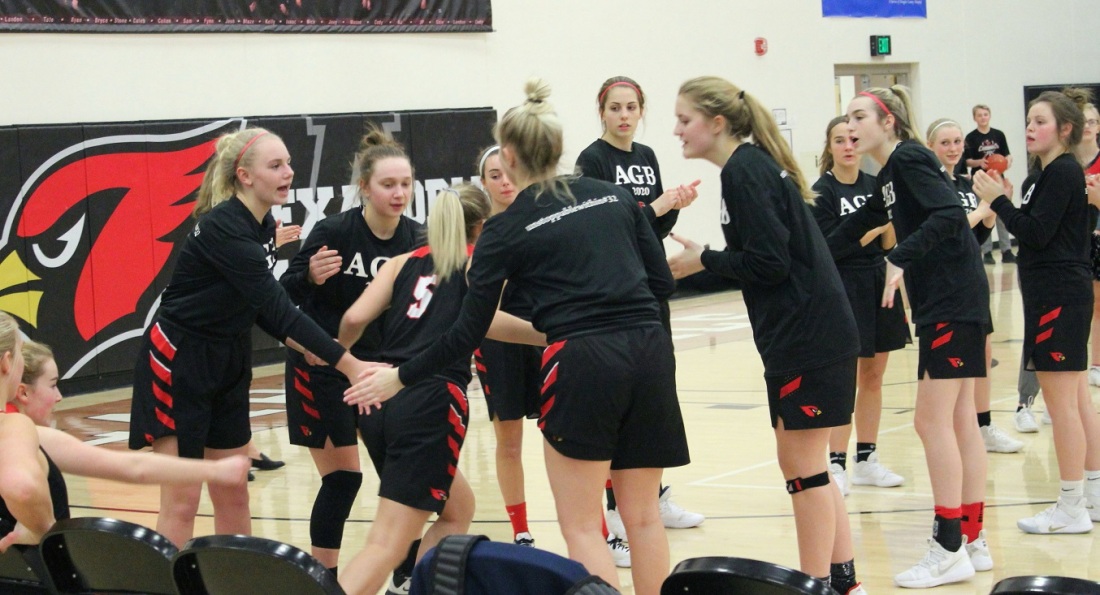 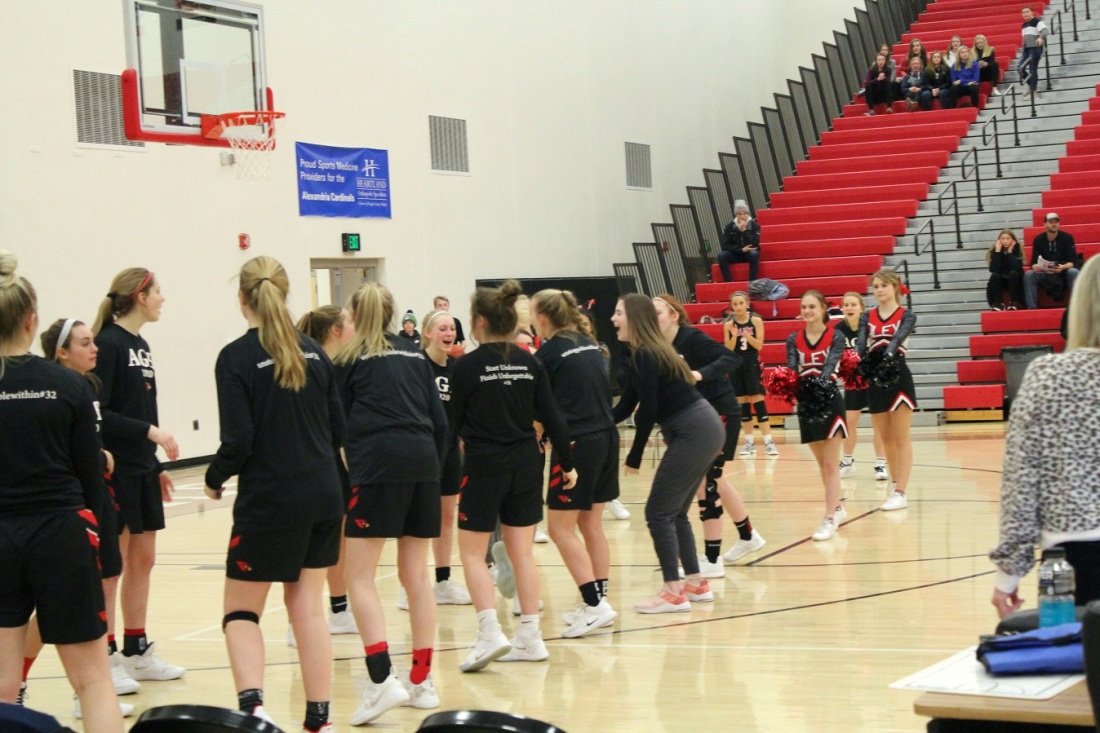 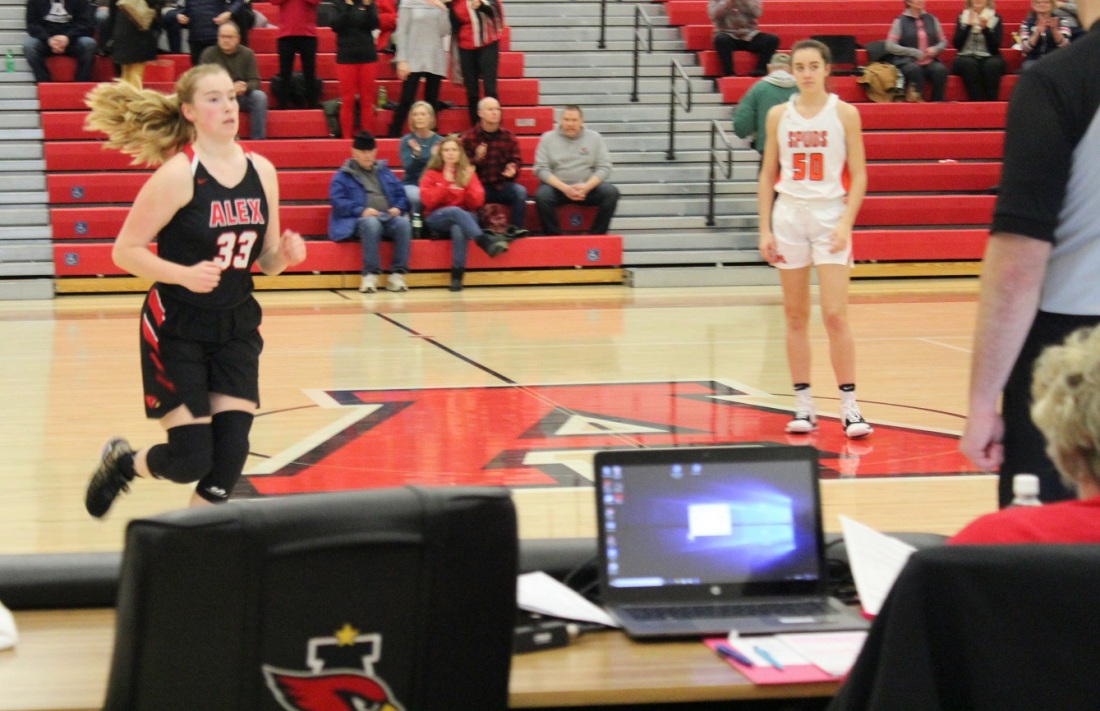 [And off.  This was a game in which the Cards got off to a bad start that got worse.  There are times for all teams when they can’t throw the ball in the ocean while standing on the beach.  This was one of those games.  Leading scorer Ella got two early fouls and sat out most of the half.  The Spuds tall guards gave us problems, leading to many pass deflections and turnovers.  The Cards made no 3-point shots in the half (as I recall), the Spuds made 5.  The Spuds led 28 – 13 at the half.  I made a management decision to leave then to catch the entire hockey game . . . ] 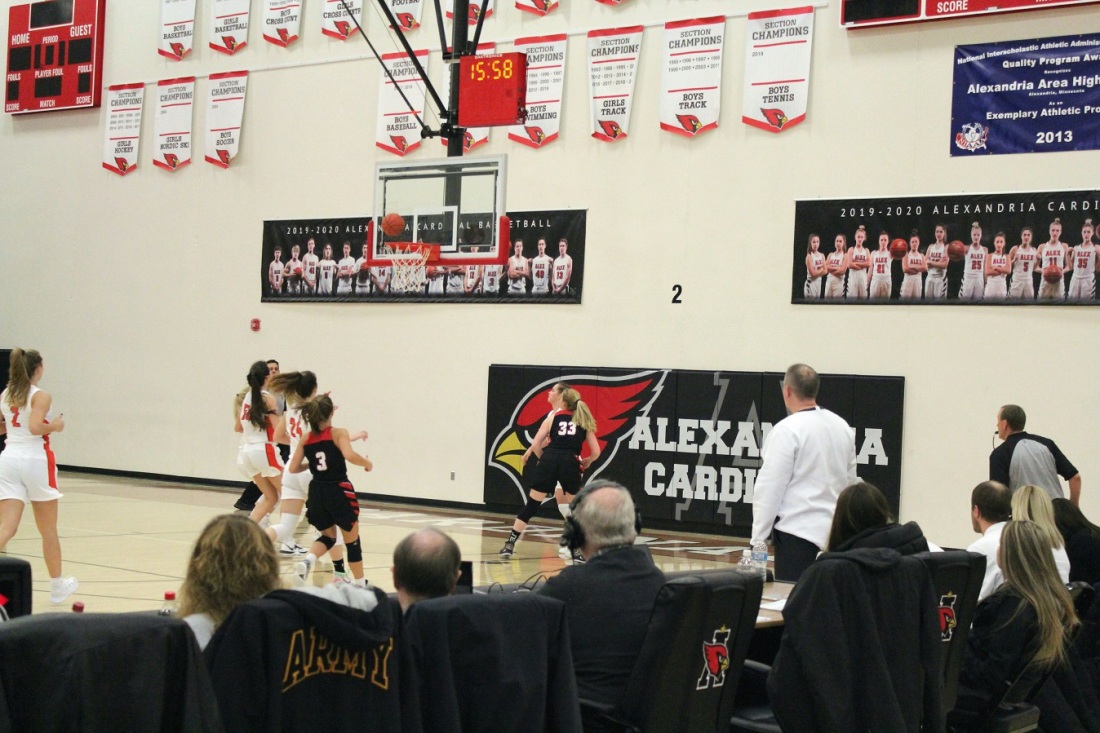 [A real plus for the Cardinals, however, was the play of Summer Gerhardt (35).  She’s has not played a lot this year because of an injury that until this game required she wear a big leg brace that limited her mobility.  She came in off the bench and started the Cardinal scoring.  She is strong enough to mix it up and score inside (she is also a shot putter and discus thrower).  I think her inside strength and athleticism, and senior leadership (with Mia and Ella) will be key as to how far this team can go . . . ]

[Mia battled here, with Summer underneath.  The team played much better in the 2nd half and made a ran at it . . . ] 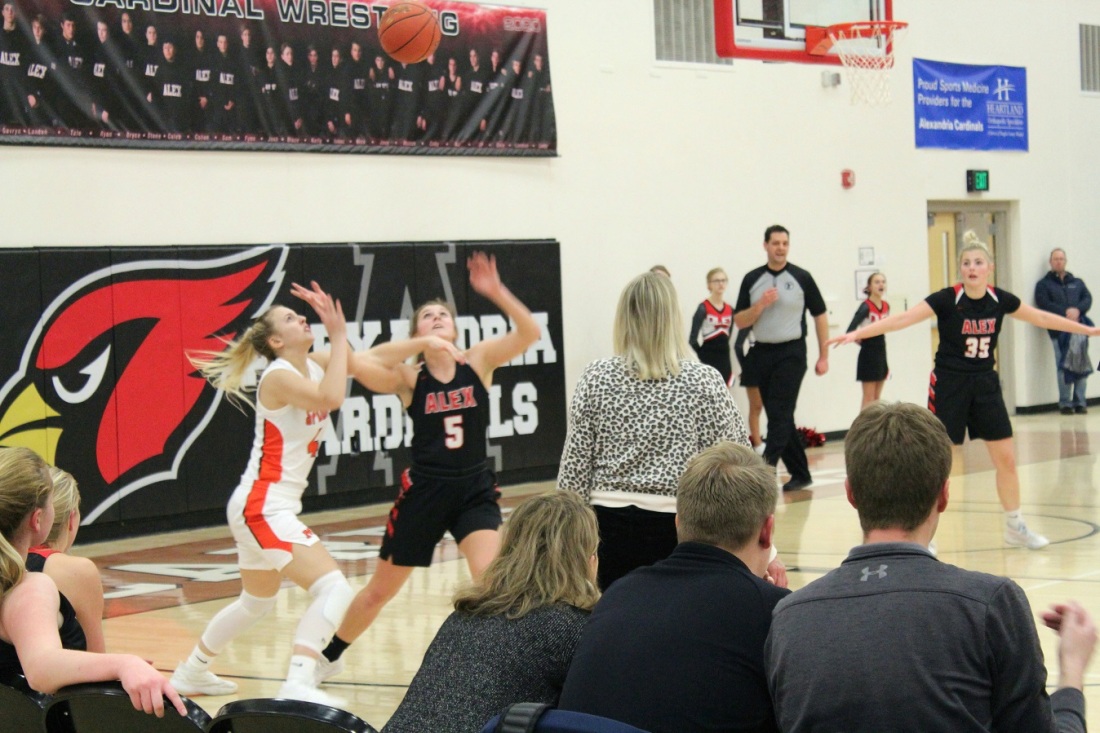 [I usually reside with them, but I was looking for a different angle.  I did join the boys, and photographer Mark Ripley (on the right), for the 3rd period . . . ] 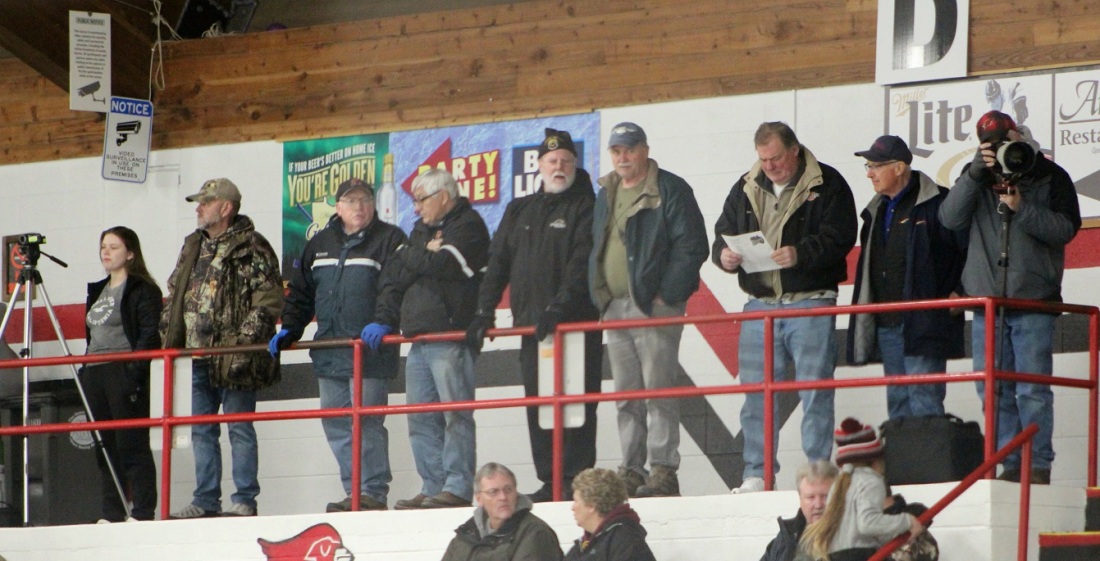 [The Cards were hoping to duplicate their earlier 5 – 0 victory at Fergus.  Here’s Kaci Trosvig (25) who played a major role in making that happen (you may recall her sister Kristin was twice (I believe) named to the state all-tournament team) . . . ]

[And another freshman Ella Westlund (19), who has two older brothers who played and play . . . ]

[Someone or something tickled Lauren’s funny bone . . . ] 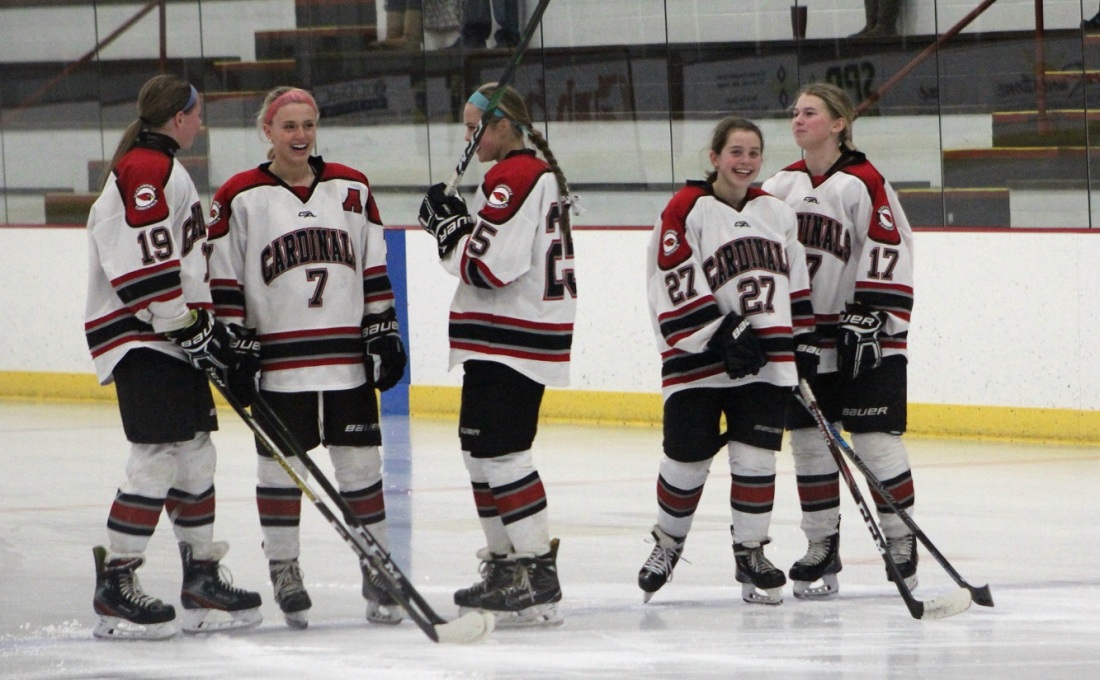 [And sophomore Hailee Bailey (35) makes a junior, three sophomores, and two freshmen meaning unless they turn pro they’ll all be back next year . . . ]

[The Cardinals scored first on this foray when the puck came out to senior Mayson Toft (14) who scored on a strong shot from the point . . . ] 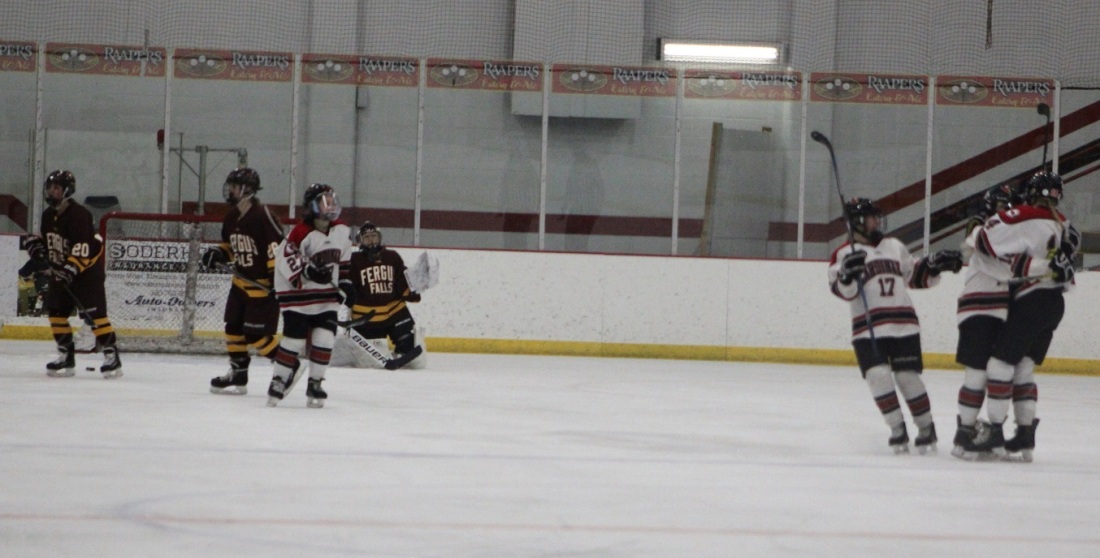 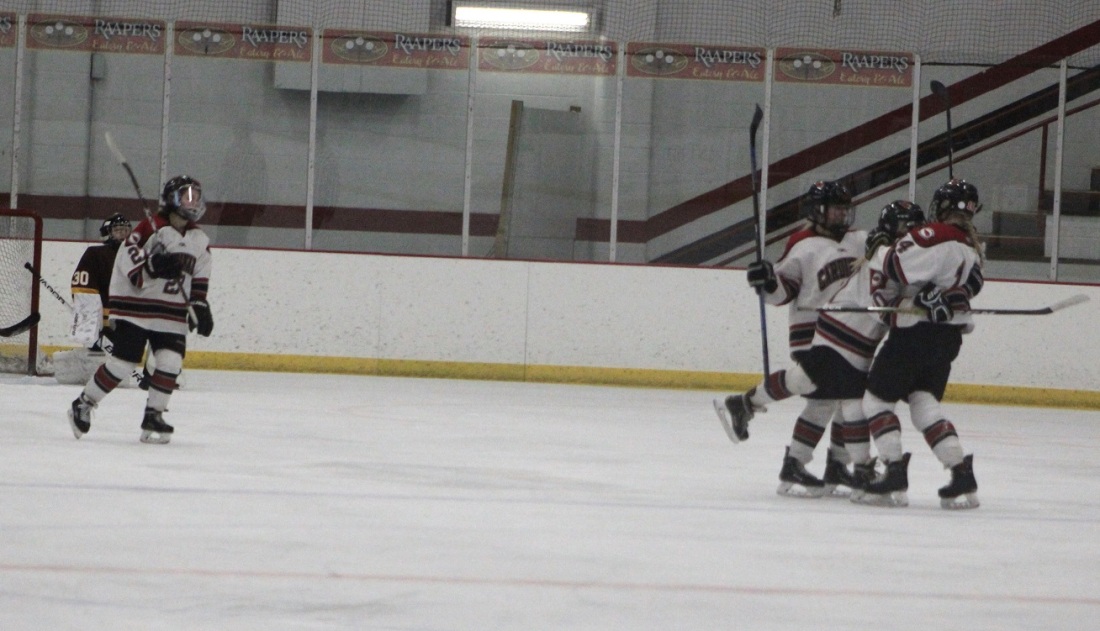 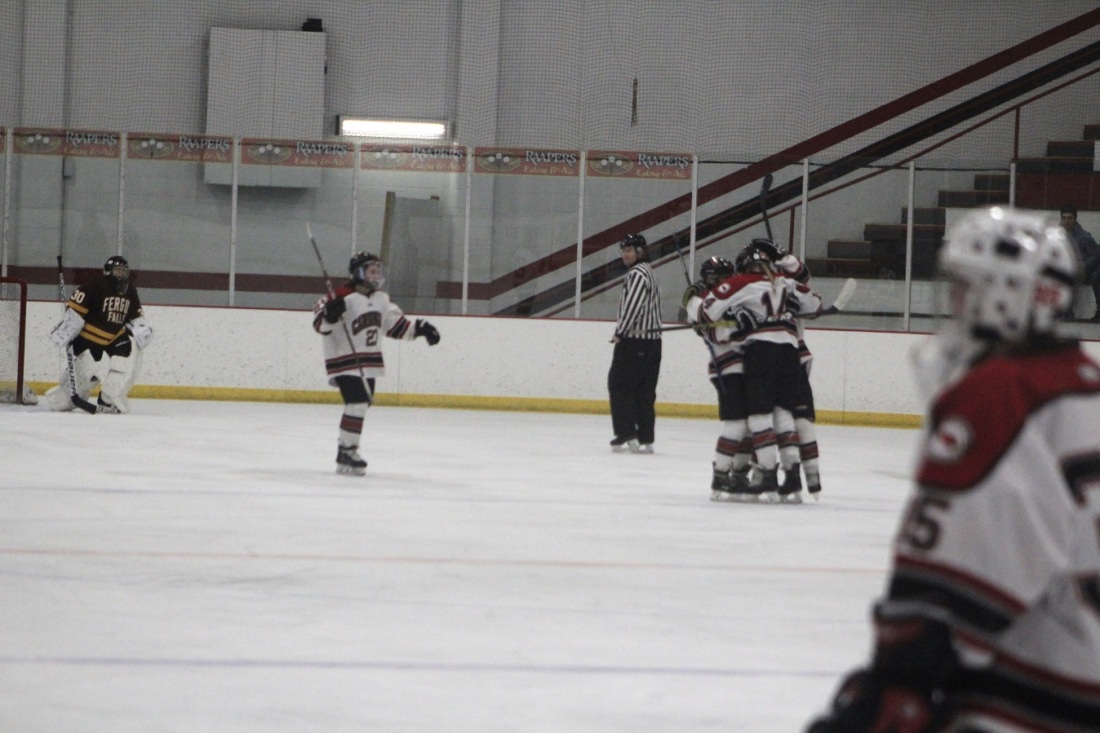 [The Otters scored on a power play.  And then this may have been the start of a series from Kaci . . . ] 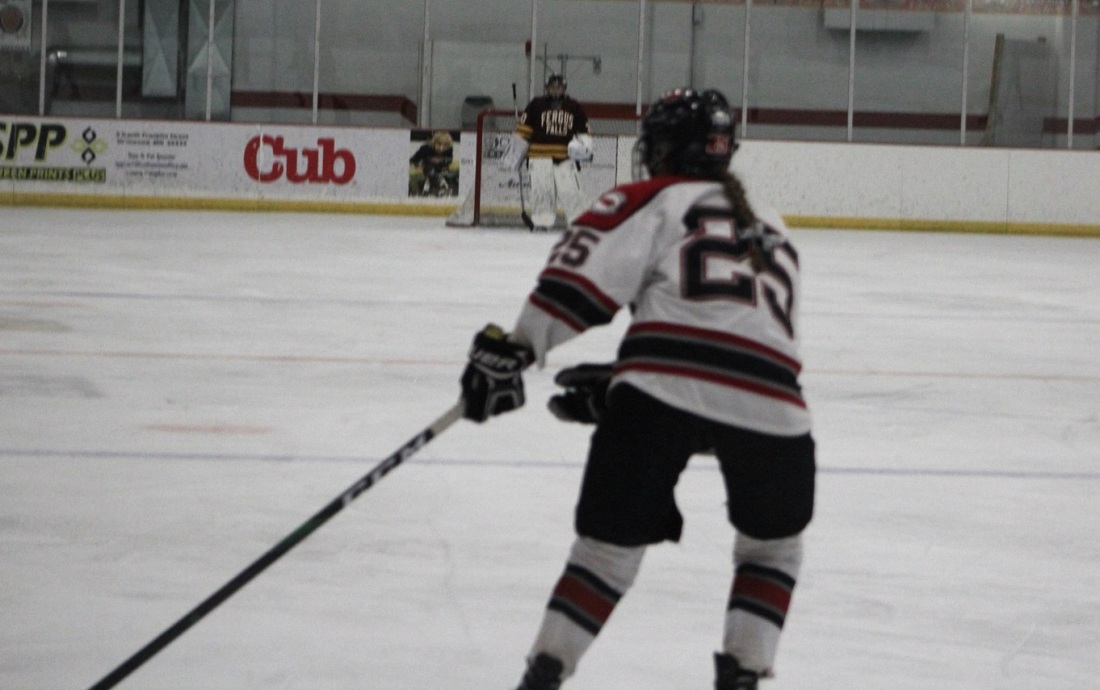 [But the scoreboard was not indicative play.  The Otters dominated the period and actually had a 12 – 4 shot advantage.  It was not unlike the 1st half the basketball team had – I wondered whether there was a bad lunch at school or something?  Radio announcer DMac even asked a player after the game if Coach Molly was perturbed (paraphrased) after that lackluster first period . . . ] 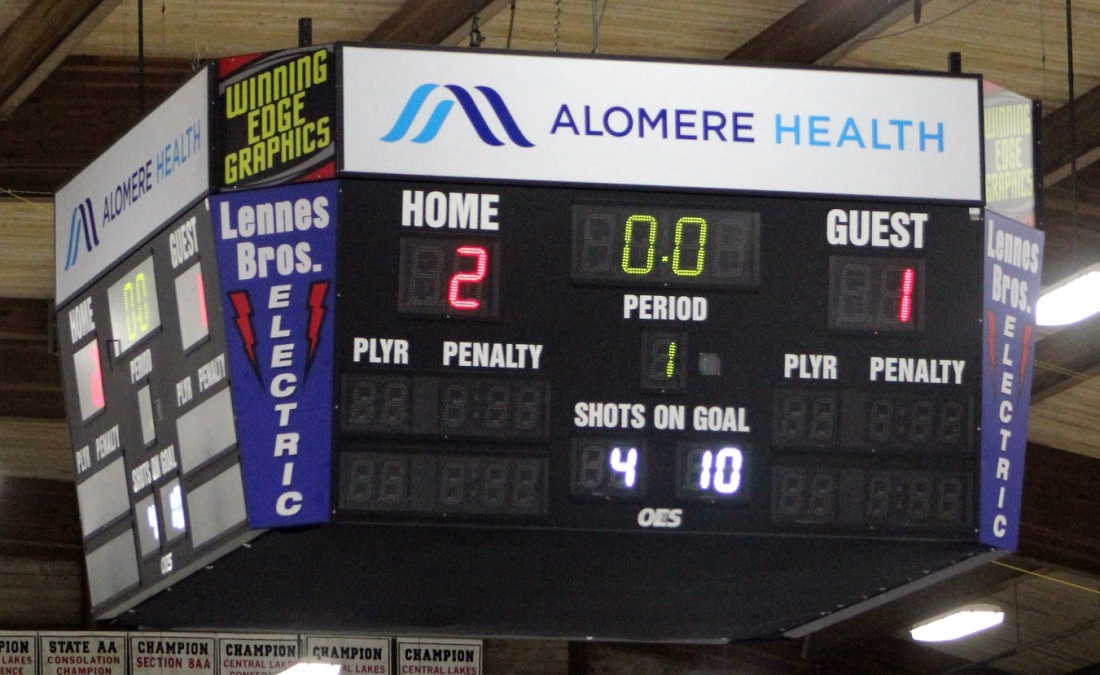 [The 2nd period started and the Cardinals picked it up a bit – Ella Westlund (we also have an Ella Johnston), Marki, and Hanley, front to back . . . ]

[Marki and Ella stood over the fallen Otter goalie . . . ] 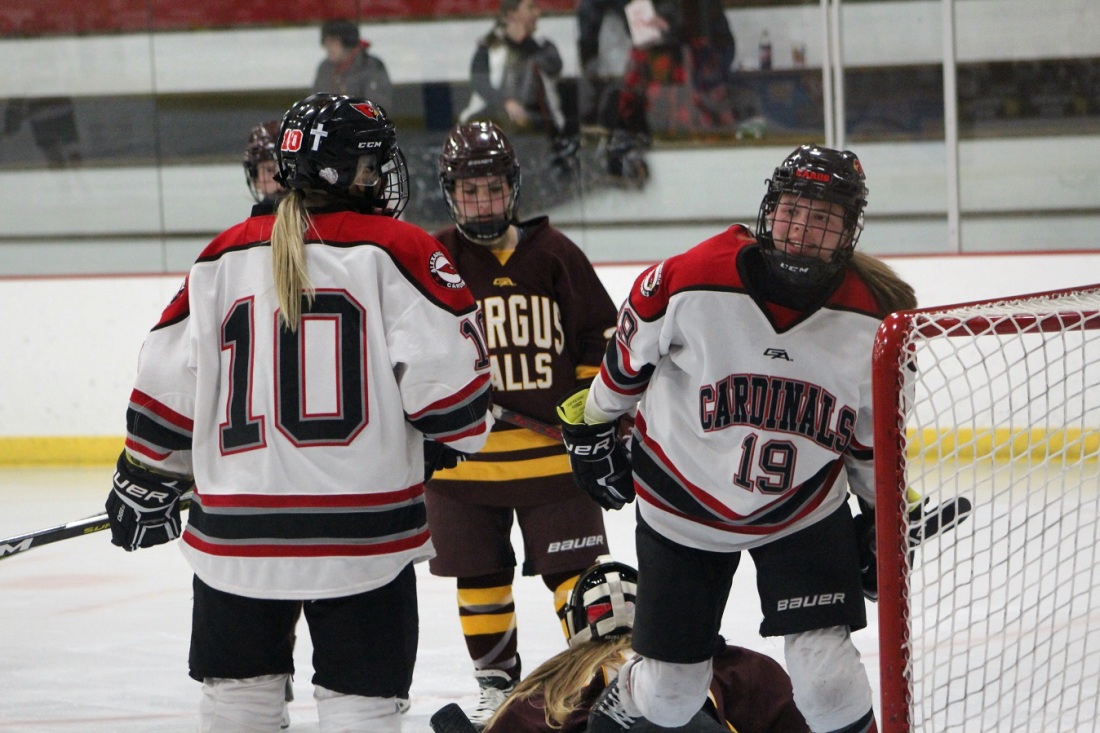 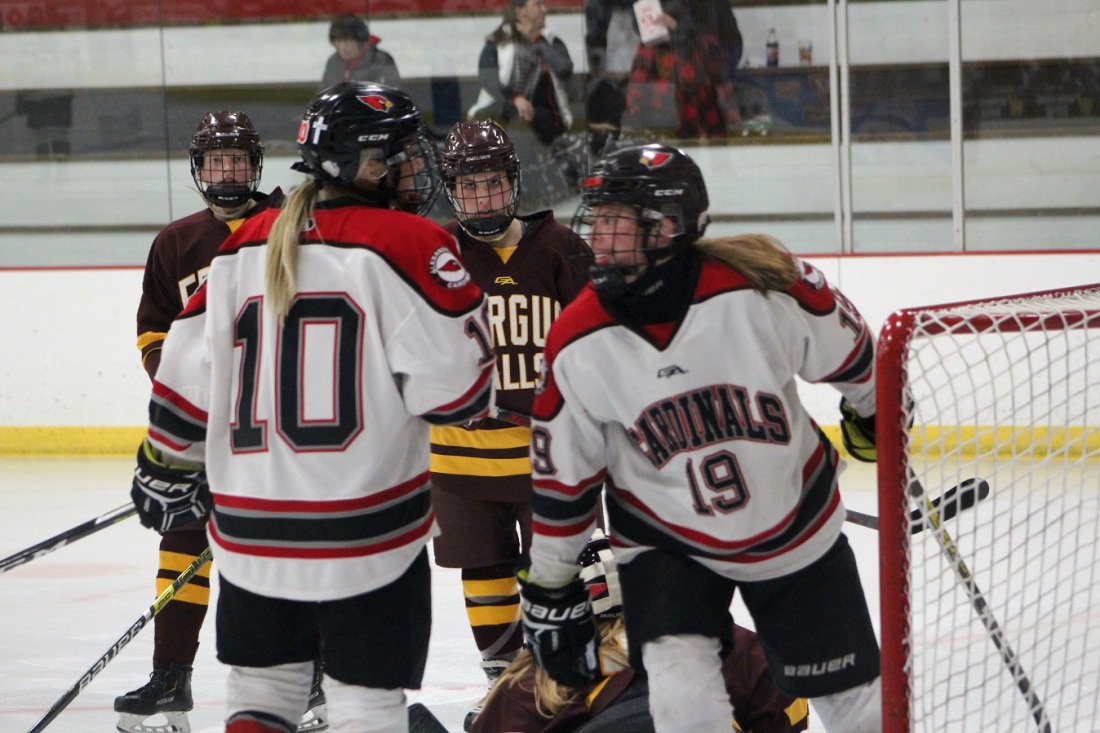 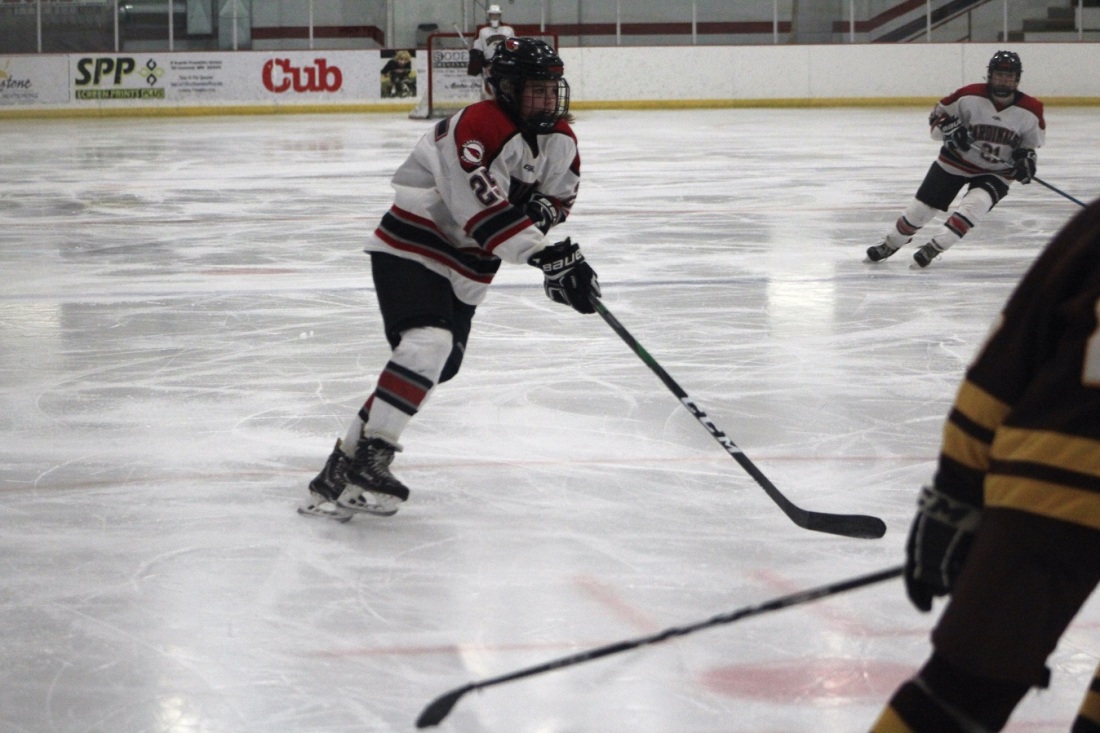 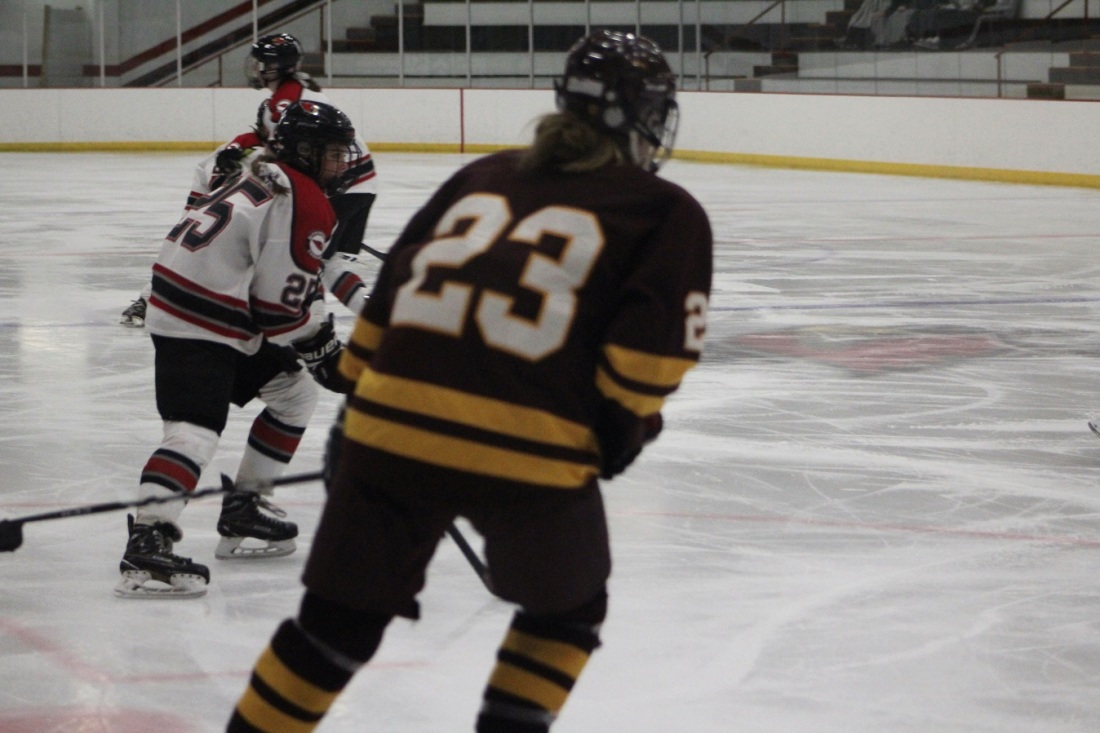 [Kaci in a face off battle with Lauren on her wing and Makenna on point . . . ]

[The Cardinals began the group skate toward the bench for the goal following fist bumps, but in the background an Otter skated down ice . . . ]

[Before most were aware the Otters were in our zone with only our goalie back on defense.  We all wondered how could they do that without an after goal face off?  Well, apparently the refs never called a goal, which led to a bit of discussion with both benches before the goal was called good . . . ] 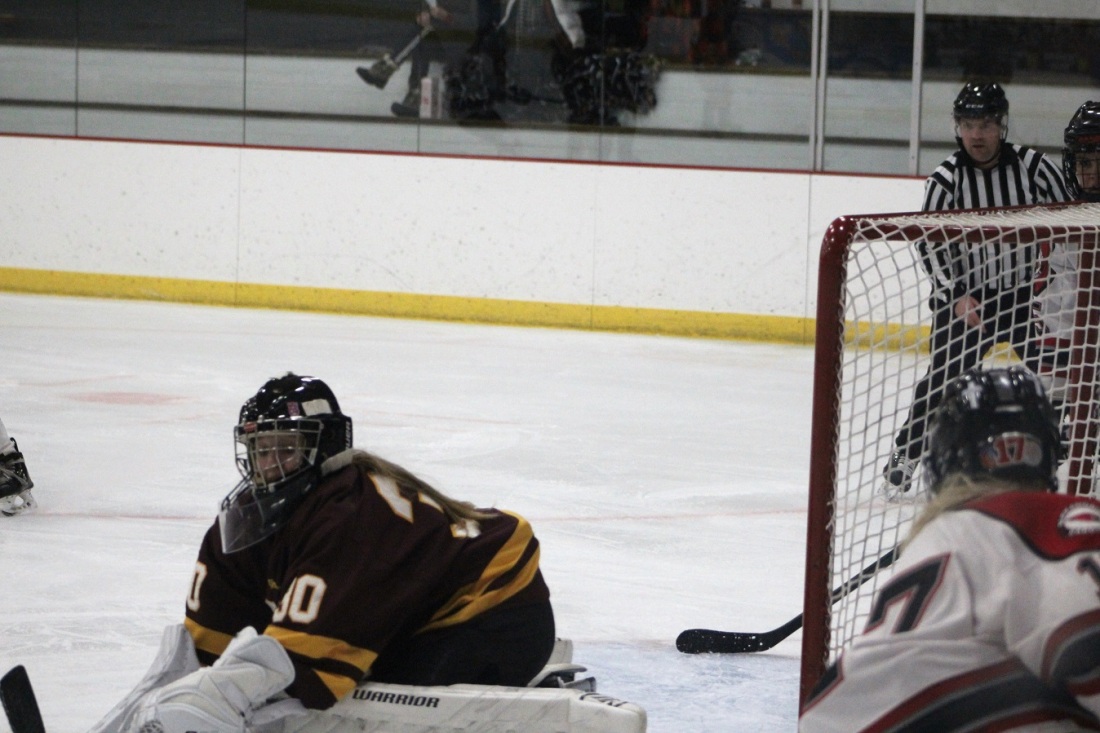 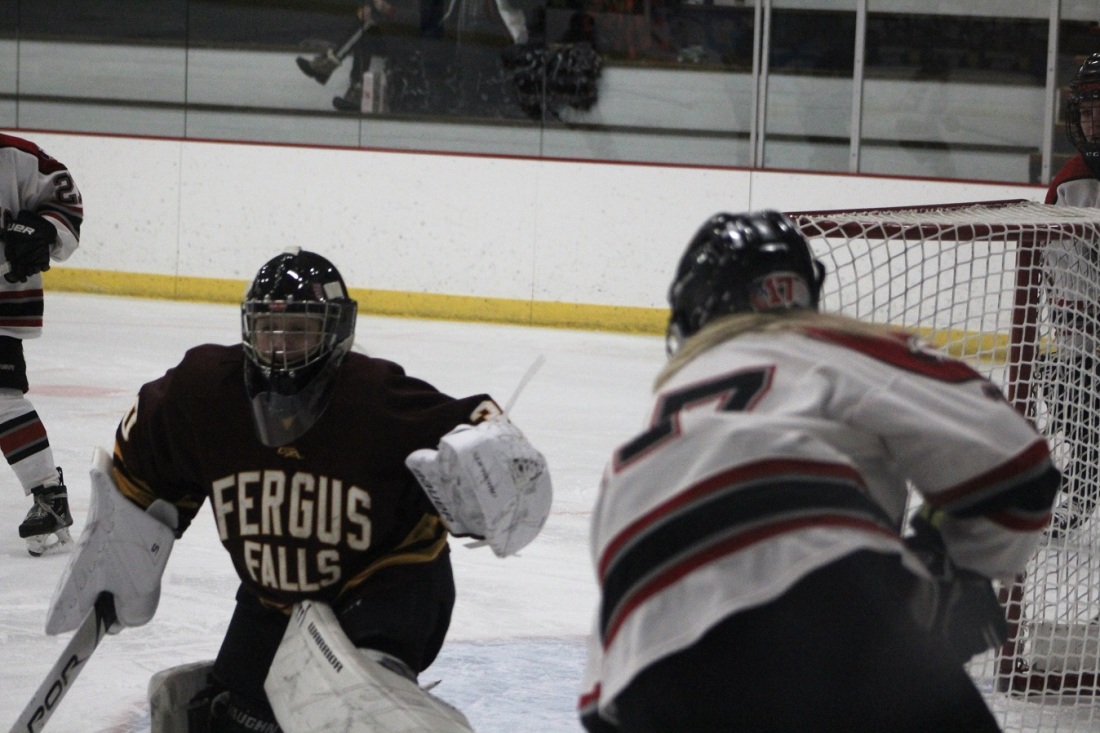 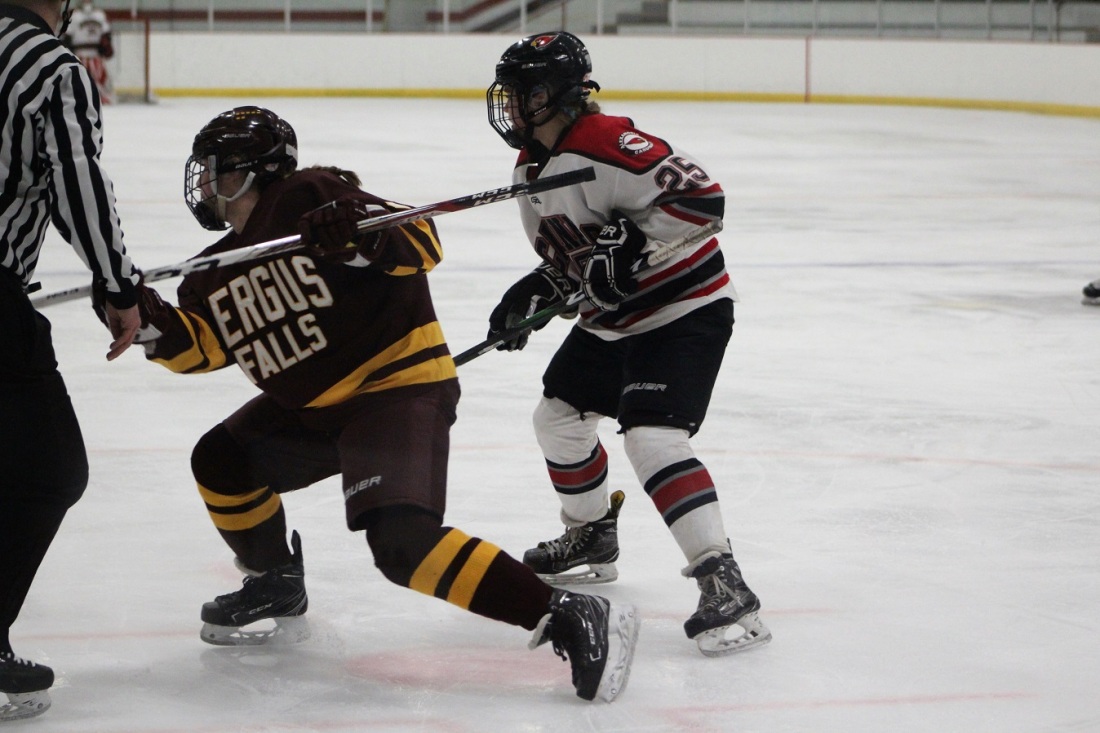 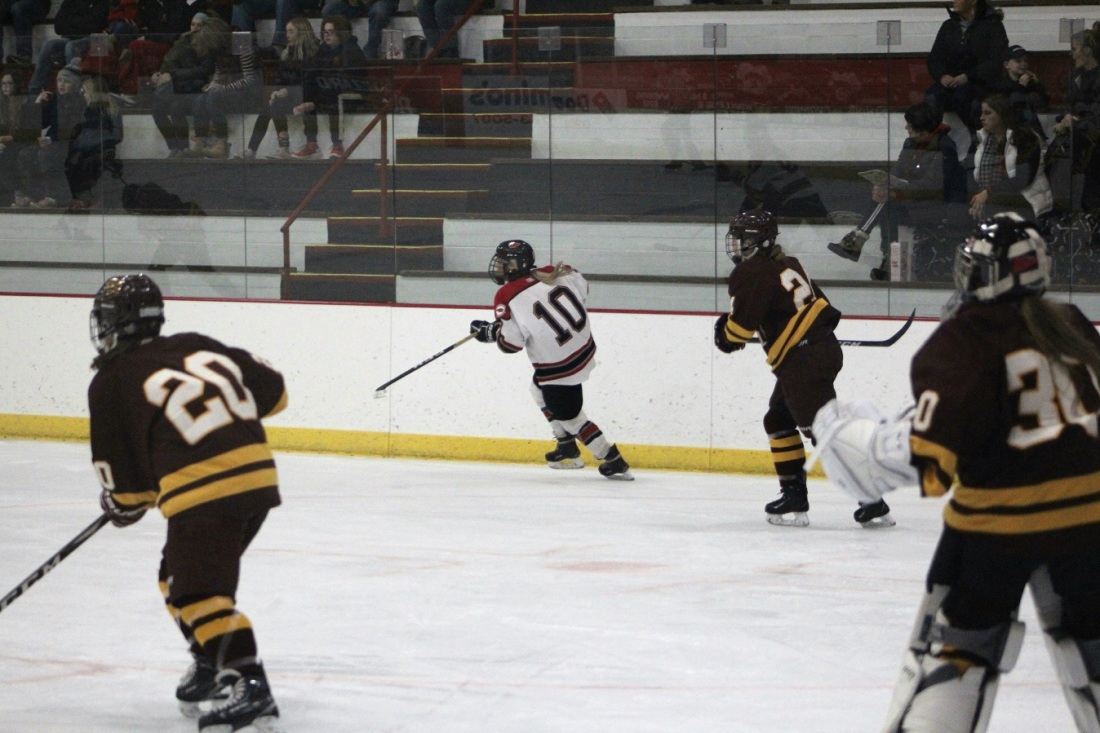 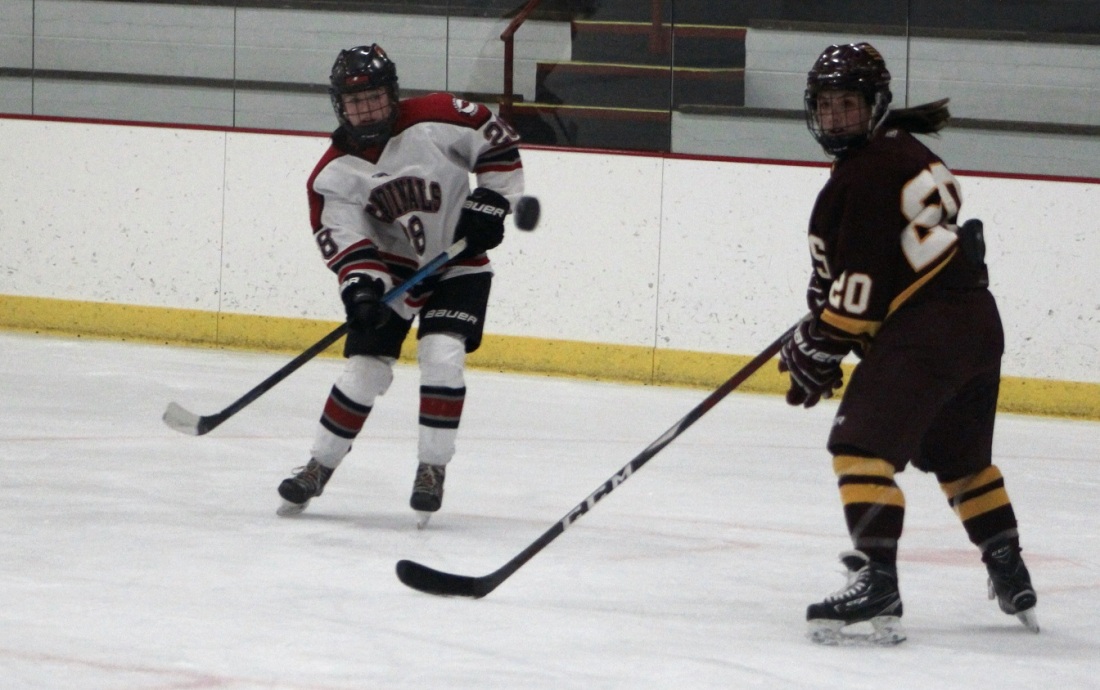 [Aaackkkk, it’s coming right at me!] 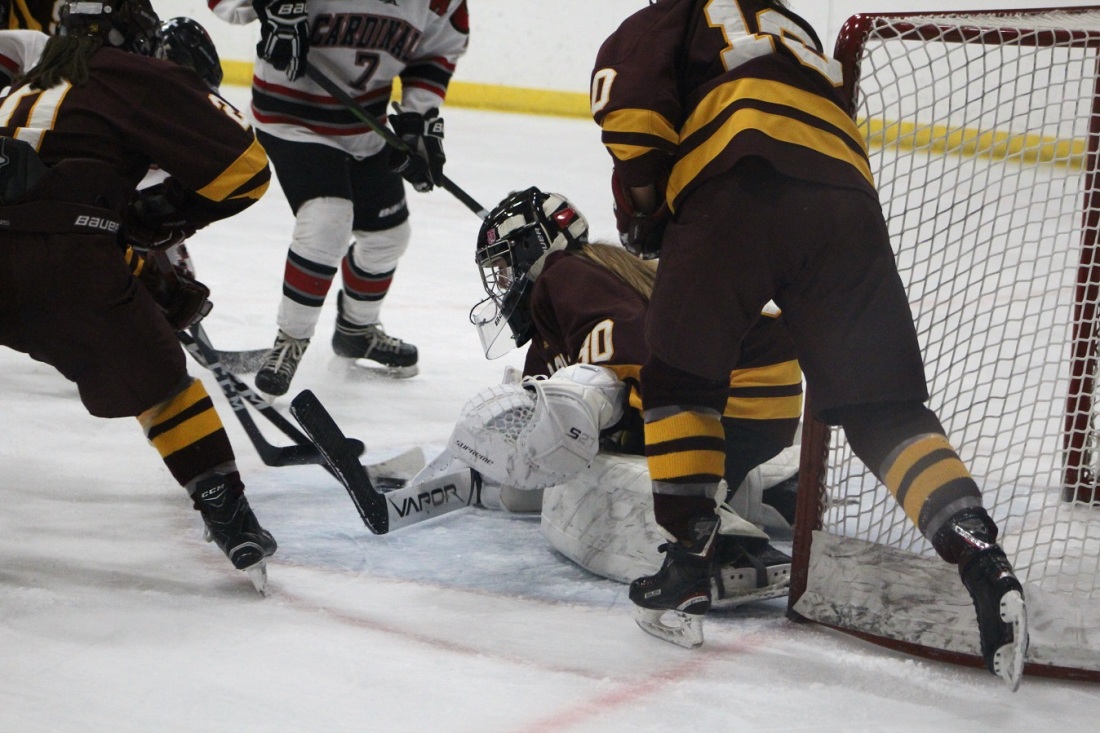 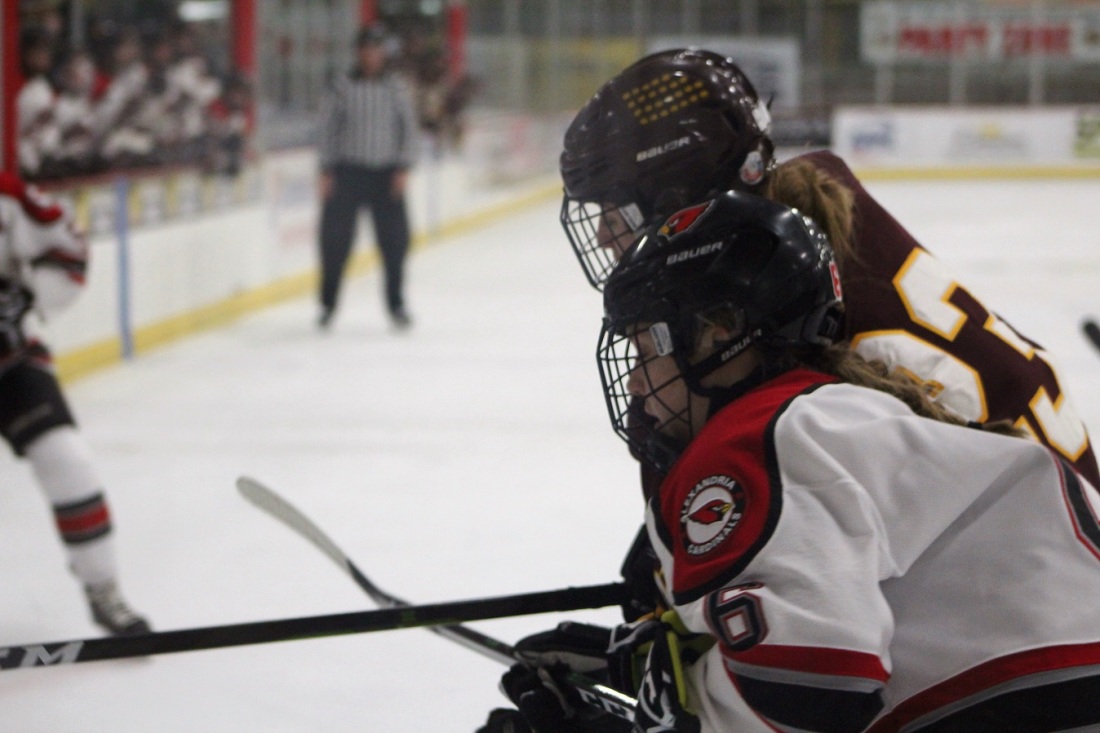 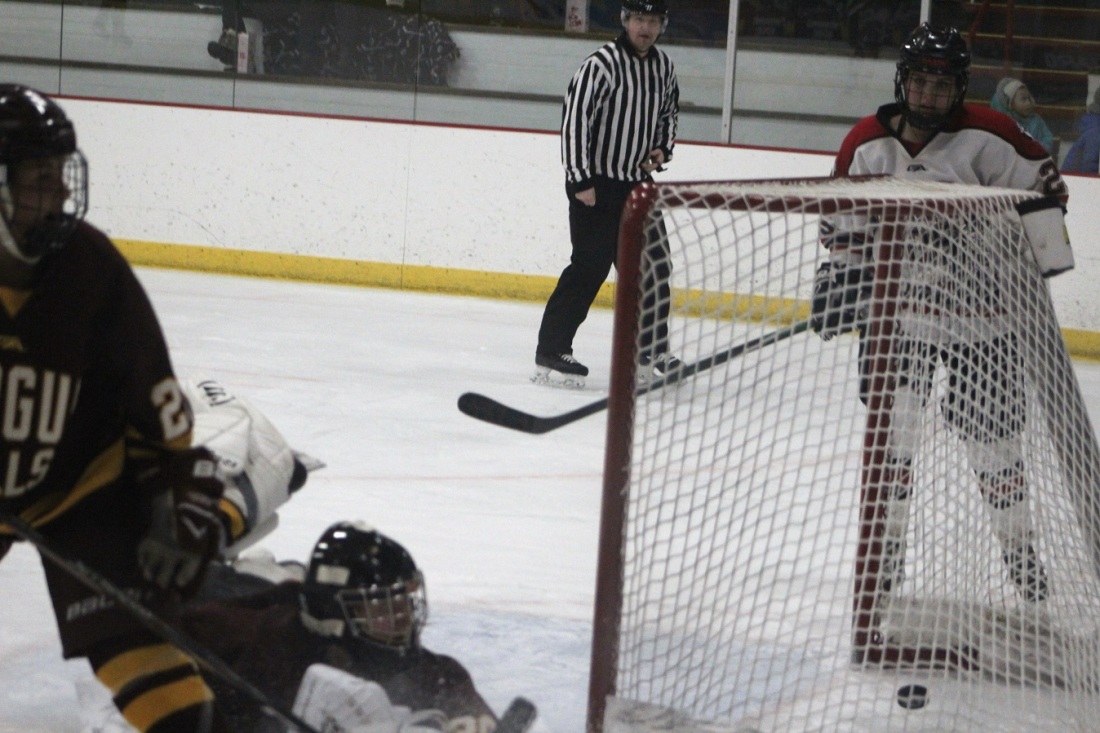 [Though still behind in shots, after two periods we had taken control of the game . . . ]

[The Otters scored a goal early in the period.  The Cardinals, however, spent more and more time in the Otter zone as the game waned, likely a result of our overall speed and depth . . . ] 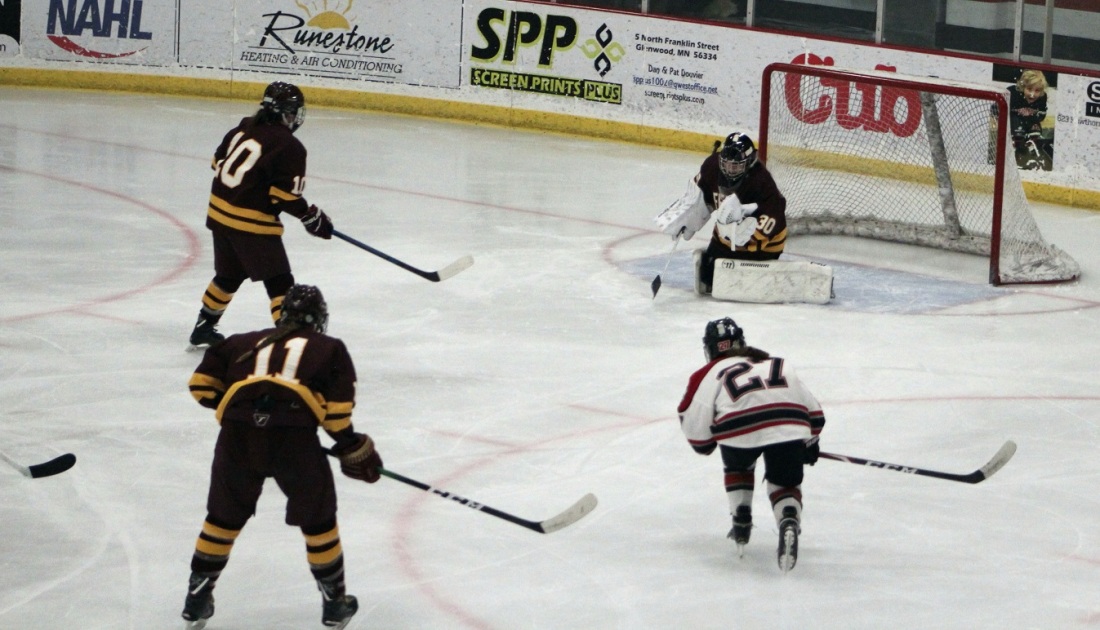 [Mayson on a defense rush behind the goal with Peyton out front . . . ] 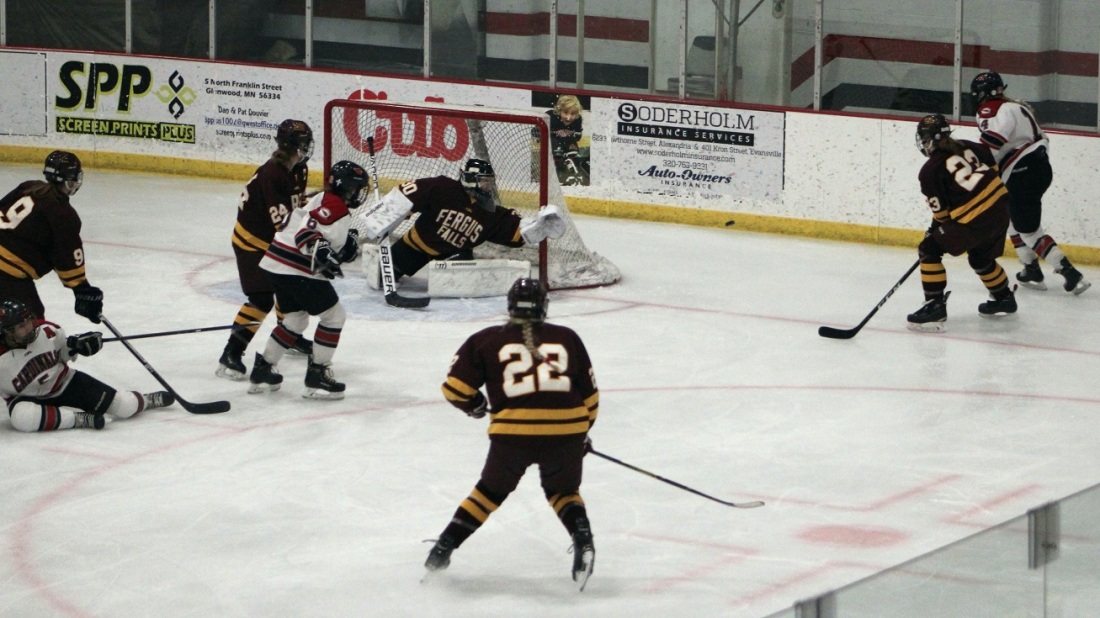 [Mindful that back in the days of my misspent youth, girl basketball players were considered so fragile that crossing midcourt was considered overly rigorous.  Now days the action in front of a hockey goal is the physical equivalent of a WWF match . . . ]

A computer once beat me at chess, but it was no match for me at kick boxing.  ~ Emo Philips