This was the plan, with amendments as necessary.  It was to be a combination of sports and other cultural events.  Thursday (February 6) we graduated from the senior college winter semester and were planning on going to the girls basketball game that night.  But after coming outside after graduation dinner, we encountered an icy snow.  That put the kibosh on the game (which unfortunately has happened several times this winter).  In spite of our absence, our Cards did beat Sauk Rapids-Rice, 76 – 41 (the boys won their 8th in a row that night, 80 – 60, at Rocori).  On Friday (February 7), as reported in this post, our boys hockey hosted A No. 7 ranked Duluth Denfeld (16-5-1).  On Saturday (February 8), Alex hosted the Breakdown Winter Lakes Classic, 7 basketball games played all day long, girls and boys, all highly ranked teams.  Our girls played AAA No. 2 ranked Becker (19-2) at 11:30 am; our boys played AAA No. 7 ranked Delano (17-2) at 7:30 pm.  At 11:30 am, the Super covered for me at our monthly climate meeting while I went to the basketball game.  Josie was at the winery from 2 – 6:00 pm.  We couldn’t make it.  At 3:00 pm, our girls hockey team (seeded 3rd) hosted St. Cloud (seeded 6th) in the opening round of the section 8AA hockey tournament.  At 6:30 pm I made a cameo (the Super stayed longer) at the Central Lakes Symphony Orchestra (CLSO) Thanks to You Party at the Garden Bar before I headed out for the boys basketball game.  While I will post on all the games (eventually), they were all, in the parlance of dear old dad, real pants-wetters.  On Sunday (February 9) we had the noon wine pick up party at the winery, followed by the CLSO concert, followed by book club.  Who said winters in the frozen tundra of West Central Minnesota aren’t exciting? 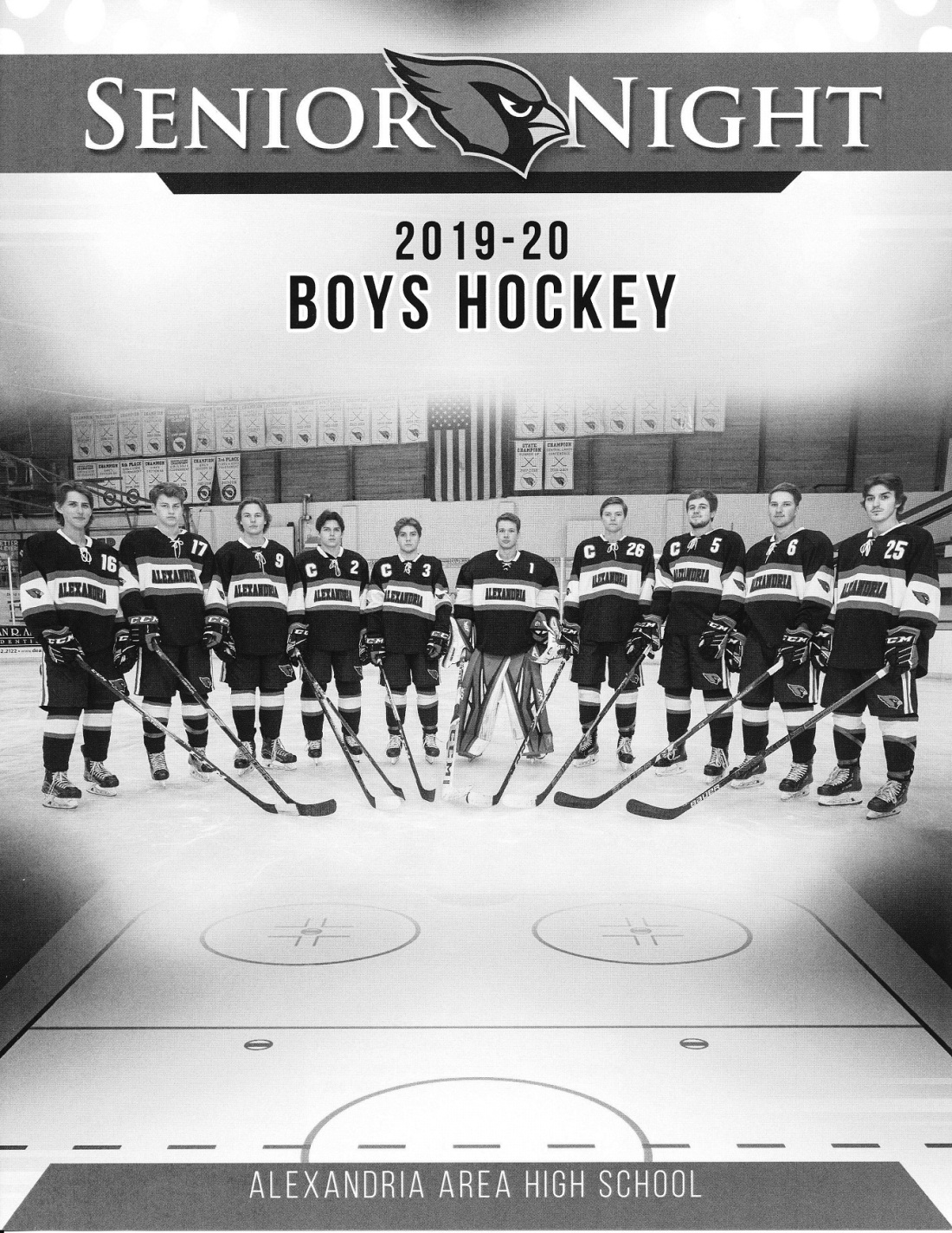 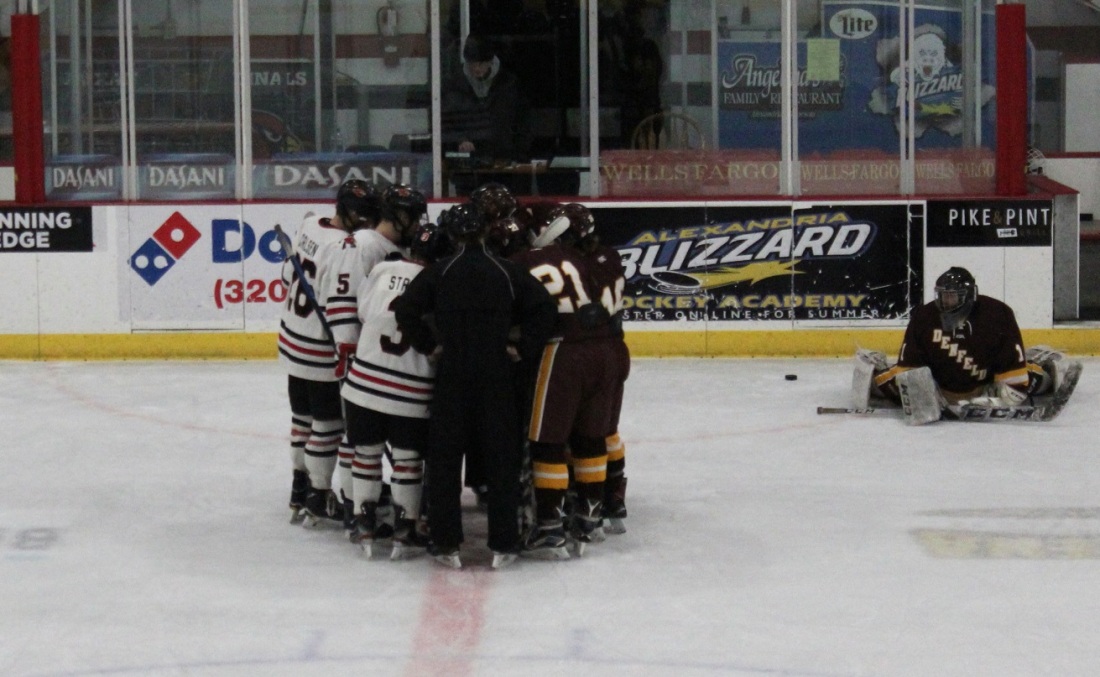 [The nickname “The Hunters” and team mascot of Denfeld is named after Walter Hunting.  Hunting served as a coach to many Denfeld teams over the years . . . ] 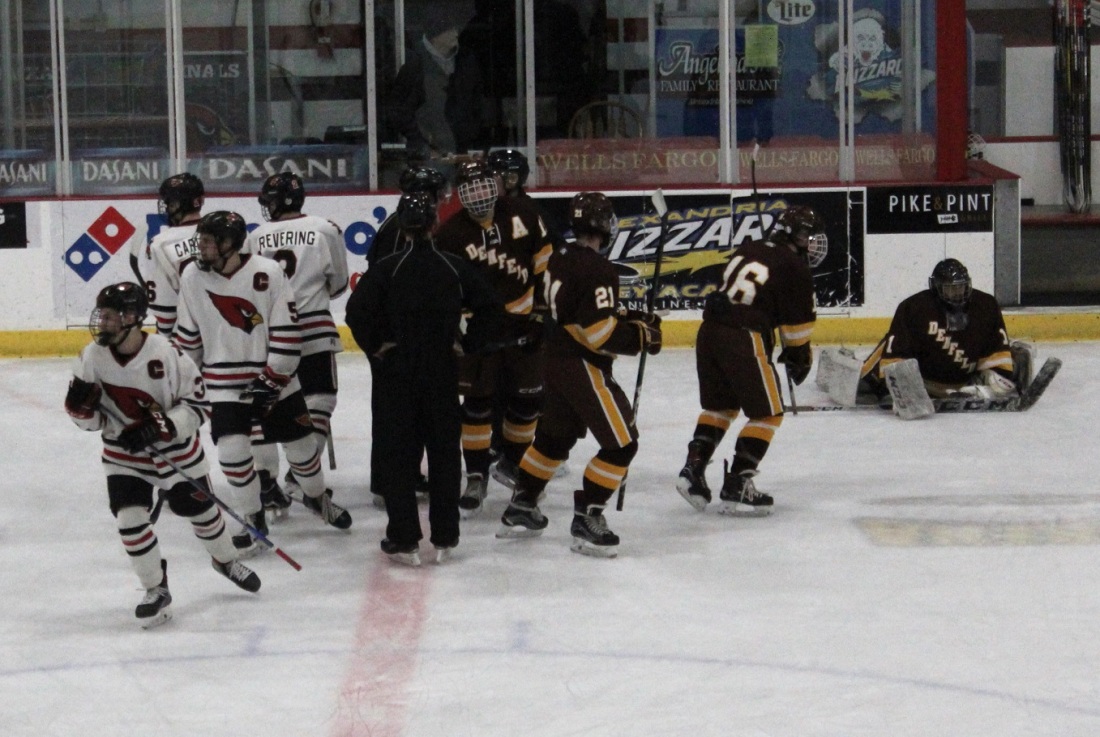 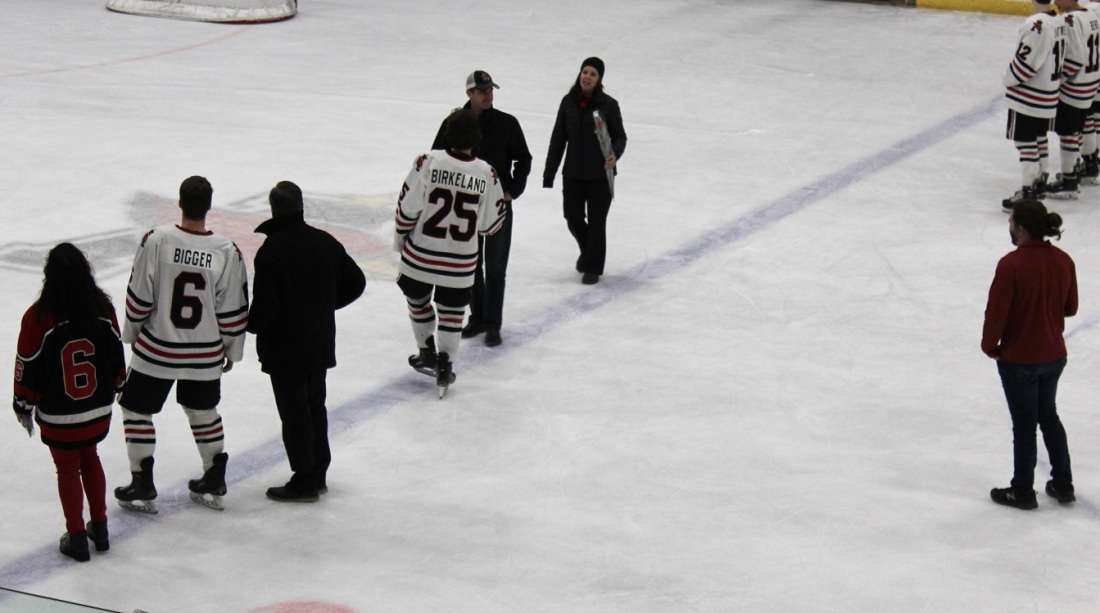 [Matthew Carlsen (26) (Matthew was also quarterback for the football team and is going to Bethel next year, which currently has a starting quarterback from Alex.  But he will play baseball and pitch in college.) . . . ] 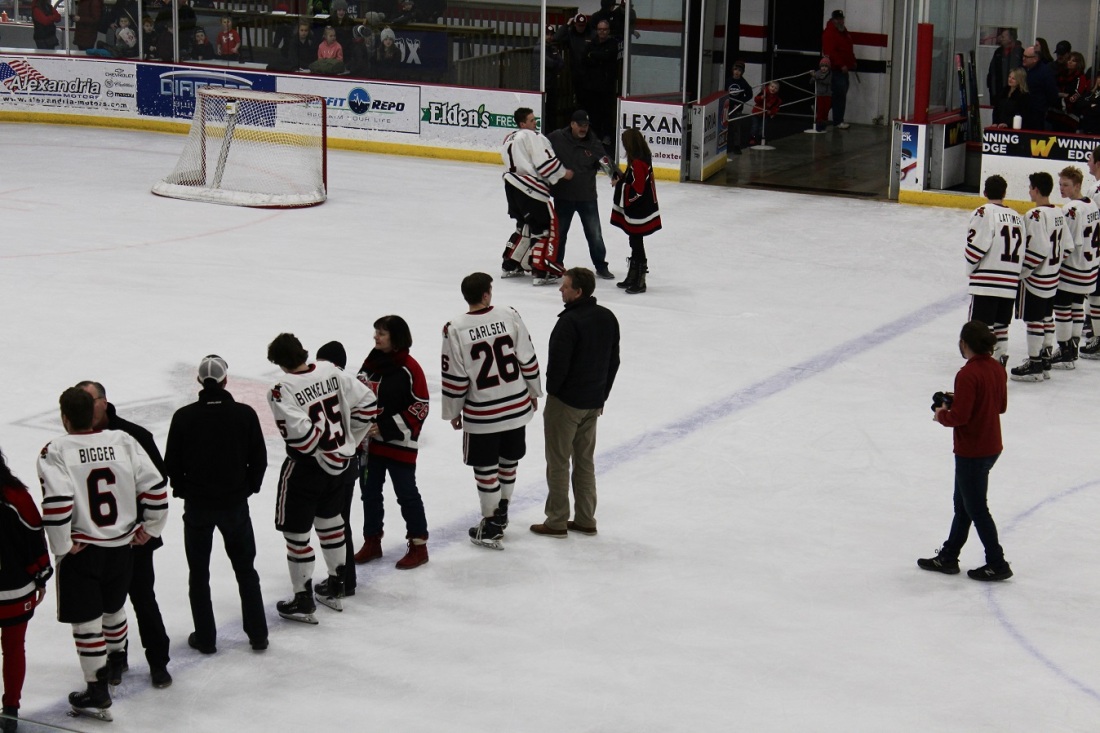 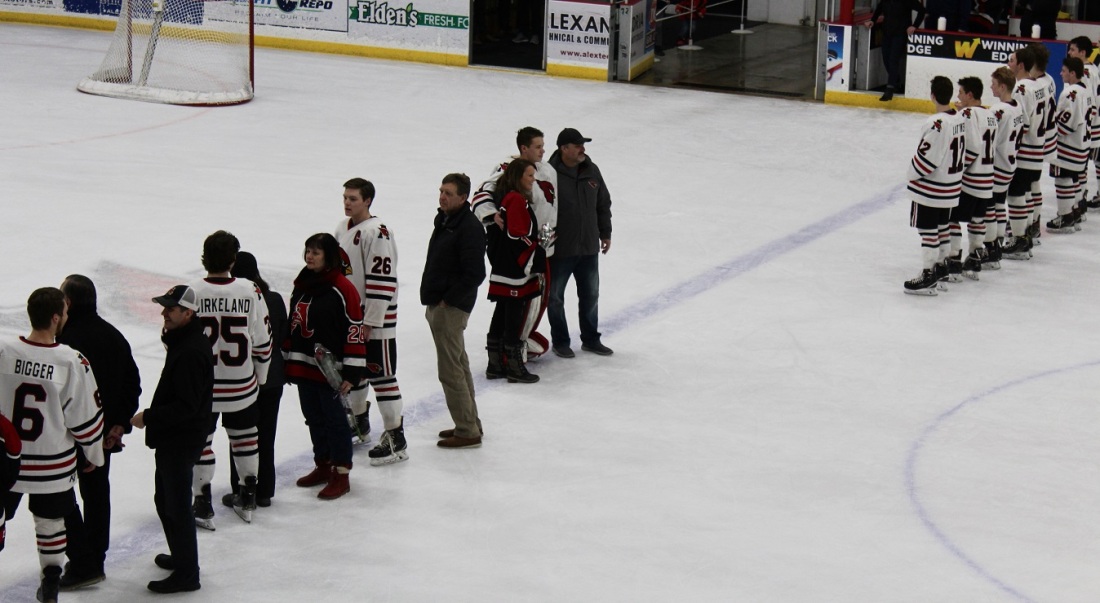 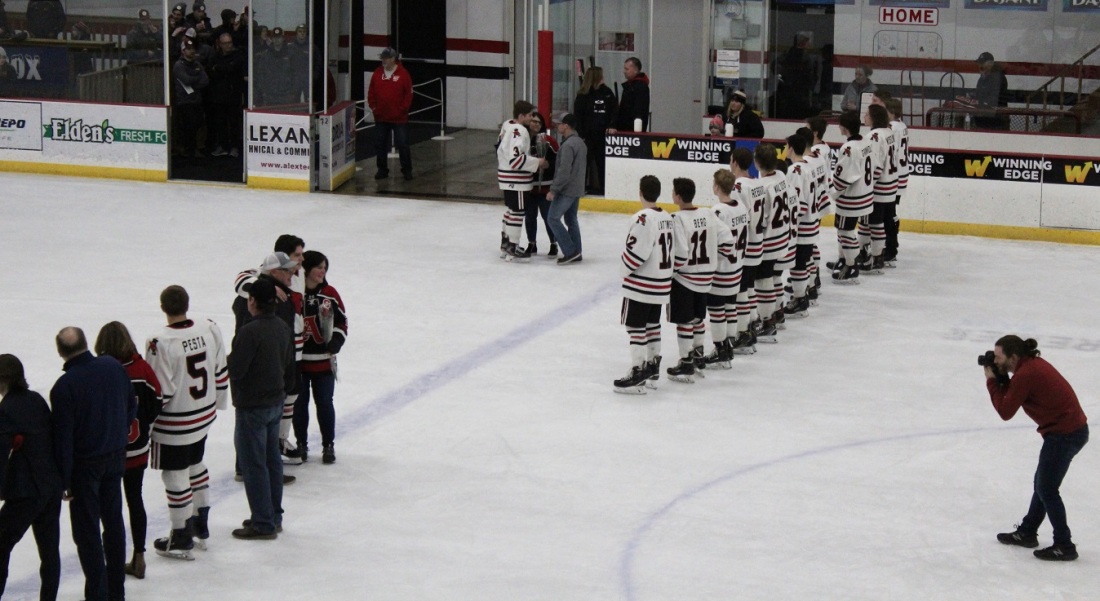 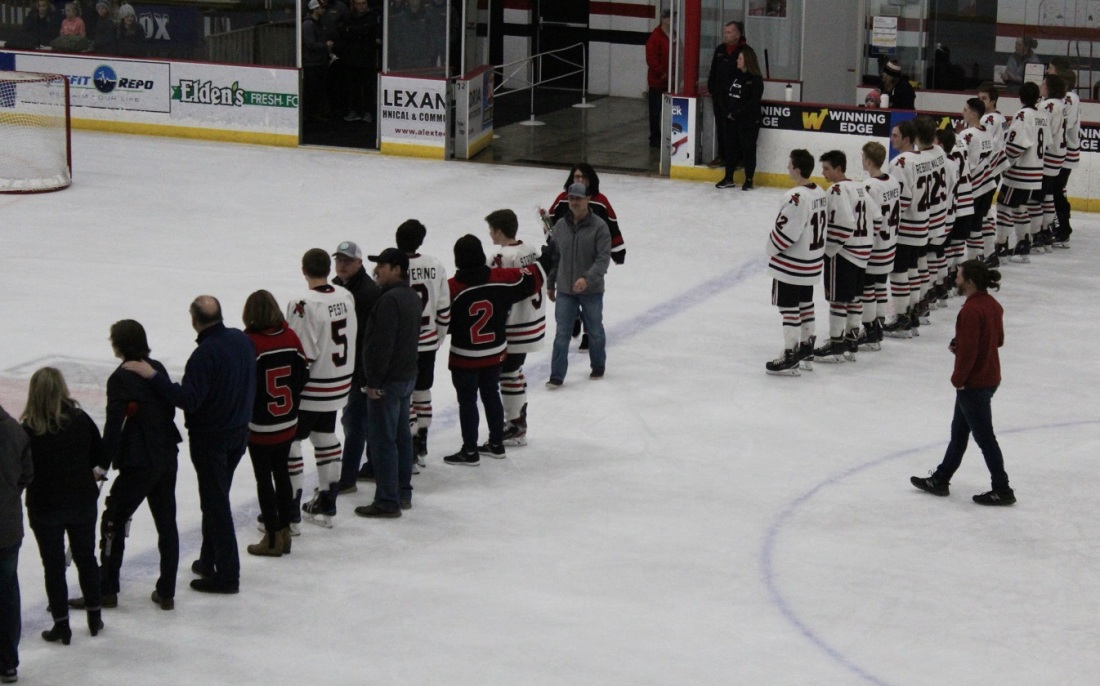 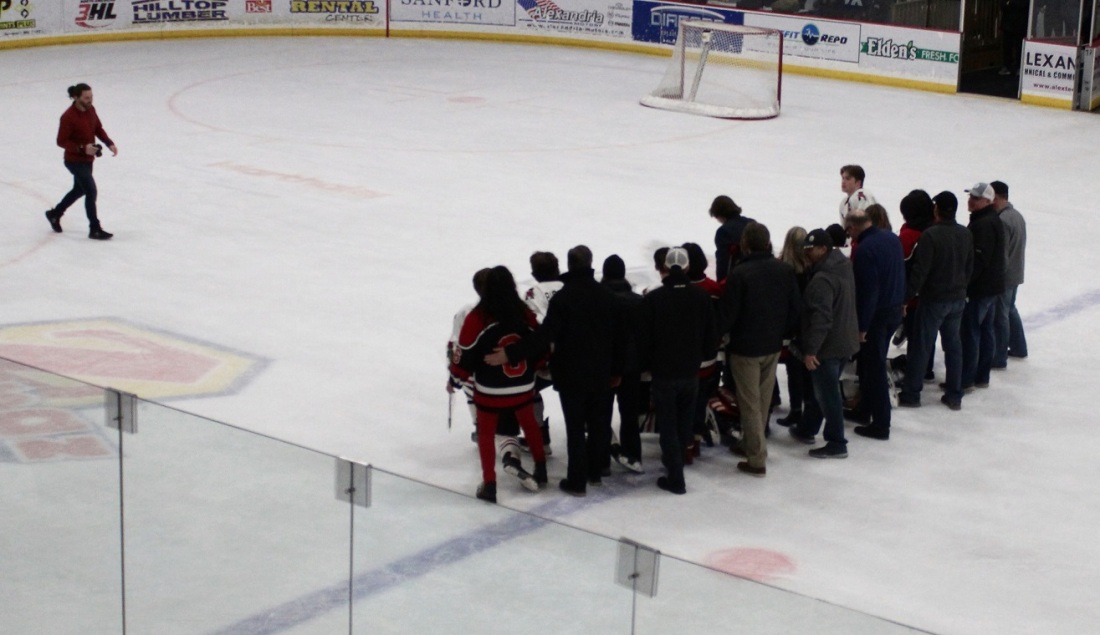 [Josiah (another Joe) Gronholz (8), from just a couple houses away from where we used to live, is having a terrific sophomore season . . . ] 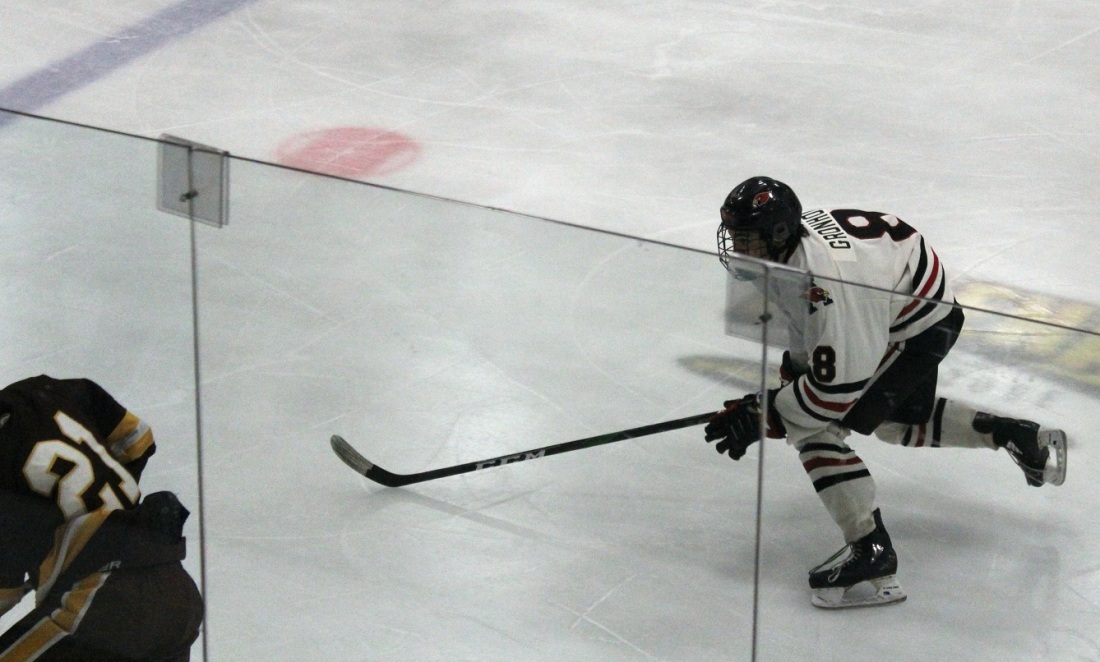 [Which again calls into question how the game could have ever been played without face protection . . . ]

[Caleb is taking the draw here meaning Joe Westlund may have been invited to leave by a referee . . . ]

[So, the Cards took two penalties late in the period.  The Hunters scored on the 5-on-3 advantage, and then scored again just after the 2nd penalty expired at the buzzer ending the period.  If you read the senior bios above, one of the things several players said is they would like to make fighting legal at the high school level.  That’s the big problem we old girls hockey Super Fans have always had issues with in the boys game.  It seems more about hitting (and a big hit draws a bigger roar from the fans than a goal does) than playing the game.  Too often dumb penalties lead to easy goals, and the Hunters took advantage of that in this game to essentially score 3 power play goals . . . ] 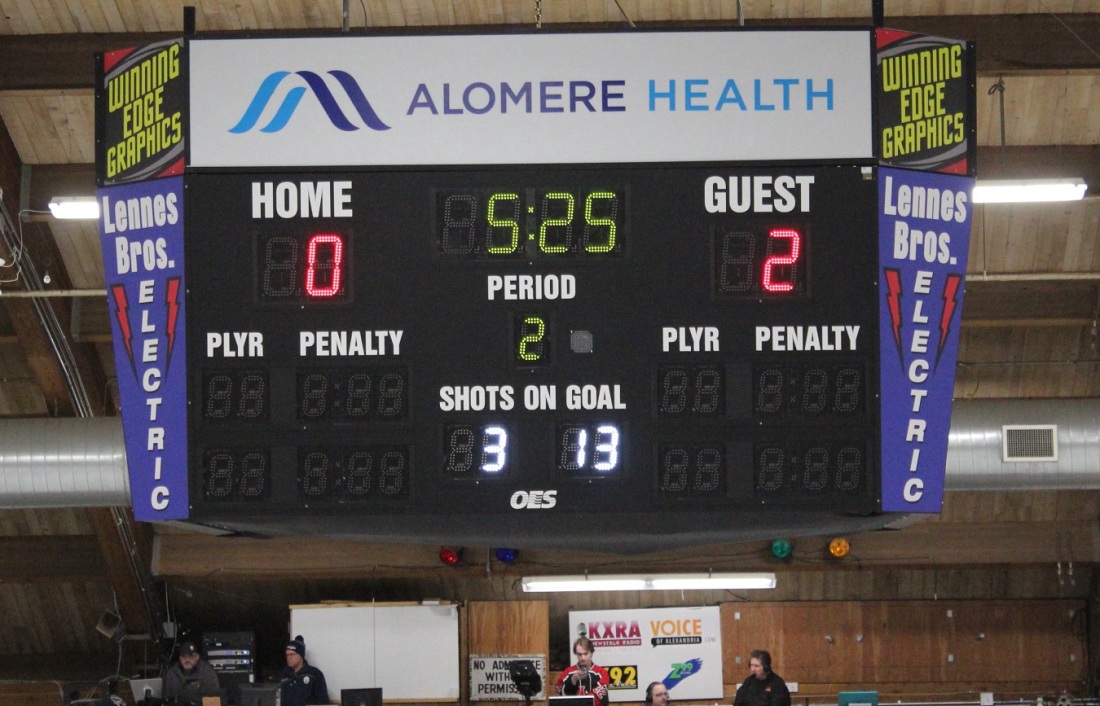 [The 2nd period started with early pressure from the Cards . . . ] 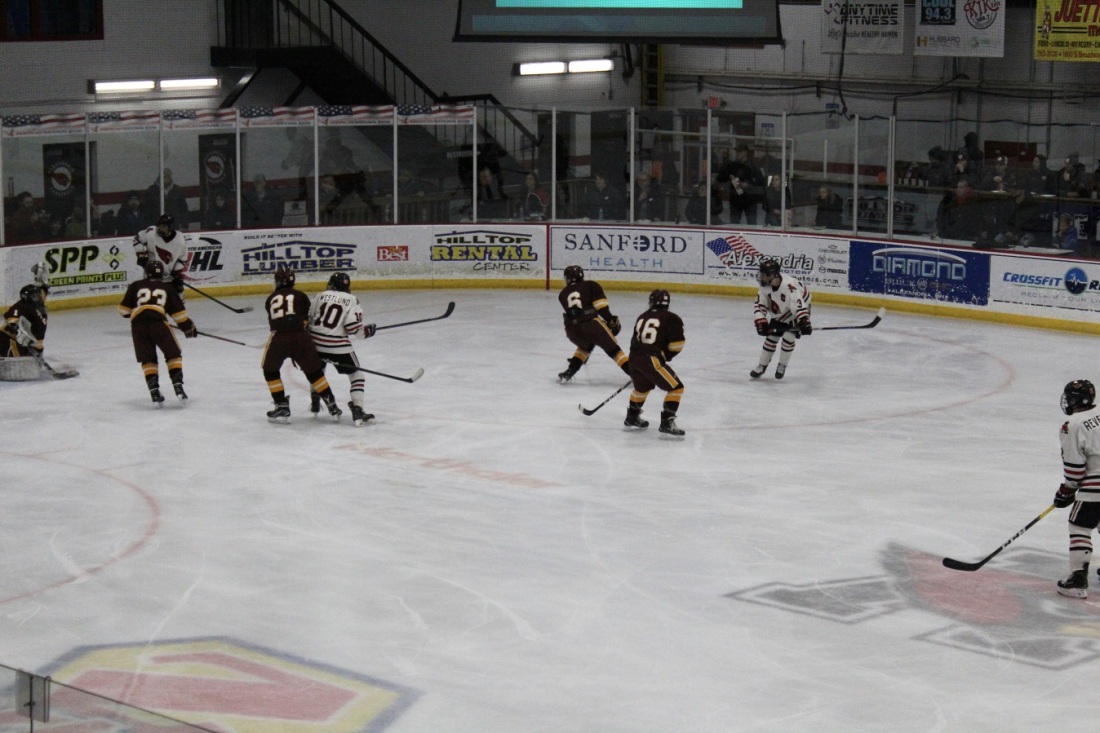 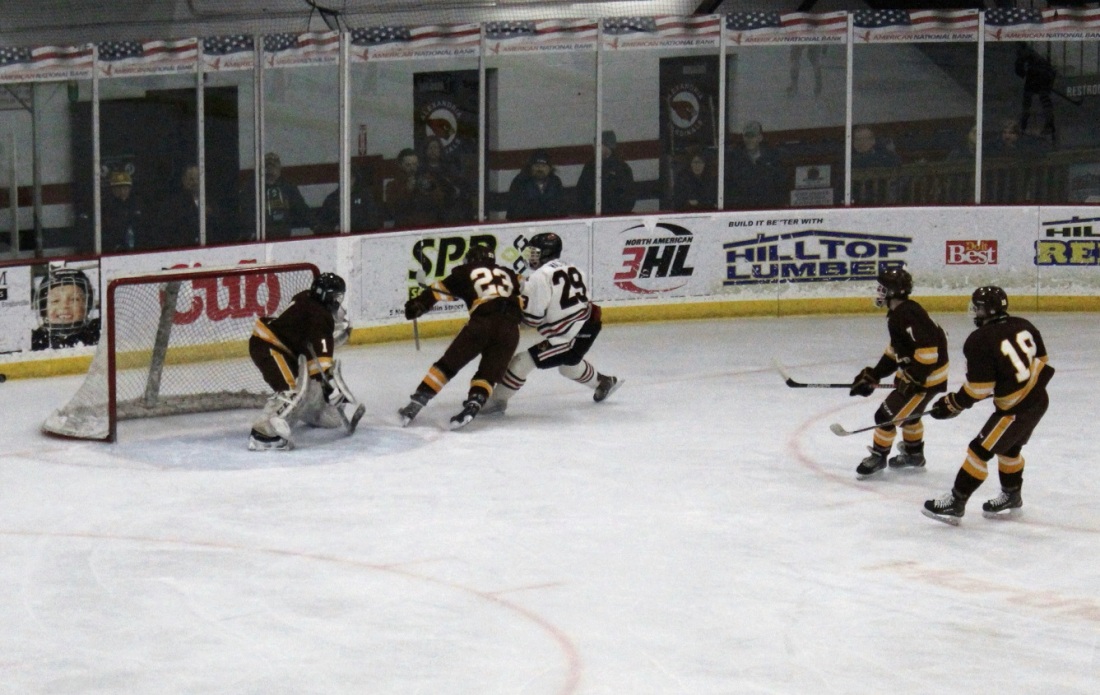 [Shortly thereafter, the Hunters got two more goals within a minute of each.  Then another minute and a half later, Shane scored to keep the Cards relevant.  After an evenly played 2nd period, the Hunters led 4 – 2 . . . ]

[I then committed a faux pas.  I left at the end of the 2nd period.  It was after 9:00 and it was going to be a long day the next day.  At the Y the next morning I talked to another fan who said she also left then, as did a few other folks.  So, of course, from the Cardinal Connection:  The 3rd period the Cardinals exploded for the most goals scored in a period all season. Joe Westlund scored a huge power play goal to get momentum going the Cards way.  Josiah Gronholz and Andrew Revering added 2 more helpers to their night’s scoring.  Caleb Strong tied it up with a huge goal.  Gronholz and Westlund chipping in helpers.  Derek Pesta got the game winner with Jacob Partington and Shane Birkeland getting the Apples on the goal. Josiah Gronholz got the empty net goal at 15:59 to seal the win.  Landyn James had 29 saves for the Cards in the win over the top 10 Class A Duluth Denfeld Hunters. The Cardinals are now 16-8 on the year and close out the season Tuesday night against the Sartell Sabres at the RCC.  Final Score Friday night Alexandria 6 Duluth Denfeld 4.]

Sometimes people ask, ‘Are hockey fights real?’ I say, ‘If they weren’t, I’d get in more of them.’  ~  Wayne Gretzky

Up Next:  Girls basketball