Before this school year started, I’m pretty sure our Cardinals were considered a serious threat to make a run at the state championship.  Then our 6’11” junior center transferred to an Indiana prep school.  We wish him the best (and he’s going to be a Gopher), but suddenly the Cards went from being a team with an intiminating interior presence – to a team with no interior presence.  So, guess what.  At this late stage of the season the Cards, who I imagine are always the smaller team on the court, have an 11-2 conference record and are in first place.  Who’da thunk?

[On this night, the Cards were hosting the St. Cloud Apollo Eagles.  Earlier this year the Eagles, as I recall, were ranked as high as #3 in class AAA.  They were killing people.  They beat the Cards at their place 82-69 (one of our 2 conference losses).  They have suffered some recent losses in the absence of some key players but were going to be at full strength for this game . . . ] 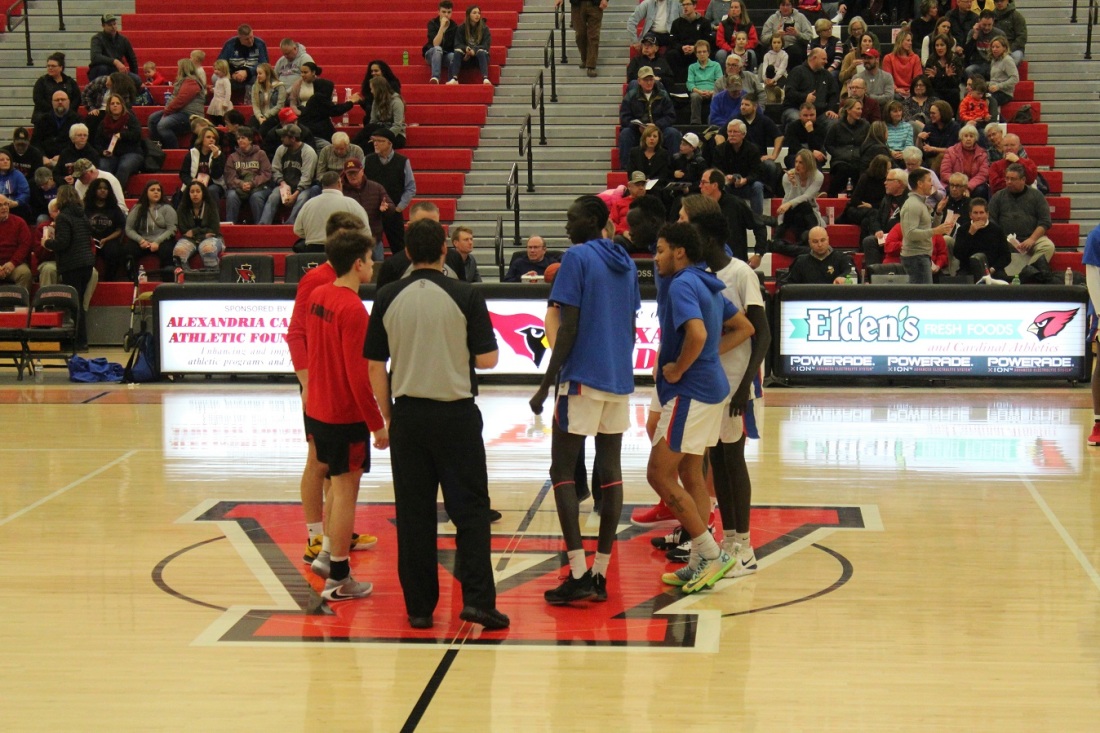 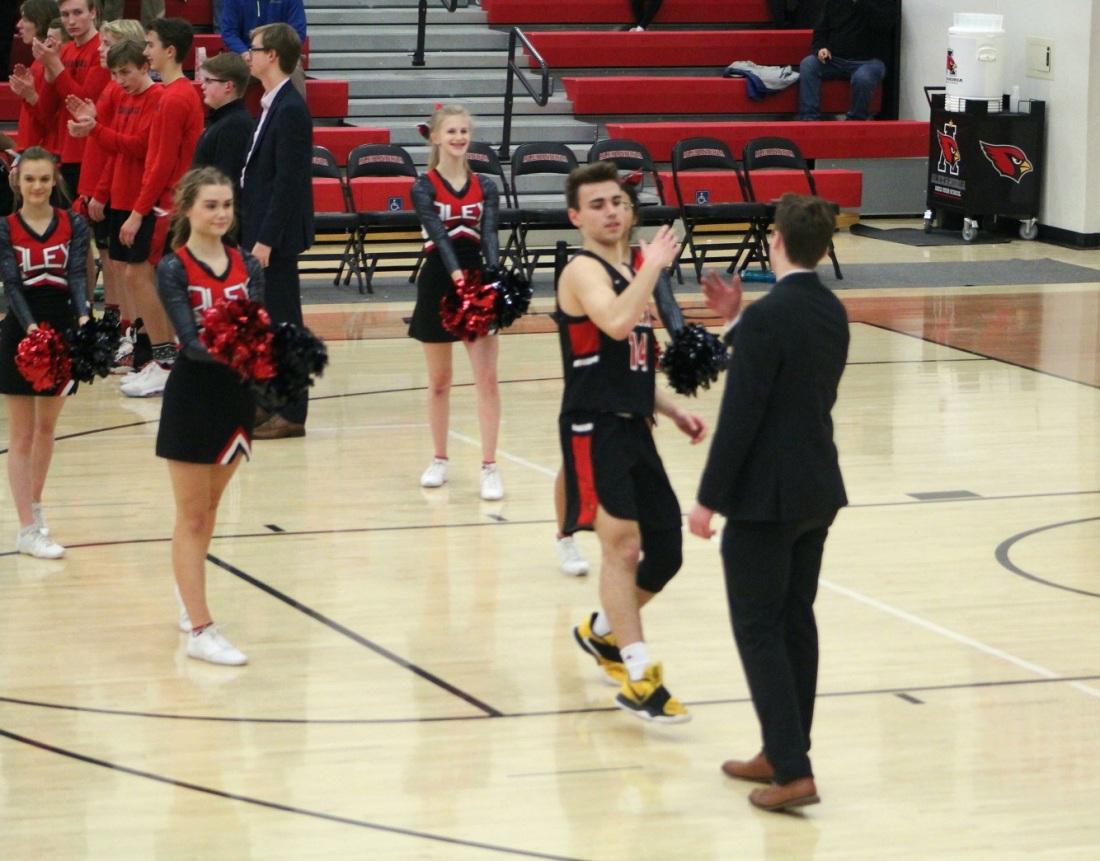 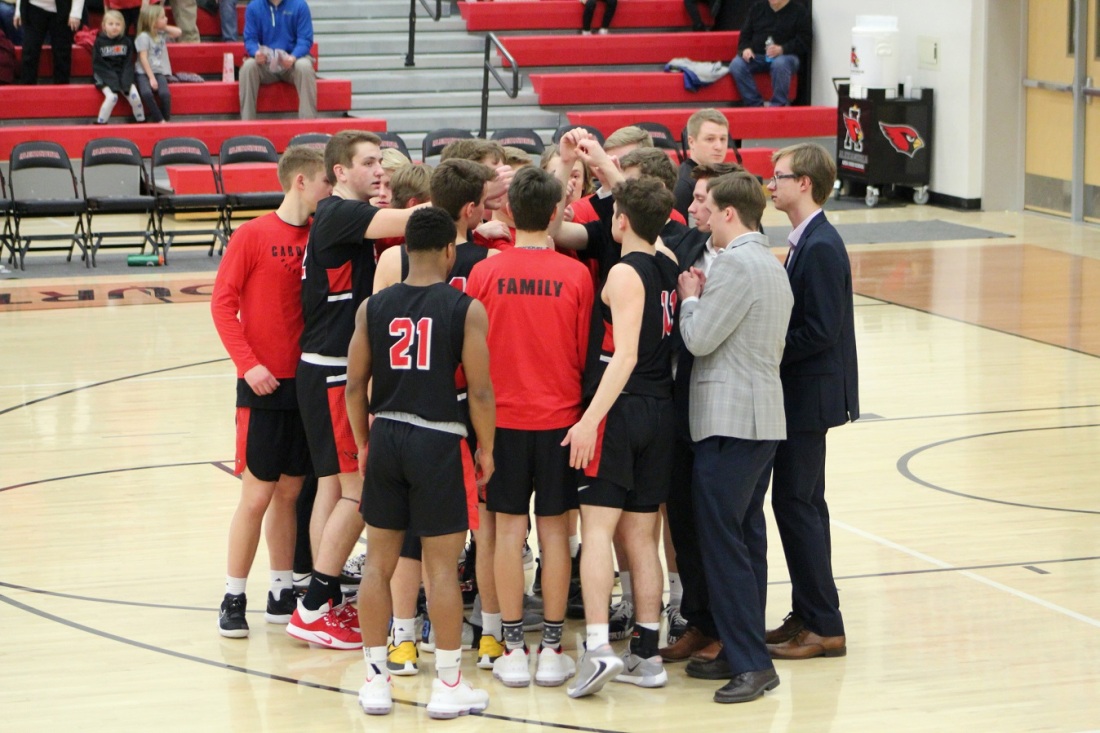 [The center jump at the start of high school games has lost its cachet.  It’s almost always mistimed, swings and misses, sometimes the ball simply falls to the fall untouched where more flailing begins.  Likely because it’s only time it happens in games anymore because of the alternate possession rule . . . ]

[Then Erik had to go down and guard Thomas Diew (50), a sophomore like himself, but who is a large bodied 6’7″.  He’s a real player and unstoppable with Kevin McHale footwork when he gets the ball down low . . . ] 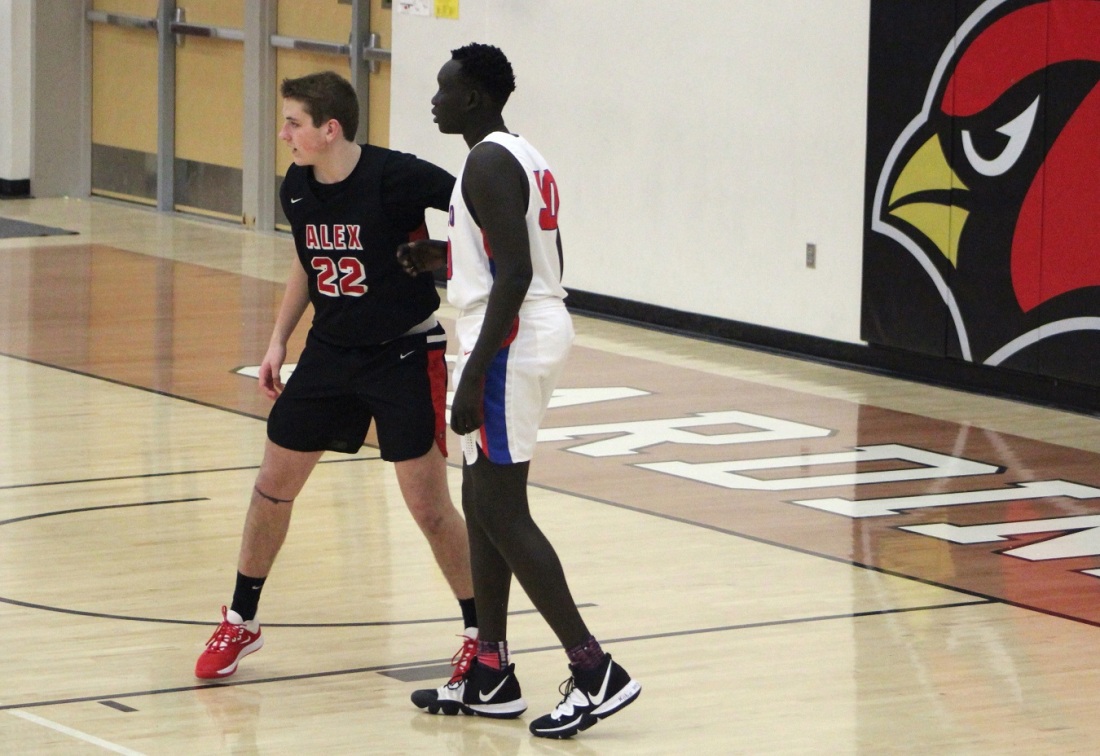 [Keep in touch with him, Erik!]

[Here’s the gist of the game, settled in early.  Colton (35), our tallest guy at 6’5″, had another great game.  His passing lane defense at the point of the team defense creates a lot of indecision for opposing guards just trying to complete passes across his path . . . ] 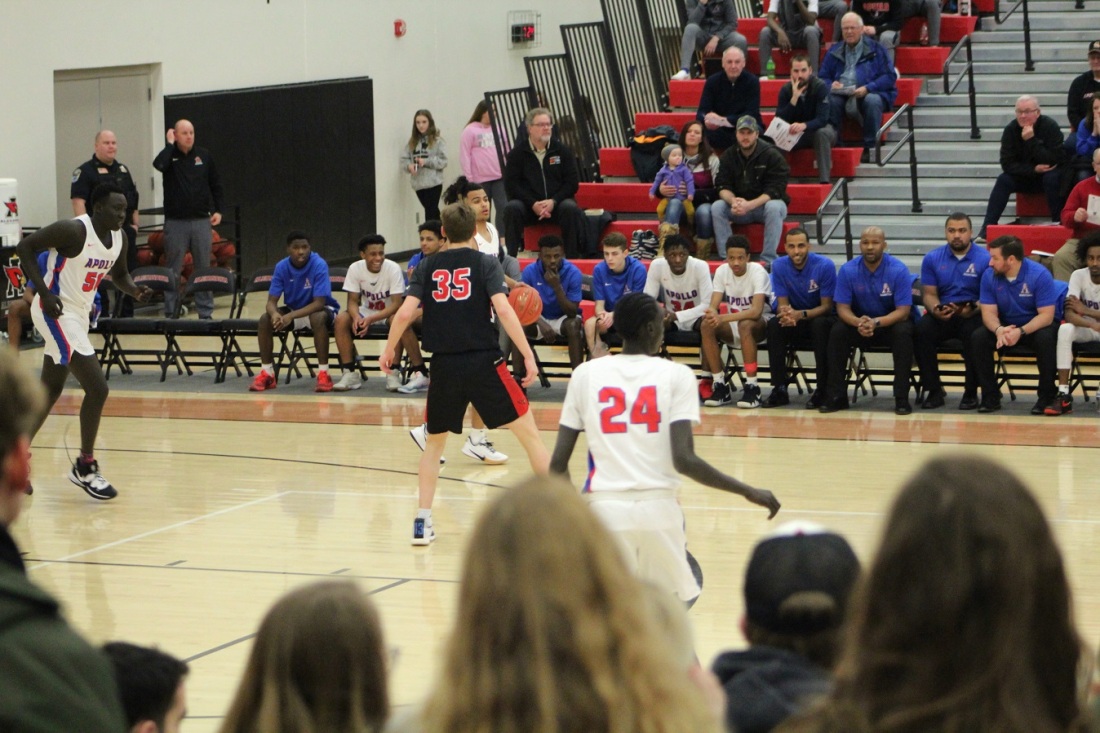 [Of course, with Colton up front, our smaller guys like Kristen (listed at 5’10”?) have to guard the bigs down low.  It’s up to Colton to prevent those passes from getting there . . . ]

[But when the ball gets down low, Colton follows it to give us some semblance of size . . . ] 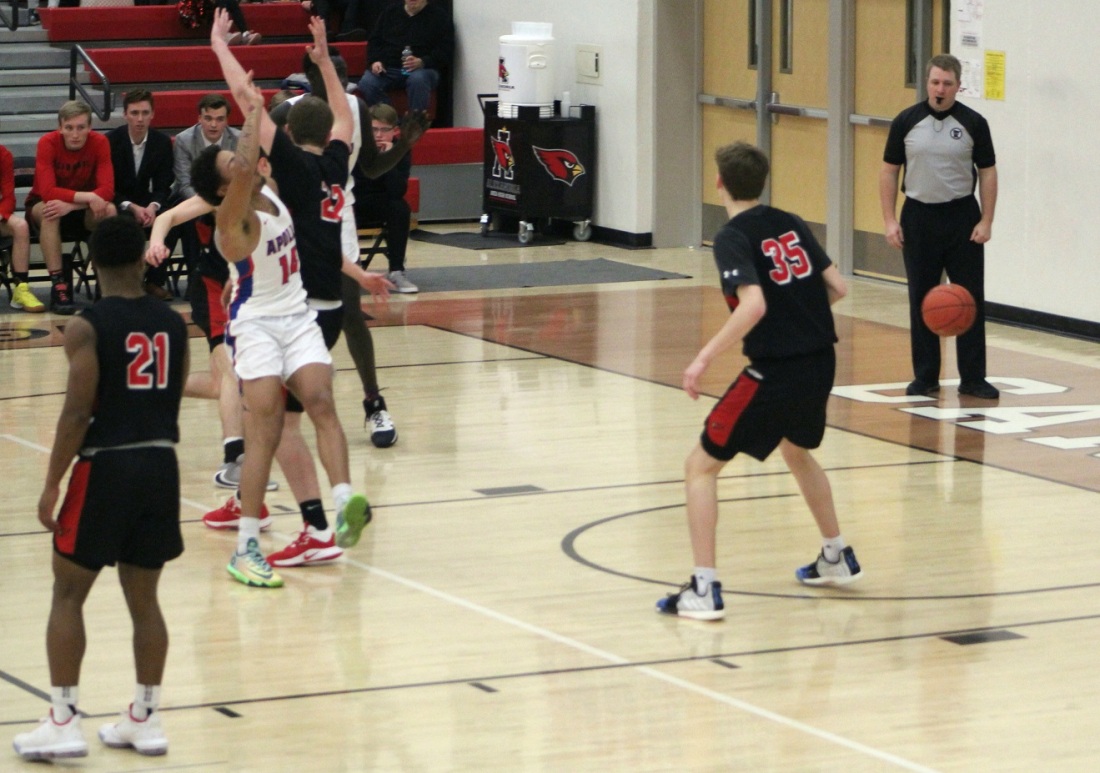 [Where Kristen was the lead offensive player against tall Delano, Colton had that role in this game . . . ]

[Through a variety of shots and drives, Colton had 13 points with 5 minutes left in the half . . . ]

[But the Eagles can score points in bunches and very quickly.  We got sloppy with some passes and they were off to the races . . . ] 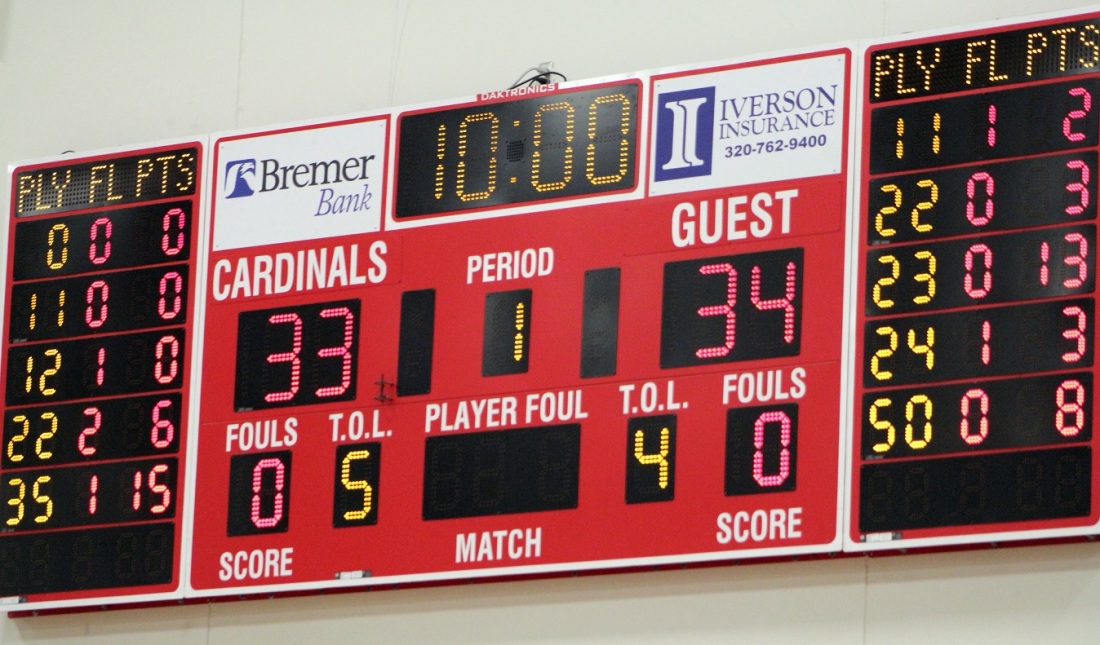 [Then the Cards demonstrated their own Clark Kellogg spurtability by scoring the first 12 points of the 2nd half.  It appeared we were on our way . . . ] 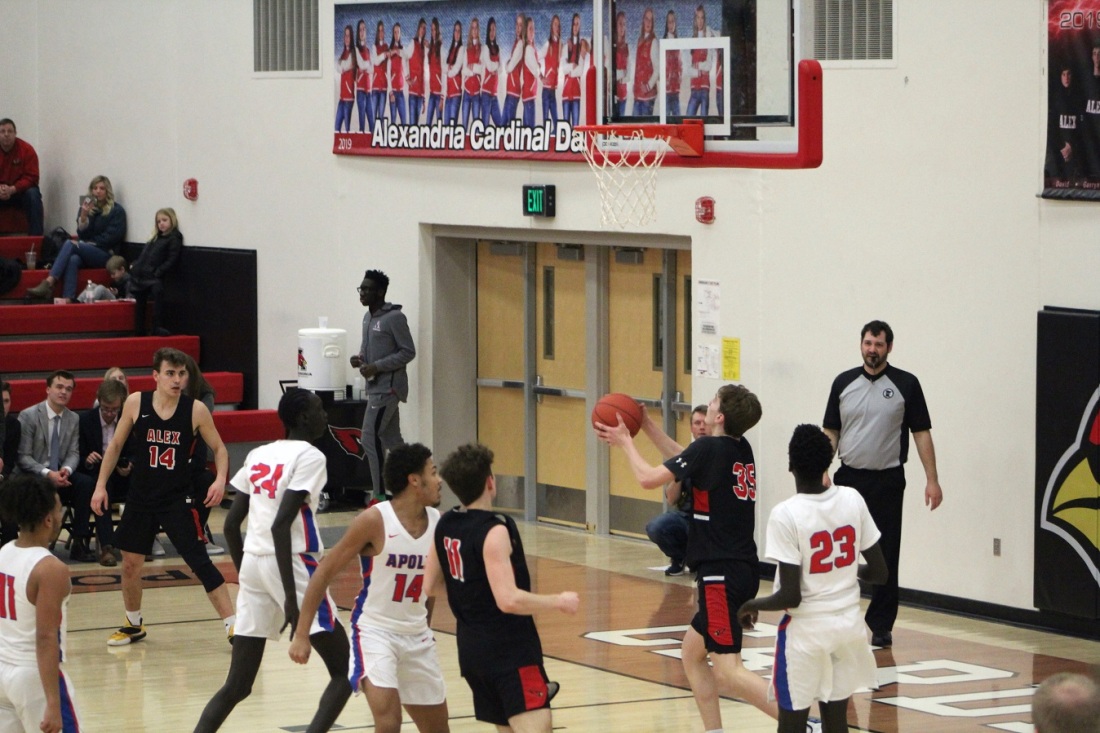 [Carsson at the line – the kind of game where making such was important because with their potent offense the Eagles began reeling us back in . . . ]

[The Colton defense mostly prohibited them from making mad dashes into the offensive zone.  They were really hard to stop from scoring when they came at us with speed . . . ]

[Here’s where Colton really excels.  It’s call the “tear drop”, a difficult shot to master which is why most players try to take it all the way to the basket where they either get their shot blocked or are called for an offensive foul . . . ] 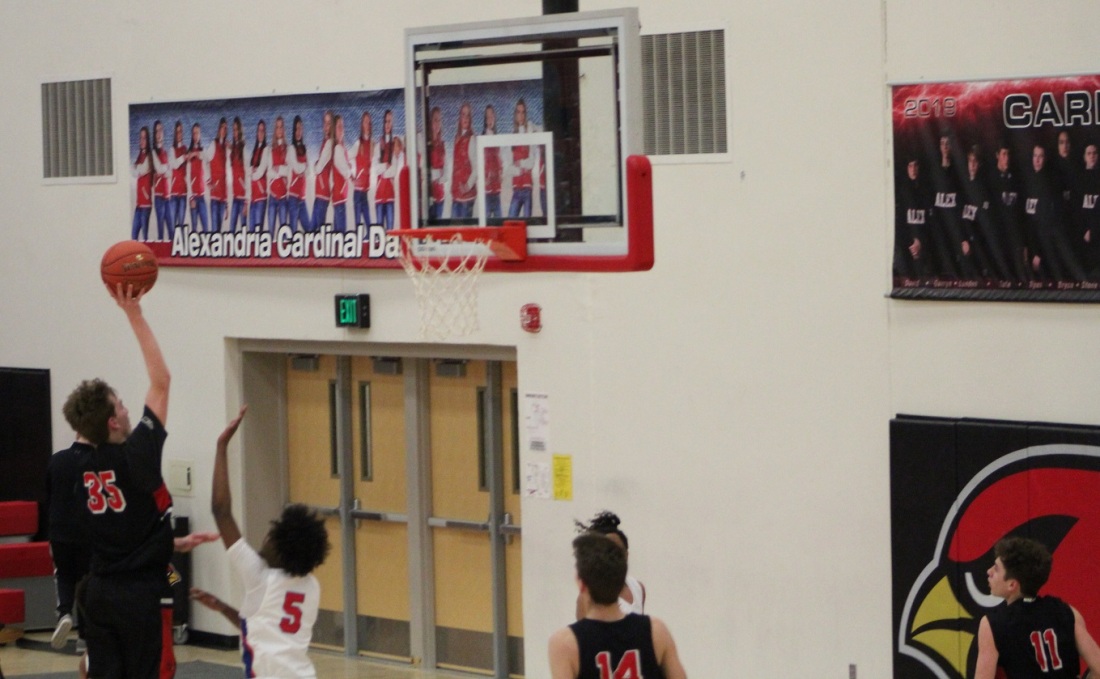 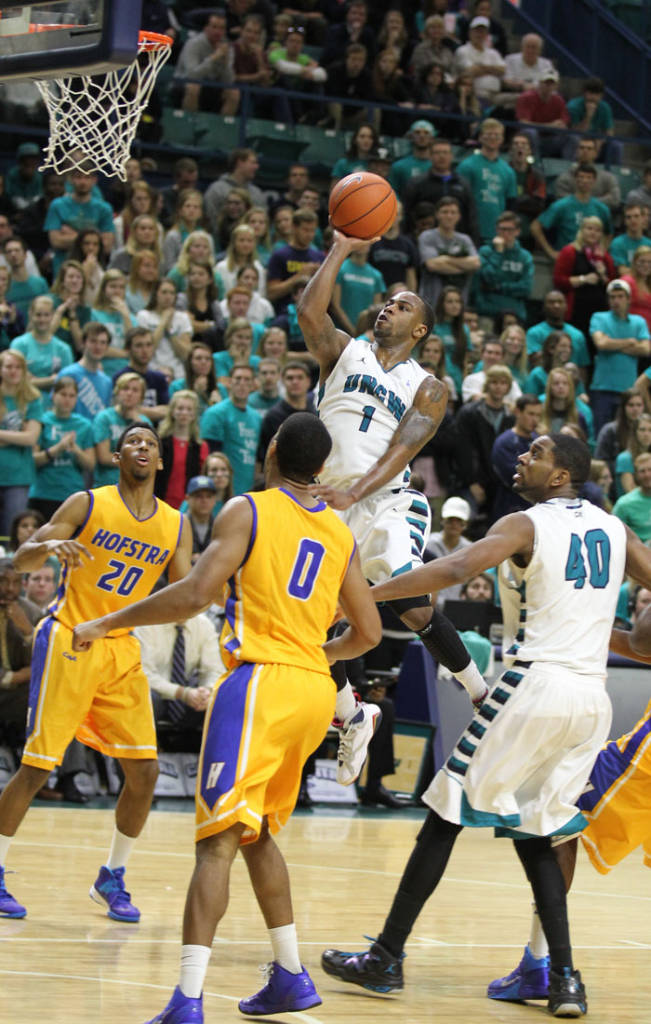 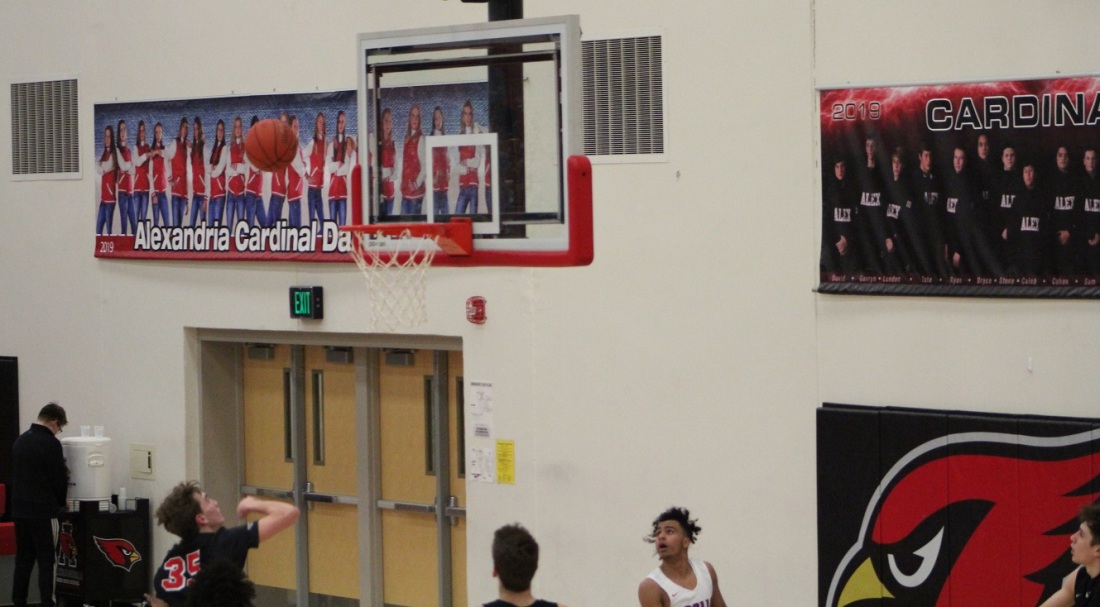 [By his expression he missed this foul shot, but he makes a high percentage . . . ] 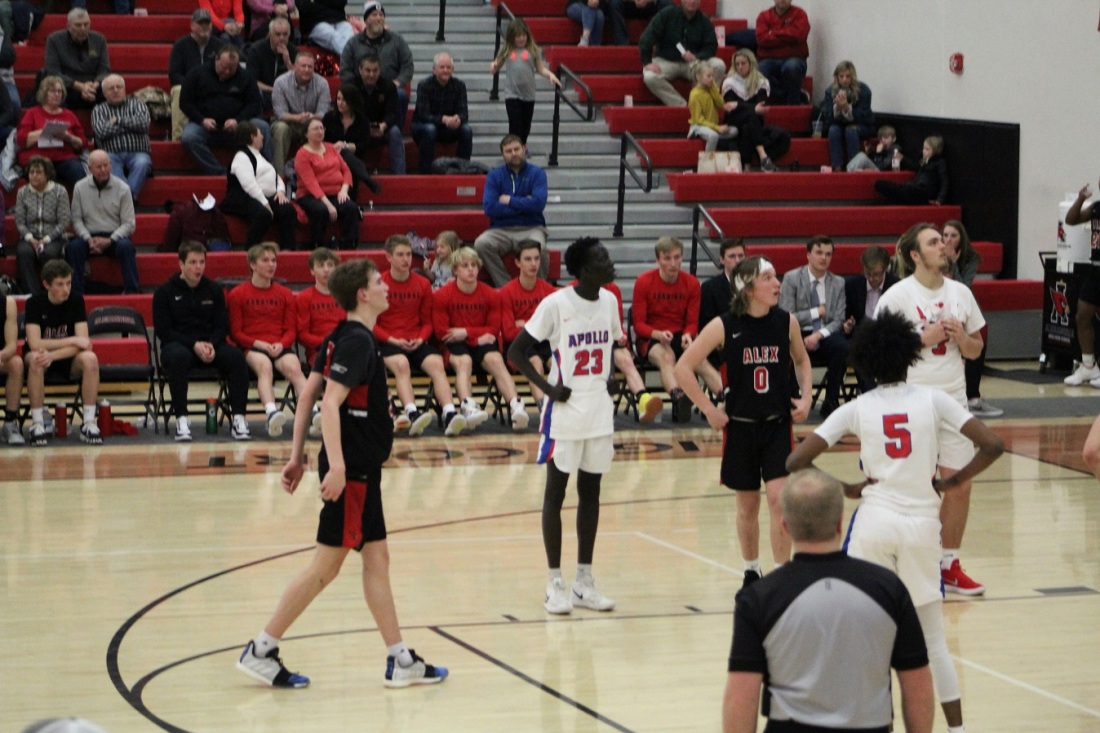 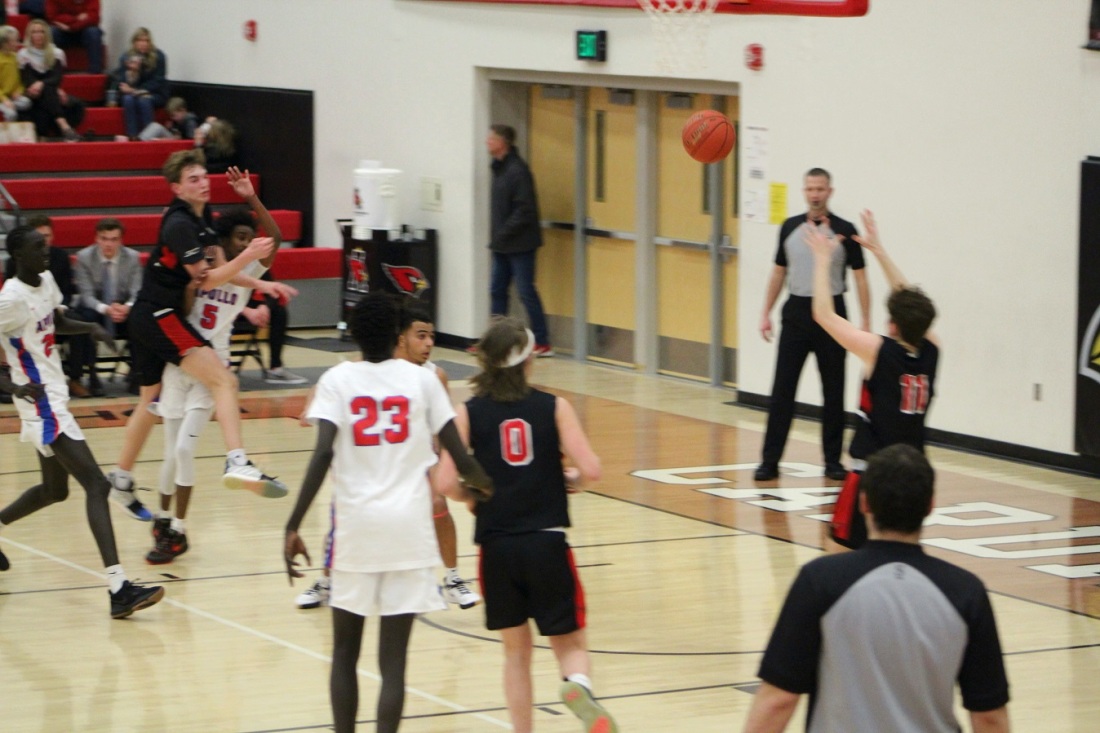 [Where all our guards, despite their size, are good finishers.  At one time on a break in this game Carrson got the ball, faked two different times as two tall guys leapt by him, and then layed it in  . . . ]

[It’s amazing the number of times Colton tips the ball on passes between the guards . . . ] 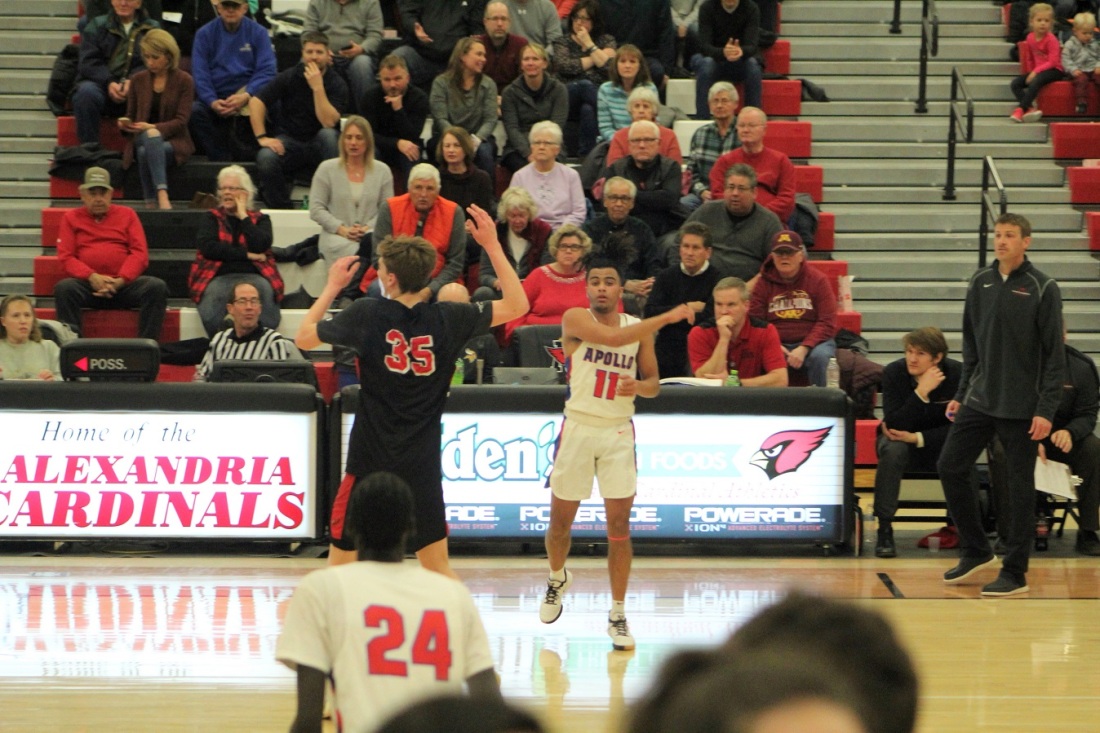 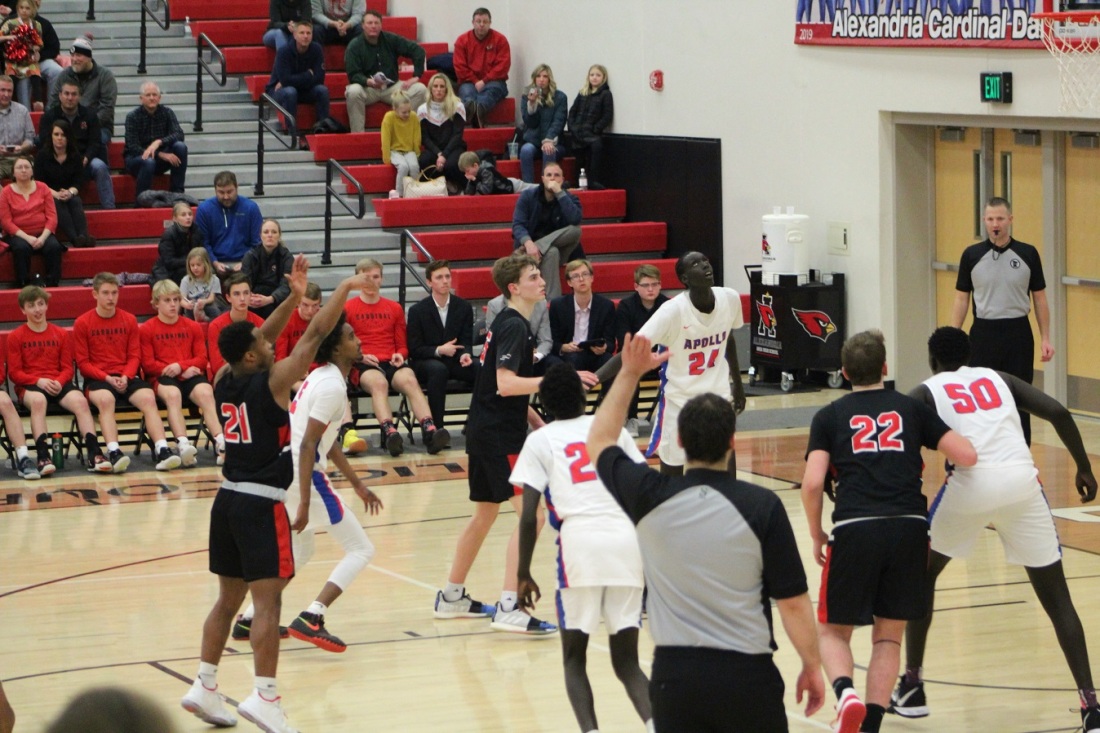 [He sat out a lot in this game, which was unusual?  Not feeling good?]

[Really excited about it!]

When Austin Peay University had a player named Fly Williams, the students would chant, “The Fly is open! Let’s go Peay!

Up Next:  Dunno, I’m kinda caught up?