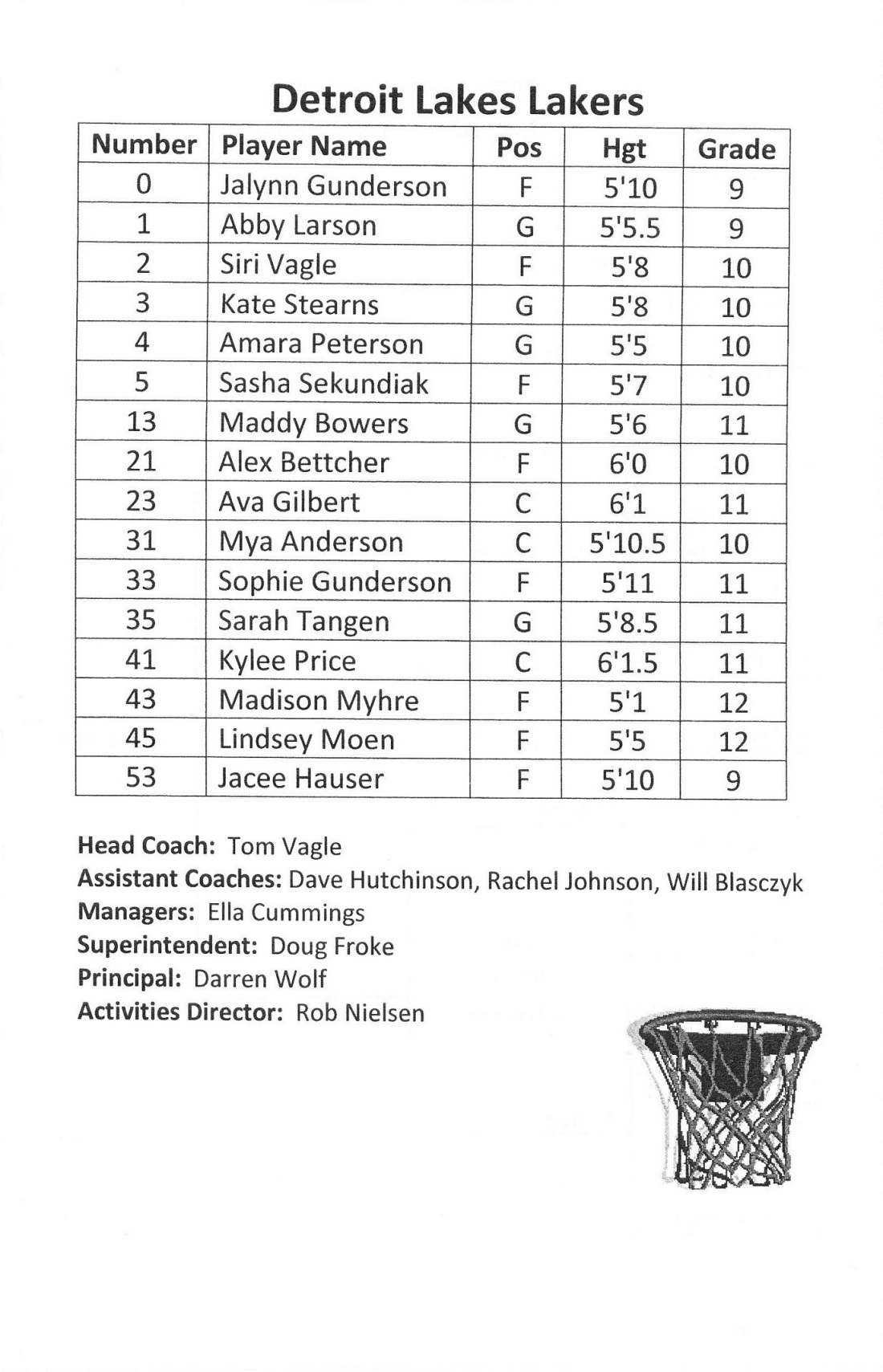 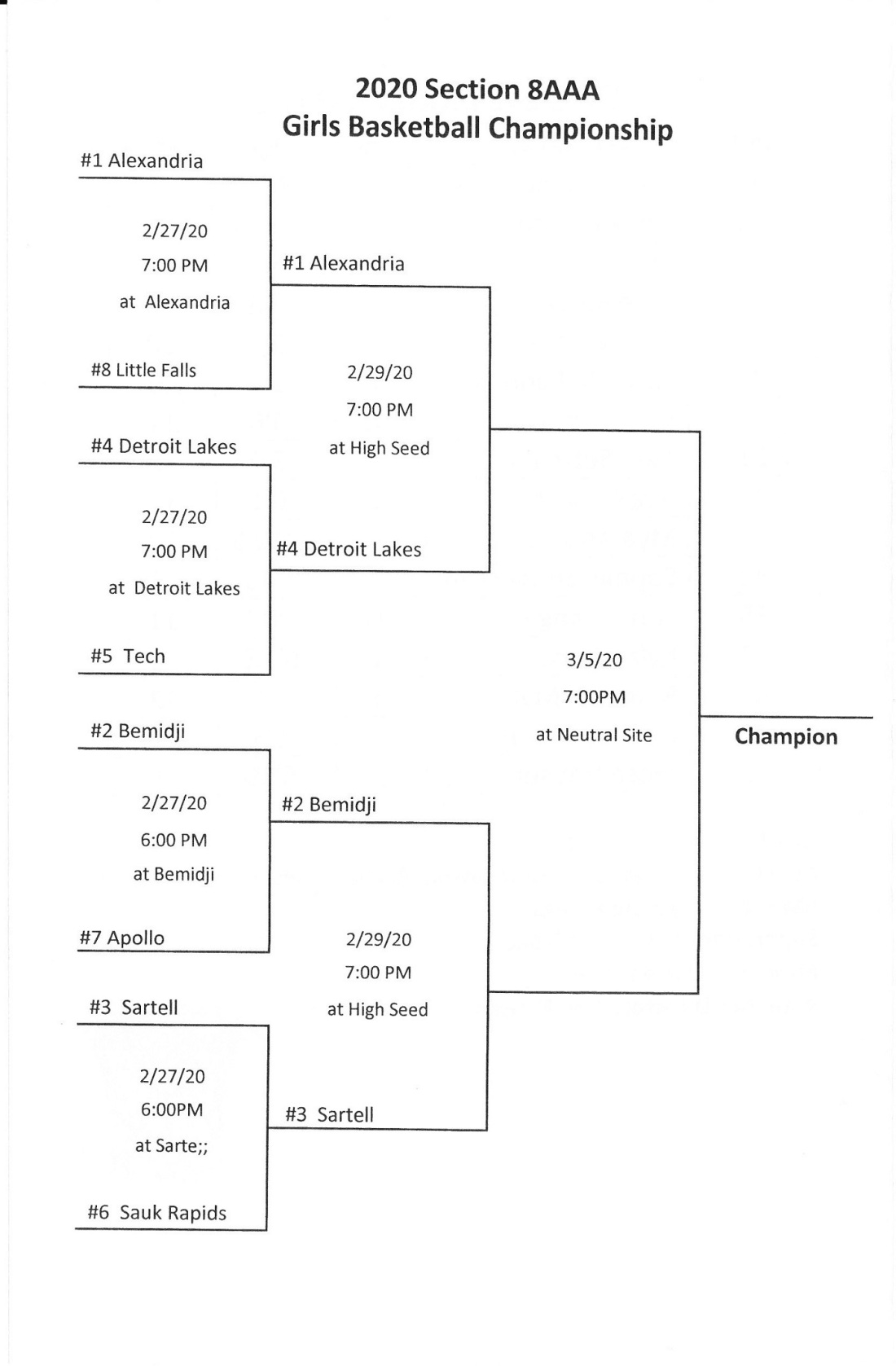 [The refs have the pre-game discussion with the captains.  Then they went on to create a bit of heartburn in the section where I was sitting, which just happened to include the Cardinal moms.  It happens . . . ]

[I offer my apologies for uttering some unkind words in their direction.  It’s just that in a tournament game, a team shouldn’t have half its starters in foul trouble in the first three minutes of the game . . . ]

[Ella Grove, our leading scorer, sat out almost all of the 1st half with two fouls . . . ] 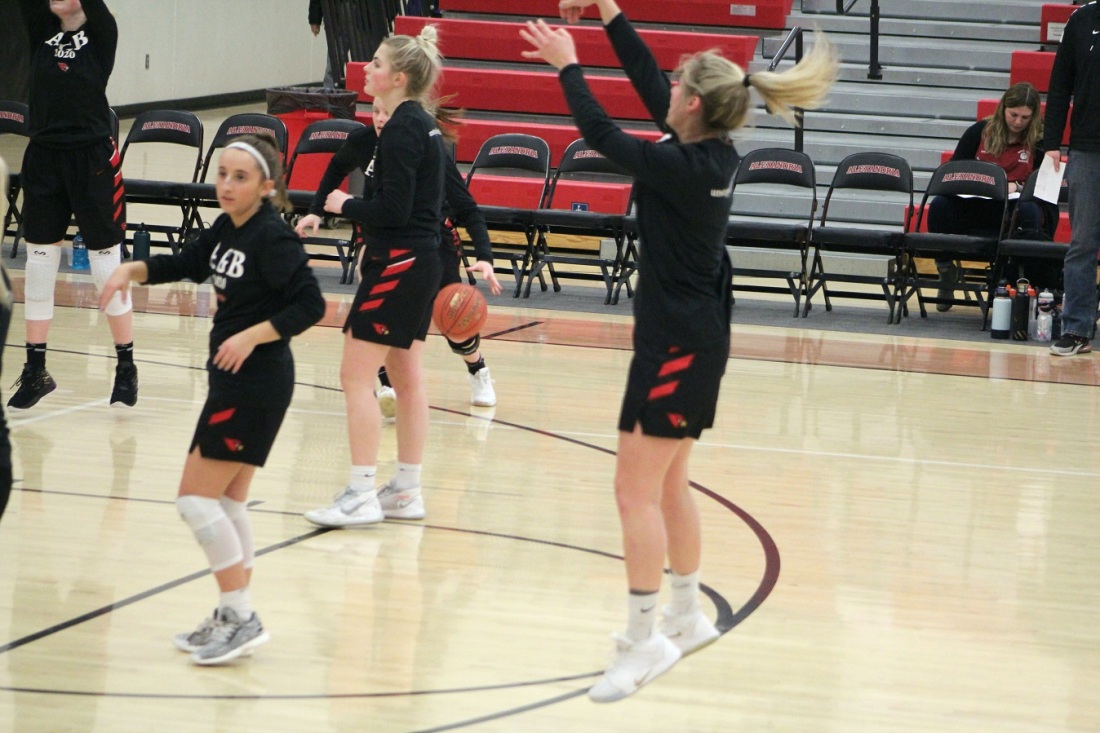 [Coach Kohler visits with the Lakers coach, who must have worked some late season magic with his team . . . ]

[My photo of Cardinal broadcasters DMac and BCun somehow focused on Solveig and Wayne (my high school principal) Elton in the background . . . ]

[Have I made you nervous about the outcome yet?]

[Something was happening as the very young Lakers went on to push us in this game.  Their towering 6′ sophomore center got the tap on the Cardinals’ Alyana Strand (25) to start the game . . . ] 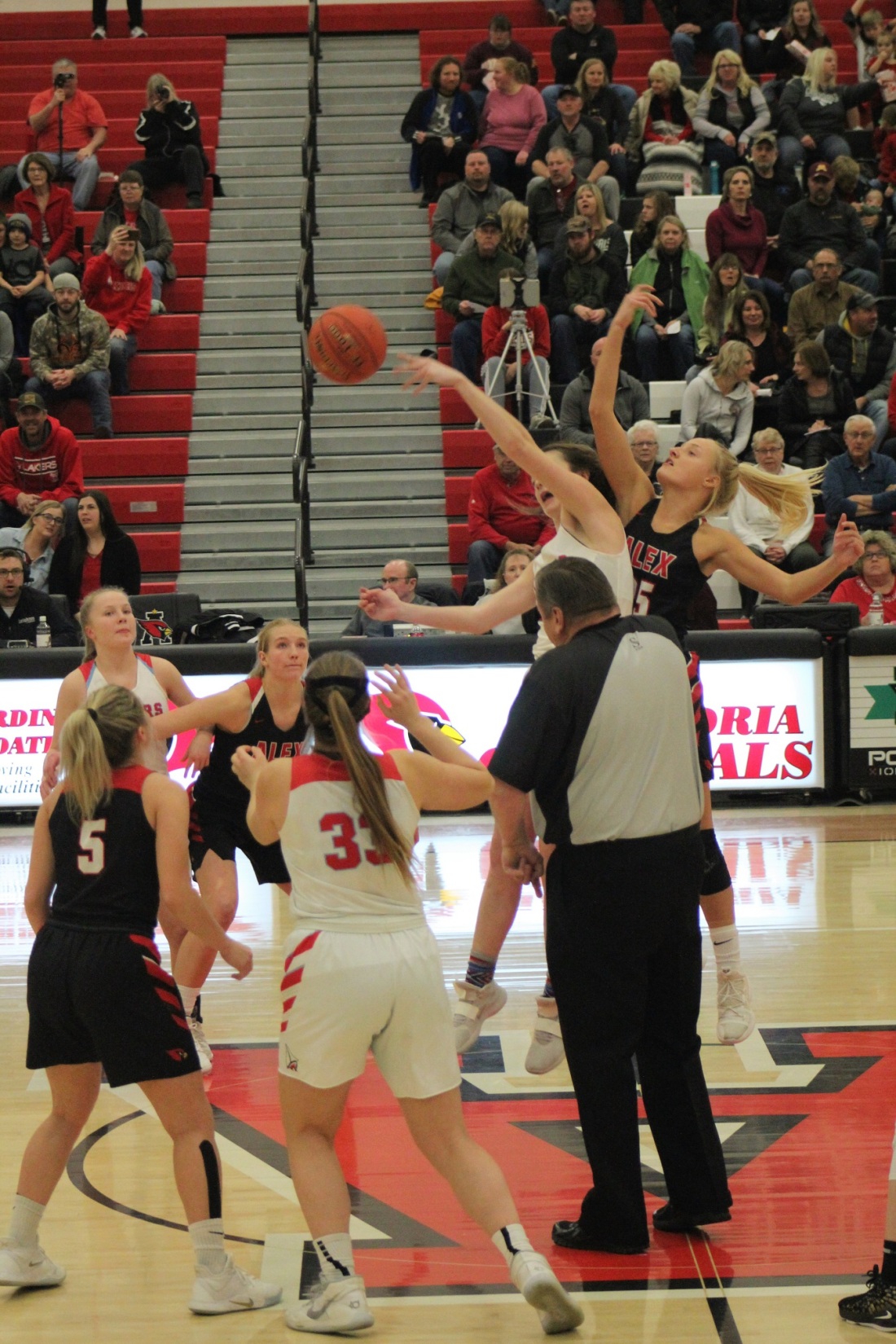 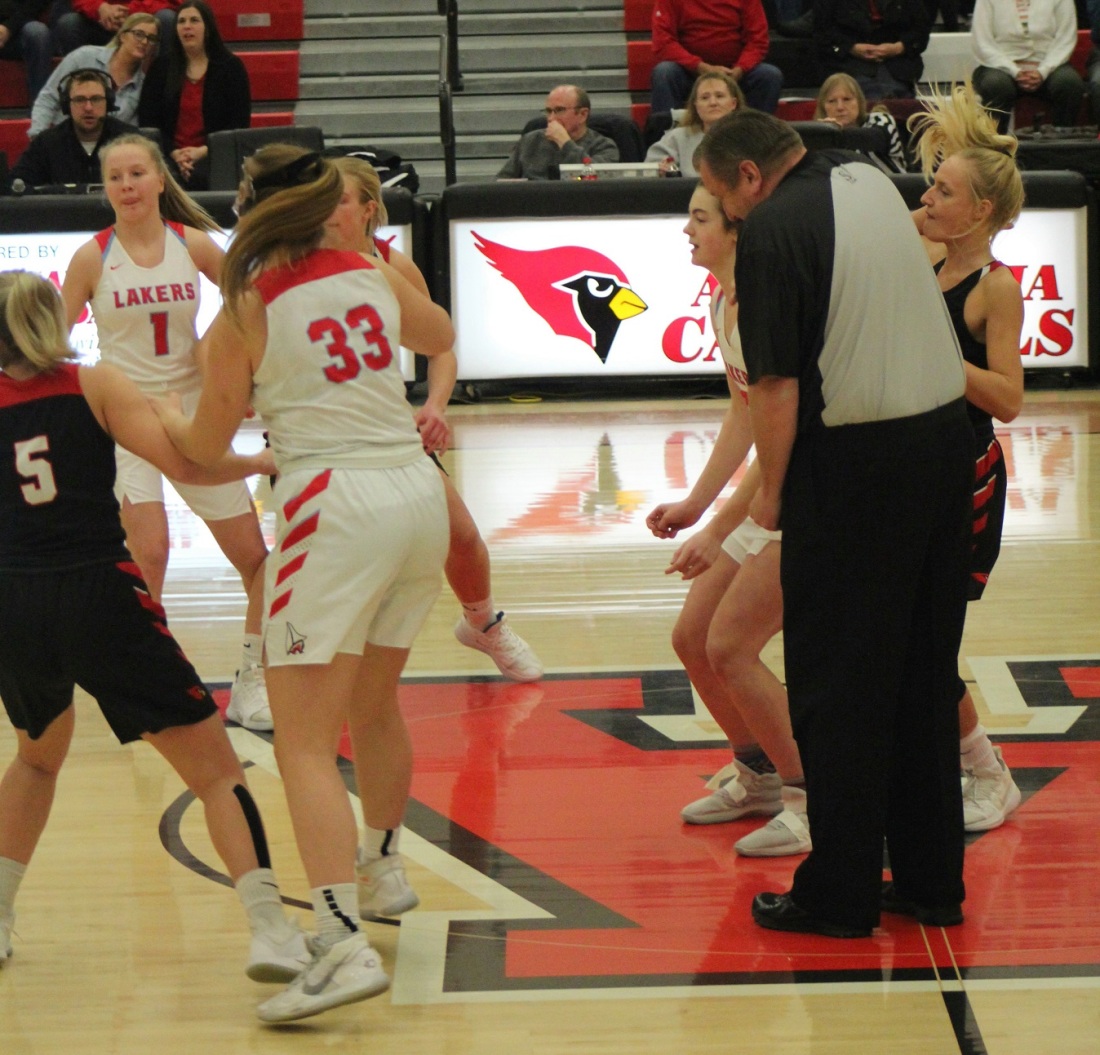 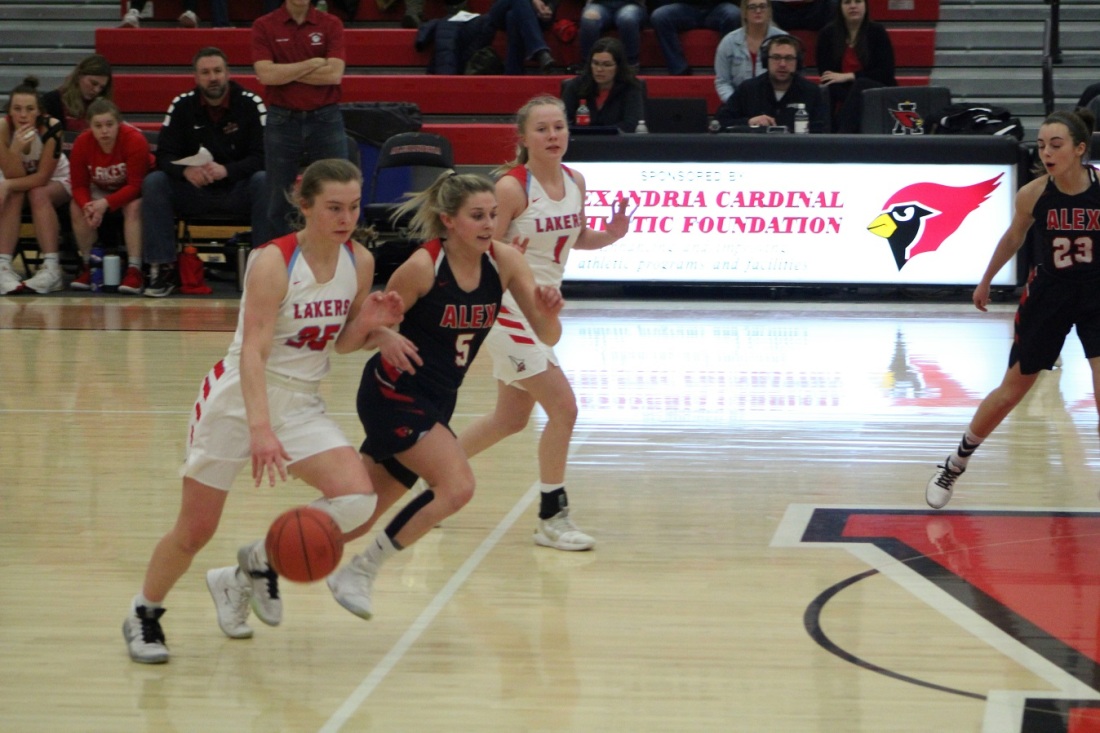 [A hidden Card made a baseline move here.  The other photographer obviously had a better vantage on the action . . . ] 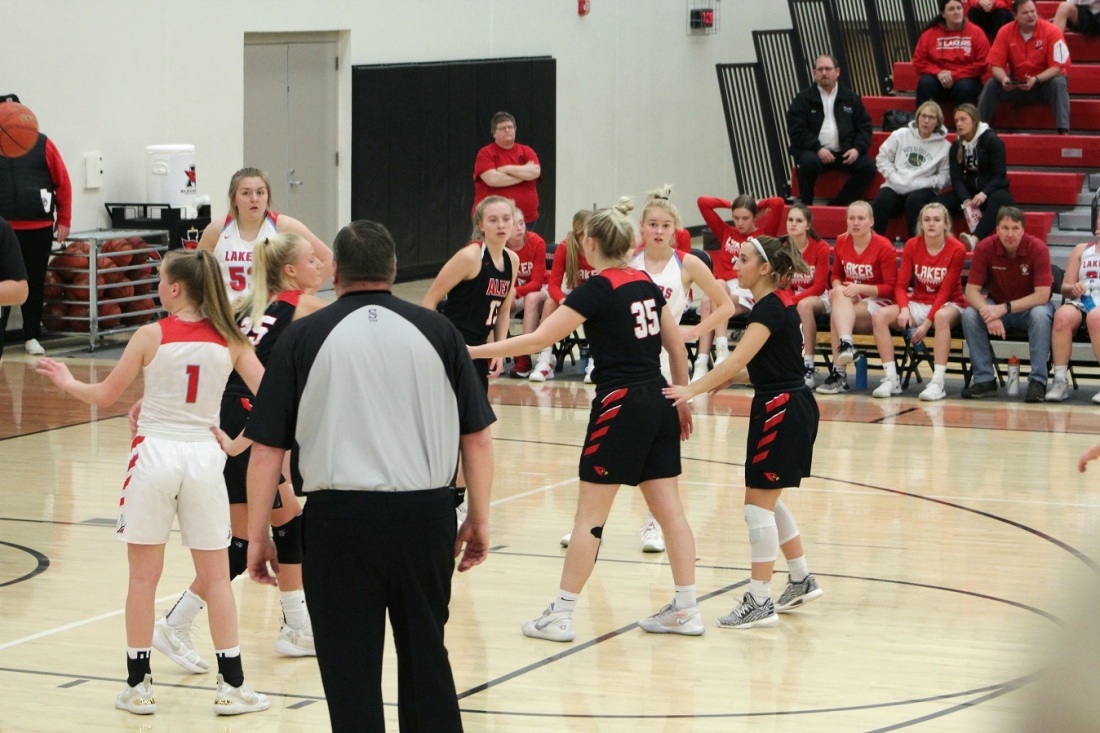 [Myah also had one of her best games.  As I recall she was perfect from the free throw line.  She and Mataya have grown into their roles as speed dribblers to help break any pressure.  Cate Bloom (21) in rebound position is another of the 9 starters.  Other than for Ella and Mia, the other 7 seem to get about equal amounts of PT . . . ] 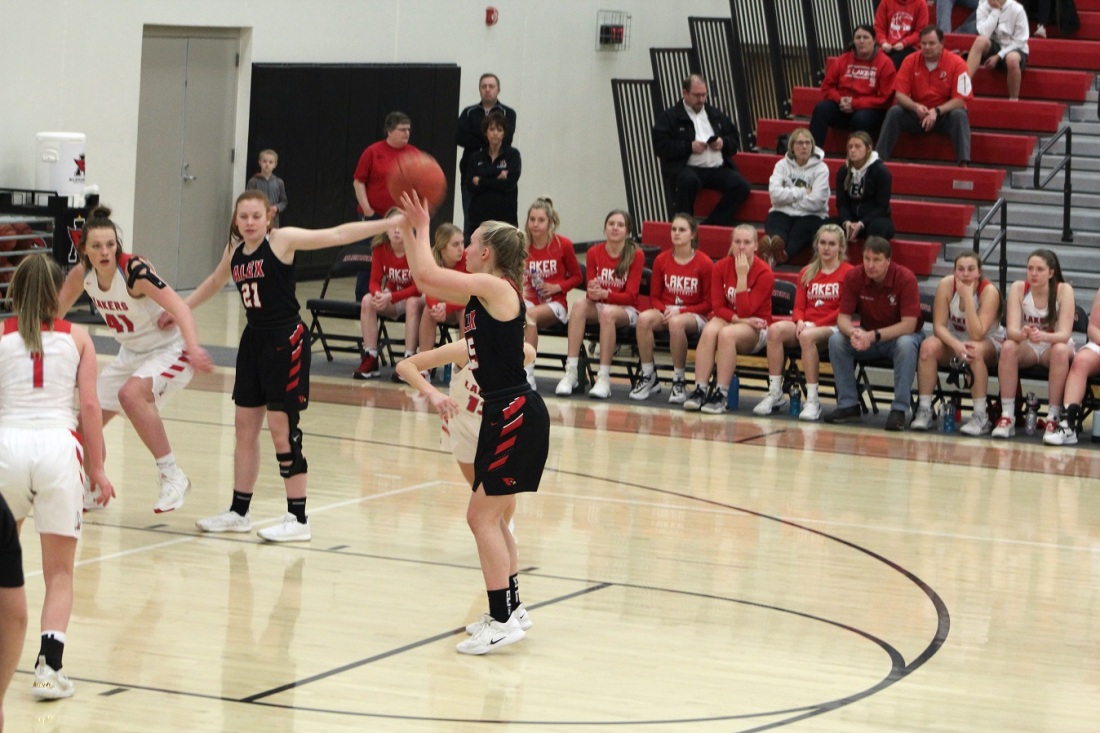 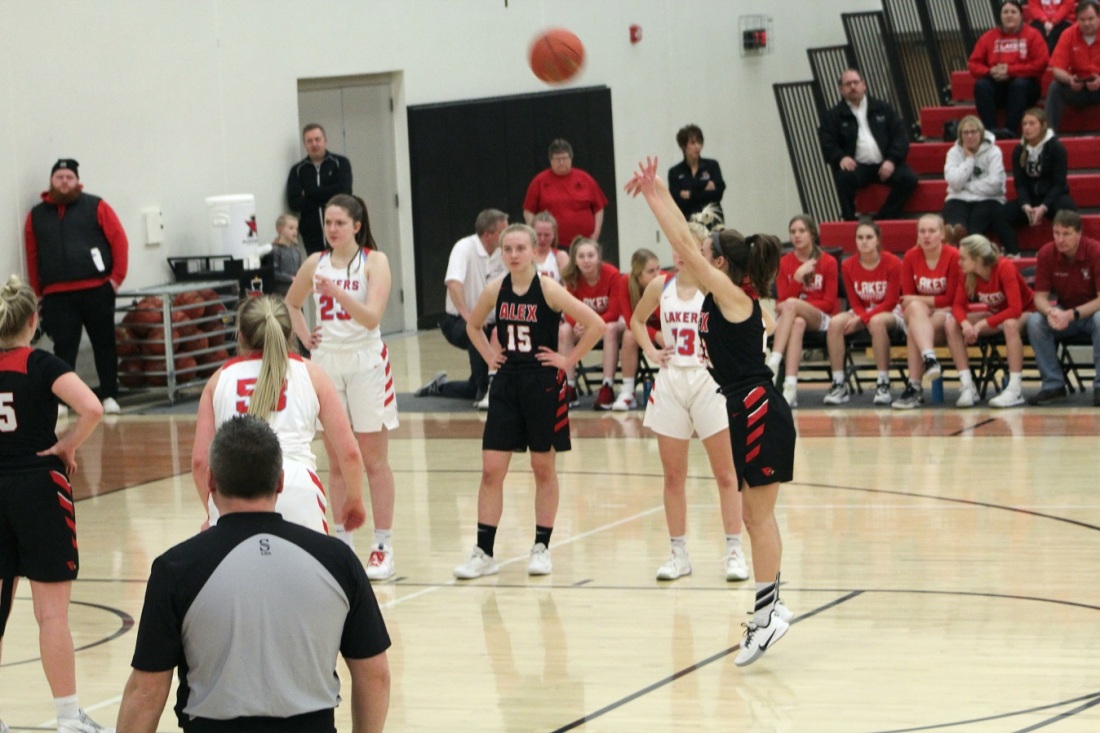 [Since we’re now going in the other direction, you may correctly assume we’re in the 2nd half.  And now the Cards had a well-rested Ella, and she made sure the team was going to expand on their too close 35-33 halftime lead . . . ]

[And to the surprise of at least me, she scored her 1,000th career point along the way, which led to a celebratory stoppage of play . . . ]

[I think it cool that on the next shot the camera auto-focused on the clapping hands . . . ] 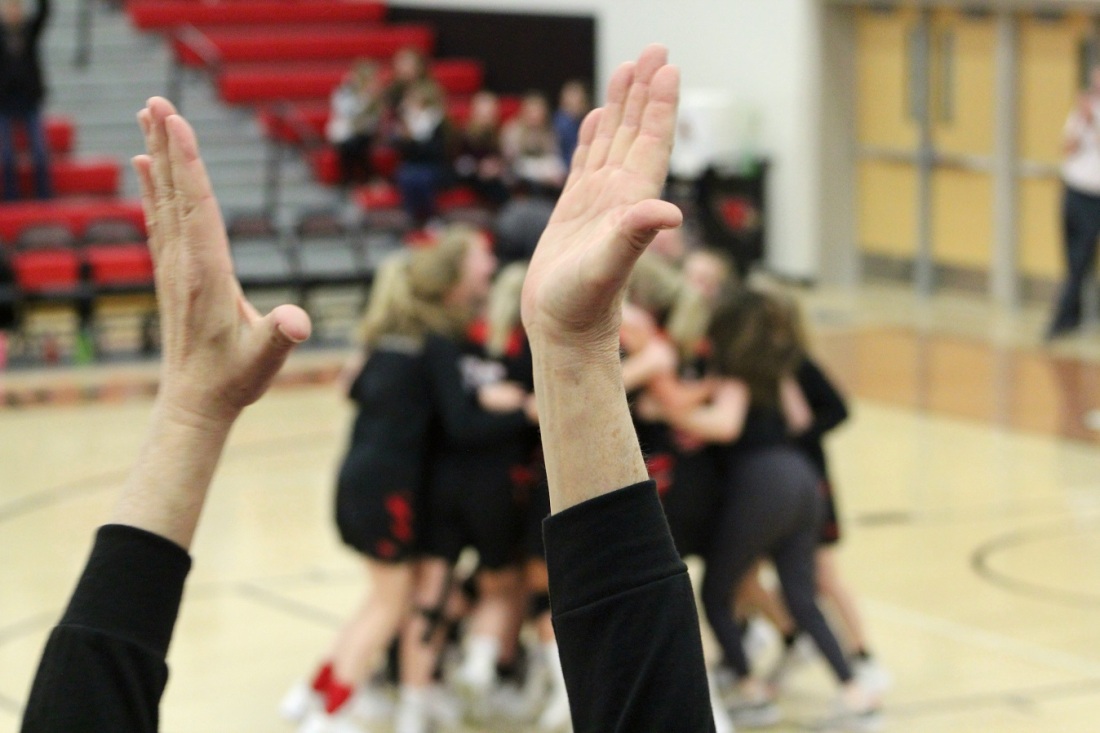 [Congratulations to Ella on a terrific high school career . . . ] 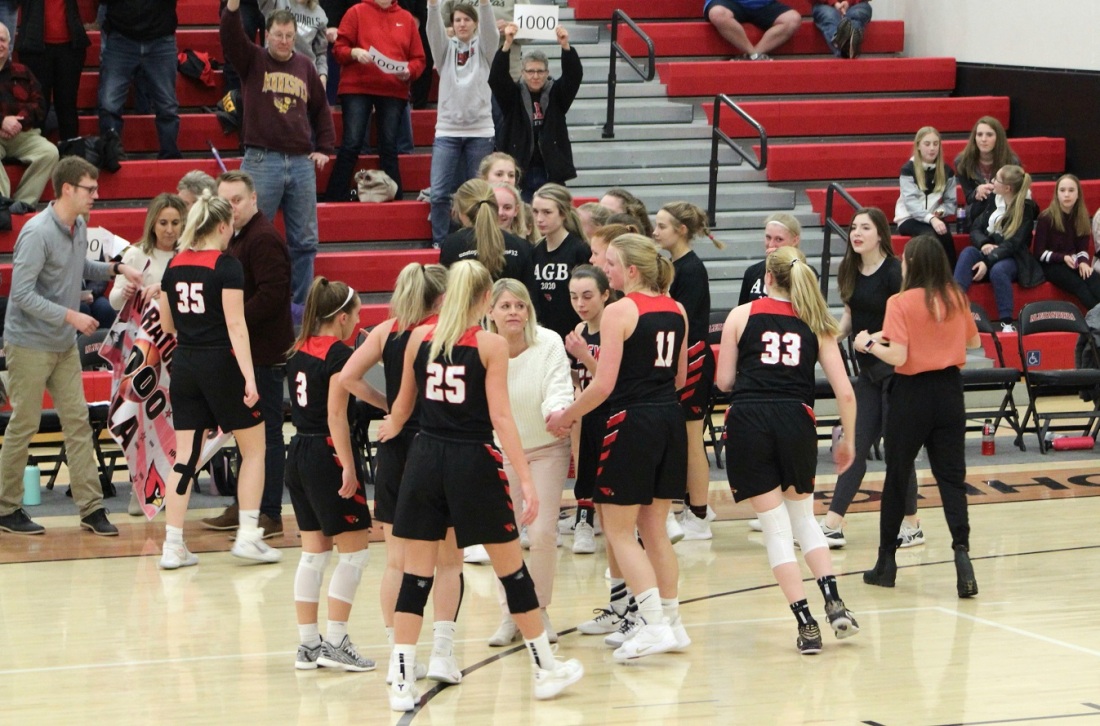 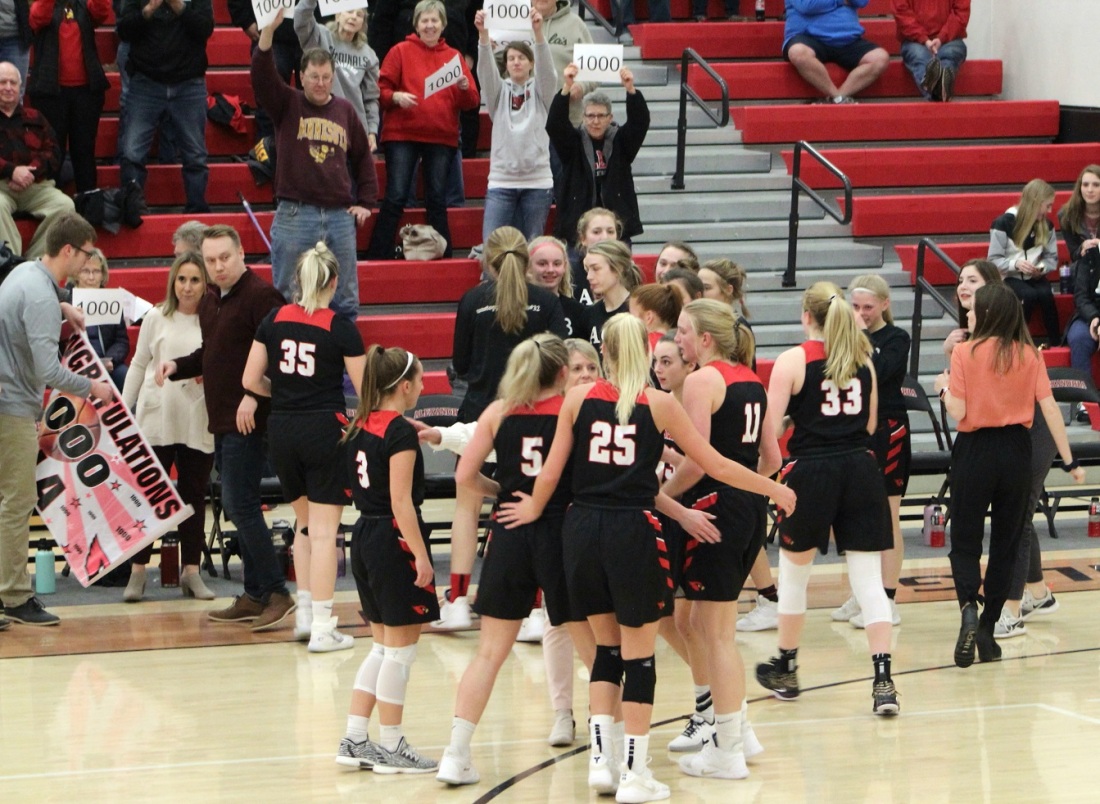 [Here’s Summer, who like her teammates was clutch down the stretch.  Free throw shooting should be an asset for us down the line . . . ] 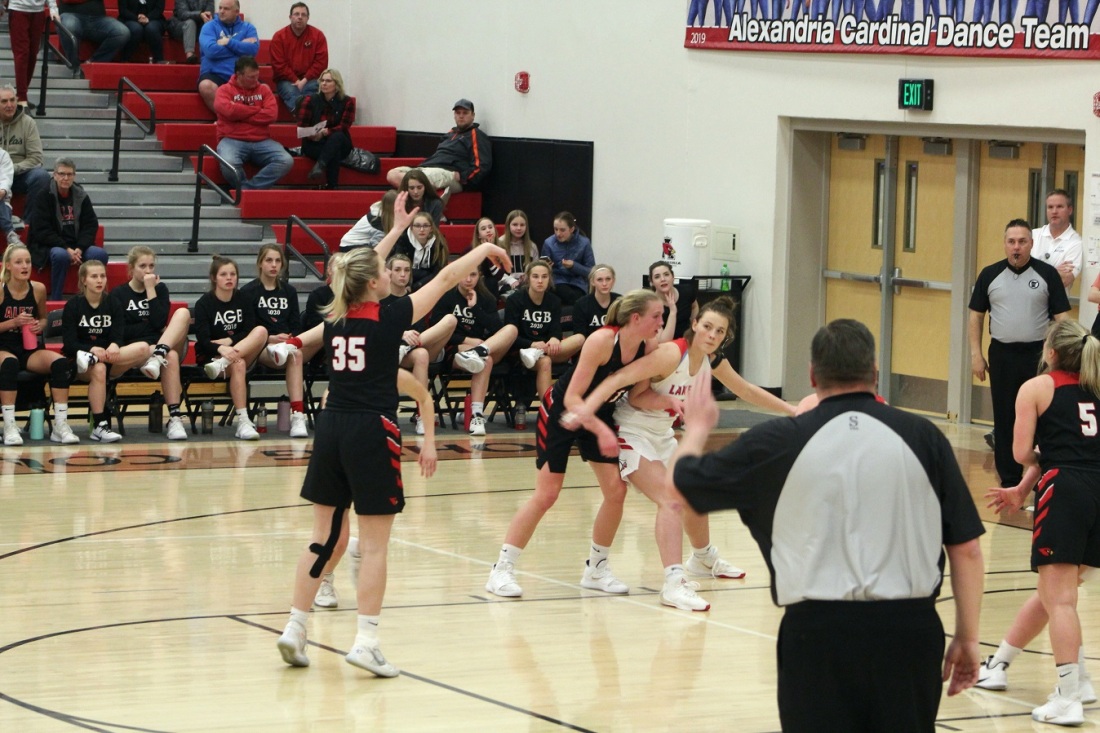 [To paraphrase Paul Wellstone, we all do better when we press together.  When the Cards really get after it, the loyal opposition will be in trouble.  But even with 9 starters, it’s hard to keep that intensity for the entire game . . . ]

[Here’s an example.  The Lakers freshman point guard, No. 1, is now very good and will get better, but she’s headed for trouble here . . . ]

[Mataya and Mia have her pinned between the sideline and the centerline . . . ] 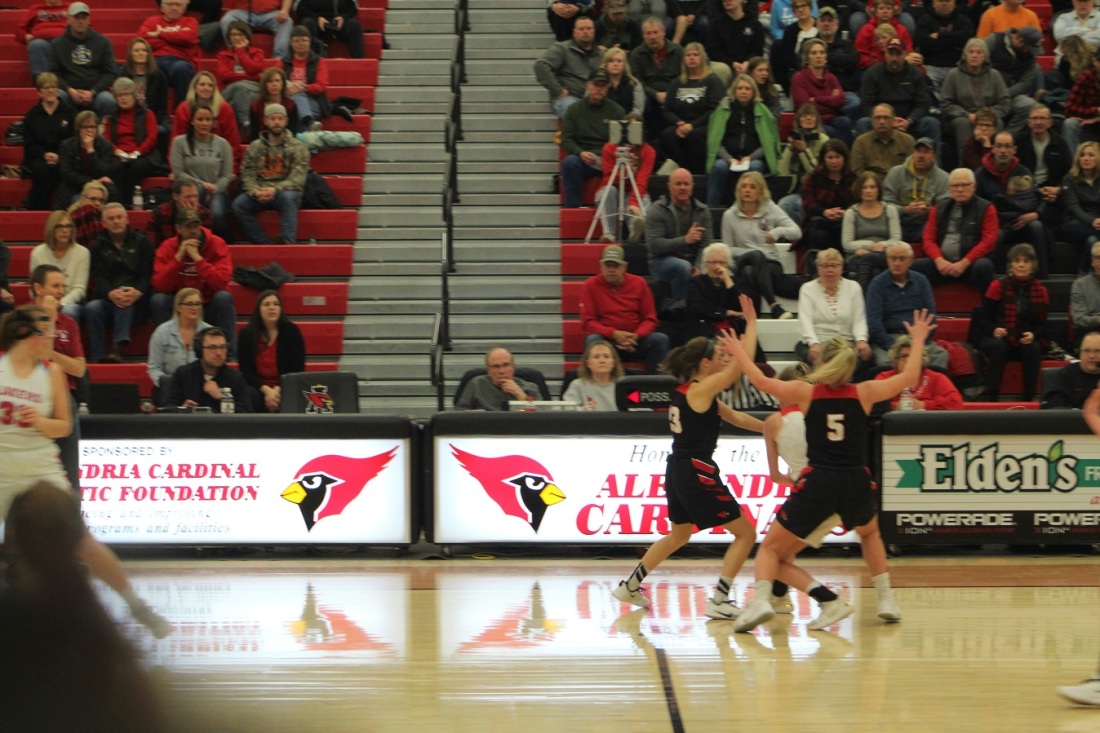 [The Lakers put a scare into us, but now it’s on to Detroit Lakes to play Bemidji for the section championship on Thursday, March 5 . . . ]

The grass is always greener where you water it.  ~  Unknown

Up Next:  A basketball game, likely