The older I get, the more I realize it’s all just about food.  ~  Me

If you remember the pandemic, you’ll recall the quarantine began in March.  That was still winter.  There was no outdoor dining then.  Indoor restaurant dining was out of the question (and it appears it will be such for the foreseeable future).  With warmer weather came the option of eating outdoors.  The Super and I soon discovered we were then eating “out” as often as ever.  Wednesdays became particularly onerous.  Current and past members, and the cast and crew, of the senior men’s morning leagues at the Alexandria Golf Club have been dining together on Wednesdays for several years.  And now also on Wednesdays, we have the Alexandria Community Wood Fired Pizza night at the Methodist Church, each time sponsoring a local activity or association.  So we eat first at the AGC, then dash over to pick up a pizza (and a dessert pizza) for eating the next day.  Uff da!!

[Chef Pat addresses the hungry seniors on the AGC deck.  He always asks what we’ll want for the next Wednesday.  After the beef commercial this week, meat loaf is up next . . . ]

[So many thanks to Pat, and to our servers this year who somehow always manage to put up with us – Karli, Taylor, and Talia (the latter two now heading back to college) . . . ] 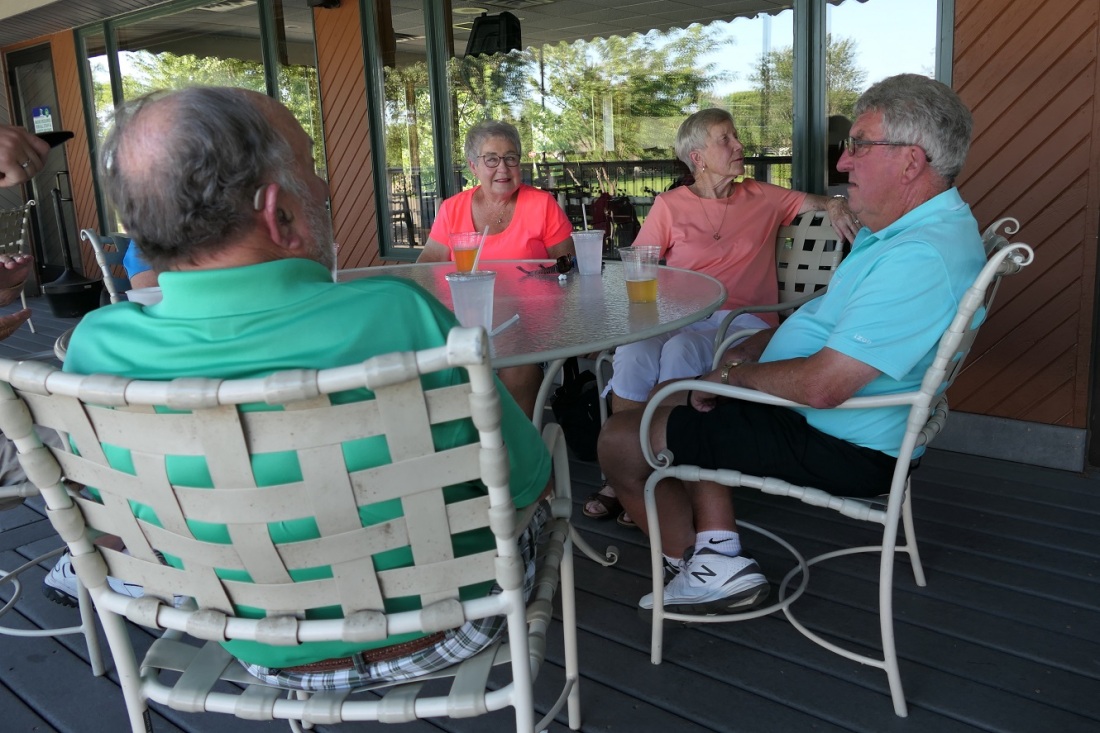 [But continuing on with the smart phone camera . . . ] 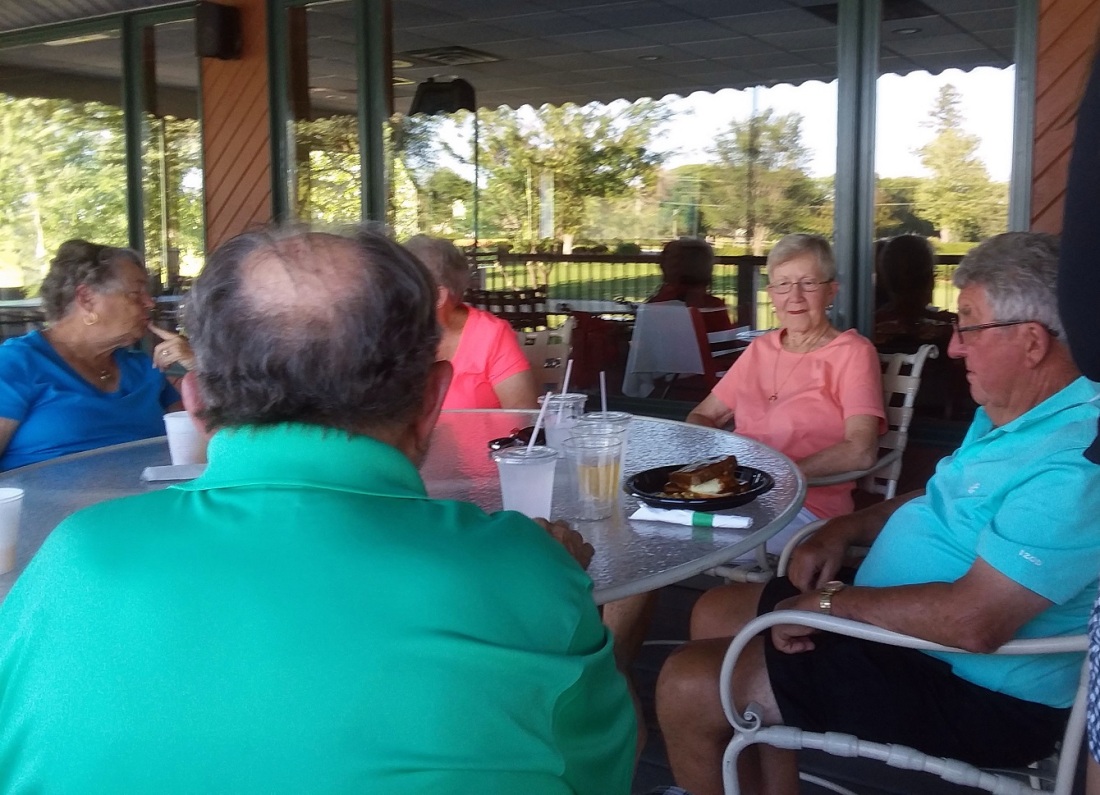 Ask not what you can do for your country.  Ask what’s for lunch.  ~  Orson Welles

I went into McDonald’s yesterday and said, “I’d like some fries.” And the girl behind the counter says, “Would you like fries with that?”  ~  Jay Leno

Anybody who believes that the way to a man’s heart is through his stomach flunked geography.  ~  Robert Byrne

[This evening was on behalf of the high school football team.  The idea now is to see if they can play in the spring . . . ]

[Our other star with his paddle in the oven is John Heydt.  John and Keven Jansen built the oven and created this program.  Kudos to them.  And John has a grandson on the football team (and also in 3 other sports) . . . ] 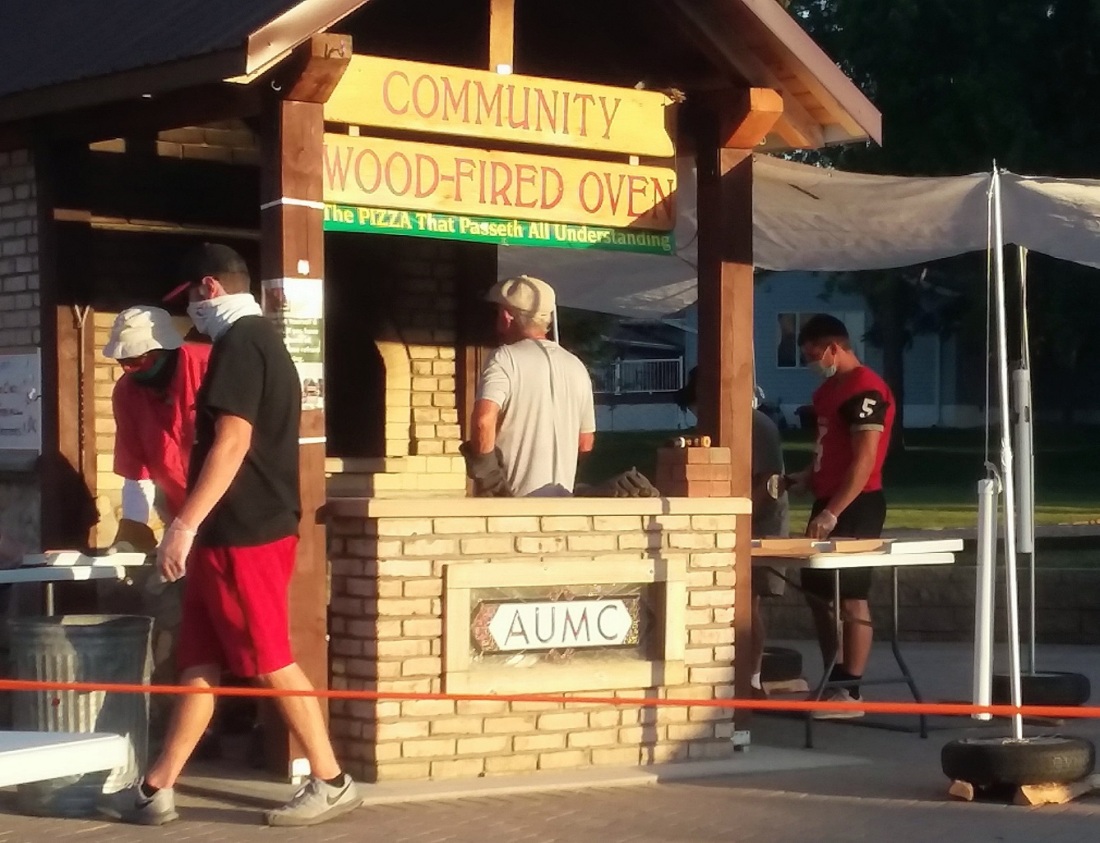 Why does man kill? He kills for food. And not only food: frequently there must be a beverage.  ~  Woody Allen 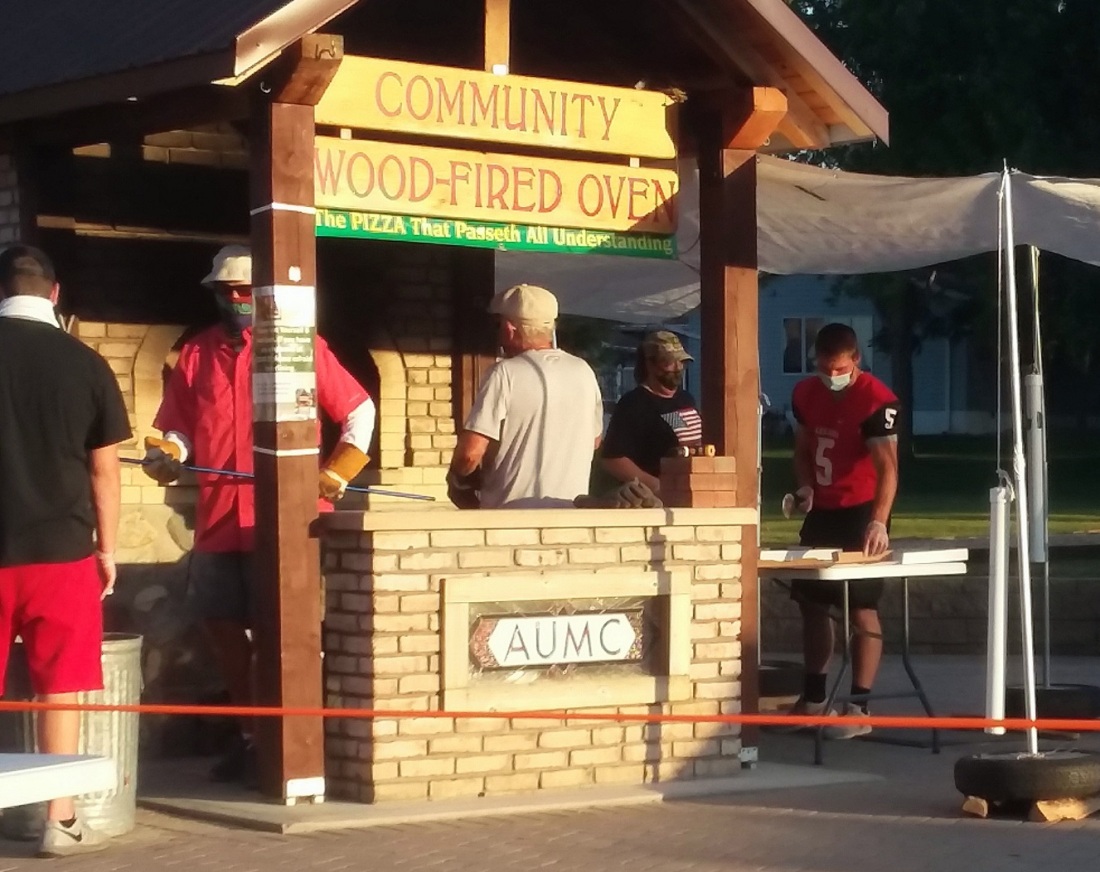 Fish is the only food that is considered spoiled once it smells like what it is.  ~ P.J. O’Rourke 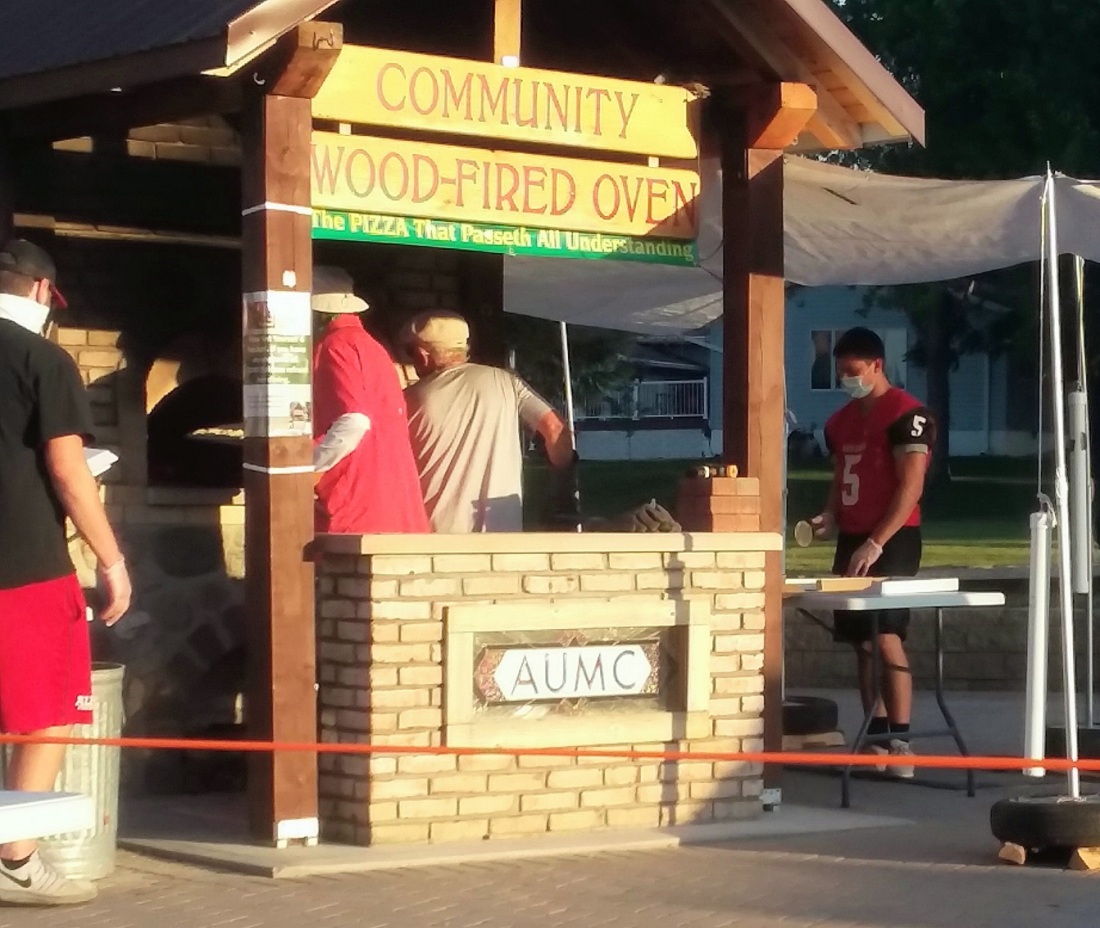 [John was busy and thus always kept his good side toward me . . . ]

How can a nation be great if its bread tastes like Kleenex.  ~  Julia Child 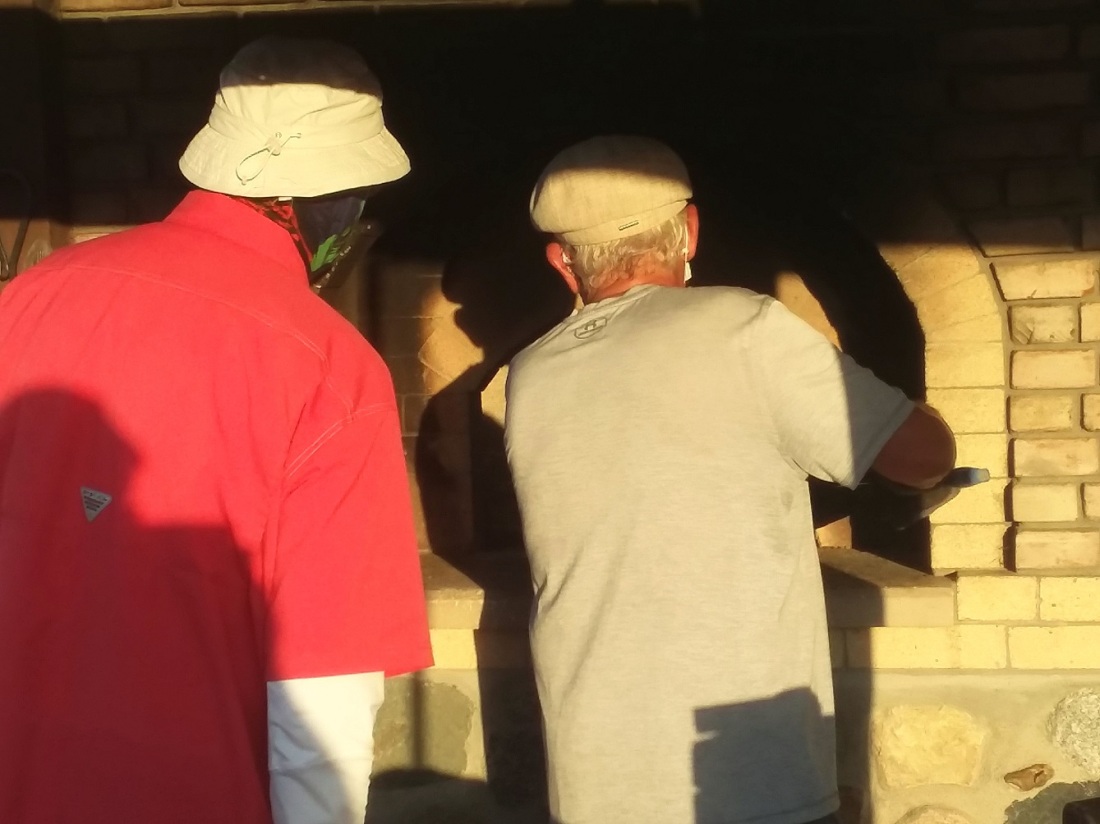 Red meat is not bad for you. Now, blue-green meat – that’s bad for you!  ~  Tom Smothers

You better cut the pizza in four pieces, because I’m not hungry enough to eat six.  ~  Yogi Berra

[This is a 6 1/2 minute highlight video of Nolan in action.  It’s worth watching the whole thing.  Just click on the first one that appears after you click on the URL below.]

[BTW, the last run on the video was the Cardinals first play of the year (happened right in front of me).  Just held Buffalo, with the top quarterback in the state, to a 3-and-out.  After receiving punt, Nolan took a hand off on first down and went the distance.]

[This was re-entered because the last photo is the one that automatically gets featured in the Facebook post . . . ]

The most remarkable thing about my mother is that for thirty years she served the family nothing but leftovers. The original meal has never been found.  ~  Calvin Trillin

My mom made two dishes: Take it or Leave it.  Stephen Wright