OK, here comes your highlight reel of outdoor scenery, the Swiss Lakes, the Jungfrau region, and the Matterhorn . . .

Switzerland is a place where they don’t like to fight, so they get people to do their fighting for them while they ski and eat chocolate.  ~  Larry David

[The Jungfrau region is part of the canton of Bern and it encompasses a portion of the Swiss Alps, including the Jungfrau massif, Lauterbrunnen Valley, Interlaken, Lake Brienz and Lake Thun, and extends west to Adelboden and Gstaad (earthtrekkers.com).] 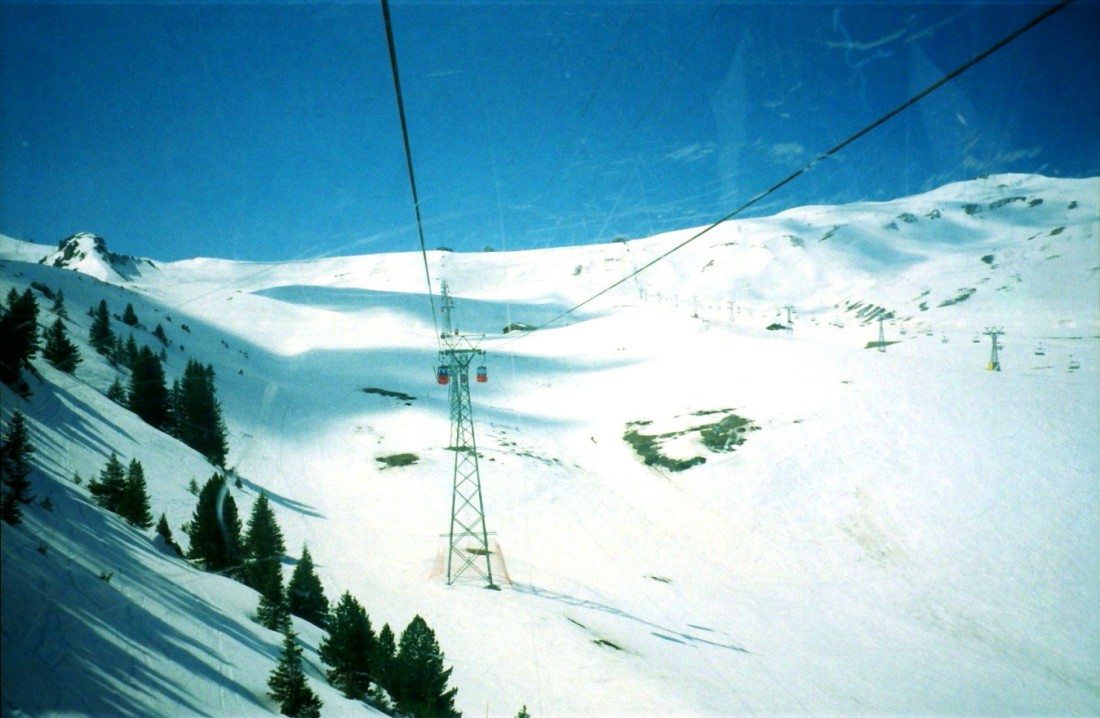 [I’m so ecstatic to be riding the GGM!]

[Meanwhile, back on the ground, I always remember this photo of Thun as one of my all-time favorites . . . ]

[The cable car has landed.  The Männlichen is a 2,343-metre (7,687 ft) mountain in the Swiss Alps located within the Canton of Berne.  It can be reached from the new (December 2019) Grindelwald Terminal station using the Grindelwald–Männlichen gondola cableway (GM).  It then takes 15 minutes to walk to the summit.  It is a popular viewpoint over the Lauterbrunnen valley and a popular start location for hikers and skiers  (Wikipedia).]

[The aforementioned view of the Lauterbrunnen valley below.  I get acrophobia just looking at the photo . . . ]

[‘Twas a lovely day, obviously!  So lovely I seem to recall folks taking in the sun on the lounge chairs in their swimsuits (unfortunately, no photographic proof).  Based on the map above, I think we have the Eiger and the Monch as the lead characters in the background.  Remember Clint Eastwood’s movie, “The Eiger Sanction”?] 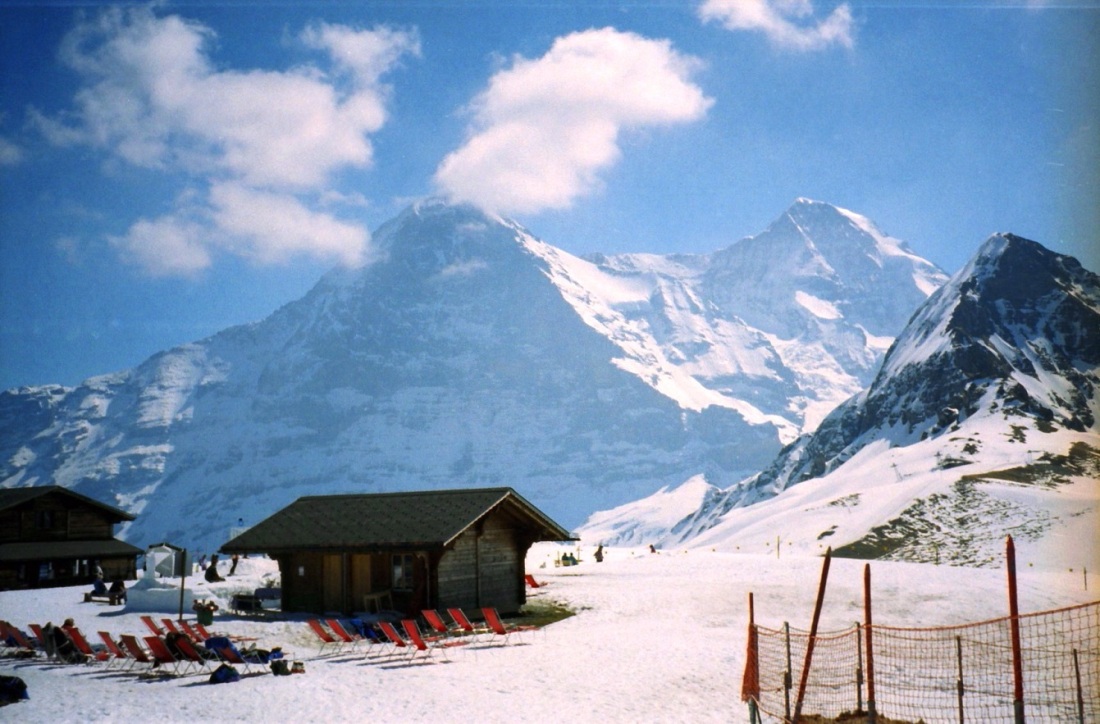 I’ve always wanted to go to Switzerland to see what the army does with those wee red knives.  ~  Billy Connolly 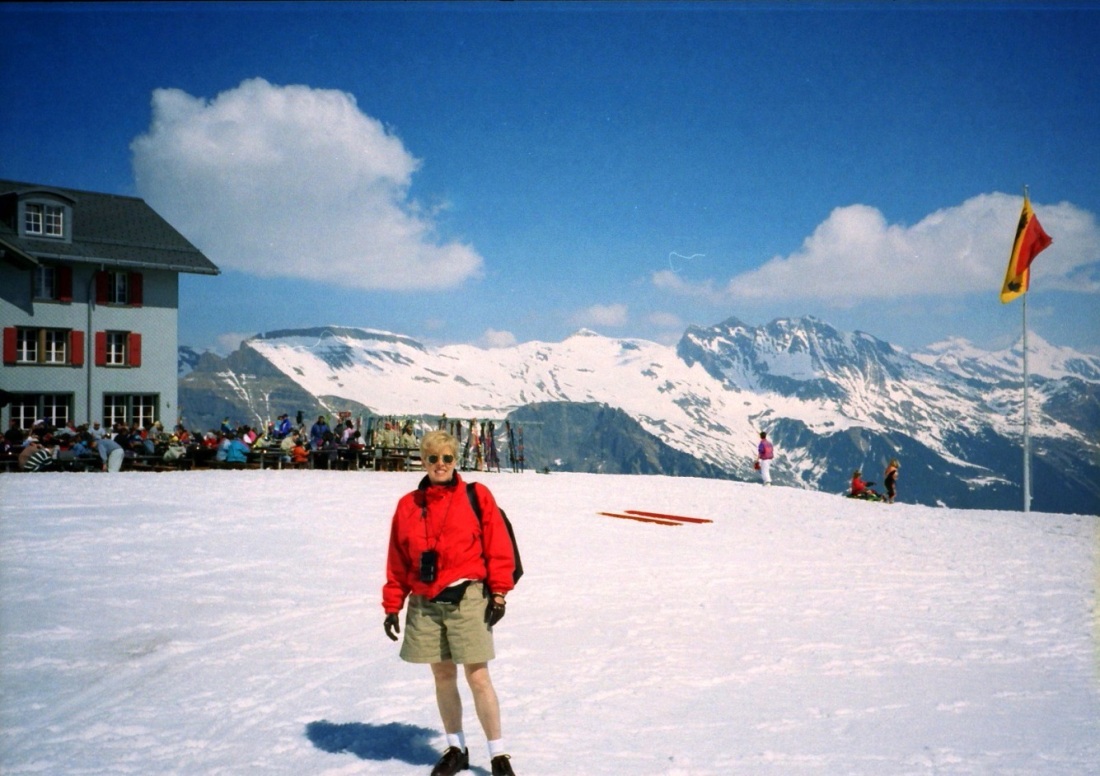 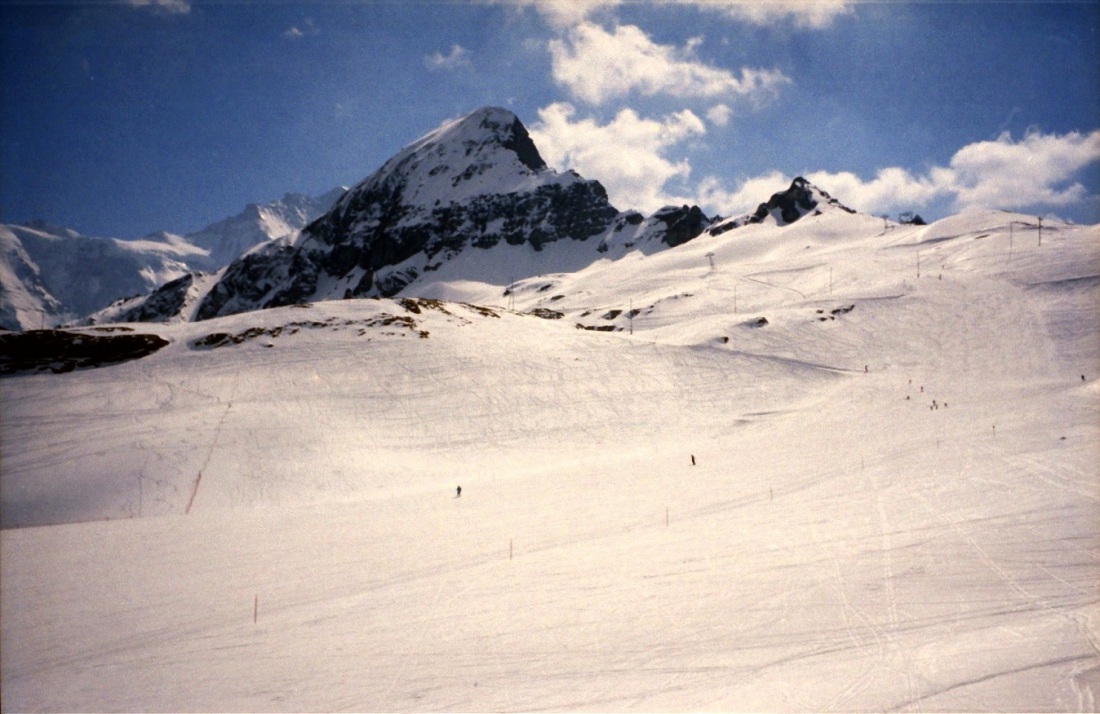 [Another favorite photo with view of altitudes above and below . . . ] 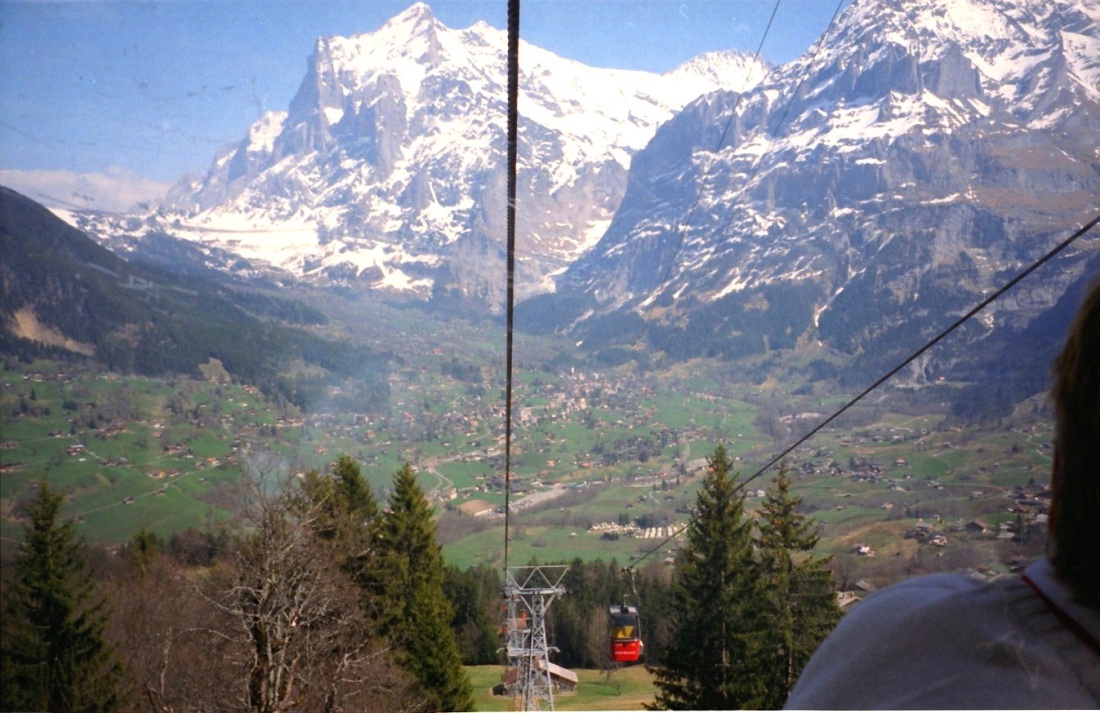 [Interlaken (between lakes) is a Swiss town and municipality in the canton of Bern.  It is an important and well-known tourist destination in the Bernese Highlands, and the main transport gateway to the mountains and lakes of that region.  The town is located on the flat alluvial land called Bodeli between two lakes, Brienz to the east and Thun to the west, and alongside the river Aare, which flows between them.  Interlaken is the central town of a Small Agglomeration with the same name of 23,300 inhabitants.  The official language of Interlaken is (the Swiss variety of Standard) German, but the main spoken language is the local variant of the Alemannic Swiss German dialect (Wikipedia).]

[It’s too bad that a lot of the photos from this trip got “shuffled” on the disc, and after all this time I’m not sure of their proper order.  Anyway, this appears to still be in the Jungfrau?]

[My first parachute jump.  I heard I was doing great until I hit the Matterhorn . . . ] 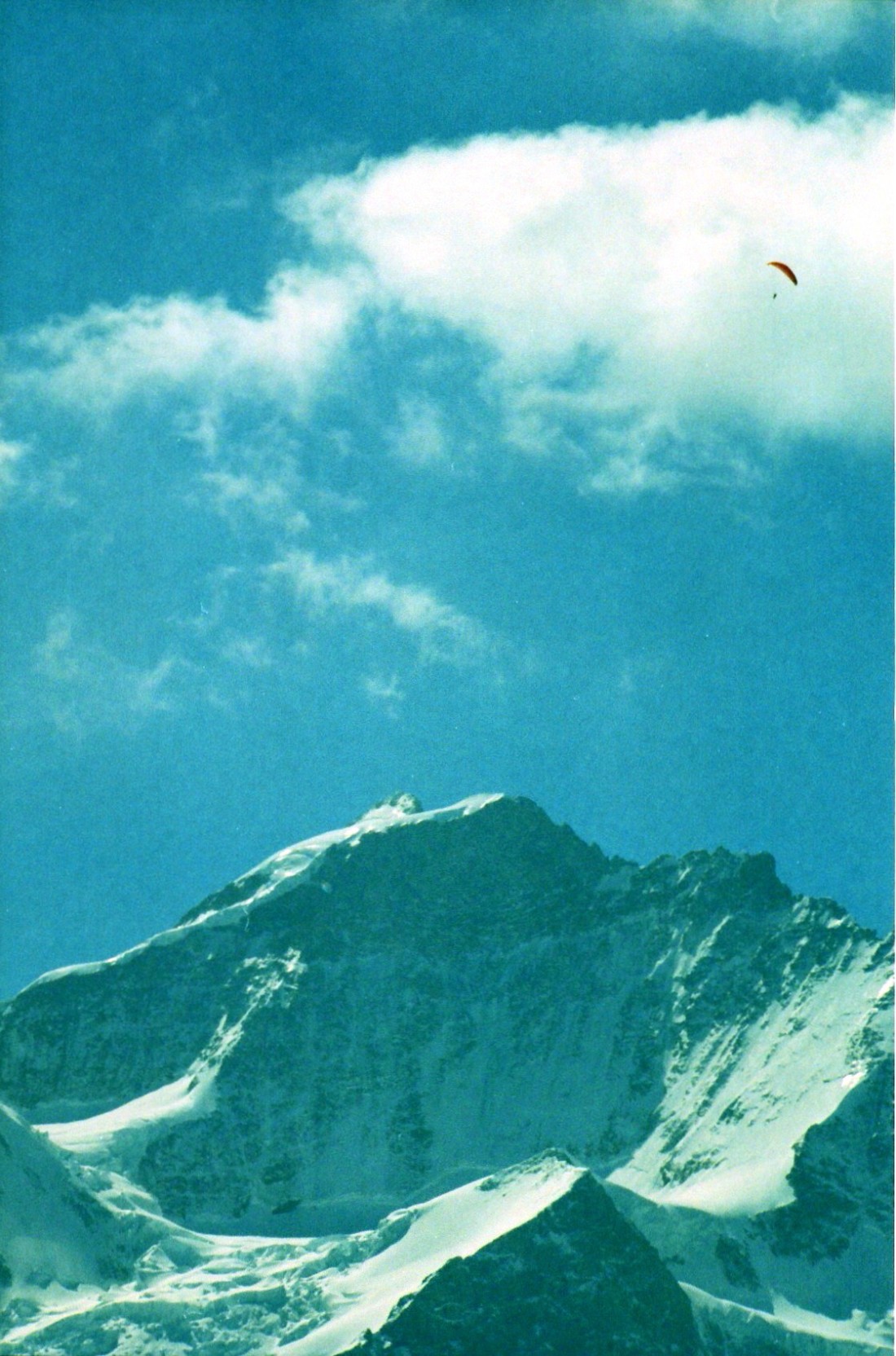 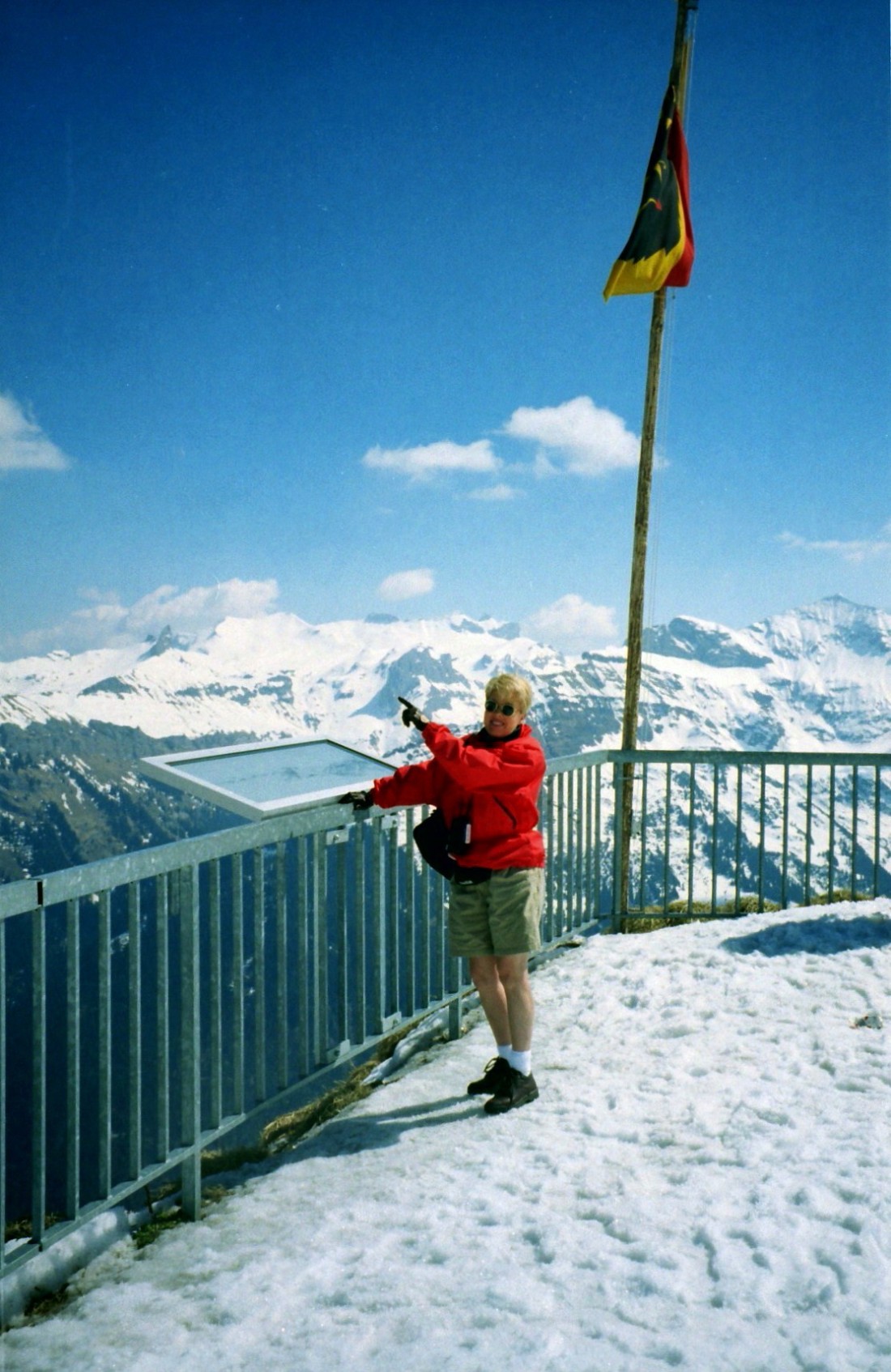 [The Matterhorn is a mountain in the Alps, straddling the main watershed and border between Switzerland and Italy.  It is a large, near-symmetric pyramidal peak in the extended Monte Rosa area of the Pennine Alps, whose summit is 4,478 metres (14,692 ft) high, making it on of the highest summits in the Alps and Europe.  The four steep faces, rising above the surrounding glaciers, face the four compass points and are split by ridges.  The mountain overlooks the Swiss town of Zermatt, in the canton of Valais, in the Aosta Valley to the south (Wikipedia).] 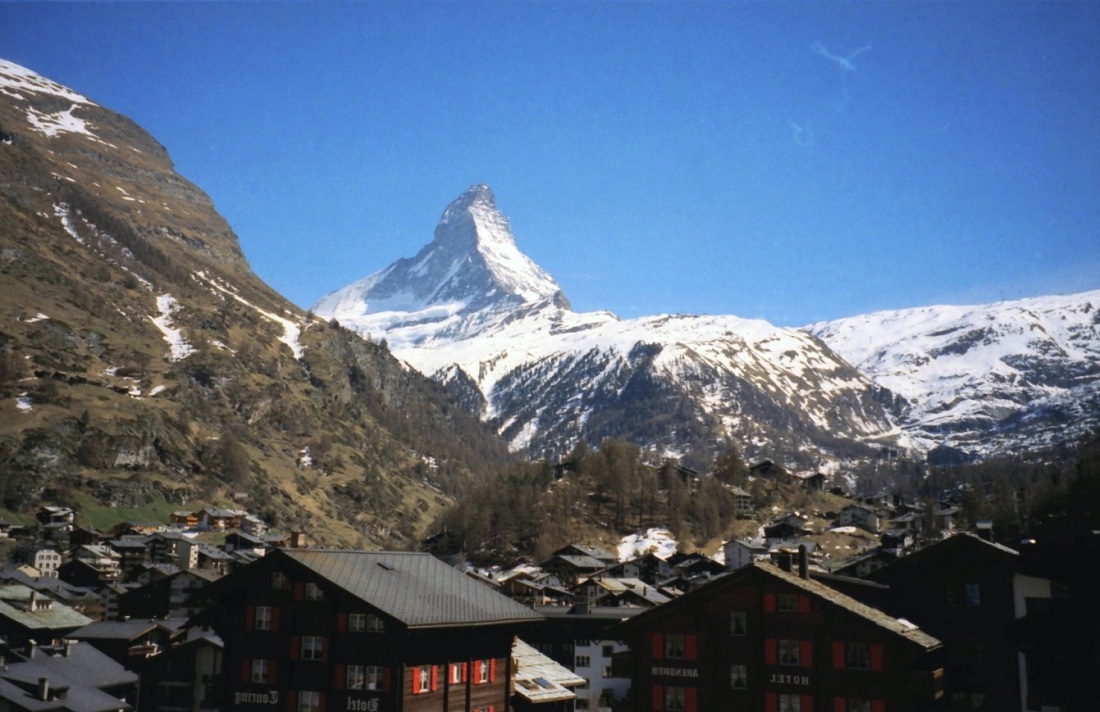 [I was told how lucky I was to have such a clear day for photos (so I took lots), that usually the summit is hidden by clouds 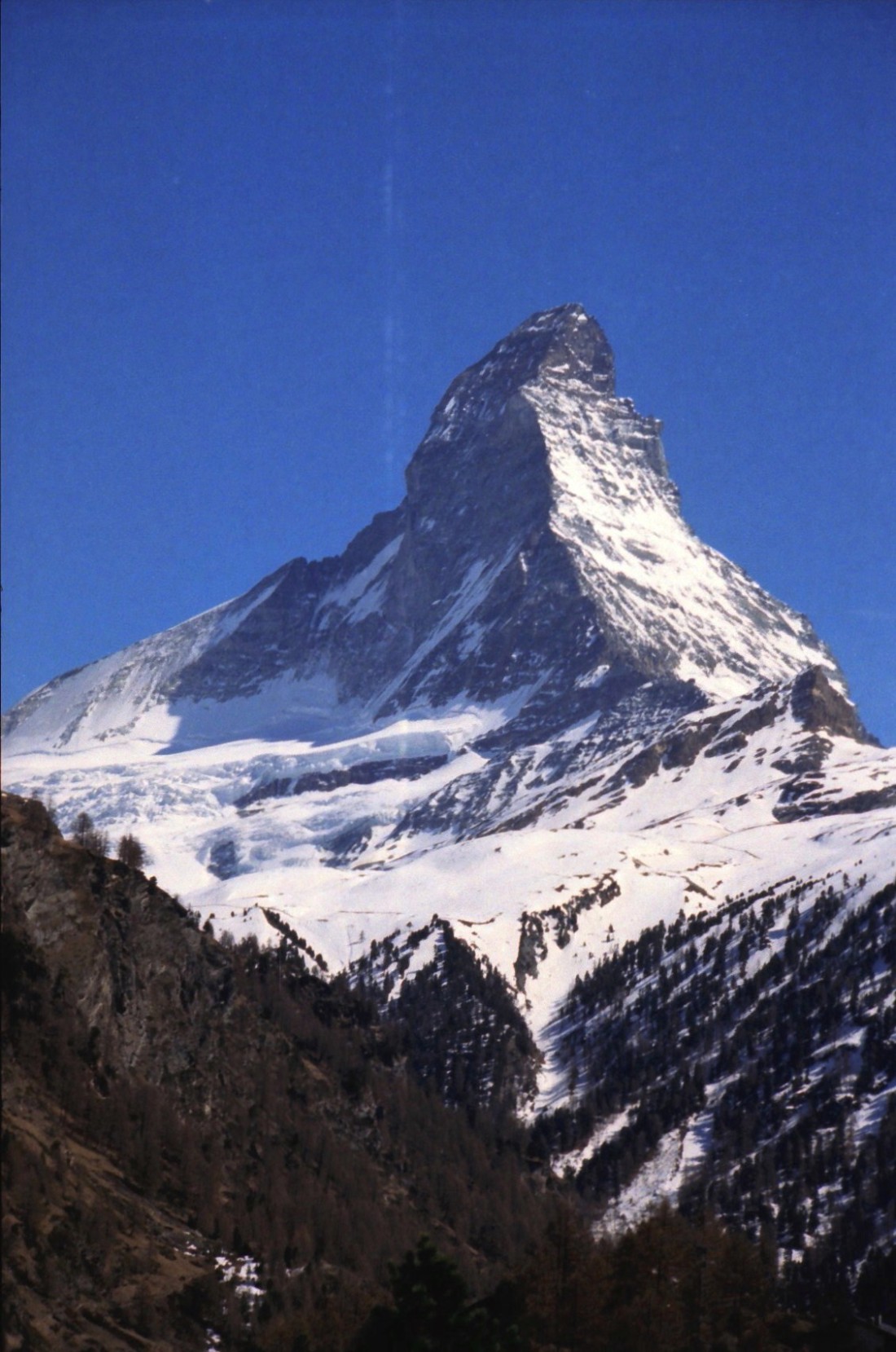 I don’t like Switzerland; it has produced nothing but theologians and waiters.  ~  Oscar Wilde

[The Gornergrat train goes from the village centre in Zermatt to Gornergrat (3,089 m) in 33 minutes.  From this vantage point, one of the most beautiful mountain panoramas in the world opens up – with a view of the Matterhorn (4,478 m) (zermatt.ch).]

[Zermatt is a municipality in the German-speaking section of the canton of Valais in Switzerland.  It has a population of about 5,800 inhabitants.  It lies at the upper end of Mattertal at an elevation of 1,620 m (5,310 ft), at the foot of Switzerland’s highest peaks (Wikipedia).]

Switzerland is a curst, selfish, swinish country of brutes, placed in the most romantic region of the world.  ~  Lord Byron 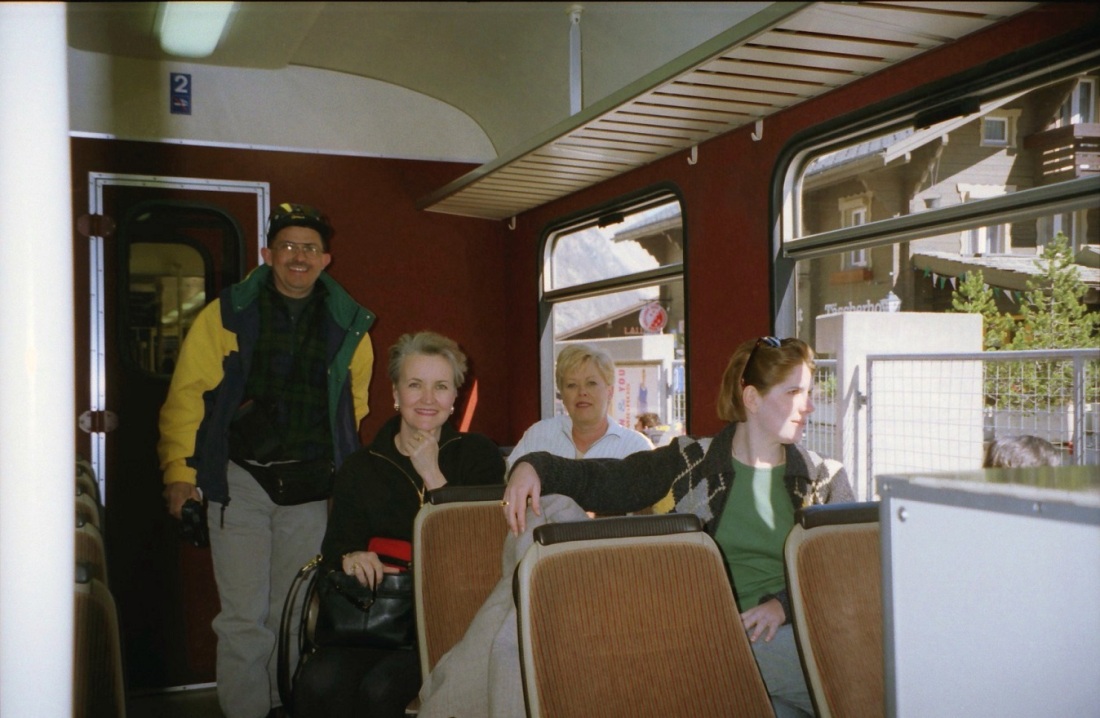 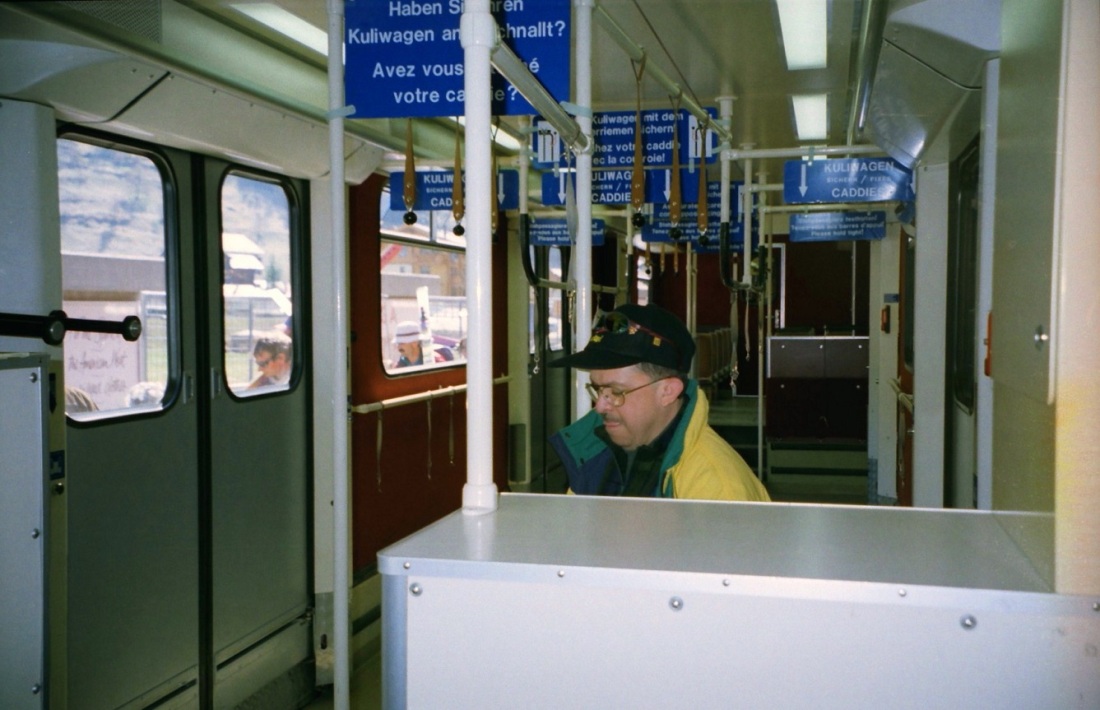 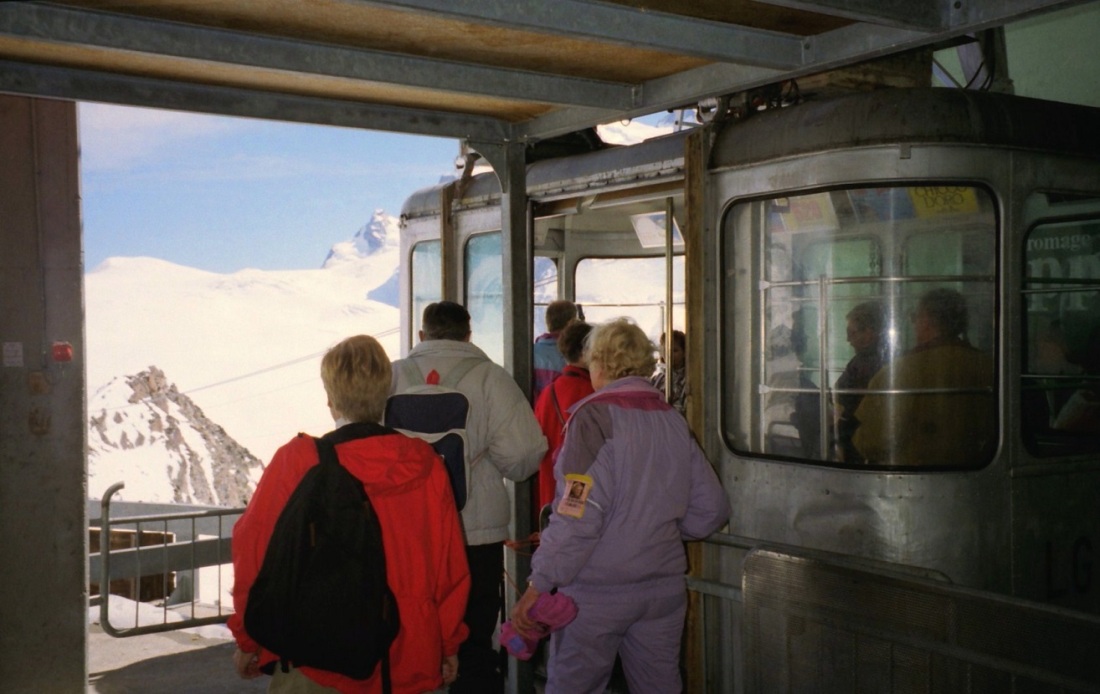 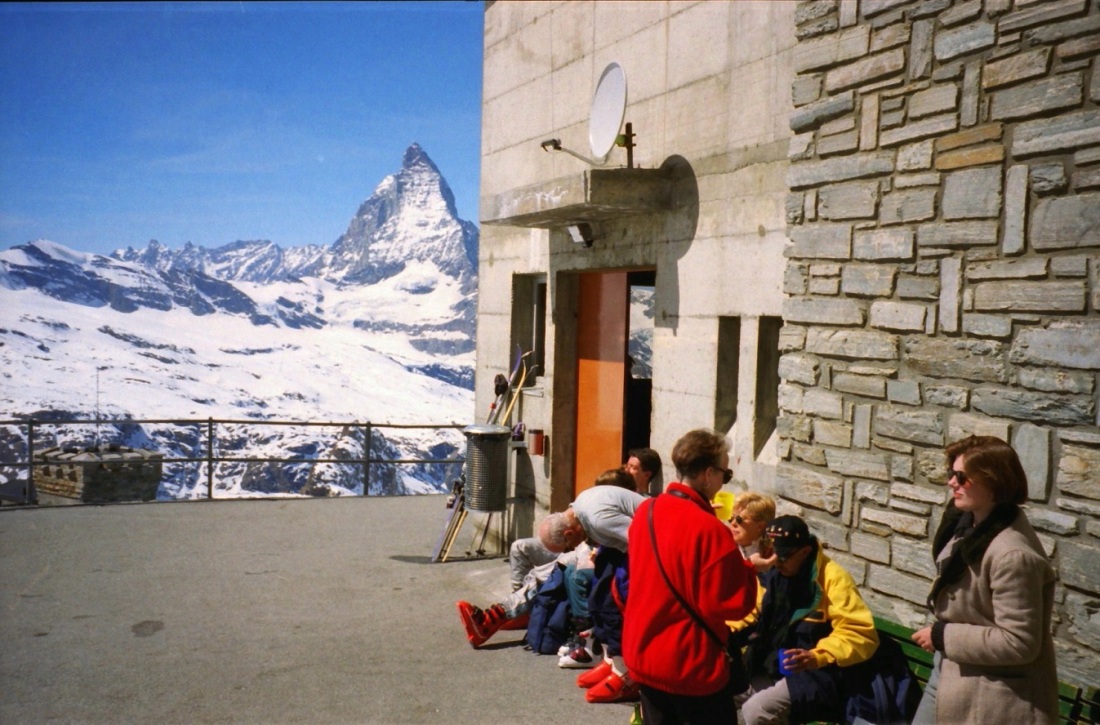 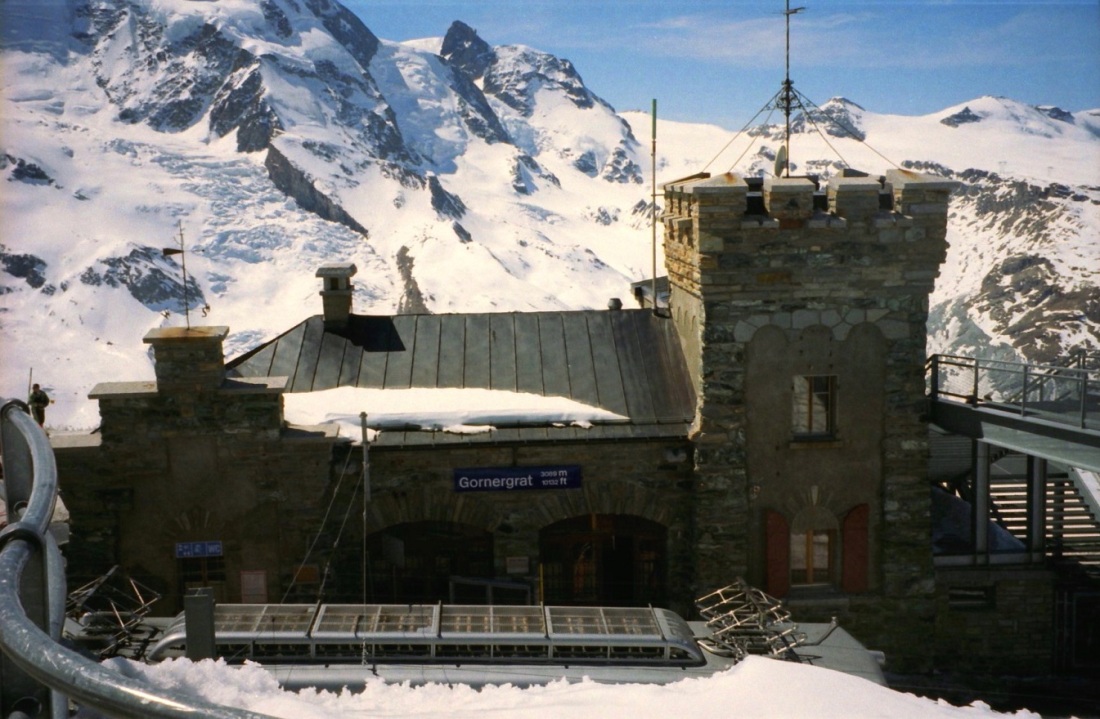 [In the late 1960s two astronomical observatories were installed in the two towers of the Kulmhotel Gornergrat. The project ‘Stellarium Gornergrat’ is hosted in the Gornergrat South Observatory (Wikipedia).] 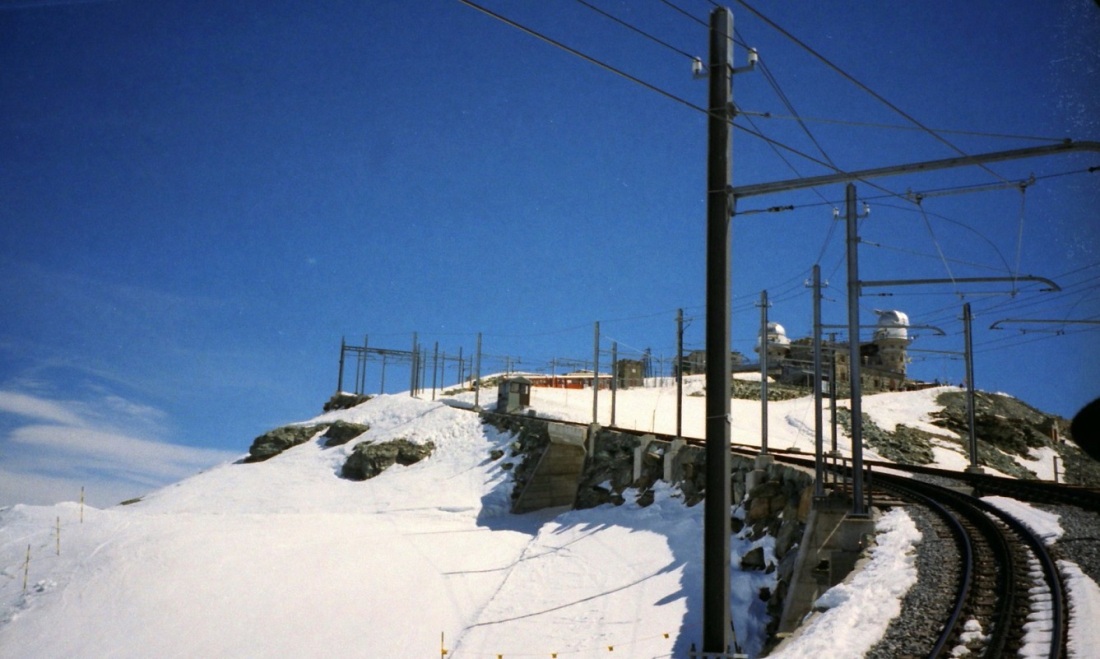 [The above photo was actually the last.  But I made this the last because it will be the display photo for Facebook, featuring the three stars of the day: The Super, The Matterhorn, and Roy!]

Switzerland is simply a large, lumpy, solid rock with a thin skin of grass stretched over it.  ~  Mark Twain